I've been many times to Yant Flats. Sunrise, sunset, during the day, but I've never been out here at night. One of the things I really wanted to do for a long time was to spend the night out there and shoot the area with some stars.
August came and despite being in the midst of monsoon season, there were a few days that looked pretty promising. The moon cycle also cooperated and the moon wouldn't rise until 3 am in the morning.
I decided to give it a try. Because it is such a short hike in, I didn't start until later in the afternoon.
It was a hot day with temperatures above a hundred degrees and because of it, I decided to pack as light as possible. Just enough water, dinner, my camp chair, and a sleeping bag. I did not bring a tent or sleeping pad, the sandstone would be more than enough.
The drive from Hurricane was not super long and the road was in good condition with only a few ruts. I was the only one at the trailhead. It was pretty cloudy but I hoped the clouds would move out later today.
It was a pretty short hike but very sandy in some spots. I've never been a big fan of sandy trails but at least I knew that this one wasn't last for long.
After about 40 minutes I reached the rim of the area where you look down into the massive sandstone bowl of Yant Flats to the East. This was by far the best area to explore and I always preferred this part over the other part.
I descended down into the sandstone bowl and picked one of my favorite spots to start my exploration of the area. 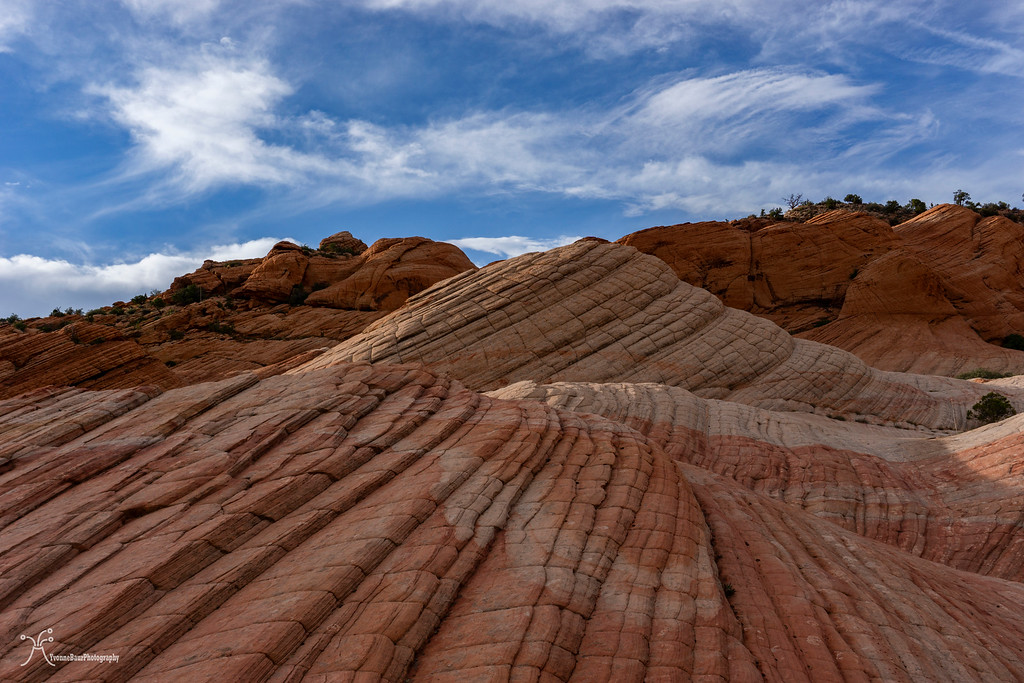 The entire area was created by massive Jurassic sand dunes piling up several hundred feet high. Once lithified into Navajo sandstone, Iron oxide provided the color variations. The variety of colors was just amazing, even after I've visited the area so many times.
The clouds were still hanging in the area and I hoped for a break around sunset to take advantage of all the colors. 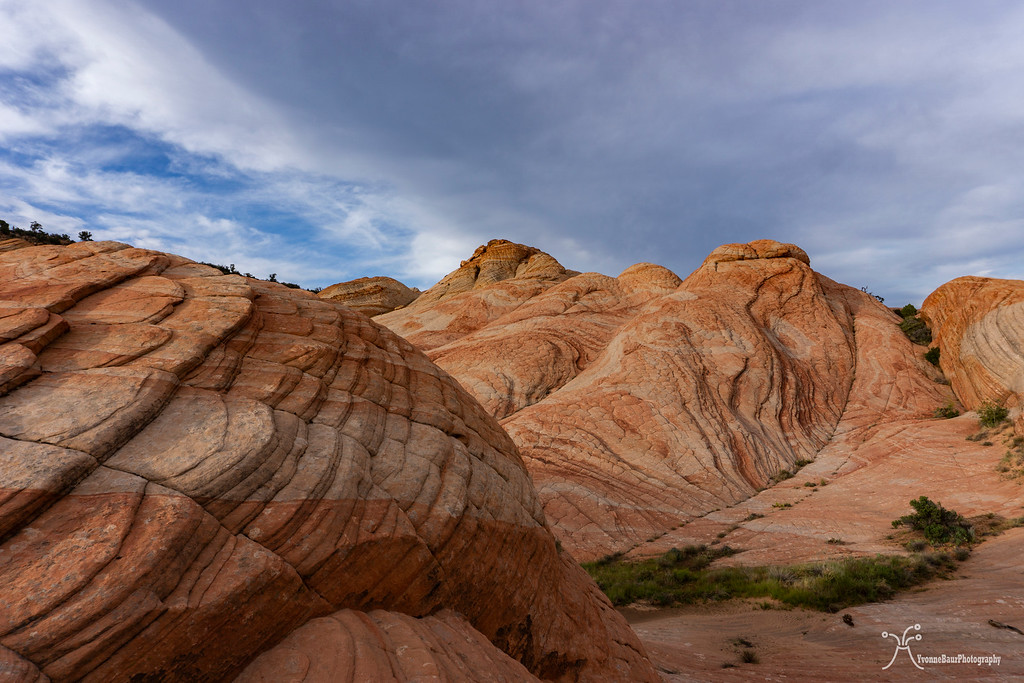 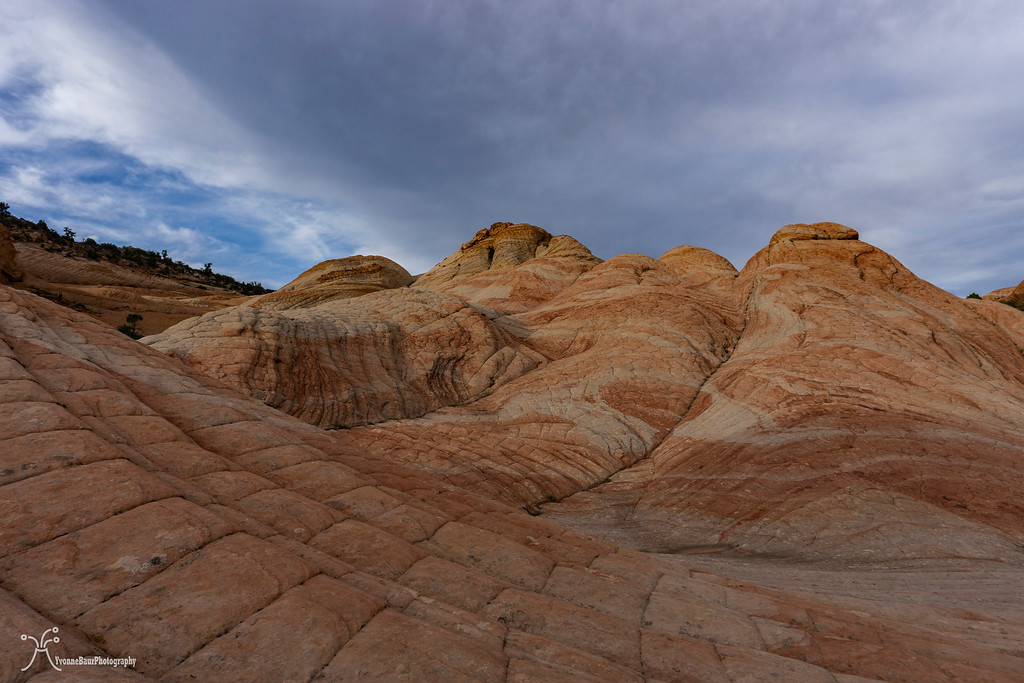 Closer to sunset I git a break in the clouds and I took advantage of it goofing around a bit and creating some selfie shots. 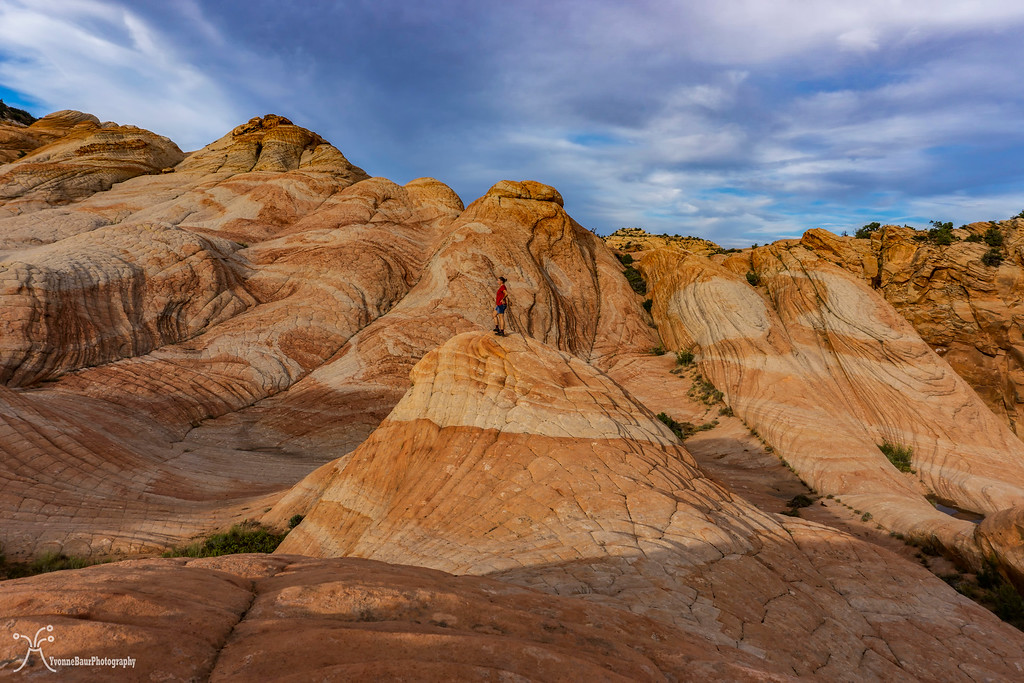 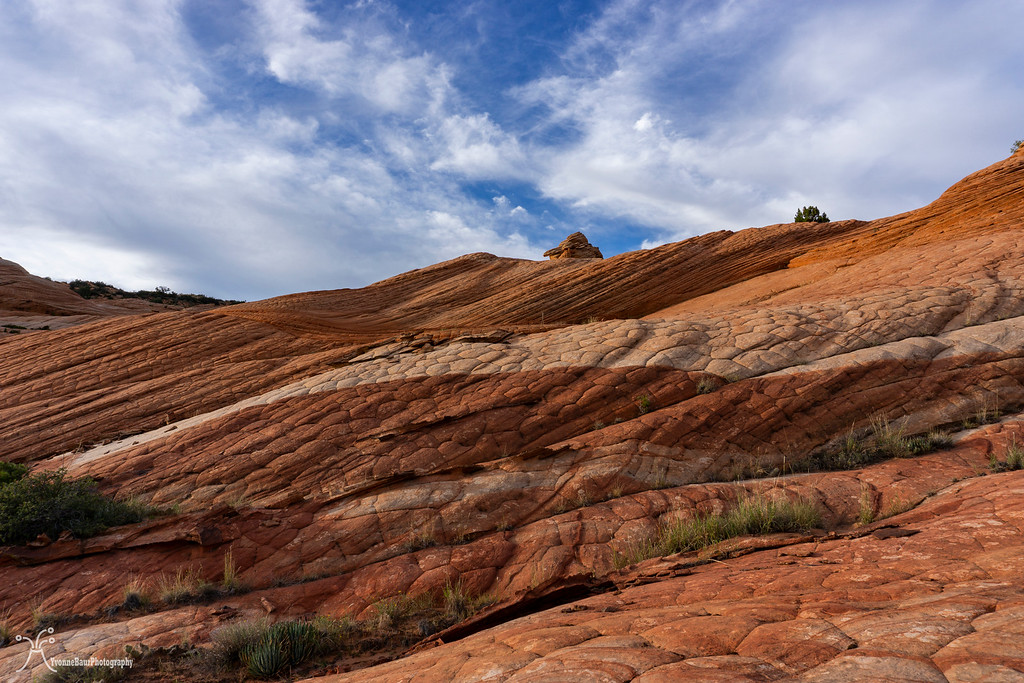 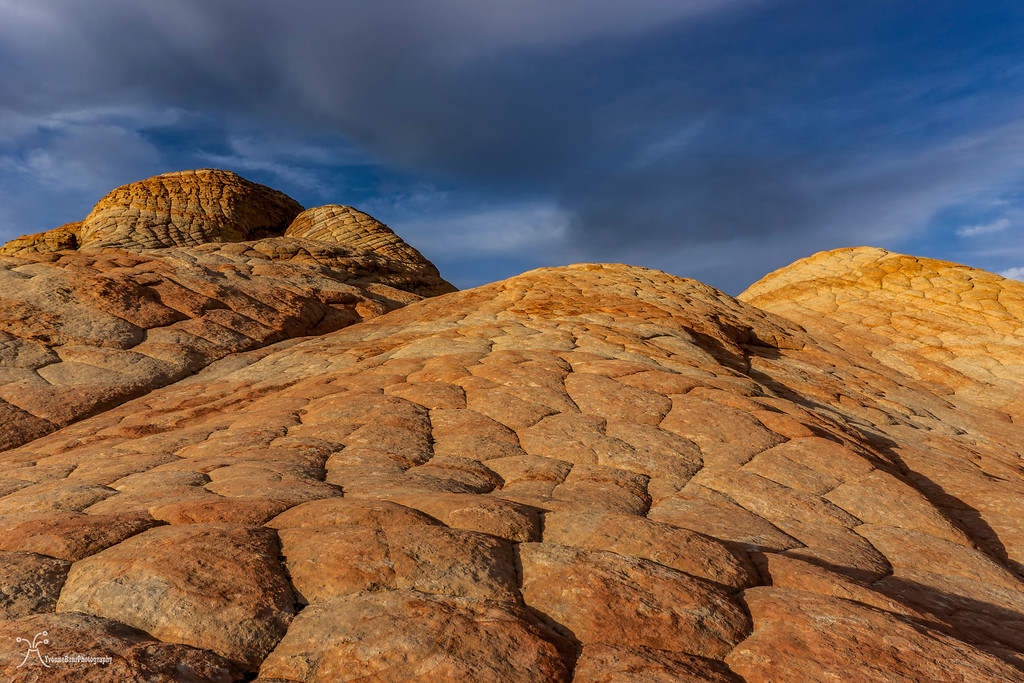 Around sunset, I still had quite a few clouds in the sky but it looked that it was slowly clearing out to the west. 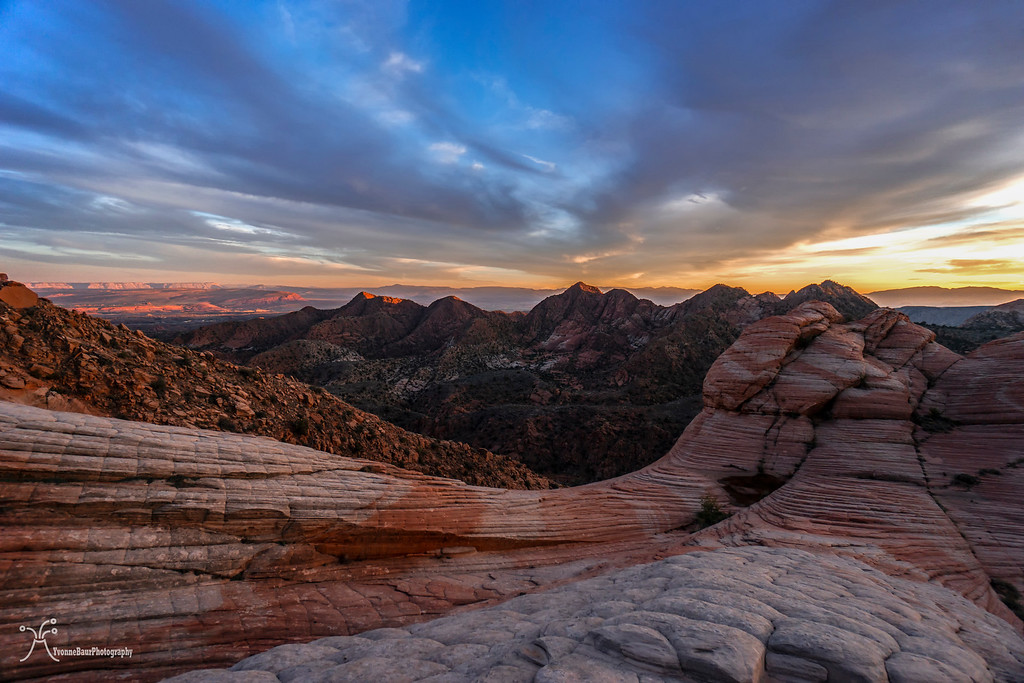 It wasn't the best sunset but I got some colors in the sky. 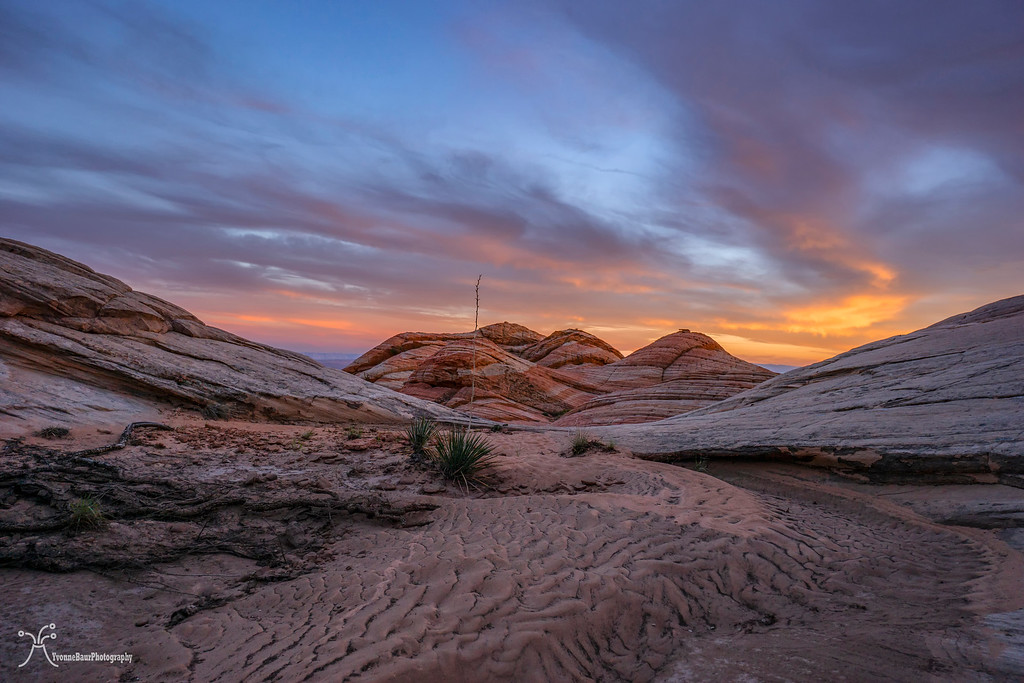 A bit after sunset I got a really intense afterglow that was well worth the wait.
It always surprised me how colorful it can get out here in the summertime. 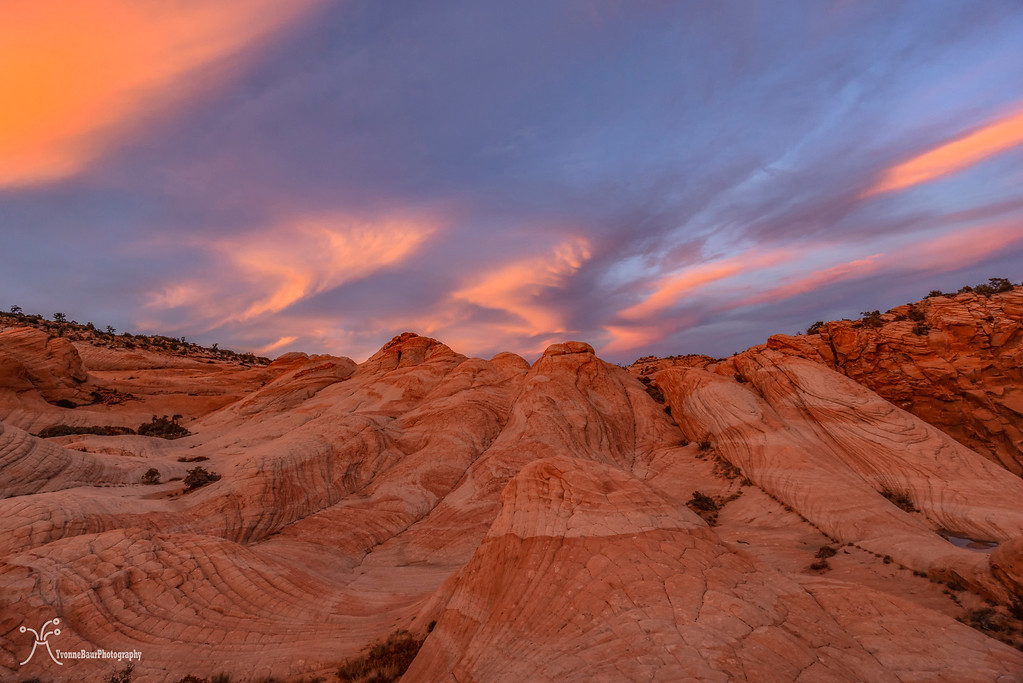 The afterglow lasted for quite a while and when it was finally over, I set up my camp right in the middle of the sandstone bowl, had a quick dinner, relaxed, reading a bit.
Then I was waiting for darkness to arrive. In the distance, I could hear coyotes and some owls and once in a while, a light breeze went through the area.
It was a beautiful night and gradually it cleared out.
Finally, it was dark enough and I set up my camera. 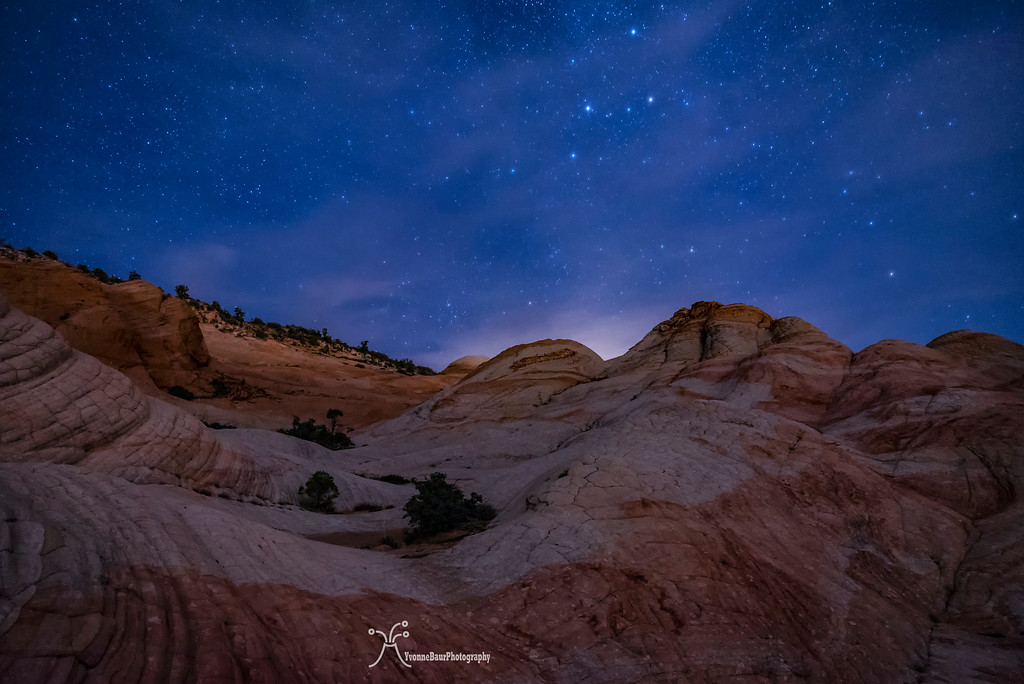 Since the lights from St. George reflected on the sandstone, I did not need to do any light painting to light up the foreground. It actually worked pretty well into my favor. 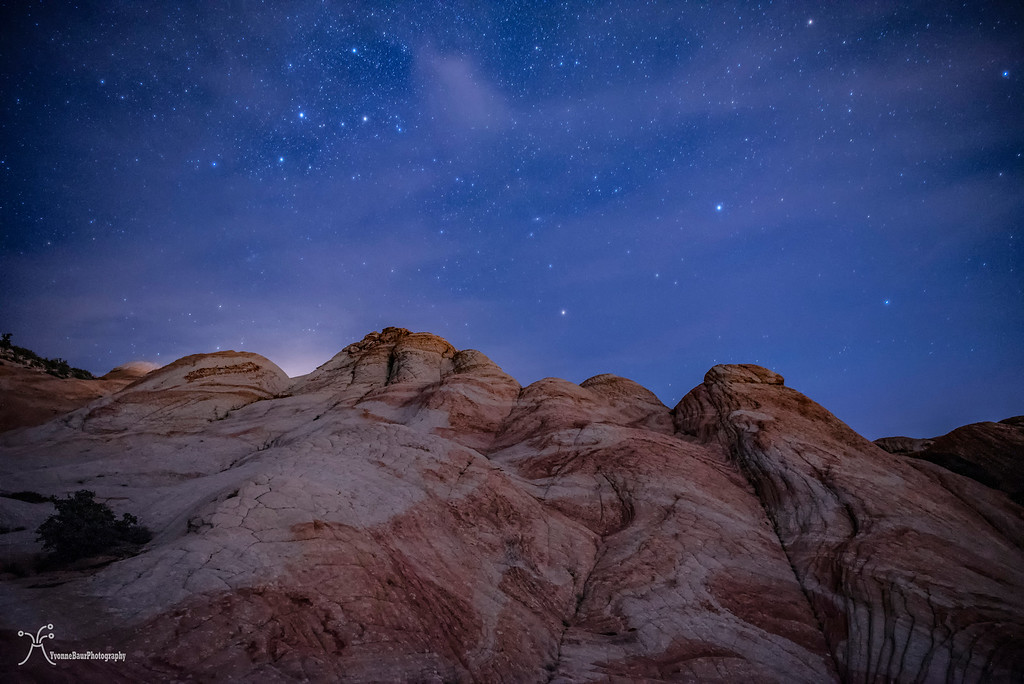 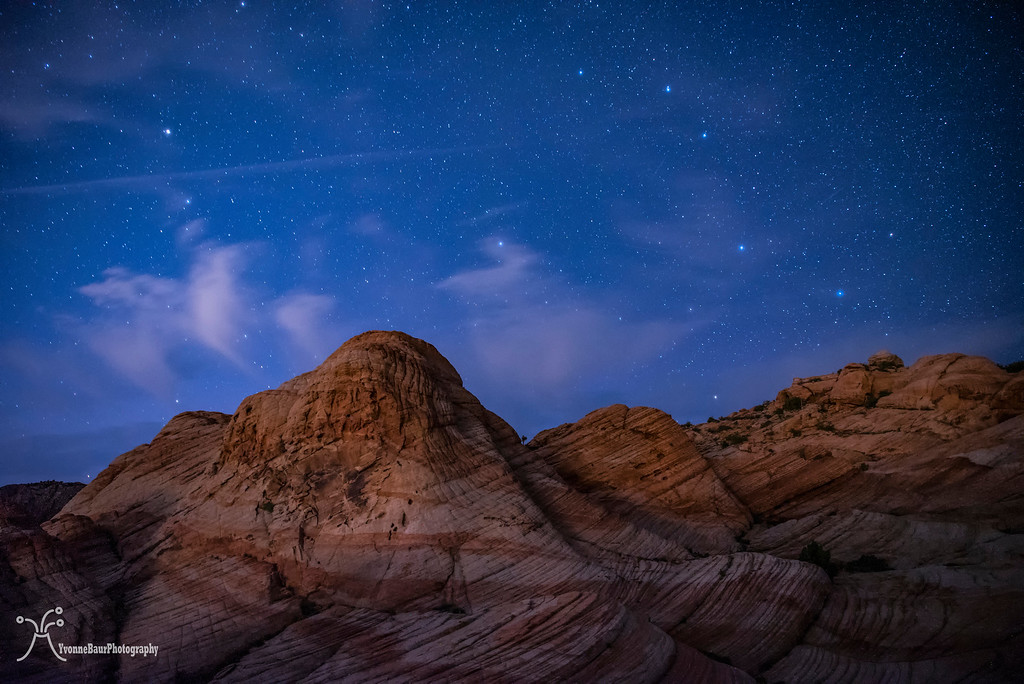 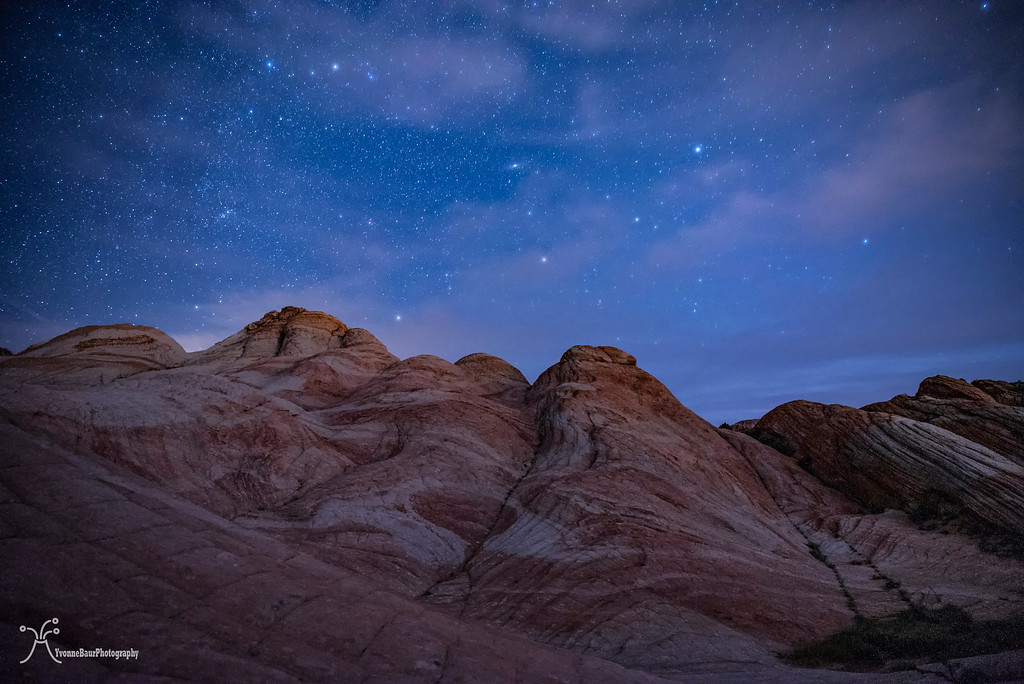 It was pretty cool and I enjoyed the time shooting before the moon was rising.
The night was warm and I slept most of the time on top of my sleeping bag. The sandstone had conserved some of the heat of the day as well and reflected it off right now. At one point I fell asleep and woke up shortly before sunrise. 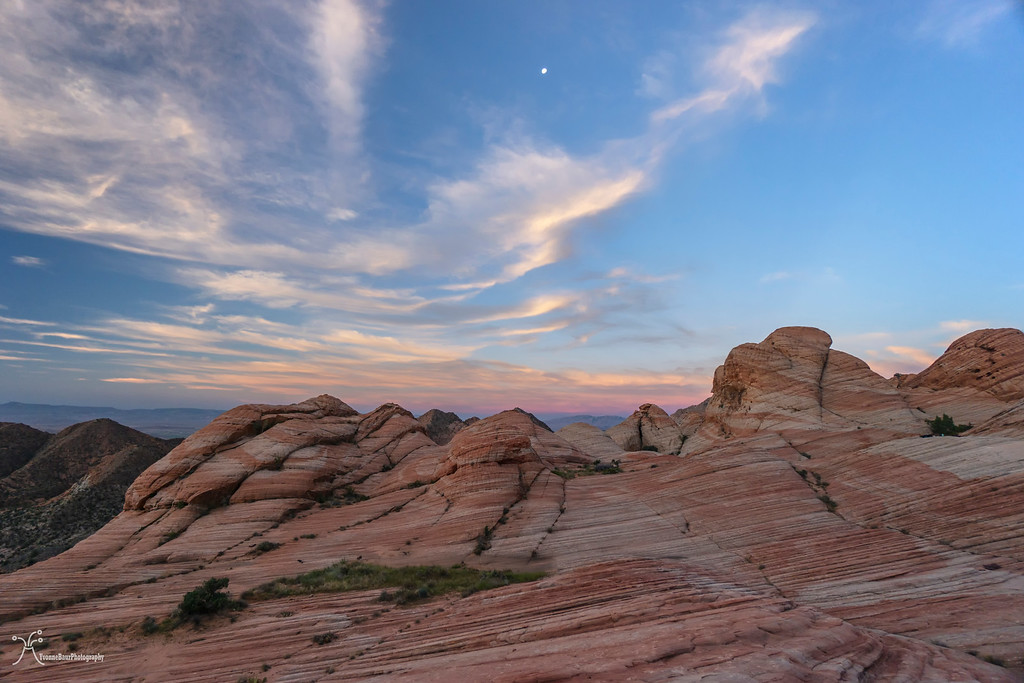 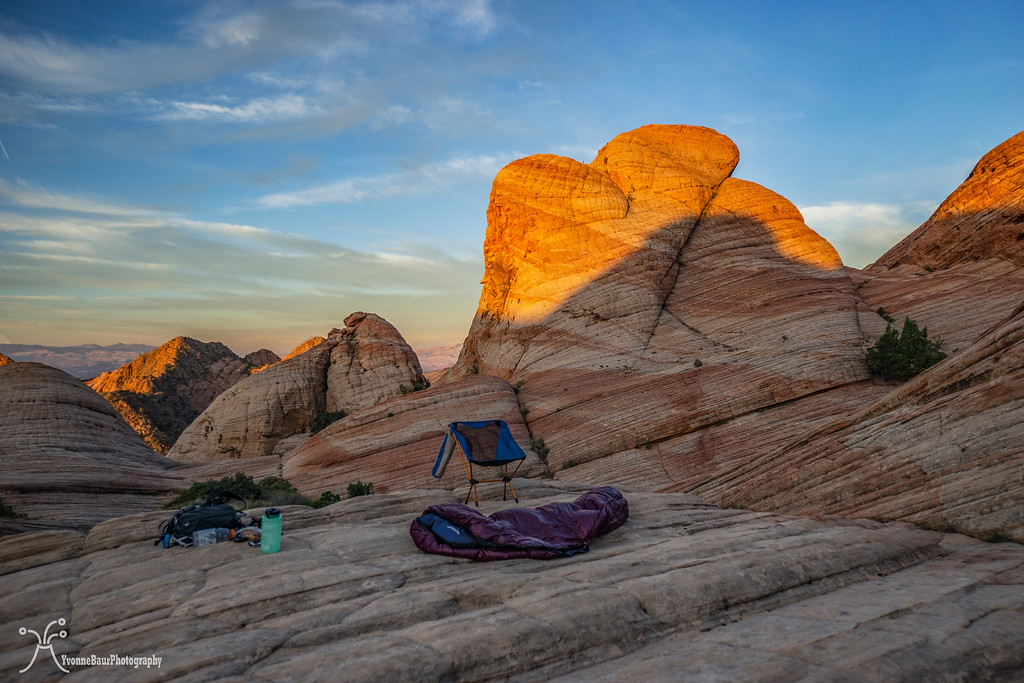 my camp in early morning light 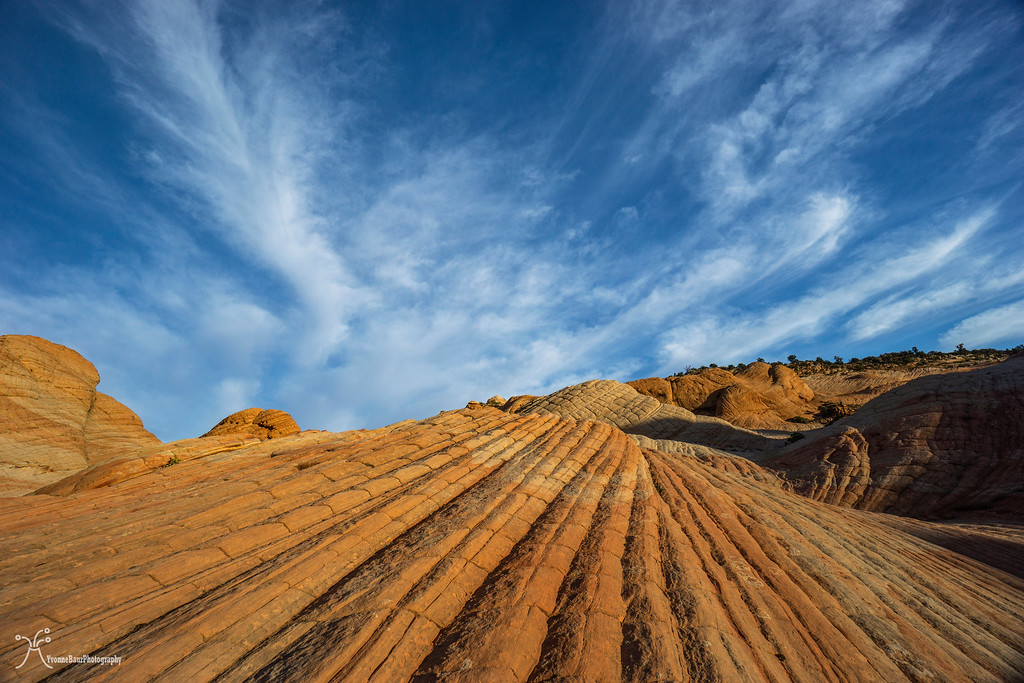 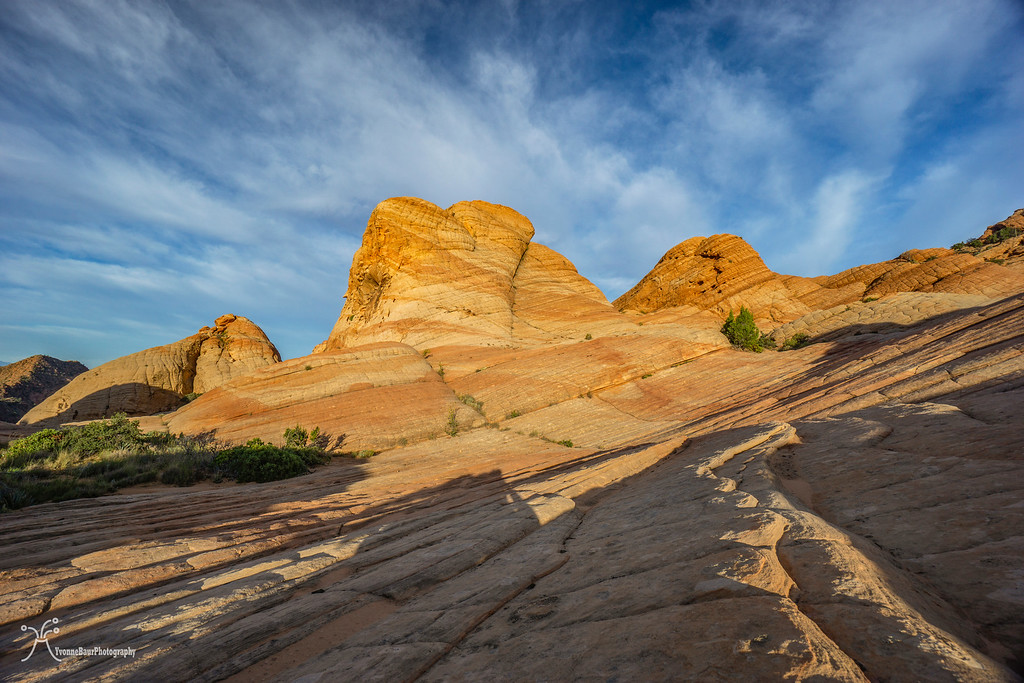 I packed up everything and hiked back to my car. It was still nice and cool and I reached the trailhead pretty fast.
It was a fun trip and I definitely want to do it again in the future.
http://yvonnebaurphoto.smugmug.com/

Beautiful photos, as always @Yvonne - thanks for sharing. What a great idea at the end of a hot day in August! Yant Flats is still on our list.
So... any night/evening critters to worry about in August? Do you have scorpions in that area?

Titans said:
Beautiful photos, as always @Yvonne - thanks for sharing. What a great idea at the end of a hot day in August! Yant Flats is still on our list.
So... any night/evening critters to worry about in August? Do you have scorpions in that area?
Click to expand...

you'll like the area, I always try to go at least 3-4 times a year. I will definitely go overnight again

We do have scorpions and other critters but I didn't see any inside Yant Flats. Scorpions like sandy spots, not rocks.
I felt completely safe out there.
http://yvonnebaurphoto.smugmug.com/

Just breathtaking! As always!
Thanks for sharing with us!

Miya said:
Just breathtaking! As always!
Thanks for sharing with us!
Click to expand...

You and Bobby need to check it out one day.

Awesome photo's Yvonne! Well done!
There is no path to happiness: happiness is the path

Those are some great photos! Thanks for sharing
You must log in or register to reply here.
Similar threads