Ever since reading the following article in Backpacker magazine, I've wanted to check out the Red Desert that spans southcentral Wyoming, northwest Colorado and Dinosaur National Monument in Utah. I found its remoteness, strange geology, herds of wild horses and pronghorn, and its history and prehistory to be very intriguing.

On Day One we drove north and east out of Grand Junction to Irish Canyon to check out the petroglyphs. 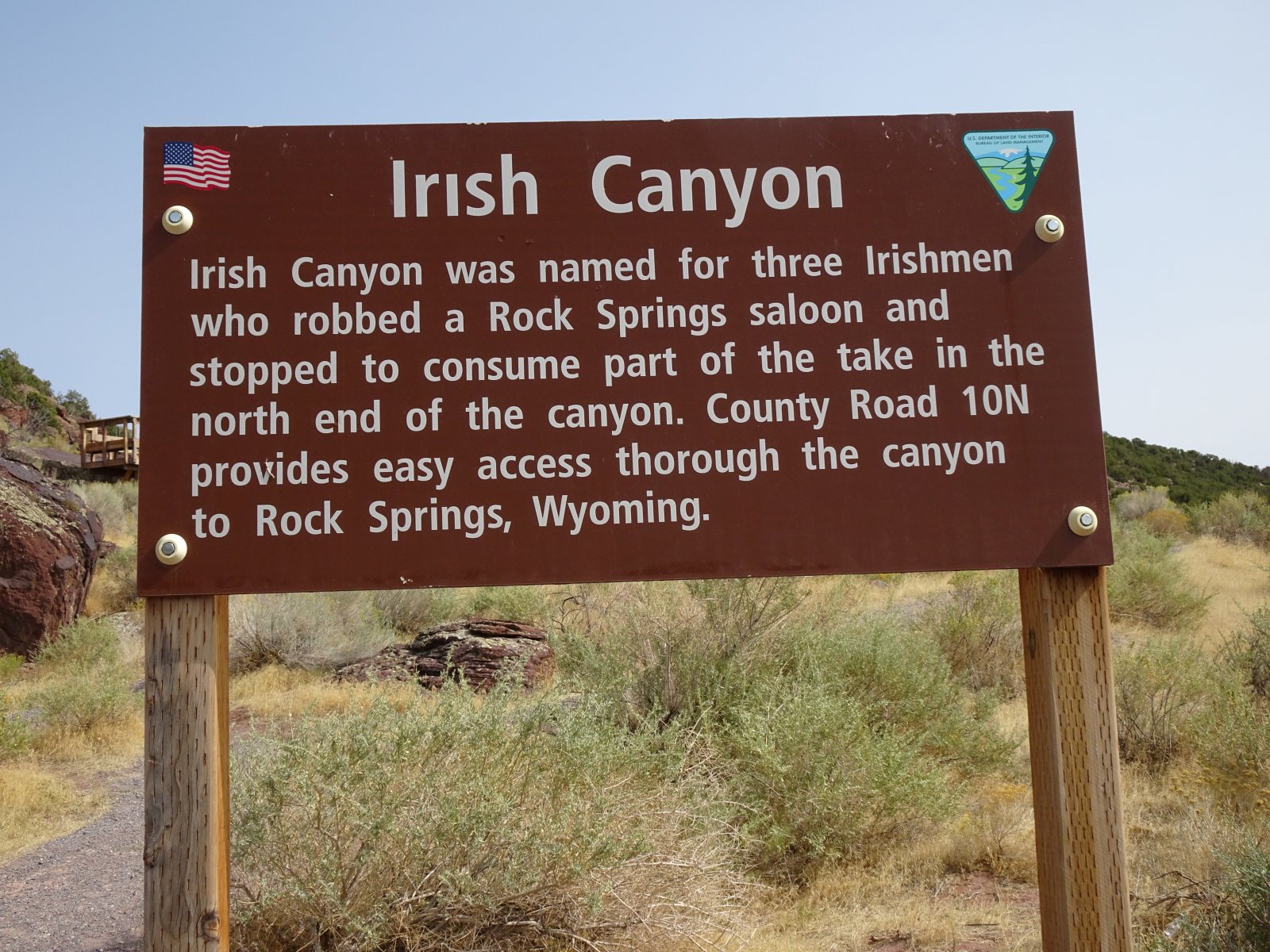 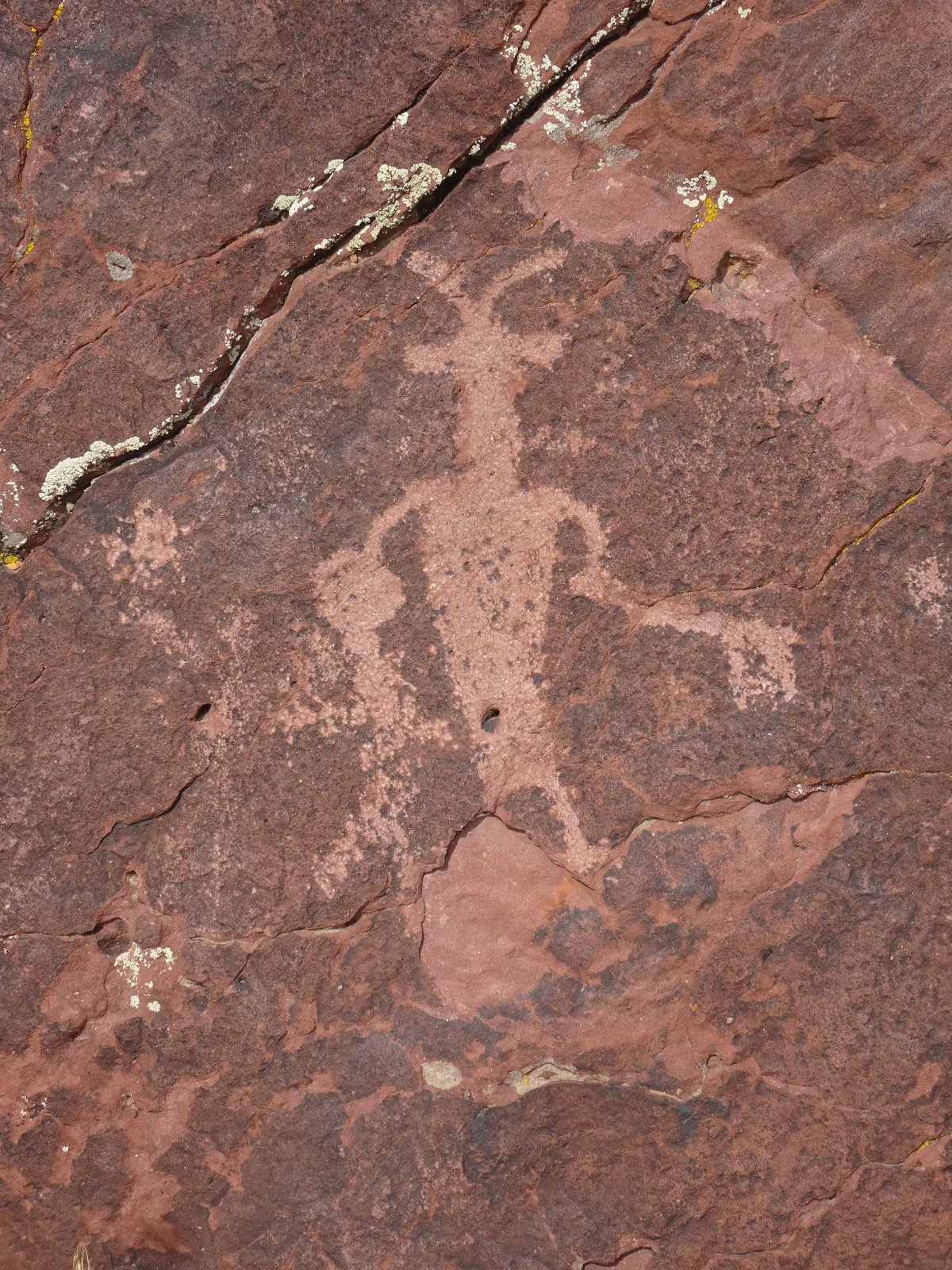 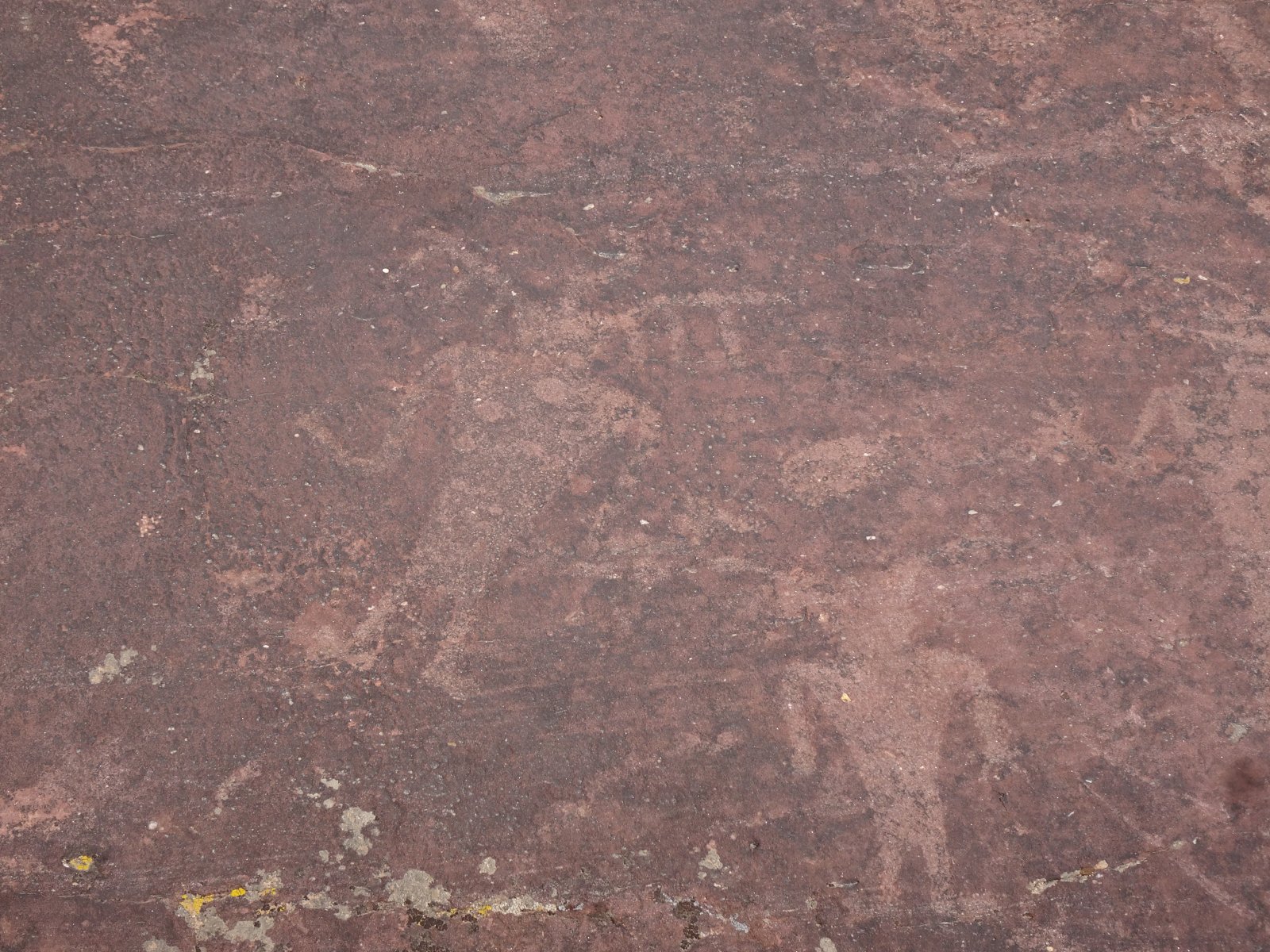 We camped nearby and the next morning packed up, drove a ways and hiked into a spectacular canyon with far more Fremont rock art.

Blake checking out a medicine wheel assumed to be constructed by the Shoshone: 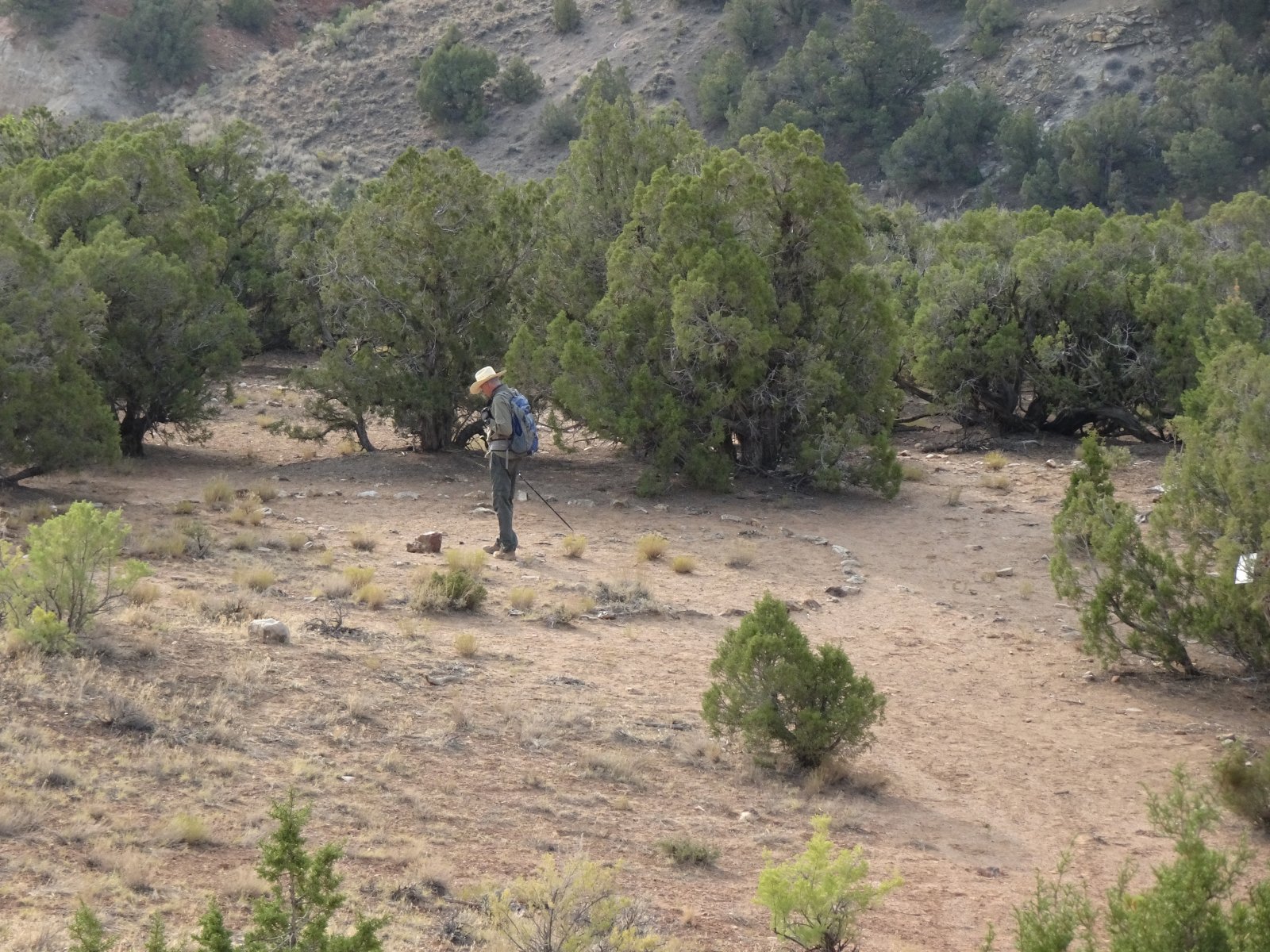 A closer view of the medicine wheel. Each of the four spokes are roughly aligned with the four cardinal directions and consists of 7 stones each. The stones are thought to perhaps represent Pleiades or the Big Dipper. It's not certain when this wheel was constructed nor its purpose, but various theories abound: 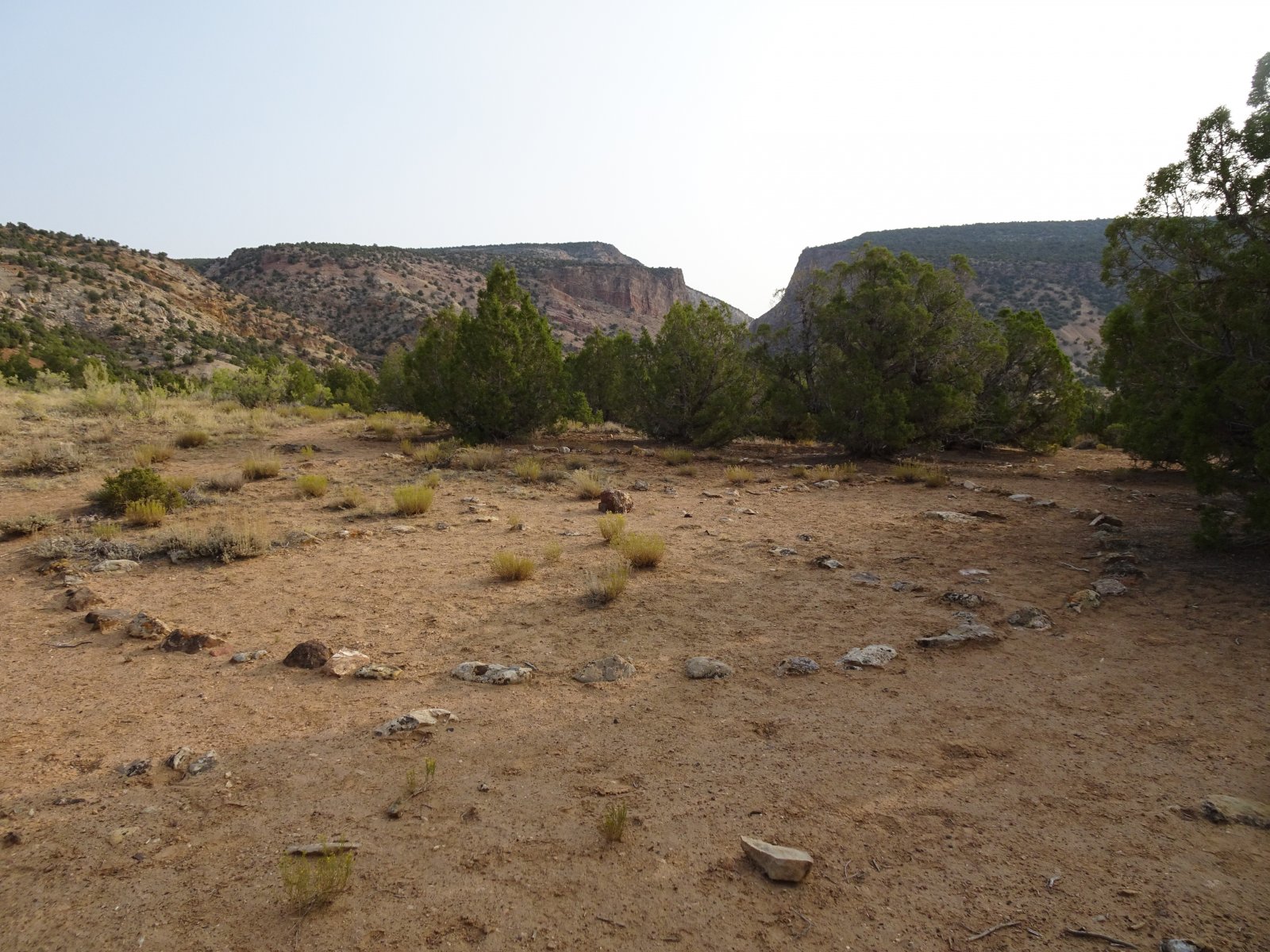 First view of the narrowing canyon. Unfortunately smoke in the air obscured a blue-sky-backdrop: 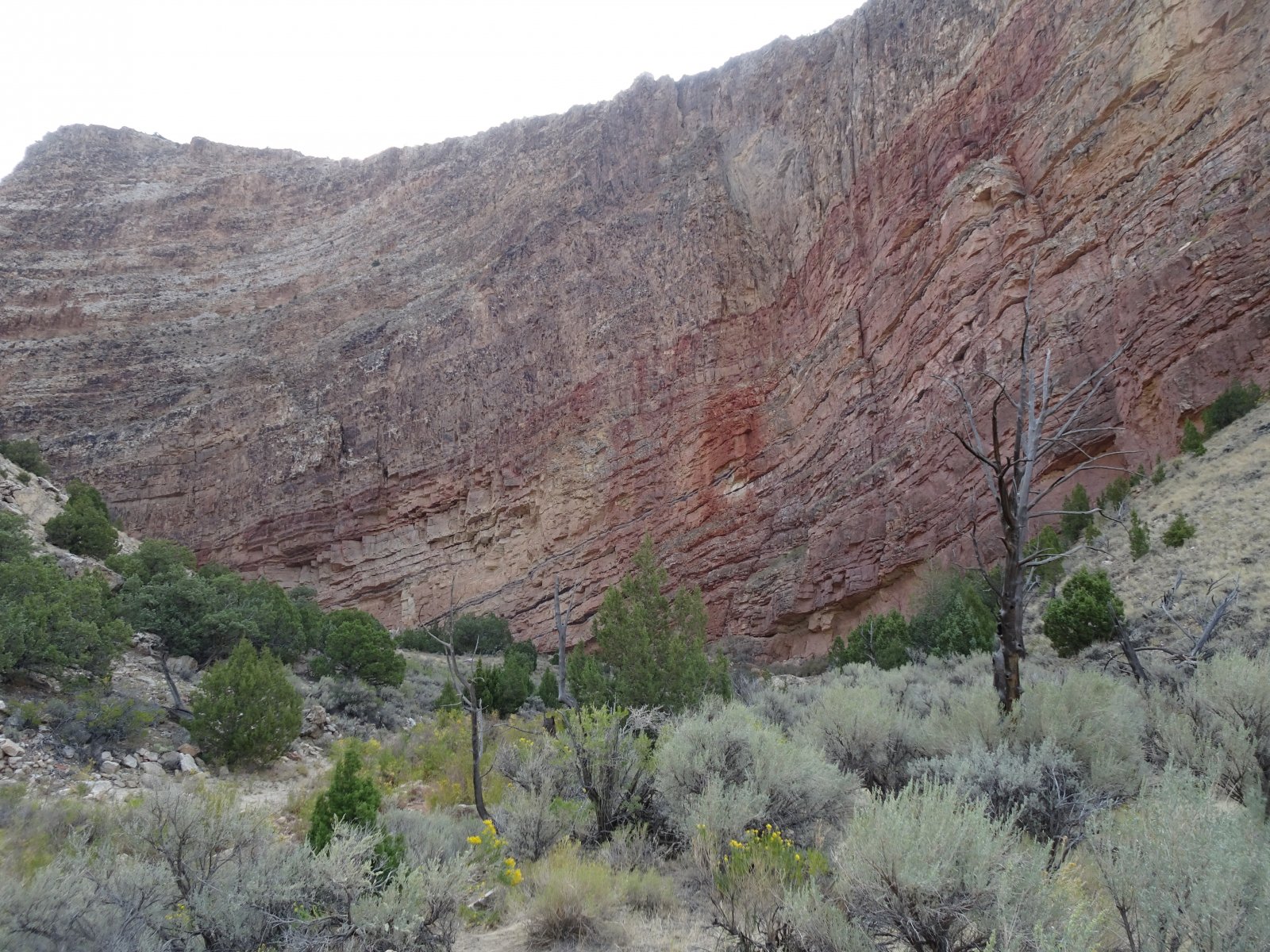 An obstacle to overcome to gain deeper access into the canyon. My choice was on the left, Blake's was on the right: 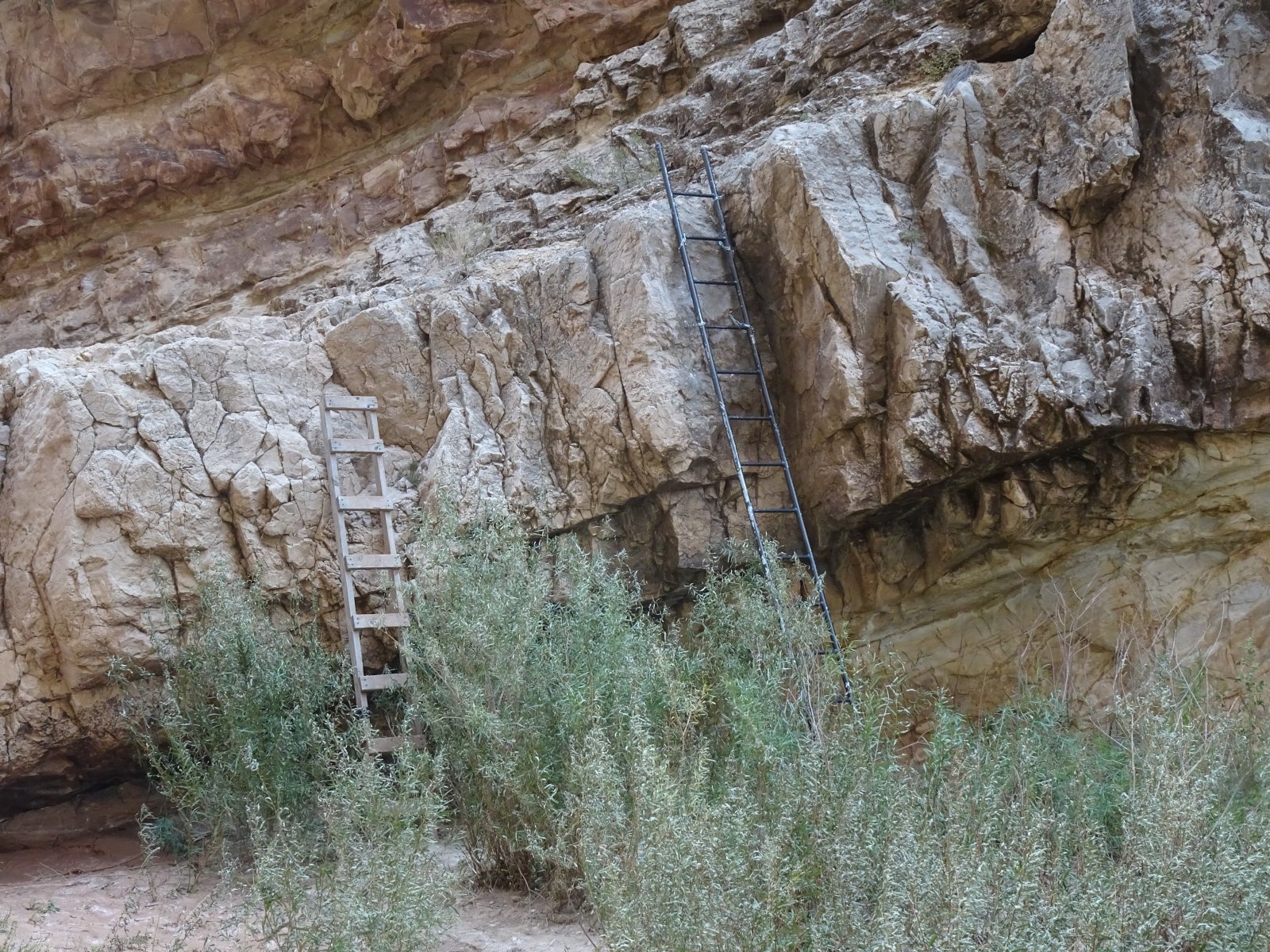 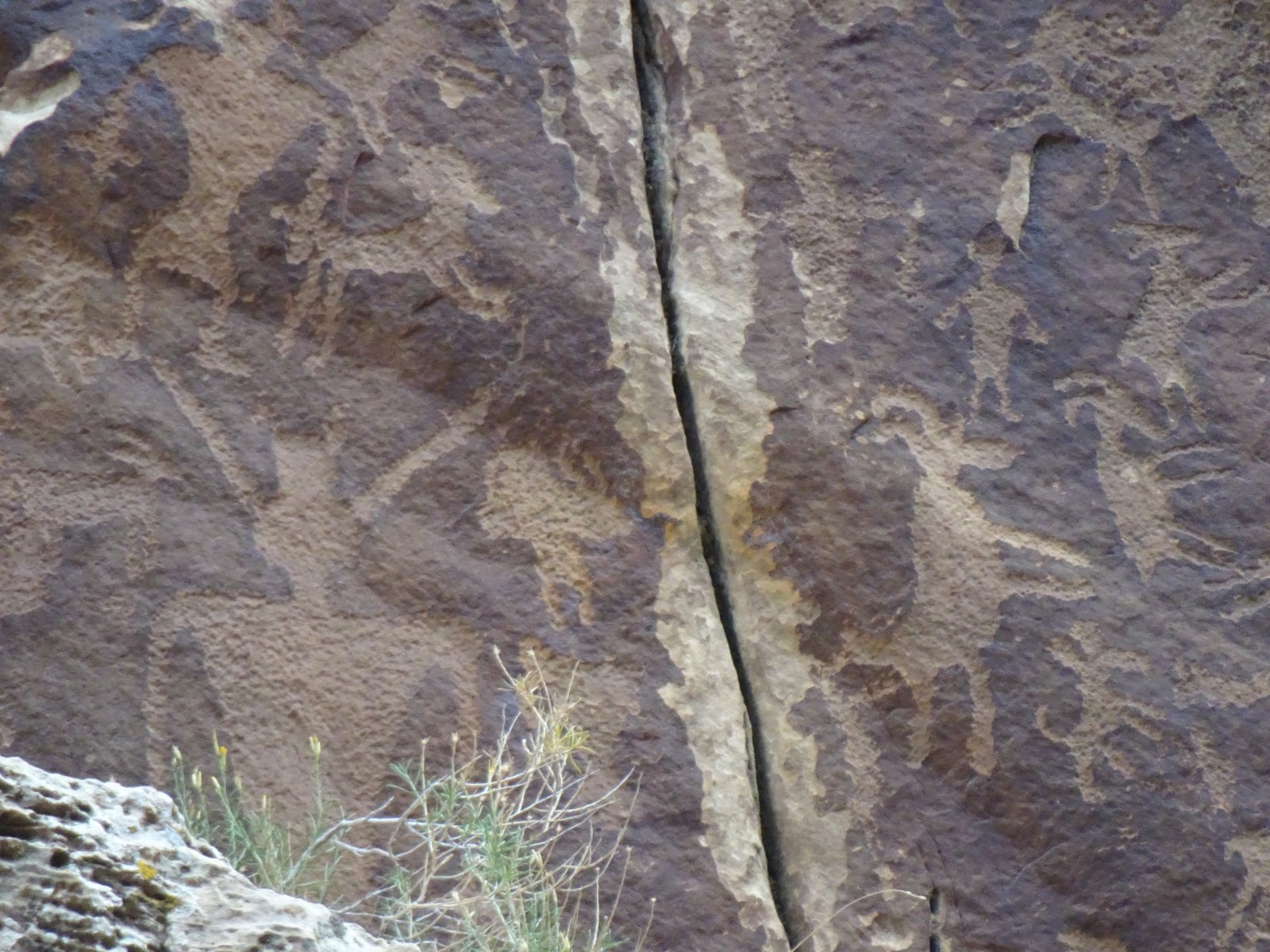 Notice a person inside a person. Not sure if this was intentionally done or if one figure was superimposed upon the other: 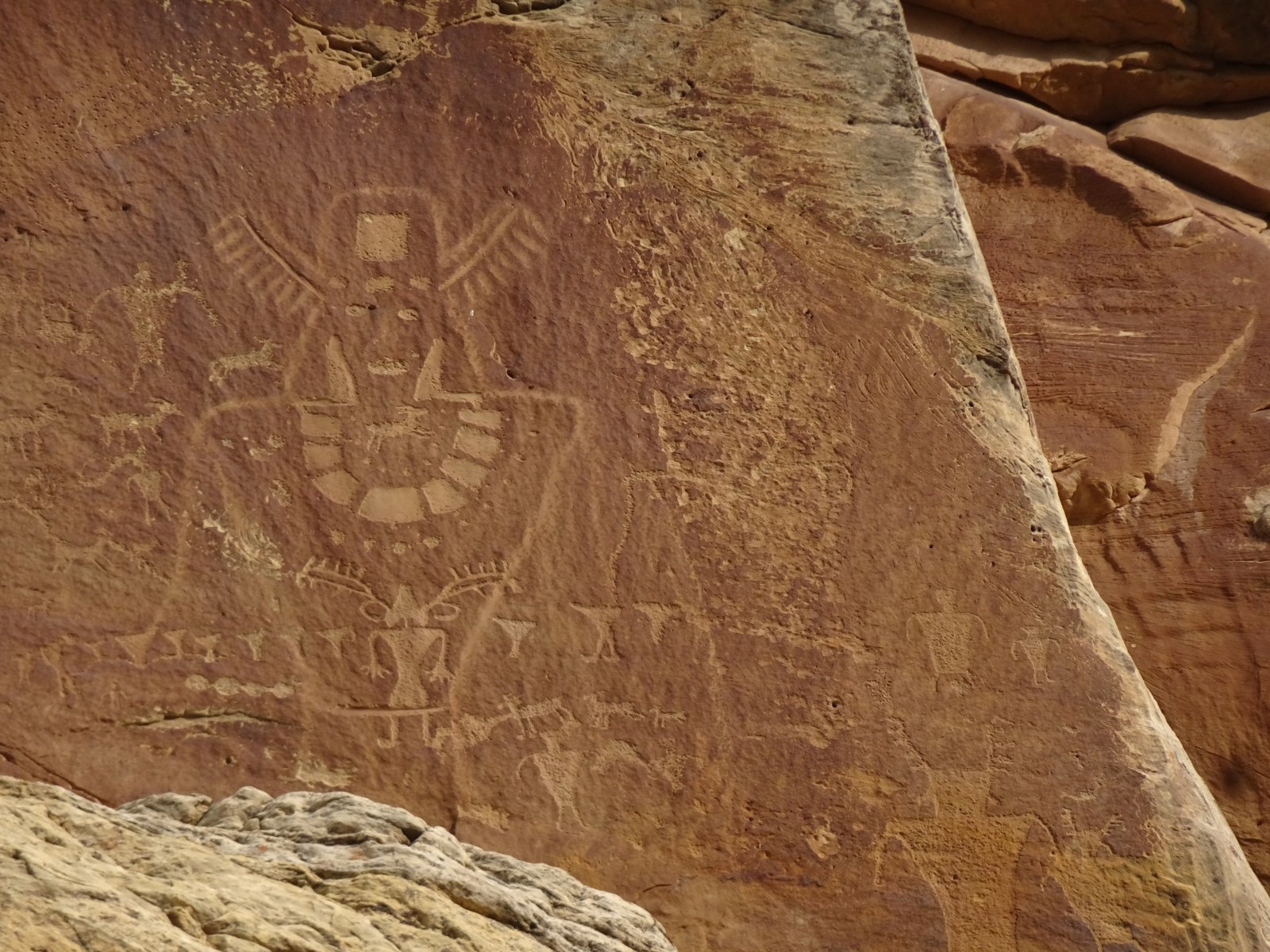 Insects of some sort. Centipedes?: 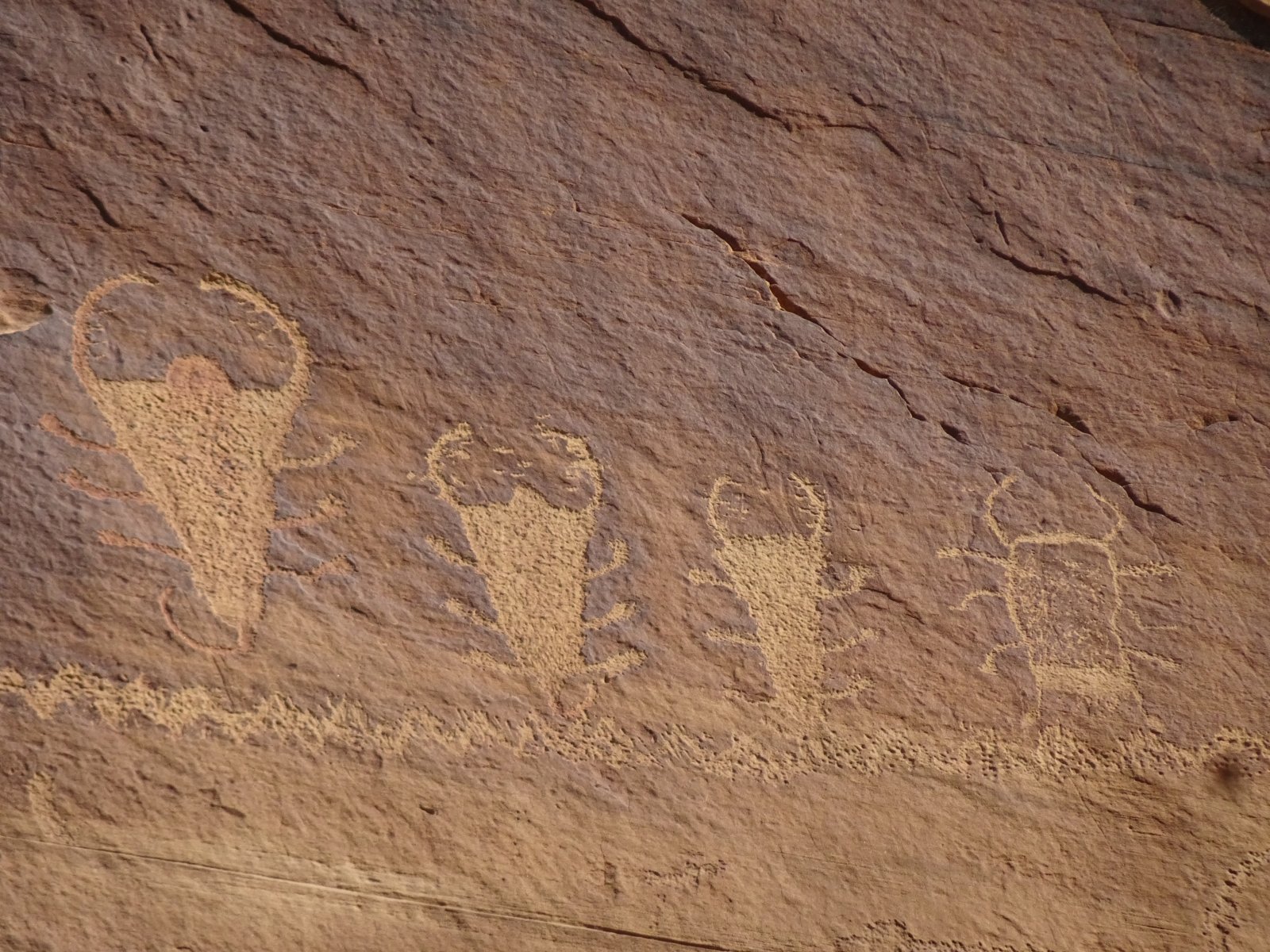 Twins or pairs holding hands have been found at a few sites in the surrounding area: 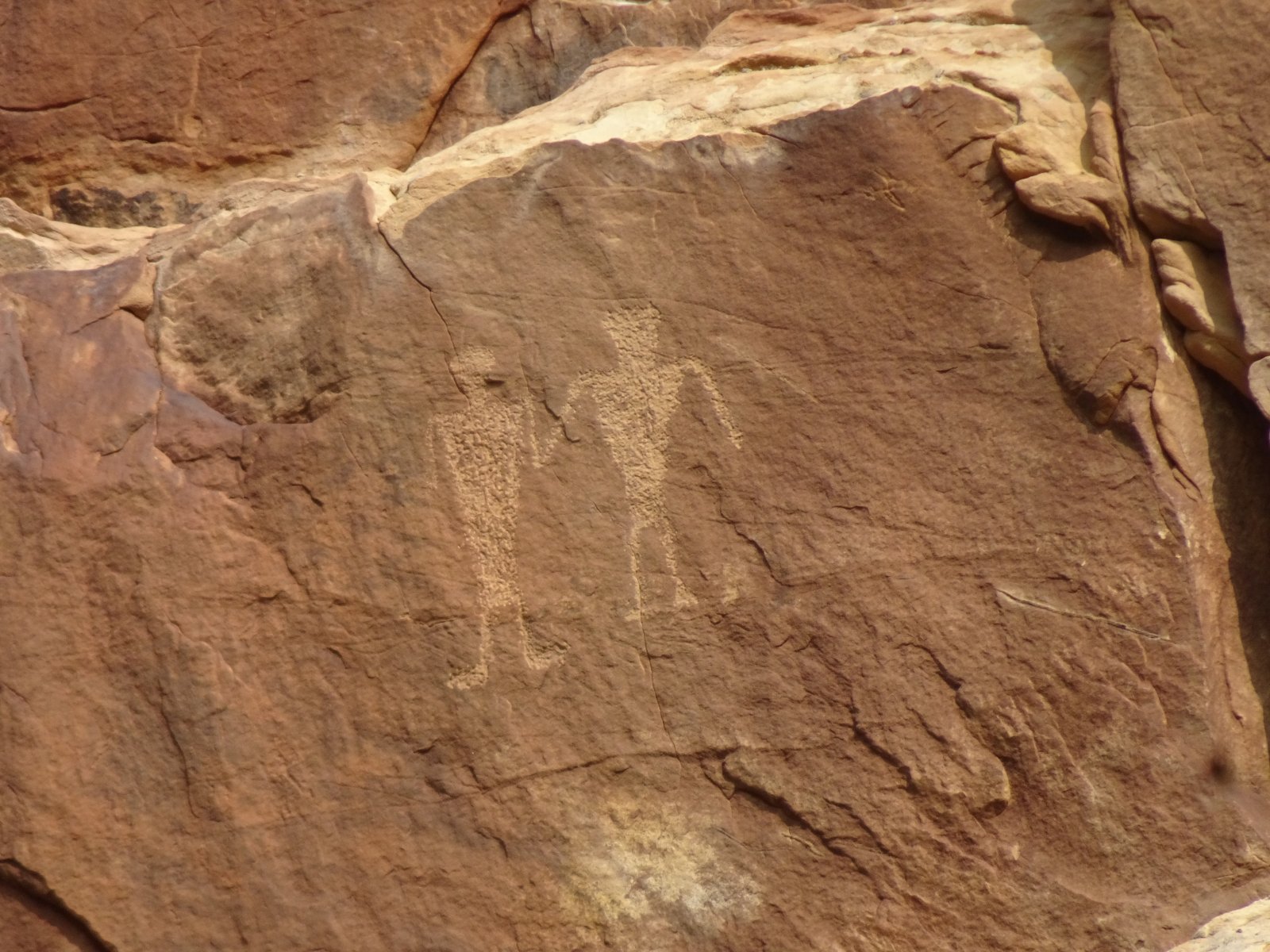 After the hike we headed north and west, crisscrossing the Colorado/Wyoming border far too many times to keep track of and passing countless pronghorn and natural gas rigs. It was a stark landscape to say the least. We were surprised to find a ranching complex in the middle of nowhere and poked around the remains and detritus.

What appeared to be the main house: 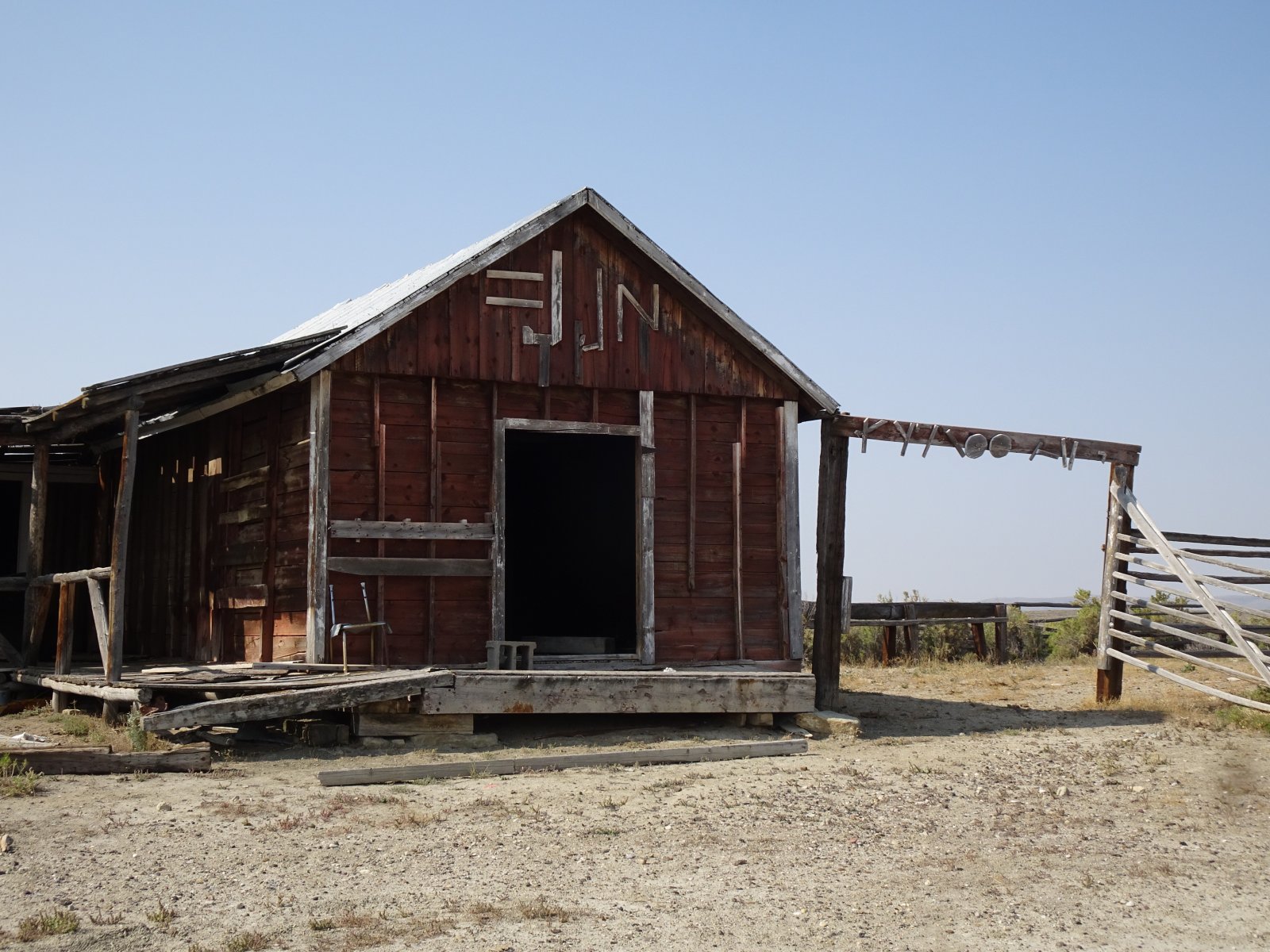 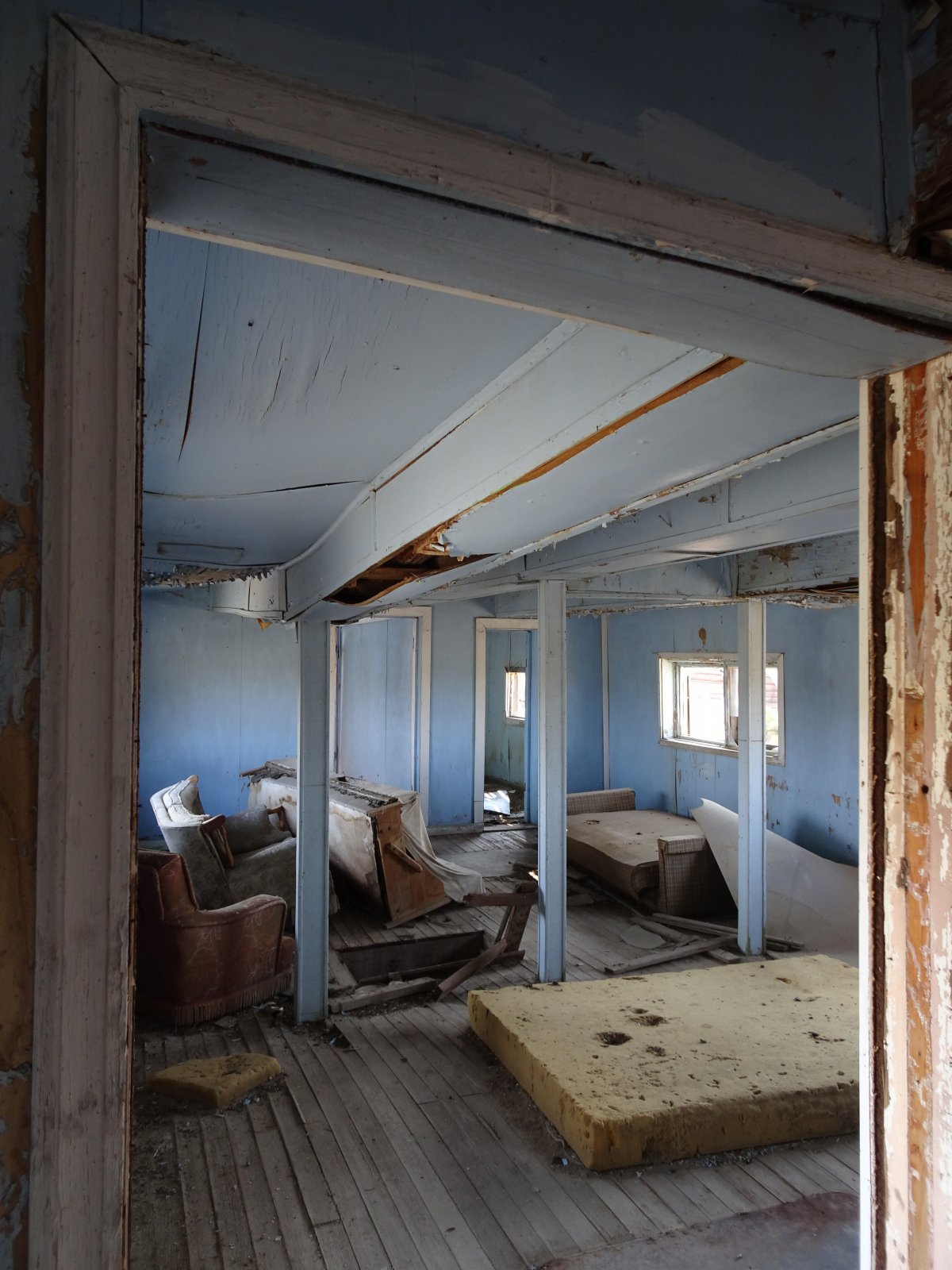 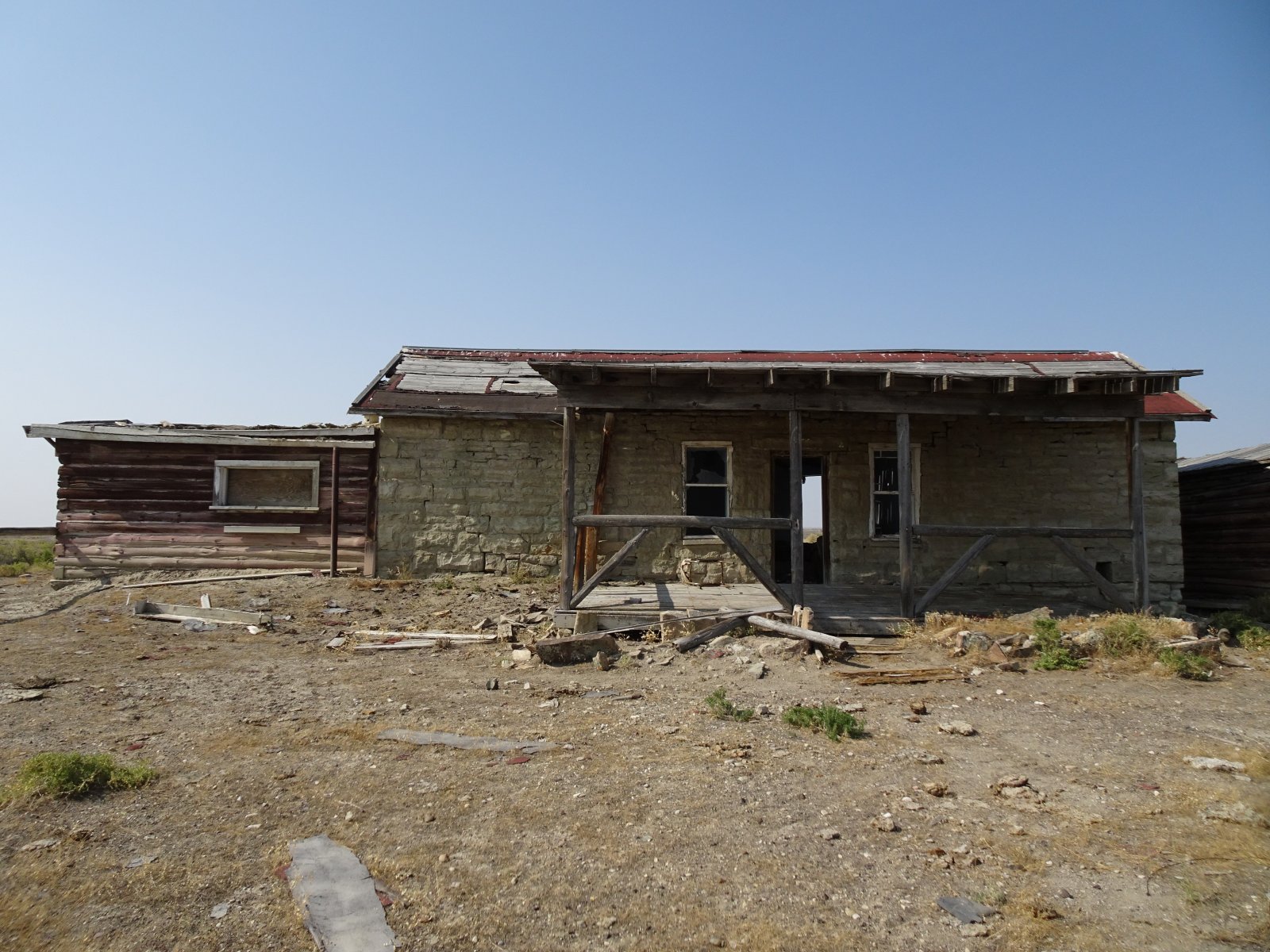 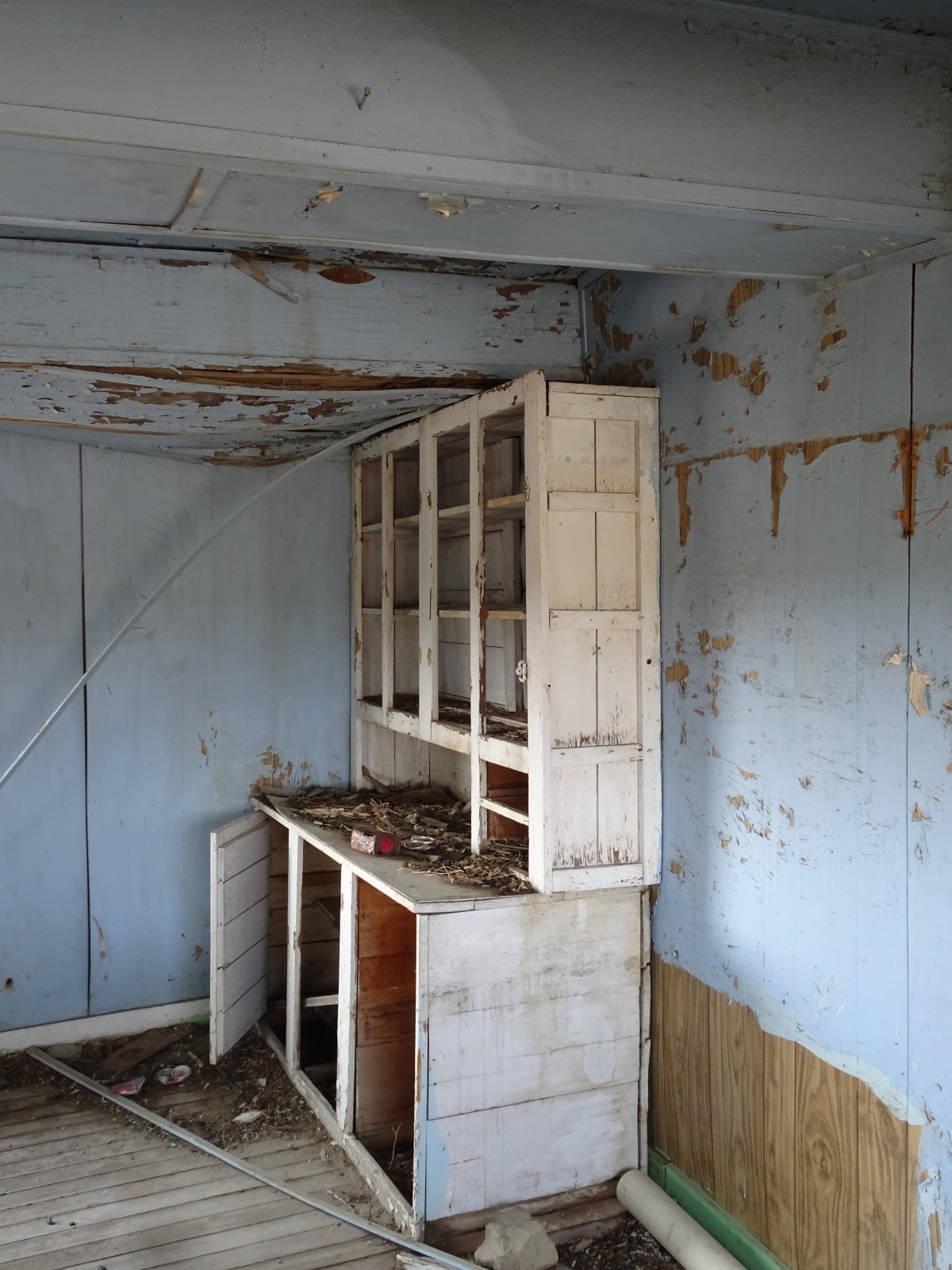 Diving on we arrived at Skull Creek Rim and set up camp. The geology in the canyon reminded us of several other places we've visited, yet not quite the same. 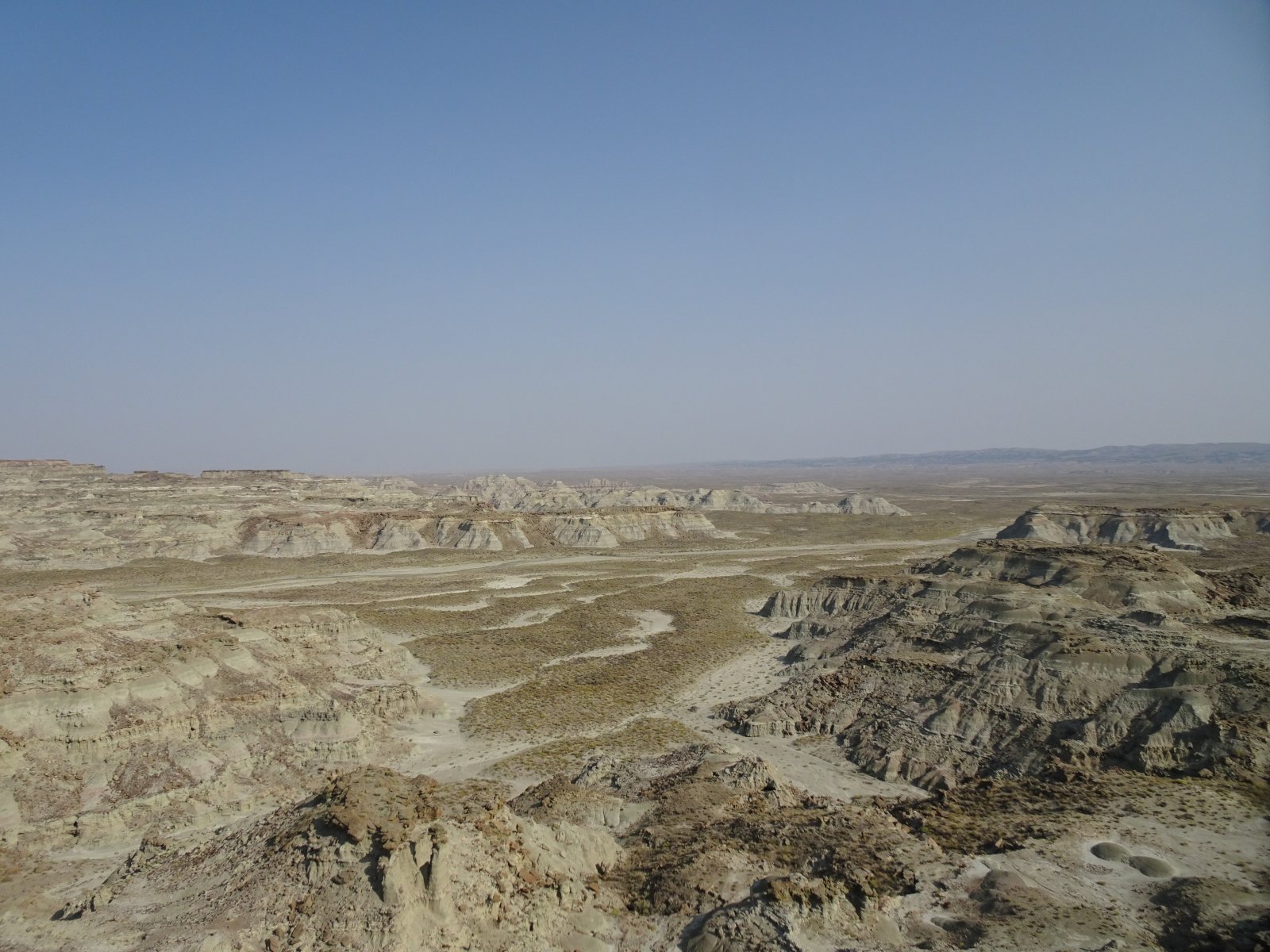 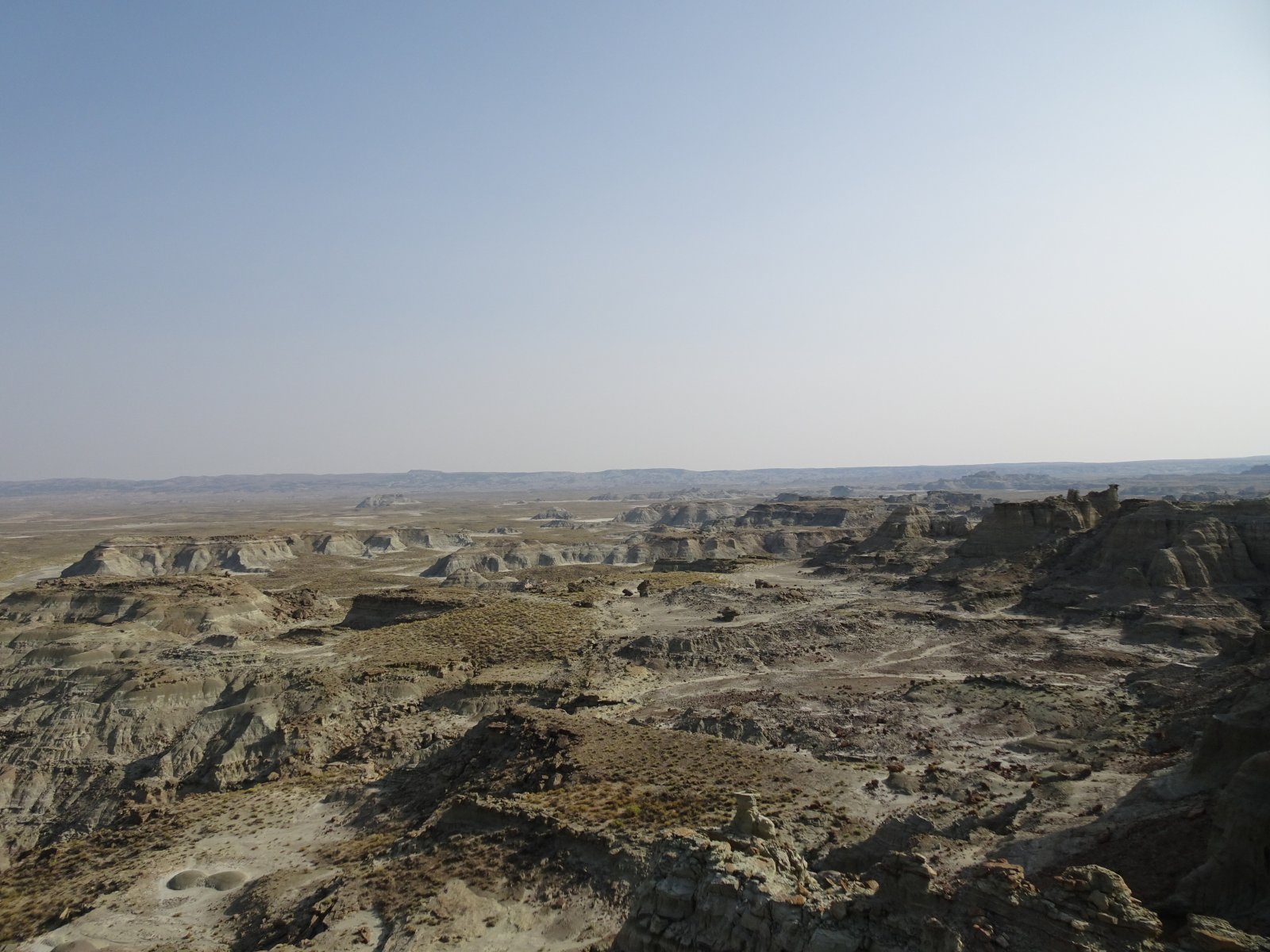 These chocolate-colored rocks atop the whitish, melting cliffs are sooo similar to a place in Utah, but I can't for the life of me put my finger on it: 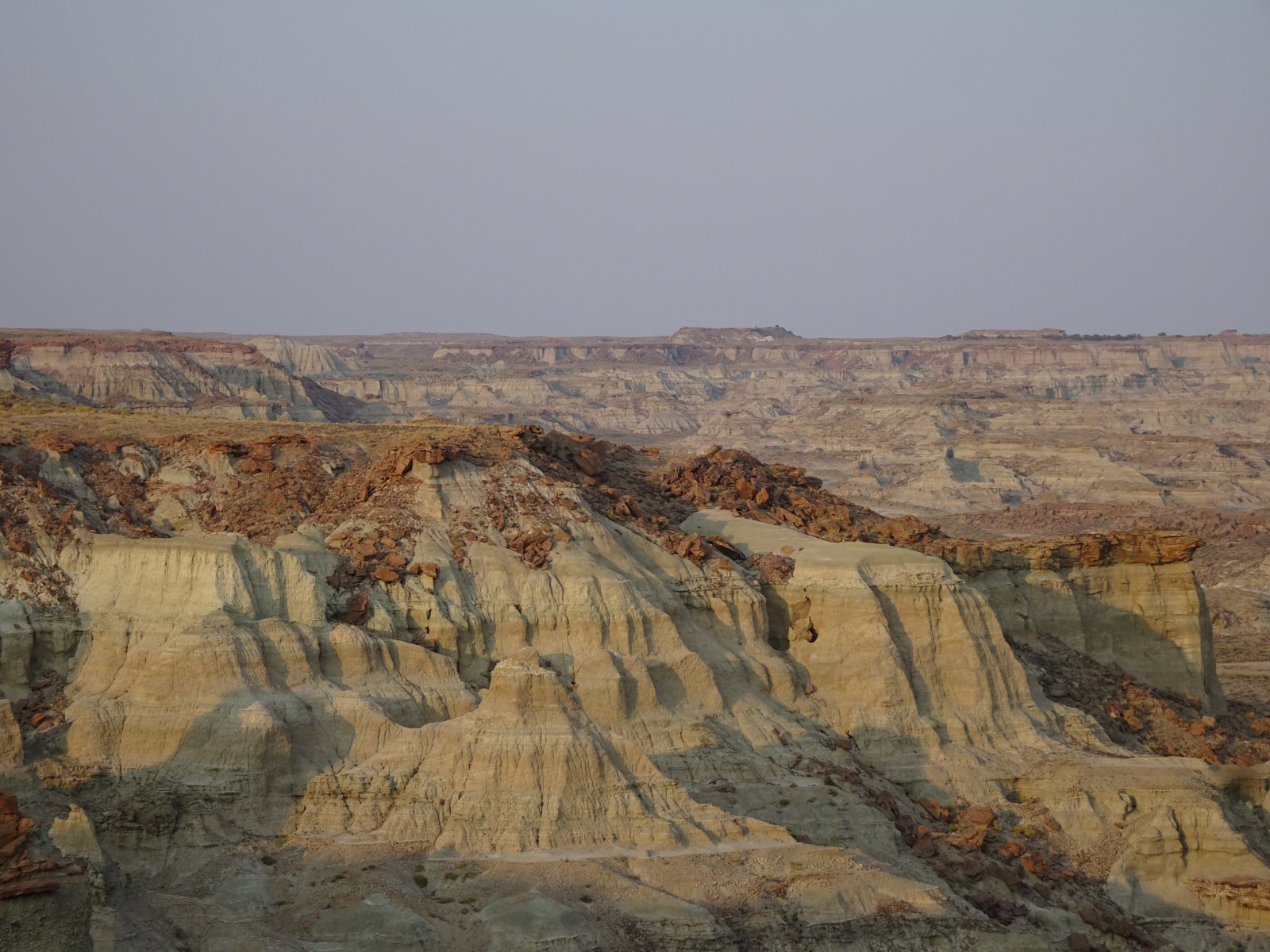 Just as we were sitting down to enjoy an adult beverage, we commented that despite all the mounds of horse apples we'd noticed during the drive we hadn't seen any actual horses. Right then a small herd of wild horses came galloping across the canyon floor below us. Don't know if something spooked them or if they were just having fun. Our camera wasn't nearby, so there are no lasting images except in our minds.

Our aim for Day Three was to see the formations at Adobe Town and then the soaring Boars Tusk. Driving north on an unnamed jeep trail the landscape was moon-like with an occasional pronghorn thrown in as a reality check. About 10 miles into the drive, however, the road vanished. It was shown on topo maps and was clearly visible on sat imagery, but had simply disappeared into the desert. We hopped out of the truck and scouted around to see if the road picked up further on, to no avail. We decided it prudent to back-track to more substantial roads as we didn't have a lot of extra fuel for potentially fruitless exploring.

End of the road: 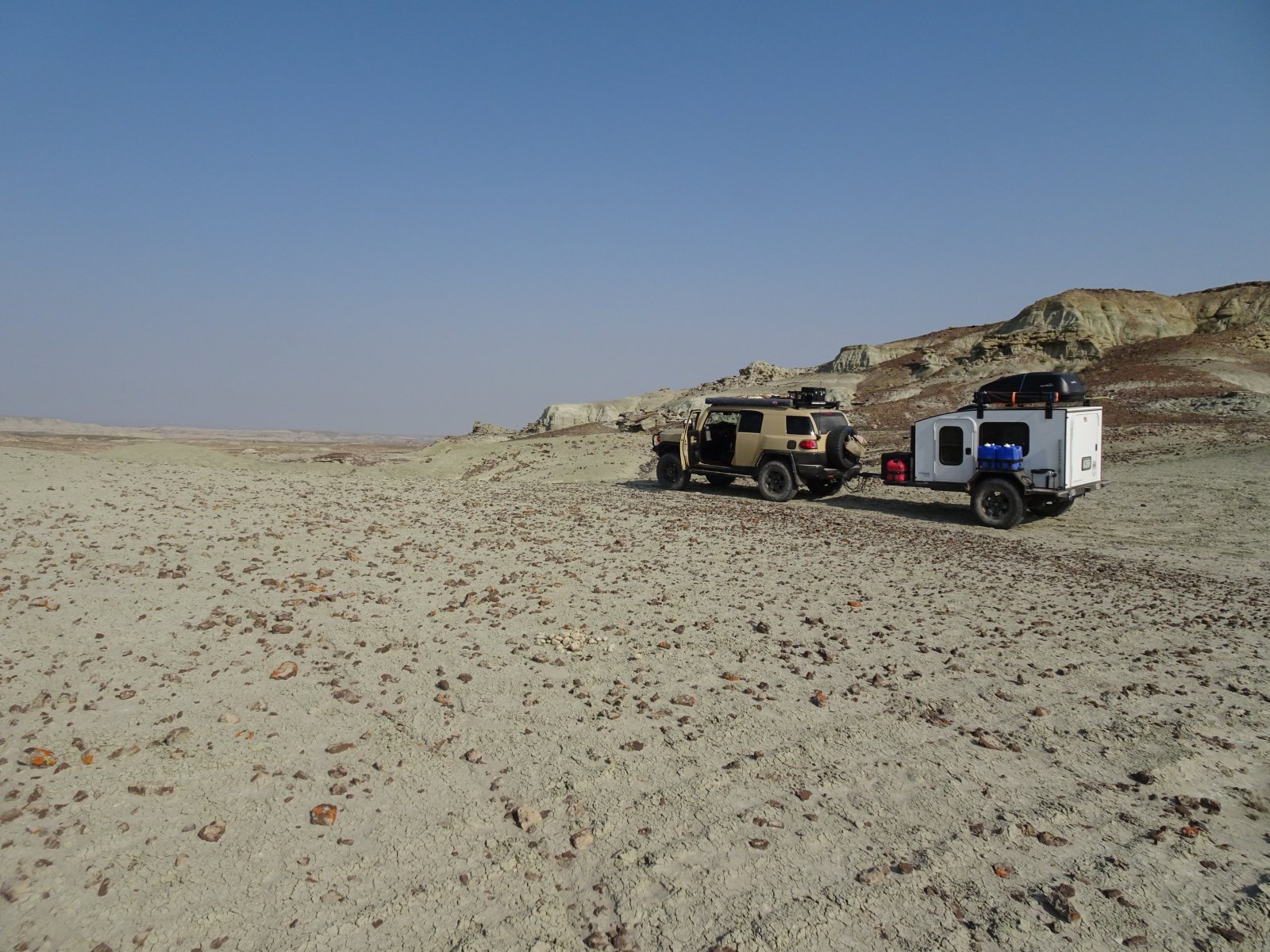 Once back to civilization, we checked out the Tolar petroglyphs. 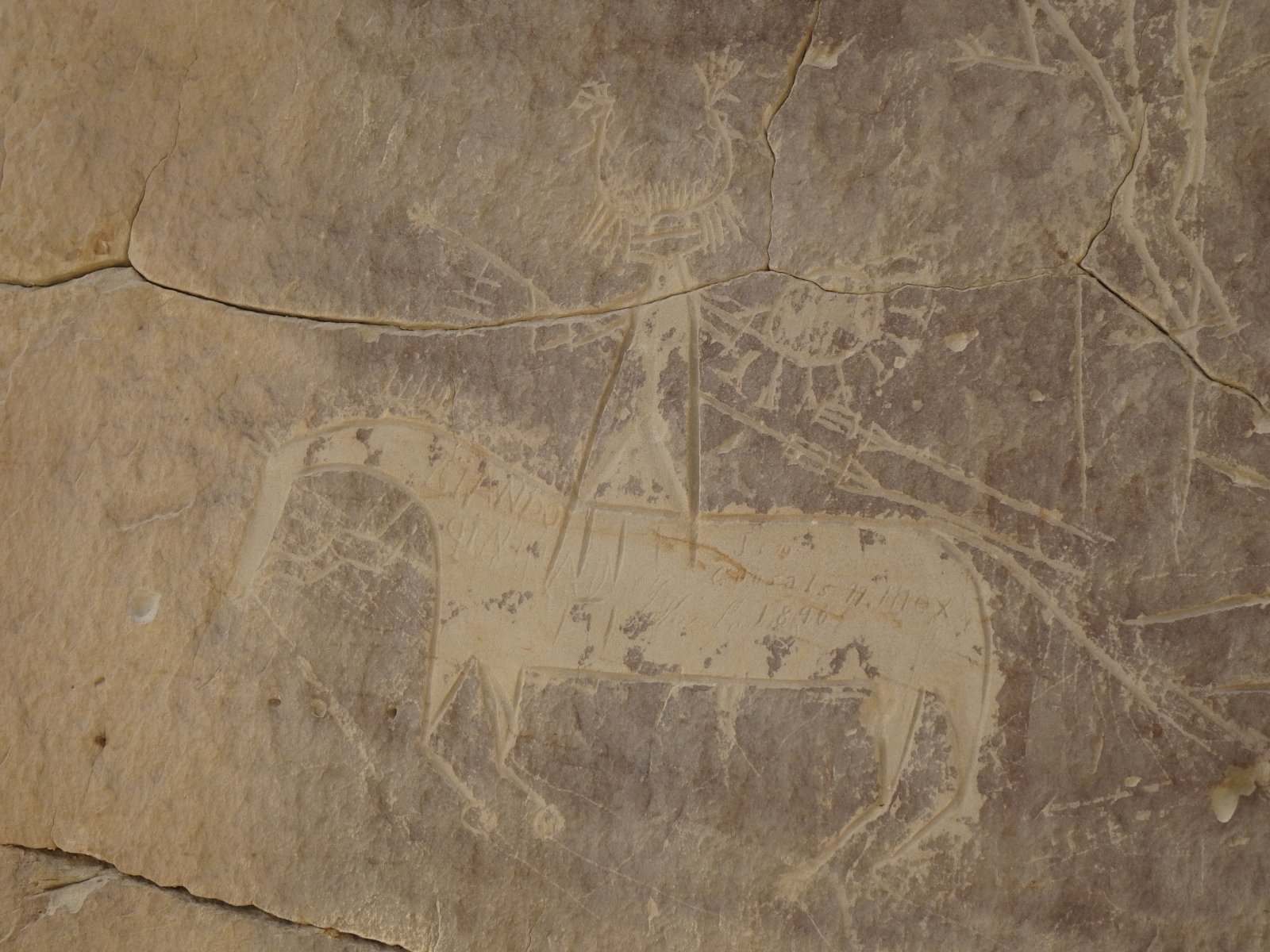 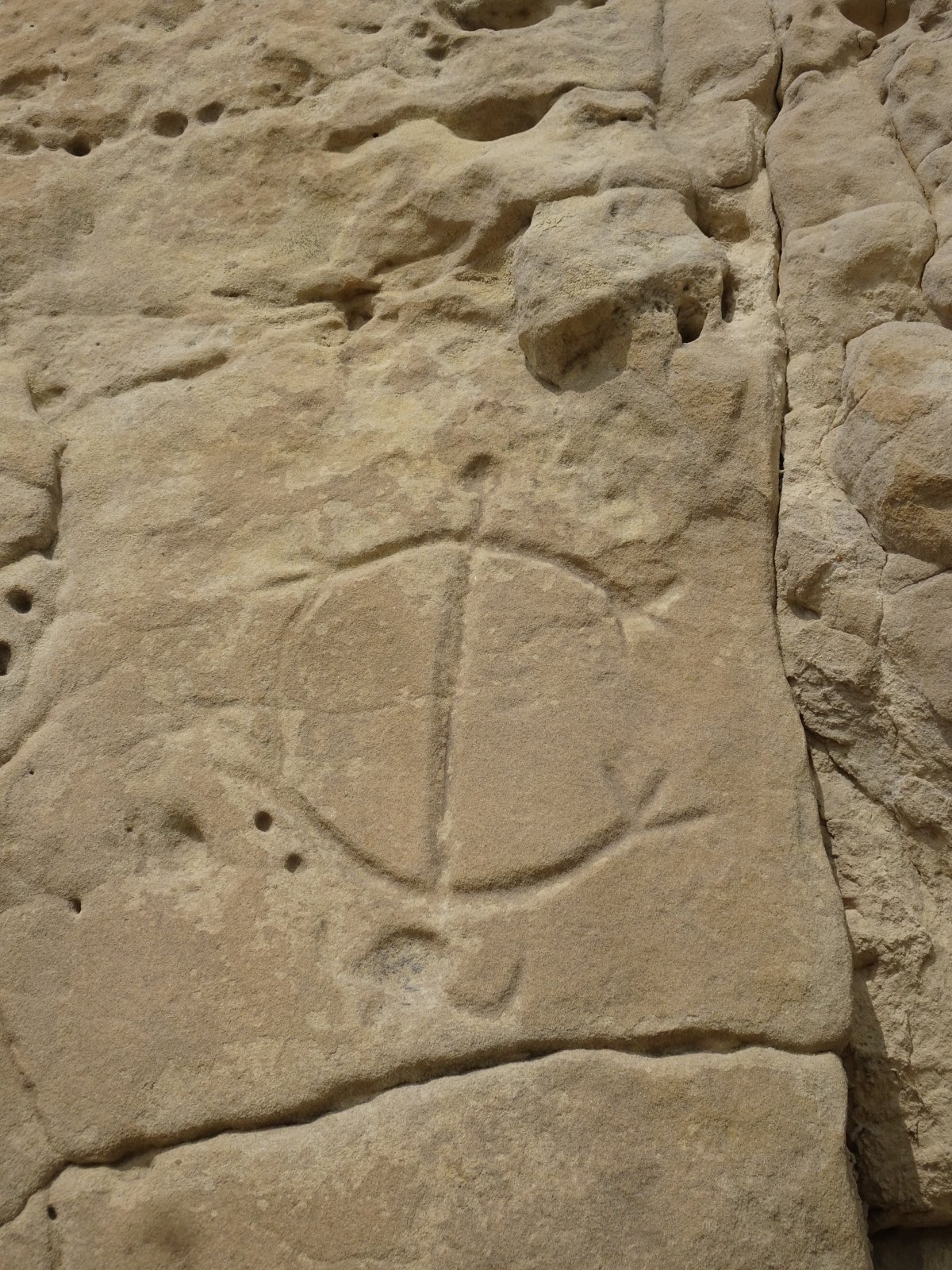 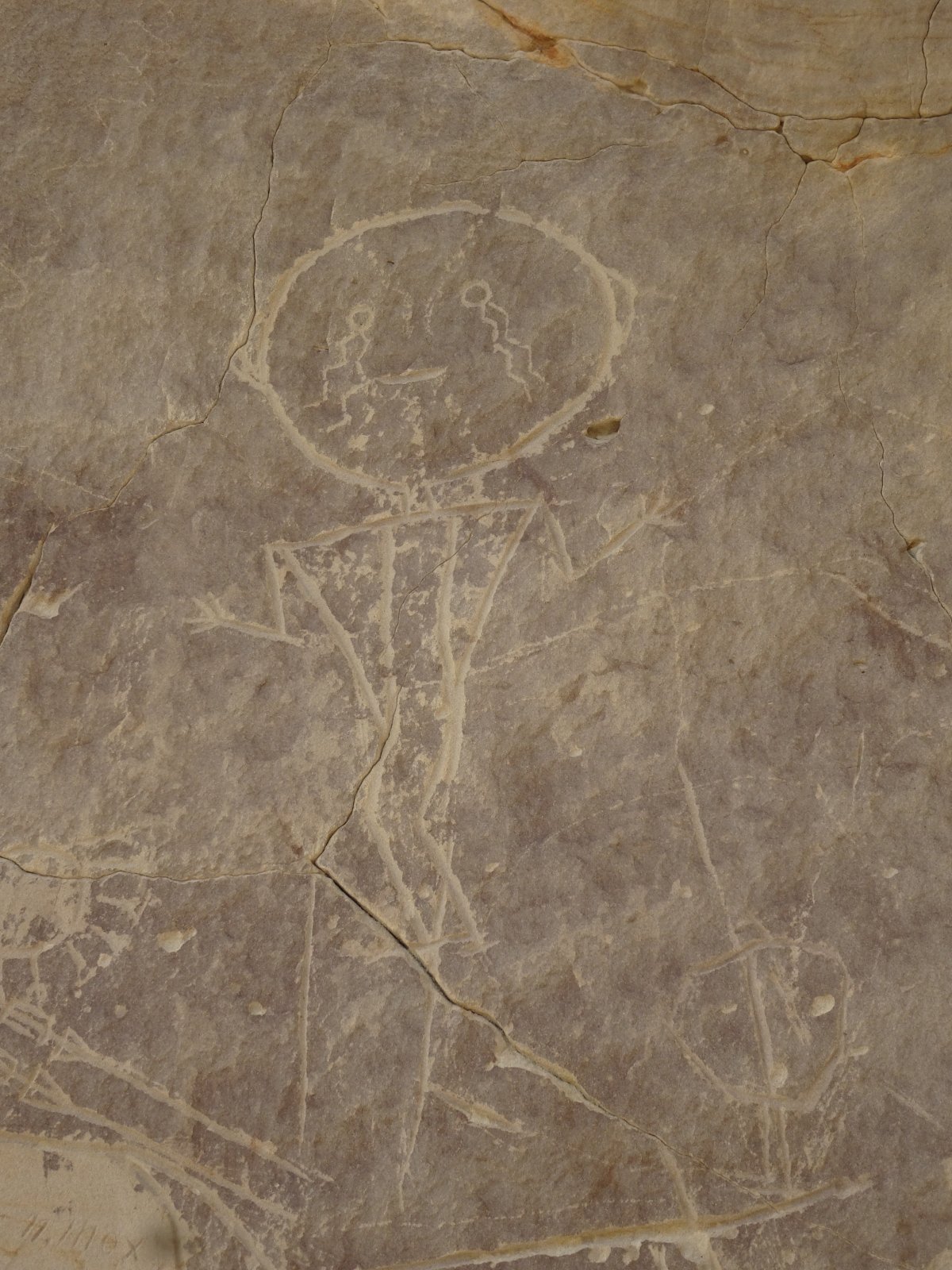 The next morning the smoke level had gotten to the point where it was no longer enjoyable to be outside, so we called it quits and headed on home. I'm sure Adobe Town, Boars Tusk, and numerous rock art sites will still be there awaiting a future visit.
Last edited: Sep 23, 2020

Super cool petroglyphs, thanks for sharing!
"The chocolate colored rocks on top of the whitish melting cliffs in Utah"- it reminds me of Sidestep Canyon and some cliffs in that region...

Titans said:
Super cool petroglyphs, thanks for sharing!
"The chocolate colored rocks on top of the whitish melting cliffs in Utah"- it reminds me of Sidestep Canyon and some cliffs in that region...
Click to expand...

Hmmmm....I don't know of Sidestep Canyon. Where is that?

Stephanie B said:
Hmmmm....I don't know of Sidestep Canyon. Where is that?
Click to expand...

NW of Big Water in the Wahweap Wilderness Study area

Awesome TR. Now I want to go back out there for some serious exploring.
You must log in or register to reply here.
Similar threads