Oregon: Earth, Wind, Fire, and Rain...not in that order

Since I had to speak at a conference in Portland this month, we decided to make a road trip out of it and stop along the way to enjoy some of the sights and trails of our neighbor to the North. As usual, all did not go according to plan!

We began with a long drive from Napa to Bend, through a scorching hot string of towns (Red Bluff, Redding, Weed, Klamath Falls all over 100 degrees) and some pretty dense smoke east of Crater Lake due to some large wildfires. We had a hotel reservation at one of the least expensive hotels in town: $180 a night. If we weren’t from Napa, where hotels are insanely expensive, we would complain more. A lovely dinner at the Jackalope Grill (how can you resist a name like that?) and we were set to start our first backpacking trip the next day.

We were starting from Pole Spring trailhead, at the end of one of the best gravel roads we’ve ever driven. But as I was filling out the trailhead permit, M suddenly remembered that she had forgotten to pack any stove gas in her packs. That dirt road didn’t seem quite to appetizing at that point. Luckily, P thought to ask a couple of guys who had just finished their hike in front of us if they might have a spare canister in their packs. They has a partial, easily enough for our overnight trip, and they gave it to us with their very best wishes and kind regards. Thank you, Marvin! You saved us!

So with gas in pack we hiked through three and half miles of burnt to a crisp forest before we finally got some shade. A big fire burned through here just a few years ago, and while it made for slightly better views of the Sisters Peaks on the way, it was pretty sad to see. But once we got across Squaw Creek, we were in heaven: lush forest, spectacular views, and a continually graded trail that never really got steep, even though it climbed 1700 feet from the trailhead to Camp Lake in nearly seven miles. 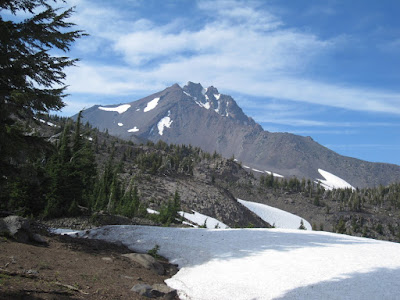 We had been warned that Camp Lake might be windy and crowded. It was both of those things. There were six or eight groups camped around the lake, and the wind was howling down out of the pass. So we decided to collect some water and hike back down the trail ½ mile, where we had seen some lovely quiet and private campsites with views of all three Sisters peaks. (Middle and North Sister are not visible from Camp Lake). It was the right move. We were surrounded by clouds of California Tortoiseshell butterflies, the site was perfectly protected from the wind, and the views were simply amazing. So the very first day we got WIND.

At 3 p.m. the smoke from a nearby fire began to blow in, and the views deteriorated. But we ate dinner, looked at the wildflowers, and settled in for a nice quiet night in our secluded nook.

Dawn brought a glorious sunrise, and I took quite a few pictures. Then we were up and hiking out, down through the forested section, down through the burn zone, and back to the car in time to make it to the town of Sisters for lunch. There we learned that our next adventure was going to need an alteration, as the Whitewater Fire was pretty much right where we had planned to hike next. 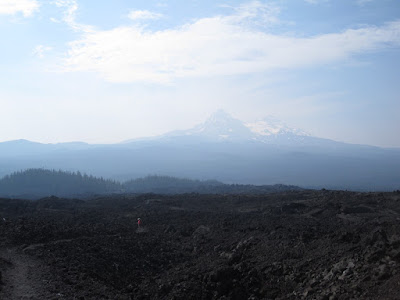 We stopped into an outdoor store to buy gas (good idea!) and consulted. The next best bet seemed to be a trip on the PCT South from Mackenzie Pass. This would take us on the Mackenzie Pass scenic byway, which was very cool, and get us out on a trail that shouldn’t have too much smoke.

That didn’t work. We found a car camping site at Scott Lake that worked perfectly for us. There is no piped water there, so the 21 campsites rarely fill up. But the smoke was everywhere, and there seemed to be little point to climbing up on top of mountains if the view was all smoke. That’s takes care of the FIRE. We decided that instead of doing a backpacking trip into the smoke, we’d try to limit our lung damage with a day hike across the lava at the pass to Little Belknap Crater.

This was definitely the right move—an really wonderful hike first through a couple of forested “islands” in a sea of lava, and then a trail straight across the rocks to Little Belknap. The lava was full of surprises, including lots of lava tubes, bubbles, wild formations, and a few tiny trees struggling to find a foothold 2700 years after the eruption that spewed the lava. So if day two was fire, then day three was EARTH—lava in all its forms.

And that night, back at the campground, we got just a sprinkle of rain as well. Not enough to clear the air, sadly, but enough to cool things down a few degrees. And it got us thinking. 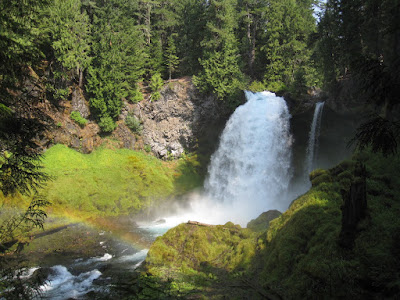 There were some wonderful trails along the Mackenzie River, according to hiking book we bought by William Sullivan. Maybe that would be a better choice in the smoke.
The next day we packed up and drove the rest of the Mackenzie Pass Byway, and then the lovely Highway 126 along the Mackenzie River. Yep, there was a campground here that didn’t have piped water, Ice Cap, and we once again found a perfect campsite within a couple of hundred yards of Koosah Falls. We hiked up and down the river, visiting Sahalie Falls and Carmen Reservoir while we were at it, and fell in love with this section of the river. It was roaring, it was icy, it was cascading over rocks and glistening though deep blue/black pools. Old growth forest, rhododendrons, ferns, currents of icy air and an occasional rainbow made this an unforgettable hike. After the smoke and heat of the Sisters, this was heaven. And it filled out our list with a day of pure WATER.

By the end of the next day we needed to be at Big Table Farm, our friends’ winery north of McMinnville, so Day Five would take us a few hours in the car—but not so long that we could stop at Silver Falls and enjoy the waterfalls there on the way. 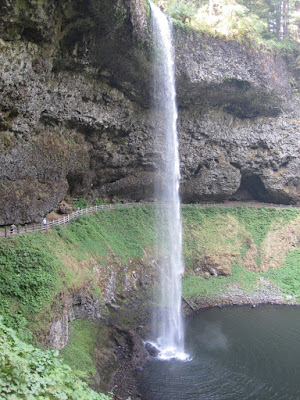 What a treat. A volcanic canyon filled with waterfalls that have eroded the softer rock behind the falls, so that the trails led us through seven waterfalls, three of which we could walk behind. A lovely way to wrap up our hiking in Oregon.
After the conference in Portland, we drove down to Eugene and followed the Upqua River (stunning) to Reedsport on the coast, and then drove the coast highway back into California, so that we could visit M’s sister in Brookings. And decided that we would have to come back and explore some more.

As always, photos are on our photo page: https://goo.gl/photos/owumssEkpiJpyz5t5
You must log in or register to reply here.
Similar threads