Oops, I forgot! (Or broke it) - Innovating in the Backcountry

Looked back a ways and I couldn't find a relevant thread for this so if there is, I apologize for starting a new one. I'm starting this thread because I know many of us have arrived at a campsite deep in the backcountry only to realize an essential piece of gear was forgotten...or found an essential piece of gear to be broken or malfunctioning. Whether forgotten or broken, it probably resulted in the need to engage in some creative problem-solving and innovation. If you have a story, please share what was forgotten/broken, what you did to resolve it, and share a picture if you have one.

To start off, I'll share an incident from just over this past weekend...

After an epic 'little' overnight solo trip through a section of Caption Reef National Park on Saturday night with my Tarptent Notch, which only relies on my trekking poles and some stakes for setup, my wife picked me up and joined me for another overnight trip on Sunday. In switching out the solo tent for the 2P tent, an REI Half-Dome, I must have still been in the mindset of not needing to pack additional tent poles, because I failed to ensure I had put the poles that go with the Half-Dome into my pack. It wasn't until 4 miles later as we began to set up camp that I realized this mistake. I've been so used to not having to use any extra cordage, that I left that back at the car too. And there was no way my wife was going to enjoy sleeping cowboy style with the massive ants crawling all around the spot we were set to camp at among other things. (I wouldn't have enjoyed it either)

So we were left to survey what we had on us to come up with something that could work. My wife was quick to suggest using trekking poles but what kind of cordage could we use to hold them up? I then thought about the para-cord bracelet I was wearing which I had made a while back whereupon I had wondered if it would ever become useful for something more than just body decor.

Well, after unweaving it all, I attempted to carefully open the sheath with a knife blade, but struggled to be proficient with that. So I opted for the little scissors on my little Gerber Dime multi-tool and those proved formable for cutting through the sheath to expose all the smaller strands of string within. I was then able to use those strands of string to rig up some guy-lines that I was able to prop up the trekking poles with and stake out the tent in such way to give us just enough head room. It wasn't pretty, but it sure was functional. 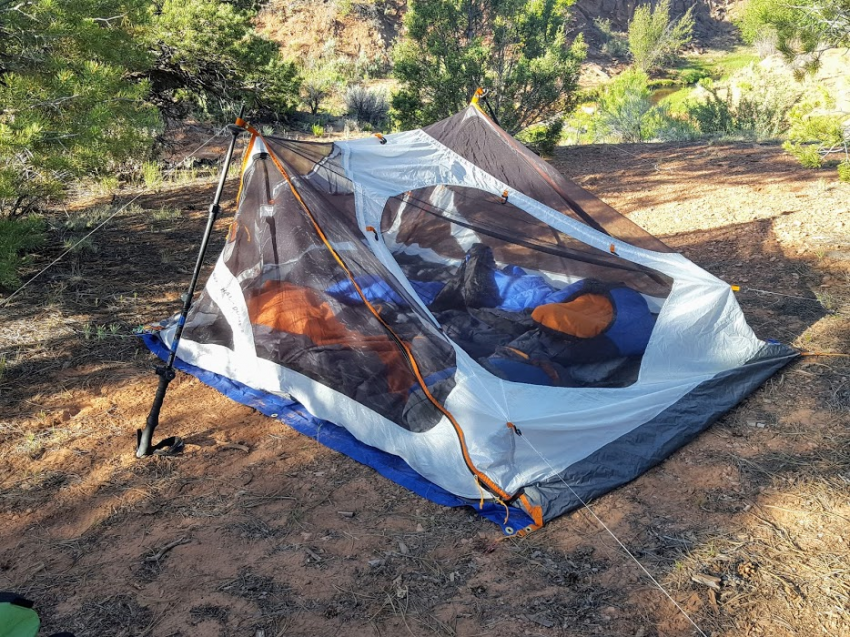 Good innovation. Like how you used your bracelet for the cordage. Tiny scissors are a must in my kit too.

A micro burst hit us once out of nowhere, not our fault, the wrath of nature was responsible. Little lines of thunderstorms were passing through but nothing really scary. Then out of nowhere we were blasted by a roaring micro burst that was ferocious. I wrapped girlfriend's head in a towel and dragged her to the tent, put her about halfway in and lay on top of her. We were covered in wet mud, sandblasted by the stuff and our tent was pretzeled all up and flat on top of us, the poles completely kinked up badly. None broke though and after bending them out again we putted along with it for the rest of the trip. Got a new tent for the next trip though.

Nice topic. Tent poles seem to be a common theme. I was solo in Robber's Roost, and a single blast of wind broke one of my tent poles. I moved my tent under a lone tree and used my food bag cord to tie the tent to an overhanging tree limb to hold it up. I don't remember how I tied the cord to the tent fly...I think that was the hard part. It wasn't pretty, but it limited the sand blasting.

Got hit with a really strong blizzard along the AT in Tennessee. Set up my non-freestanding tarp/tent/bivvy thing (a $30 piece of crap I had bought at Cabelas) up inside the AT shelter using 2 trekking poles, 6 tent stakes, my bear line, a Sharpie, my backpack, two food bags, a rock, and the leg of a picnic table. Holed up in there for two days while the storm blew through. Miserable experience but some great friendships developed out of the experience.

LarryBoy said:
Got hit with a really strong blizzard along the AT in Tennessee. Set up my non-freestanding tarp/tent/bivvy thing (a $30 piece of crap I had bought at Cabelas) up inside the AT shelter using 2 trekking poles, 6 tent stakes, my bear line, a Sharpie, my backpack, two food bags, a rock, and the leg of a picnic table. Holed up in there for two days while the storm blew through. Miserable experience but some great friendships developed out of the experience.
Click to expand...

Now that is desperate innovation! Saved by a Sharpie. Sounds epic.

We went through a 10 hr unforecast gale force blizzard in the Mojave desert and sheltered in the same tent that was destroyed in the micro burst above. I tied it to a Joshua tree, used extra guylines and extra stakes from my shade tarp. It was the nosiest night we have ever passed. The tent held up though, it just does not like the violent downburst of a micro burst where it sort of explodes. We came across some locals later in the trip that said they had never seen anything like that blizzard/wind storm. Strange things happen out there...

After my spoon broke I successfully whittled, with my very small knife, a serviceable one out of a piece of deadwood that I then used for a week. I still have it at home. That was the end of lexan for me. I now carry a much used and loved titanium spoon.

Friend and I backpacked into White Pine Lake and while said friend was bragging about how light his tent was he realized he'd forgotten the poles! LOL! Gave him my trekking poles and it worked better than his tent poles (he had one of those triangle shaped pup tents).

On another trip a different friend for got the tent poles to his dome tent we were all sharing. Luckily we has set up right under a big juniper tree and had plenty of paracord!

As a kid, went camping and forgot the pan to cook our food. Made a pan out of tinfoil and some branches (Y stick, with 2nd stick to make it in a triangle shape). Worked great! Cooked bacon and eggs in it!
“We don't stop hiking because we grow old - we grow old because we stop hiking”
― Finis Mitchell

This is a cool thread. I forgot tent poles for a Coleman tent once and ended up using PVC pipe from the ACE hardware store in Tropic plus a little extra string for tension. Worked great until a downpour at 3 am in a forest service campground near Beaver. At that point we were at the end of our trip so we just packed up and drove home.

This past August I rafted 84 miles of the Green River through Desolation Canyon (trip report coming eventually). On the second day and about 30 miles into the trip, my friend @Smokey had a weld break on the oar tower of his 31+ year old raft setup. It was the maiden voyage for him with that boat so we were expecting issues, but a broken oar tower is almost like a broken ankle when backpacking. You're pretty much screwed. There were just three of us and two boats, I was solo in my raft, so I had to swing into action and tie up to them and ferry them to the shore right before a rapid.

It seemed hopeless because his frame was a welded steel frame, not modular like a modern NRS aluminum frame. All the possible fixes we came up with would have still left him pretty hobbled with 55+ miles of river left to row and many significant rapids. So we sat under a box elder tree and thought about it for a while before I came up with the idea to cannibalize the footbar off of my raft to rebuild his tower. Doing this would make it possible to get around the welded steel plates on his frame and still keep the tower in the right position. That footbar combined with some spare pipe clamps and straps made for a fix that he said actually felt and worked better than the original equipment. We had to tighten things up once, but it made it through some serious whitewater.

The victory shot on the river: 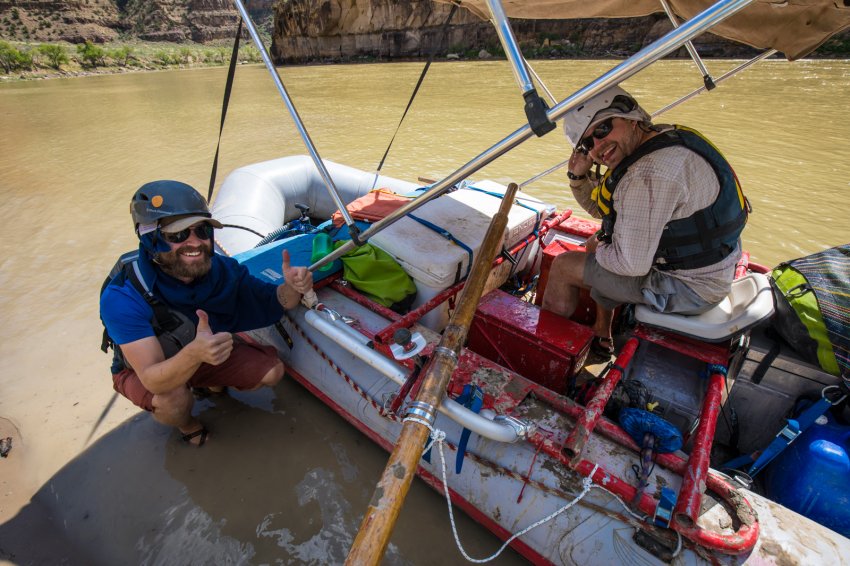 Back at home we took some better shots. This is what the normal tower looked like on his old steel frame: 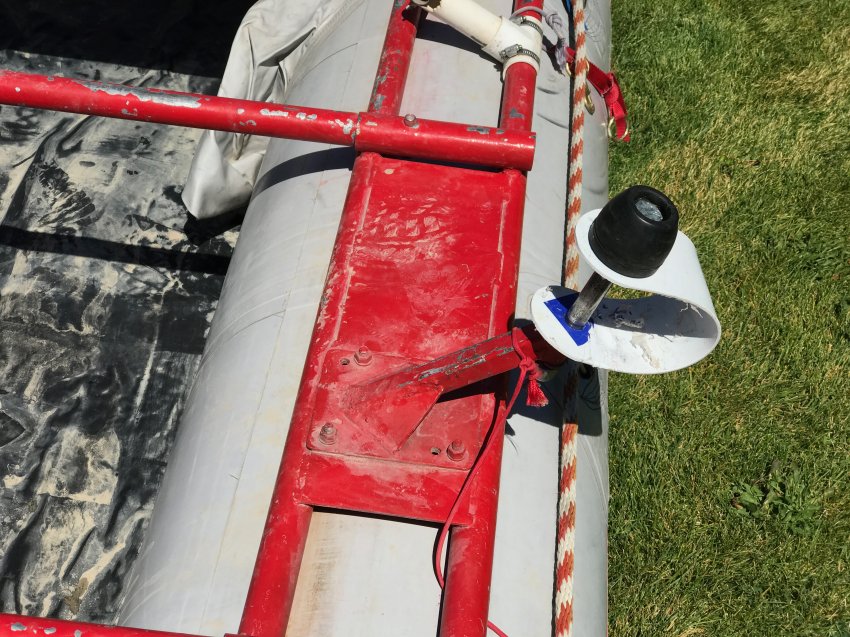 And our fix. I still can't really believe it worked! 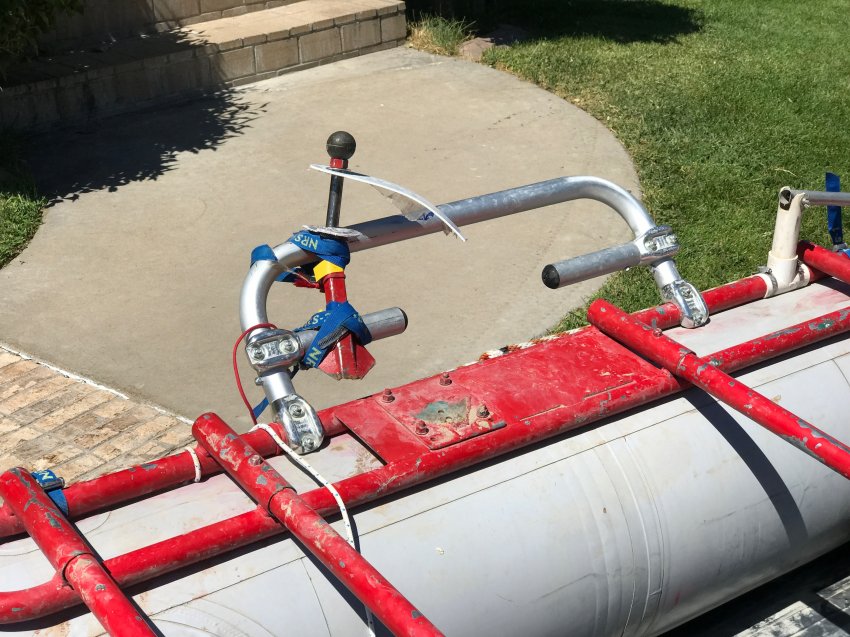