Blake and I arrived by mid-afternoon and were surprised to see so many people in the Swell. We passed numerous camping sites that were packed to the gills with RVs, tents, ATVs, and their owners. Made us worry that we wouldn't be able to secure a site sufficiently large enough to accommodate all the BCPers that would show up in the following days. Luck was on our side, though, and the #1 site that Nick had chosen was empty. Yay! We set up camp and had a leisurely evening.

Evening view of the La Sal's from camp: 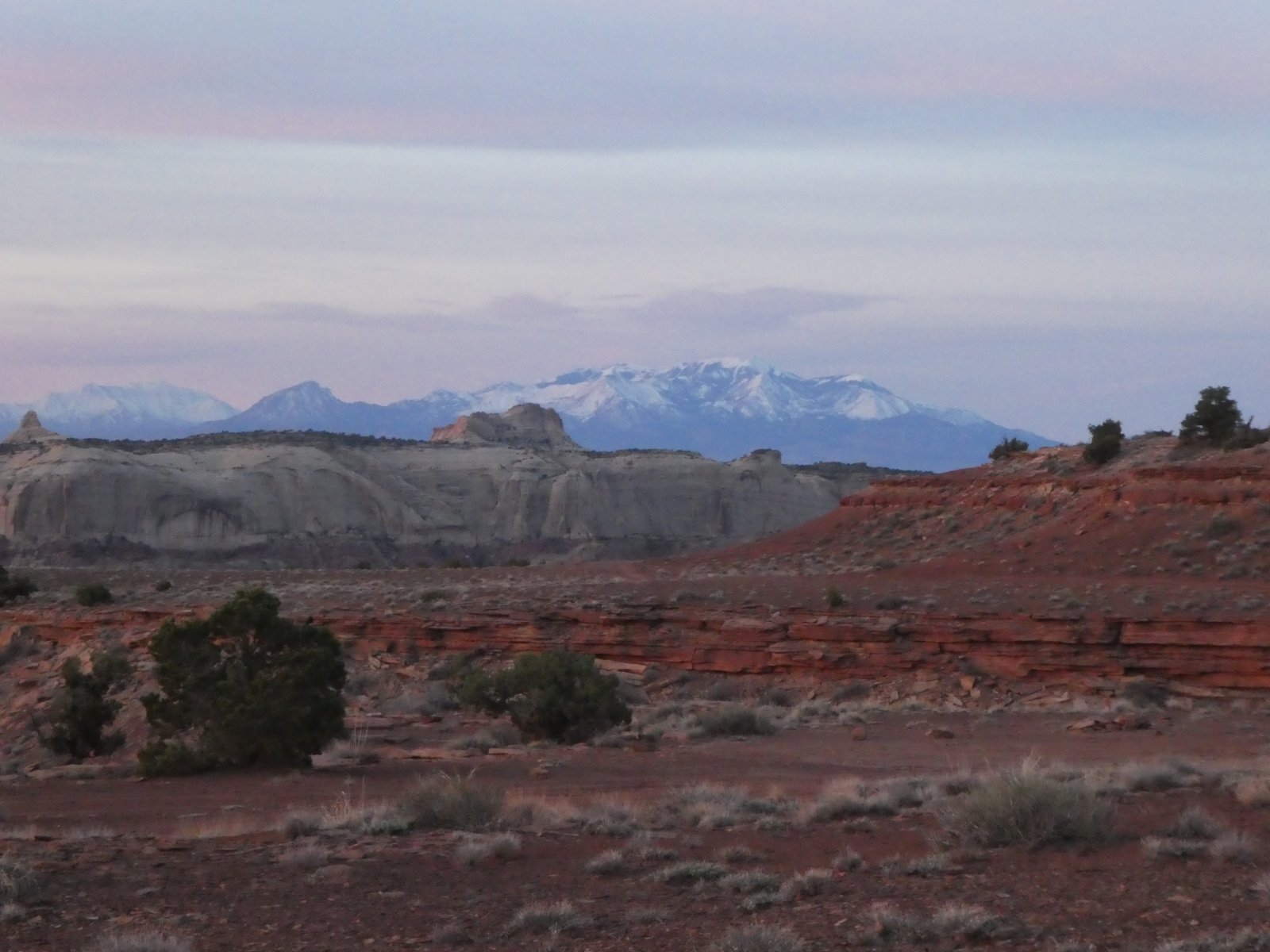 The next morning we drove over to Old Woman Wash in search of rock art. Either the coordinates we have are way off or we seriously need to get our eyes checked because we found only 2 of the 5 panels we were seeking. Rather frustrating!

A large, but very faded figure we found: 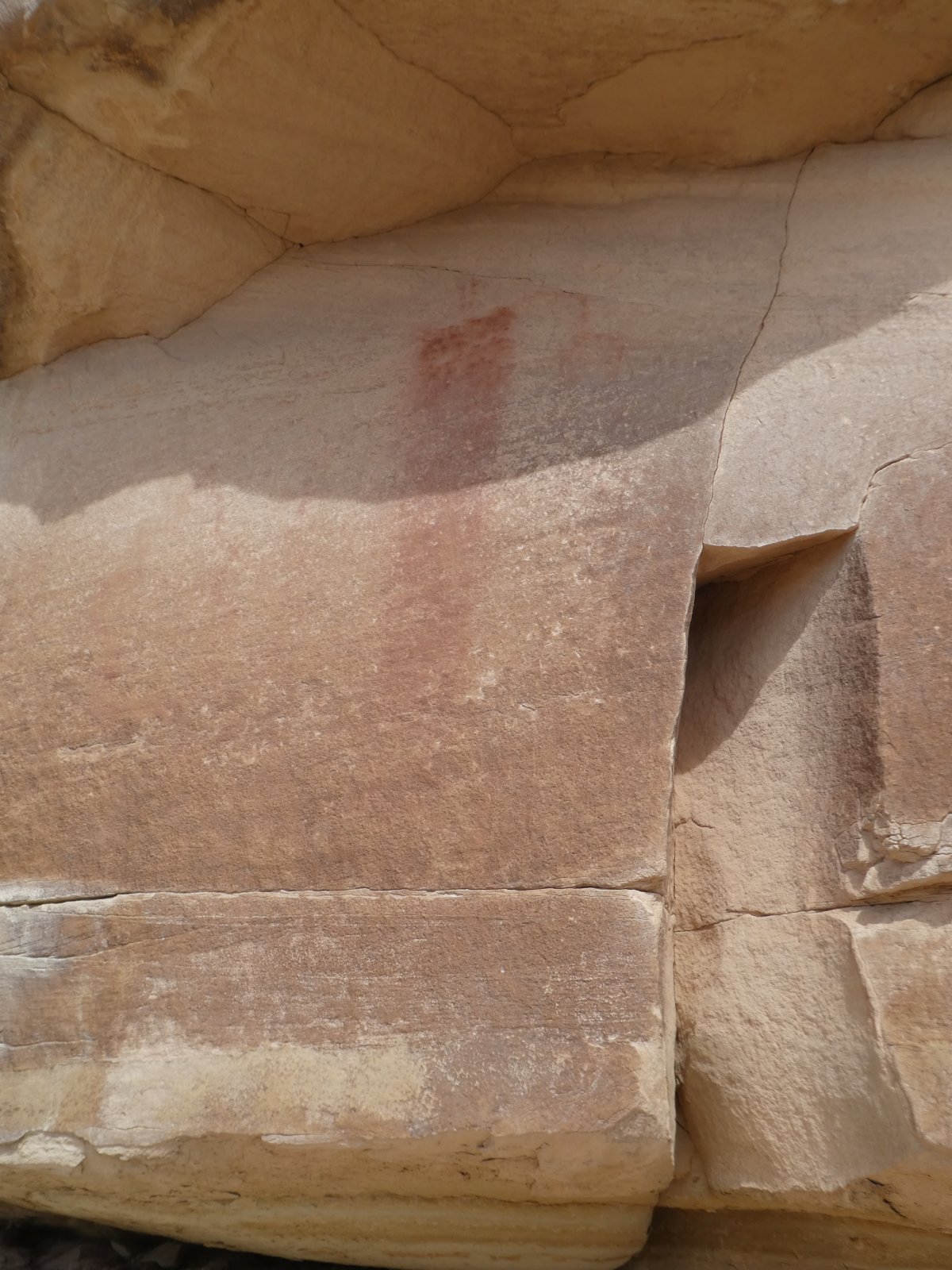 Ekker Site with Blake in the foreground for size comparison: 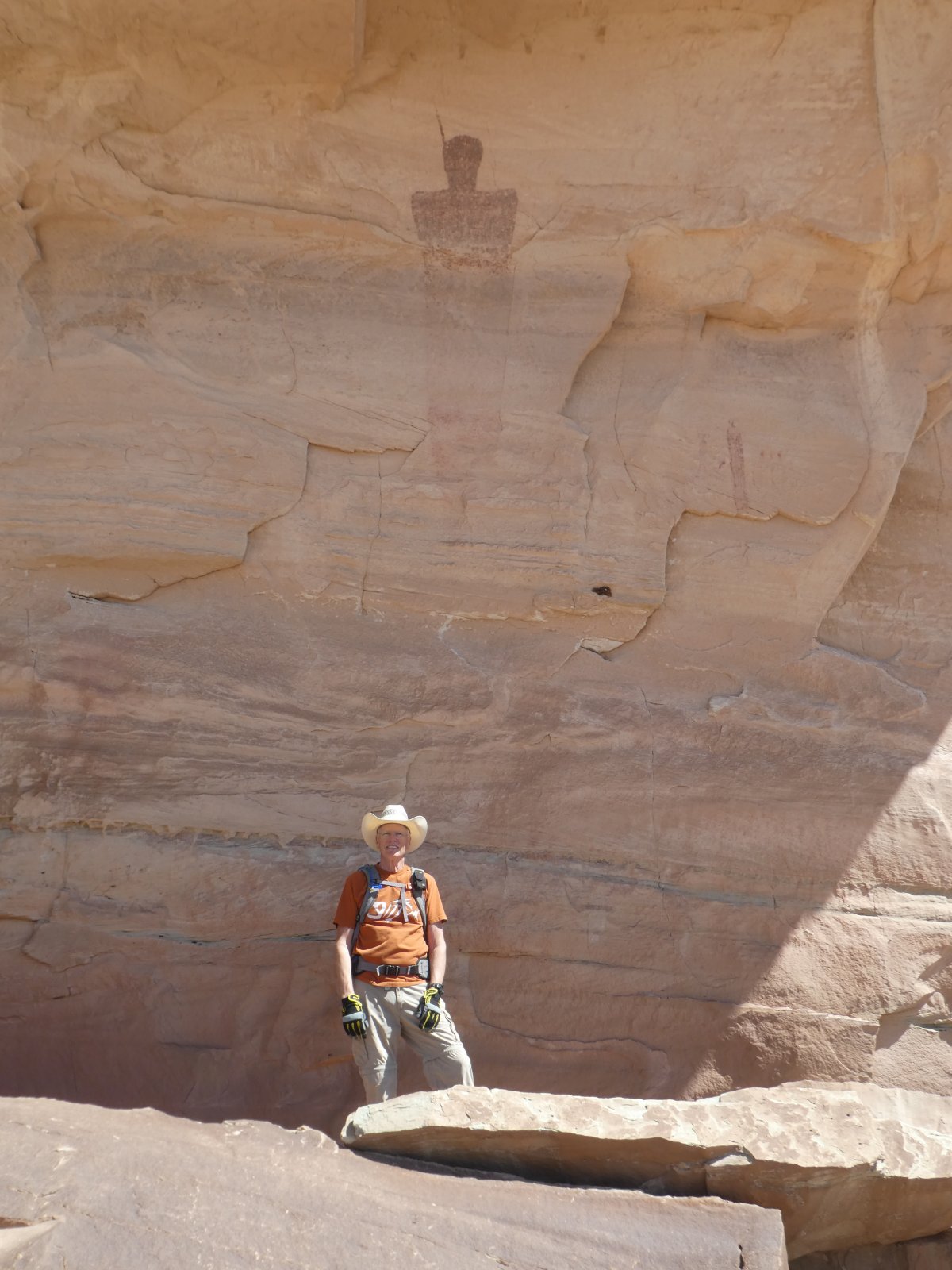 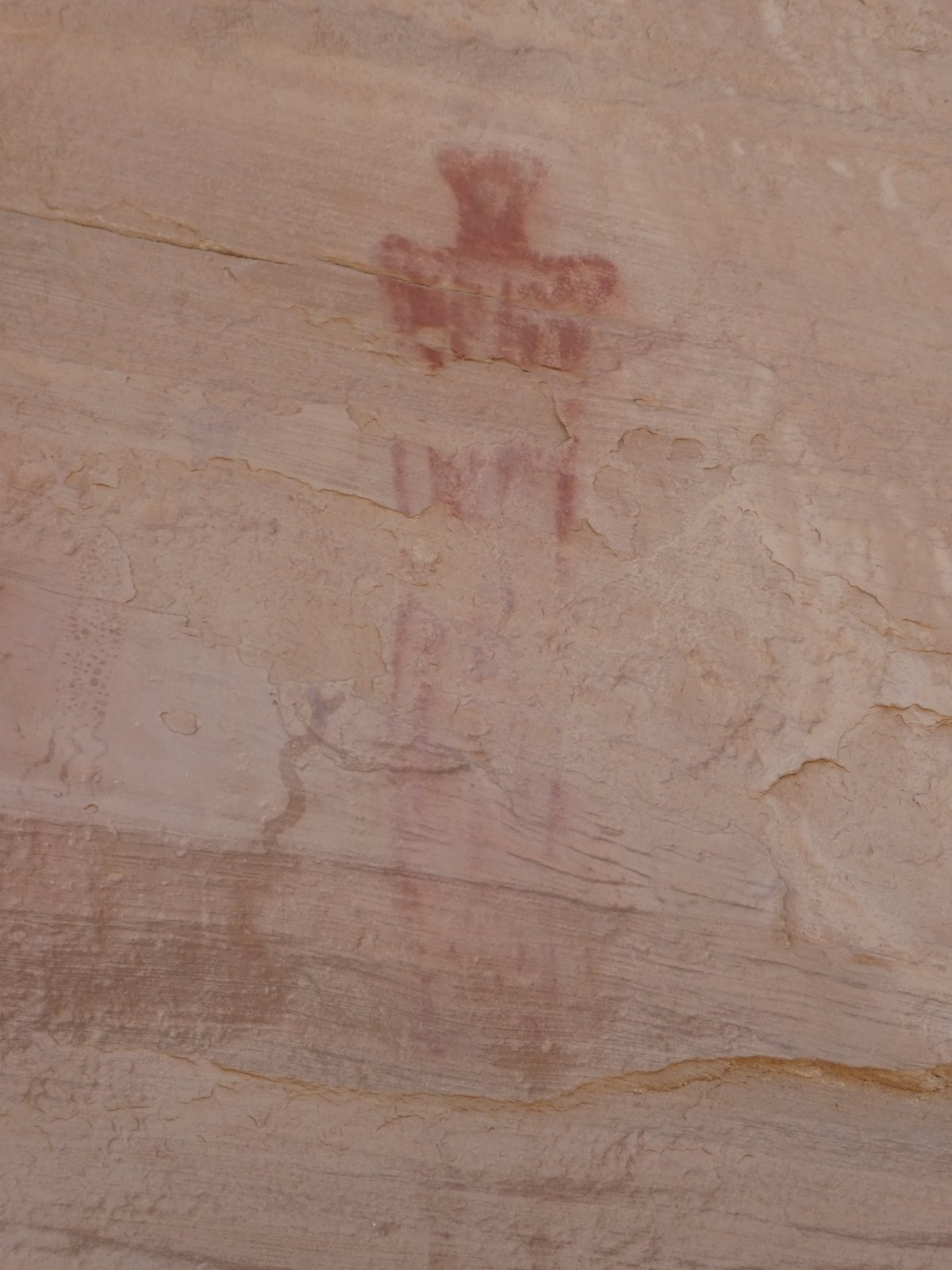 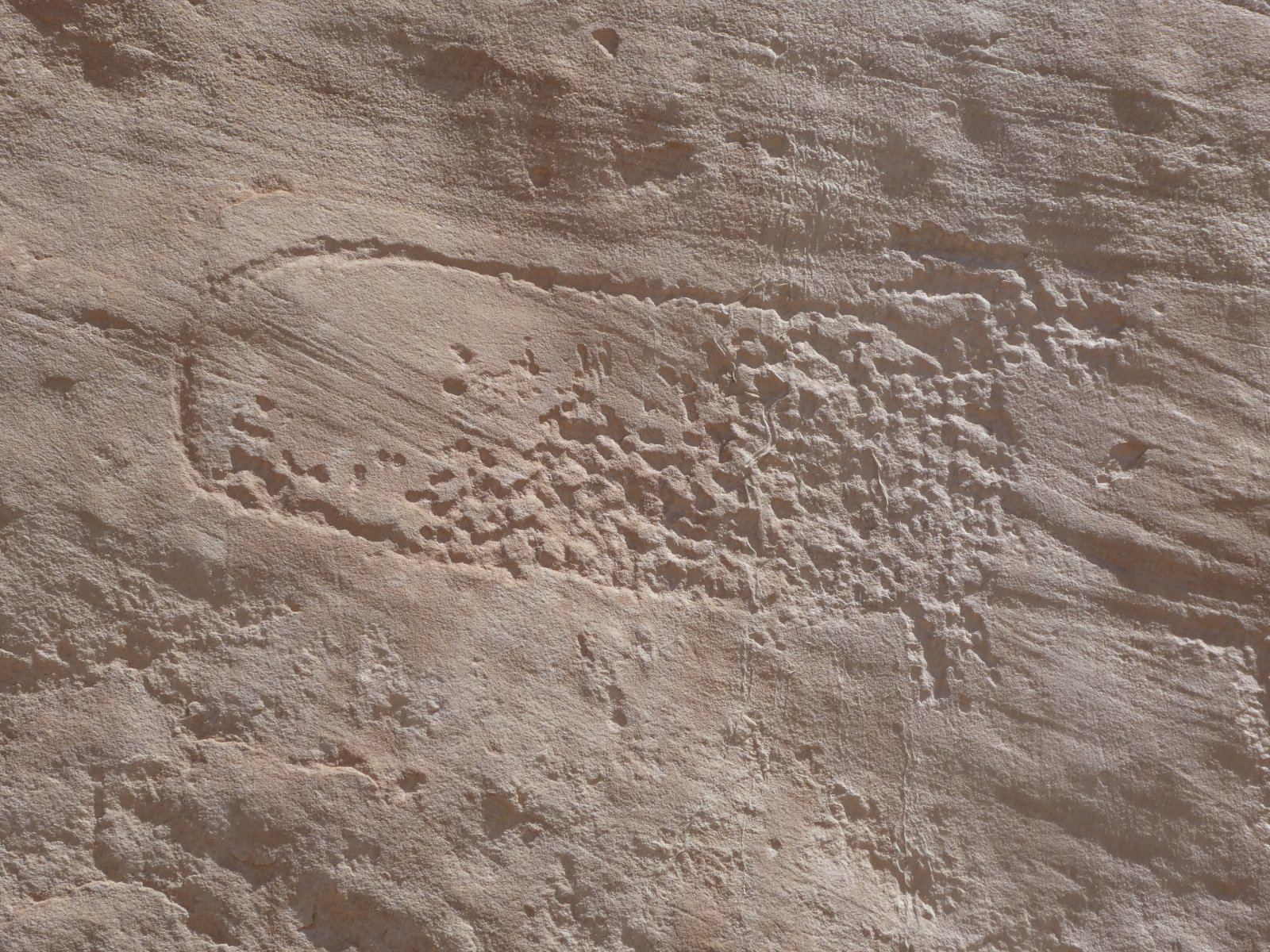 We found some other petroglyphs near the end of the hike, but nothing to write home about. From there we drove over to the Three Finger Petroglyphs and were far more successful on this hunt! It's an unusual site in that there were glyphs on the "floor" of the alcove. 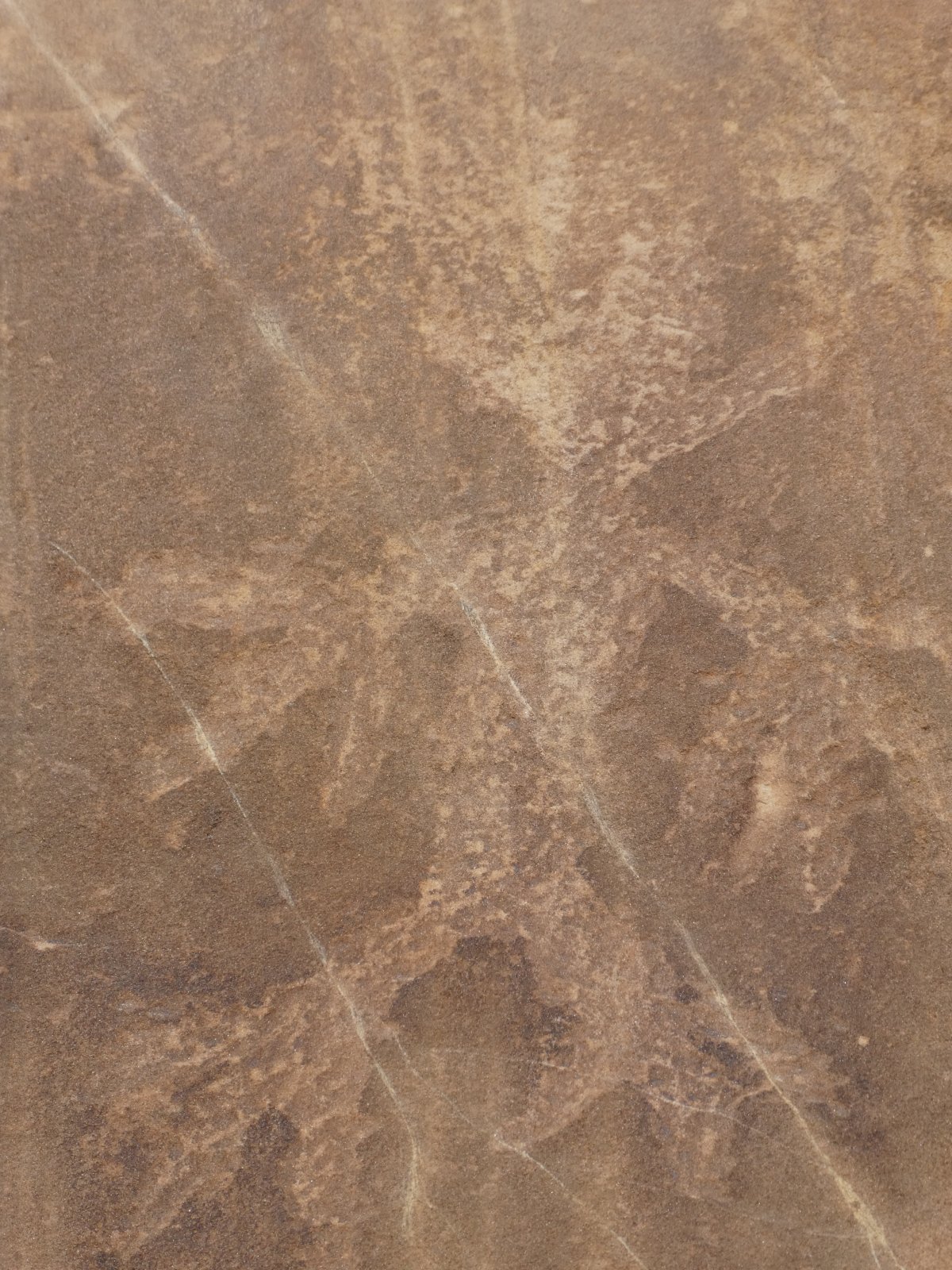 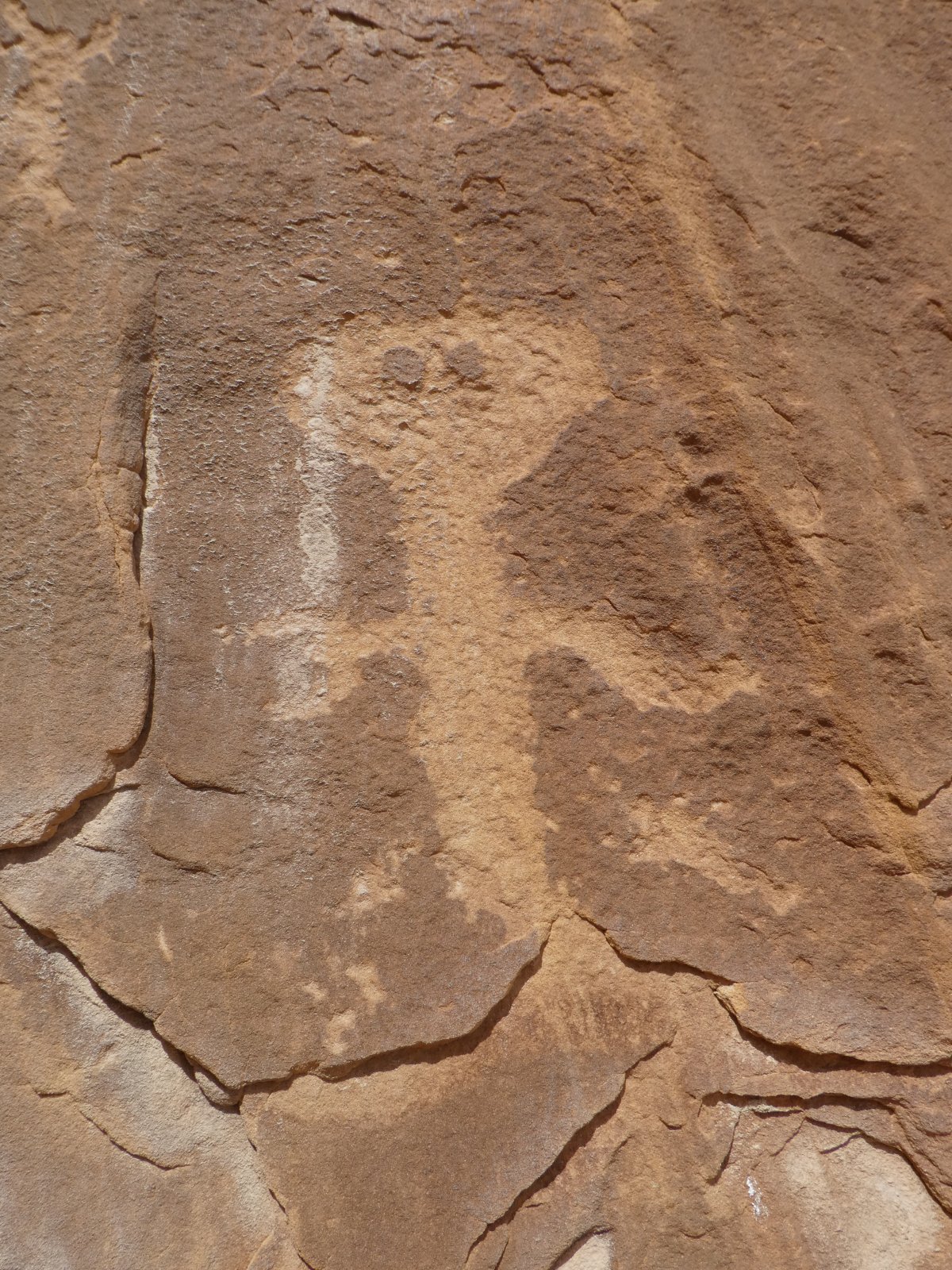 Faint paint over the figure's chest: 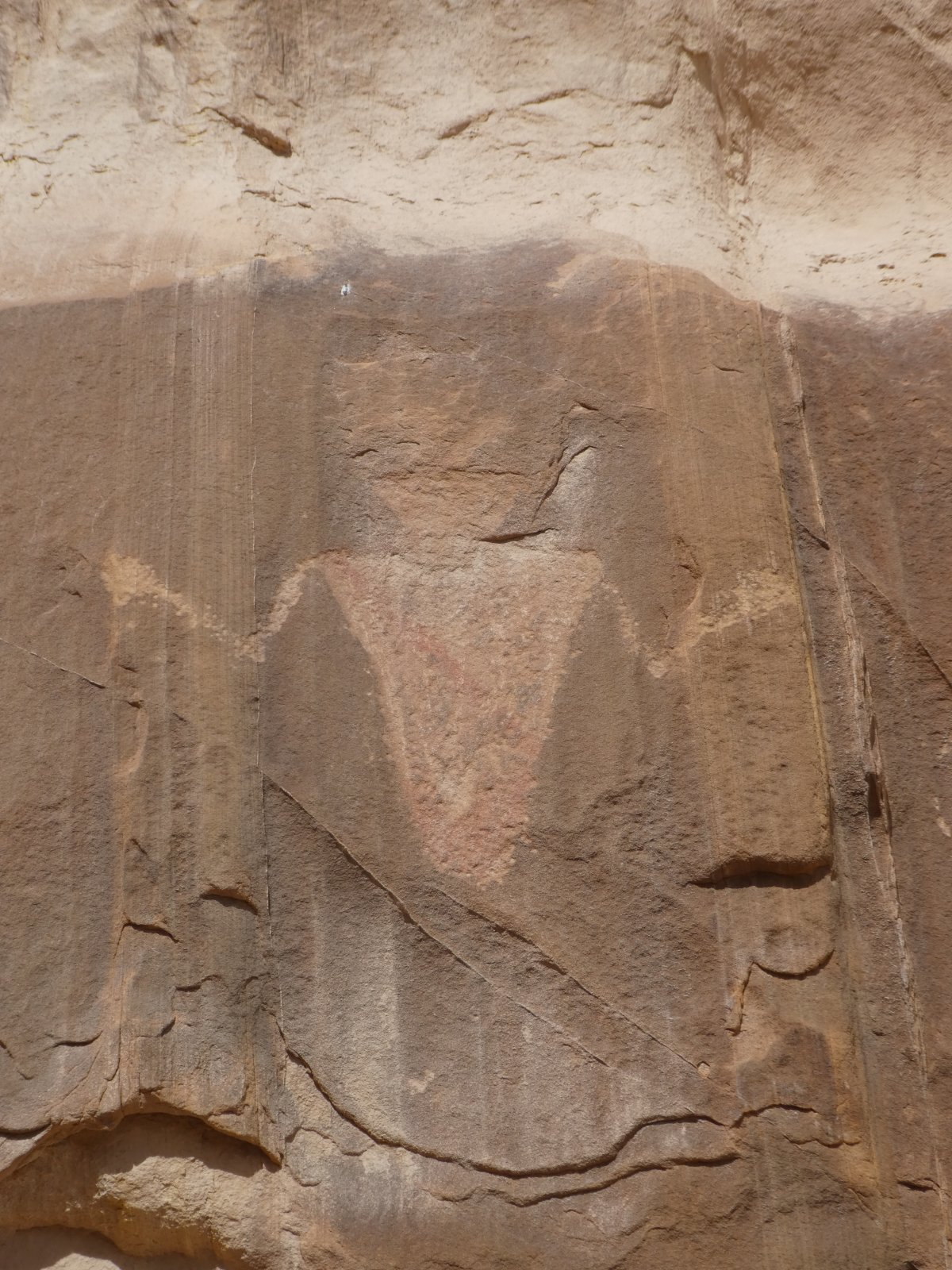 We got back to camp and enjoyed the evening 'round the campfire with Dennis #1, Dennis #2, Miya, and Bobbi.

Friday morning we headed south to check out Wild Horse Canyon. Once in the canyon proper, the walls quickly slot up: 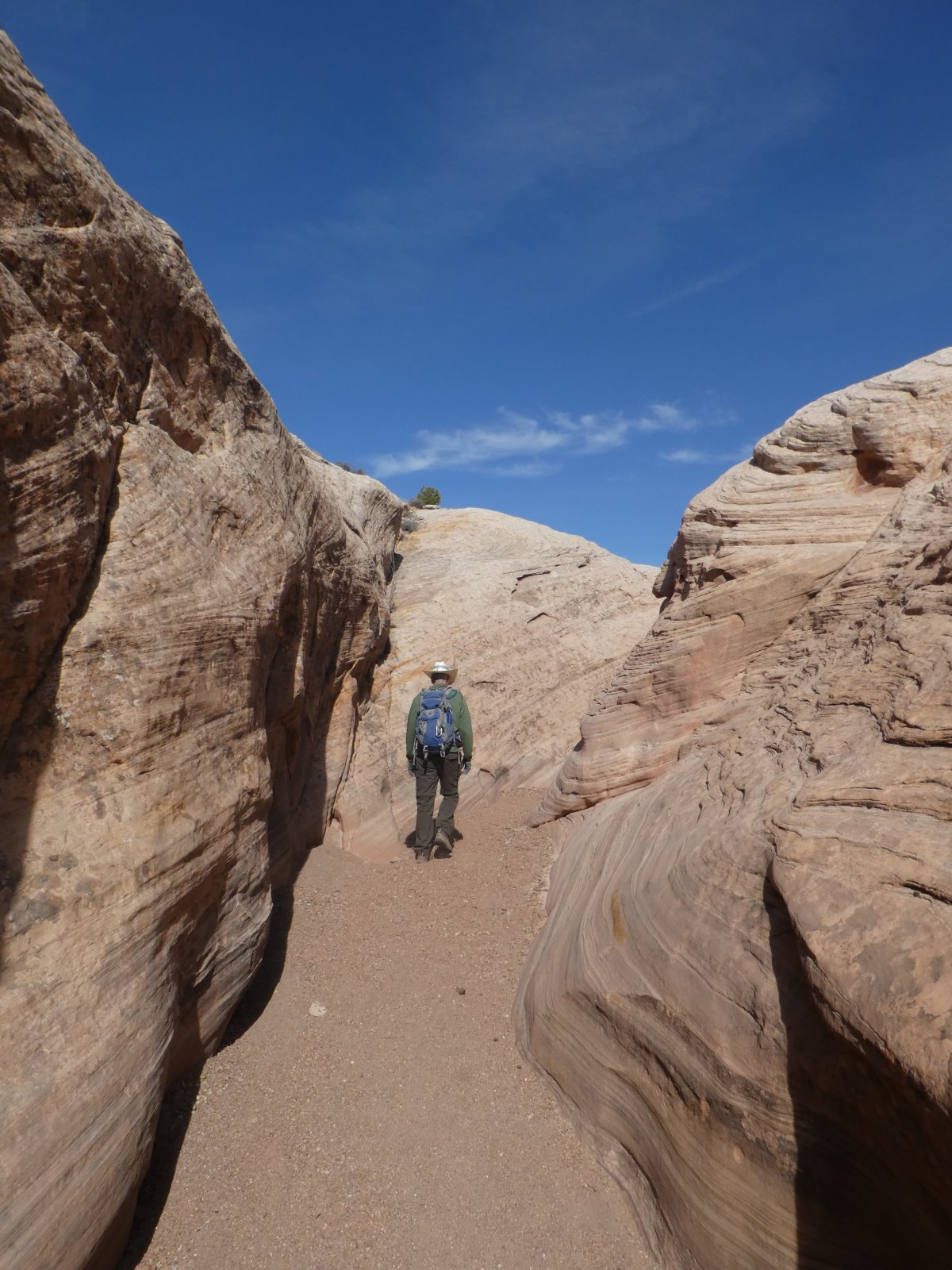 The "slottiness" doesn't last long, though, and the canyon rapidly opens. After about a mile into the hike the alcove containing the pictographs came into view and, wanting a closer look, we started sorting out how to get up the steeply inclined slab of sandstone. Eventually, we resorted to crab-crawling over to the alcove because standing up and hiking over was too unnerving.

We liked the fines details in the panel: 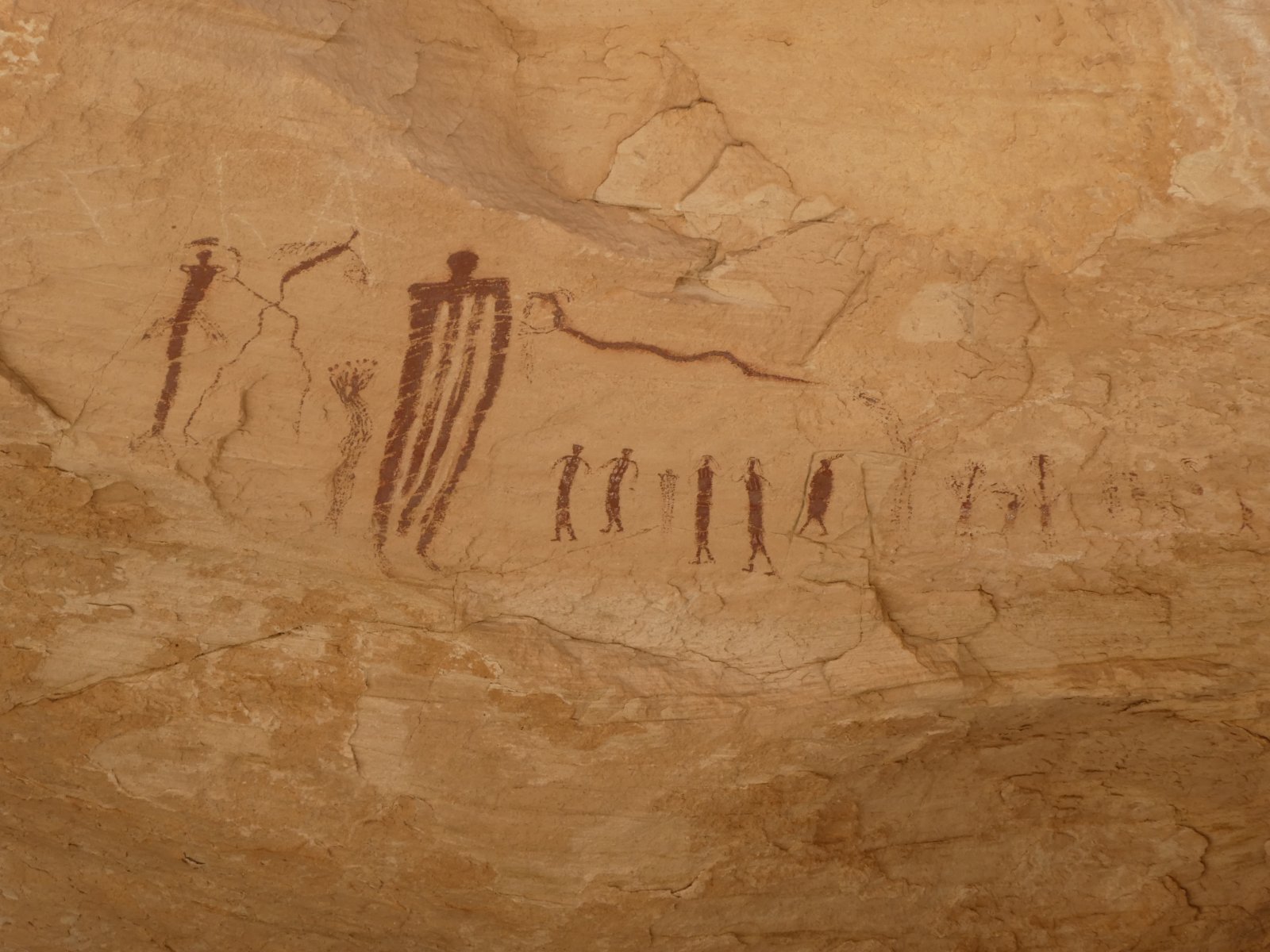 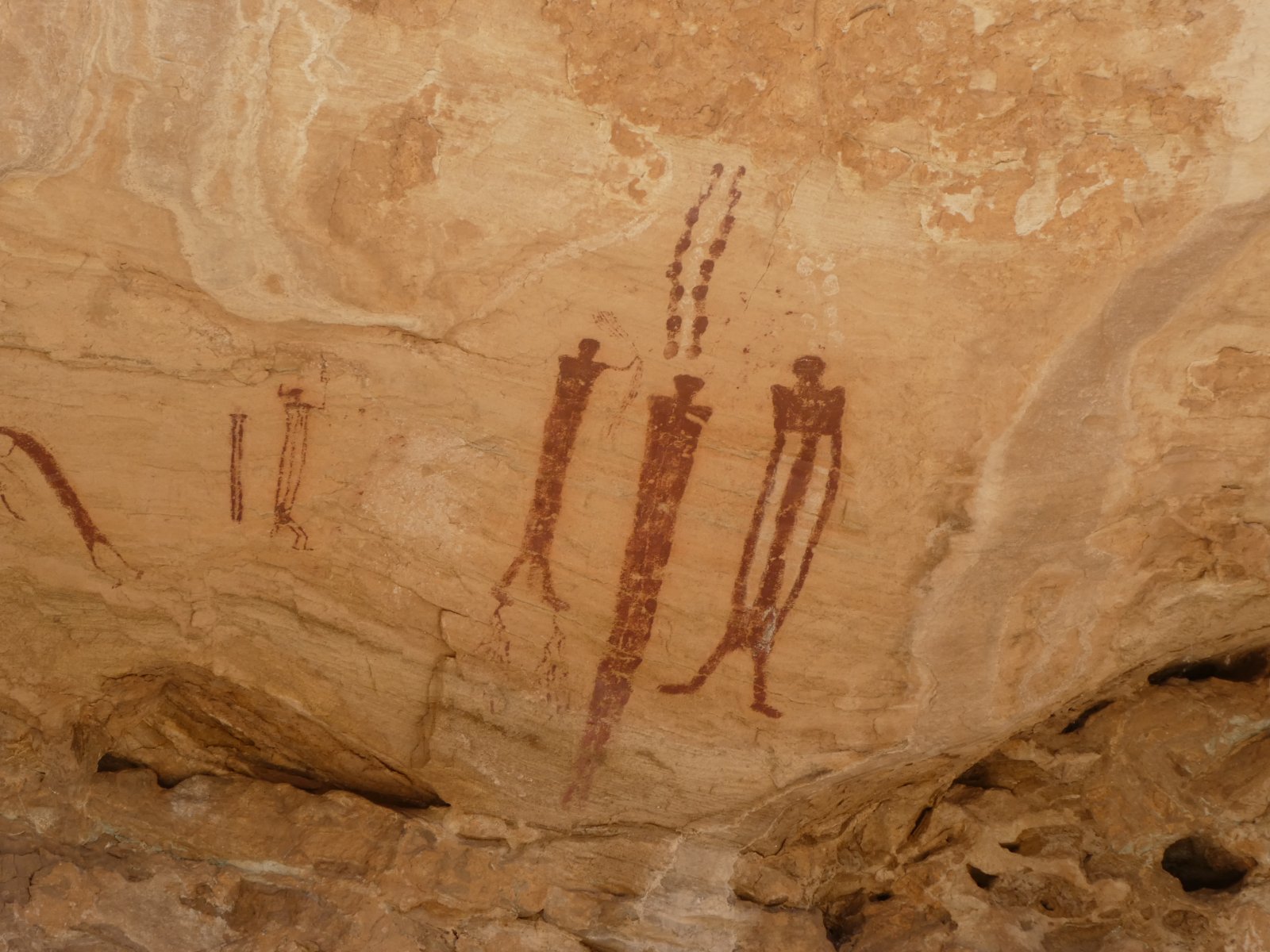 We had planned to rappel in Goblin's Lair that afternoon, but a nasty, oozing cut on Blake's hand prompted us to spend a few hours in the Green River medical clinic. Note for future adventurers: Hanksville has a doc come in every Wednesday whereas Green River's clinic is open Monday - Friday. However, at present, there's not a pharmacy in Green River. Closest pharmacy is another 51 miles away in Moab.

Anywhoooo, we got back to camp late that afternoon and got to meet more BCPers (including a very large, yellow banana named Chris). It was a fun evening with many persons acting as a human rotisserie around the fire.

Saturday morning, gluttons for punishment that we are, we drove out to another section of Old Woman Wash in search of yet more rock art. Same as a couple days before, we came up dry. Grrrrr.... I think we would have found it had we had more time and not needed to hustle back home (and to the pharmacy).

We did manage to capture some "blue sky" photos, though: 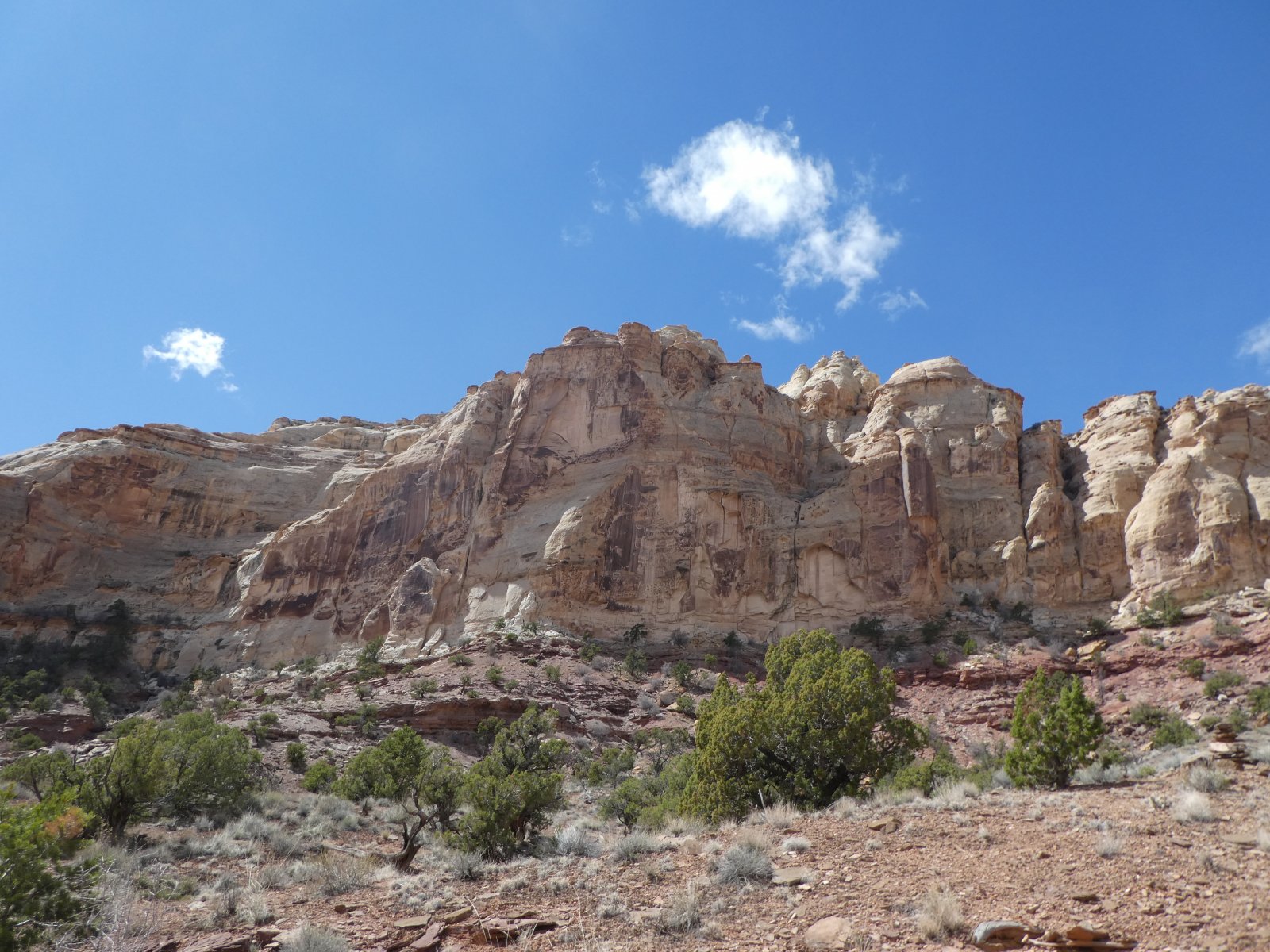 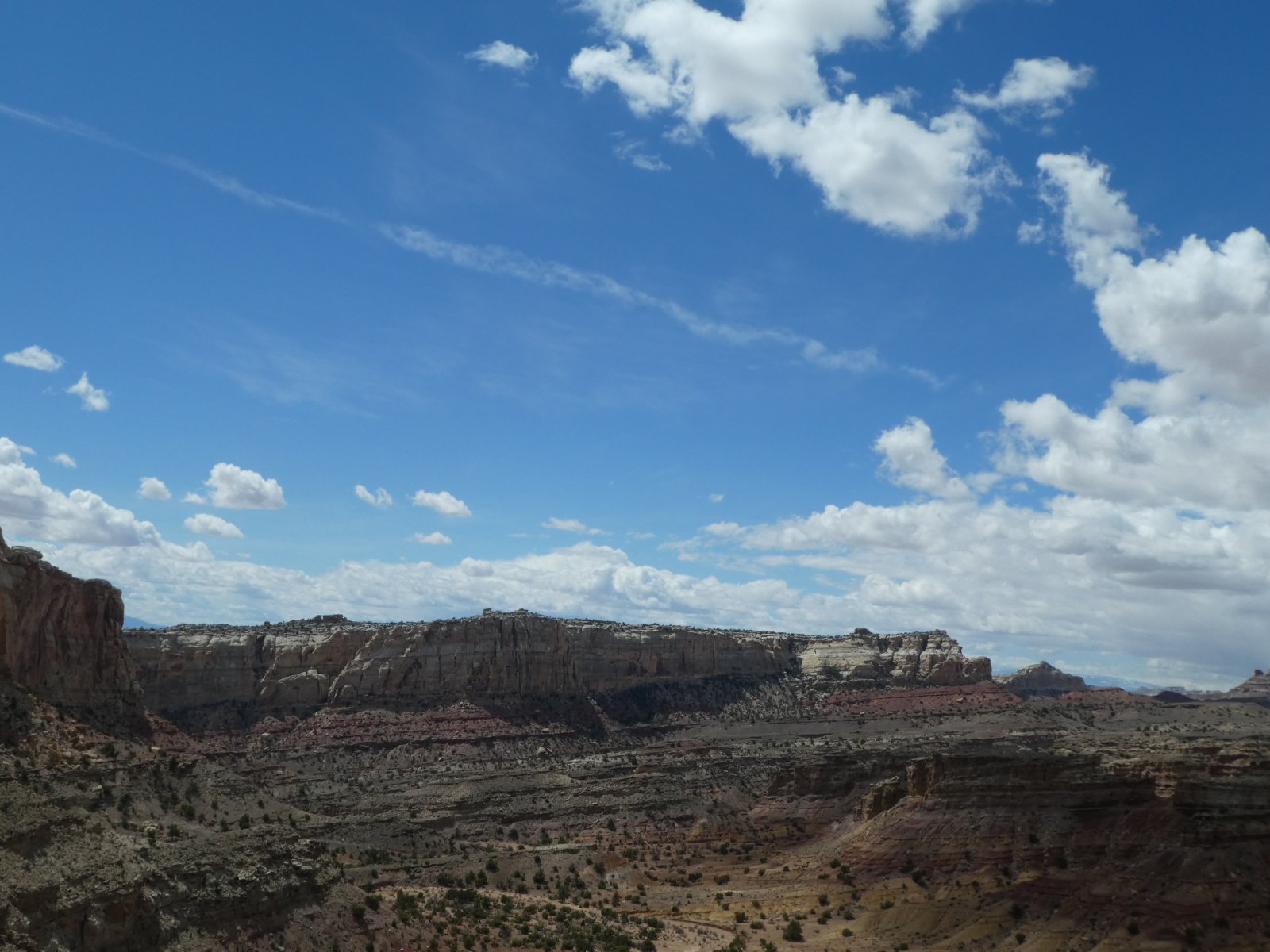 With a greater understanding of the Swell's layout and an appreciation for what it has to offer, I'm sure we'll be revisiting in the not-to-distant future.

Just an FYI about the Green River clinic - they order meds from Price and can usually have them by the next day.

Your photos brought back some really good memories of times in the Swell before it got so crazy.

Rockskipper said:
Just an FYI about the Green River clinic - they order meds from Price and can usually have them by the next day.
Click to expand...

Love that area. Did you notice he striking snake in the “faded headdress” image? To the left of that figure is another figure with two smaller snakes striking and in between is a very faded thing with a lot of pointillism and three squiggly tails or snake things coming down from it And you can sort of see that portion in your image too but the others are cut off. I think is was less faded when we found it, several more figures here and there and three sheep in a slightly different hue. We didn’t know about the panel ahead of time and stumbled on it after a long day of exploring. A bit to the west we came upon a rather good and very colorful lithic scatter. Dinosaur tracks are not far to the north, a set of three and one of them is very clear and sharp, a smaller three toed variety. The whole landscape there by the folds of the Reef is surreal.

I noticed the snake only after seeing the photo. Didn't see any lithic scatter, but we weren't purposely looking for it.

Darn! We did Wild Horse Canyon too and didn't see those pictographs! They look so vivid!

Miya said:
Darn! We did Wild Horse Canyon too and didn't see those pictographs! They look so vivid!
Click to expand...

Same here...although if I remember correctly they're located up near the canyon's rim, there's no way you would see them or know about them if you were just walking the bottom.
You must log in or register to reply here.
Similar threads