My daughter and I stopped by this park for a first time quick visit on our way back to Seattle from Glacier NP. We were expecting a point of entry with a booth but never saw one. We drove in from the east and were impressed by the mountain scenery in the fading light of the day but never saw any facilities so we were never sure if we were in the park or not. There were lots of campgrounds and one of them had a park map. The next morning we drove to the VC and hiked the River trail while waiting for the facility to open. You can kind of see how the sunlight was tinged red on the ground from the smoke in the air from all the fires in the state. Some of the fires were smoldering inside the park right nearby but we never saw any flames. 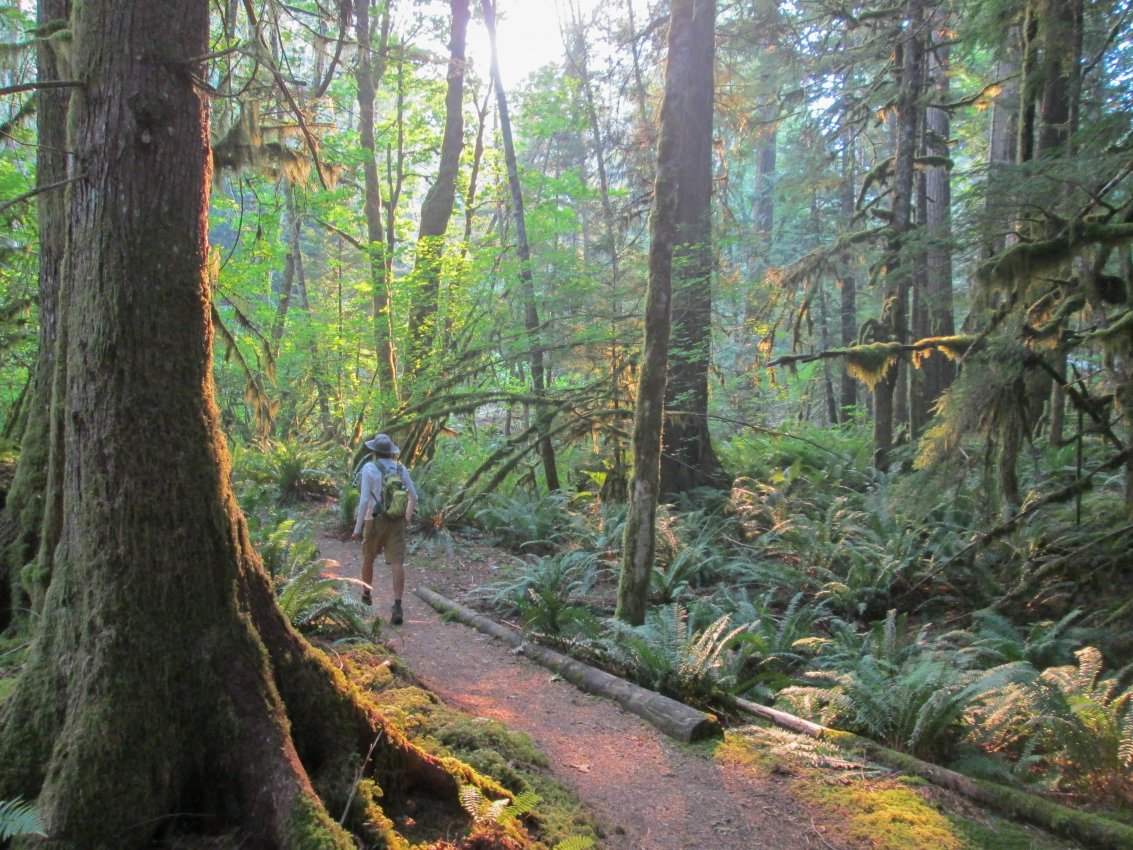 The Visitors Center is first class with some great displays. We asked for a challenging day hike that would show off the alpine scenery of our short stay. There were a lot of fires in the area affecting things but the ranger was able to direct us to a good choice called the Cascades Pass trail. To get there we had to drive out of the park a bit and then 23 miles along a forested single lane road that ended as dirt but it was in good shape for most of the way. It took a long time in the rental car but we finally reached the end of the road in a small clearing at the base of a glacier. The trailhead is at 3640 ft and the Cascade Pass is at 5384 ft. After 35+ well sloped forested switchbacks out of the parking lot we finally popped out above the trees to find we where already eye level with some glaciers. 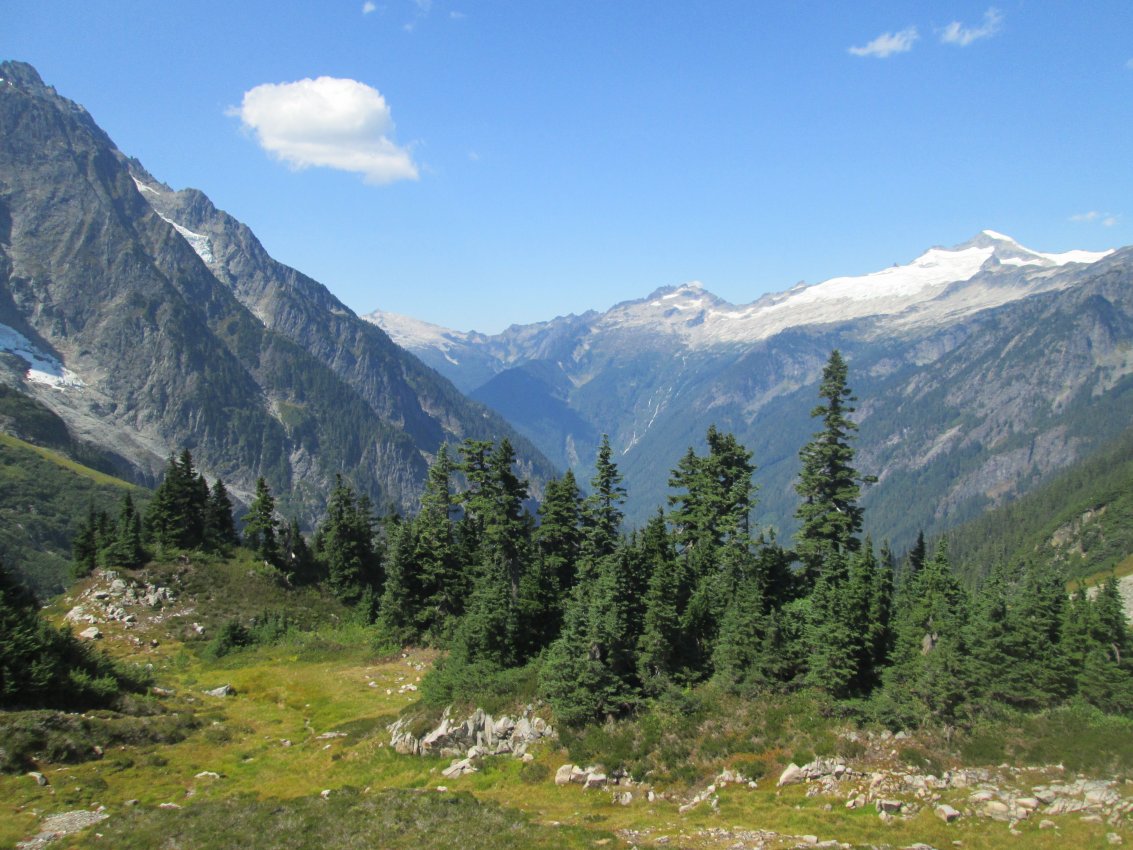 Here is the trail as it climbed the final slope to the Cascade Pass. 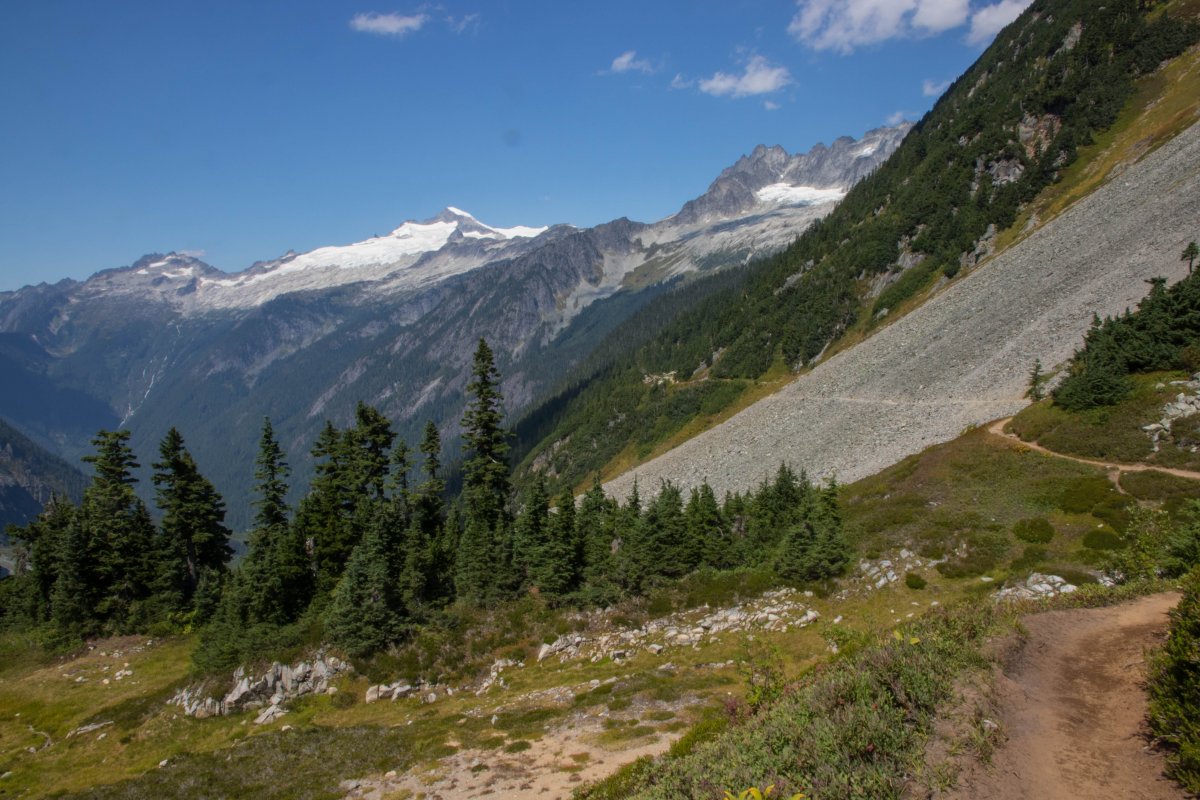 Once the pass is reached after 3.7 miles, it pays off to continue higher. The mountain vistas just kept getting better. This park has more glaciers than any other park in the lower 48 and this hike really showed them off. It was hazy in some directions but much of the time we had blue skies particularly to the North. We elected to hike up to the Sahale Arm, another 2.2 miles and some 2000 more feet in elevation. Again the slope was not too demanding until the final gravelly slope just below the Sahale campground. 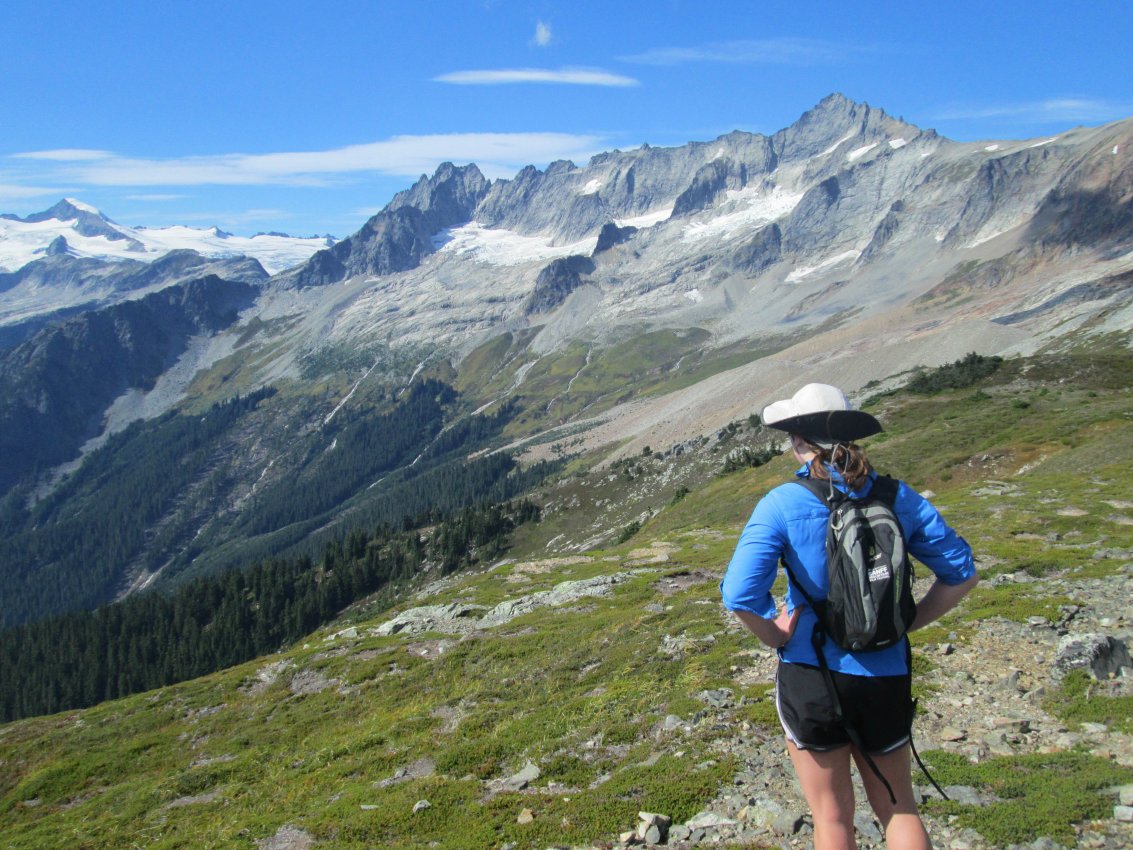 Along the way we passed Doubtful Lake 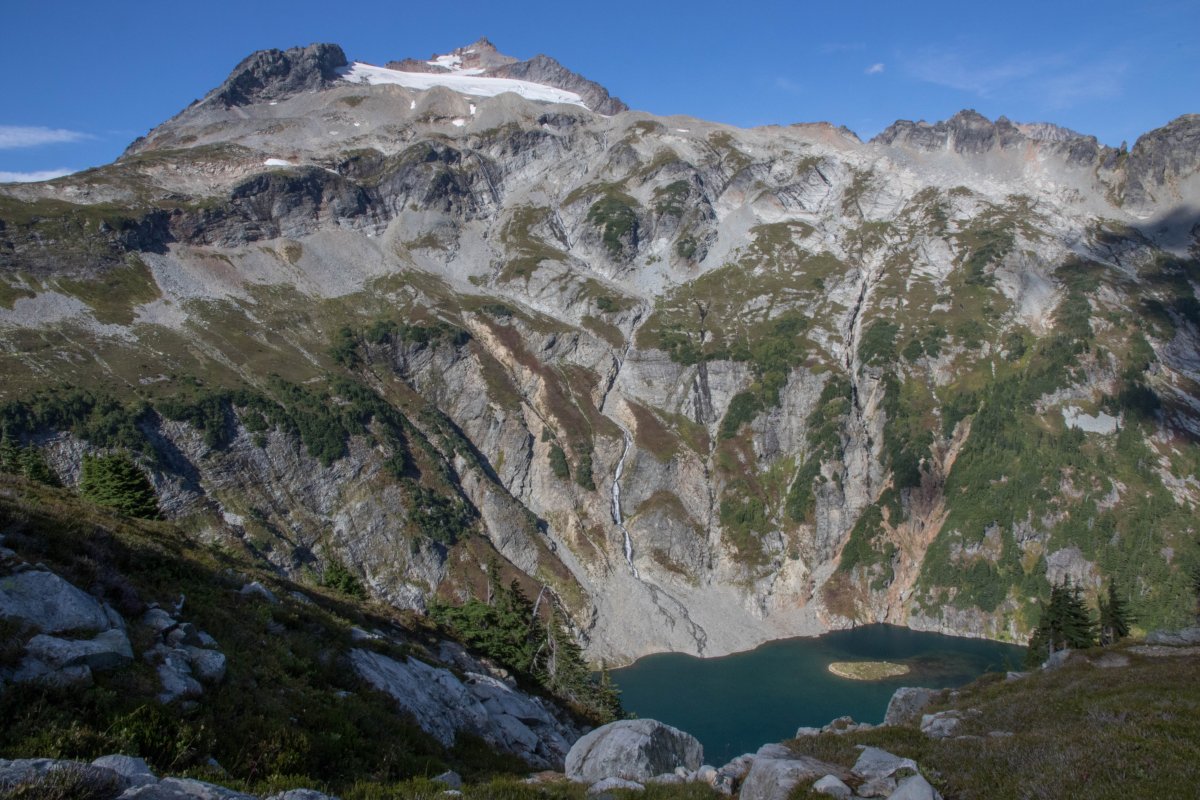 Some wildlife; Bluebirds and a Marmot with what looked like a mohawk streak of white 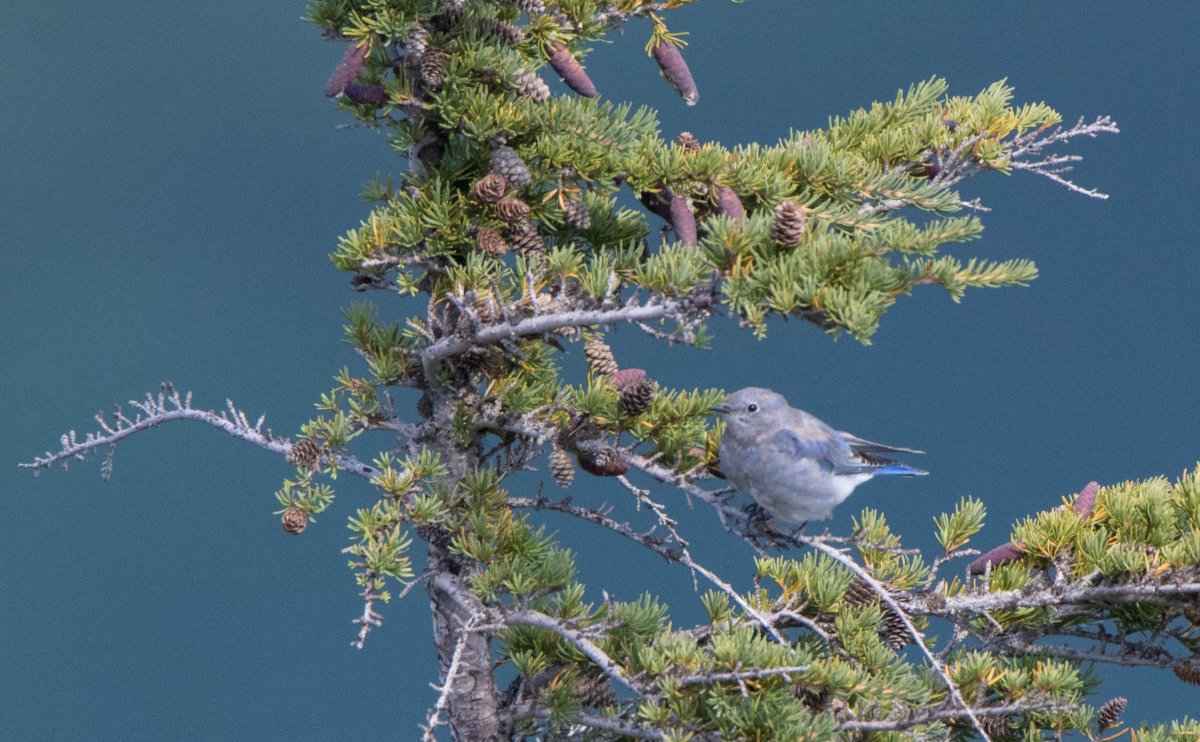 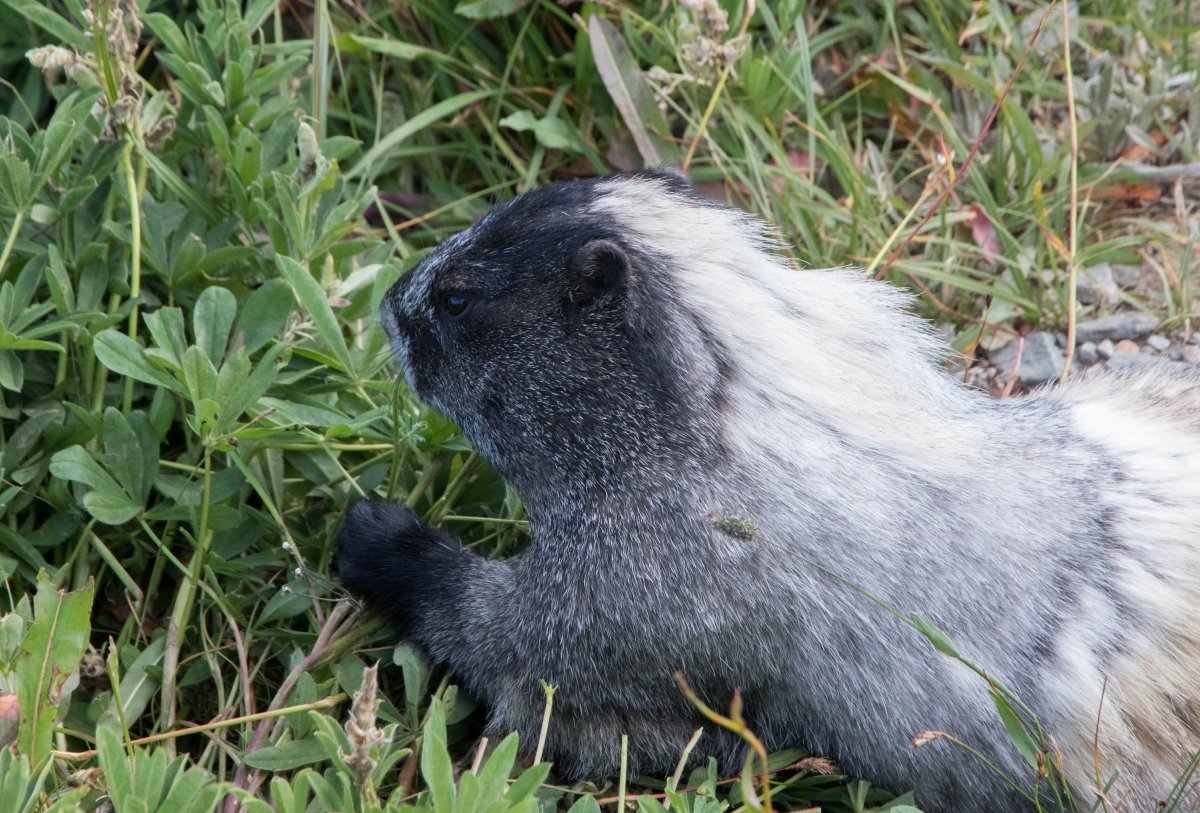 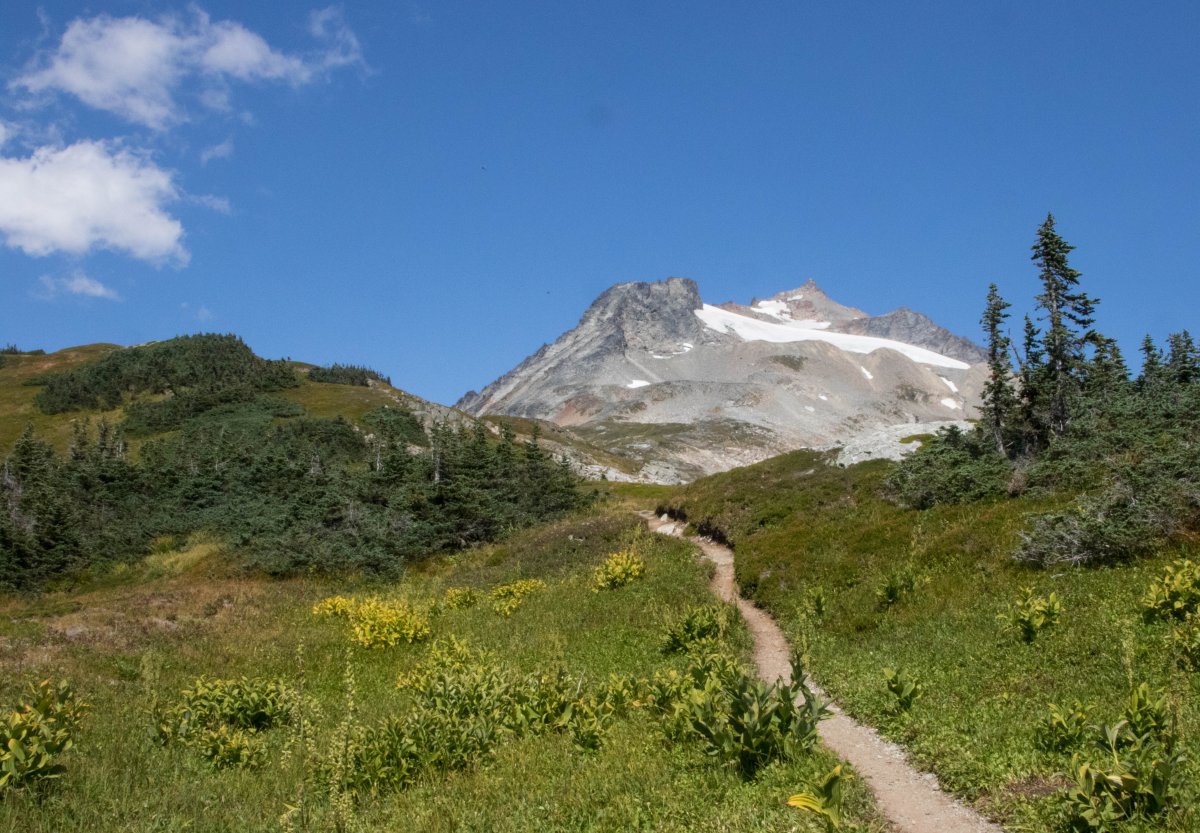 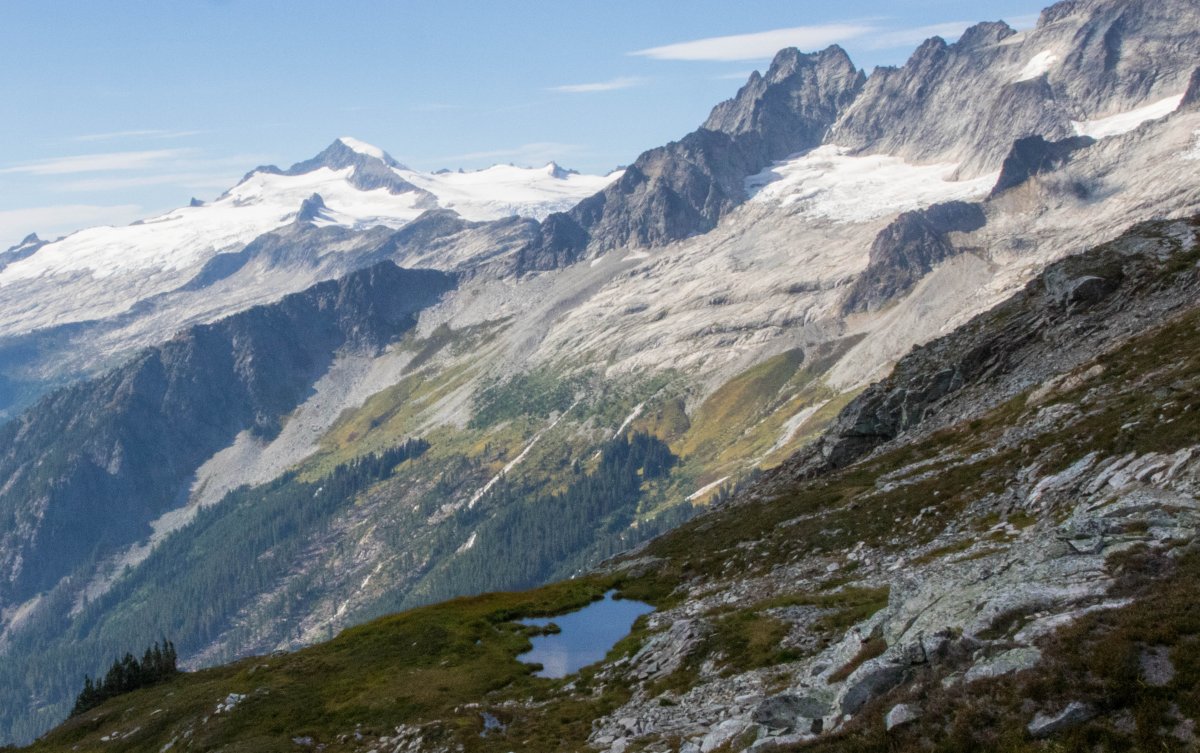 There were a lot of low juniper berries and the occasional blueberry . 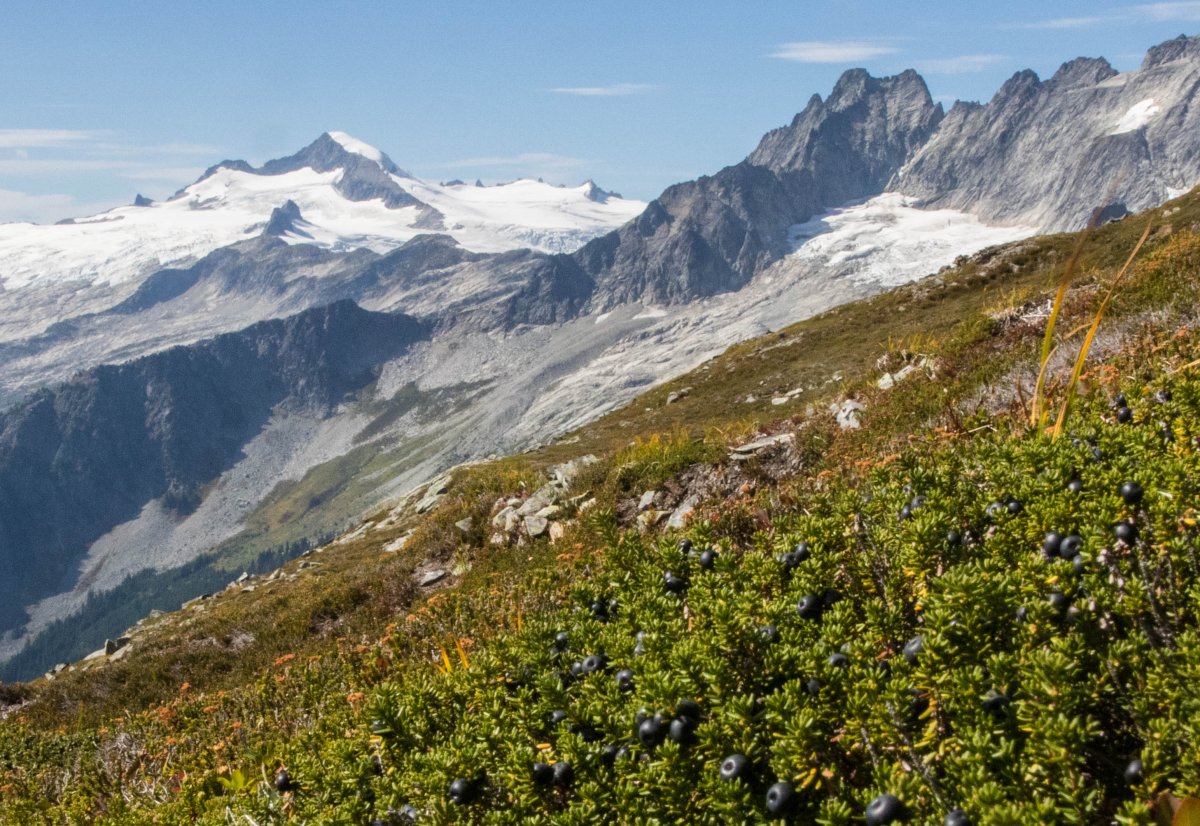 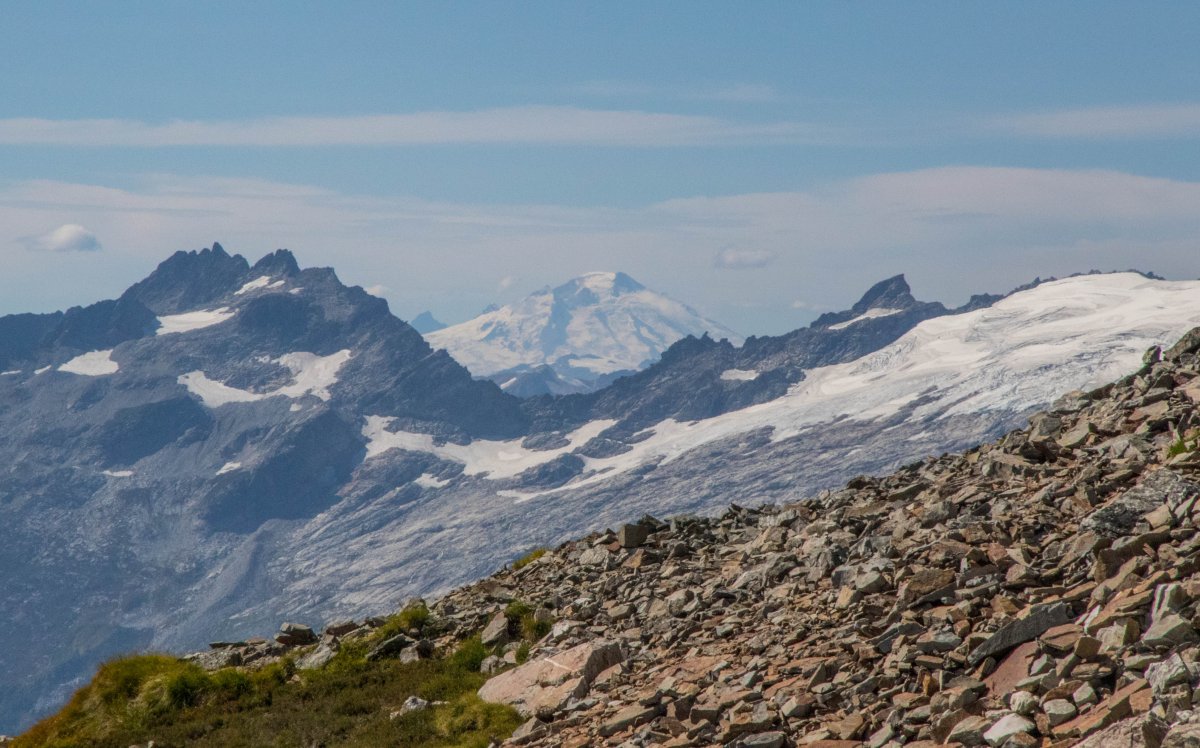 We did not explore the lower parts of the park other than a campground and the VC but what we saw up high really impressed us. The high alpine meadows were plentiful and visible in many directions. I would definitely explore this park more if I lived closer. The Ranger said that black bears and mountain goats were common during certain times of the season on this trail. We did not see any, but were very happy with what we saw on just a long day hike from the car.
This hike concluded what had started out as a desire to do the Rainier 97 mile Wonderland trail. With permits hard to come by for that , we adapted , and the trip morphed into a 12 day 3 National park hiking extravaganza. Holly calculated we did over 100 miles on the trail, hiking almost every day. Twenty of that was with full packs on but since I was carrying my full camera gear the entire time there was not much difference between my daypack weight and my full pack weight. It was a really a great experience to share together and we came back feeling much stronger physically and mentally. What more could you ask for from a vacation? 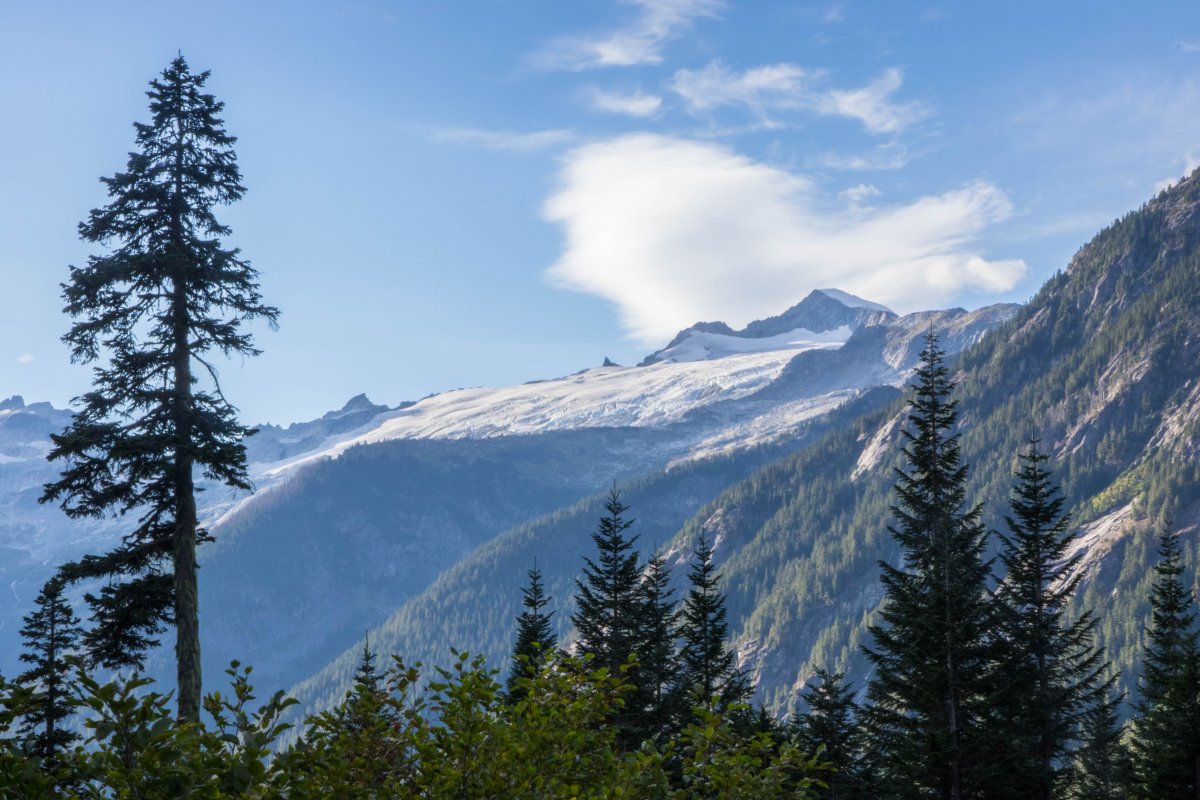 We've been in short sections of the park on trips to other destinations. We really need to explore the park further! 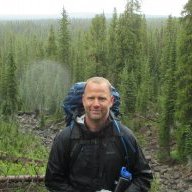 Tim Valentine said:
I would definitely explore this park more if I lived closer.
Click to expand...

Thanks for sharing. I keep thinking I need to get up to Baker but there are so many closer options I never seem to get up there. You have definitely given me more incentive to drive a little further some weekend. I'm glad you didn't get impacted by the fires -- they have some closures now up there.

Amazing place. Can't wait until I can get back there again. 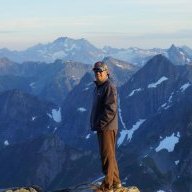 Our first real hiking trip was to the North Cascades a few years ago, and that Cascade Pass / Sahale Arm hike is fantastic. Thanks for the report and those views. What a great way for a father and daughter to spend a couple weeks.
You must log in or register to reply here.
Similar threads