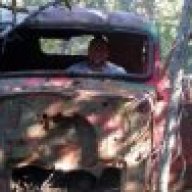 I first heard about the Tie Hacker's when I came across a youtube video by Cordell Andersen, more can be learned on his website http://www.cordellmandersen.com. This got me very interested in the history of the Uinta's and I became obsessed. Of course I've alway's been obsessed with the Uinta's themselves, this was just one more aspect of them for me to obsess about. Anyway, one day while looking on google earth for a good spot to go fishing or something like that, I came across this small meadow on the north slope which appeared to have the outline of several cabins in it. I had viewed some of the cabins of the Black's Fork Commissary and these looked just like those did. I started researching and could find nothing on this area, so I knew I had to go and explore it.

Here's the map of the area (I just drew the path on google maps, it's not gps track)

View larger map.
So in September of 2012 I picked up my sister Maygen and we headed up weber canyon past Evanston and south on the Mirror Lake Highway. We made a quick stop at the Bear River Ranger Station just South of the North Slope Road to check out the refurbished tie-hack cabin they have there so we could see what one would have looked back when they were in use. 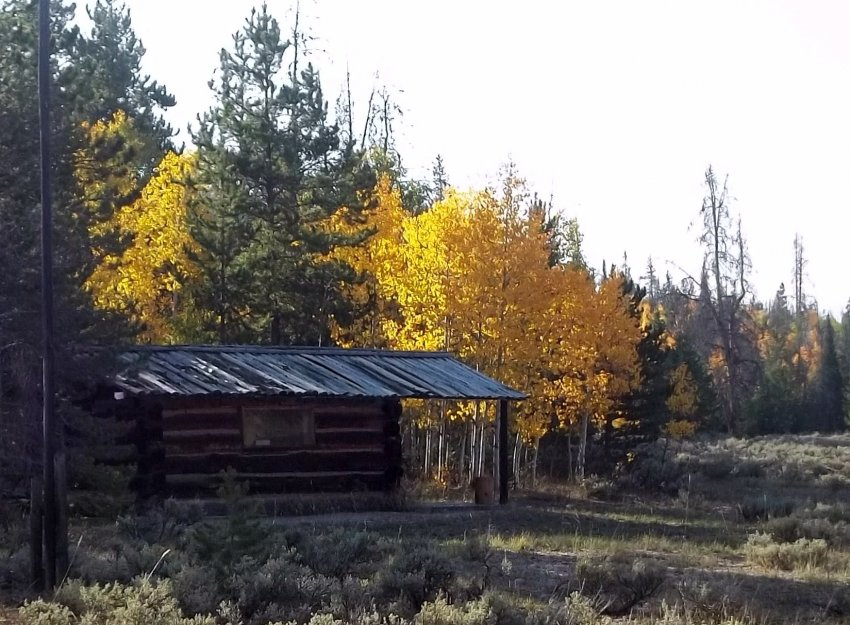 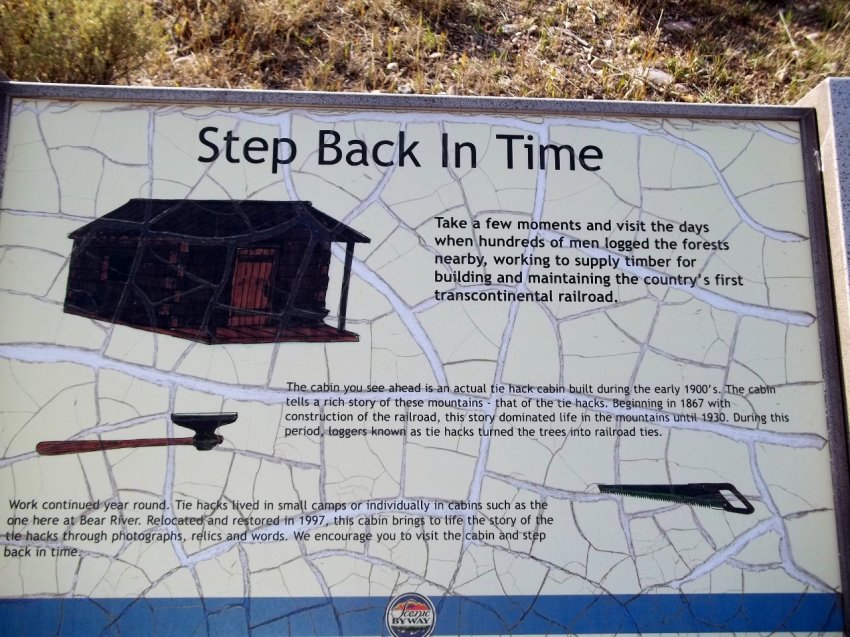 Here is a tool they used to move their logs with/turn them over, etc.

Then we went back north to the north slope road , stopping about 7 miles later to check out the Mill Creek Splash Dam. A splash dam was a temporary dam built by the tie-hackers, they would pile their logs behind the dam and in the spring when the runoff filled the dam they would blow it up with dynamite (hence the name Splash dam) and all the logs would rush down into Wyoming to be picked up and shipped. The dam was in higher, and thicker brush than I'd thought, making it very difficult to see or get a good picture of it. 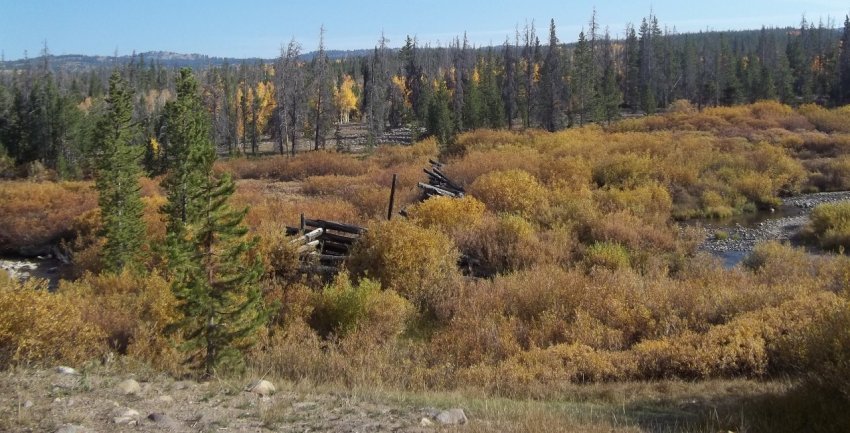 After a few minutes we were back in the truck again, heading even further East on the North Slope Road. At about 11 mile's from U-150 we reached the small logging road I'd seen on google earth which led to the meadow with the cabins. The road was probably passable in my truck, but Maygen didn't want to risk it and you do see more hiking than driving so we parked on the North Slope Road and headed on the logging road on foot.

The first tie-hack/logging thing we saw was a platform for rolling logs onto a sleigh in winter, and when vehicles were more available, onto a truck. 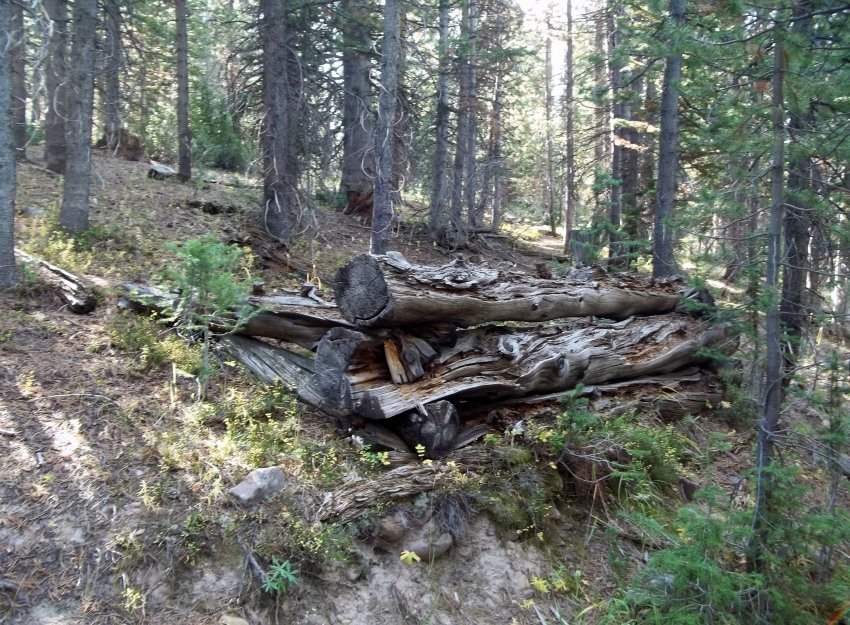 Just before the creek crossing where we'd follow the creek East into the meadow, we found this old abandond logging truck. I'm guessing it's from the 1930's, but I don't know for sure. 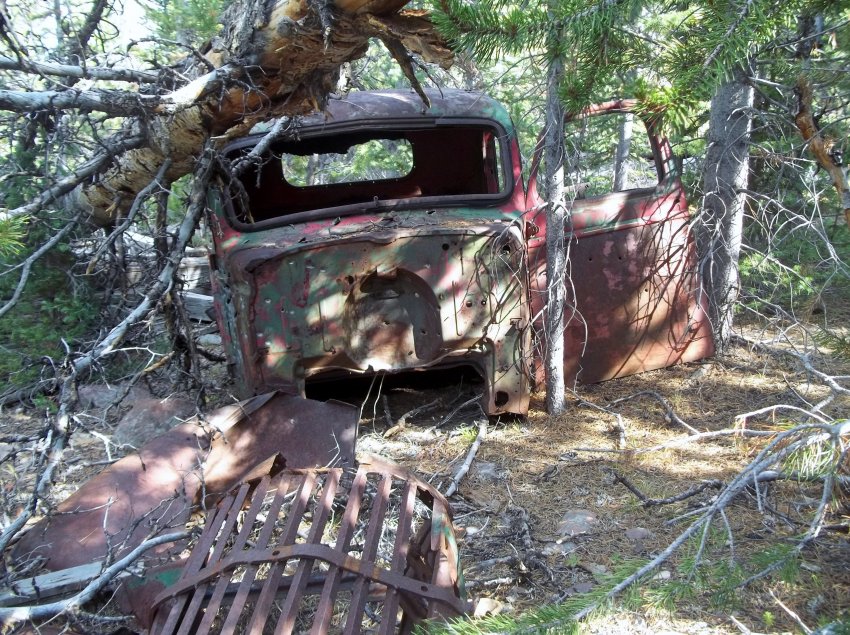 A short distance farther and we reached the stream and followed it East into the meadow, there was old tin cans and other old trash everywhere along the way to the meadow. I was right! It was the outline of several cabins I was seeing on google earth! We spent about an hour exploring the meadow and all the cabins, There were 9 buildings in that small meadow, 1 small cabin, 7 larger bunkhouse type cabins, and a large livestock building/barn.

The first cabin we found.

More Cabins across the meadow. 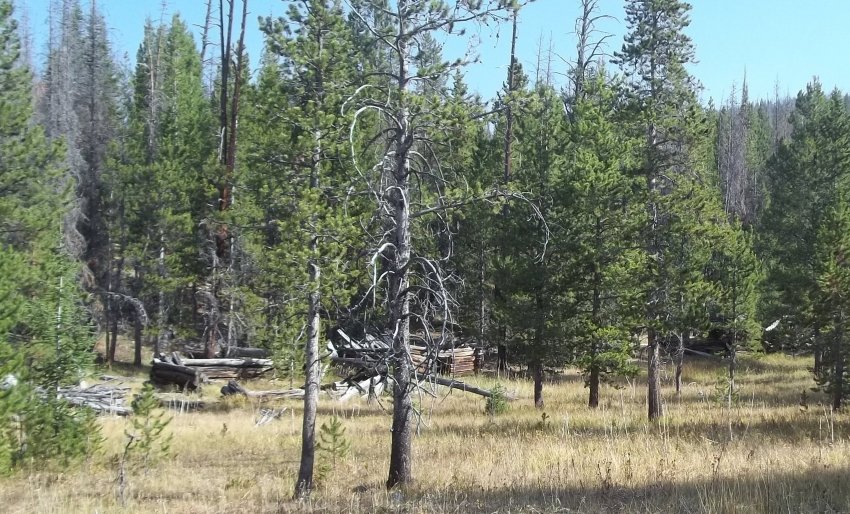 I almost missed this smaller cabin, as it was up the ridge and in the trees from the others. 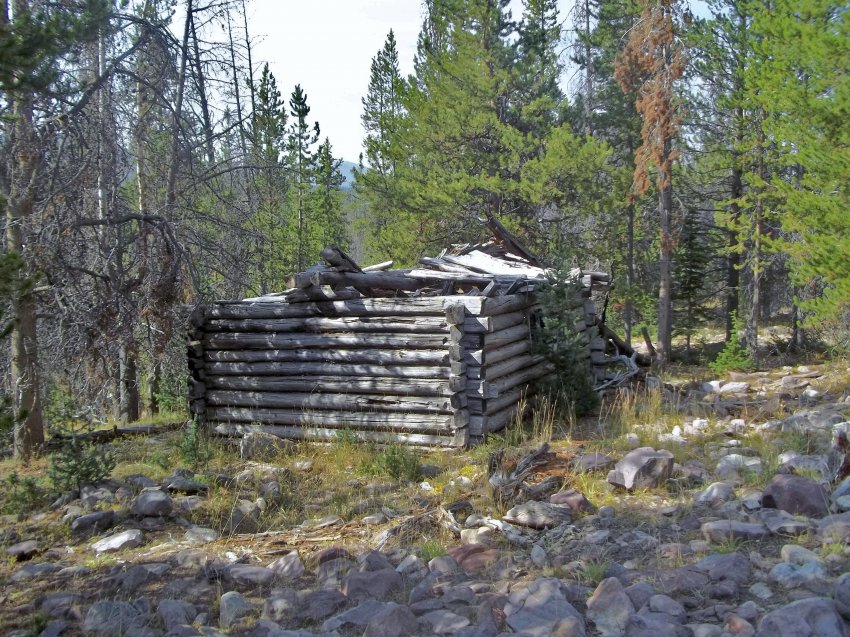 I had hoped to find one with an intact roof, this was as close as It came, too dangerous to enter. 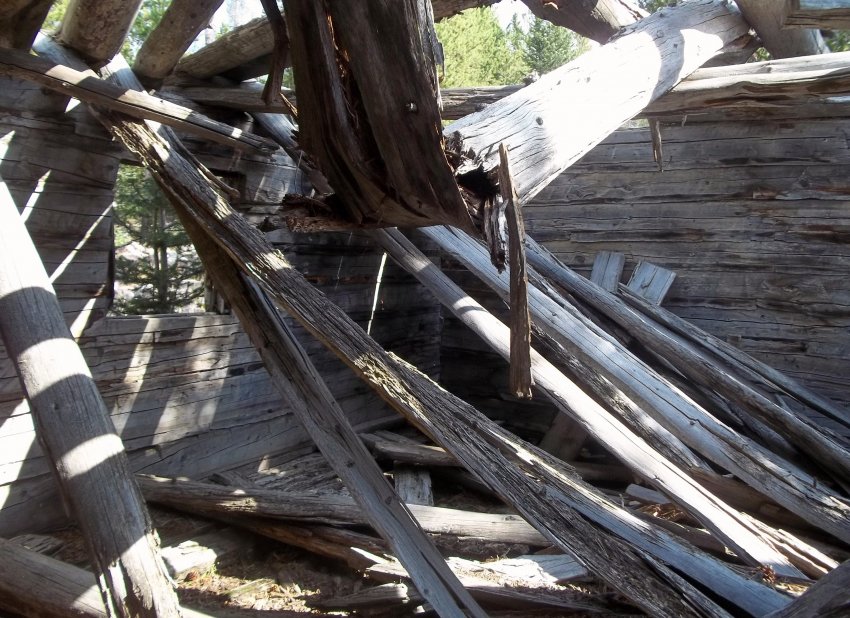 Here you can see the roof poles extending out for a coverd porch. 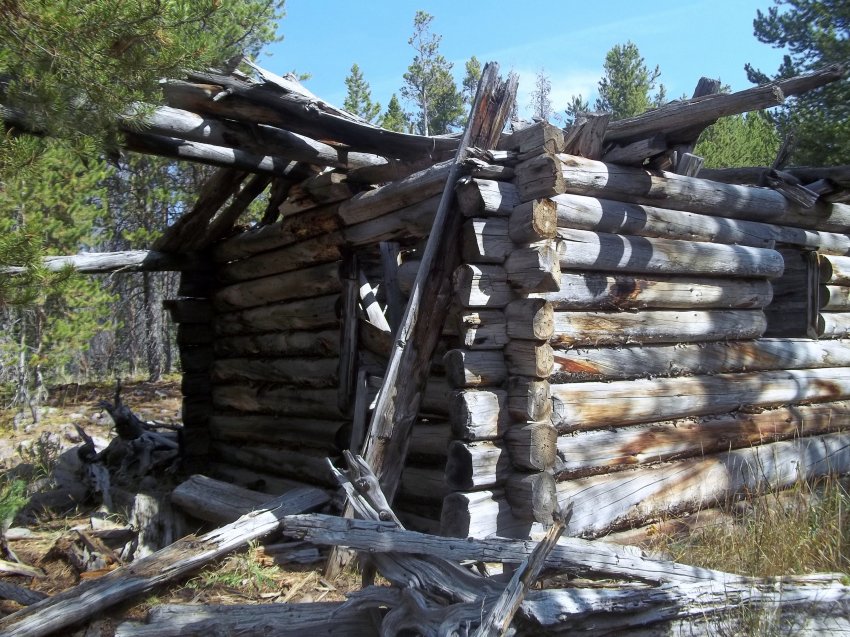 I had high hopes of finding tools, equipment, or furniture, for the most part however we just saw old tin cans and the walls of cabins. We did see this old tool though, the curved part looks similar to the tool in the refurbished cabin at the Bear River Ranger Station, and the flat edge was sharpened like a chisel or scraper. 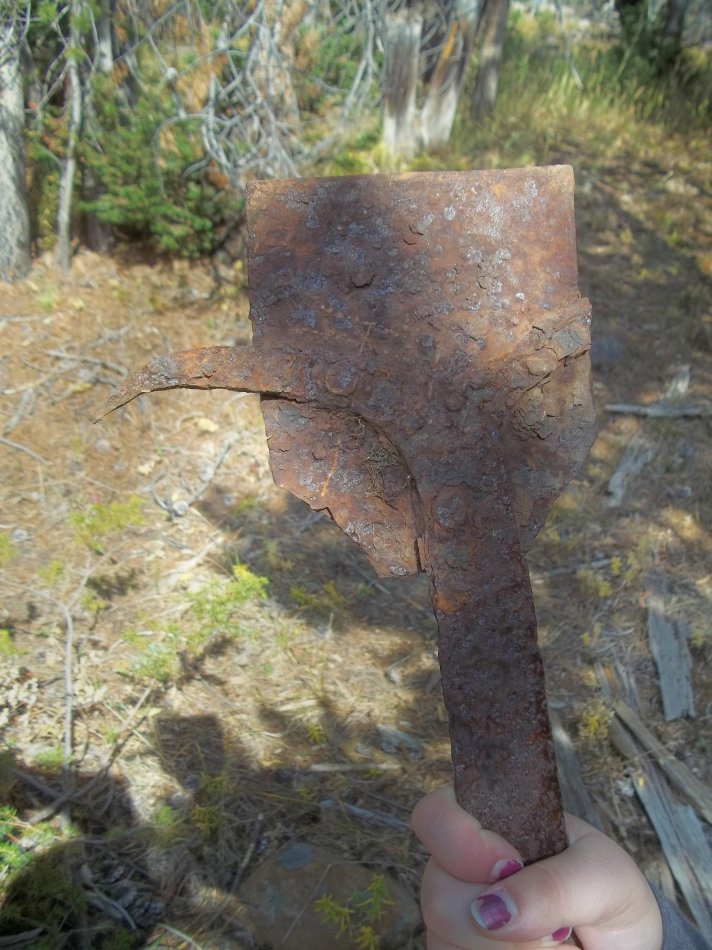 From there we went back to the logging road and NorthWest on a smaller side road to some other cabins I'd seen, there was tons of old trash along the way including many metal cans like this one (this is the only one that was readable). 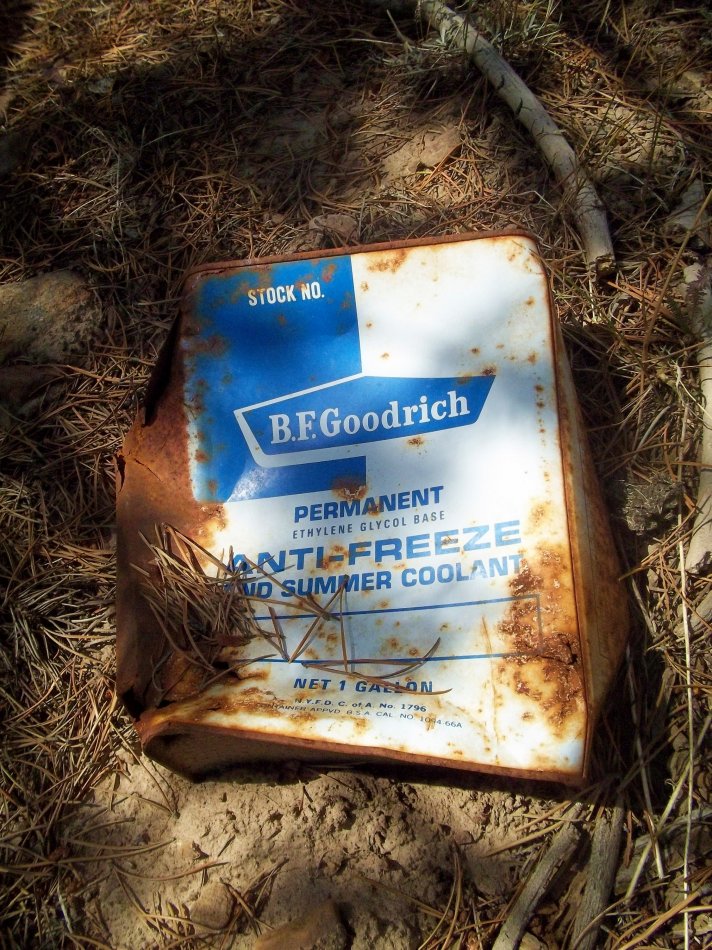 First we found this cabin in the trees, it was probably the nicest looking cabin we came across. 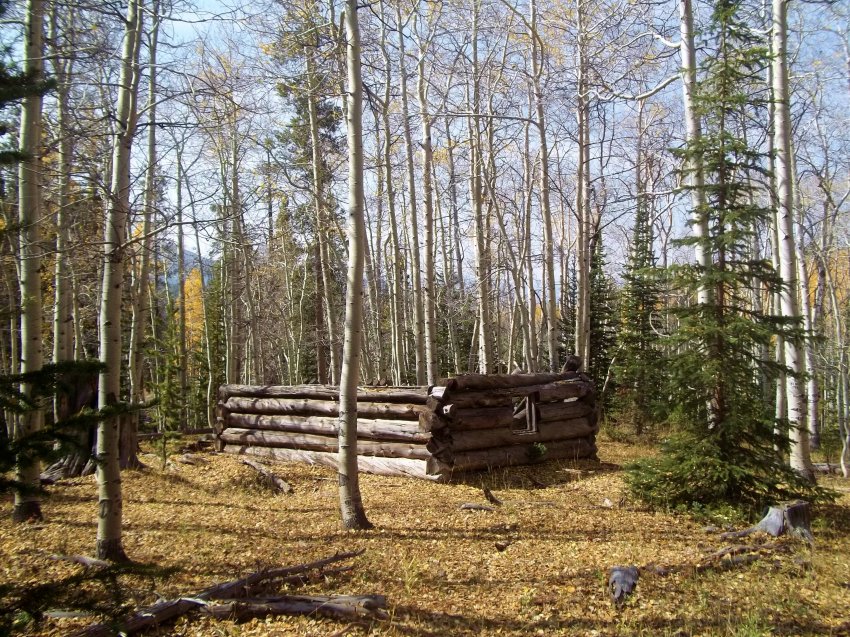 This one had a different style of notching that I didn't see on any of the other cabins. 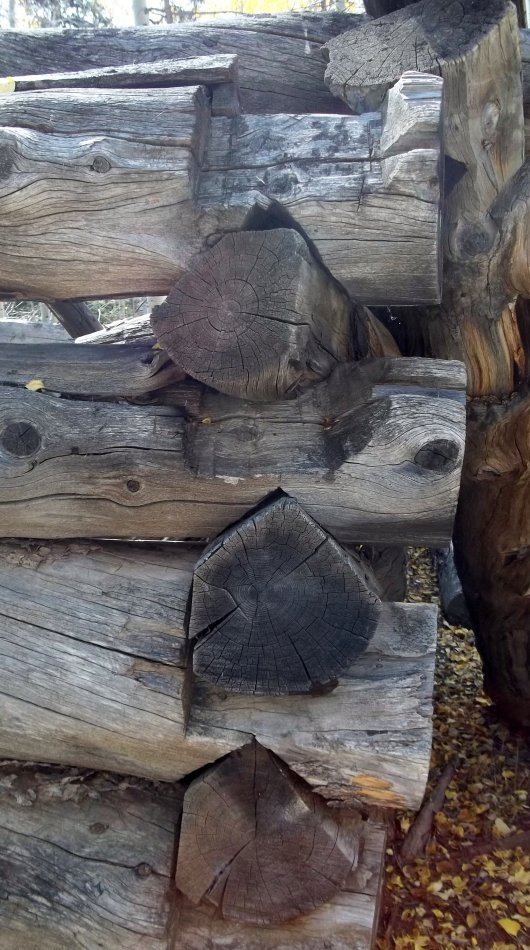 The other's we came to were large bunkhouse type, and were badly deteriorated. 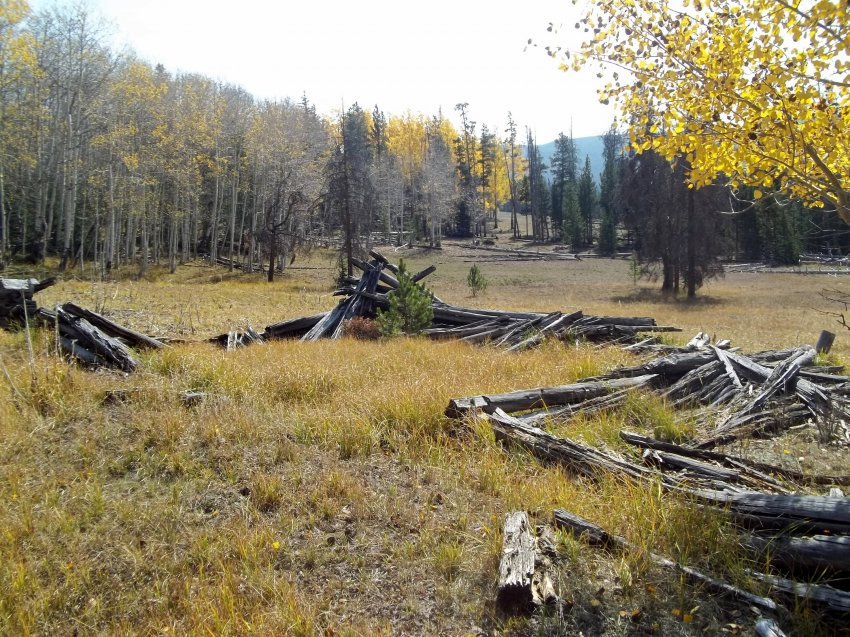 We spent a few minutes and headed back to the creek to check out another meadow and what looked to be the outline of a cabin. From the creek crossing we headed SouthWest to a small meadow, what was there was not a cabin but the biggest log loading platform I've seen (including online pics), and a large area of crusty sawdust, indicating that there was a sawmill here once. 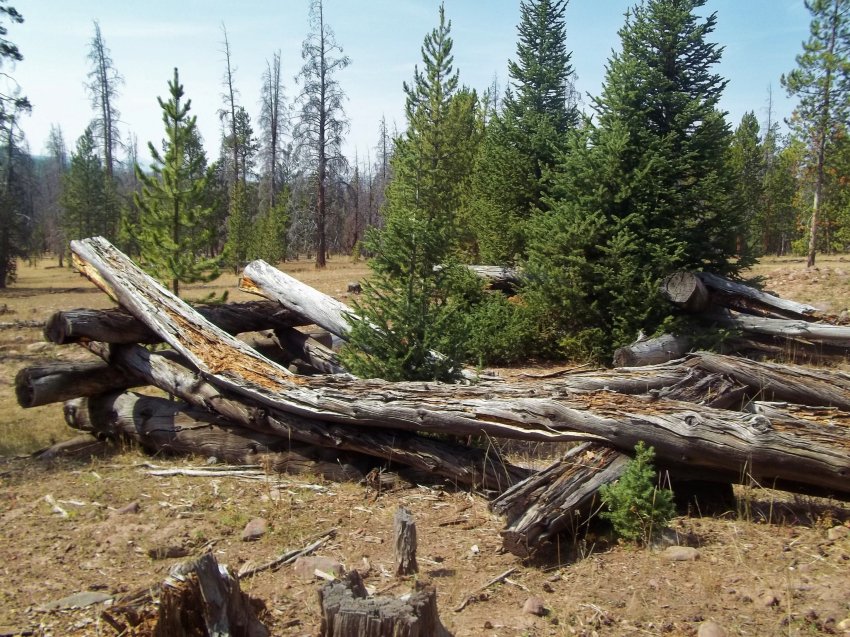 On our way back, about halfway back to the truck we turned East onto one last side road to check out the biggest looking sawmill site I've seen on google earth. This was the steepest part of the whole trip, but wasn't too bad.
Old Logging Road 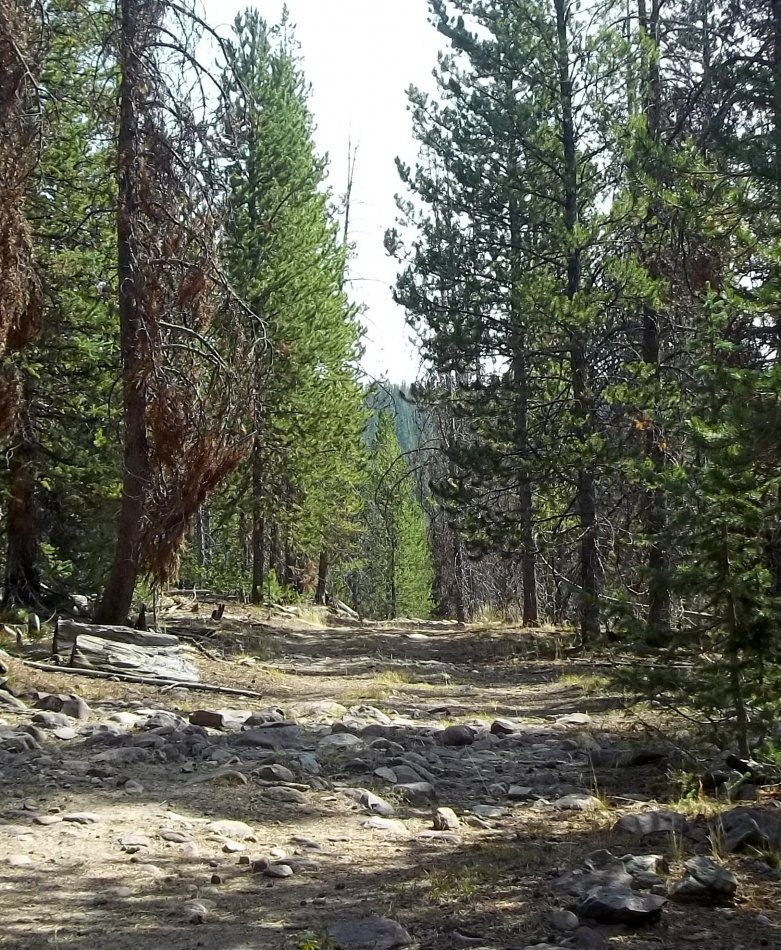 We found at the end of the road a very big sawmill site with large piles of scrap/slab, and a big area of crusty old sawdust and the second largest log loading platform I've seen. 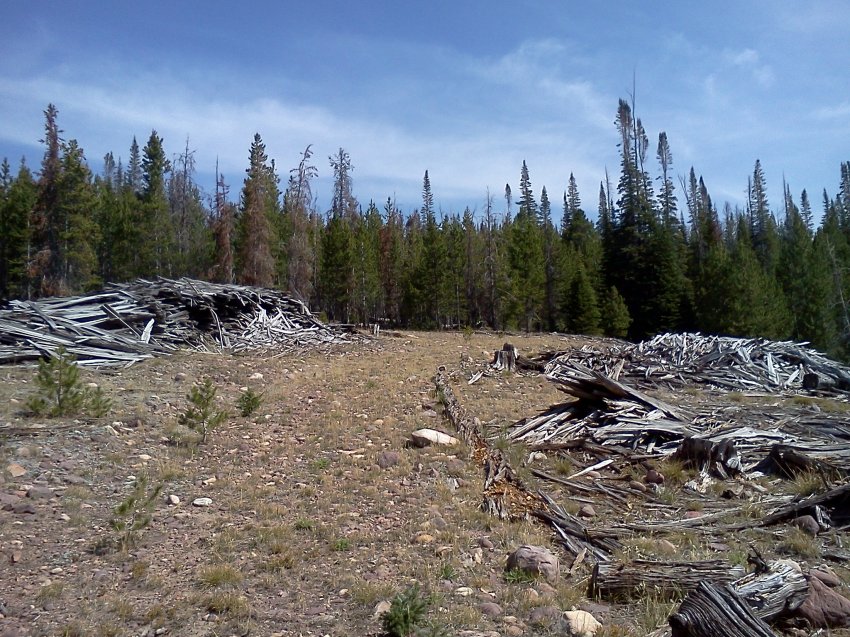 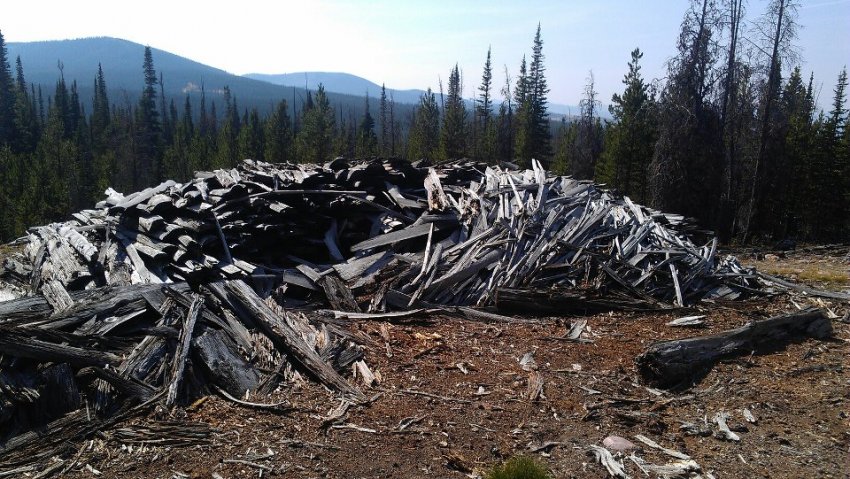 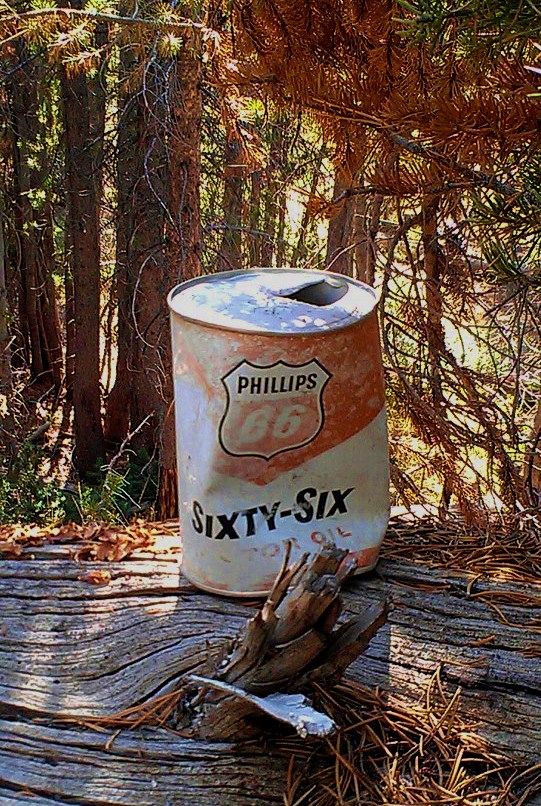 We explored for about another 15 minutes and headed back to the truck. We had hiked only about 3 miles total, and saw some really cool stuff along the way, definitely a great trip. Can't wait for summer!

It's nice reading your descriptions of what the stuff is. I have a tendency to see these things in the backcountry and just keep on walking without ever thinking of the story behind them.

And welcome to the forum!

Very cool. I'd heard about the tie hackers, also thanks to Cordell. He found this site when it was just my blog and sent me a message telling me all about it! Great to learn and see more, thanks for posting! And welcome to backcountrypost!
IG: @backcountrypost

Nice detective work. I heard quite a bit about these old loggers as a scout back in the day. I vividly remember seeing the sawmill remains near Sawmill Lake in the Henrys Fork basin as a teen and being impressed at the pluck of those guys. Now I'm kind of miffed that most all of the old growth forest is gone and we're left with beetle-kill tinder in the form of so many dead lodgepole pines.
You must log in or register to reply here.
Similar threads