Neff's Canyon - From Gray to Golden

“Why is it always gray and windy on Wednesday for these hikes?” I complained.
“At least you will be up in the mountains. It beats down here,” my coworker replied.
She was right.

This Wednesday edition of the coworker, after work hike, the plan was to climb Neff’s Canyon. It ended up just being my good friend and I, the others buggered out. Wooses.
Arriving to the TH around 445pm, we saw one couple with a couple of dogs, coming down the trail, the only people we would see on the trail.

It was gray, almost shadowless, but still the beautiful north face of Olympus greeted us. 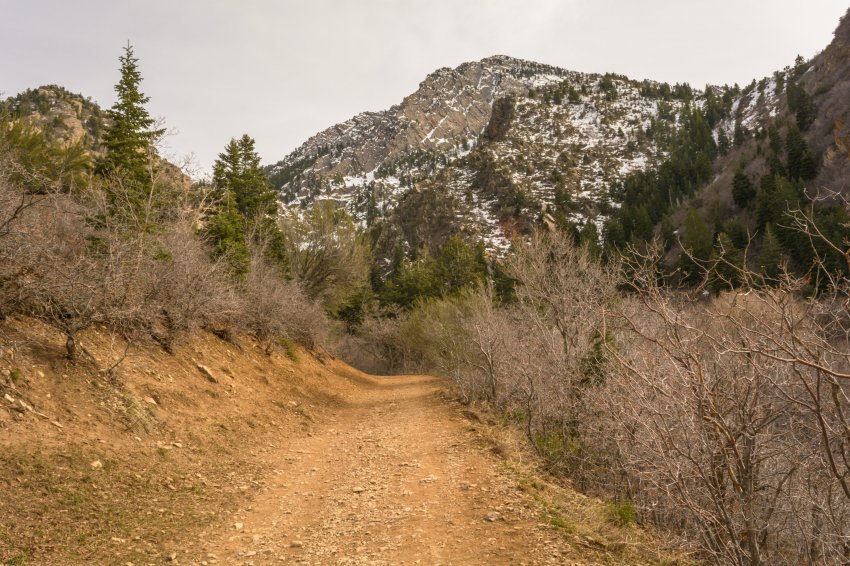 We climbed and pushed on, eventually in the snow, but never with snowshoes. Which was good, we had left them in the car. Just spikes.
The higher we went the more the clouds broke up.
Snow was rubbed on bald, or balding, heads and bare hands to cool us down. Nice workout.

Aspens, snow, peaks were golden as we entered the meadow and bowl. The snow consolidated enough to bear weight, dotted not by any fresh human tracks, instead there were trails of rabbits and bobcats. Fitting with the junction to Wildcat Ridge just up ahead. 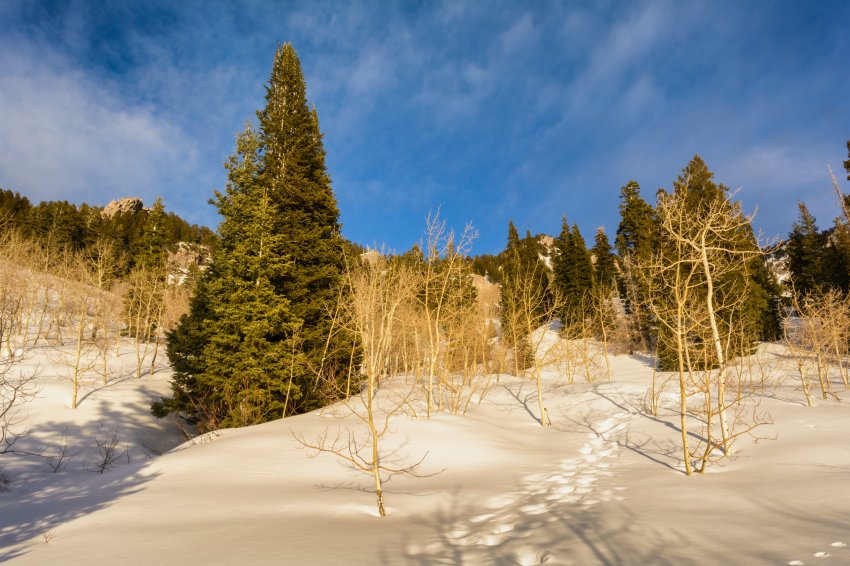 For me though, the scraping of my cartilage and scar tissue at physical therapy that morning, work, and then the climb, had me puckered out and in pain. My trail ended after climbing out of the initial meadow.
My friend continued on, while I wandered and then settled back down with a view of the sunset.

The gray had certainly melted away, and the golden, then violet light and alpenglo were fantastic. 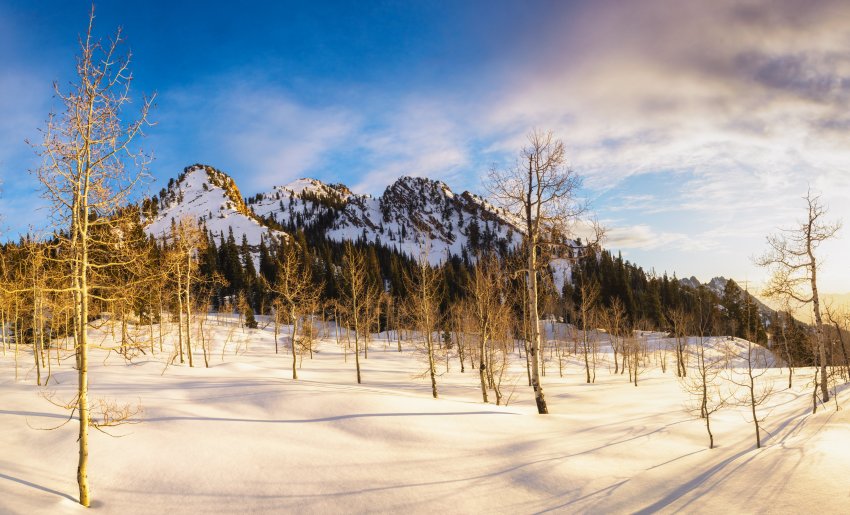 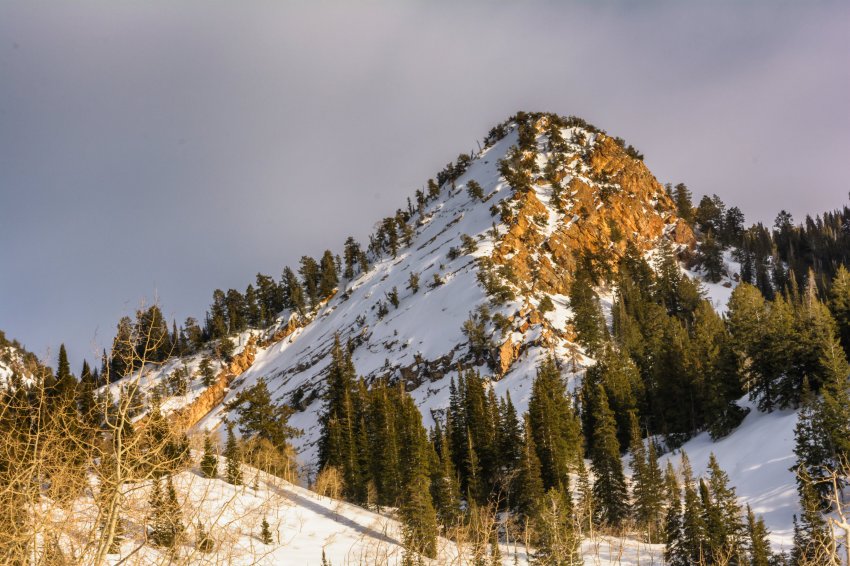 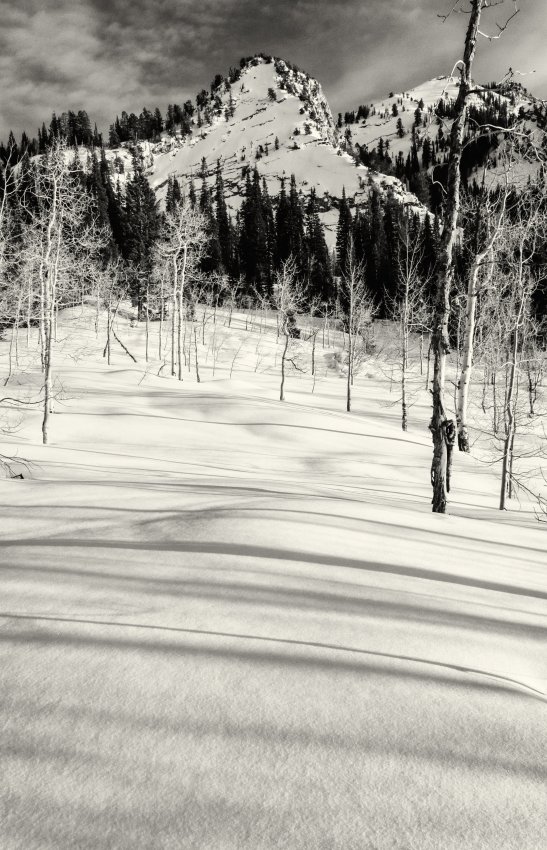 So much untouched springtime snow. 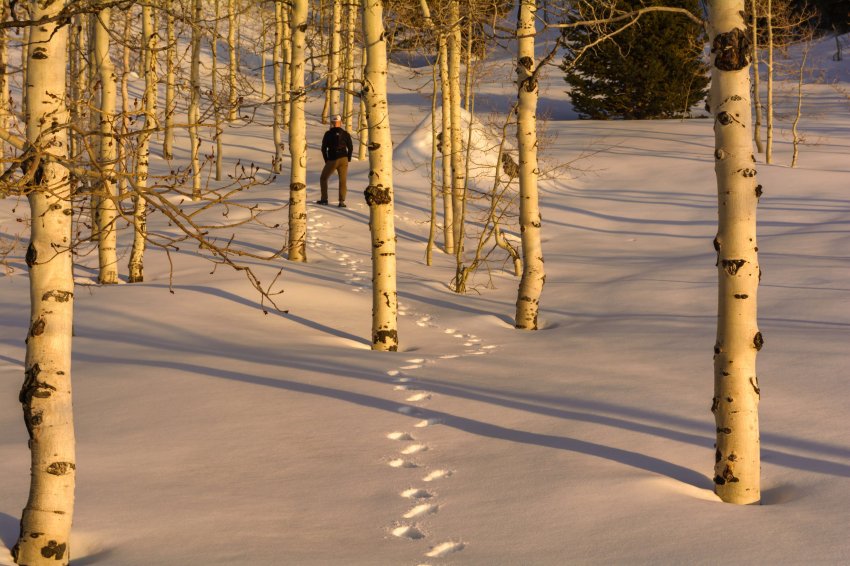 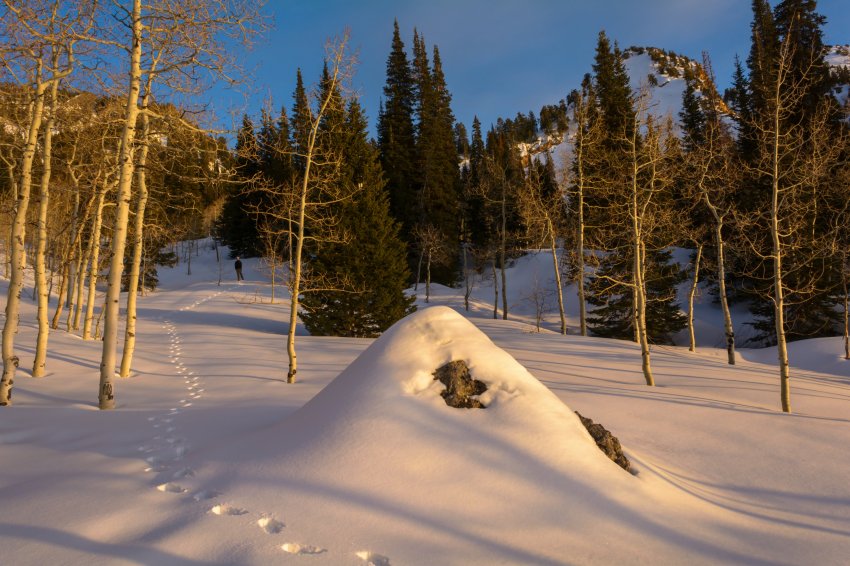 well.. it had been untouched. 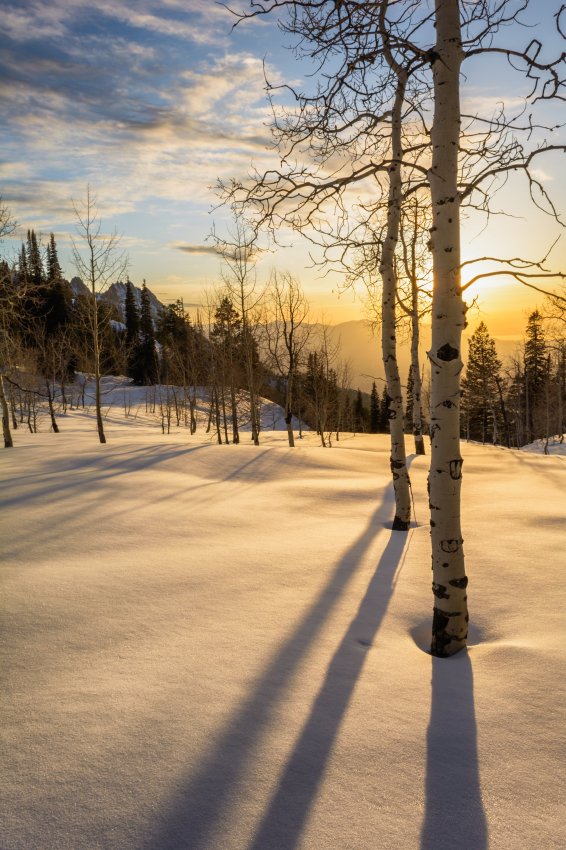 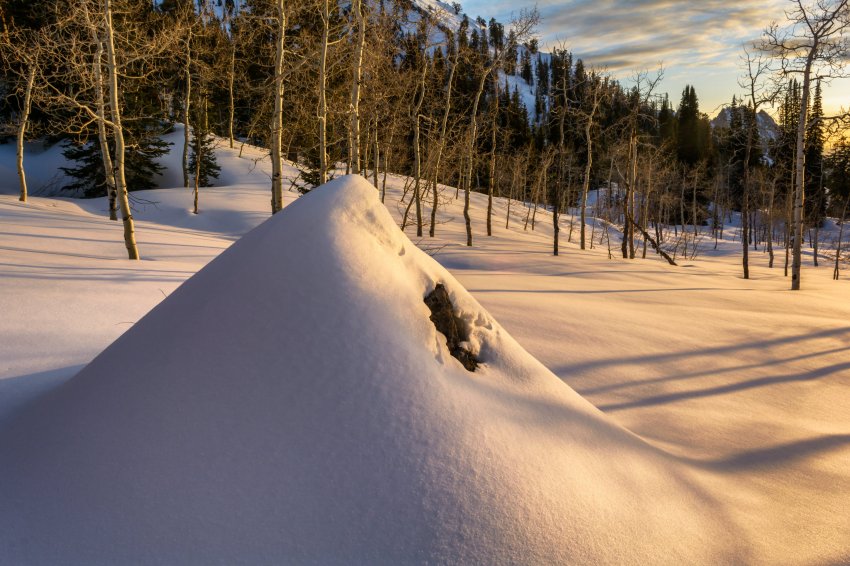 I climbed a little off the main trail, kicked out a small seat, dropped down on a stadium chair and just smiled.
In front of me the sun sank between the point and Stansbury mountains. 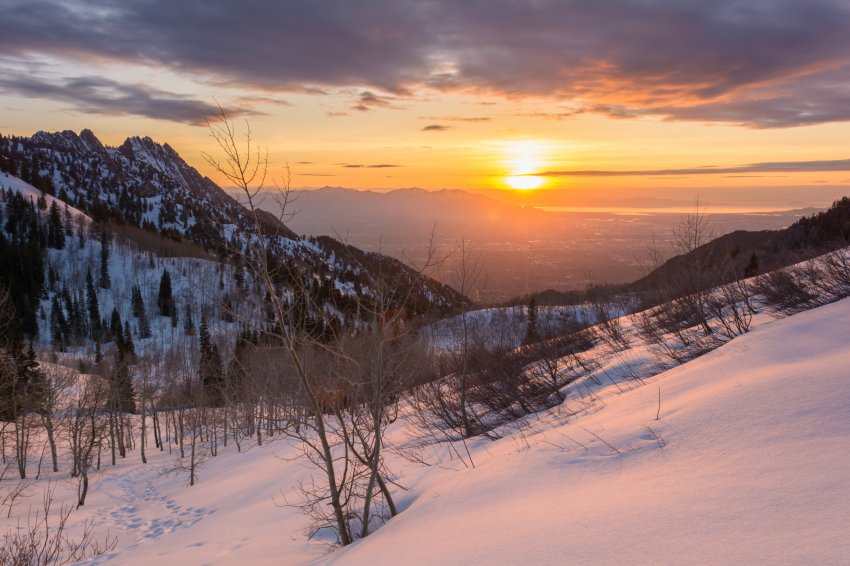 To the side of me. 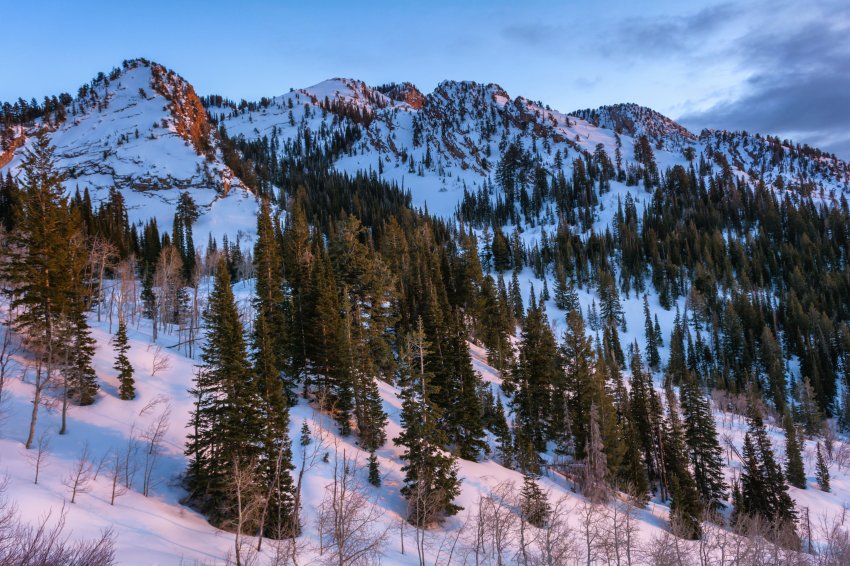 Eventually, as the lights in the city were winking on and the alpenglo fading away, my friend rejoined me and reluctantly we started the path down. 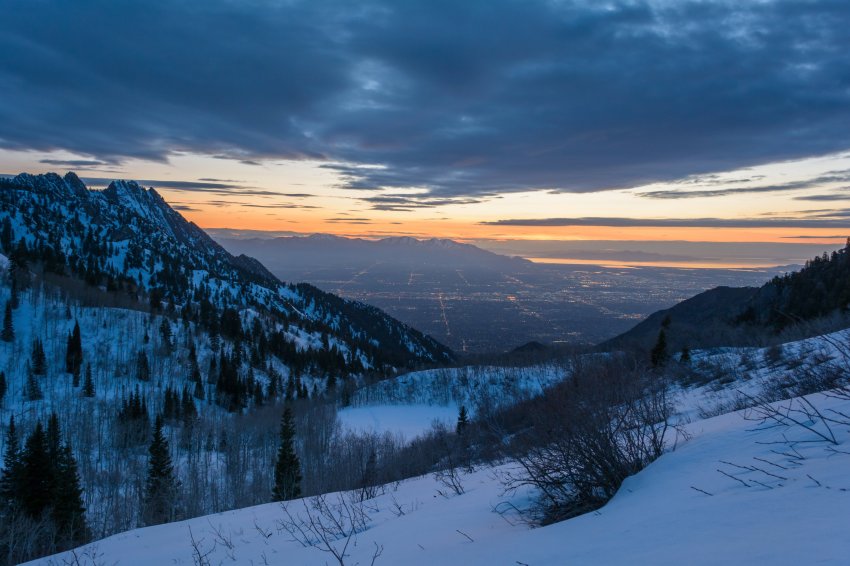 I admit, there were some places on the way down that became a butt slide, the ice was a bit to much for me to try and pick my way down, even with spikes.

Our only companions were Orion and Ursa Major overhead, the ever descending snowy trail, and occasional city lights below.
Or so we thought…

When I first saw them, I thought they had to be dog prints from the couple who we had seen on the way up. Then I saw prints on top of some snow that I had sluffed onto the trail when cutting a corner on the way up. Then on top of my own uphill tracks when I had walked the edge of the trail.
These were heading downhill.

A closer look confirmed it and I smiled.
We followed the cat prints for a good half mile or so, fresh and very distinct at times off to the side, and all downhill.
We hit a certain narrow spot in the canyon when something took off into the trees with a woosh and one single cracked branch.
A few deep breaths and laughter and once again we walked down the mountain by headlamp. Alone.


The climb up Neff’s was about 3k feet in just over 3 miles to where my friend stopped. I was a couple hundred feet of elevation lower and a half mile less distance. Still, about 6 miles was plenty good for a midweek adventure.

The weather was fantastic, the temperature could not have been better, with barely a breeze. To sit in quiet contemplation, alone, for a half hour watching the sunset was magic. 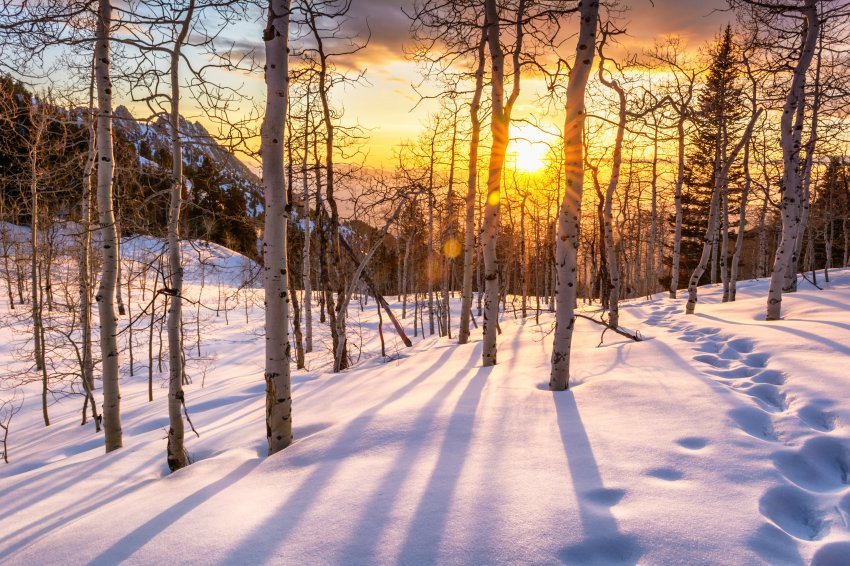 The beauty has me considering either a spring or autumn frolic up into the meadow, a quick overnight under the whispering aspens, then up the ridge and eventually down Mill B North into BCC.

Has anyone done that route here and is it worth it?
I've done a lot of Mill B north several times, but never quite to the junction that would meet this trail. It should be mostly downhill from there and into BCC.

nice photos, again. looks like you're doing alright out there.
i love this site

I love Neff's. Thanks for writing this up.

I spent a night in that meadow just above the aspen's, I was awoke by a few different people. It was alright, but a short drive to the Uinta's will always be favorable to me.

slc_dan said:
I love Neff's. Thanks for writing this up.

I spent a night in that meadow just above the aspen's, I was awoke by a few different people. It was alright, but a short drive to the Uinta's will always be favorable to me.
Click to expand...

I used to often hike Neff's in early morning and would agree that there are always a few people up there, even early, in summer. But you could probably escape them by camping at the pass overlooking BCC.

regehr said:
I haven't done Neff's to Mill B North either, but Neff's to Thayne's makes a great point-to-point hike.
Mill B North to Porter Pass to Raymond, then back via the Mill A Basin trail is another great one, if you haven't done it.
Click to expand...

Thanks @regehr , I figured someone had some ideas. I do need to go up Raymond sometime. I'll check it out.


slc_dan said:
I love Neff's. Thanks for writing this up.

I spent a night in that meadow just above the aspen's, I was awoke by a few different people. It was alright, but a short drive to the Uinta's will always be favorable to me.
Click to expand...

Also good to know, and thanks!
I love the uintas. The one advantage of these local hikes are that in the time it would take to get to the Uintas I can be most of the way up the trail... plus there's a strange feeling to being up high and seeing all the madness of city lights below.

Yes they did. Thank you