I called the BLM office in Kanab and asked them what the shutdown will do. I wss tokd their offices will be closed and no one would be working.
Does anyone know if they will be doing safety/security patrols or all they all sitting at home?

In past shutdowns they still do patrols, possibly even more so in cases where people think the shutdown might mean they could go places they might not normally be able to, like The Wave.

A couple of long-distances hikers thought they could get away with that crap a couple years ago and ended up getting hefty tickets on the White Rim trail in Canyonlands.

Basically - you can't get a permit during the shutdown and they'll still bust you if you poach it. It's a lose-lose.
K

In many of the parks and forests and such, it will be the offices that will be shut down. In those areas usually the law enforcement personnel stay on as essential personnel during a shutdown. They are saying that this shutdown could be lasting awhile unfortunately. It is as Larryboy said above that one can't get a permit, but if you poach it and are busted ... watch out for those law enforcement personnel are still there watching over everything.

In a local paper here in Jackson Hole was saying on the shutdown and the personnel for the National Elk Refuge. In a previous shutdown, the Elk Refuge Manager and the Law Enforcement Officer stayed on while the others were furloughed.

Also take account of when this is happening with right at the Christmas and New Years holidays. It might be a few days till people notice on account many places are closed anyway for the holidays.
Last edited: Dec 22, 2018
' At The End Of The Road Where The Trails and Life Begins ' - Message on a sign near Cody, Wy.

many parks will stay open but on limited service.
Zion for example will be open even with visitor services due to State fundings but no permits will be honored or new permits granted.
So if you think you can just hike or stay in areas where you need a permit, the same rules and regulations are in effect as without a shutdown.
If you get caught you'll end up with a hefty fine.
Smaller parks and areas affected by the shutdown will be accessible but without any services like visitor services, bathrooms or trash removal.
http://yvonnebaurphoto.smugmug.com/

I remember in the last shutdown, Jim Stiles posted a photo of himself stretched out on the main road through Arches. He'd come in the back door (Klondike) and saw nary a soul. Even though it was on the front page of the CC Zephyr, he didn't get busted.

I think the parks are staying open (at least in Utah) but with no services, but the last time the main road into Arches was barricaded. I would love to visit a busy place like Zion when few people are there.

The previous shutdown was really hard on the park towns and they were getting ready to lay people off in Moab when it finally ended. But they still lost a lot of foreign tourists who were afraid to commit to an expensive trip in case it happened again.

Anyone know if Yellowstone will be closed? You can't drive the roads (except through Lamar), but they still allow snow tours and skiing/snowshoeing/snowmachines - wonder if that will continue.

OK, found this, looks like things will continue for the tours etc.:

https://kbzk.com/news/outdoors/2018/12/22/yellowstone-national-park-enacts-shutdown-plan/
I do too, Ben. 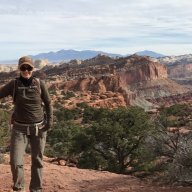 Don't know about Kanab, but there's some more general info in this Trib article. Also on the Utah .com site. Zion, Arches, and Bryce are being kept more open due to money donated from the state. The main road into Arches will be open. Sounds like Yellowstone will stay open too. The Scenic Drive in Capitol Reef is closed.

Supposed to be snow in parts of southern Utah right over Christmas, too. Hope people stay safe since a lot of the roads probably won't be plowed.
____________
100 Classic Hikes Utah
K

Read in some article earlier today as concerning this shutdown that they would try to keep the parks open this time but they did not elaborate.
See What Happens. Wishing Everyone the Best!
' At The End Of The Road Where The Trails and Life Begins ' - Message on a sign near Cody, Wy.

We were in Saguaro NP (west) in Tucson today. The Visitor center and visitor center toilets were closed, but the scenic drive, which you have to enter to get to the Hugh Norris TH was open. I have no idea if they close and open that loop drive at dawn and dusk as normal, or they leave it open.

All I can say is from my experience in the last shutdown. I had plans for a Yellowstone trip. No one was allowed in the park. They even shut down the road to Cooke City (except for local residents), which I think was illegal but I figured arguing that would be fruitless. One ranger told us about a few groups they busted. We ran into 1 undercover ranger who was trying to determine what we were up to as we loaded our packs for a trek on National Forest lands, which was open. The west side road out of Gardiner was open but there was a sign saying that it was illegal to stop and look at wildlife in the park. What a ridiculous notion.

The funny thing was that with all the rangers running around making sure no one illegally entered the park, the rangers were staffed as usual for early October and probably working overtime. I wanted nothing more than to sneak into the park for a night or 2 but my 2 comrades had no interest, so all I did was walk into the park about 100 yards in a spot where our trail abutted the park. Eff congress.

And yes, as previously mentioned the gateway towns were really hurt by the shutdown so hopefully this time the parks are kept open.

Carcass said:
I called the BLM office in Kanab and asked them what the shutdown will do. I wss tokd their offices will be closed and no one would be working.
Does anyone know if they will be doing safety/security patrols or all they all sitting at home?
Click to expand...

@Carcass - Two years ago we heard many stories from a local guy about very high fines, specifically in these situations. One guy was warned against going to the Wave, the rangers caught him and he was fined $2,000.
Im wondering what they would fine that ‘naked hiker’ this weekend should he consider a trip without a permit to the Wave! After all we saw him getting ready just one trailhead away a few weeks ago.
I would any day go to that “other location” further away, which doesn’t require a permit- it’s so much better, there is so much more to see ! And you get to drive on all the sandy roads

@Outdoor_Fool you should've told them you were there on behalf of Ted Cruz, checking the place out for privatization. (not funny, I know)
I do too, Ben.
C

I have no plans for poaching a hike without a permit! I was wondering if they would patrol for safety and prevent vandalism and such.
Im not risking a fine.

Carcass said:
I have no plans for poaching a hike without a permit! I was wondering if they would patrol for safety and prevent vandalism and such.
Im not risking a fine.
Click to expand...

they sure will because of people trying to go illegally without a permit.

In January, when we had the last shutdown, entire Hawai'i Volcanoes NP was closed. Luckily the lava was just a quarter of a mile before the park boundary so we did our tours.
But they had extra park personnel out because they knew people would illegally try to enter the park. Since the visitor center and everything else was closed they send the rangers out to different areas in the backcountry
http://yvonnebaurphoto.smugmug.com/

I forgot to mention that 1 ranger we talked to was almost apologetic that he had to keep the public out. I'm sure he was trying to stay professional, which he did, but it was obvious that he was appalled by the entire dilemma.
I

Rocky Mountain National Park has visitors centers closed. They said roads would be open, weather permitting, but then closed them on a sunny day. It looks like if you want to visit the park, you're hiking or snowshoeing in.

UT national parks are apparently open; UT state gov is ponying up the money to keep them running.

LarryBoy said:
UT national parks are apparently open; UT state gov is ponying up the money to keep them running.
Click to expand...

I heard that only the 3 busiest of them are funded (Zion, Bryce and Arches)...at least that's what I heard in Moab this past weekend...
Randy Langstraat | ADVENTR.co

Such a shame! I was in zion in 2013 when the shutdown occurred. Being from the east coast and having planned that trip months in advance, I feel peoples pain now. Ended up exploring snow canyon, kodachrome, and coral sand dunes state parks. All nice parks in their own. The state of Utah stepped in at the end of our stay and I was able to get a few days of hiking in zion. Utah never got repaid by the feds so I'm not sure how long the state will pay this time before they pull the plug

IntrepidXJ said:
I heard that only the 3 busiest of them are funded (Zion, Bryce and Arches)...at least that's what I heard in Moab this past weekend...
Click to expand...

Looks like I heard right: https://www.sltrib.com/news/2018/12/22/utah-will-pay-keep-three/
Randy Langstraat | ADVENTR.co
You must log in or register to reply here.
Similar threads