A few weeks back I had made a resolution to try out cross country skiing. I signed up for some beginner classic lessons at the North Fork Park Nordic Ski area located on the back side of the northern Wasatch mountains. I had a goal in mind. I have done a bit of snowshoeing and was thinking perhaps skis would be a more efficient way to travel on snow. If I liked skiing then I would like to try some back country exploration. I thought a good first time out would be to hit the groomed trails at the Lily Lake Ski area on the North Slope of the Uinta Mountains. In addition to the groomed trails there are half a dozen yurts in the area available for rent. This seemed like a good option since I have yet to gear up for winter tent sleeping.

I completed my two ski lessons and with some free time to explore around North Fork Park I decided I liked this and wanted to expand my range. My initial times out were on rental skis, which I thought would be sufficient but my enthusiasm got the best of me and I ended up purchasing skis, poles and boots to have ready to go at a moment's notice. I decided I would break them in with a quick afternoon trip to the Lily Lake ski area. Turns out I got broken in as well with a big whiteout hitting me on my way out that day. Turned out to be a fun time experiencing the variable weather that day. My confidence was boosted.

At this point I felt I wanted to take the next step and reserved one night in the Ridge Yurt. Turns out I was lucky to get the reservation as they book up quickly. Its likely I only got the reservation due to it being Superbowl Sunday.

Next up was to put together a pulk in which to pull my gear so I didn't have to shoulder it in a back pack. Following some instructions on the REI blog site DIY: Make Your Own Pulk Sled I managed to round up everything and set to building it out.

Feb 2nd arrived and I packed my gear and headed for the trailhead. The day was very warm with a beautiful sky but the weather forecast was for a major winter storm and plummeting temperatures the following day. I was a bit nervous but felt I had to give it a go. The view from the trailhead was stellar... 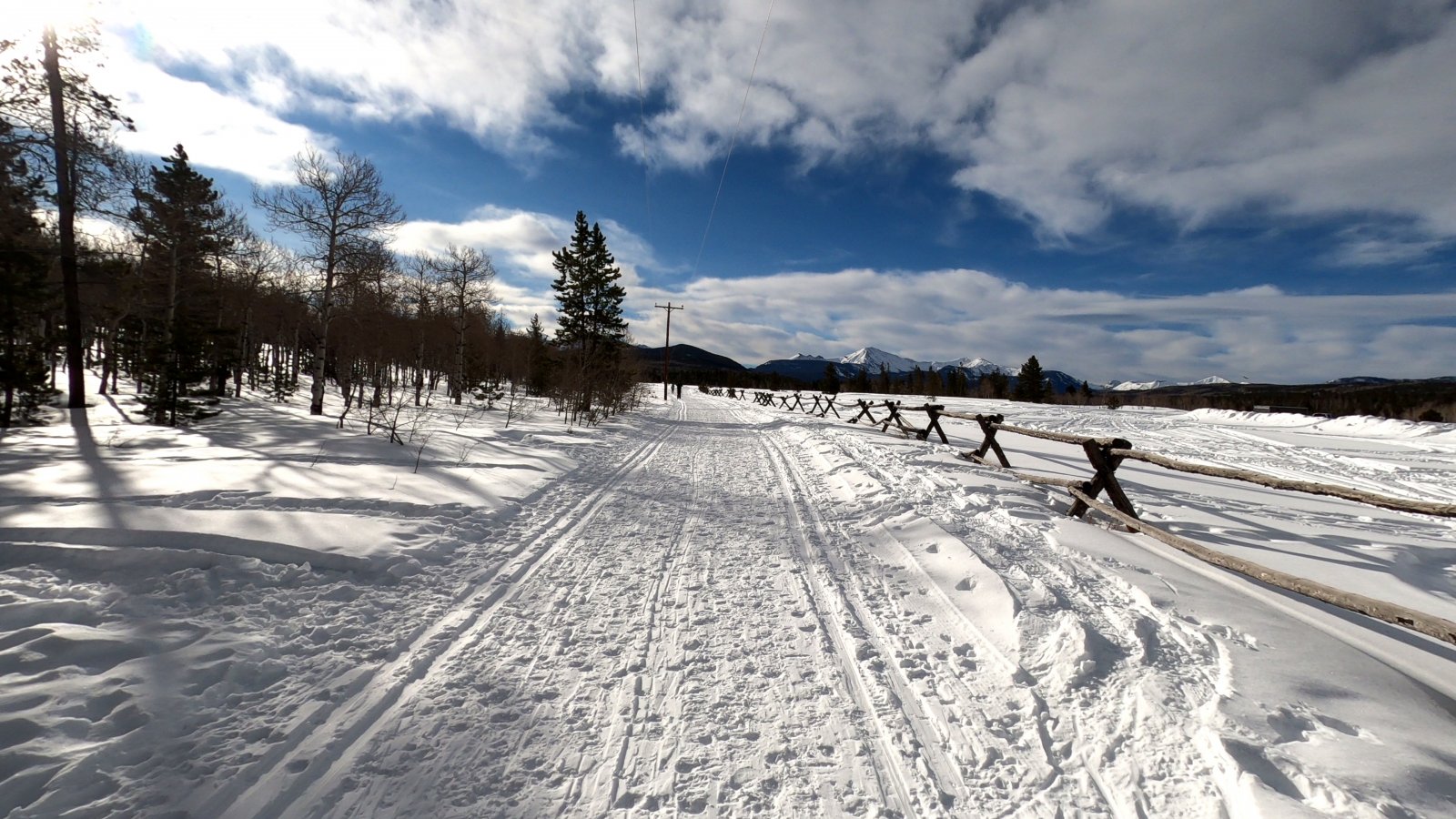 Here's a short video of the trip if you would like:


The trail system has routes for both snow machines and ski/snowshoe/hiking travel. The non-motorized section starts right off from the trailhead. I quickly arrived at my first challenge: A steep drop down to a stream crossing and back up the other side. I would end up walking this part as I knew I would not be able to brake down the steep hill, especially with not knowing how much the pulk would be pushing me down. 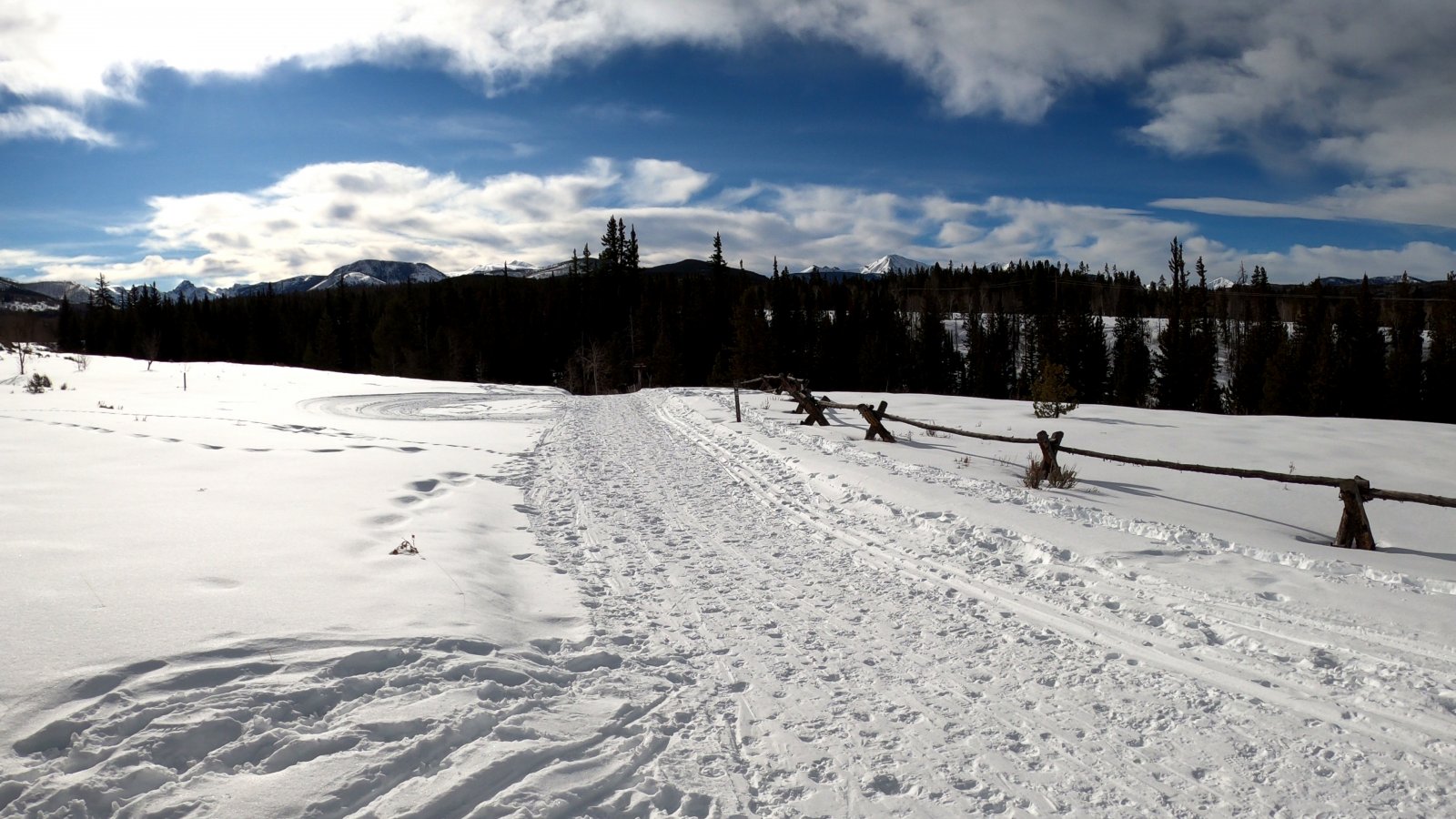 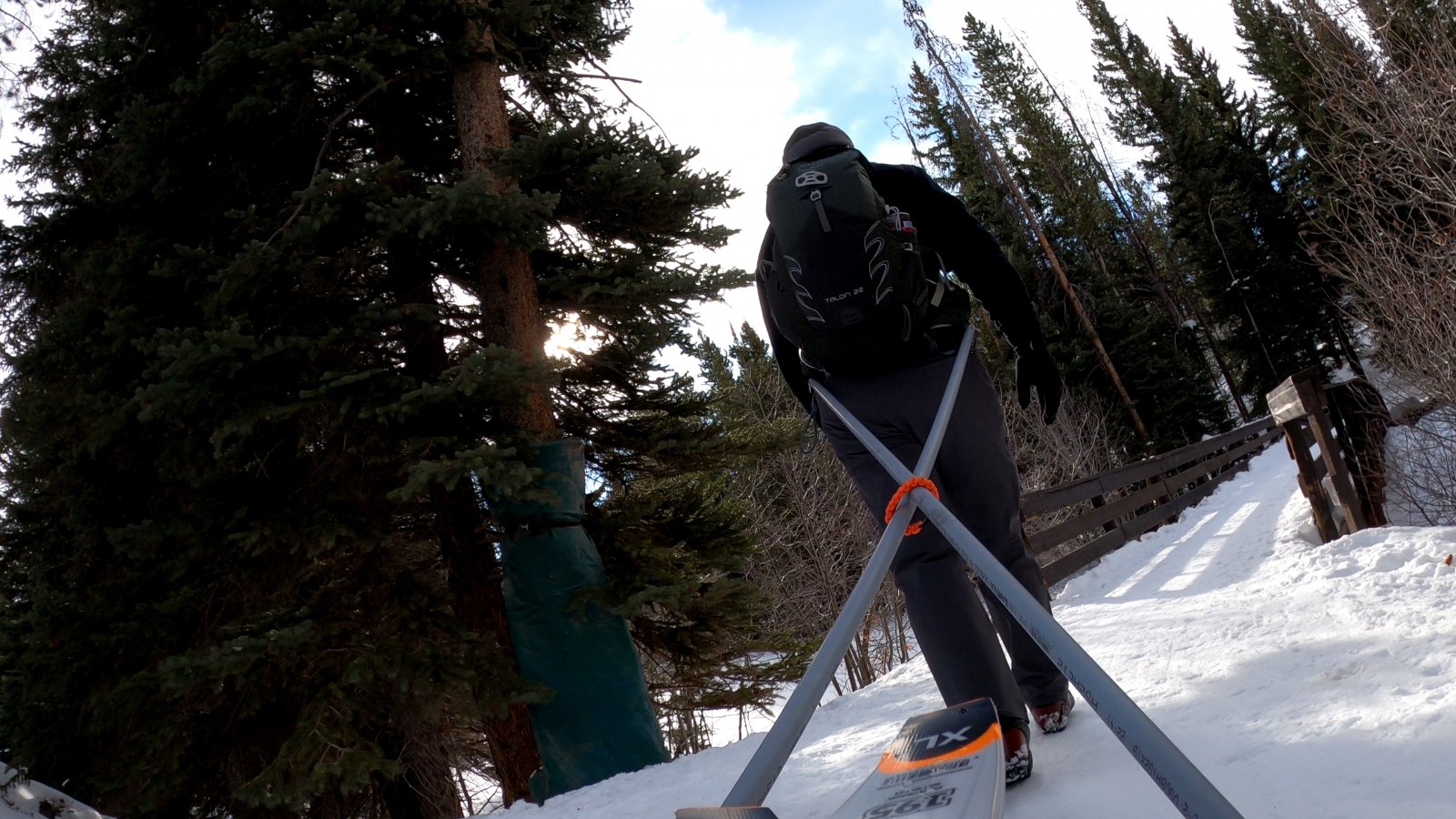 Once on the other side the skis went back on and I continued up the Sage Draw trail. The views were amazing. 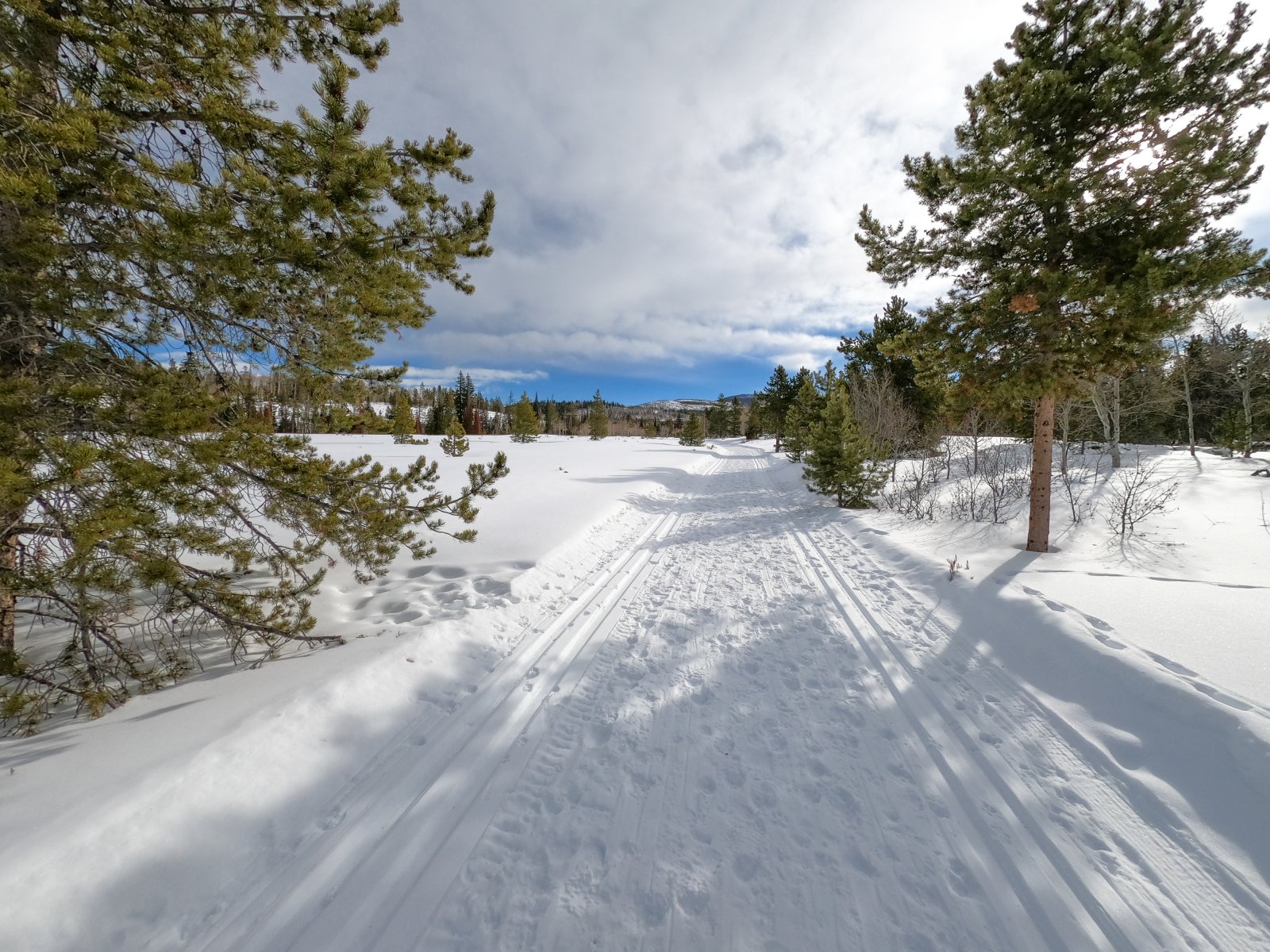 I would pass through several junctions with other trails but would be staying on the Sage Draw trail for the first couple of miles. The trail climbs gently to the southeast then turns to the south. I soon discovered the condition of the snow had changed and my skis were sticking badly. After putting up with this as long as I could I finally relented and strapped the skis to the pulk and continued on foot for another 3/4 or so of a mile. Luckily the snow was packed down and made for easy walking. 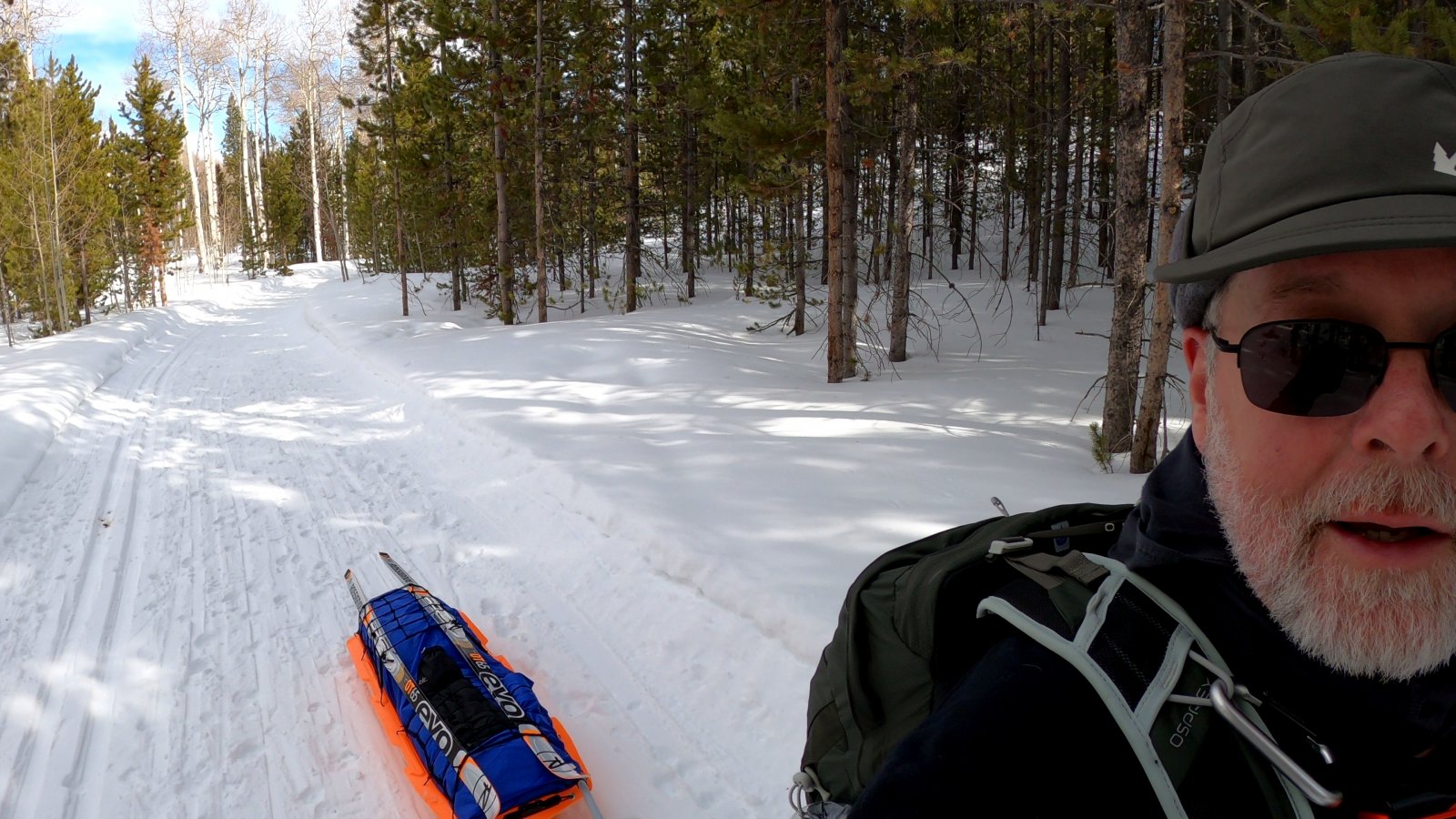 Coming out of the top of Sage Draw the trail ends at the Wolverine ATV trail. Snow machines are allowed on this trail so the travel would be somewhat less consistent all the way to Lily Lake. The trail climbs moderately to a pass then drops down into the Lily Lake area. Since it was downhill at this point I decided to try the skis once again. I did better through this stretch but sections were still pretty sticky. I ended up pushing through and would ski from here until the final push to the ridge.

I reached the junction with the Ridge Trail which would be my final push to the ridge above. 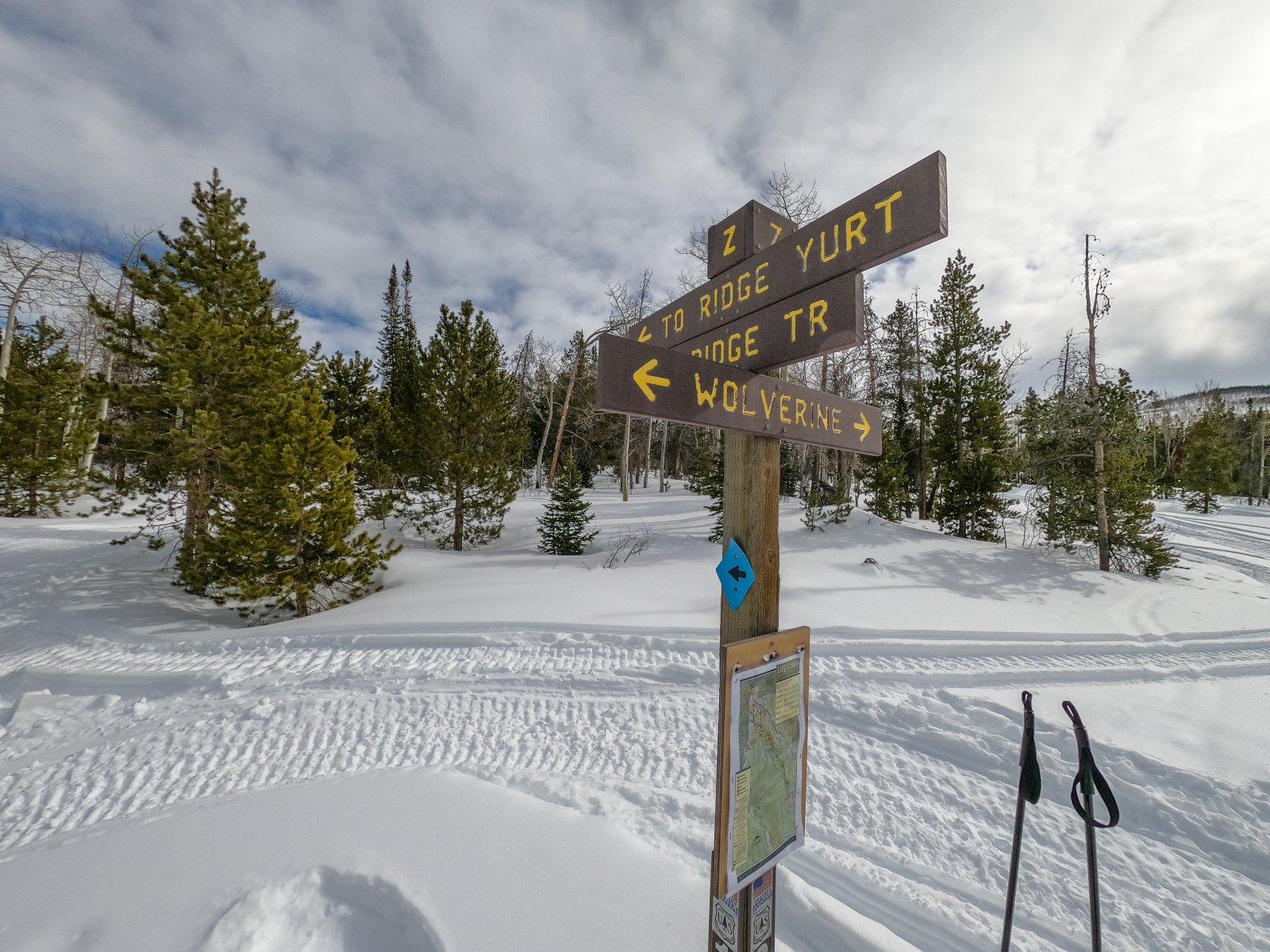 The Ridge Trail heads east in a moderate climb toward the ridge. The last push was quite steep and I would once again have to walk up. 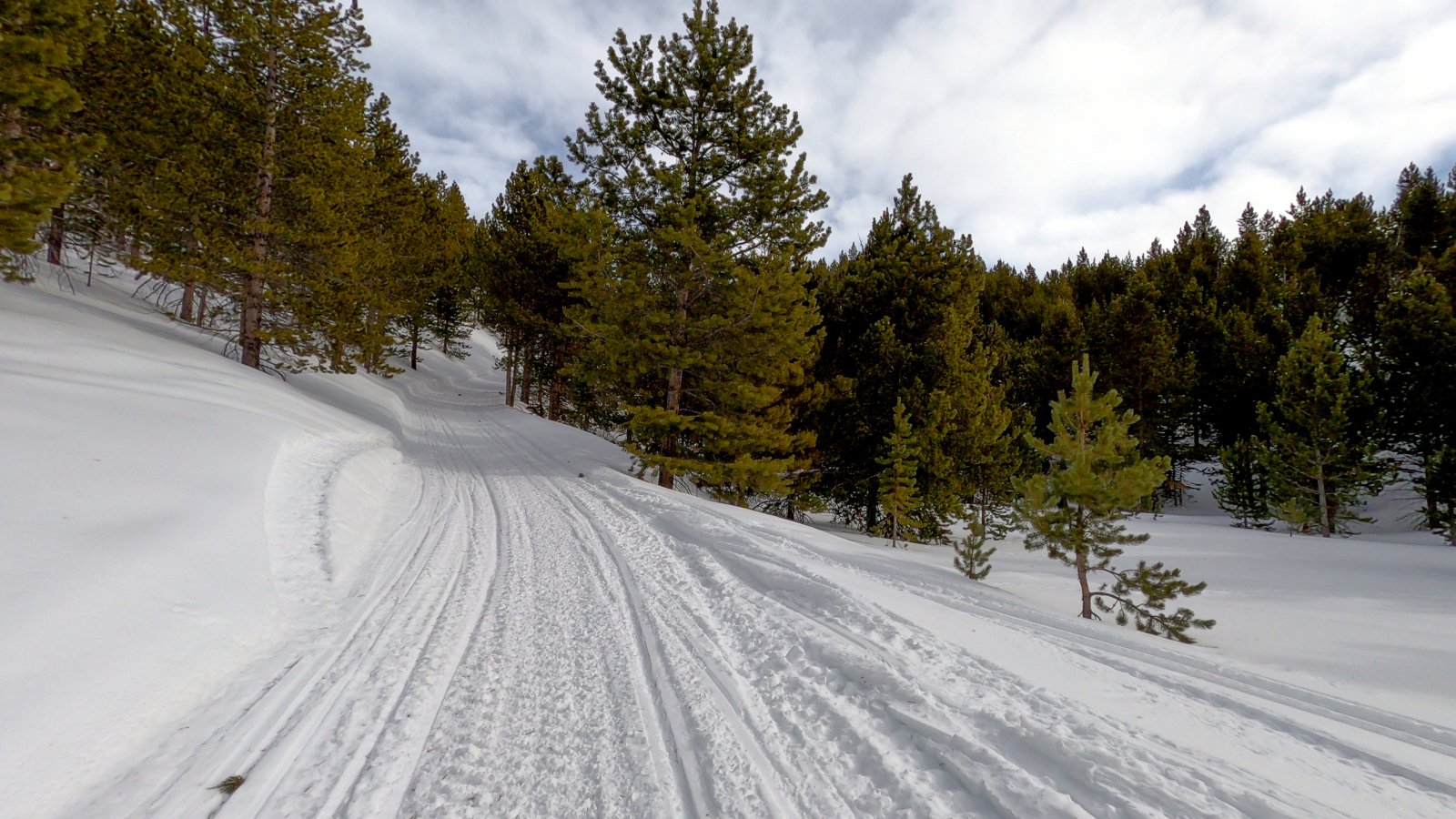 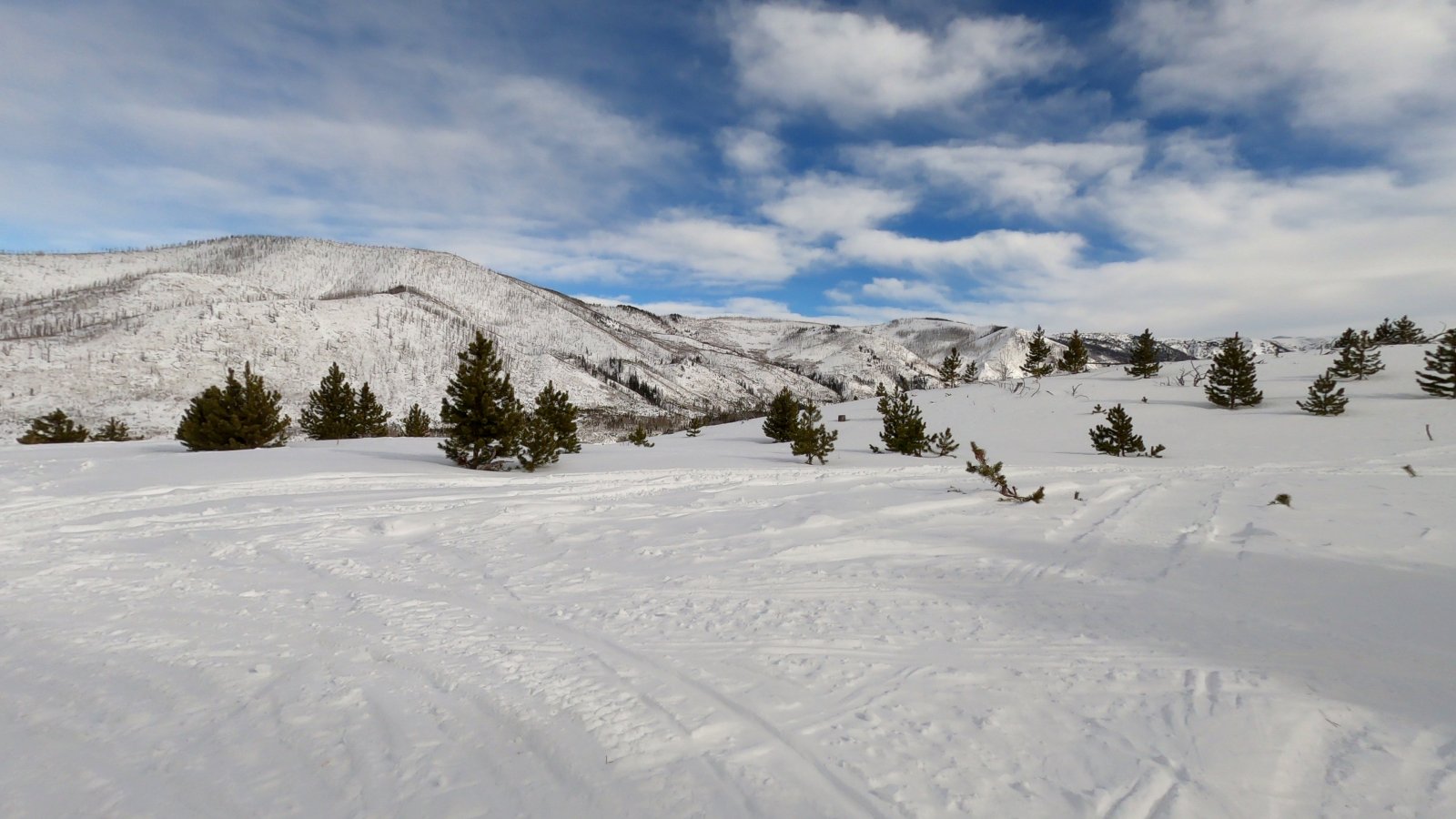 Just a few hundred yards north and down into a sheltered bowl I found the Ridge Yurt, my home for the night. 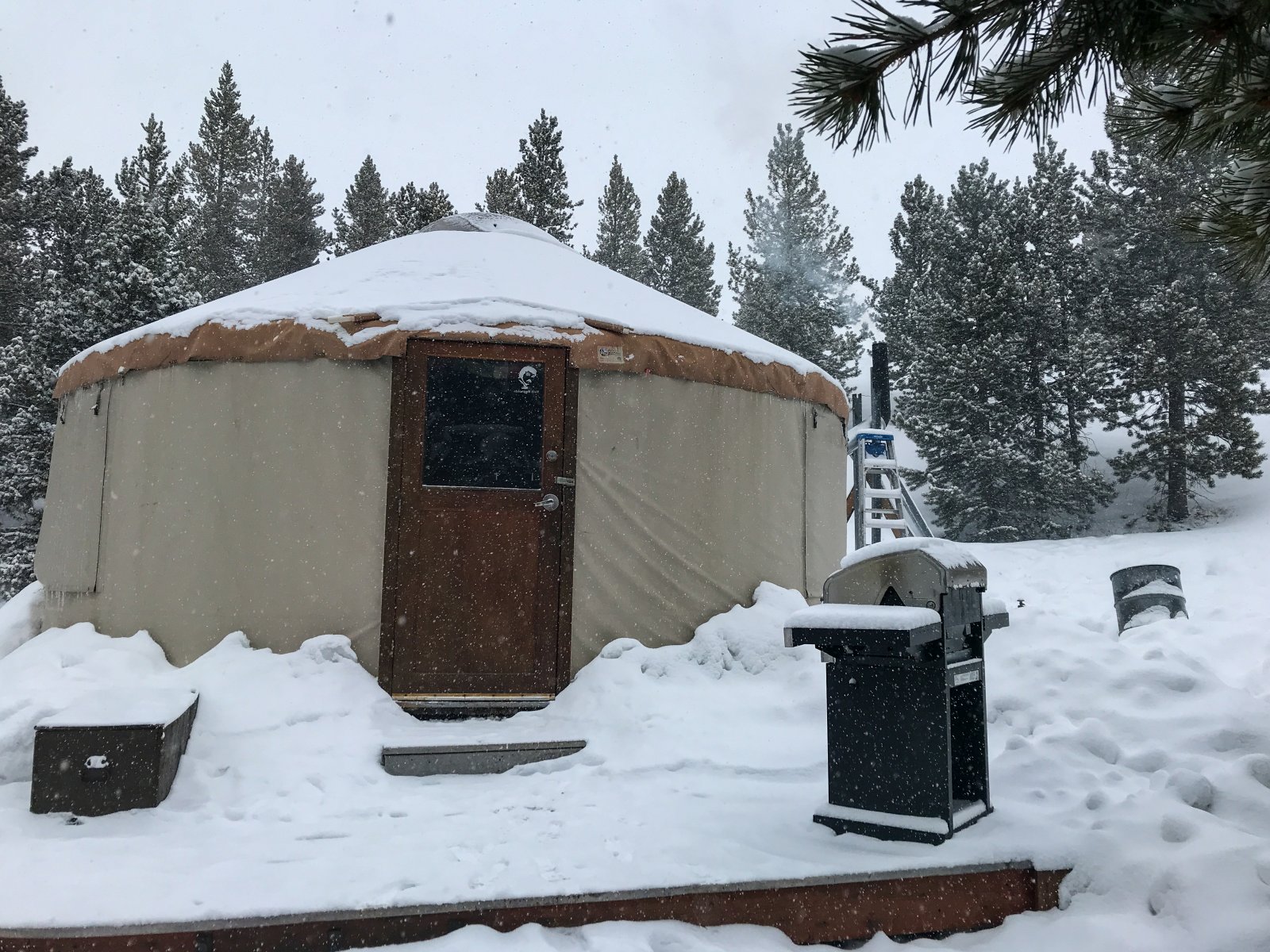 These yurts are pretty well equipped with a wood burning stove, propane lantern and stove and sleeping accommodations for 6-12 depending on how cozy you want to be. 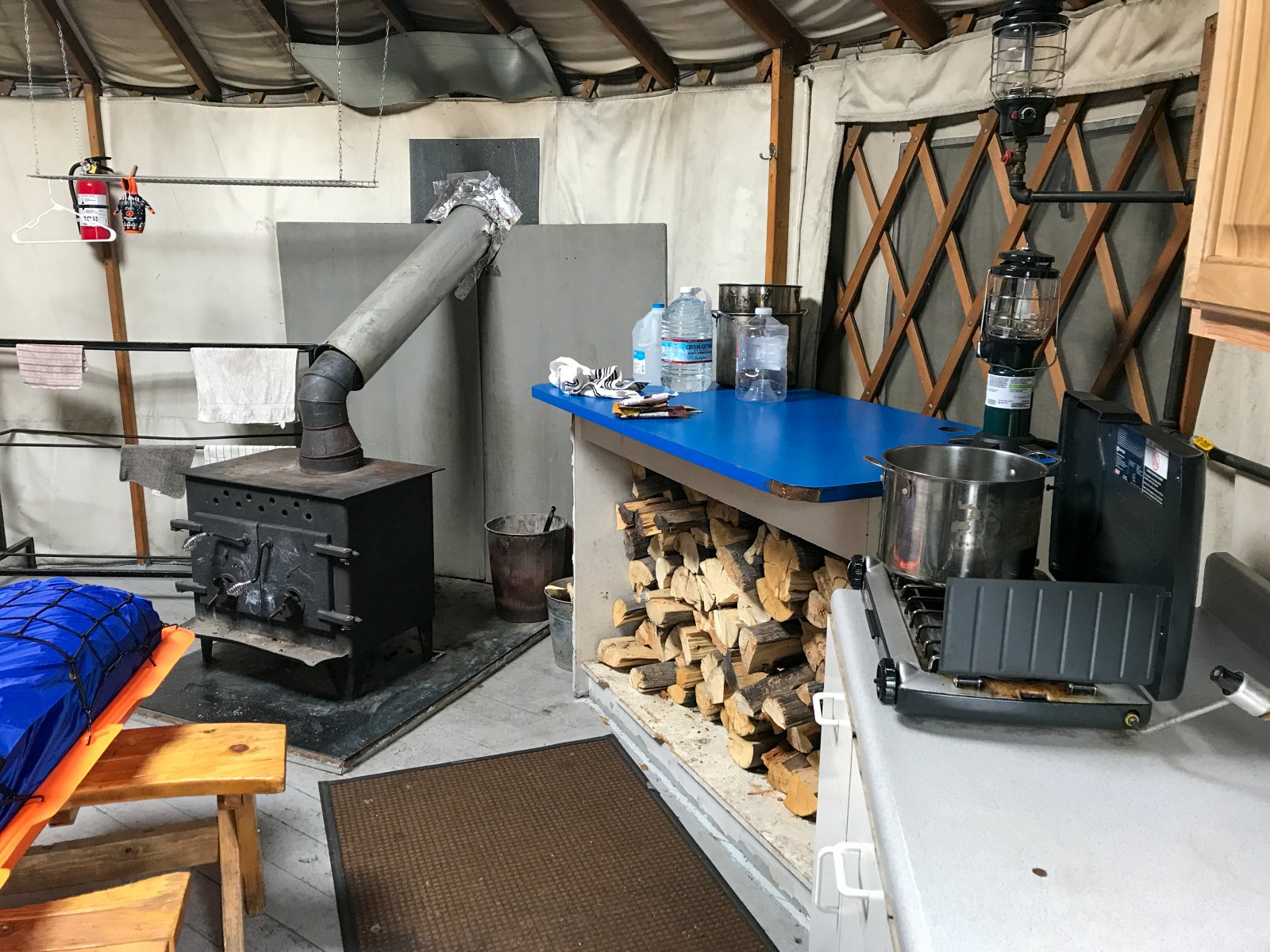 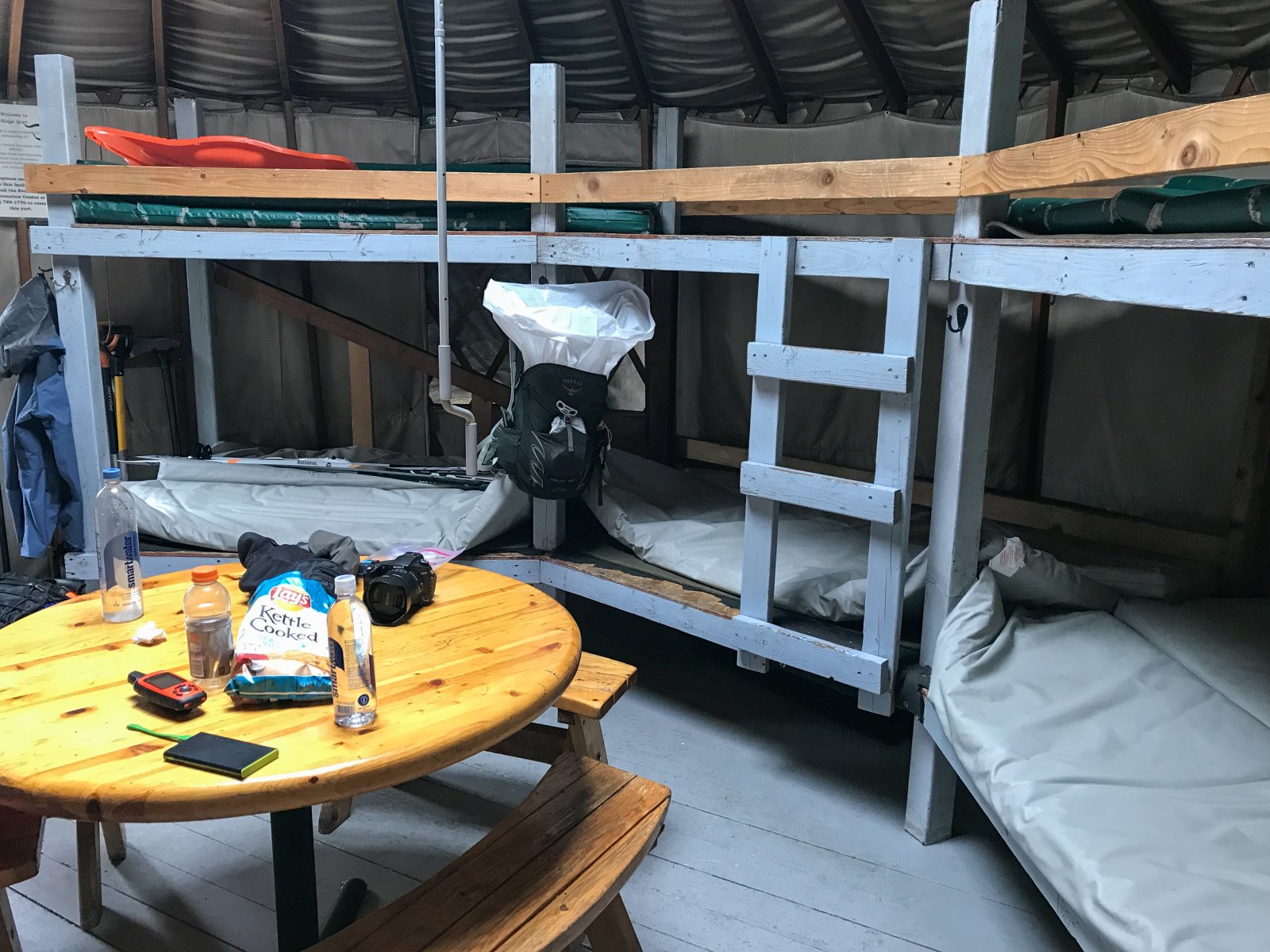 Once I got the stove going it was pretty comfy all night with only a couple of stoking with wood needed.

I was pretty tired at this point so I decided to take a little nap. I slept for about two hours and felt much refreshed after. I had brought my snowshoes so I strapped them on and donned my gaiters and when out at dusk to explore a bit along the ridge line. Wind had come up and temperatures were dropping a bit so I only stayed out a short time but the views were great. 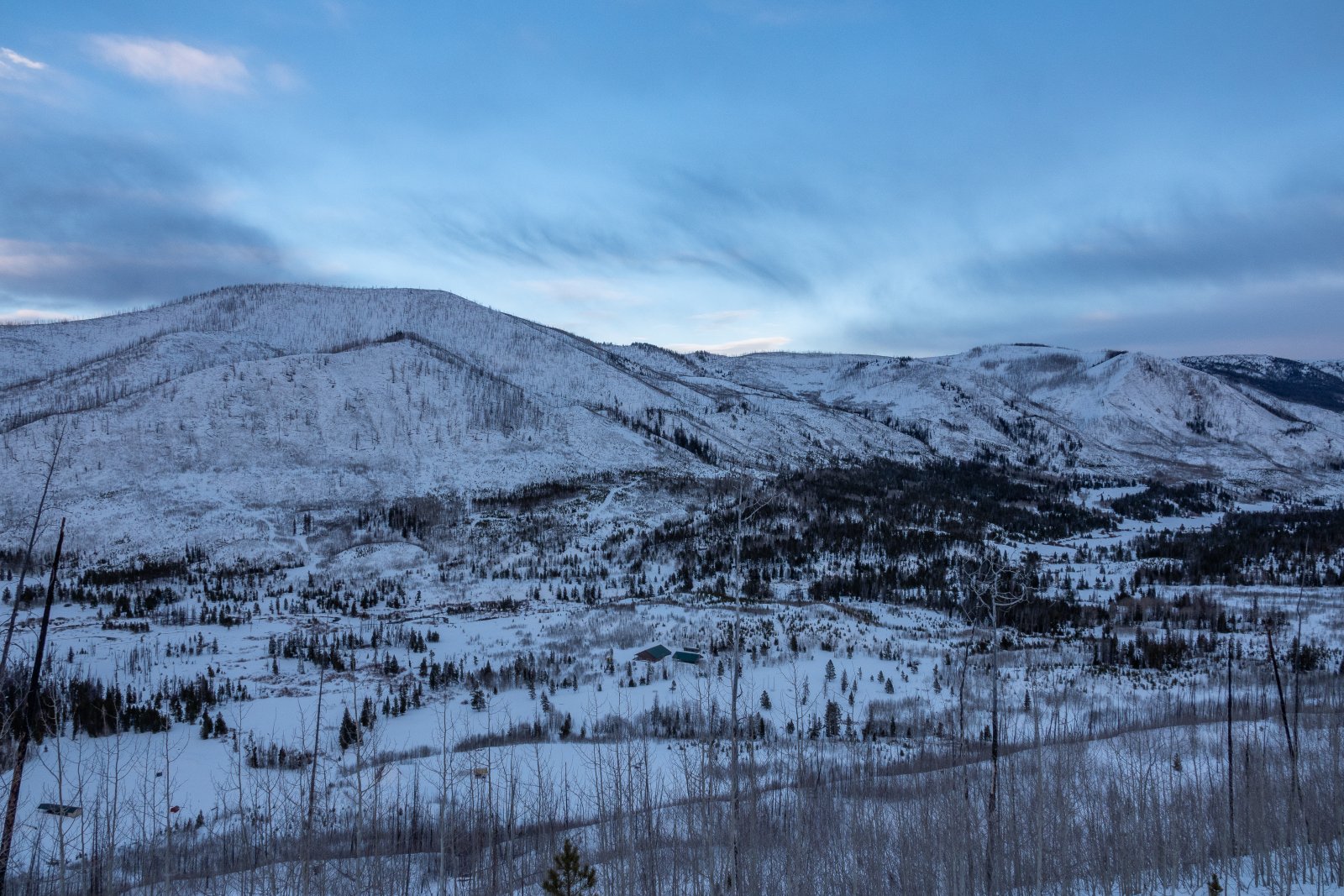 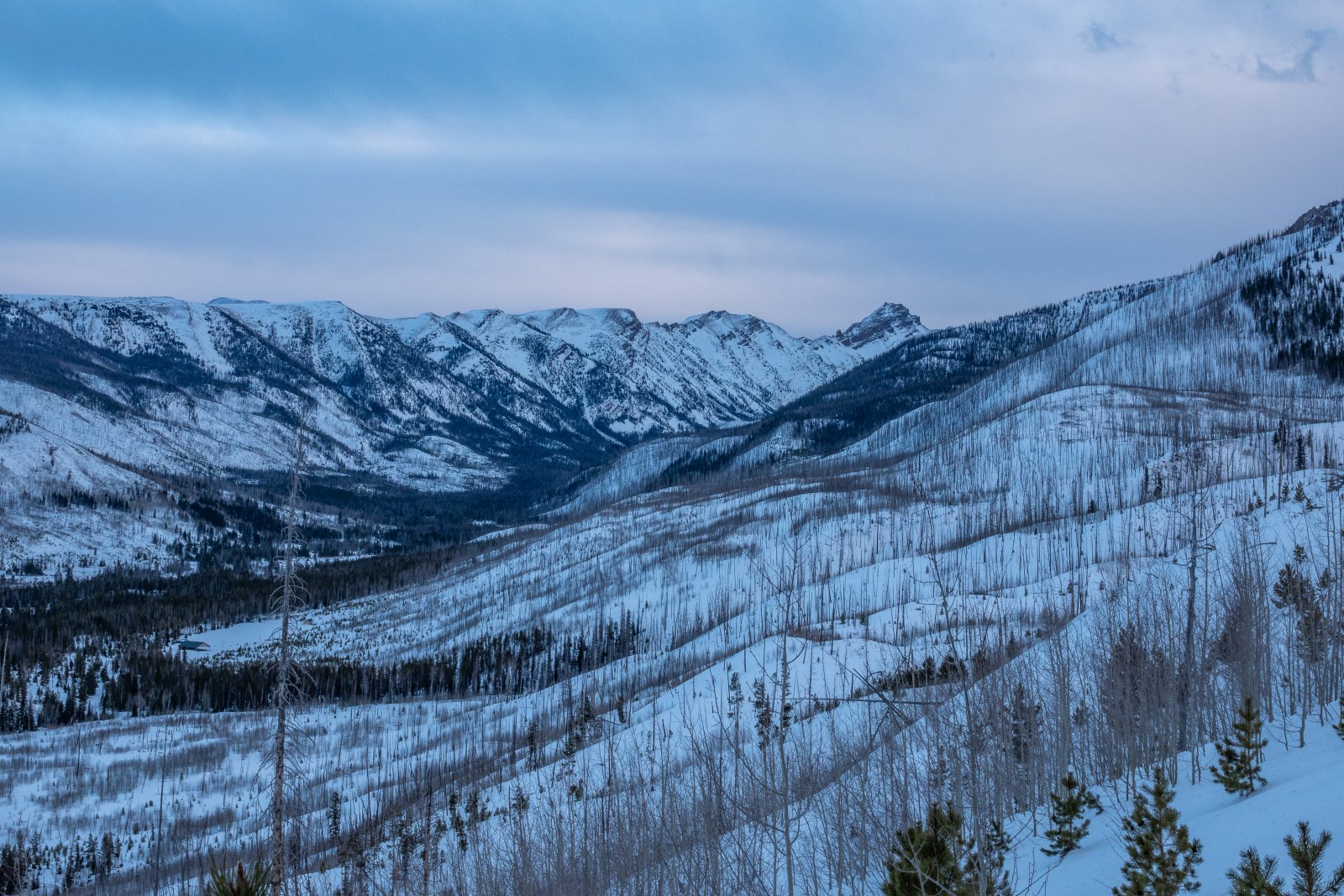 Getting a bit chilly now. Back to the yurt for some dinner and some sleep.

Monday morning I initially woke early at about 5:00 am as the temperature in the yurt had taken a bit of a nose dive. I got the fire going in the stove again and stoked it well. Jumped back into bed and drifted back off until about 8:30am. With the comfortable temperature inside I had all but forgotten I was at 9000 ft in the middle of winter. Once out of bed and enjoying a cup of hot chocolate I had to attend to chores. First up, chop wood to restock what I had used during my stay. Cleaned up the place and got my gear packed up and I was ready to head out. Today would require a few more layers than the previous day. There was 4-6 inches of new snow at this point and it would continue snowing all day. The wind would keep a chill on things with the temperature being somewhere between 0 - 5 ish I would estimate.

The trip out would of course be faster as it was pretty much all down hill. Most of the slope would not be sufficient to do much gliding on the skis but was definitely easier. I also found that rather than push me down hills the pulk actually held me back just a bit. This actually made it easier for me to go down the steeper sections with out crashing I actually managed to make the whole trip without falling one time. I was amazed!

When I approached to the trailhead the weather had deteriorated a bit more. 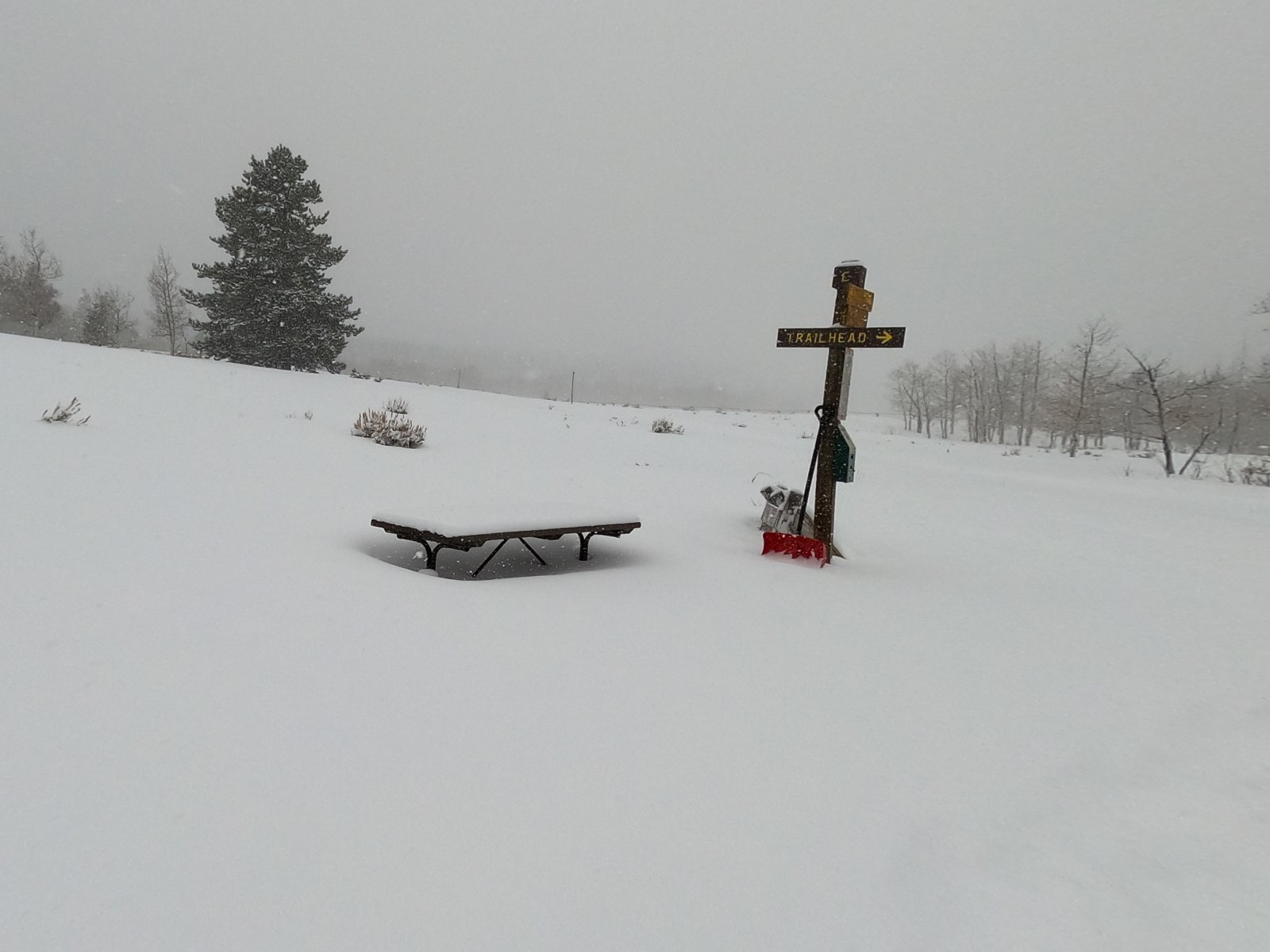 The thermometer in the truck showed it was 11 degrees. With the wind I would guess the wind chill would be down around zero. In all that I had managed to stay comfortable except my hands were a bit colder than I would have liked. I just need a bit heavier glove under my GTX mittens and I would have been fine. I had picked up a pair of ski goggles from REI at the last minute. I'm really glad I did. They made a big difference with the blowing snow. I did not emerge completely unscathed though. The snow beard made talking to some folks at the trailhead pretty humorous My buff was pretty much frozen to my chin, too. 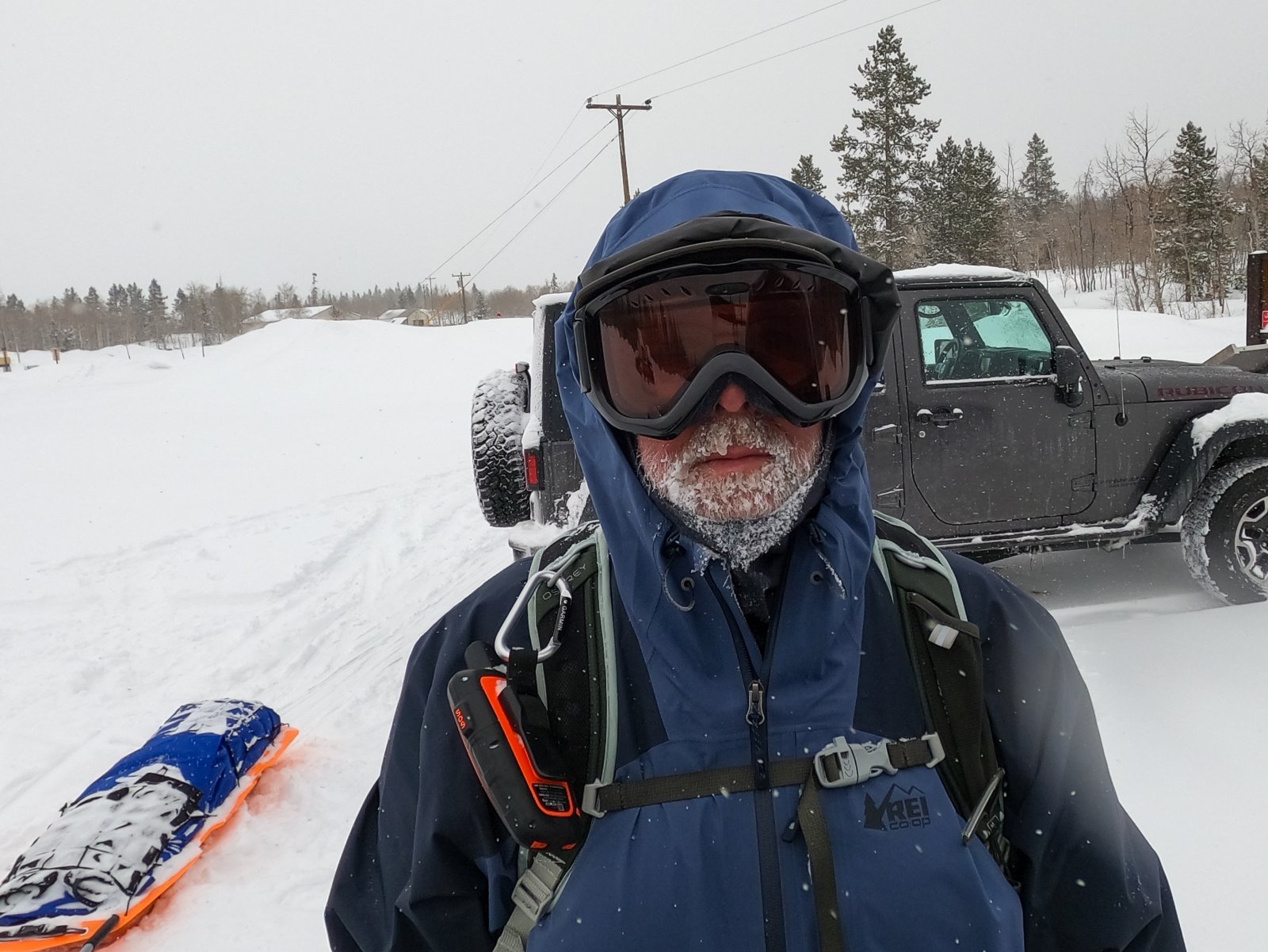 The trip ended up being about 11 miles out and back with about 900 ft of elevation gain so it was a good couple of days. Ready to do it again!
Last edited: Feb 12, 2020

Awesome trip and report. I'd love to do something like that.
My trip reports: backpackandbeer.blogspot.com

That hut looked like a pretty sweet setup. I was surprised to see they'd piped gas into it!
Here we find Nature to be the circumstance which dwarfs every other circumstance, and judges like a god all men that come to her.

Wanderlust073 said:
That hut looked like a pretty sweet setup. I was surprised to see they'd piped gas into it!
Click to expand...

It was really nice to be able to get out of the weather for sure. Made for a nice base from which to explore the area.

Yeah, each of the yurts has a large propane tank. The grille on the porch is even plumbed with gas. I'm told one of the newer yurts actually has battery powered electric lights renewed by solar panels.
You must log in or register to reply here.
Similar threads