The weather forecast looked perfect for 3 nights in the Virginia Highlands, but I was a little nervous about "blustery".

I dropped the kids off at school and headed to SW Virginia and the Elk Garden Trailhead. After a 5 hour drive I saw something like below. You can see the trailhead/road in in the middle. Evidently the rainy weather that blew through KY also went through VA. It was interesting driving up to the trailhead because there was a very distinct freeze line in the trees. At the trailhead, all the trees were covered in blown snow, very pretty. The thermometer in my car said 36 degrees. 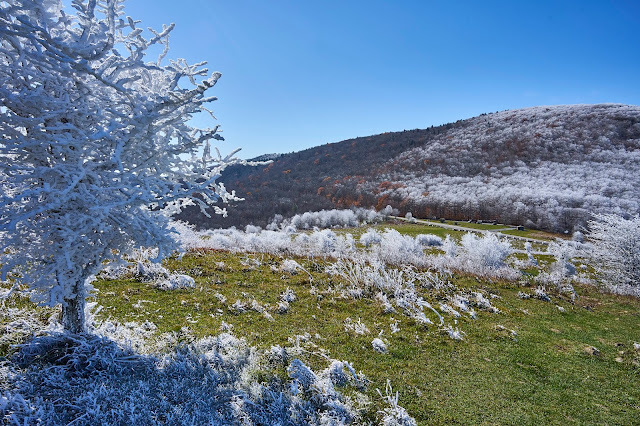 I started hiking up the Appalachian Trail and soon was into the trees. The sun was melting the snow pretty quickly and the wind was blowing it around a bit, but it was very pretty. I did not take a lot of photos through here because I did not want my camera to get wet from the dripping snow/water. 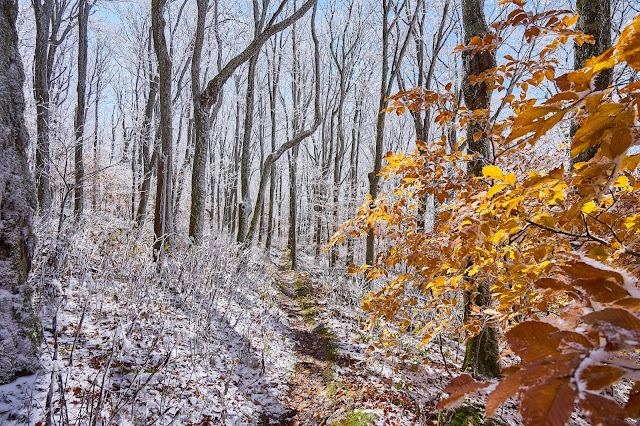 One stretch of the trail, the sun was hitting the snow covered branches so it looked like they were glowing. The photo doesn't really capture the full effect, but I still like it. 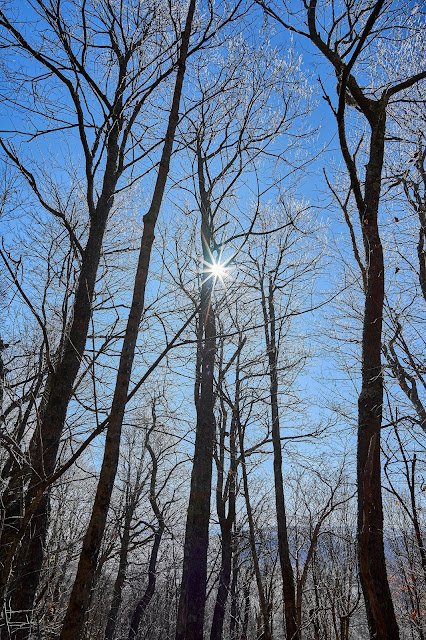 After about 2 hours of easy hiking I was back out of the trees and saw the first ponies. I also had a decision to make. One camp possibility was to stay on Brier Ridge with the ponies and great views even though it was only about 3pm. The other possibility was to keep hiking for a couple hours and hope for views (and finding water up high). I decided to be lazy and hang out with the ponies and wait for sunset.

So I found a nice spot a little out of the wind with easy access to water and then wandered around a bit talking to wild ponies and waited for dinner time and the sunset. 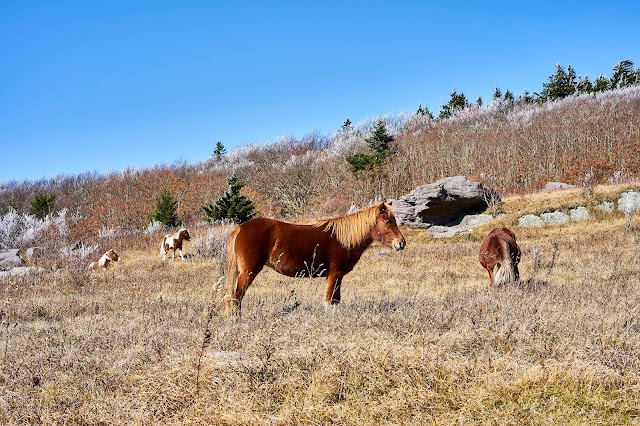 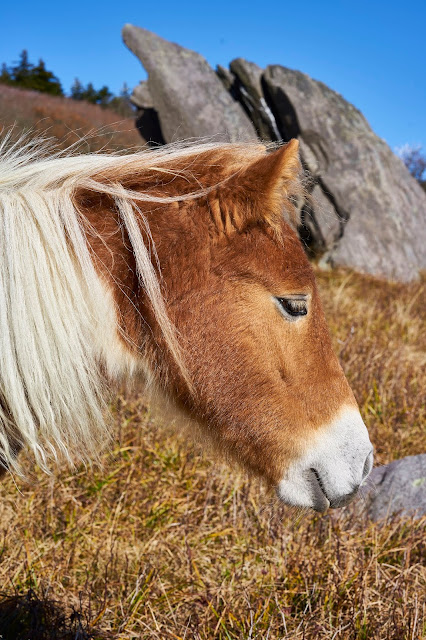 As it got closer to sunset time, I happened to look down the hill and saw a fox who was heading up the hill and then noticed me and immediately froze and then ducked back into the trees. I don't think I have seen a fox while backpacking before.

Waiting for the sunset was worth it, but it started to get cold once the sun went down. 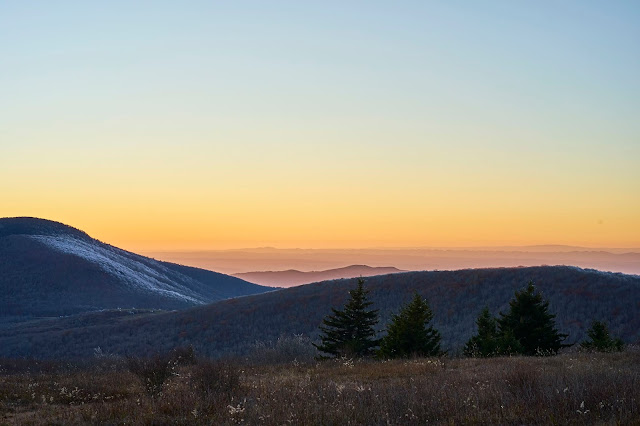 As it got dark, I started hearing voices. A small group had set up camp just over the ridge. I was a little disappointed that my illusion of solitude was destroyed, but they weren't to loud. And then I heard the harmonica and thought I might have to go kill them. Thankfully, it was only a couple notes and then nothing else, so no killing tonight

Unfortunately, the moon was almost first quarter and was right over the middle of the Milky Way, so I knew astrophotography wasn't really in the cards. There also weren't any clouds making for awesome sunsets or star trails. So, I took some photos, enjoyed the stars and just to see what happened, left my camera set to take some star trails and crawled into bed to escape the wind. 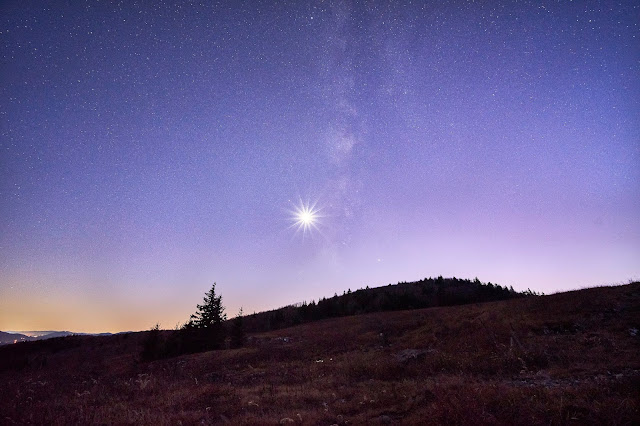 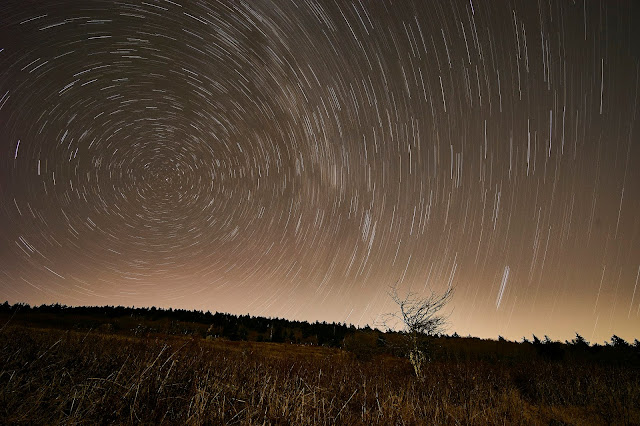 I woke up to a beautiful day and a nice sunrise. 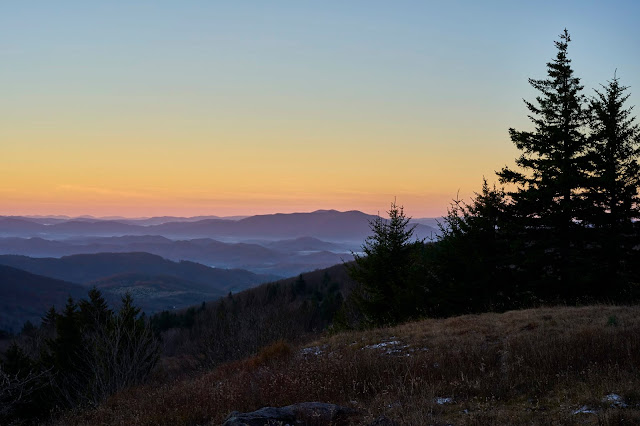 Panorama from 5 photos. I'm very glad I stayed here to wake up to this view. 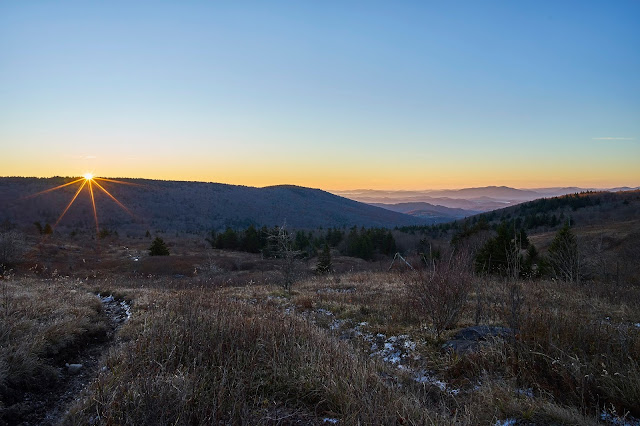 I packed up and headed down the Cabin Ridge Trail to intersect with the VA Highlands Trail and then reconnect with the AT. It wasn't until I got on the AT and close to the state park that I started to run into dayhikers.

I was thinking about lunch as I got up near Wilburn Ridge. I'm not sure why I looked when I did, but all of a sudden I saw a bear cruising up the side of the ridge heading sort of towards me. He obviously did not see me, so I was hopeful for a decent photo, but I had a 21mm lens on my camera. I kneeled down and quickly switched to my longest lens (a 65mm) and hoped the bear would come sort of towards me. Unfortunately, he continued up through the brush and the best photo I got was of his back/butt mixed in the brush. He never noticed I was there and I never figured out why he was in such a hurry.

On to more hiking, I continued on the AT and into the State Park and then past all the day hikers.


Pony on the AT 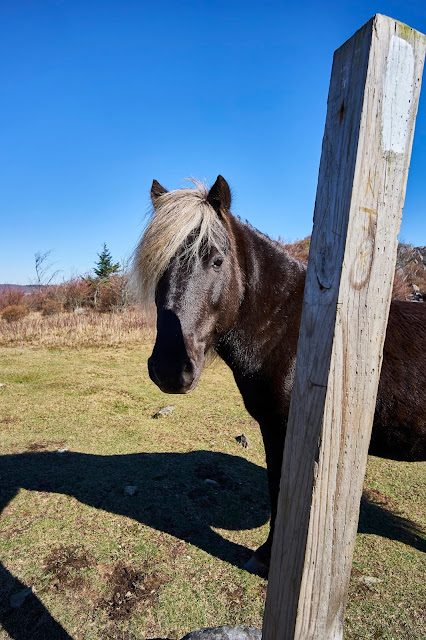 I continued on the AT and out onto Stone Mountain and another view. This was the night with the "blustery" forecast, but I wanted to see stars again. In retrospect, I should have camped down in the trees and out of the wind. I managed to find a small flat spot sheltered by a large group of rocks, but the wind was blowing a constant 20 MPH and gusts were probably about 40 MPH and the overnight low was about 25 degrees, In other words, it was too cold to enjoy the stars. 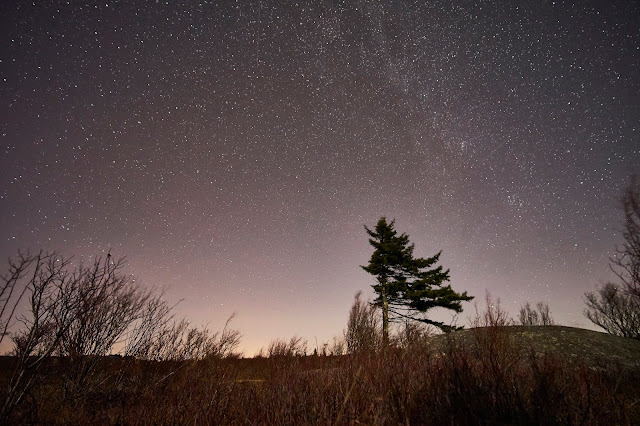 ... and then set my camera up for more star trails. I was in bed reading when I realized I had not adjusted the aperture for a 1 hour photo, but it was too windy for me to care. 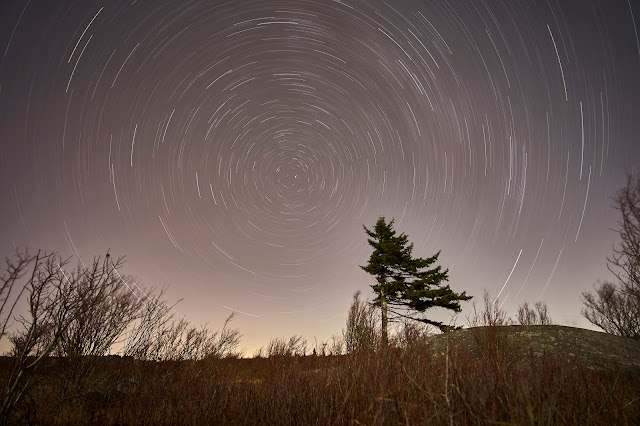 After sleeping like crap because of the wind, I woke up to another beautiful, but windy, day. 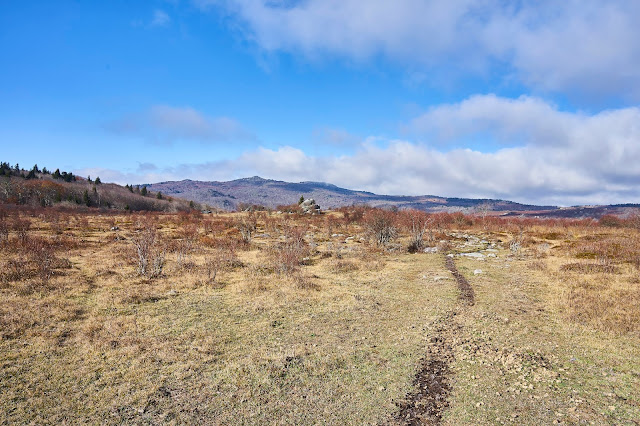 I headed down the trail to the Scales (where they used to weigh cattle) ... 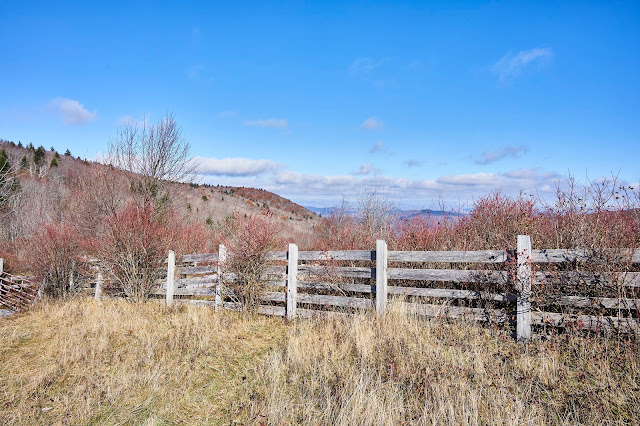 ... and then continued on the Crest Trail, where I found more ponies. 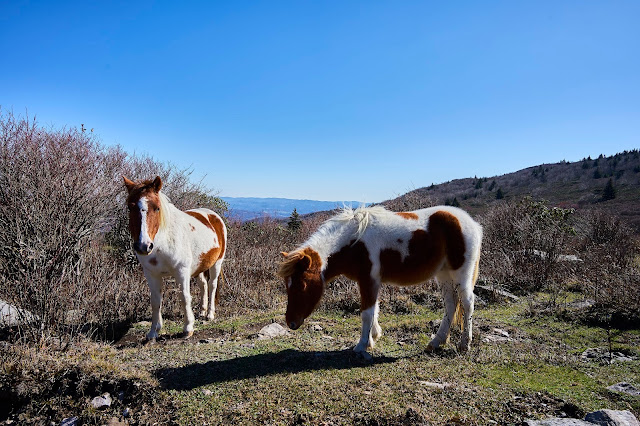 It was about 2pm and I had another decision to make for campsites. I could stay near Wilburn Ridge (near where I saw the bear), with easy access to water and great views. Or I could go back to Brier Ridge and the first night's campsite with great views and easy water.

I decided to stay where I was since I was only a couple hours from the trailhead. I could poke around, relax a bit and had a ton of time to find some firewood for my first solo campfire since March. So I read a bit, explored a bit, and generally relaxed a lot and waited for sunset time and stars.

View from my front porch, note the fire on the left near my camp chair that was really being used for the first time this trip. 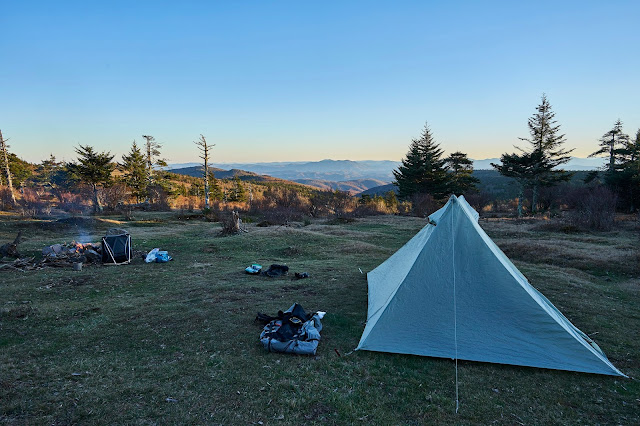 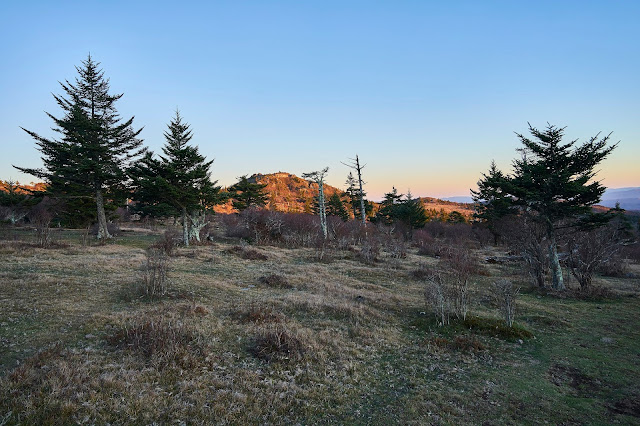 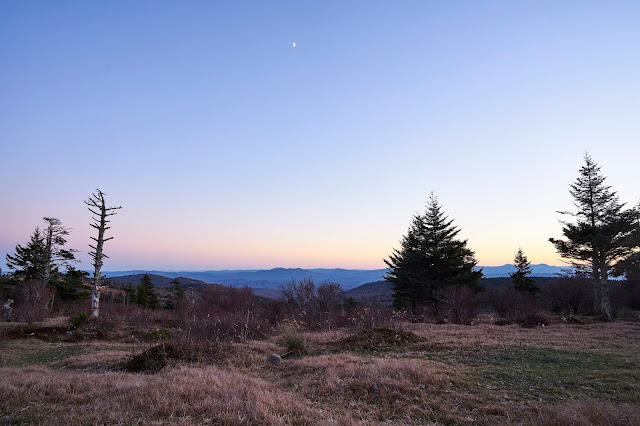 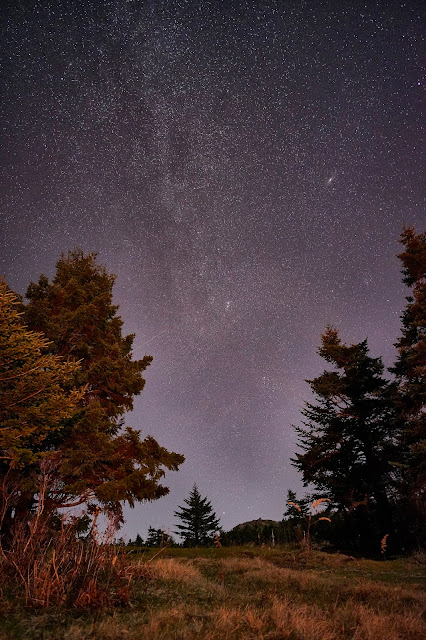 I woke up about a half hour before sunrise, but really did not want to get out of bed. I managed to take a couple photos by sticking my arm/camera out the tent and aiming in an appropriate direction. I'm kind of pleased how well this came out given the half-assed approach 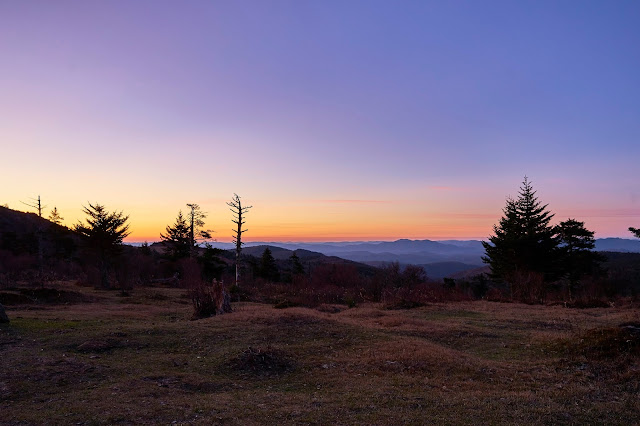 I packed up and headed towards the car. Not a many photos today, but I found a shallow creek area with some interesting ice patterns, so one last photo to finish the trip. 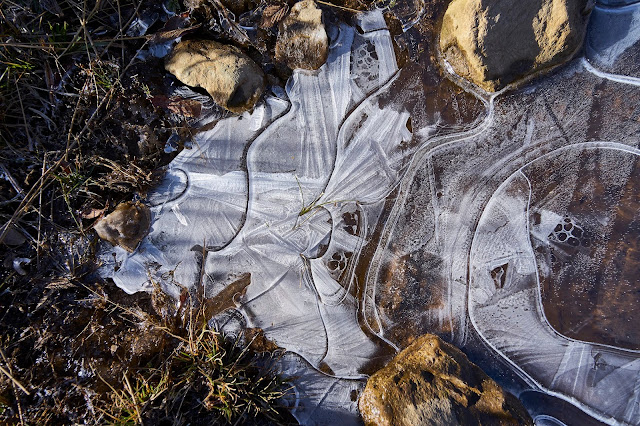 In the end, I only hiked about 24 miles over 4 days/3 nights, but other than the wind on the second night, had a great trip. I usually like hiking more, but it was very relaxing to just sit and wait for the sunset and stars. I probably need to do more trips like this in the future.
My trip reports: backpackandbeer.blogspot.com

great pics! Definitely different conditions than I had
Those winds can get epic up there.
“Something will have gone out of us as a people if we ever let the remaining wilderness be destroyed ... We simply need that wild country available to us, even if we never do more than drive to its edge and look in.”
- Wallace Stegner

Great trip! Beautiful sunrises and I love the ponies. How close were you to the black pony? Do they approach people?
Kind of funny about the harmonica..... but good it stopped quickly! I think it’s a great idea to also relax and enjoy everything, was there whiskey involved?
You certainly had better stargazing than we had the last 3 nights camping under the full moon in Canyonlands!

I love those sunrise and sunset shots with the layers upon layers of ridgelines in the distance. And very cool you got to see a bear!

Do you see many people backpacking in those areas this late in the season with the cool temperatures?
W

Titans said:
Great trip! Beautiful sunrises and I love the ponies. How close were you to the black pony? Do they approach people?
Kind of funny about the harmonica..... but good it stopped quickly! I think it’s a great idea to also relax and enjoy everything, was there whiskey involved?
You certainly had better stargazing than we had the last 3 nights camping under the full moon in Canyonlands!
Click to expand...

The ponies will come right up to you, not afraid at all. The signs say to not touch or feed, but of course people do both.

No whiskey this trip, I decided that is was going to be cold enough that I wasn't going to be in a sipping bourbon mood. Sort of regretted that on the last night when I had a fire


Jackson said:
I love those sunrise and sunset shots with the layers upon layers of ridgelines in the distance. And very cool you got to see a bear!

Do you see many people backpacking in those areas this late in the season with the cool temperatures?
Click to expand...

I was surprised by the number of backpackers I saw on the AT, probably passed 5 or 6 different groups on the 2nd day. Off the AT, I only saw a couple people, most of my time was off the AT, so I was happy to have a semblance of solitude.
My trip reports: backpackandbeer.blogspot.com 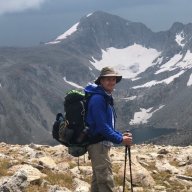 Nice report!
It's the beauty that thrills me with wonder, it's the stillness that fills me with peace.
You must log in or register to reply here.