Sunday afternoon I headed down towards Buena Vista, CO. The plan was to camp a couple miles up trail in Missouri Gulch, and meet a guy from 14ers at 4am to attempt to summit Mt Belford, Mt Oxford and (though it seemed unlikely to me) Mt Missouri.

The skies were looking pretty apocalyptic by the time I parked at the trailhead, but I hoped it was just the usual brief spell of afternoon ugliness. Unfortunately it turned out to be a bit rougher than usual.

I had put my boots and pack on and made it just about as far as the wilderness signage when the thunder and lightning started and it began to hail. I hunkered down in my truck for a while, until the worst of it seemed to pass. When things dialed down to a drizzle I headed back out and tried to get up the trail.

Clearly it had been as bad or worse up top, because the trail was now a running river of water. This is a pretty steep trail in to the gulch, rising over two thousand feet in less than two miles. After falling four times it became obvious I wouldn't be hiking up it any time soon. I texted my apologies to my would-be summit partner, and decided to drive in whichever direction appeared to have the kindest looking skies.

This turned out to be north, and a very pretty drive up 24 got me to 70 where partly cloudy skies sat atop a drenched landscape and an absolute stand-still of Sunday traffic leaving the mountains. I drove east through the tunnel and hopped off at Georgetown where I spent the night in a motel.

All of which is a long-winded prelude to what I actually did this weekend other than put 400 miles on my truck to end up playing around an hour from home. From Georgetown it's a twenty minute drive up Guanella Pass to the trailhead for Mount Bierstadt. This is a pretty entry-level 14er, so I figured I'd get at least get one under my belt.

The parking lot had only about a dozen other cars in it when I got on the trail about 5:45a. The trailhead sits right at the top of the pass at around 11,600 feet so it's eye candy in all directions. Arriving on a Monday and getting a decently early start, it felt like I had the trail to myself for most of the hike. Quiet and peaceful. 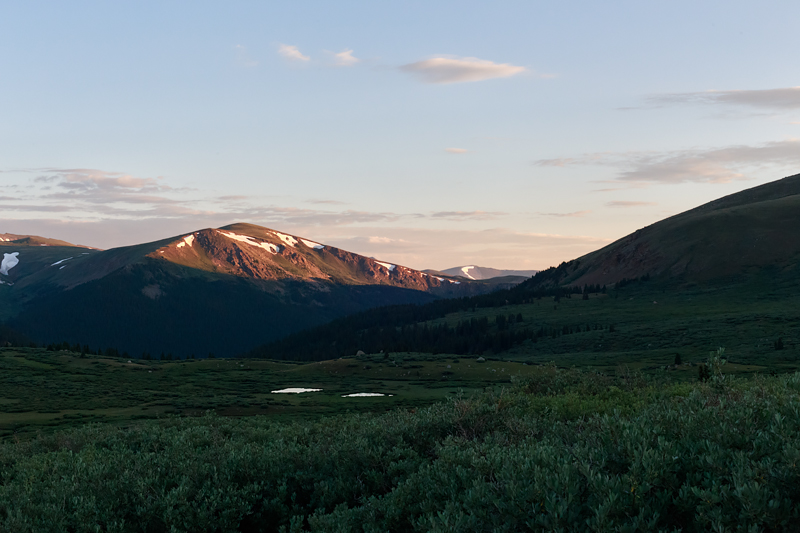 Mount Bierstadt dominates the view to the east right from the start. The Sawtooth ridge runs from its summit to the north and can be scrambled across to continue on to Mt. Evans.

The trail is easy going pretty much the entire 3.5 mile route up. You pass through meadows dotted with lakes and thickets, walk a boardwalk through some marshes, and then cross a stream before the trail starts to climb the mountain in earnest.

Picture from near the trailhead (taken after I'd come back down): 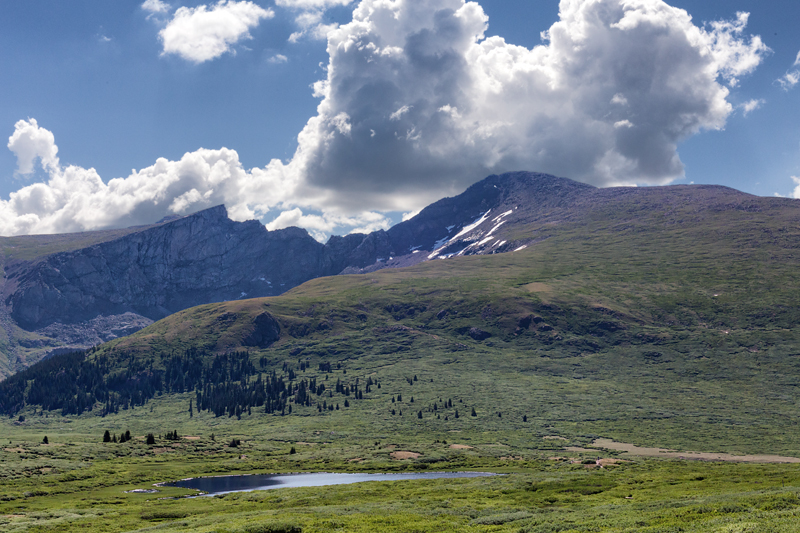 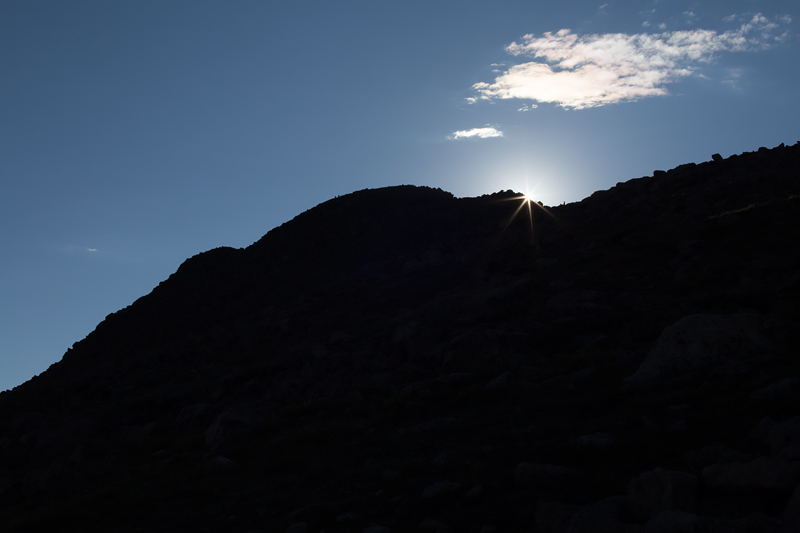 A look back down the trail from around 13,500 feet. The small specks of white above the lake in the lower right corner are cars at the trailhead parking lot. Argentine Peak is the snow covered mountain with the long ridgeline in the center of the picture. Grays rises behind it and to the right. 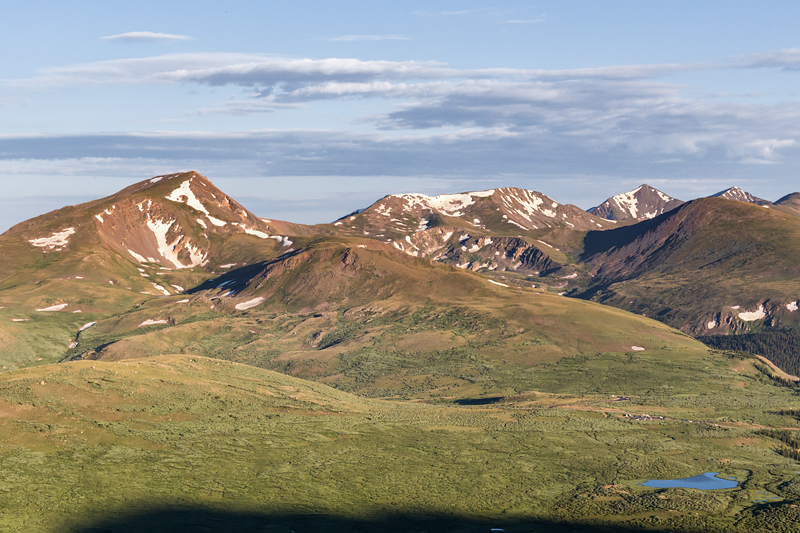 A view looking northwest from the same vantage. 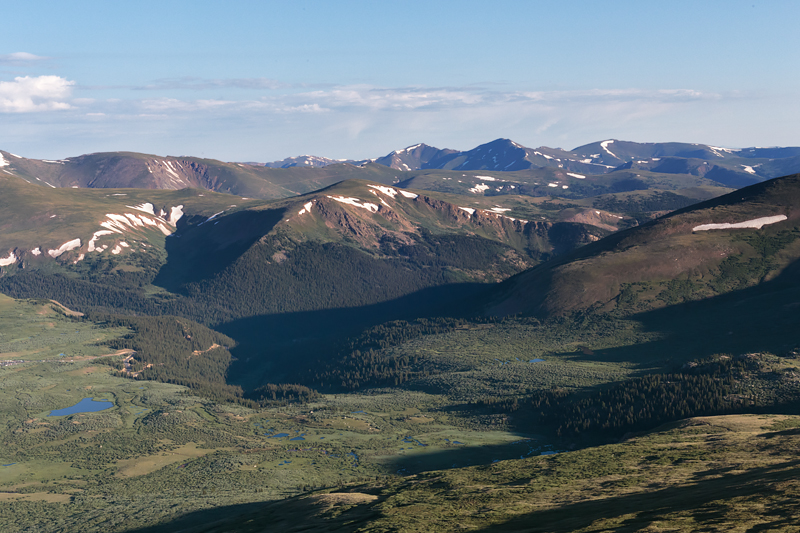 Eventually the trail gives way to a fair sized boulder field and it's pretty much a choose your own adventure sort of deal for the last 300-400 feet to the summit itself. Some snow remained around the summit, but all of it could be avoided. This looks south towards the Sawatch range where I'd been stormed on the night before. 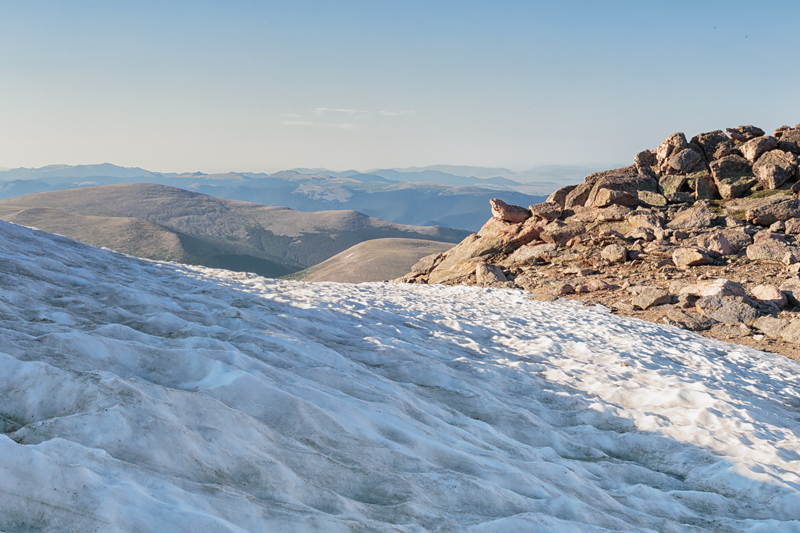 I reached the summit shortly before 8am, just a hair over two hours one way. I had passed three people on their way back down, and there were 4 others sitting up top when I arrived. Not bad at all and nothing like the human zoo I had read this mountain can be on weekends.

Views from the summit: 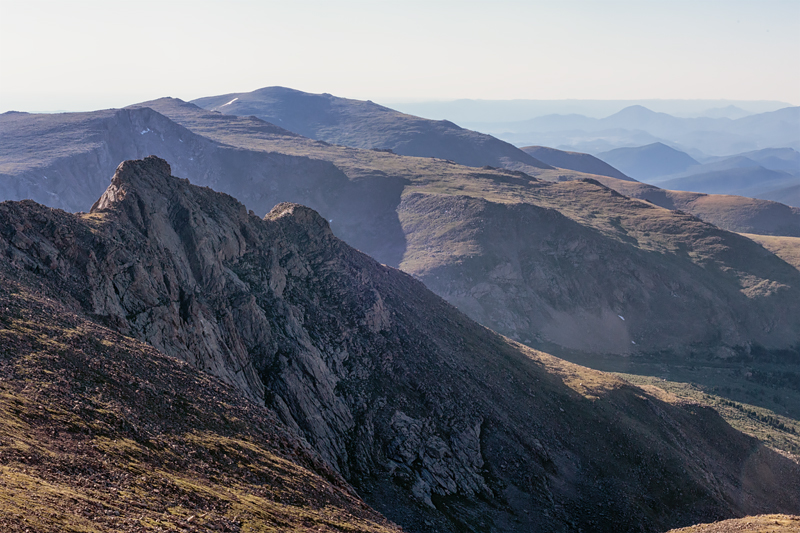 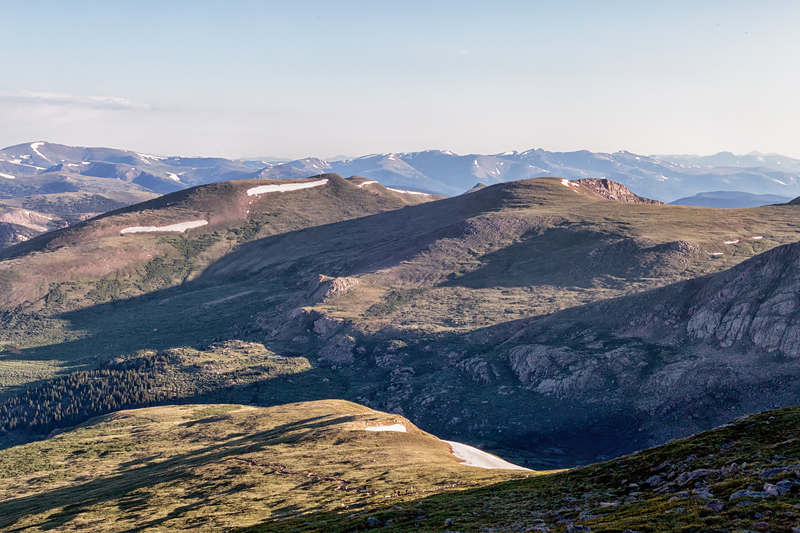 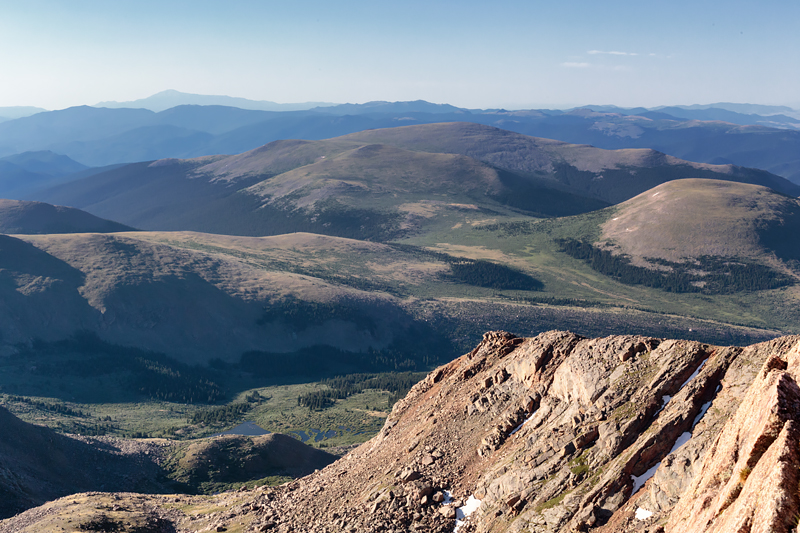 Here I am happy to have gotten to the top at 14,065 feet. The whole hike was relatively easy, and I felt just fine this morning and was able to go out for my run same as any other Tuesday. I think having a legit trail makes a world of difference as the off-trail, scree-fest 13er I did a few weeks ago left my legs wrecked for the better part of a week. 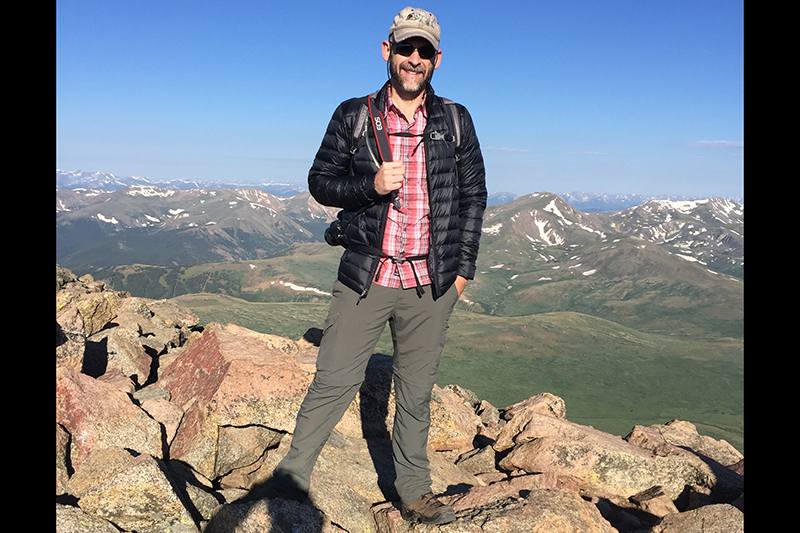 The hike down was uneventful and I spent nearly all of it chatting with a new acquaintance. Once back down on the trail proper, the reputation for crowds of hikers was realized and I was glad I had gotten an early start.

Last edited: Jul 19, 2017
Here we find Nature to be the circumstance which dwarfs every other circumstance, and judges like a god all men that come to her.

Nice report and photos - really enjoyed the video - brought back some memories. When I climbed it, I didn't realize there was an easy trail going through the willow thickets. There wasn't anyone on that part of the trail (it was late fall on a weekday), so I didn't even know it was there. I had parked down the road a ways from the main parking lot and cut across, and why I don't remember, maybe I hadn't noticed the parking lot either - I get pretty compulsive and focused sometimes. I spent the better part of a half-hour wading/bushwhacking/cussing my way through the thick willows, getting my arms all scratched up. The mountain was great, but I dreaded the return through the willows. When I got back down, I was very happy to find a trail winding through them.

Your photos make up for the ones I didn't take, as I also forgot my camera. I'll never forget those &*$% willows.
Last edited: Jul 18, 2017
You must log in or register to reply here.
Similar threads