For the second time in a month, the weather in Virginia forced me to postpone my backpacking trip to the Blue Ridge Mountains. This time, I wasn't going to let the extra vacation day that I had taken go to waste. I noticed the weather forecast up in the White Mountains of NH was looking good, so I left work a little early on Thursday and headed up.

I decided to hike Mount Moosilauke because I was on a trip in the Whites with my wife the prior summer and we got rained out of our plans to hike Moosilauke. So I was cashing in my rain check.

Mount Moosilauke is one of the Whites 48 high peaks, but it has some very unique characteristics that set it apart. For one, it isn't connected to either of the two major ranges; the Presidential Range or the Franconia Range. It is set off to the side as the lone high peak in the southwest section of the Whites accompanied by smaller peaks. Secondly, it has a unique summit. The summit is a huge, expansive bald tundra. You could easily fit a few football fields up there on the summit. I walked about a half mile of trail on the bald summit, doing an out and back on part of the Appalachian Trail before returning to my route, and you get 360 degree views the entire time. While there isn't any one particular viewpoint or vantage point which caught my breath it was quite a unique feeling walking around on this enormous bald dome in the sky. I've read that Moosilauke's summit is almost always extremely windy but I lucked out and there wasn't even a hint of a breeze while I was up there. What I enjoyed most about this hike perhaps is that the large broad shape of Moosilauke results in very long stretches of trails through the alpine zone which I found very enjoyable.

I set up camp in the dark at this campsite next to a small creek which was about a 10 minute drive from the trailhead. There was nothing interesting about this site, but it was flat, secluded, and had a fire ring, so it suited my needs just fine as a place to sleep. 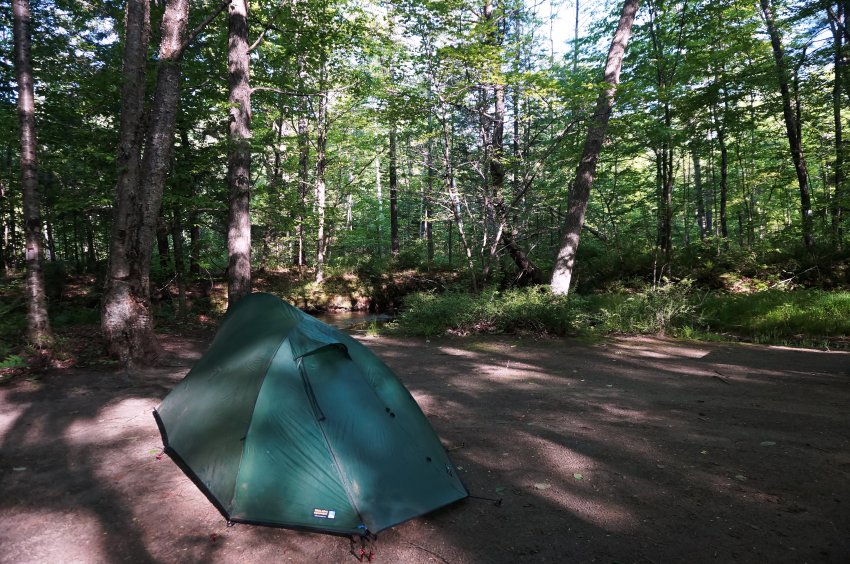 The trail first travels along a brook through a hardwood forest. The hardwoods gradually become replaced with coniferous pines. There are a few nice views along the way. 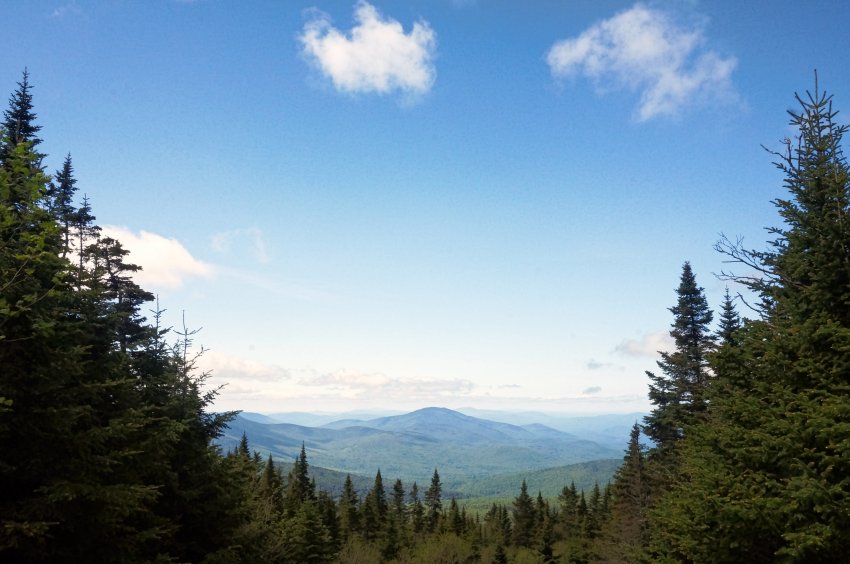 Eventually there are nothing but pines and the trail felt like a path of boulders at times. 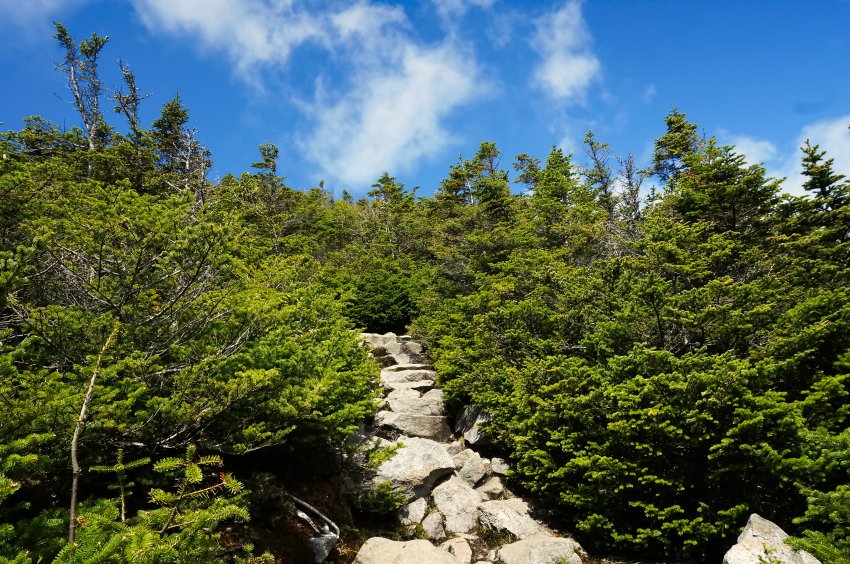 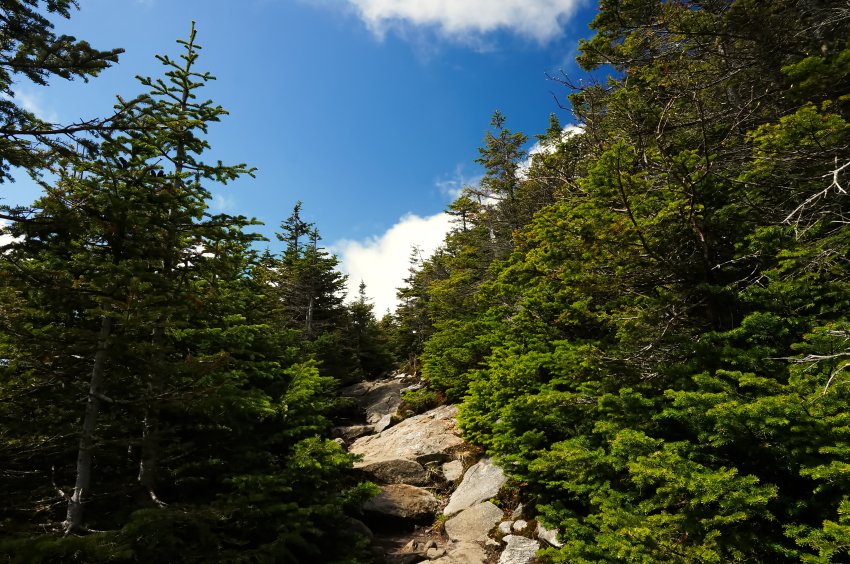 The views were mostly at my back on the ascent, so I made sure to stop often and turn around for a look. 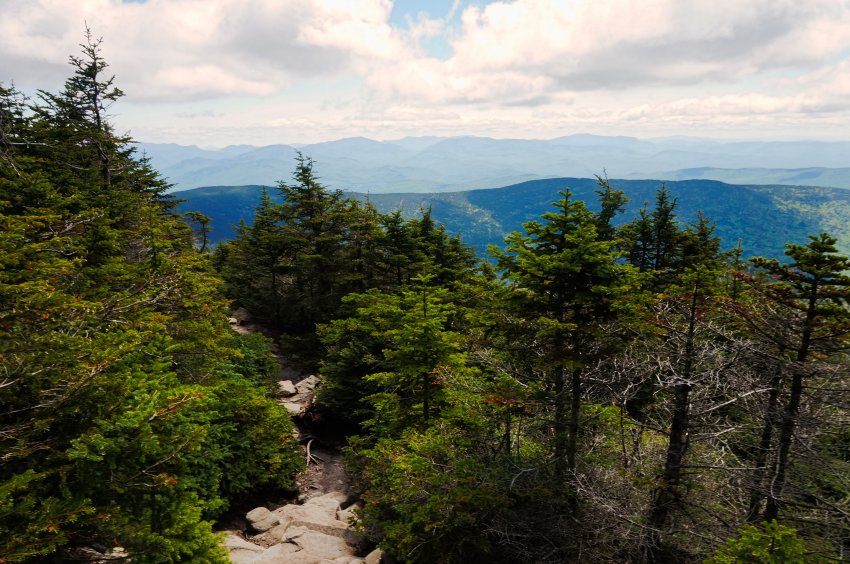 The trail eventually levels out and becomes a very pleasant alpine walk. 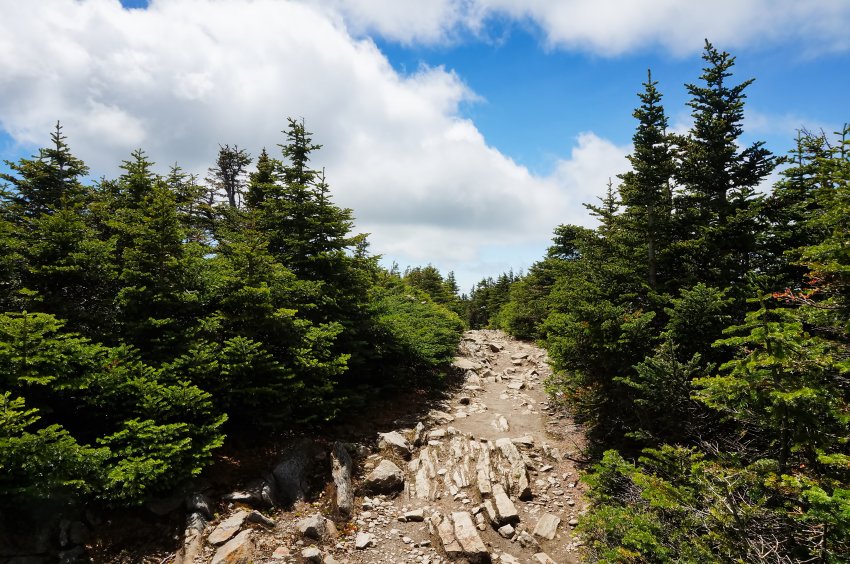 At a few spots here and there, the trees along the side of the trail cleared just enough for a nice look at some of the smaller peaks on the outskirts of the Whites. 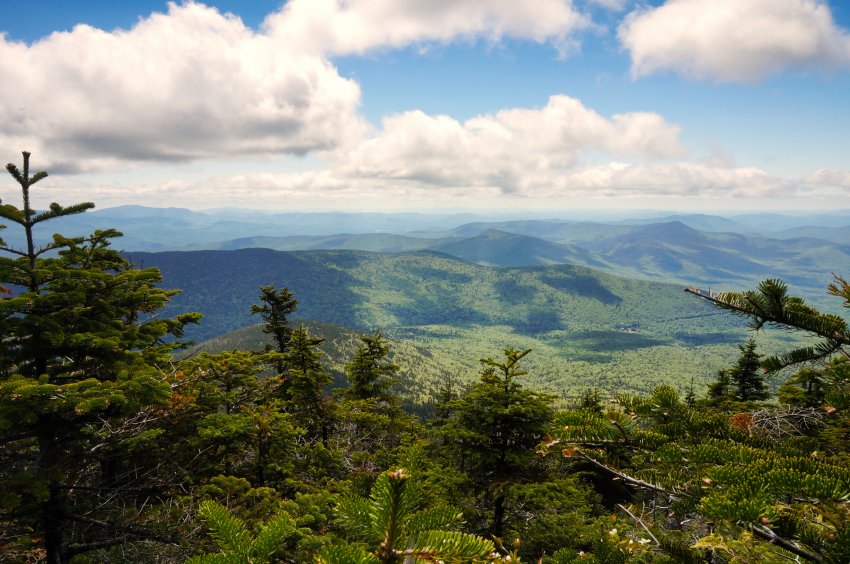 Another few shot looking back at the trail on my ascent. As you can see, the pines get smaller and smaller as you ascend. 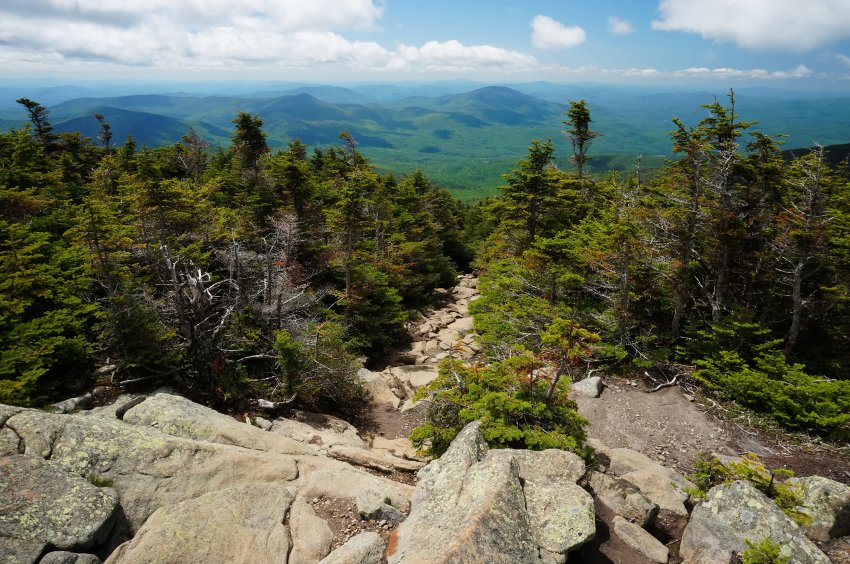 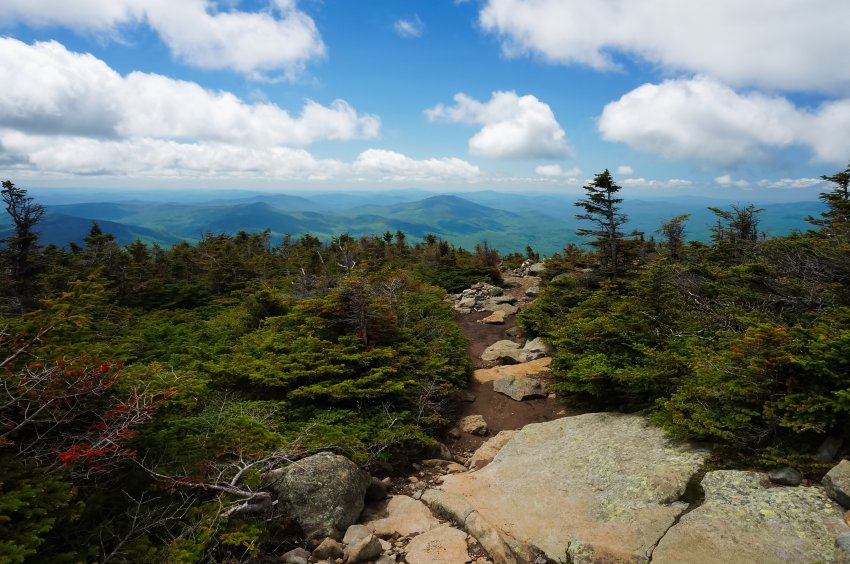 The first cairn I encountered. The cairns in the whites are for following the trail in the winter above treeline. 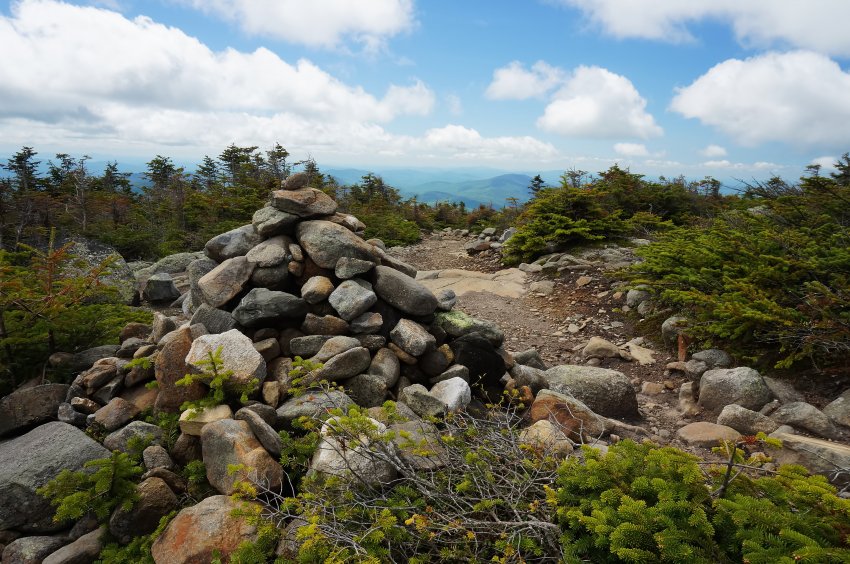 A few yards later, I made it to treeline and I could see that I still had at least a quarter mile (guessing) to climb to the summit. 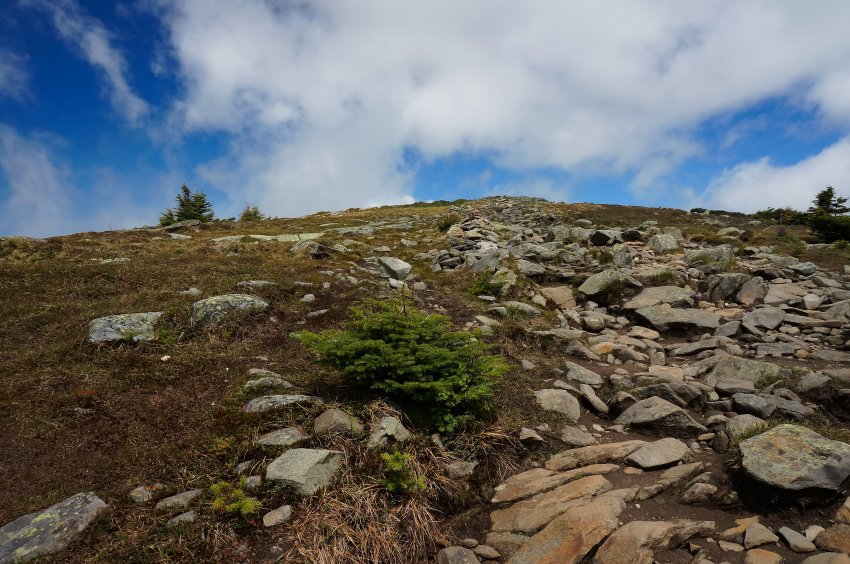 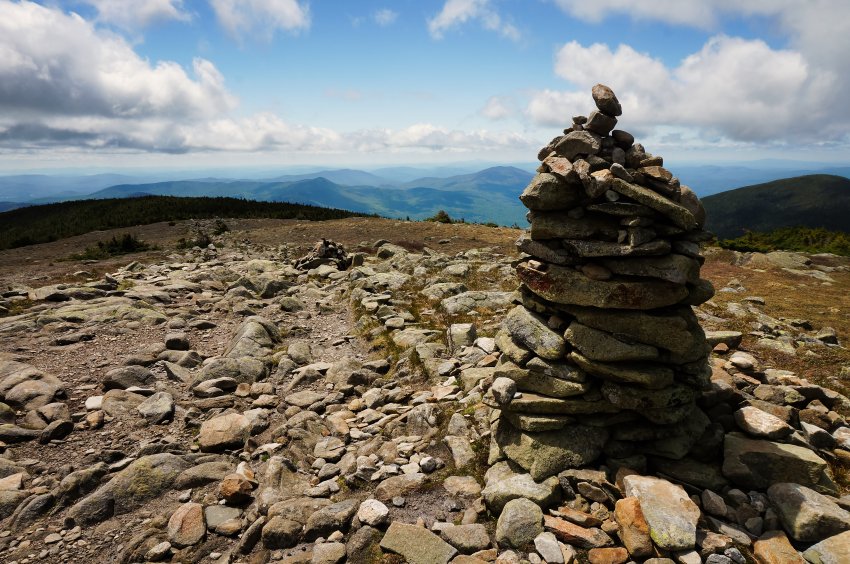 A look back at the trail I had taken from near the summit (The Gorge Brook Trail). 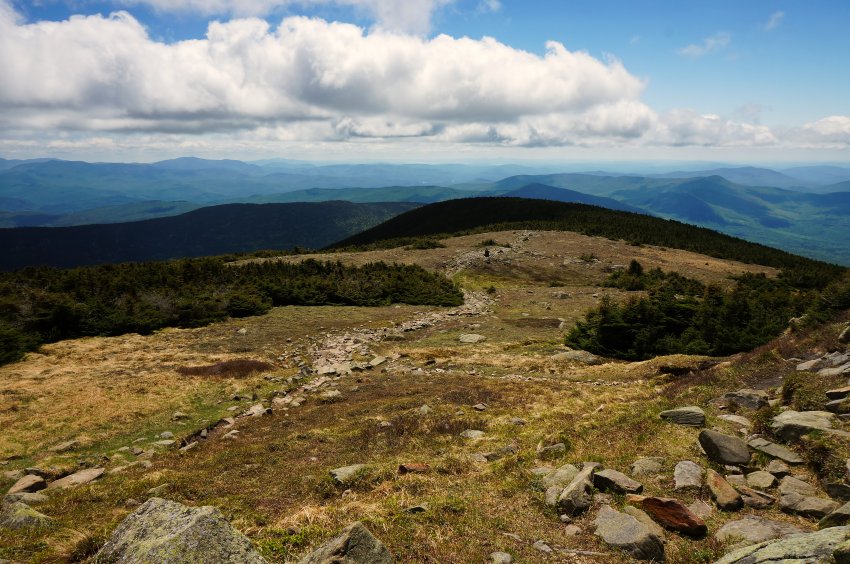 A look at the South Peak which is where I would be headed to next before descending. 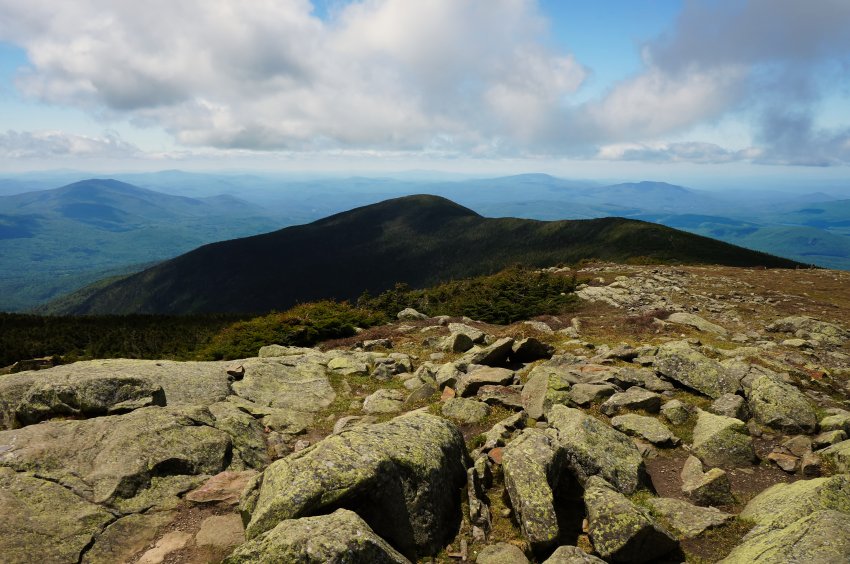 At the summit, the Appalachian Trail crosses and heads northeast towards the Franconia Range, then eventually the Presidential Range. 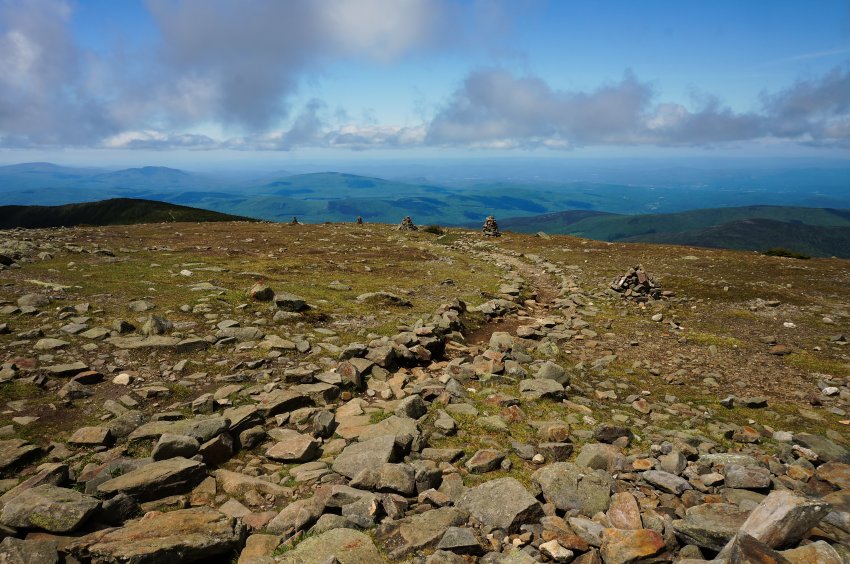 The Franconia Range off in the distance. 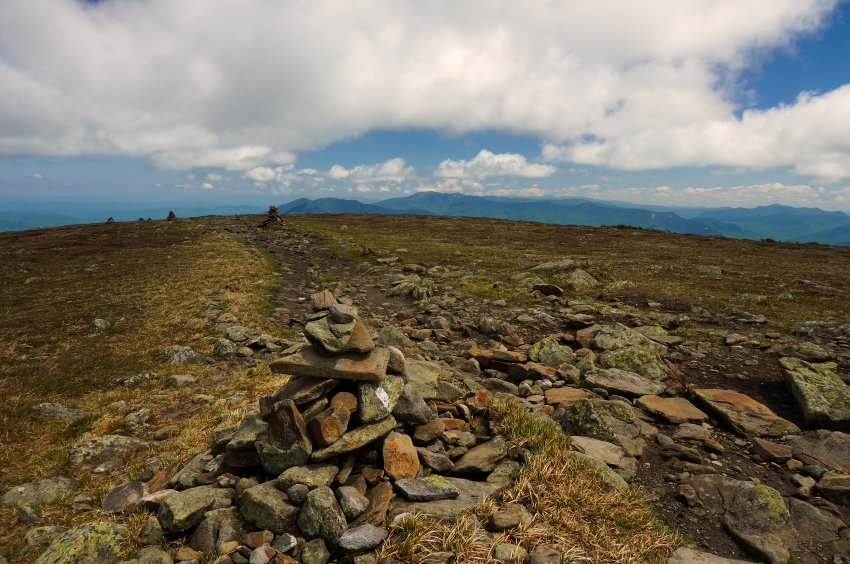 From the summit, I hiked about a quarter mile down the AT and back to get some different views. Another view of the Franconia Range. 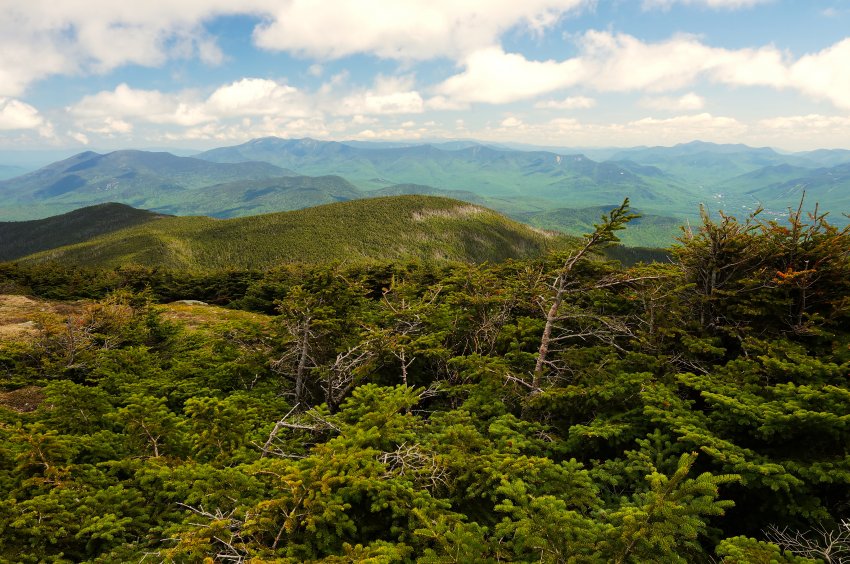 I turned back here as I didn't want to descend on the AT. 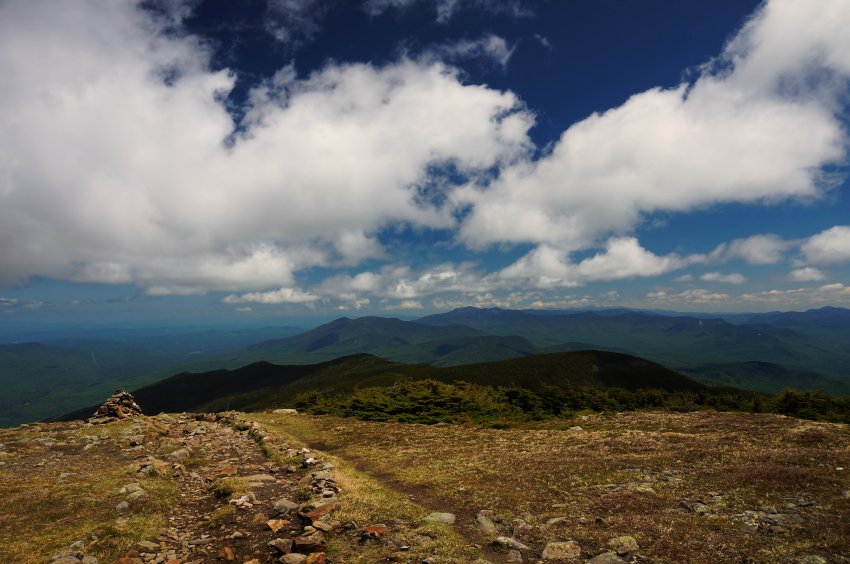 After turning around and taking the AT back past the summit, I headed towards the South Peak which is that hump to the right of the cairn. You can see the trail as a faint squiggle going up to the ridge to the South Peak. 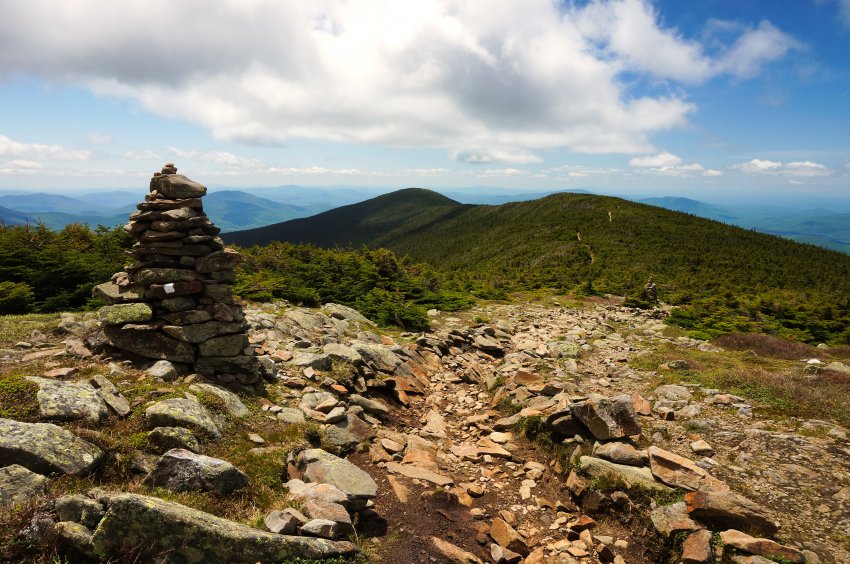 The trail enters back into the alpine zone for the next mile or so. 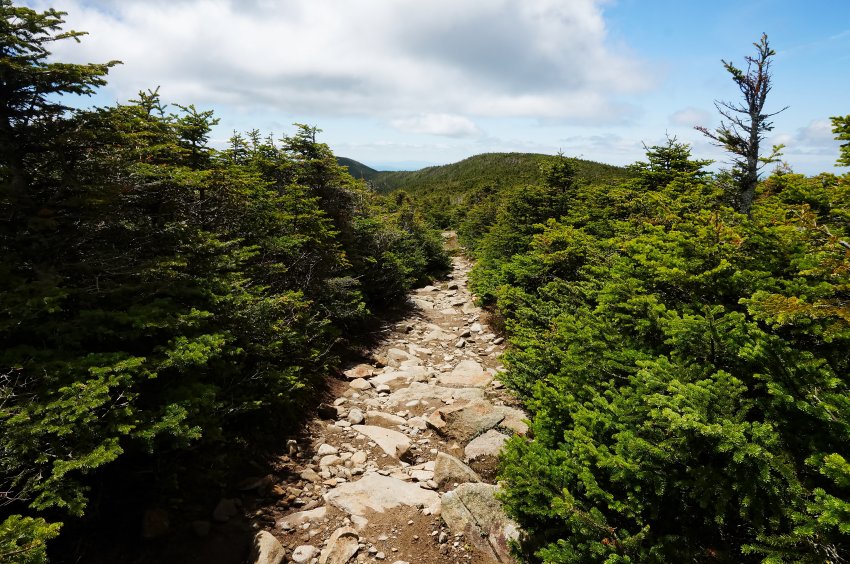 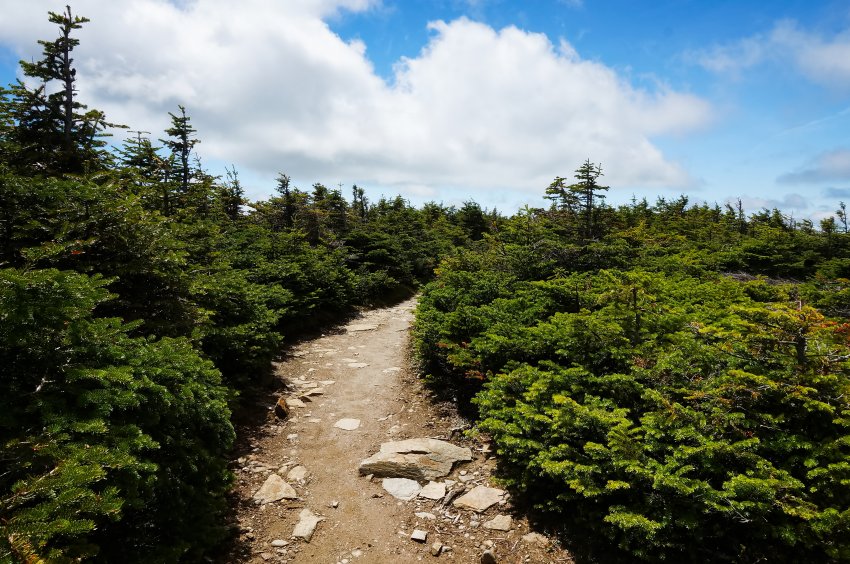 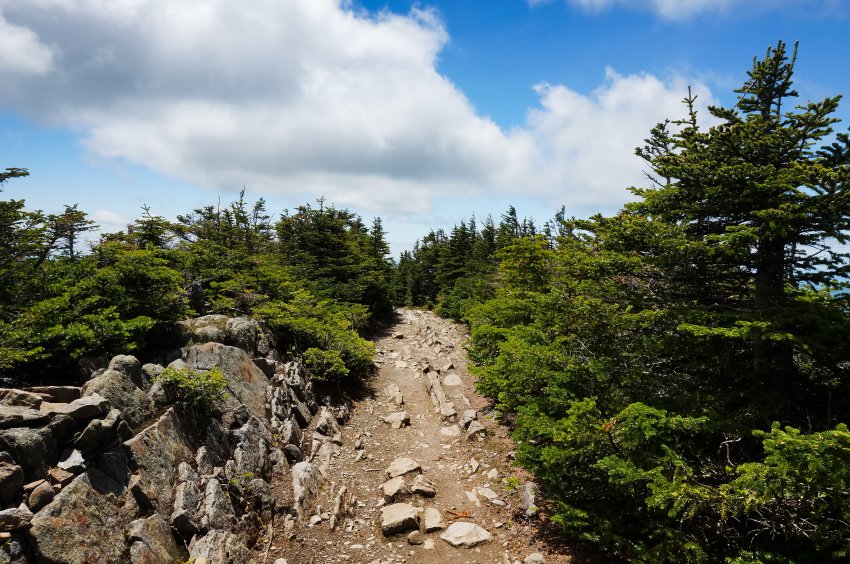 At this trail junction, the AT breaks off. Notice that on the AT it's not uncommon to see trail signs pointing hikers to Post Offices so that AT thru-hikers can pick up their resupply boxes. 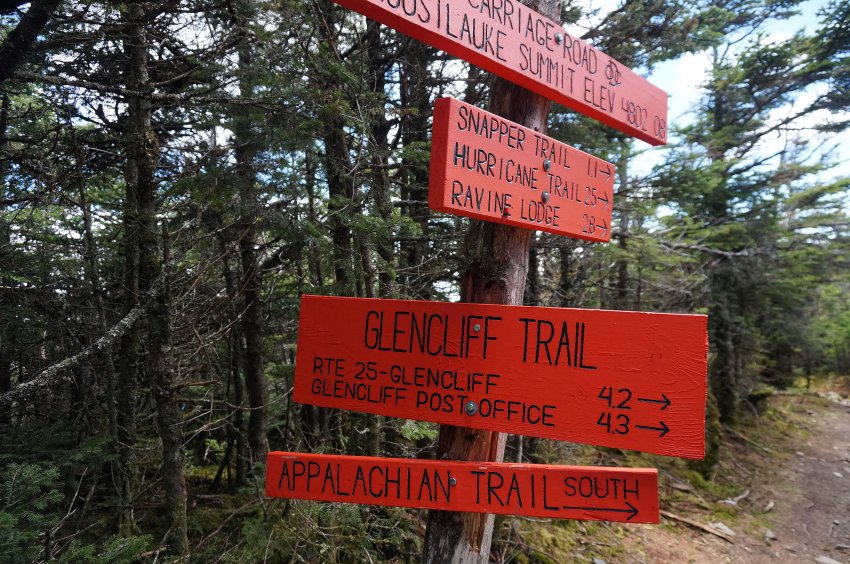 I recall @Absarokanaut telling me once on here that when I hike Moosilauke, to take the short spur trail near this intersection to climb to the top of South Peak (which is really just a false summit of Moosilauke). I took his advice and found the small spur trail and made the short 10 minute climb. The spur to the South Peak gave some nice views looking back at Mount Moosilauke. 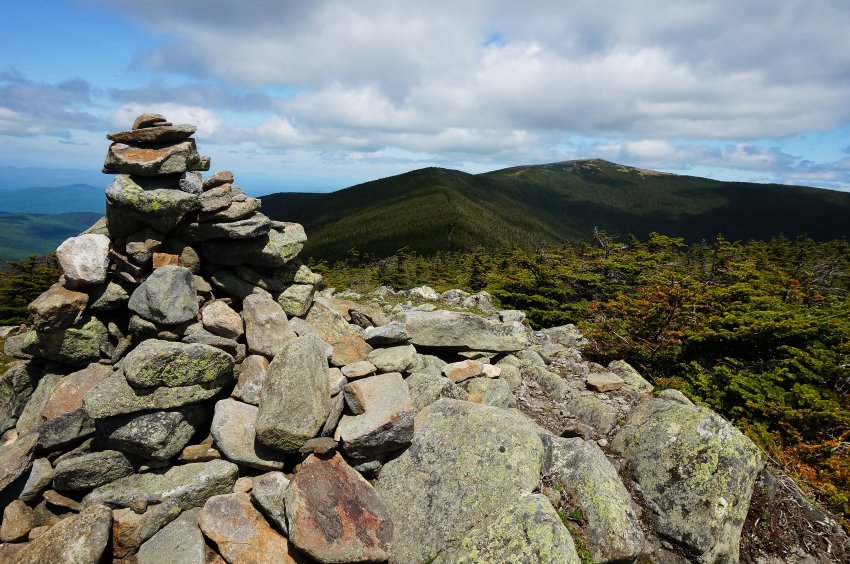 Another view of Moosilauke from the South Peak. 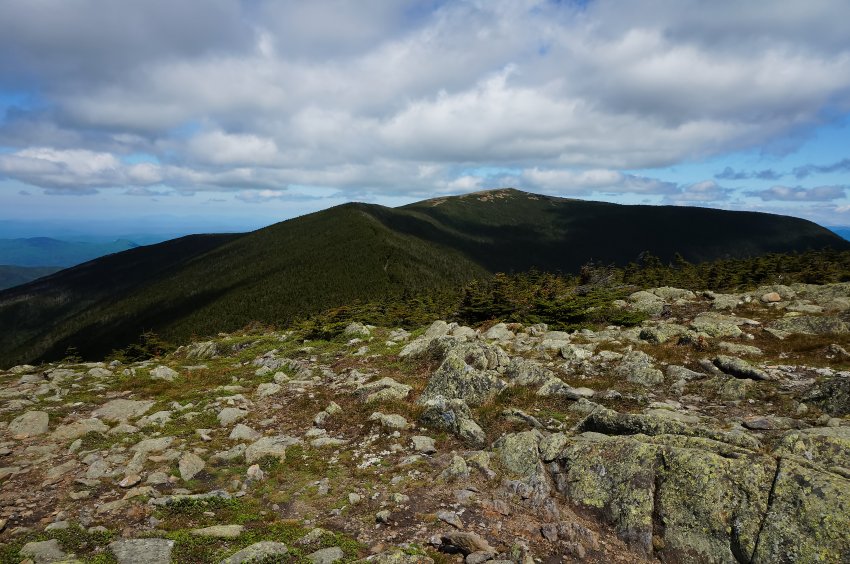 The carriage road back was an easy descent on a wide and rocky, but pretty, path. 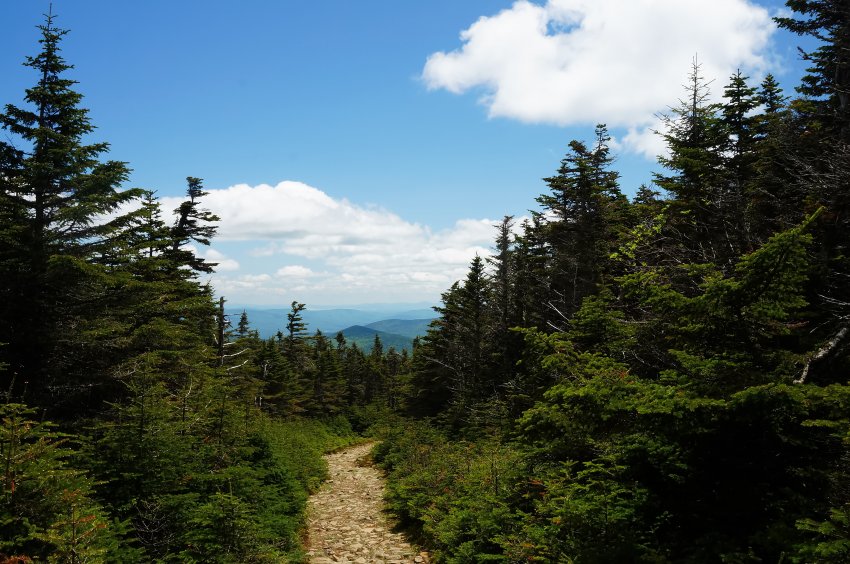 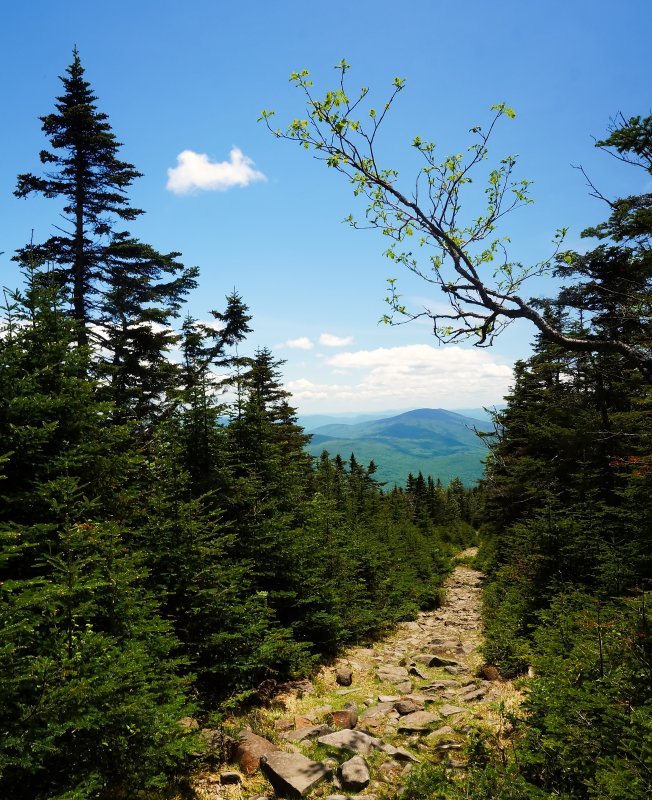 This trip wasn't what I had planned on doing, but when the weather is bad, it sometimes works to just pick another direction and do something else on your list. I'll make it to the Blue Ridge Mountains eventually.
Last edited: Jun 2, 2015
You must log in or register to reply here.
Similar threads