Not sure if this should be backpackacking or hiking... I'll go with backpacking as that's the way I did the trip!

Last weekend was time for another "Beyond Utah" hike. It was a fairly short jaunt up to Mount Langley -- a 14er in the southern Sierras. It's a relatively easy summit near Mt. Whitney and I made the trip even easier with a base camp at a lake half way up the mountain. It could be done as a LONG day hike, but I wouldn't recommend it. I really didn't need to spend the second night at the base camp though, but it was fun. It was amazing how much less snow there was compared my trip through the similar area last year LATER in the season.

A few logistic notes:
- the ultra-creative Cottonwood Lake names of 1 through 5 differ on various sets of maps.
- the "boulder" route to the top isn't that bad, but some may not like it. The longer "left" route is pretty much a walk up.

After freezing for two nights in my "desert" bag at 11,000 feet, I went to Death Valley where it was 117 degrees. No substantial hiking or video footage of that!

OK -- below is the video for the hike. 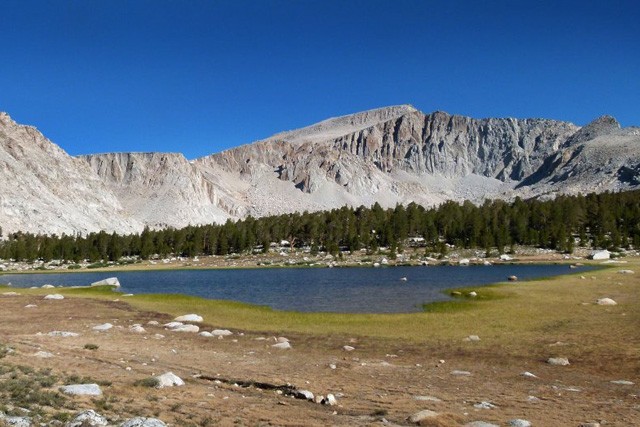 Nice! Looks like one hell of a view up there. I know nothing about Mt Whitney other than it being the tallest peak in the continental U.S. so it was pretty surprising to me to see all those people and a building on top! I think you picked the right peak between the two...
IG: @backcountrypost

Whitney is The Wave of California... x10 for the amount of people. You have to sign up for the lottery to get a reserved permit in February for the July/August/September season. There are walk-ins available, but those go the day before your hike and a few hundred people can line up to grab the few remaining spots. You have to poop in a bag. 90% of the people take the same route making it VERY crowded.

BUT... like the Wave, it's also VERY amazing which is why it gets the attention (well, that and the height record.)

Mount Langeley isn't as cool of a hike -- but still pretty darn cool. (Coyote Buttes South maybe?) BUT... the fact I had the summit 100% to myself made up for it! This probably would not have been the case on a weekend however.

Cool! That's neat that you were able to zoom in to see people on top of Whitney. I also like how you included the perspective looking down at Lone Pine from the peak, and looking up at the peak from Lone Pine. It really brings things full circle.:twothumbs:
http://www.lisakellyphotos.com/
You must log in or register to reply here.
Similar threads