We spent 3 days last week, truck camping and day hiking in the headwaters of the Highwood and Livingstone rivers, 2 hours drive to the southwest of home in Calgary. As we were based out of the Cataract Creek campground- the hike up to the long abandoned Cameron lookout atop Mount Burke was the logical choice for the middle day- the trailhead was a whole 2 minutes walk from our site. Pictured below is an image from the previous day's hike in the Windy Peak hills, with the dark triangle of Mount Burke poking up in the distance at left. 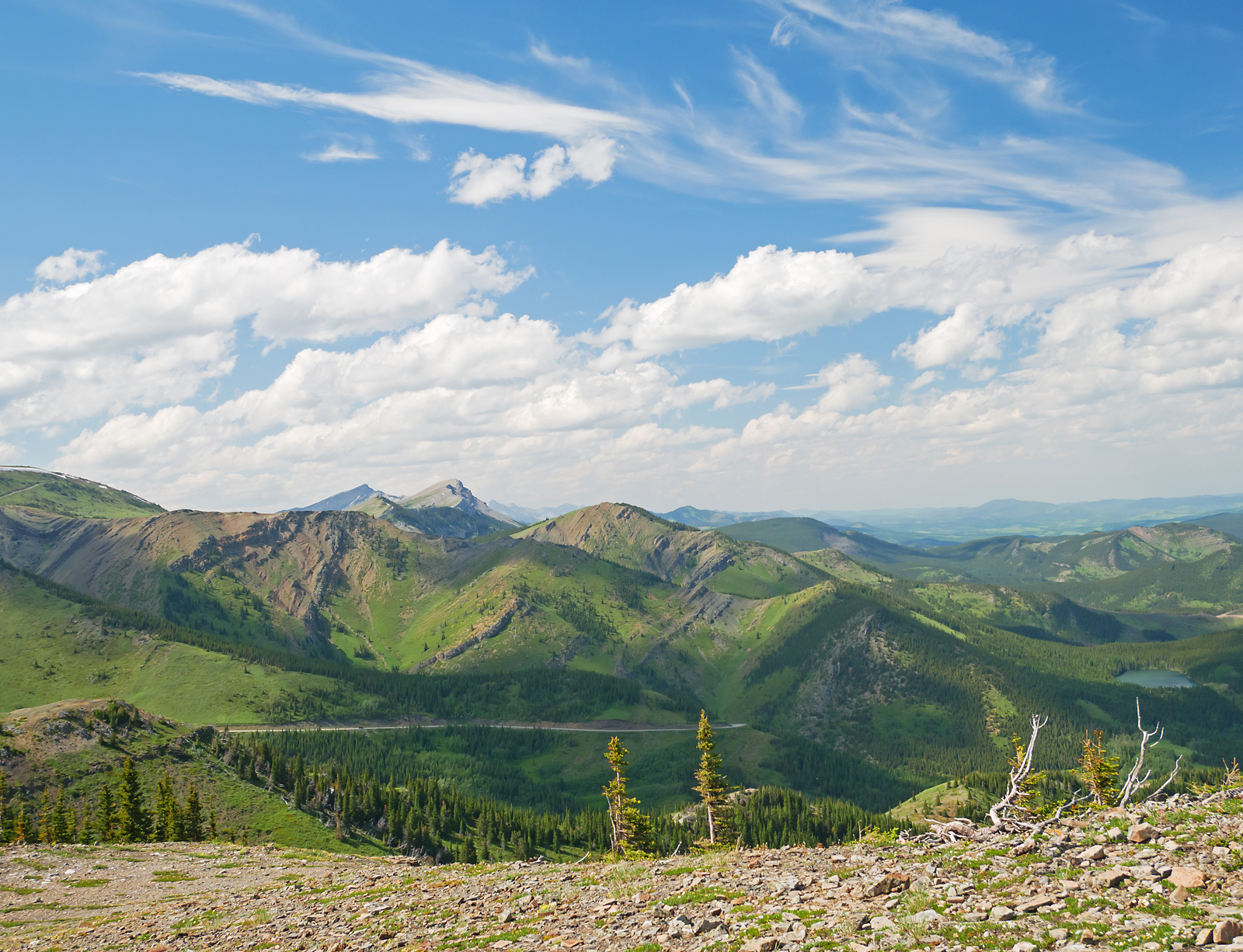 You can see why it was chosen for it's prominence when the lookout was built in 1929. 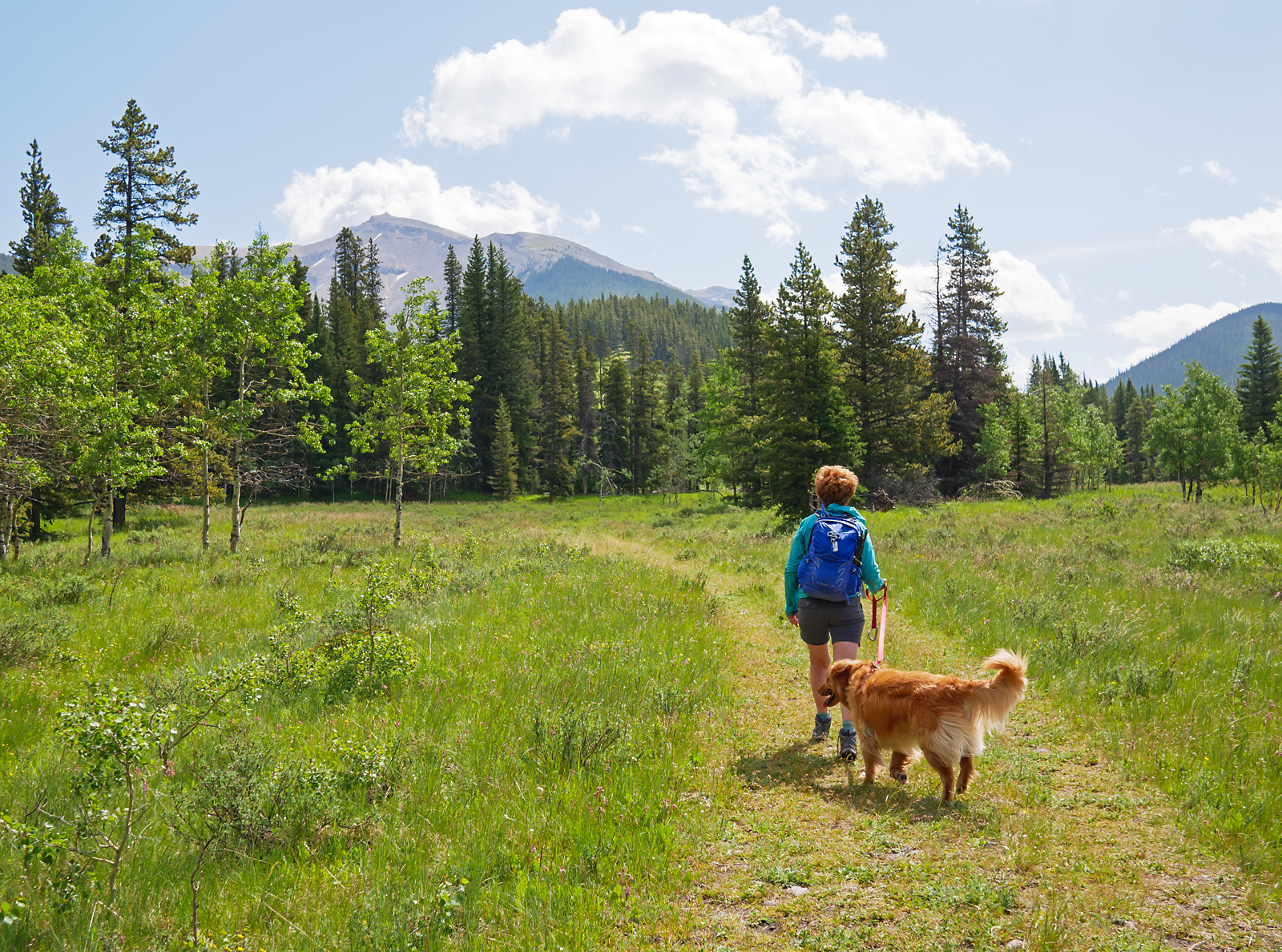 A few minutes of flat meadow walking after a crack of 11 start, before the trail heads into forest and tilts upwards, eventually popping out at treeline on the treed triangle at centre. Then the skyline ridge is followed, more or less, to the pimple that holds the lookout, 900 vertical metres above the trailhead. 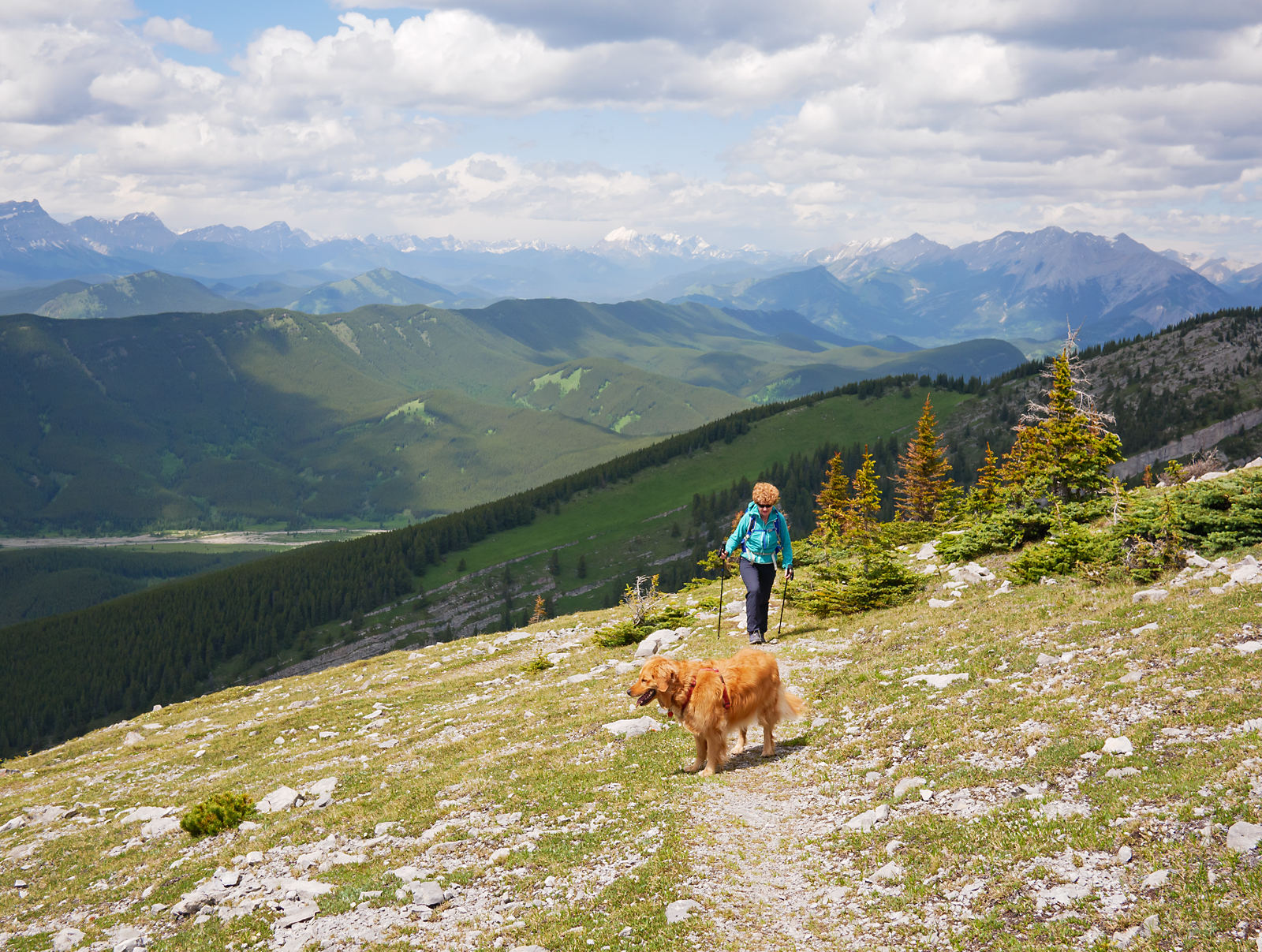 Thankfully into the alpine, with much of our elevation gain done via a relentless steep grind up a seismic cutline, and then the pleasant switchbacks of the original horse trail that was built to supply the lookout. You might wonder- why endure the cutline, and not take the whole of the gentler pack trail? The answer is that the initial 2 km valley bottom approach to the historic horse trail was totally destroyed in the 2013 floods, and despite volunteer efforts to re-establish the original route, the cutline has become the main route, with a good beaten in track as the hike is quite popular. 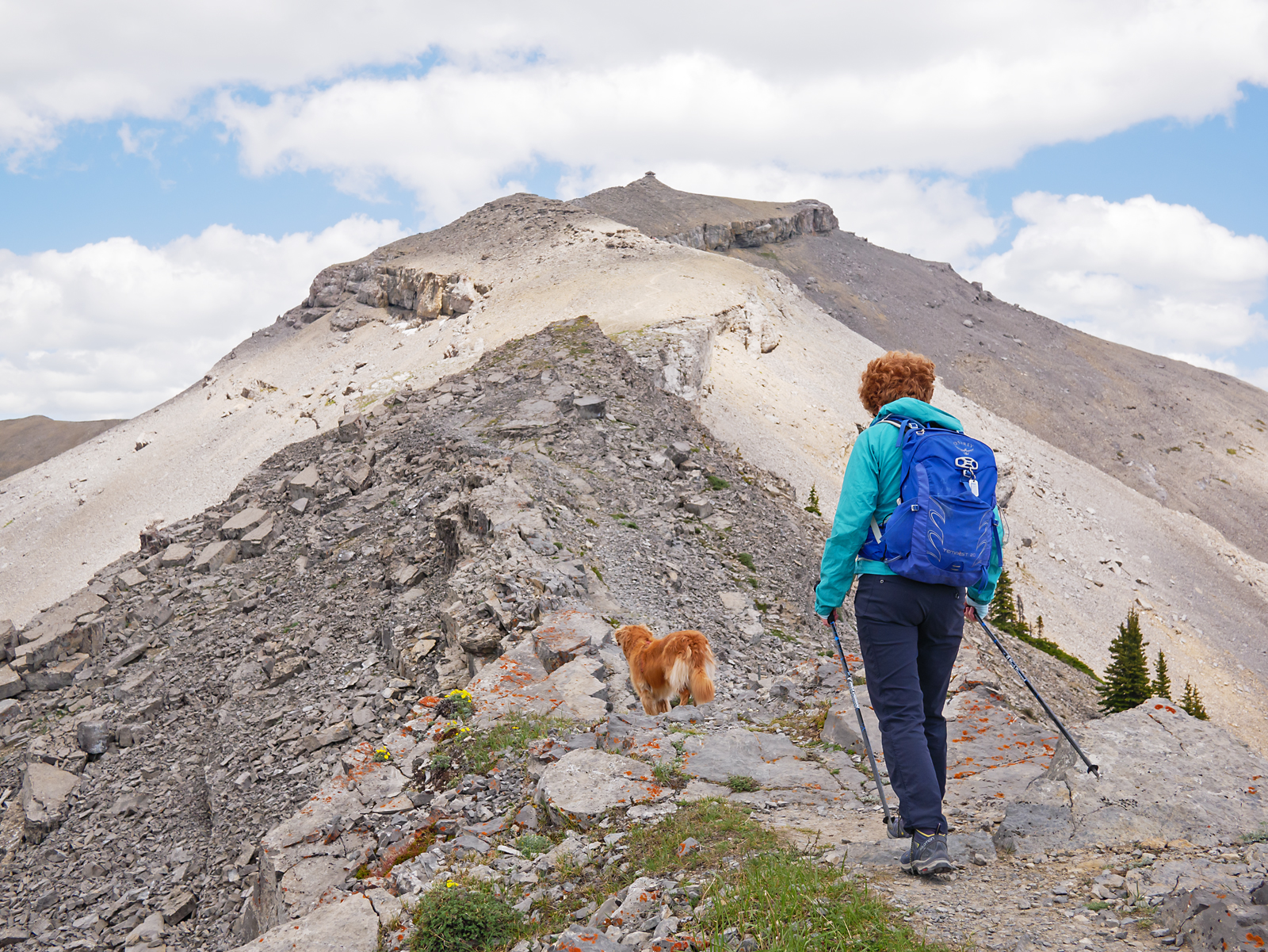 The lookout finally comes into view again along the narrow ridge section, where nervous pack horses were once blinkered and led across one at a time.
Still a ways to go- but not as far as it might look- the lookout is really not very big! 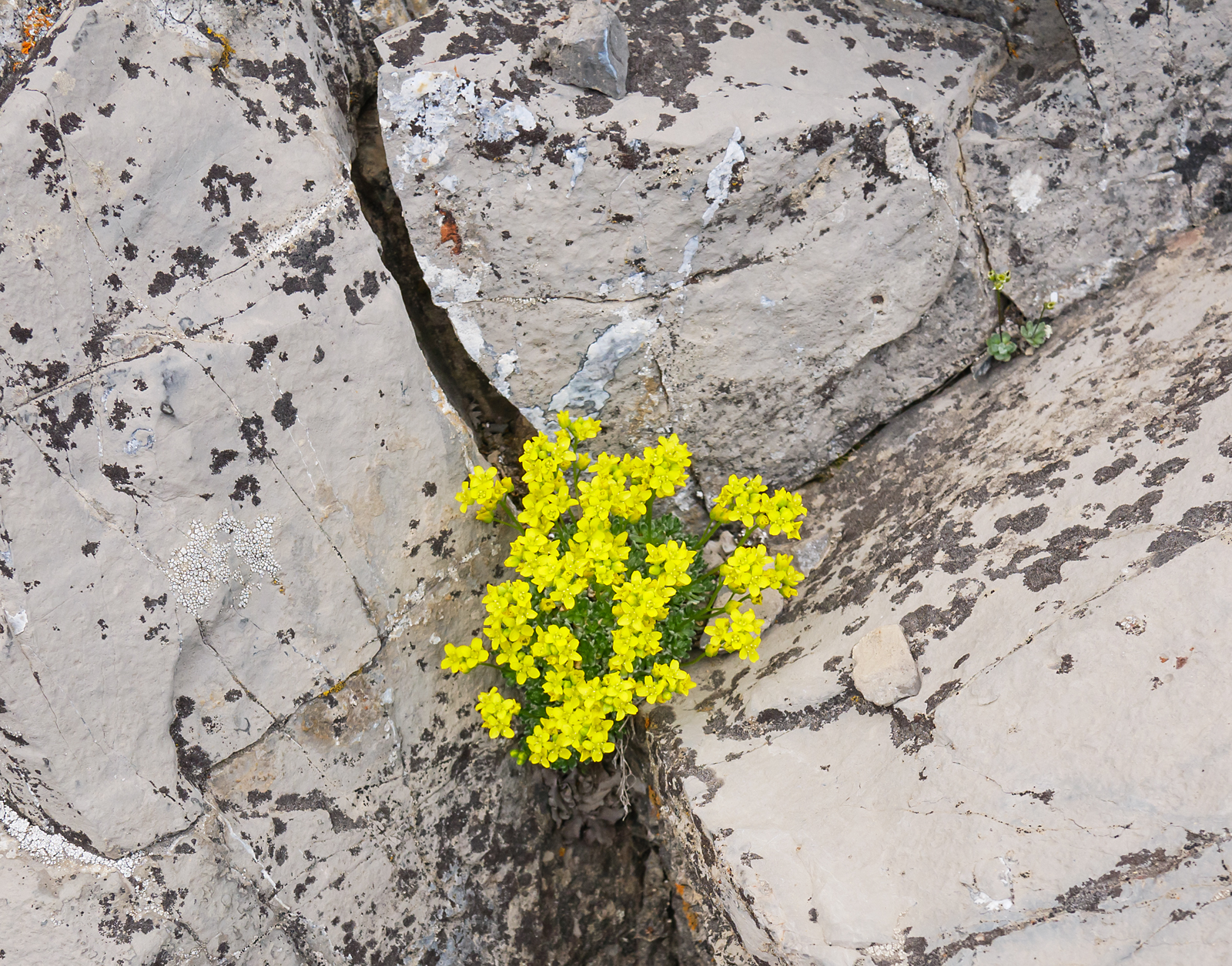 Yellow Draba hiding in the rocks from the winds, which were a bit breezy on this day, but tolerable. 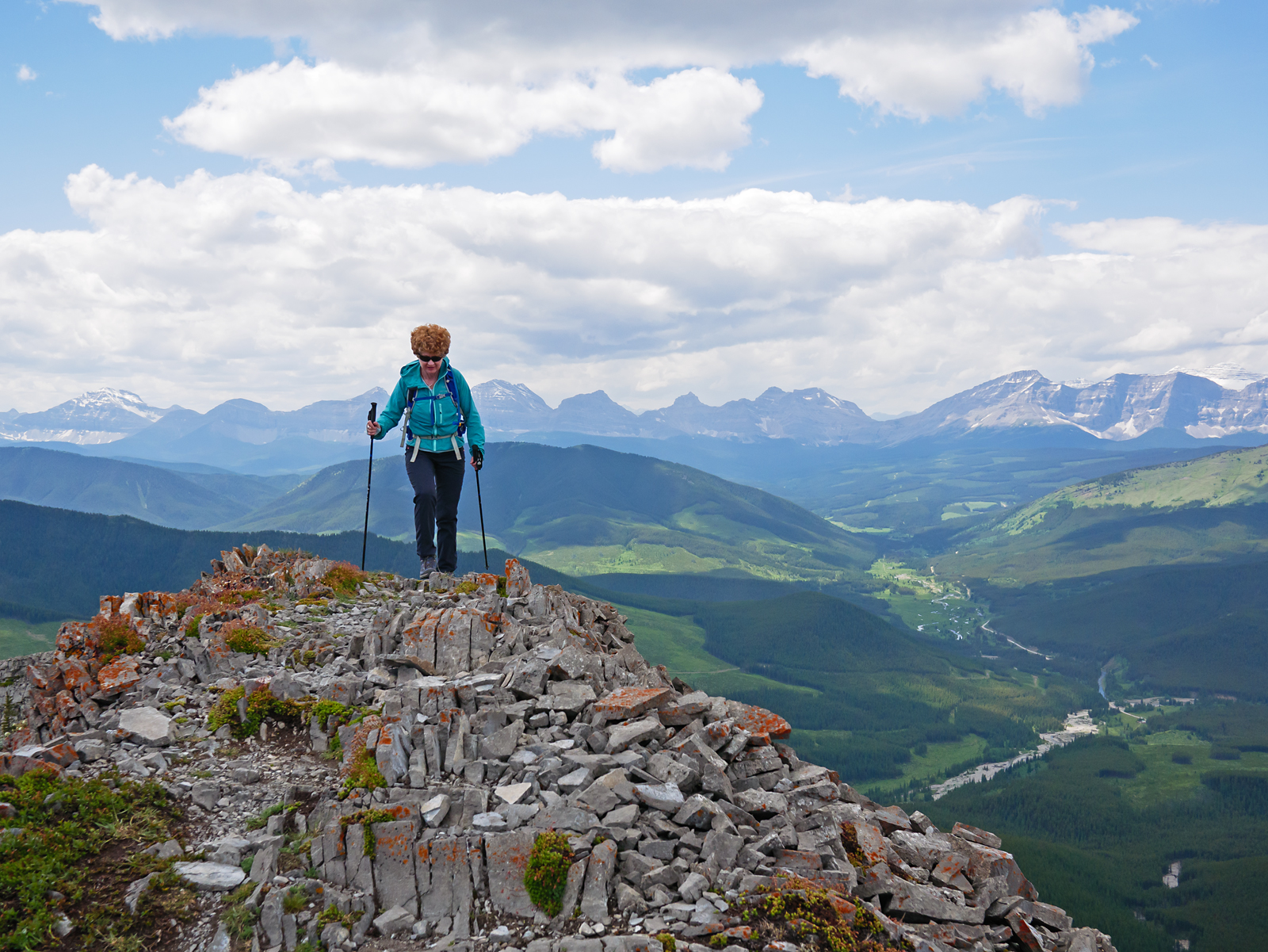 Along the ridge crest. Behind- the peaks of the Alberta-BC border, and the continental divide. Below in the right corner- the campground and trailhead. 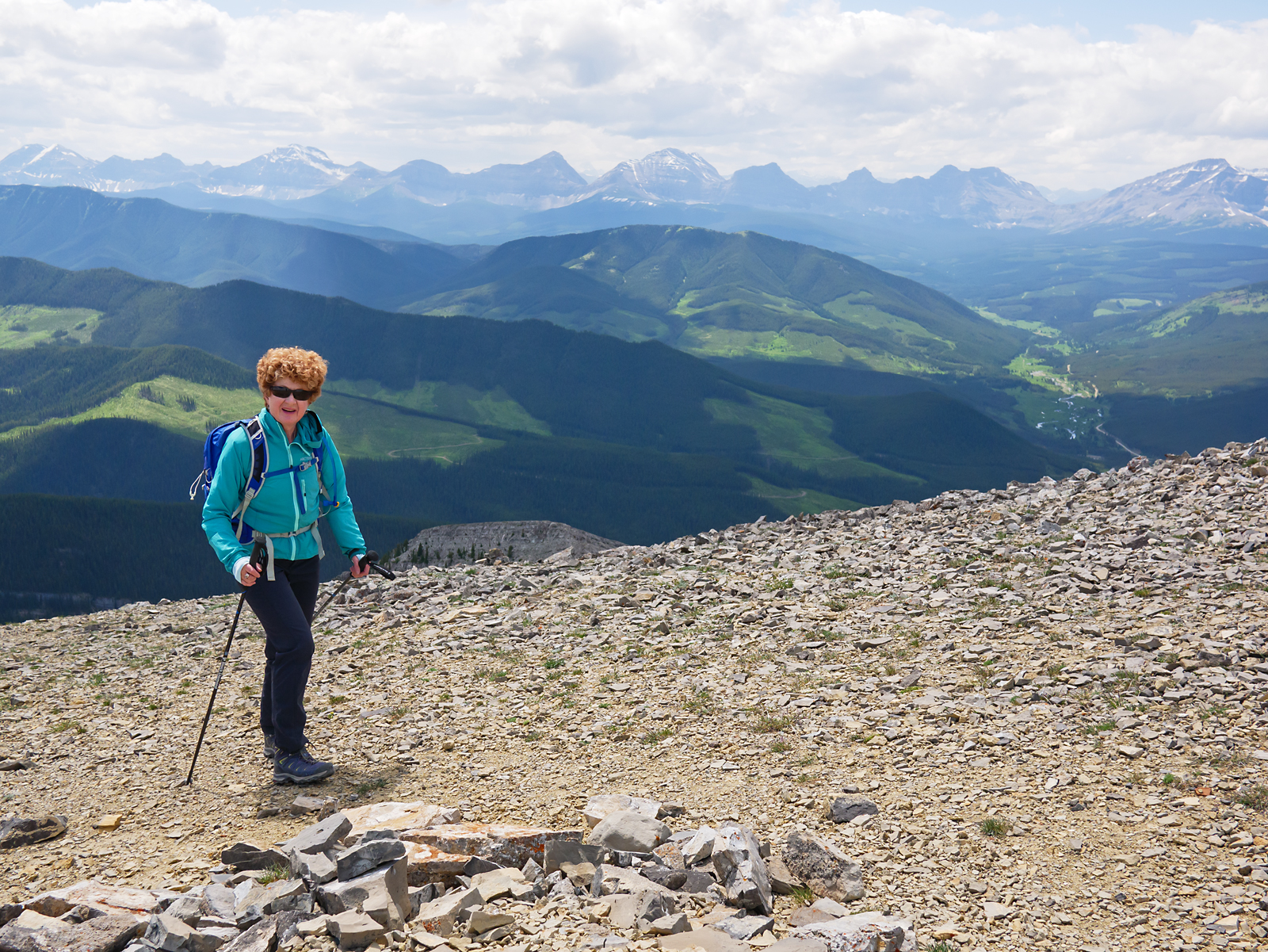 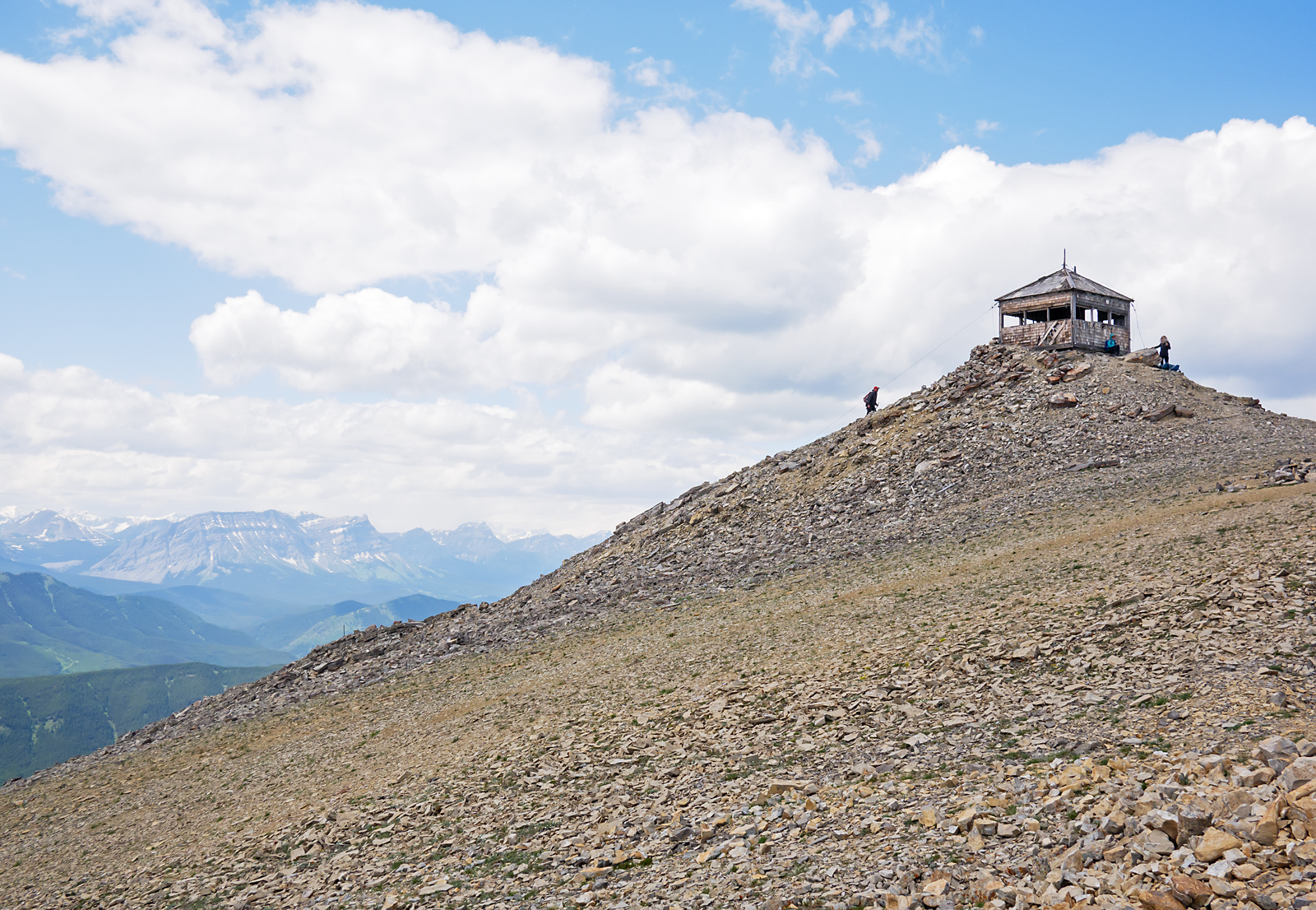 We shared our time up top with a younger couple, who told us that we were an inspiration for being there at "our age". I'm not sure how I feel about that! 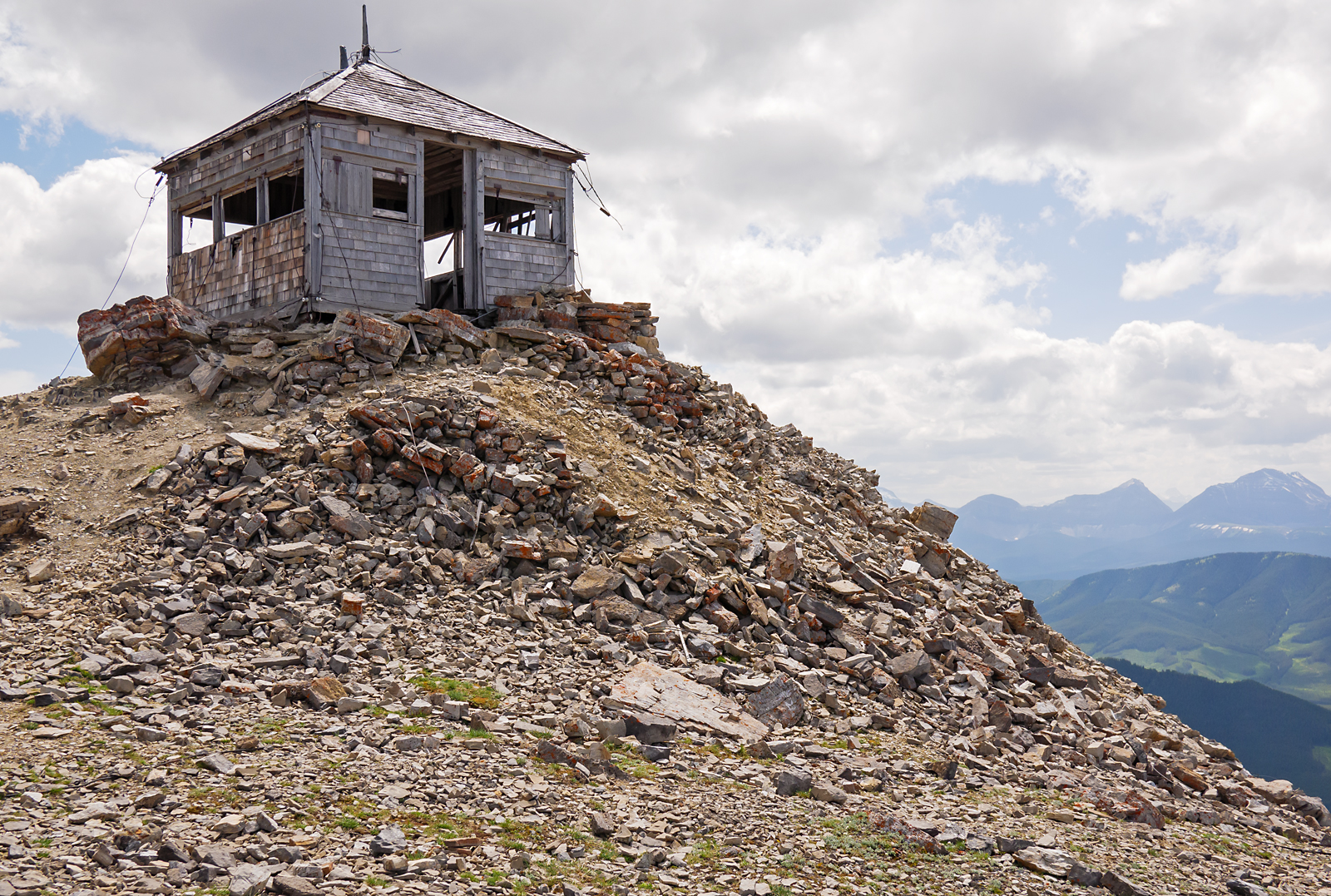 Dilapidated, but still standing after over 90 years. The lookout was abandoned in the early 50's, in favour of a lower ridge to the west that could be supplied via a road.
It's too bad that this piece of Alberta history is being let go, although the oil burning stove and some of the furnishings reside in a museum. 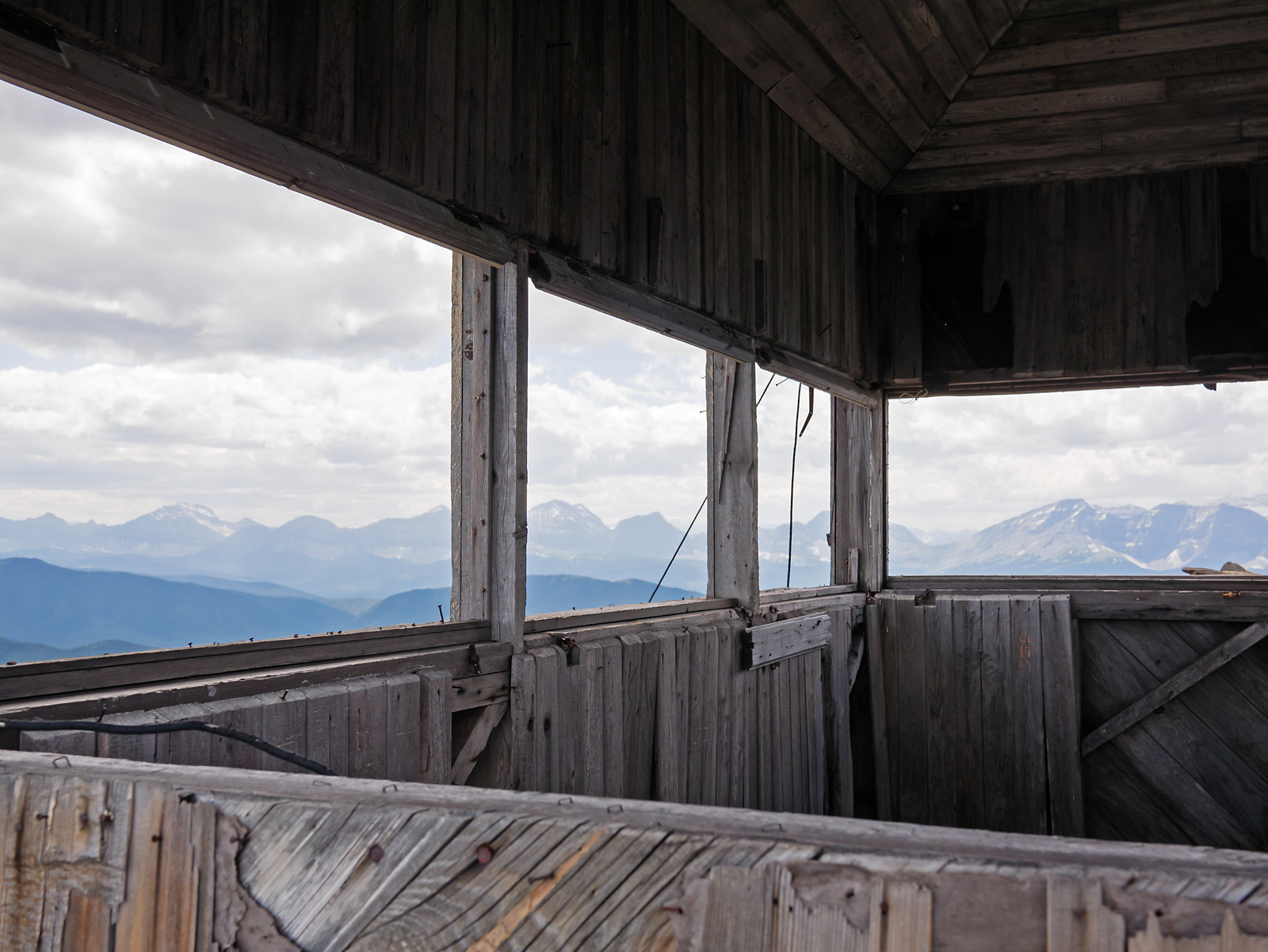 At 12 x 16 feet- it's wasn't a big home for the fire season. Great views though, but I can only imagine what it must have been like during a thunderstorm, which are common in summer here. 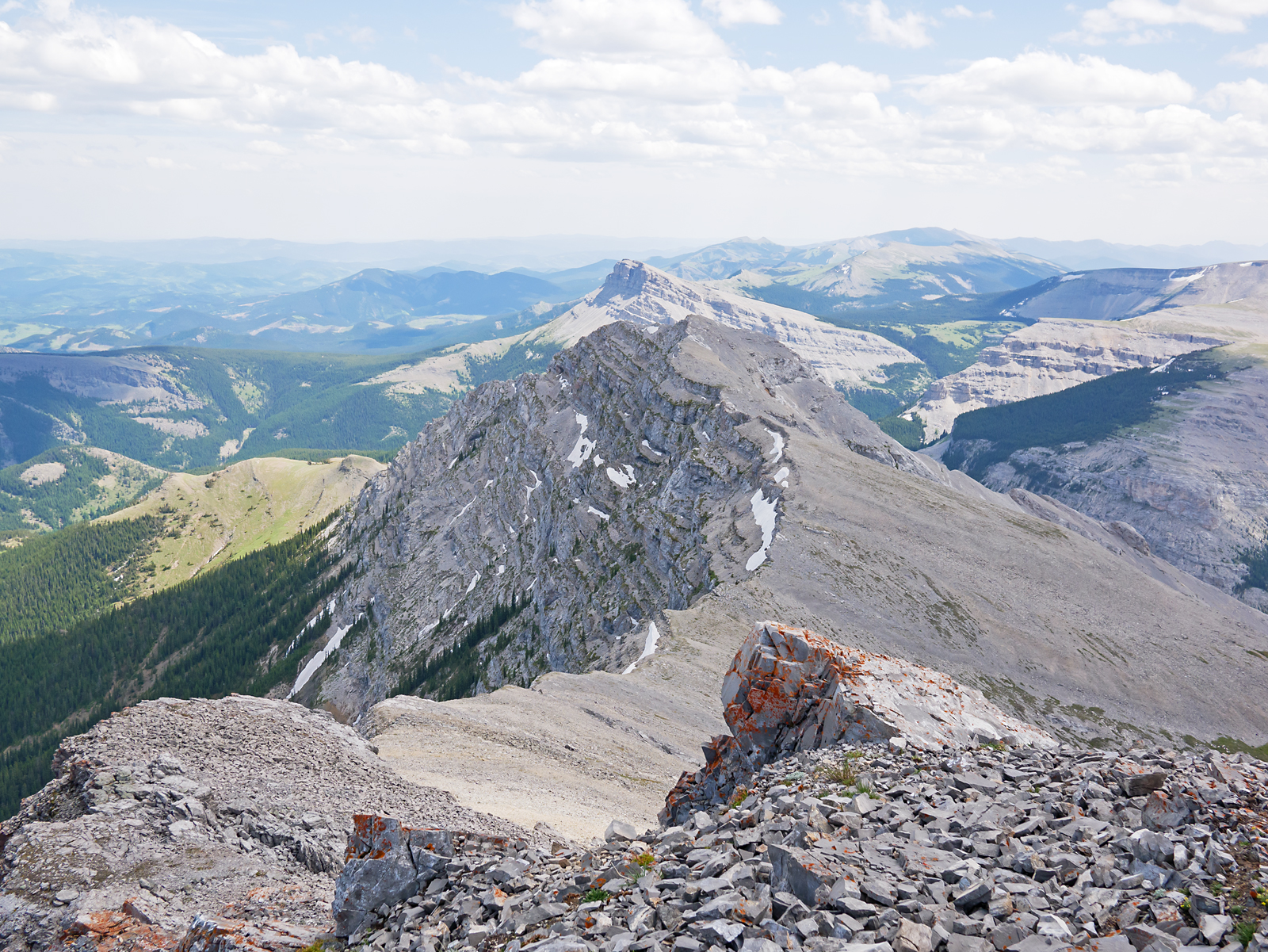 Looking down the escarpment of the SE ridge, where the lookout person would collect water with buckets suspended on the cliffs to catch seepage. 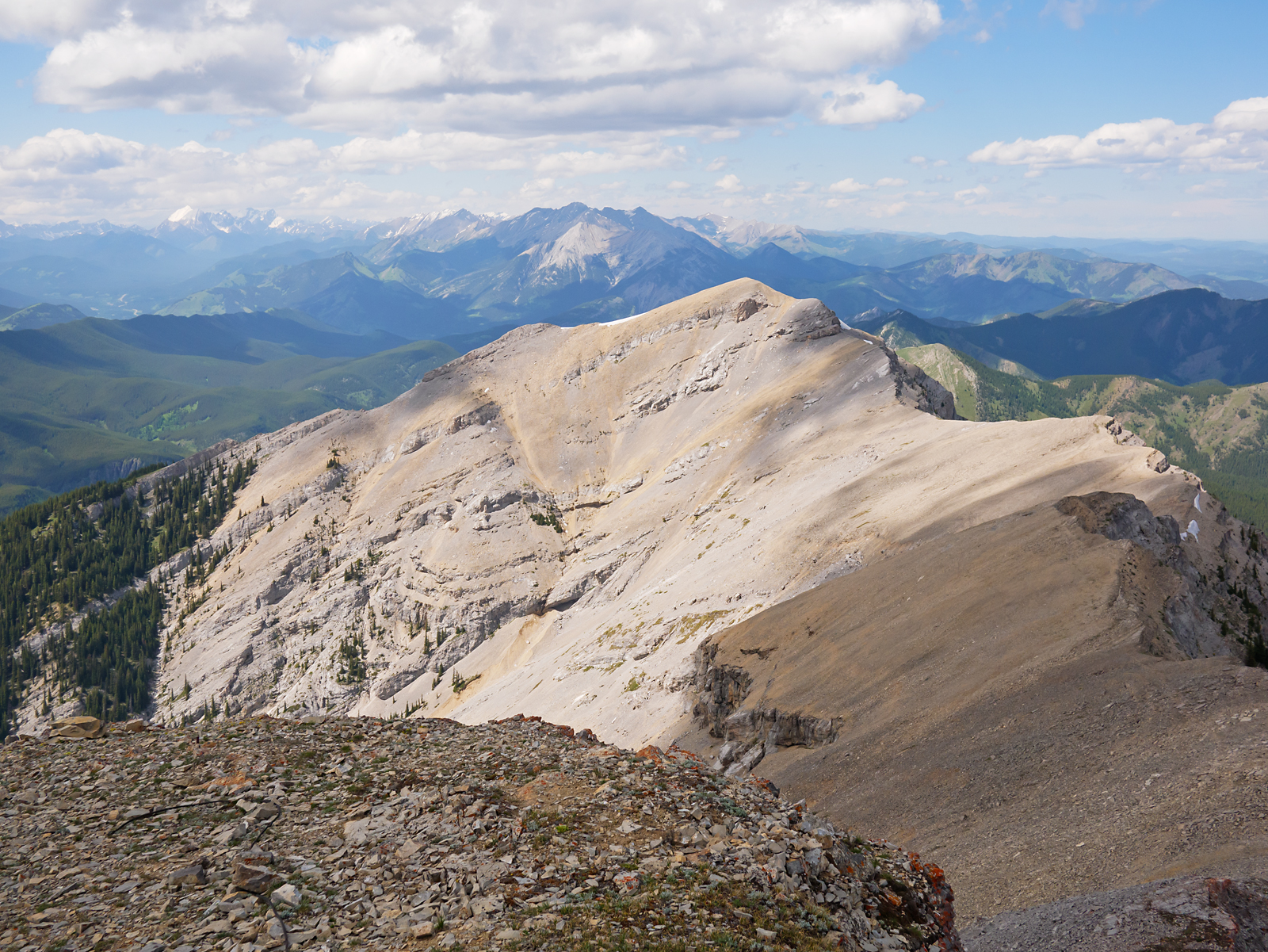 Mount Burke north summit, with a still snowy Mist Mountain and the upper Highwood valley in the distance. The connecting ridge looks easy, but a bit of a scramble is required at both ends to connect the two summits. 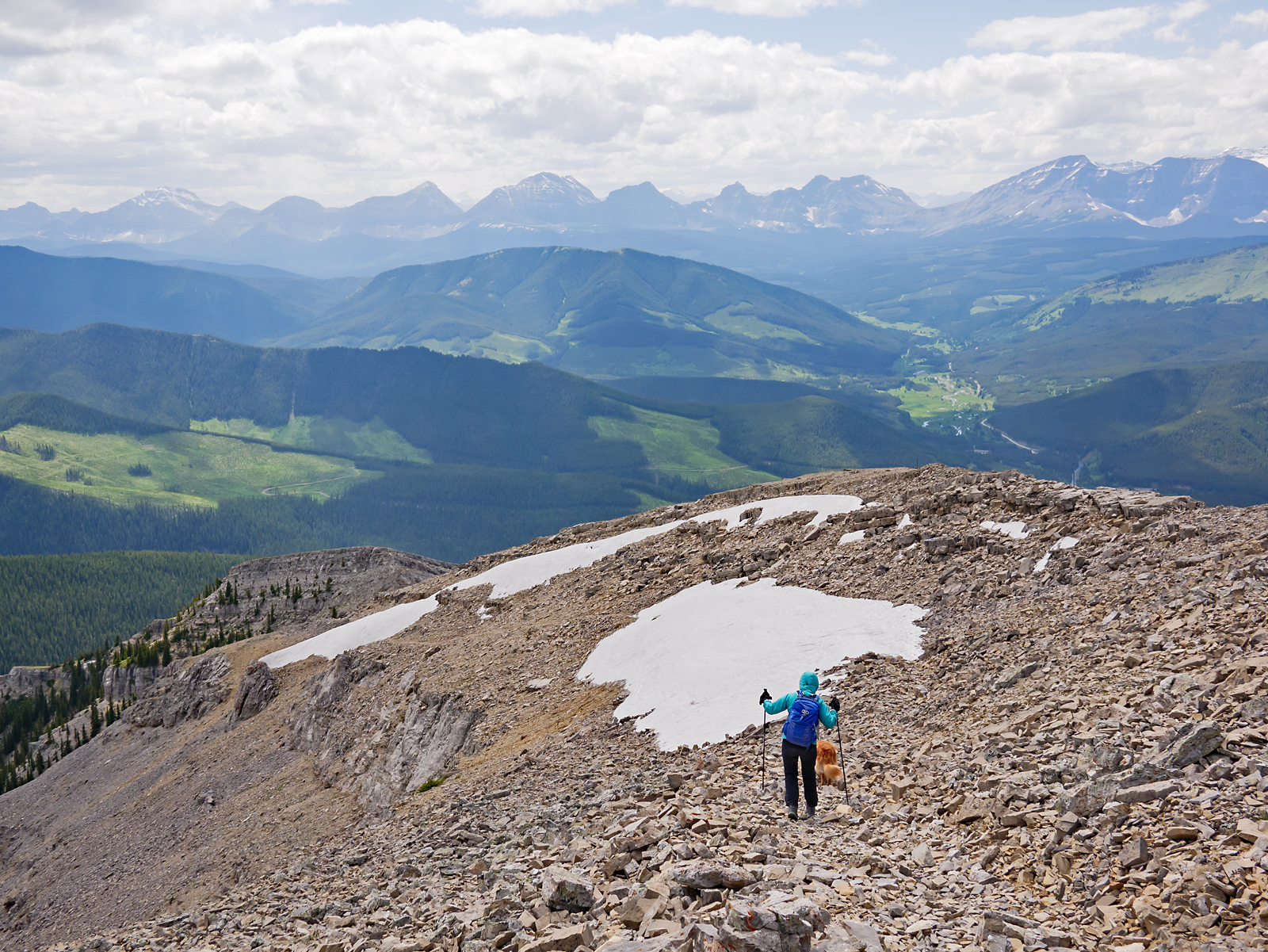 Into the descent after lingering for a while over tea and identifying the plethora of peaks. 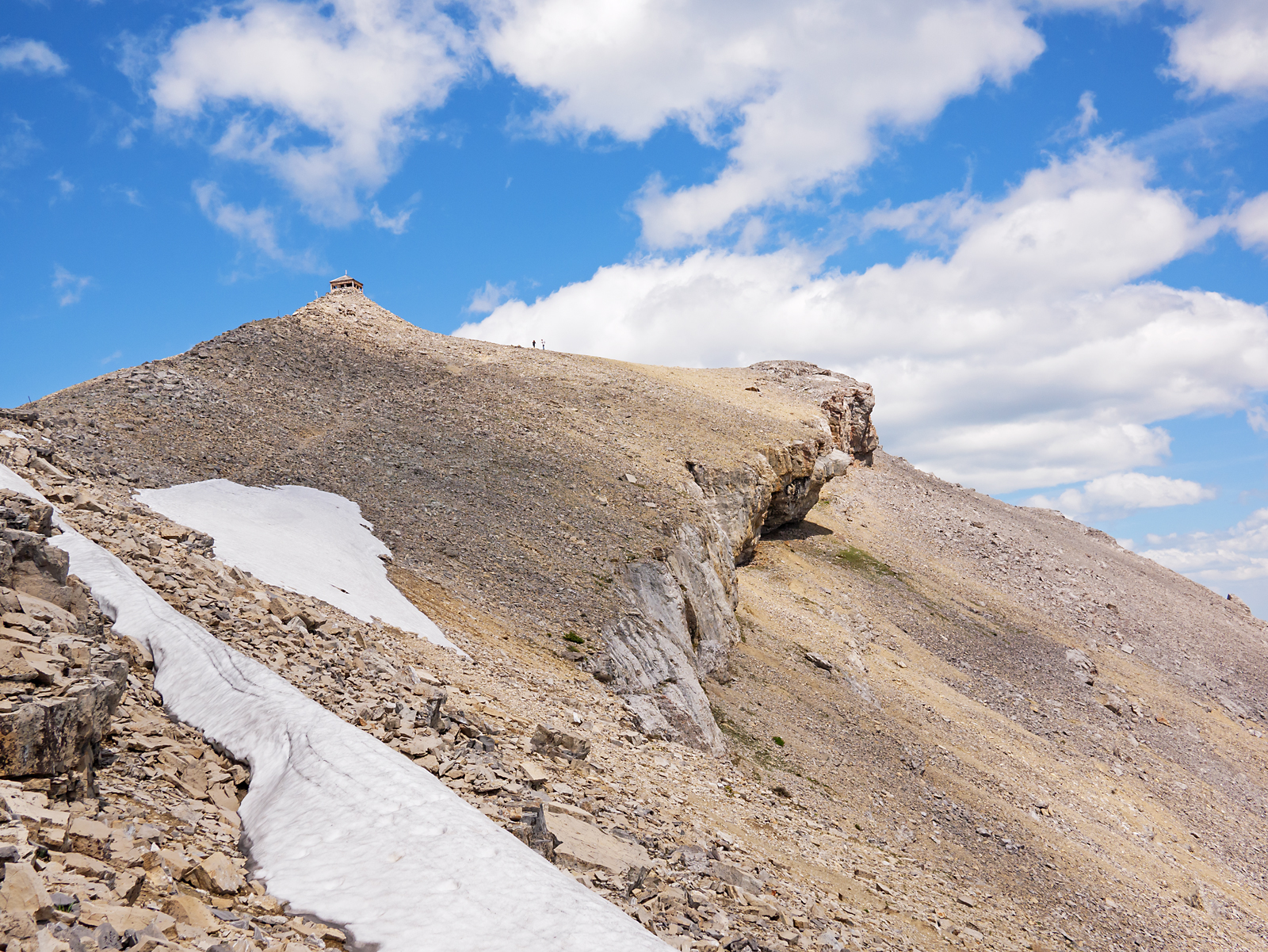 A look back at the final ascent. If you look carefully along the lefthand ridge- you can see the steel poles that once supported a telephone line- the lookout's only means of outside communication in the 30's to the Highwood ranger station 20 km away. Remnants of the wire can still be seen along the trail. 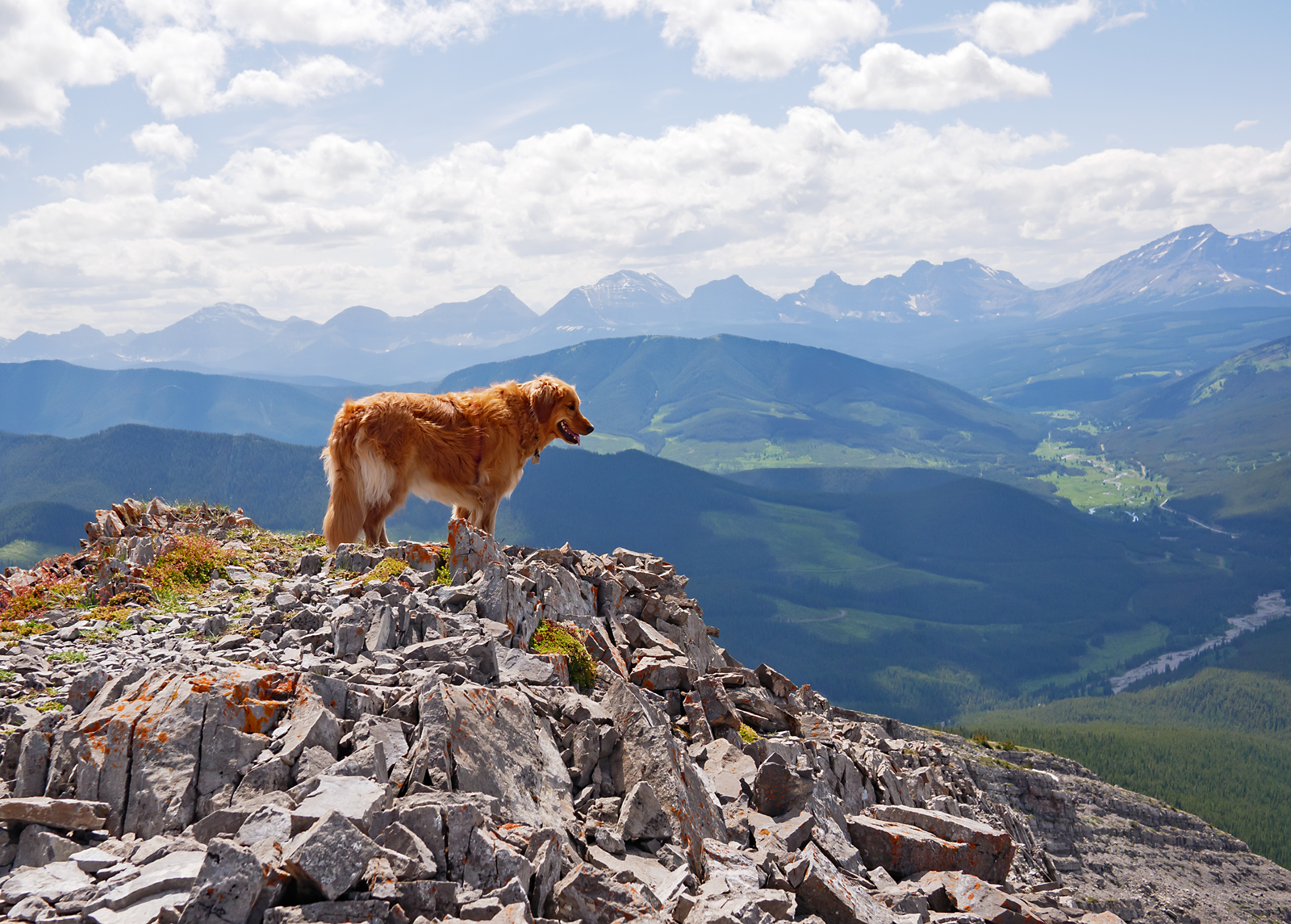 Piper, taking in the views, or more likely just trying to spot the squeaking Pika's. 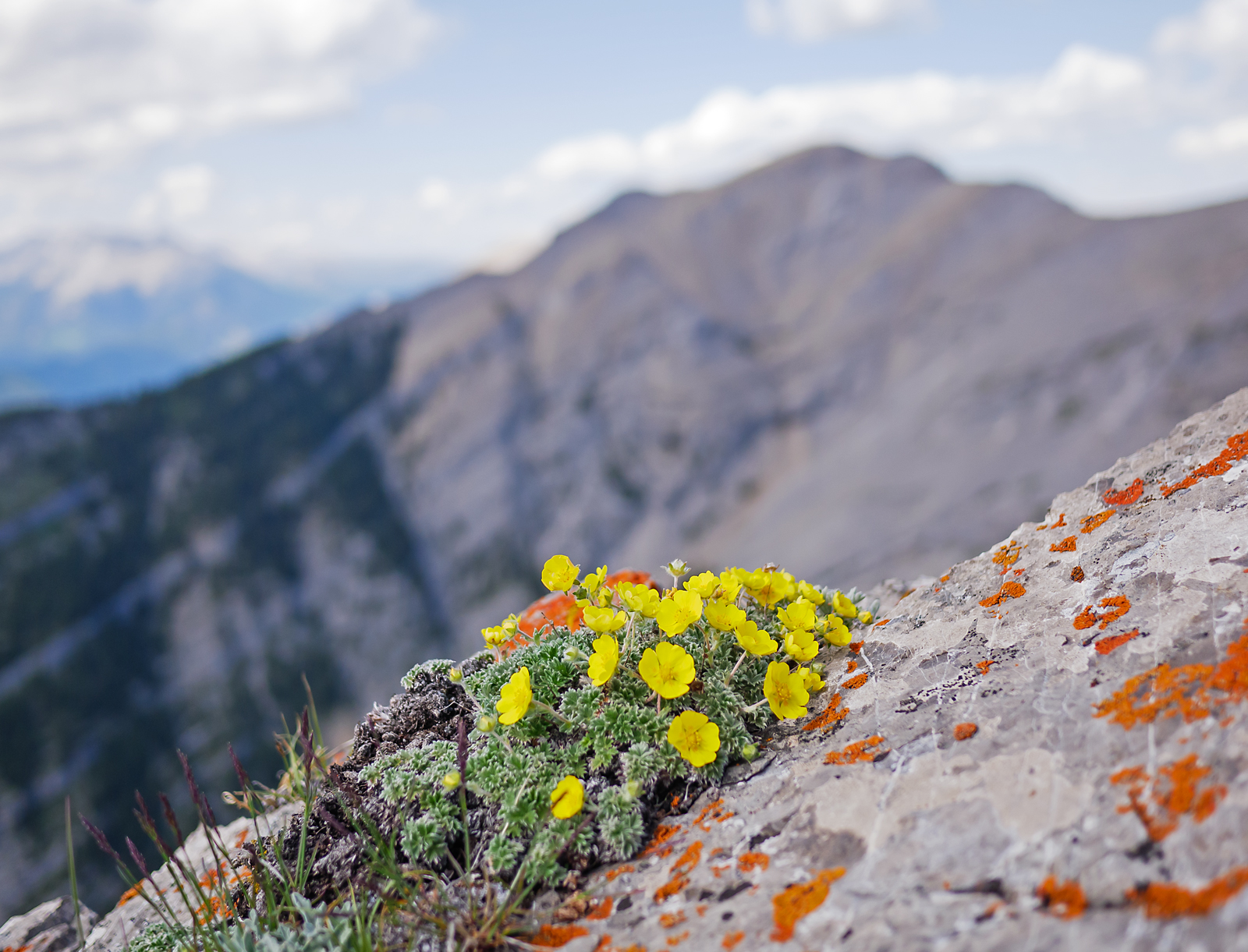 Cinquefoil, and the north summit.

Calming winds, warmer afternoon temps, and an inviting pocket of meadow- led to another break before dropping into the trees. Not much to report about the walk down- just one foot in front of the other through forest and scattered wildflowers, back to happy hour at the campground. So nice to do that rather than have to drive home!
Epilogue:
With Jo waking up the next morning feeling a bit of knee pain from the relentless descent (maybe we ARE feeling our age!) we opted to take the scenic route home through Highwood Pass and do an easy hike close to the pass, rather than ascend another peak nearby the campground.

Peak Glacier Lily along the trail to Arethusa Cirque at Highwood Pass. 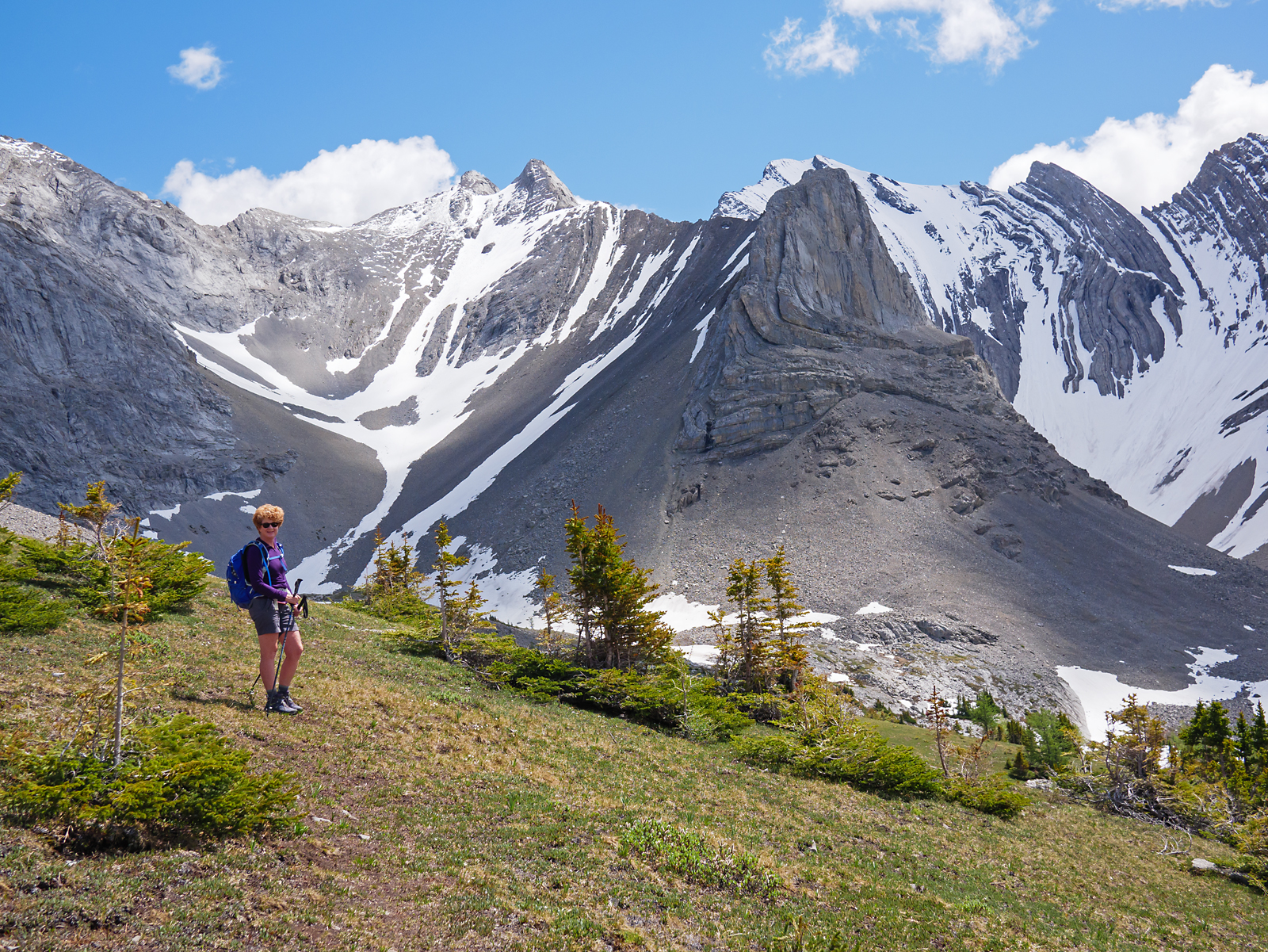 All smiles- the sun is out in a favourite place, and the knee is feeling better after an easy walk.
A great way to end our short camping trip!
Last edited: Jul 8, 2020
https://steveriggs.smugmug.com

Wow - gorgeous photos! Seeing the snow and your jackets made me envious, as we're in the midst of a heat wave here in Michigan!

Fantastic views, love it! Thanks for sharing.

I wish I lived closer to the Canadian Rockies, thanks for the great photos
My trip reports: backpackandbeer.blogspot.com

Stunning!!
You must log in or register to reply here.
Similar threads