After having done an afternoon reconnaissance hike on the Middle Fork Blacks Fork trail the weekend before I decided to do a bit more exploring in the drainage. Given there was snow still on most of the high passes I scoured the maps for an opportunity to gain some elevation with the hopes of getting above treeline and some great views. I happened to stumble onto a trail on the USFS 2016 map on caltopo.com labeled the Middle Fork Blacks Fork Ridge Way trail, TR026. It could provide a way to loop in a lollipop fashion with promise to get me above tree line for a time. Curiously I did not see this trail on the 2013 USFS map nor any other available on caltopo. This made me wonder if it were perhaps a newer trail.

Here is my route with the ridge route shown in blue. 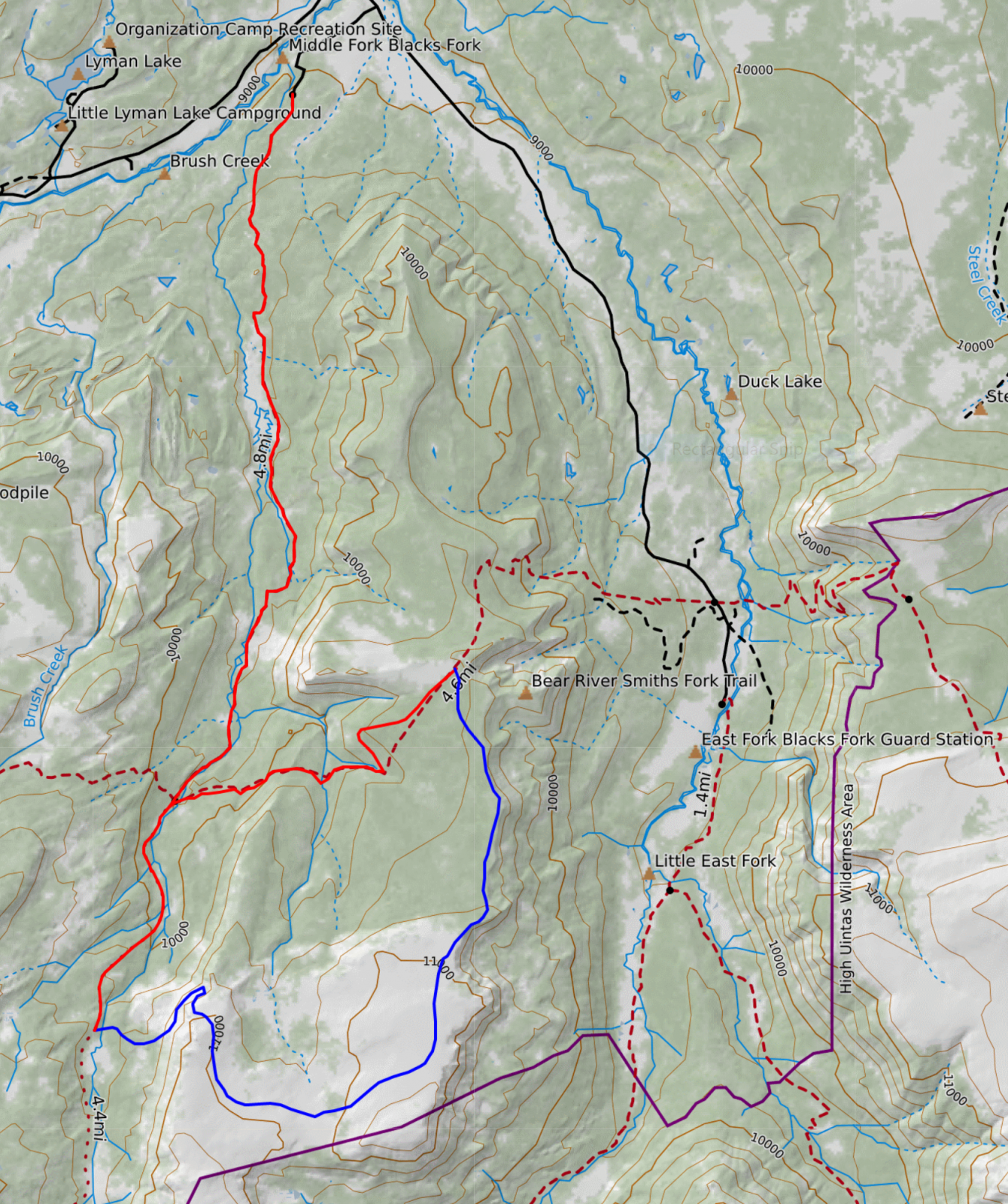 Here is the route shown in the 2016 USFS map. Looks official to me. 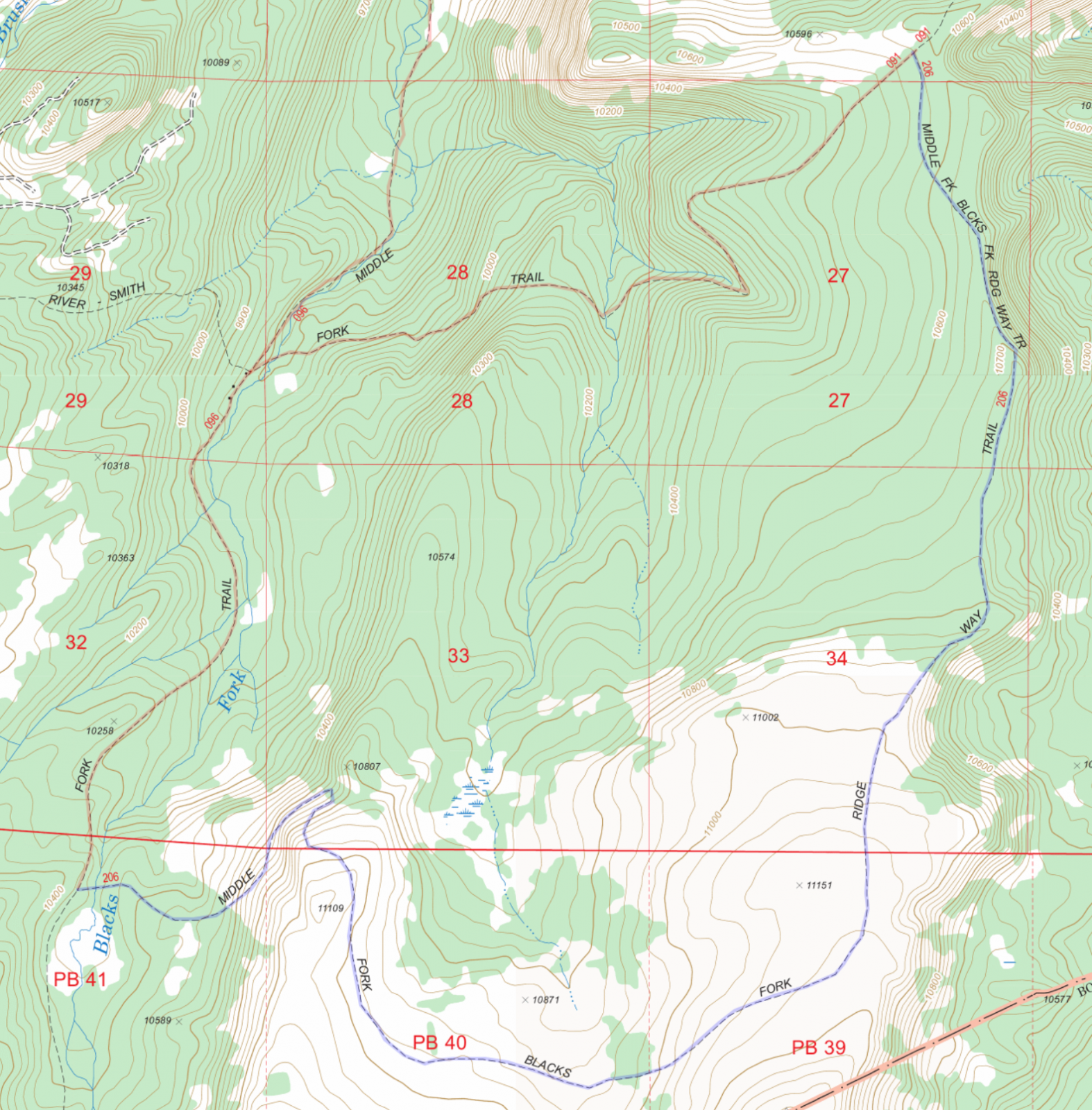 Armed with a route on my InReach I packed up for a day hike and headed to the trail head. I was on the trail at about 7:30 am.

Here is a video of the day if you would like to follow along with me. Otherwise read on.

The trail quickly leaves the trees and skirts the eastern side of a beautiful meadow. 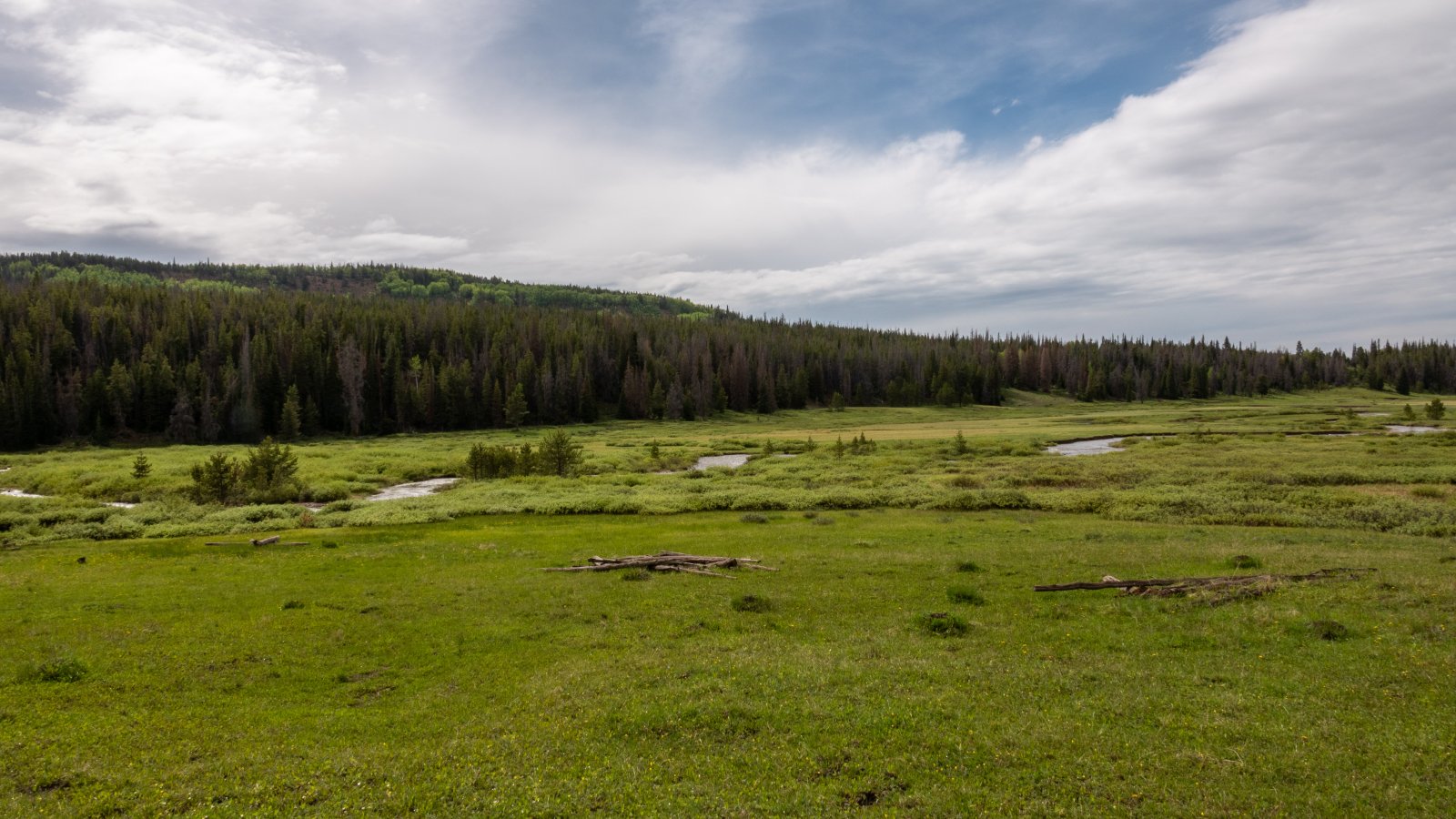 Just before leaving the meadow and re-entering the trees Mt Tokewanna comes into view. 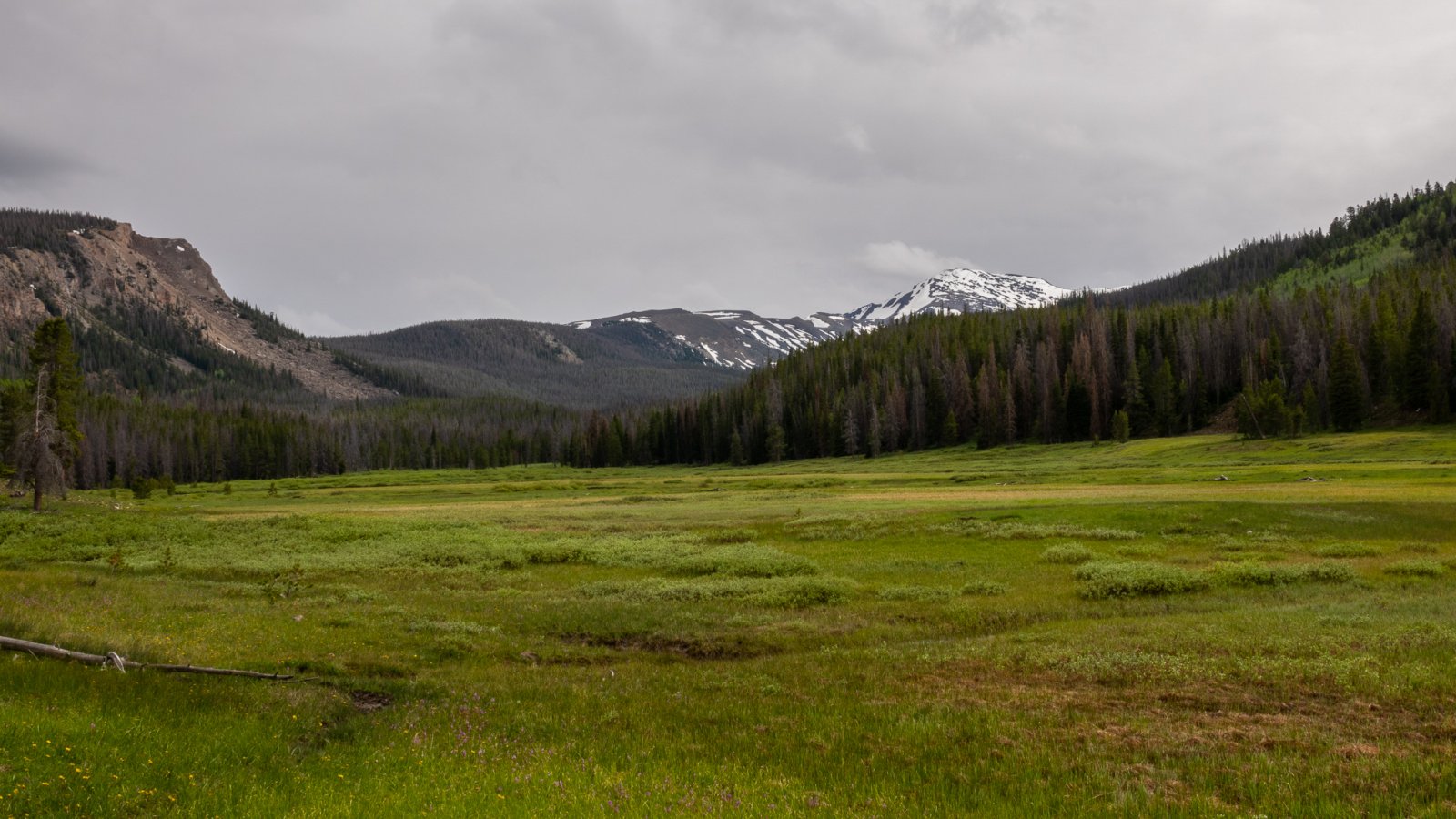 On the left side of the previous picture you can see evidence of a huge slide. The trail passes through the lower reaches of this slide path where many huge rocks are everywhere. Must have been quite the cataclysmic event when this all came down. 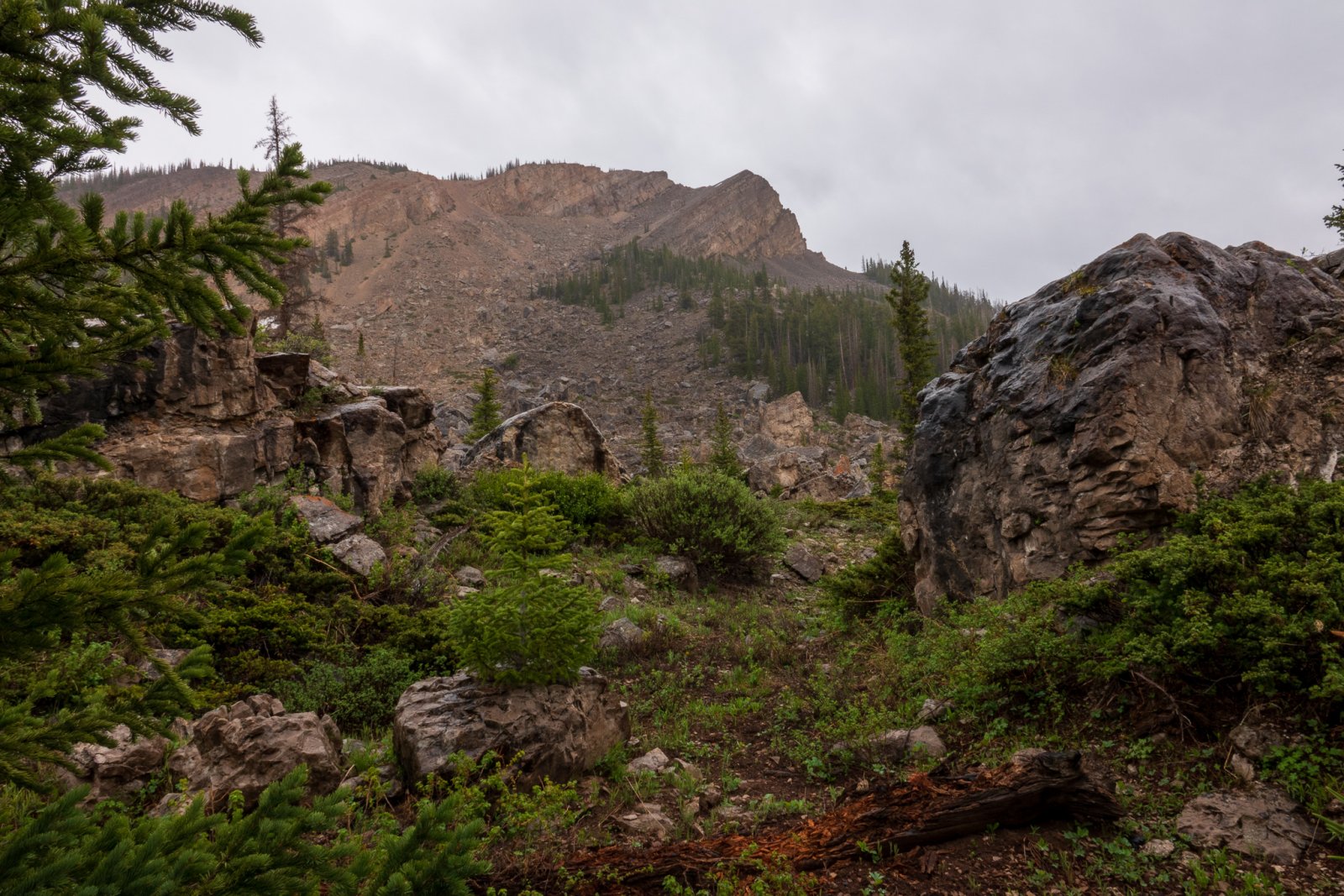 The main trail continues on to a river crossing, continuing on the west side until reaching the junction with the Bear River Smiths Fork trail. Taking a left turn at the junction brought me to cross the river once again. 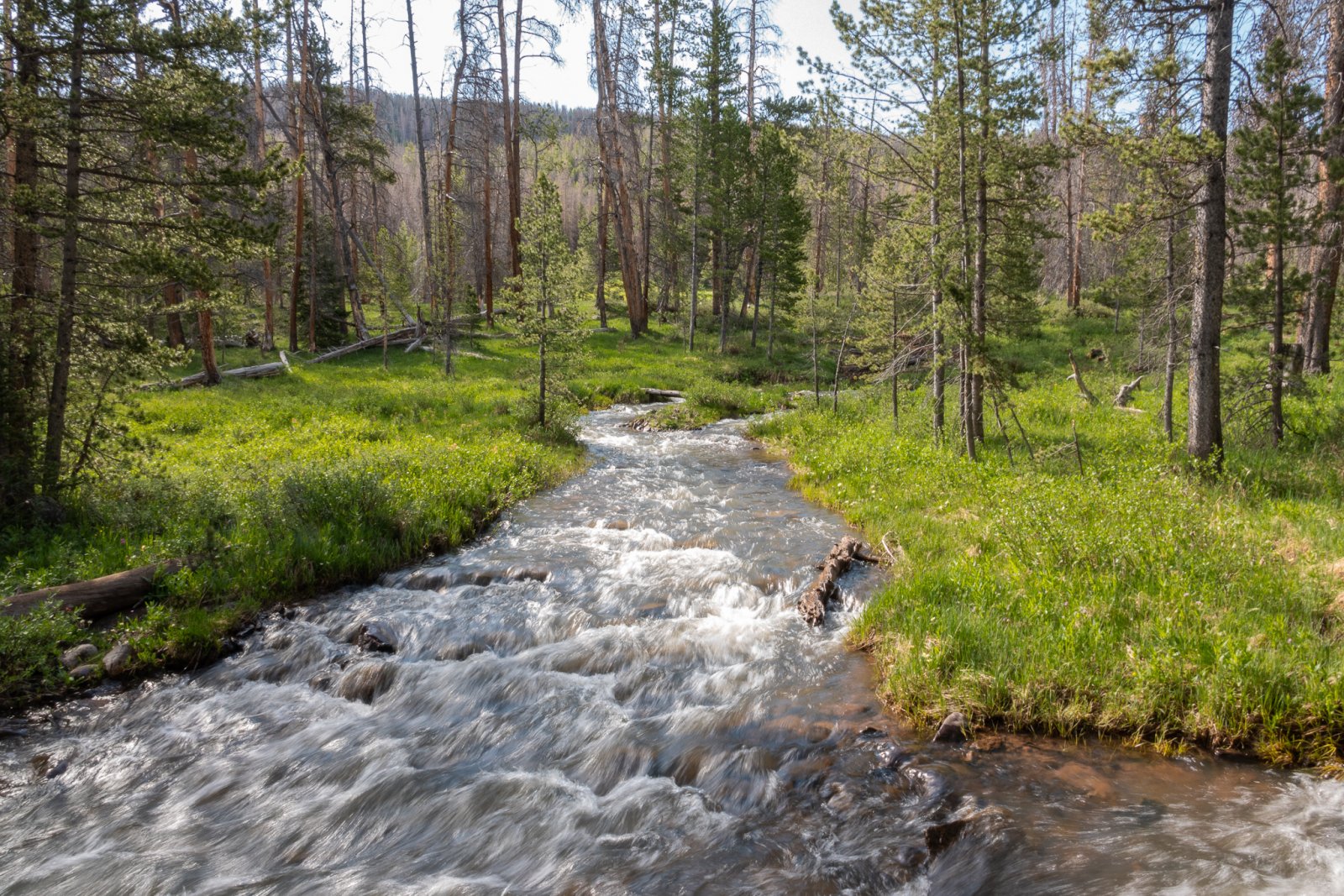 Now would begin a climb to the east ridge. So far the mosquitoes had not been too troublesome but the further I got away from the river bottom the worse they got. I finally had to relent and put on my bug head net to keep from being eaten alive. Sure I glad I picked one up at Walmart the day before.... would have been miserable without it.

According to the map I should cross the junction with the MFBF Ridge Way trail just before reaching the saddle. I arrived at the saddle at 10,600 ft but it was nowhere to be found. I searched up and down in the area a couple of times but could not find any sign of a trail heading to the south. I decided to just start following my route on my InReach hoping to eventually hook up with the trail.

The travel through the trees was challenging with all the downed trees. I tried zig-zagging along the route hoping to find some sign of the trail but never did. I eventually arrived at the ridge over looking the East Fork Blacks Fork drainage. Once there there seemed to be some signs of a trail following along the ridge but invariably they would fade to nothing. Perhaps they were just social trail. I continued to gain elevation with the trees beginning to thin out providing a wonderful view of the neighboring drainage. 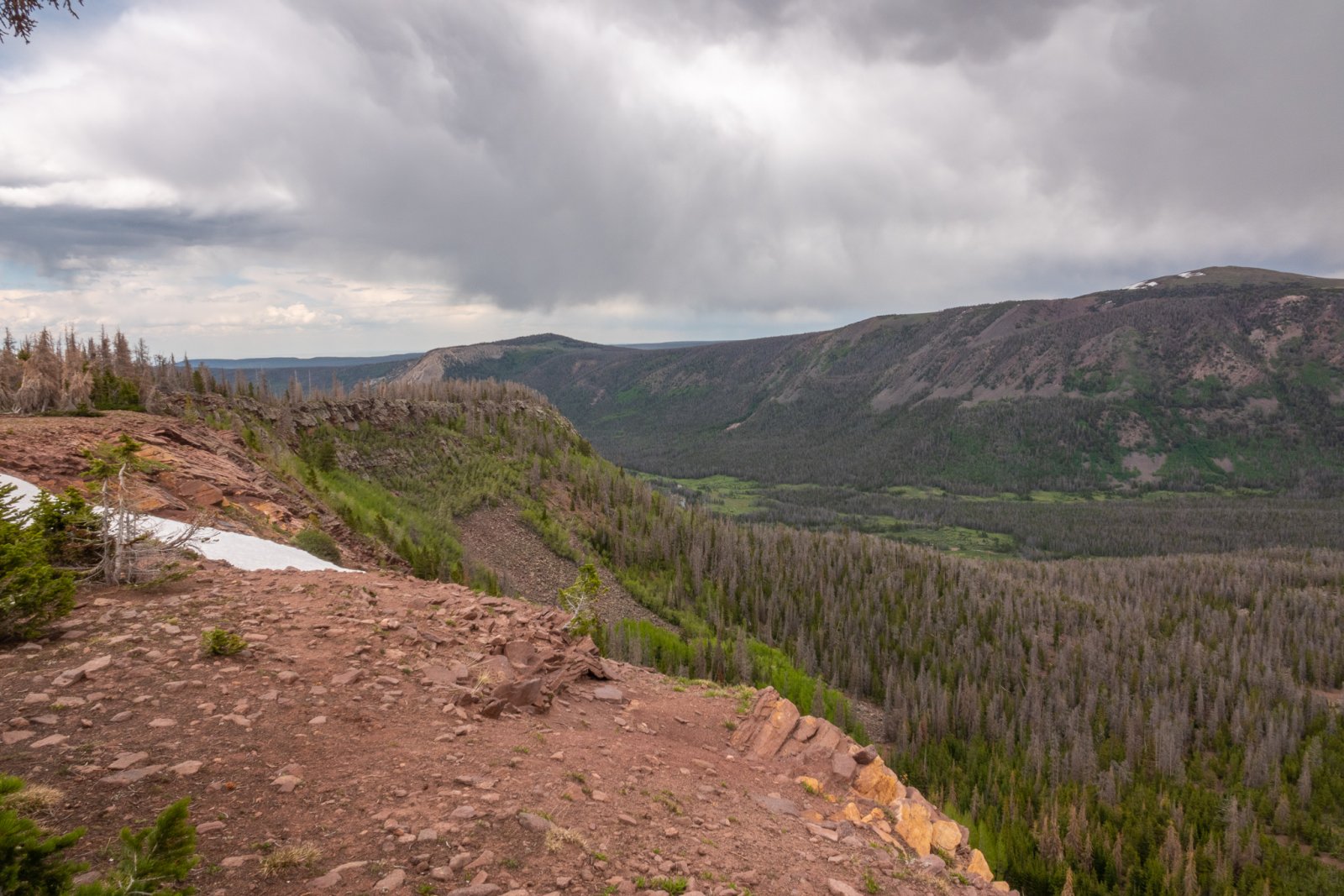 Snow drifts were along the top of the ridge, some of which were still as deep as my trekking poles. Several stubborn cornices clung to the cliff edges. 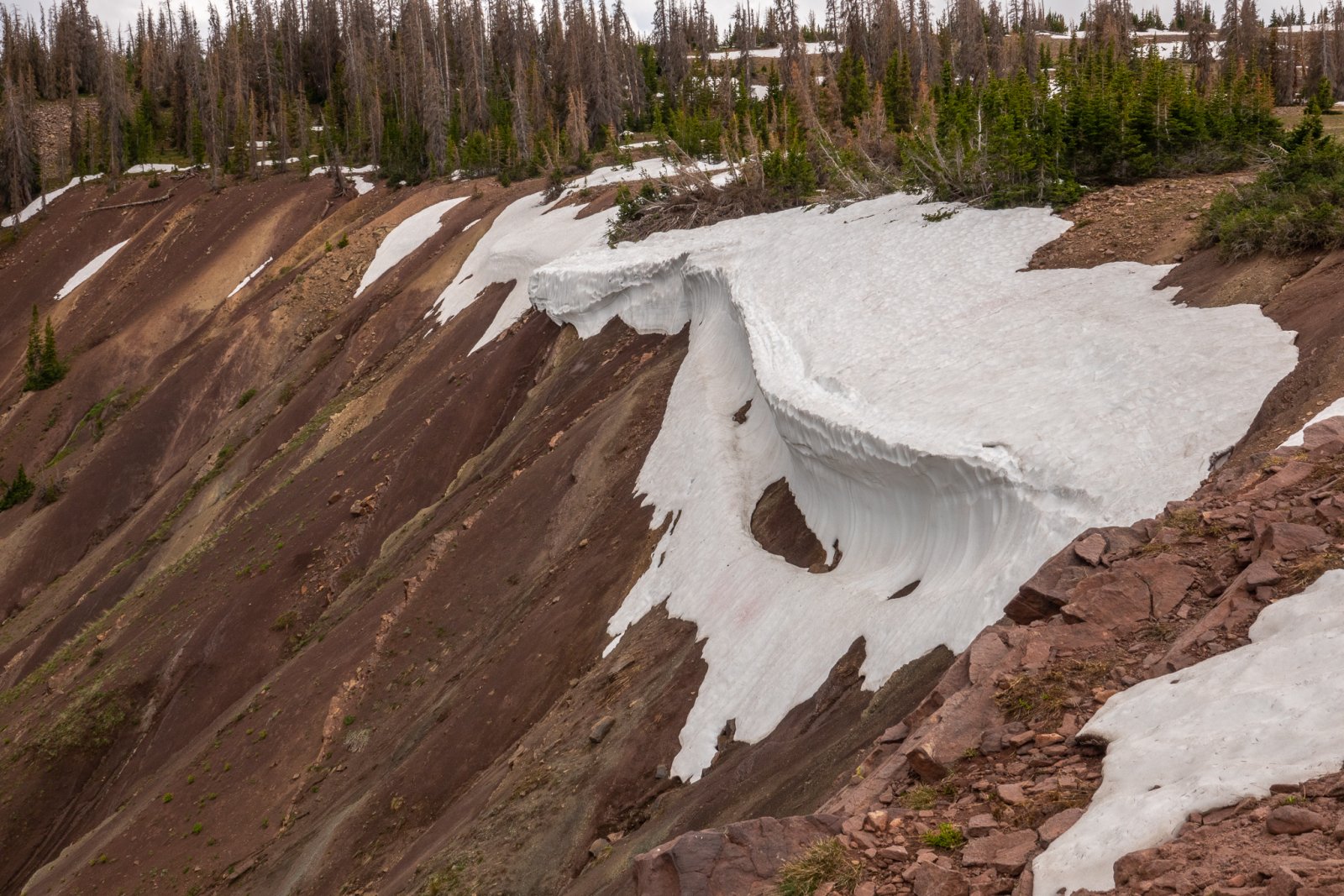 The area to the west opened up revealing a view of the surrounding area where you can see the wind farm along interstate 80 in Wyoming.

Still no trail to be found I continued following my route SSE climbing to yet another open area and high point of the trip at 11,150 ft. The area revealed the stunning Tokewanna Peak. 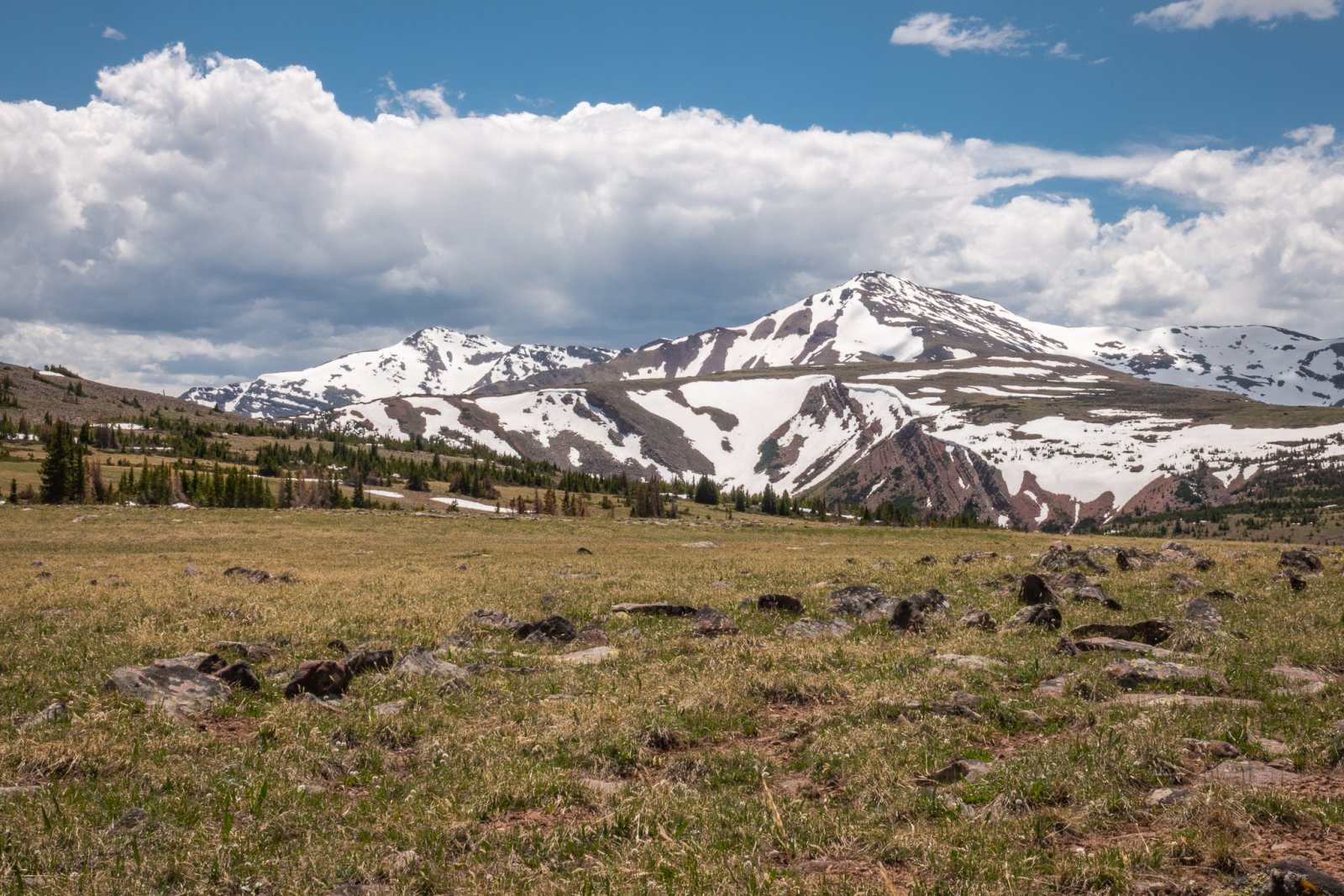 The sun had finally come out and I took advantage of it taking a break to soak in the beauty.

From here I would begin my descent back to the west. Little did I know what was come my way before I would reach the main MFBF trail. There continued to be no trail but I continued on down to a small drainage where I saw a heard of bull elk off in the distance. 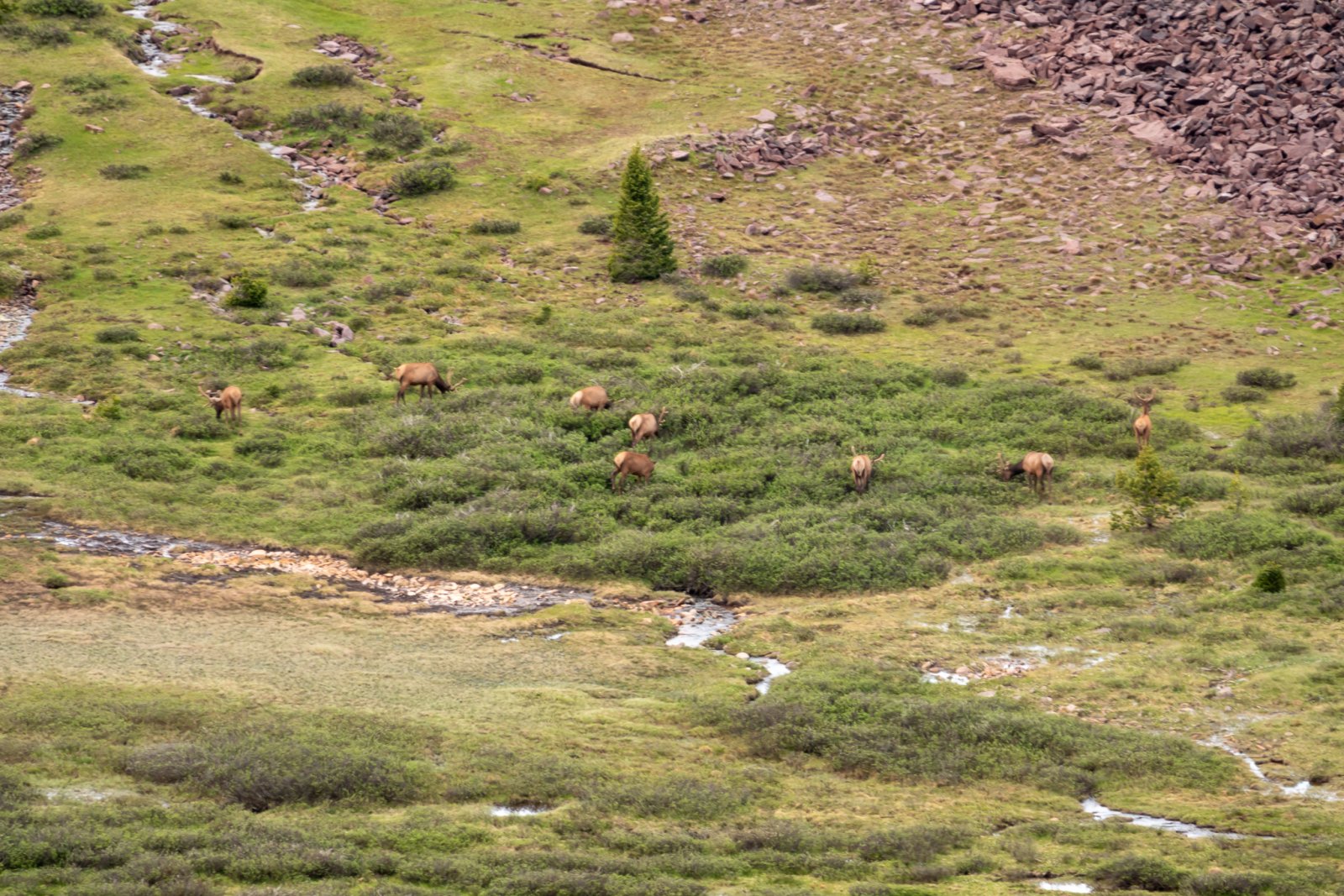 Soon I crossed the area where the elk had been seen and up and over the next hill. 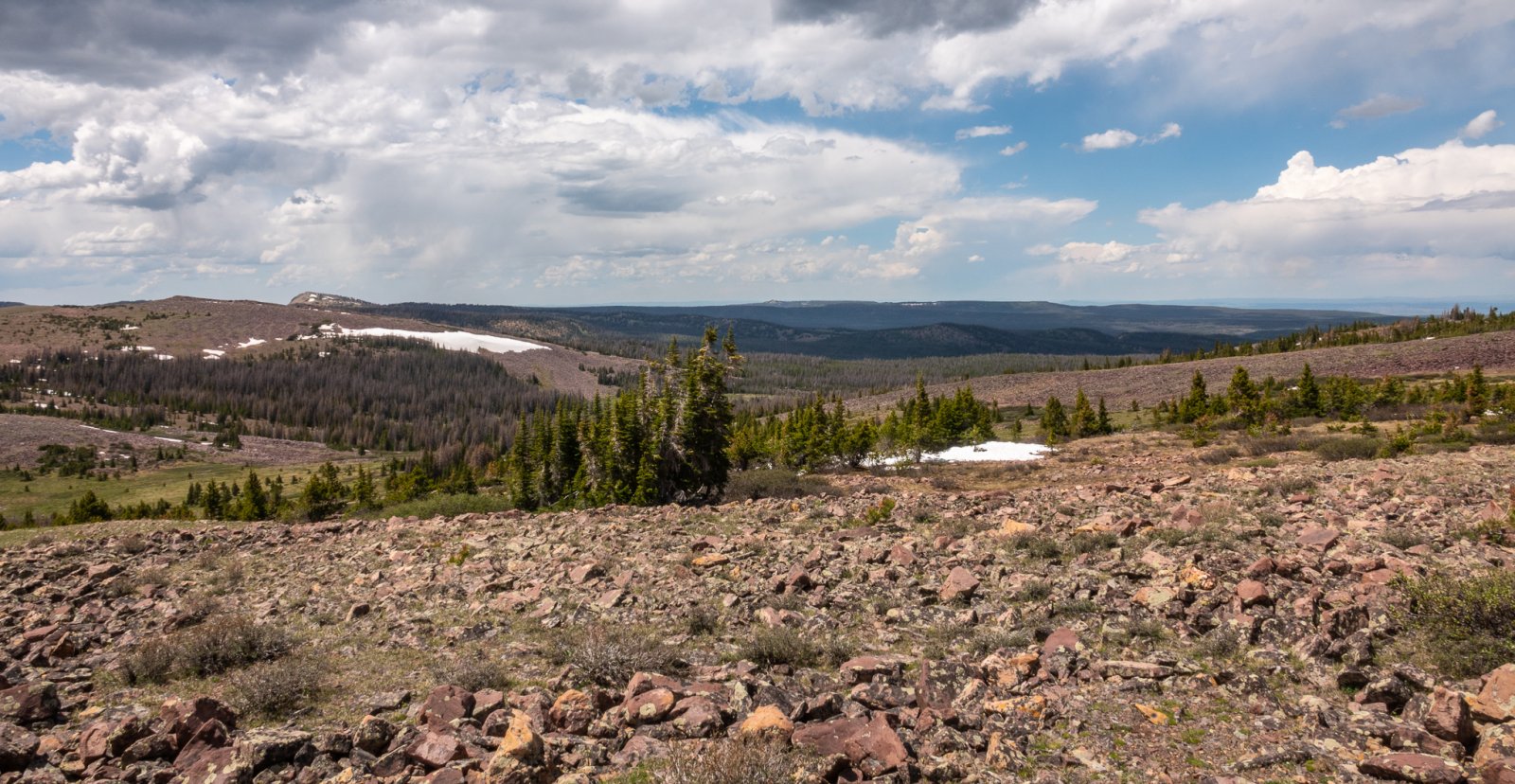 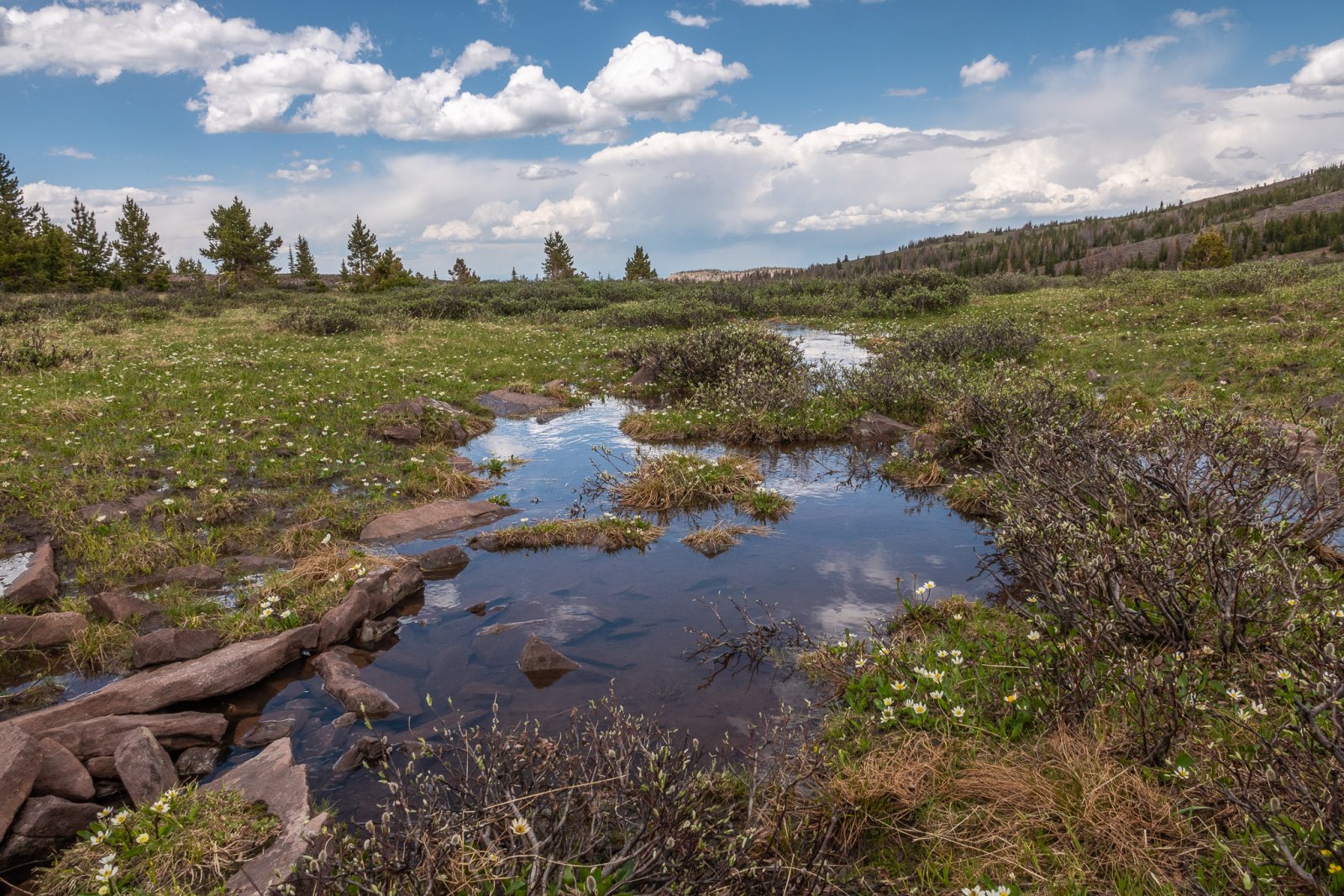 Down the next hill and up another I would cross a curious area that was all mud. Channels where water had flowed crossed everywhere. Luckily it was mostly dry and not a problem to cross. The mud area led to the real challenge of the day. I would have to cross a loose rock field for the next mile or so to get over to the main drainage. This rock mountain was not too unlike most of the Uintas above tree line but the rocks were unusually loose. Travel required much care and slowed my progress significantly.

After much effort I rounded the top of this mountain only find even more of the same on its western flank. It was also much steeper with much of the rock at egress. At one point the rocks where on top of some solid rock making it extremely easy to start things sliding. Another place I had to crab walk down a slab covered with sand which made traction a real problem. The map route had me crossing to the north, across another one of these slabs, then switching back to the south only to cross even more of the same loose rock. At this point I decided to deviate from the route and head for a group of pines, hoping to find a safer way down off the mountain. It was still steep but much less loose rock made me feel a bit safer as I made my way to a meadow below what I had just crossed. 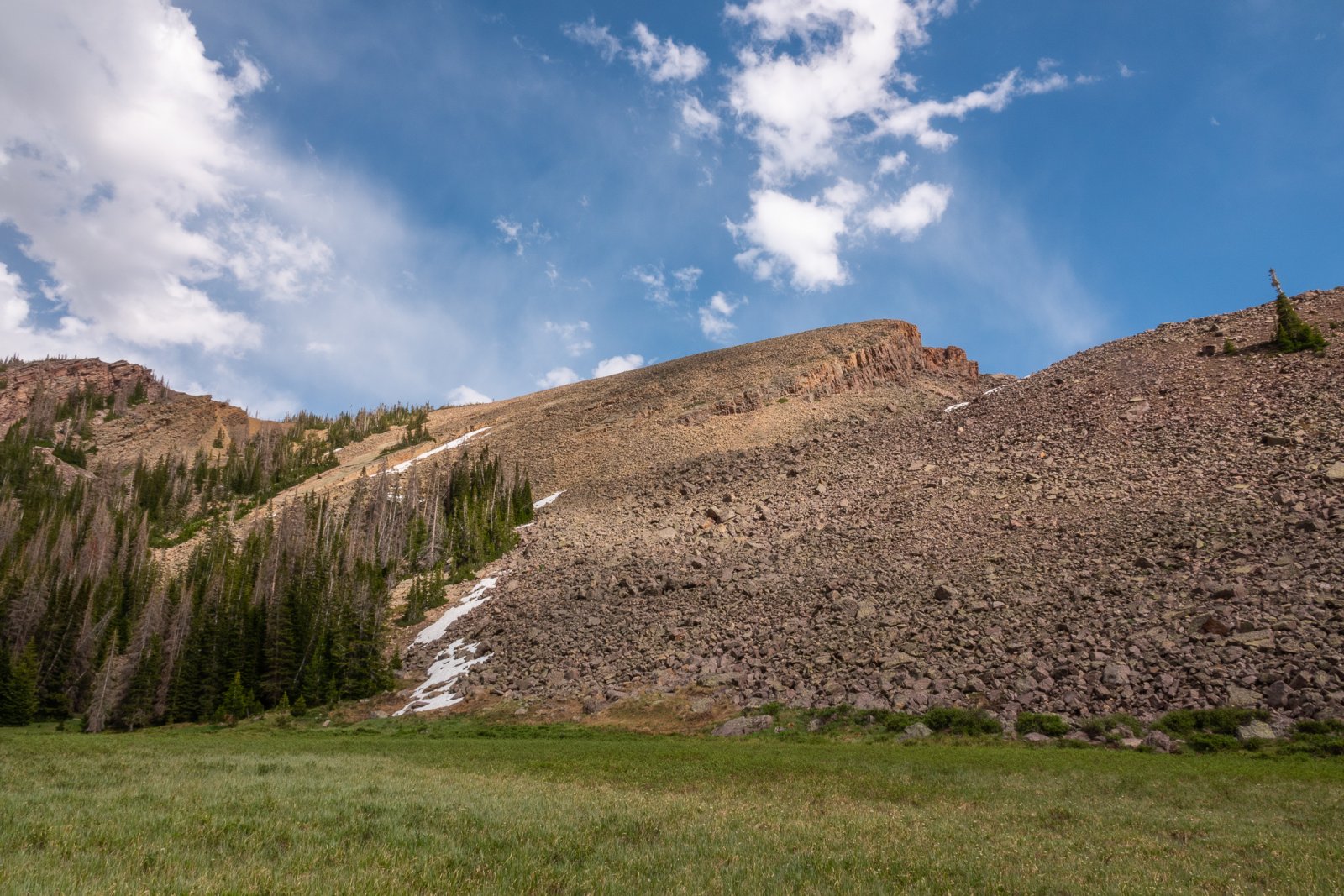 Much relieved I headed west through swampy meadows, crossing the river and finally hooking up with the main MFBF trail.

Arriving back at the trail head much later than I had planned I contemplated why the Forest Service would include this "trail" on their map. Without some route finding skill someone could get into serious trouble on this route. Particularly the loose rock crossing.

All in all it ended up being a fun adventure. The sun had come out during the best part of the trip up on top, where the mosquitoes were no problem. My InReach recorded 20.4 miles. Taking into account about five or six of those miles are off trail it was a good workout and I felt accomplished having pulled it off.
Last edited: Jul 23, 2019

Awesome exploration! And awesome that you've been getting out to the Uintas in spite of the extremely late snow melt this year.

Really cool elk encounter, and that descent from that strange slope looks really interesting. Heck of a day hike!

Jackson said:
Awesome exploration! And awesome that you've been getting out to the Uintas in spite of the extremely late snow melt this year.

Really cool elk encounter, and that descent from that strange slope looks really interesting. Heck of a day hike!
Click to expand...

Coming over that rock mess was pretty intimidating at the time. Now seems like an adventure. Short memory I guess

Definitely sounds like an adventure! And yes, you should feel accomplished.
Thanks for sharing!

Loved the video
-----
My favorite part about mornings is greeting every spider that traveled across the trail that night, with my face.
Check out my Video Trip Reports and Timelapse videos!

Thanks NWW!
You must log in or register to reply here.
Similar threads