Mid-July in the Missions

This was originally going to be a trip to the Bob Marshall Wilderness, but circumstances rendered it so we didn't have enough time. You need probably 3 nights minimum for a decent trip in there. So we re-set our sights on the Mission Mountains nearby. Where we went is probably the most popular spot in the range, so we saw a good number of people, but I'd classify it only as "busy" by Montana standards.

We met in Seeley Lake since two of us (Chris and I) were driving up from Bozeman, and Andrew was driving over from Spokane. We headed into the forest to find a spot to camp for the night. We found what appeared to be a not frequently used trailhead off the road and set up there. Had a fire and some huckleberry cream ales. Bugs weren't terrible either. Not bad. Gave me an excuse to bring the car camping tent too. Always nice to have a lot of room. 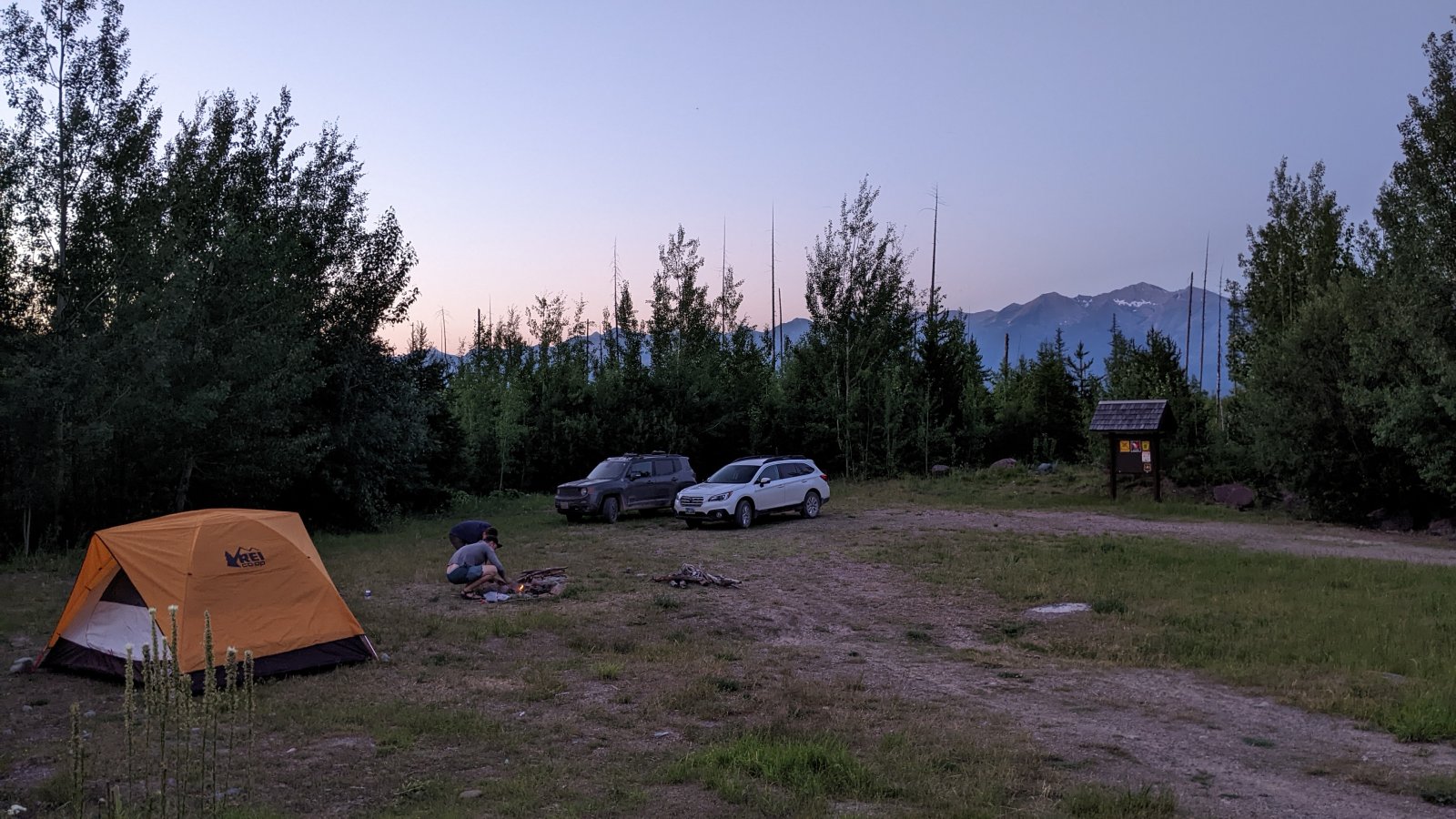 We drove the remaining miles to the trailhead in the morning. By some miracle, Chris had a bit of cell service even though we were 10 miles up a dirt road in the woods. So we waited a second for Andrew to buy a fishing license online so he could try some of the lakes we'd see. 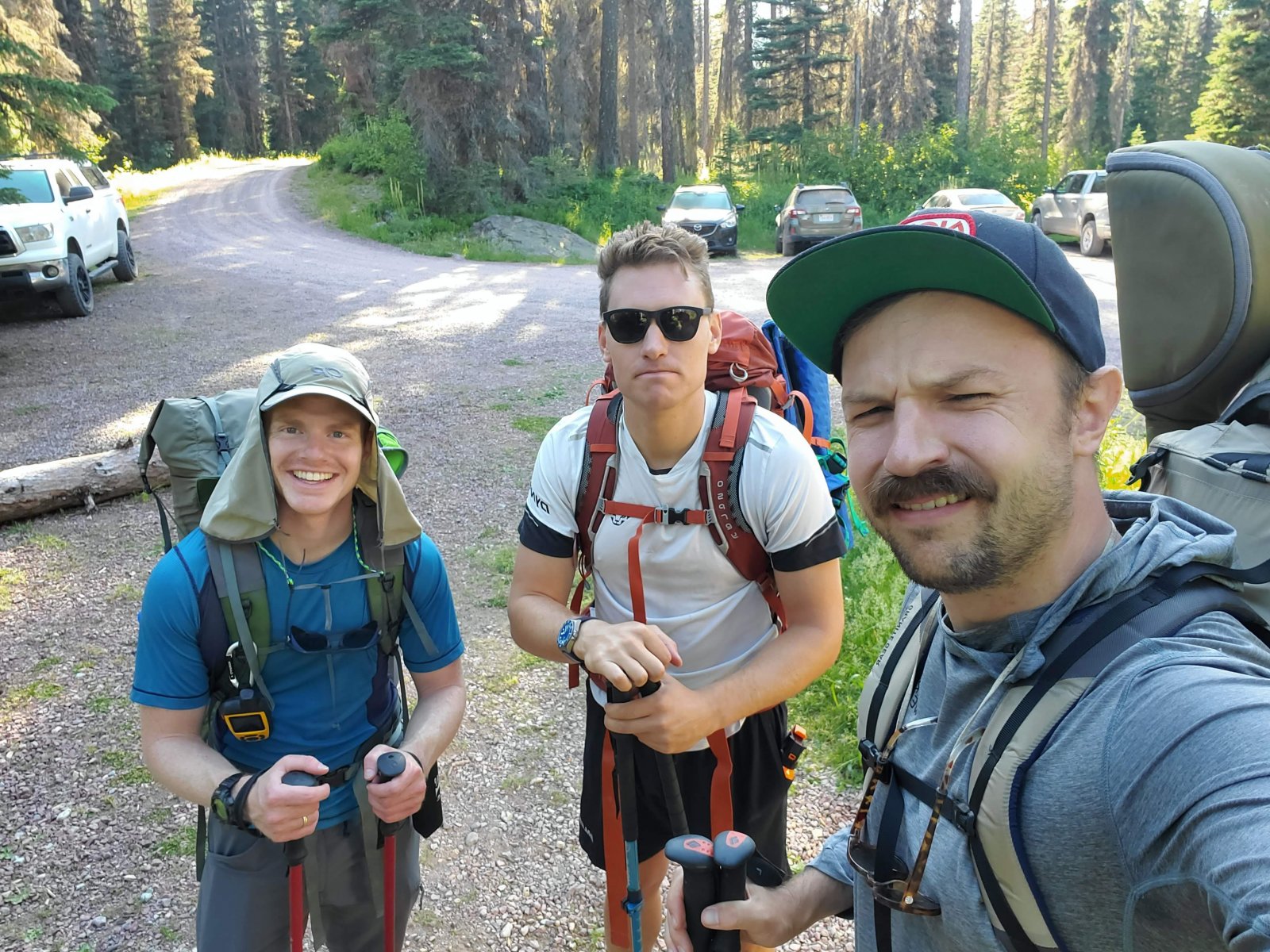 Me, Chris, Andrew. Ready to roll. 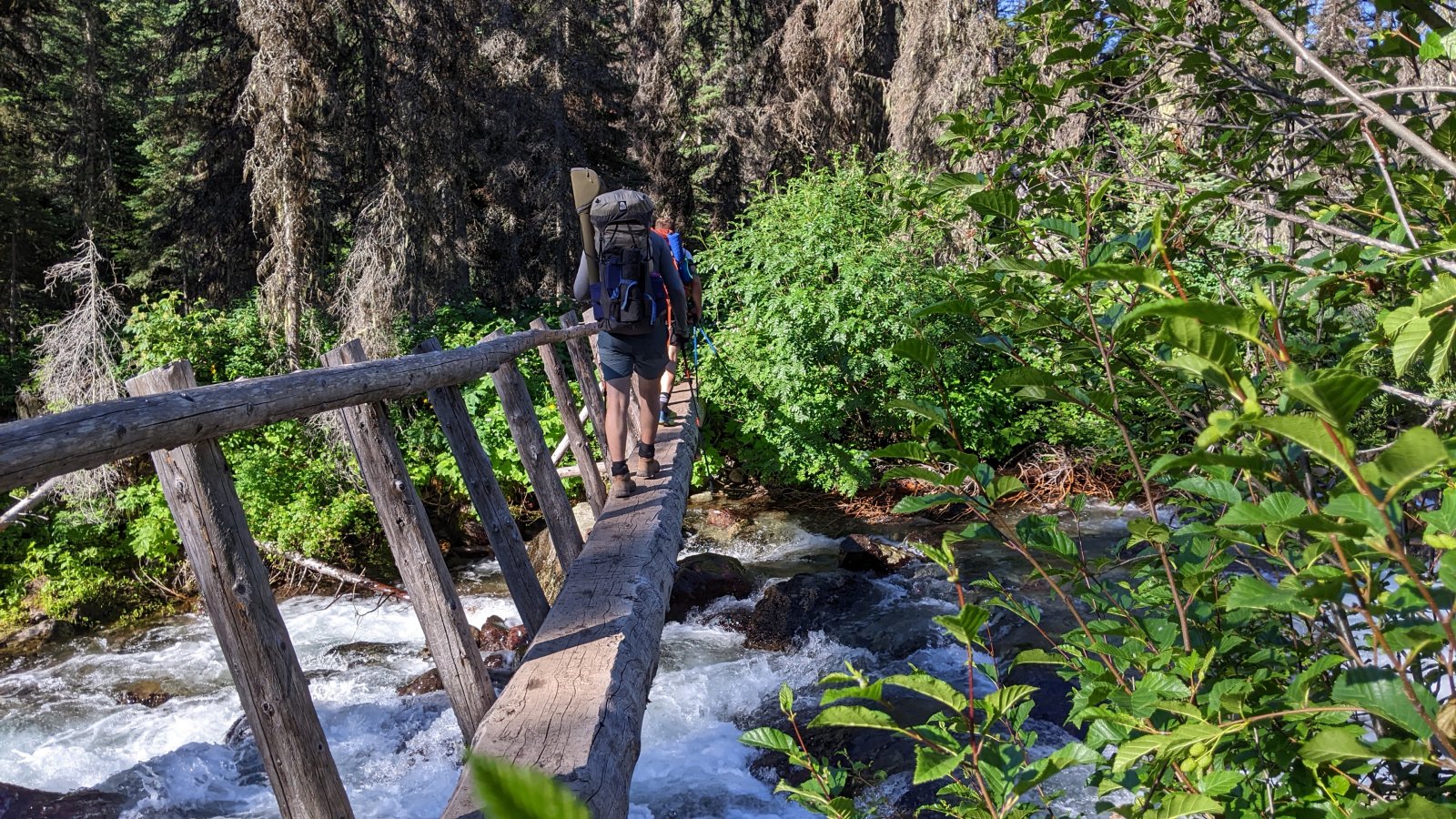 Pretty quickly we came to our creek crossings. This one had a slanty bridge. 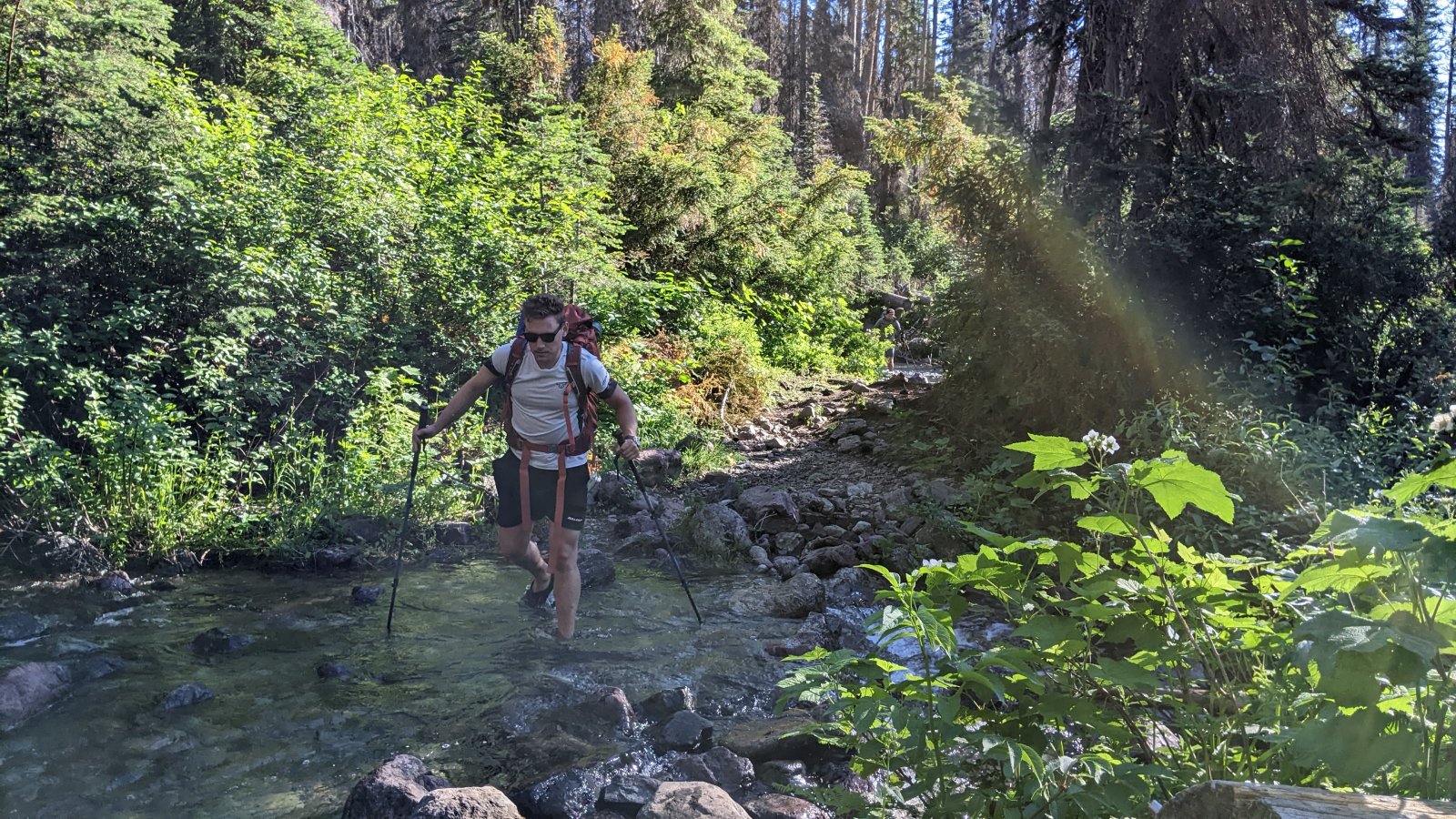 This one required us to change our shoes.

We passed the first lake but never really got right up on it. There's a spur trail we could have taken, but we didn't want to bother with it since it was supposed to be a hot day and we were trying to move quickly while it was kind of cool out. We saw it from up high, and that was good enough. 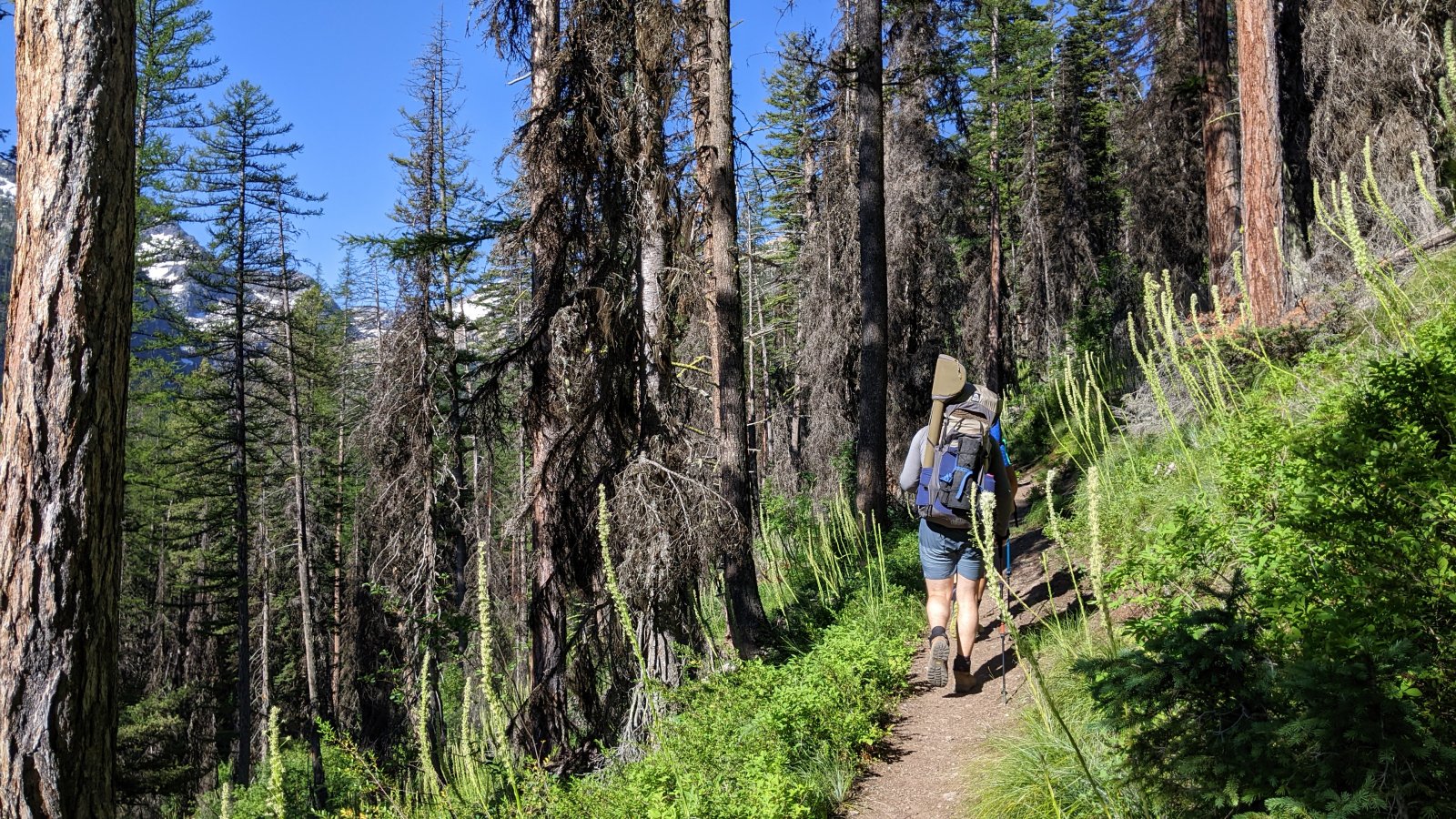 Climbing up out of the forest. 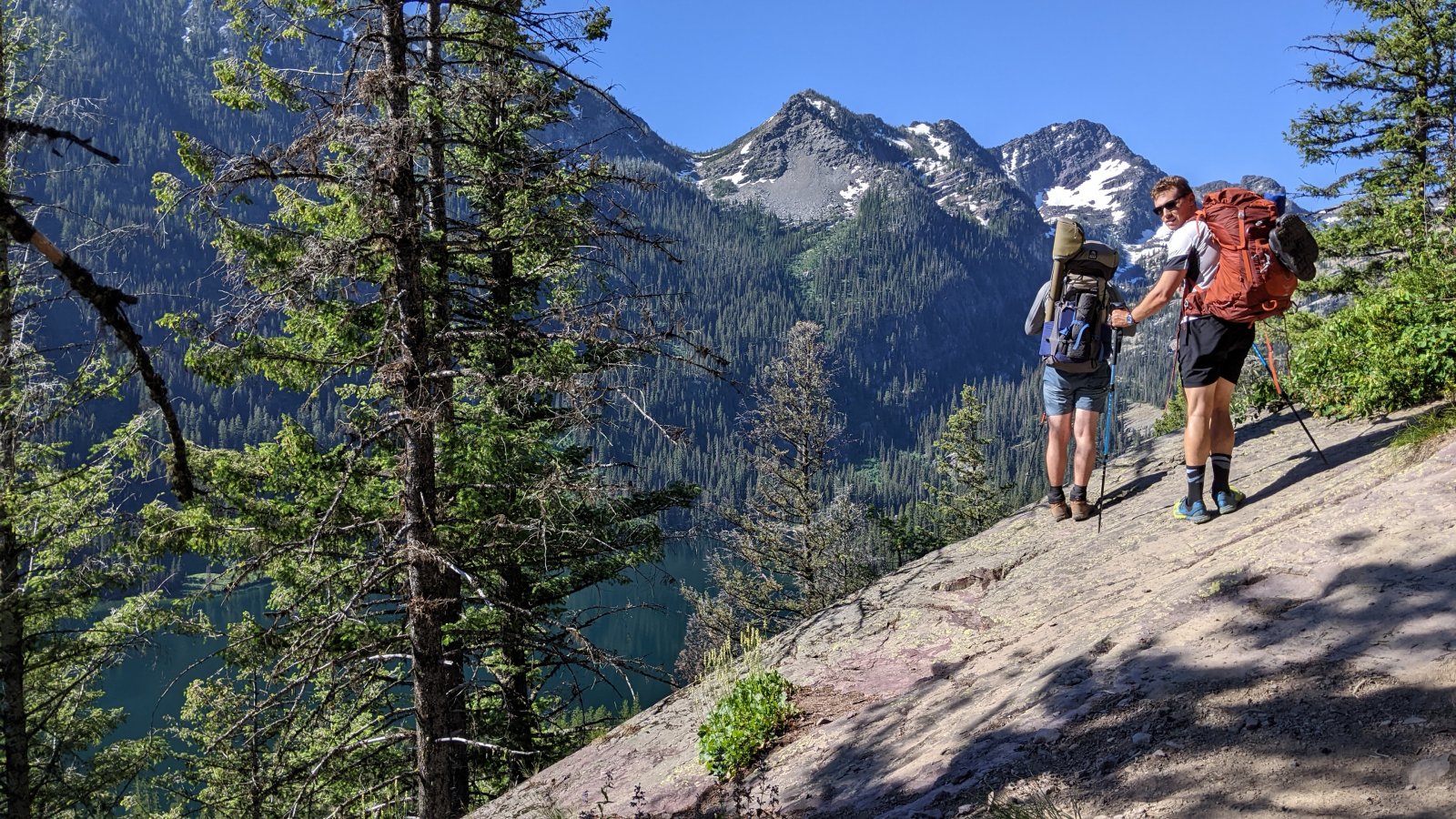 Nice spot with a view. There's the first lake down below. 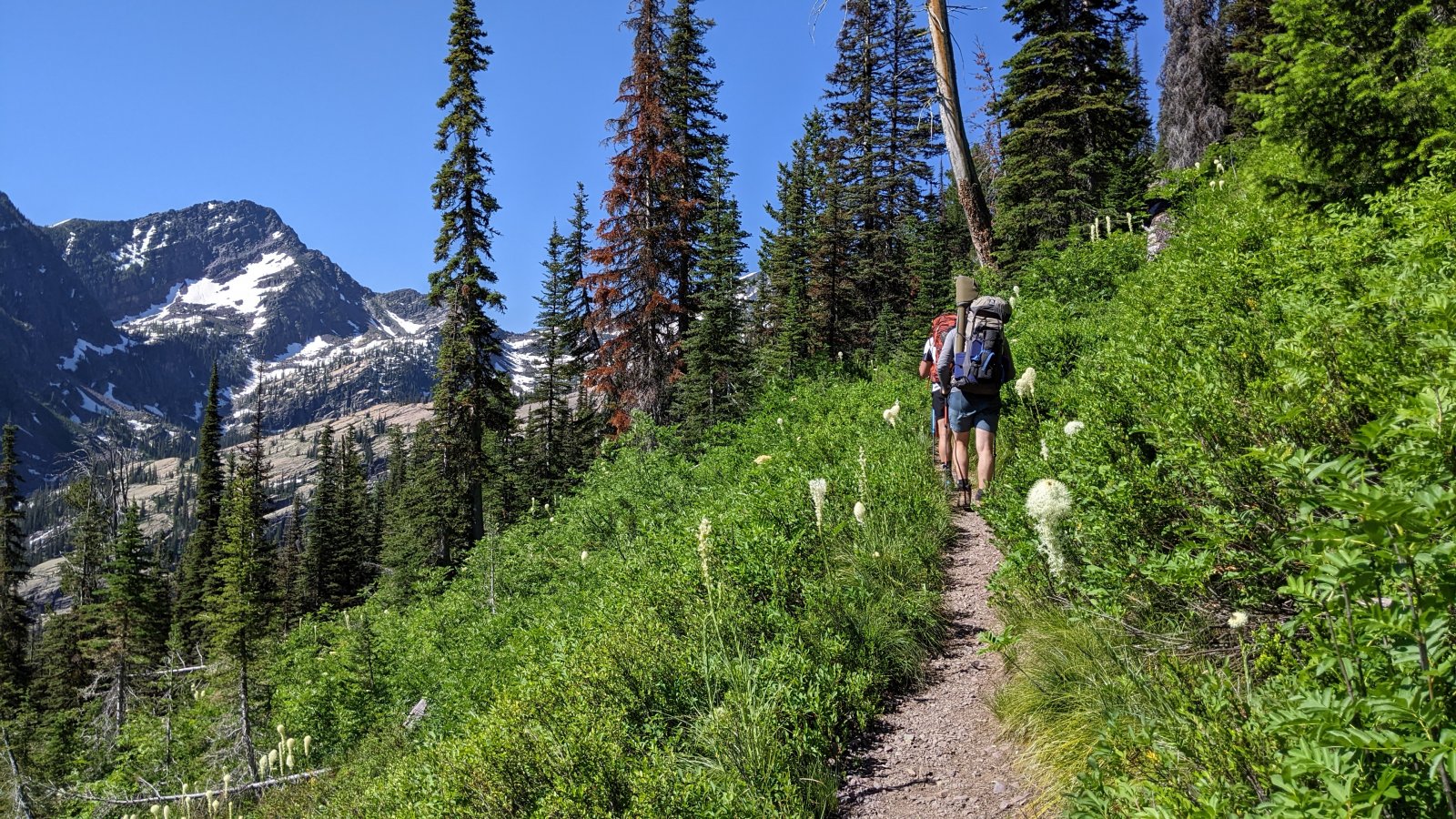 There was bear grass everywhere on this trail. Very dense in a lot of places, especially down in the forest. It had yet to really bloom down the lower forest though. Up high, it was going off. Apparently there's usually not much bear grass on this route, so we were lucky with our timing. 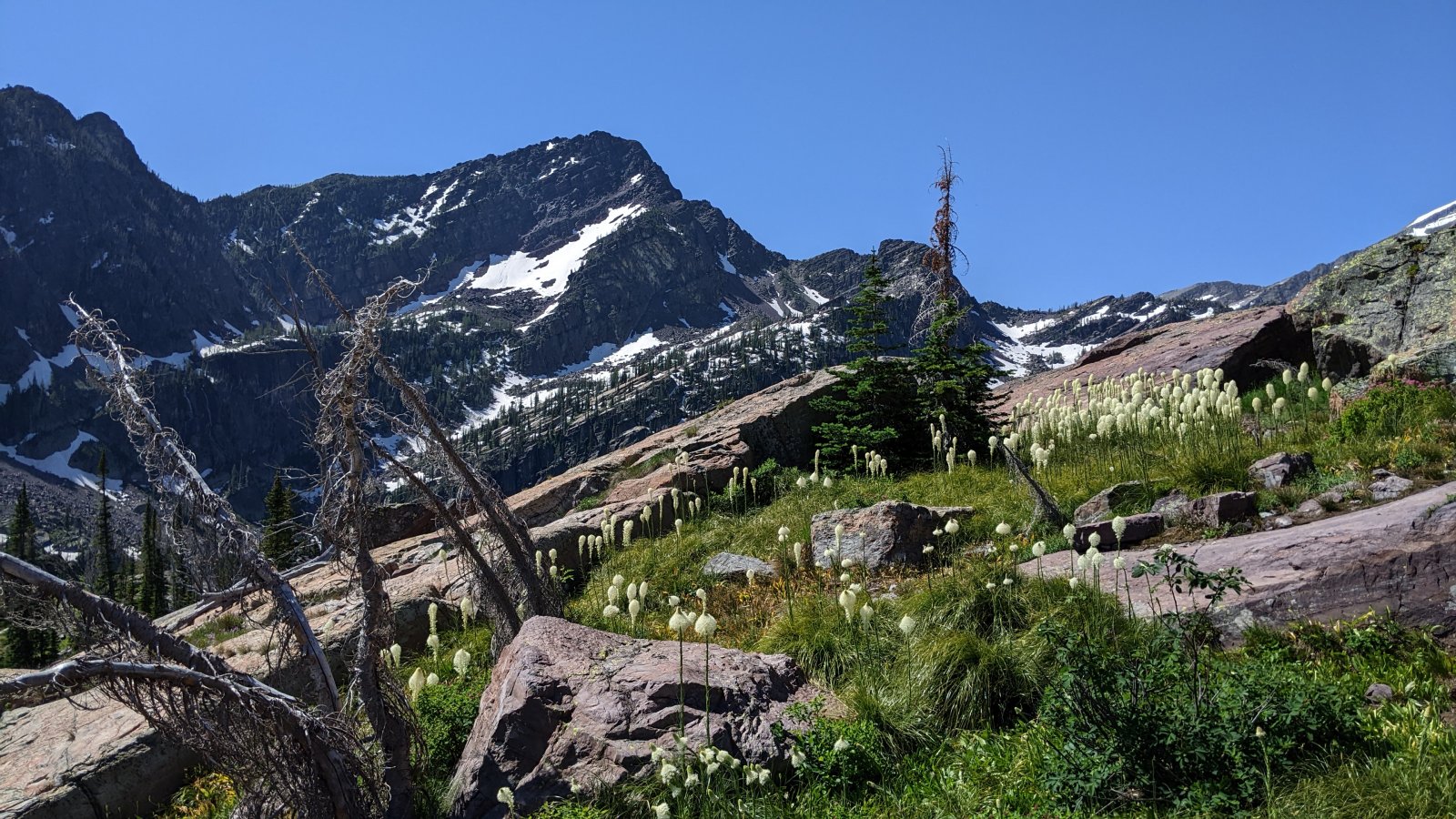 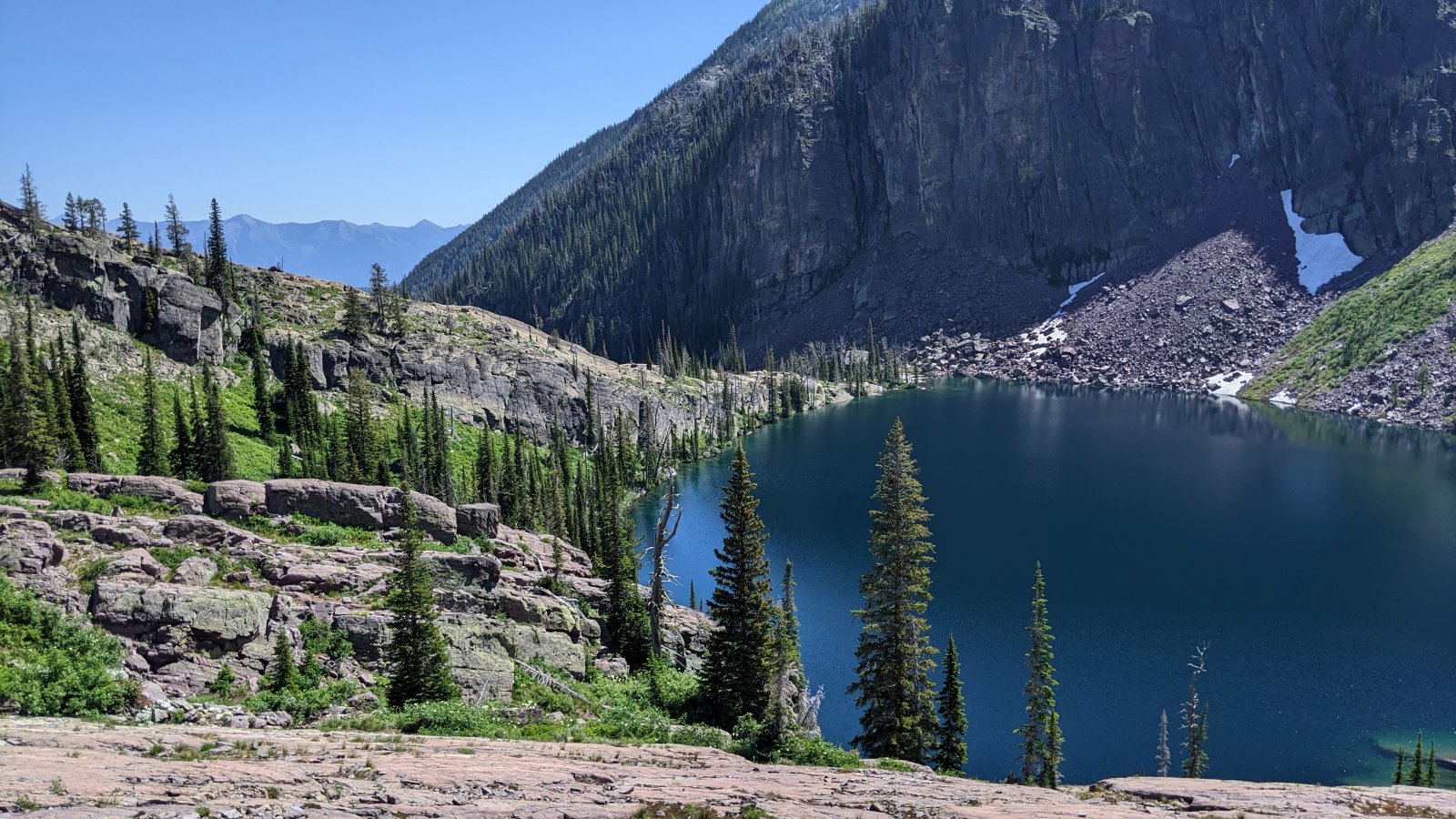 The next large lake. Loved the sheer walls and the drop off at the foot of it.

There's a handful of smaller lakes up there also, and the terrain makes it kind of hard to find a good camp site. Because the area sees a good bit of use, it wasn't hard to find spots people had used previously. We found one that worked well enough, although it was closer to the water than it should have been. It was on slick rock maybe 15 feet above the lake though, so that kind of helped. 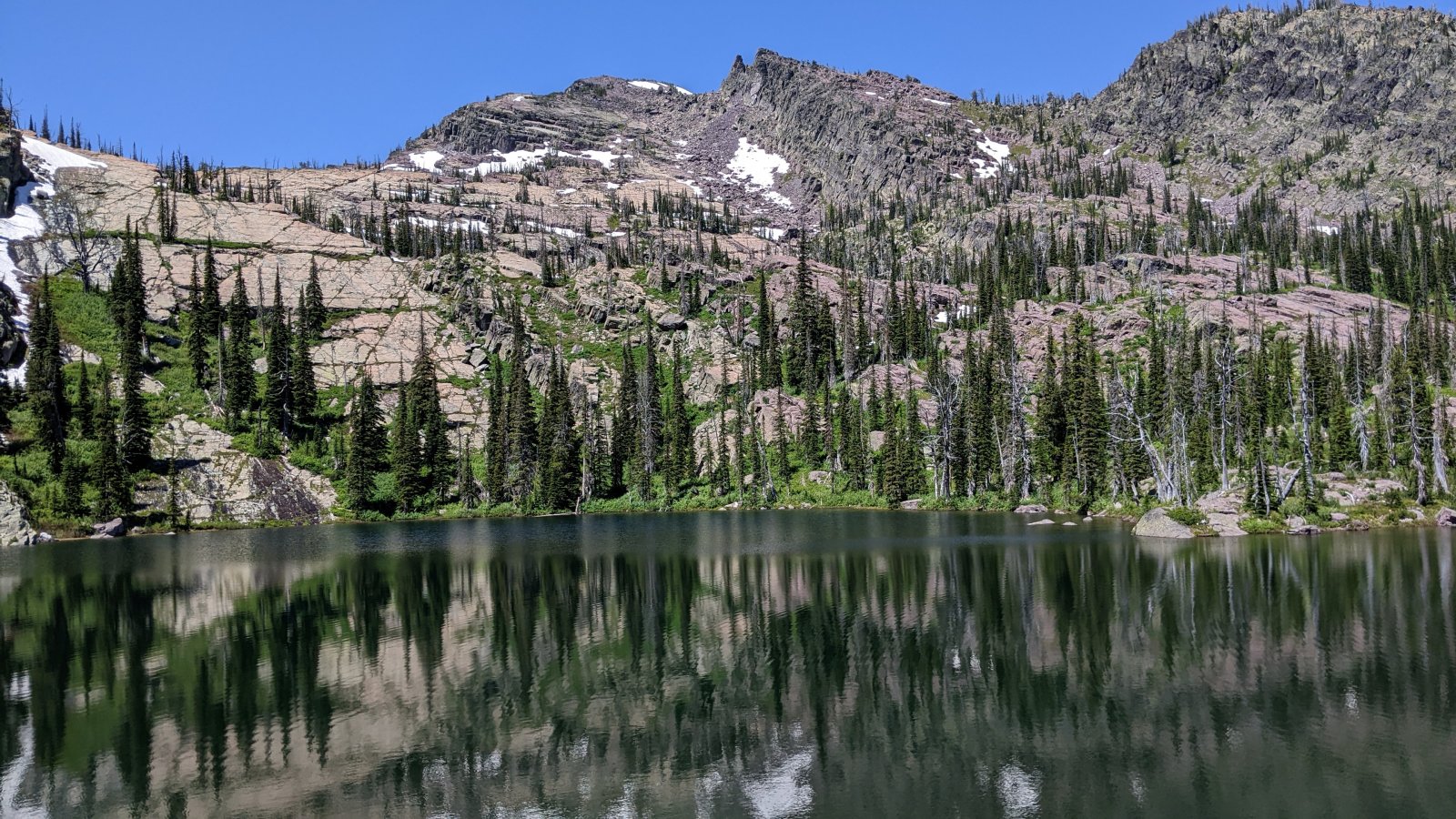 Lake we camped at.

We set up and then headed up to see the largest of the lakes. 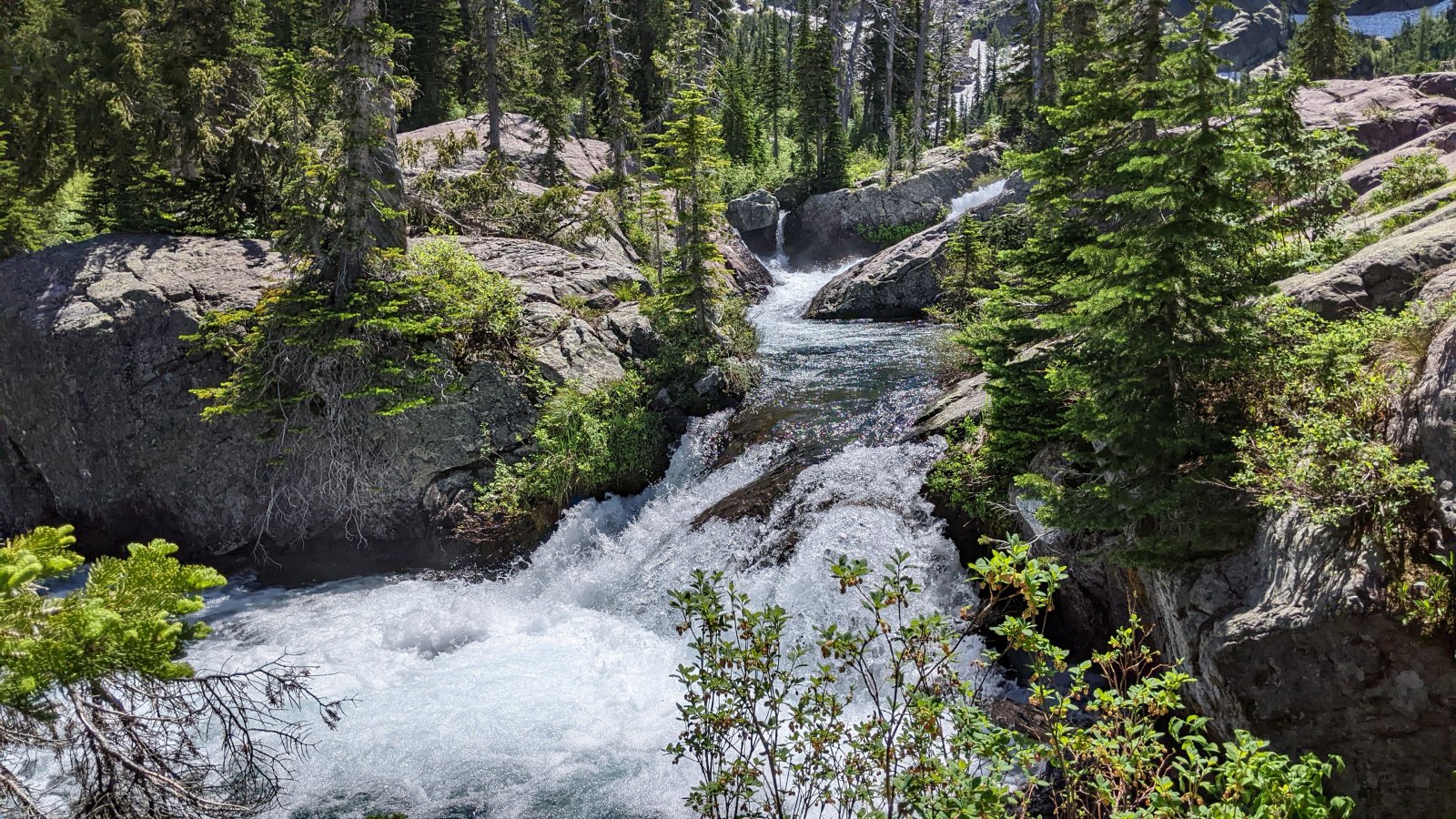 Outlet of the largest lake. It was interesting seeing all the channels it ran through. 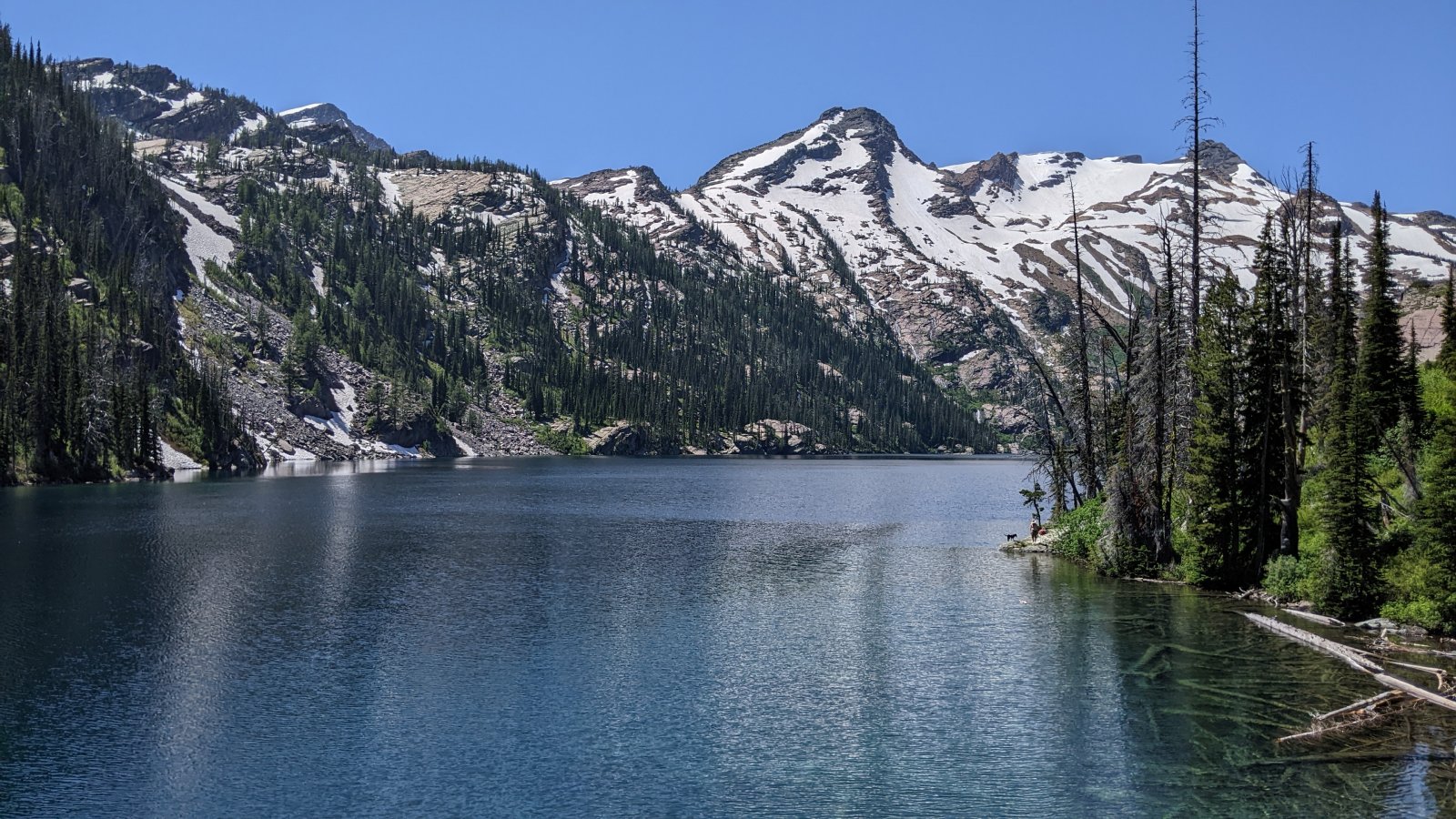 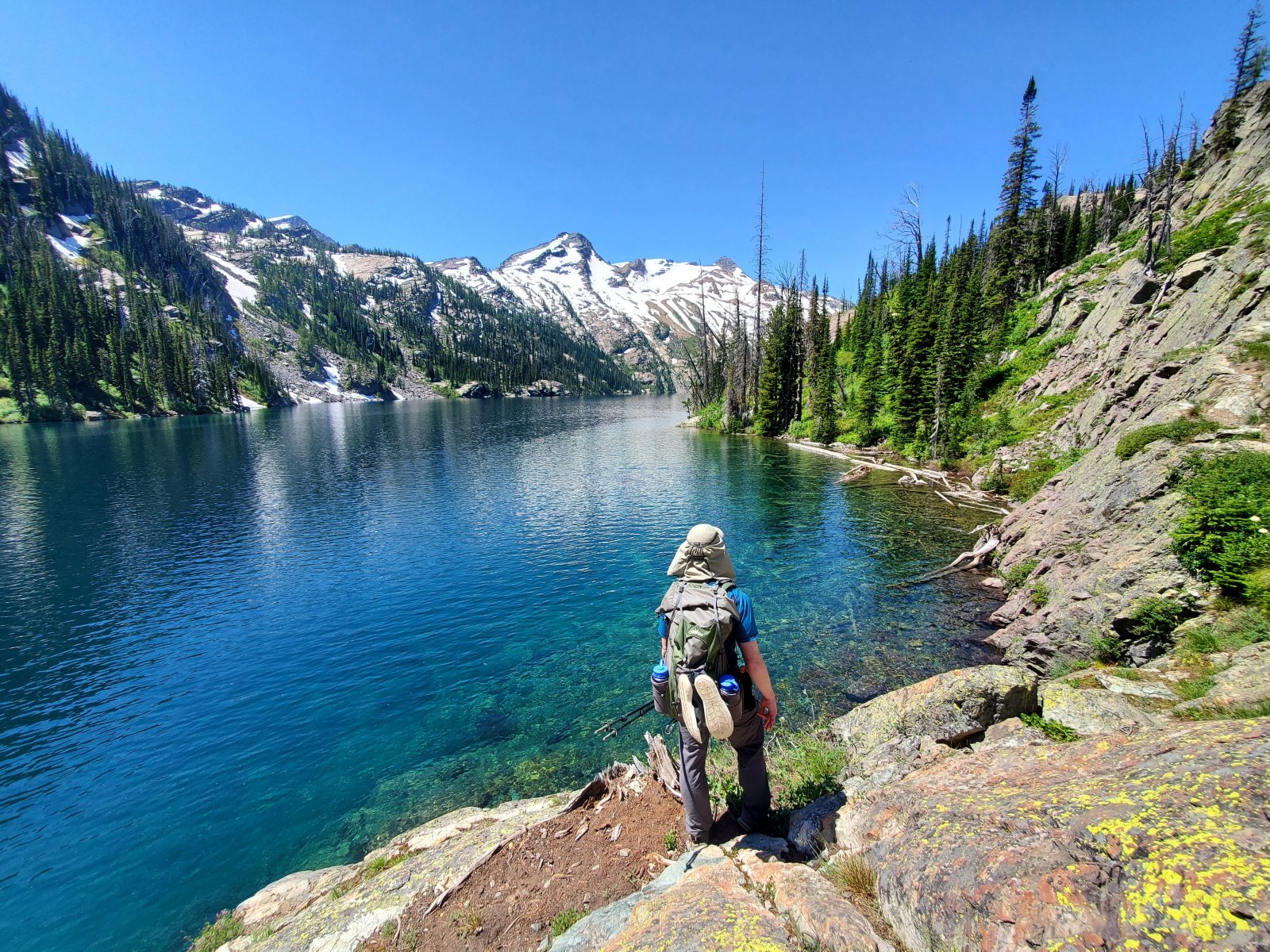 Me, taken by Andrew.

Because it was hot, we decided to strip down to our underwear and jump in the lake. It was quite cold, as you may have guessed by all the snow in the background melting into it. I have videos of us jumping, but I won't subject anyone to seeing us in our underwear. Ended up jumping in maybe 4 or 5 times.

We hung out by the lake for a good while. Andrew tried a few casts, but there were either no fish or extremely few in there.

We left and checked out the log jam and outlet of the lake. 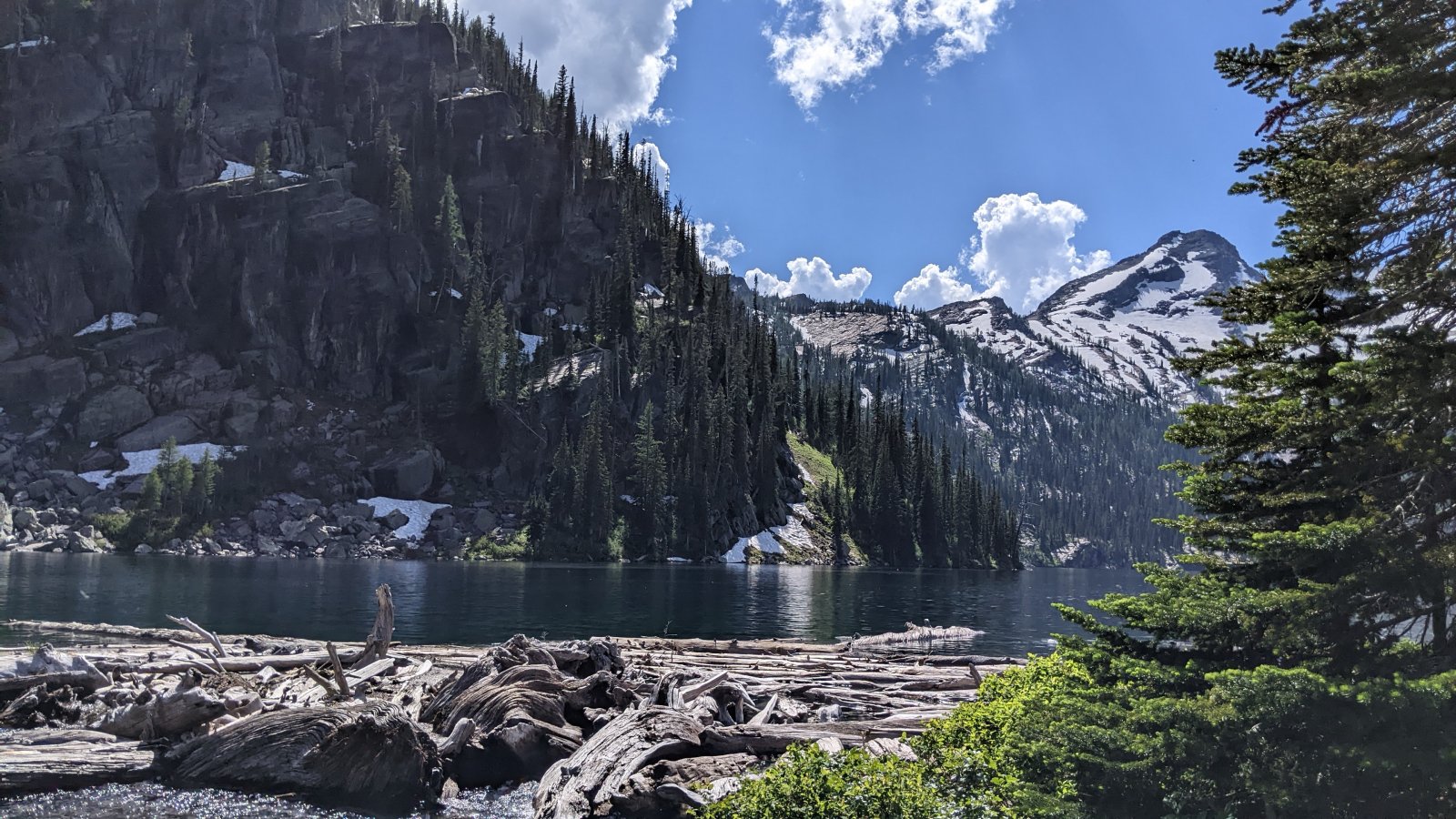 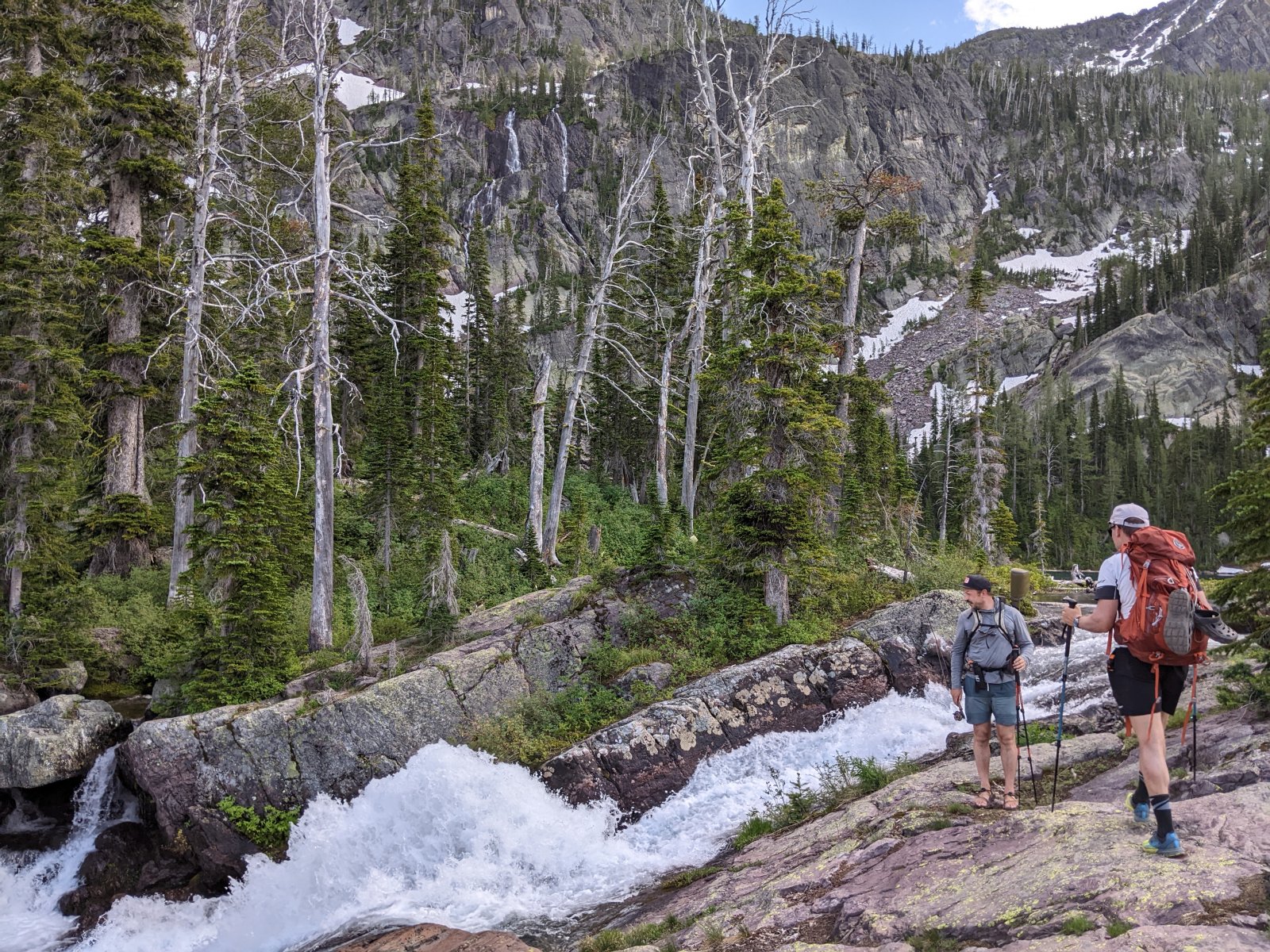 The water was really moving. There was some feature to the rock under the stream that made the water it shoot up really high in that spot. 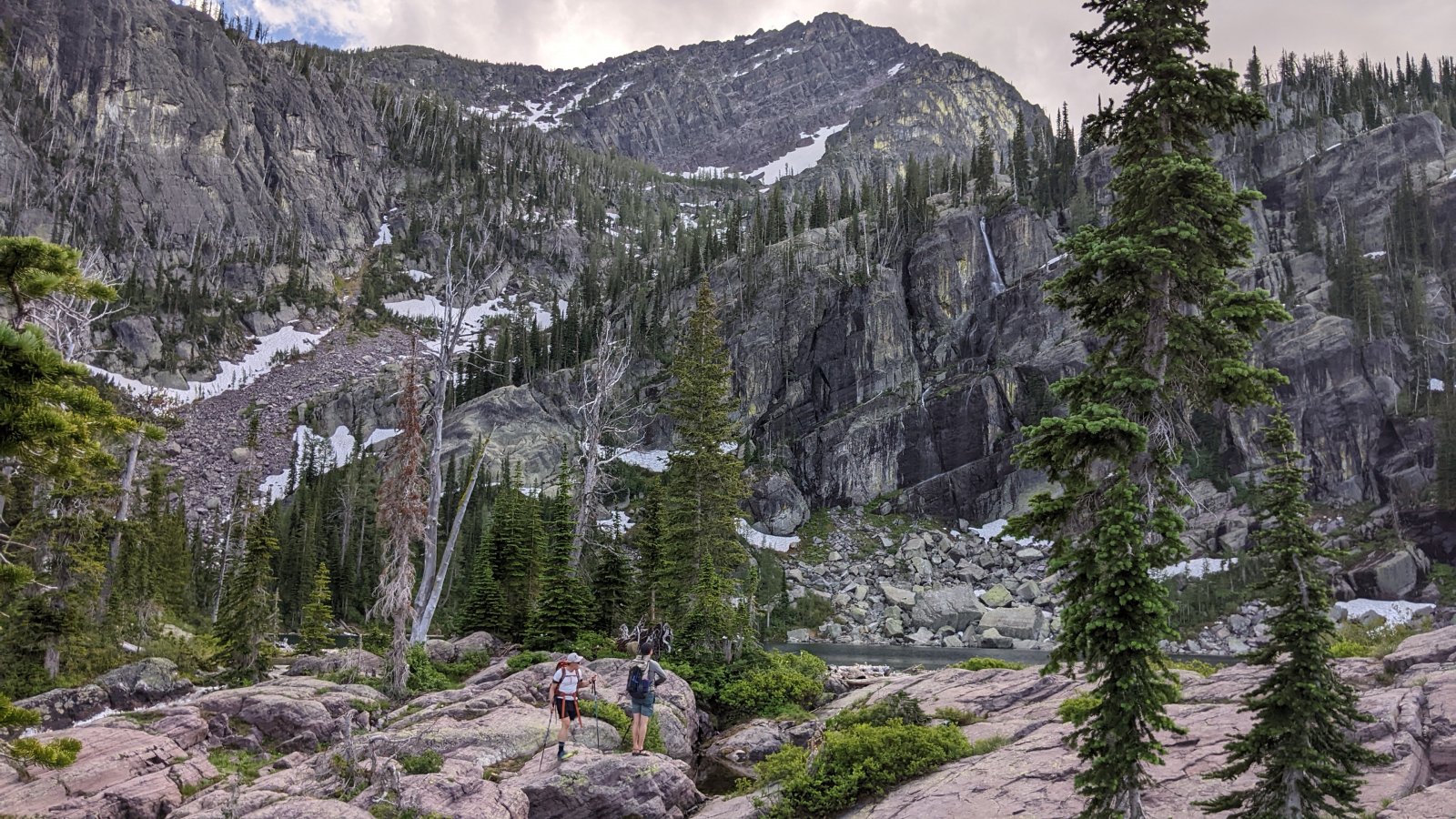 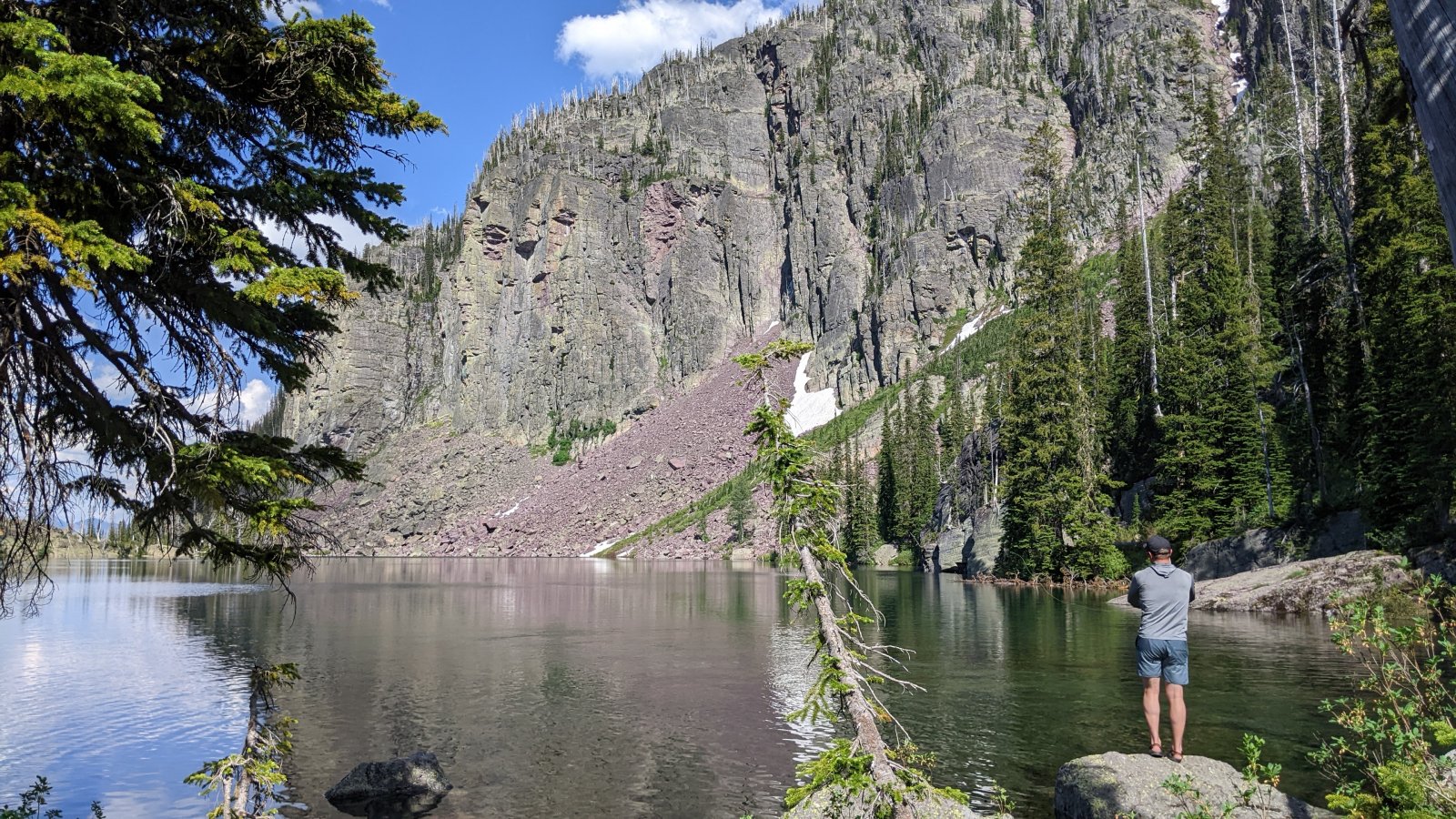 We went down to the other large lake and saw a fish rise. Andrew tried several casts to no avail. Nice place to hang out regardless.

Got back to camp, ate, and watched the sun set. It didn't get too cold that night. 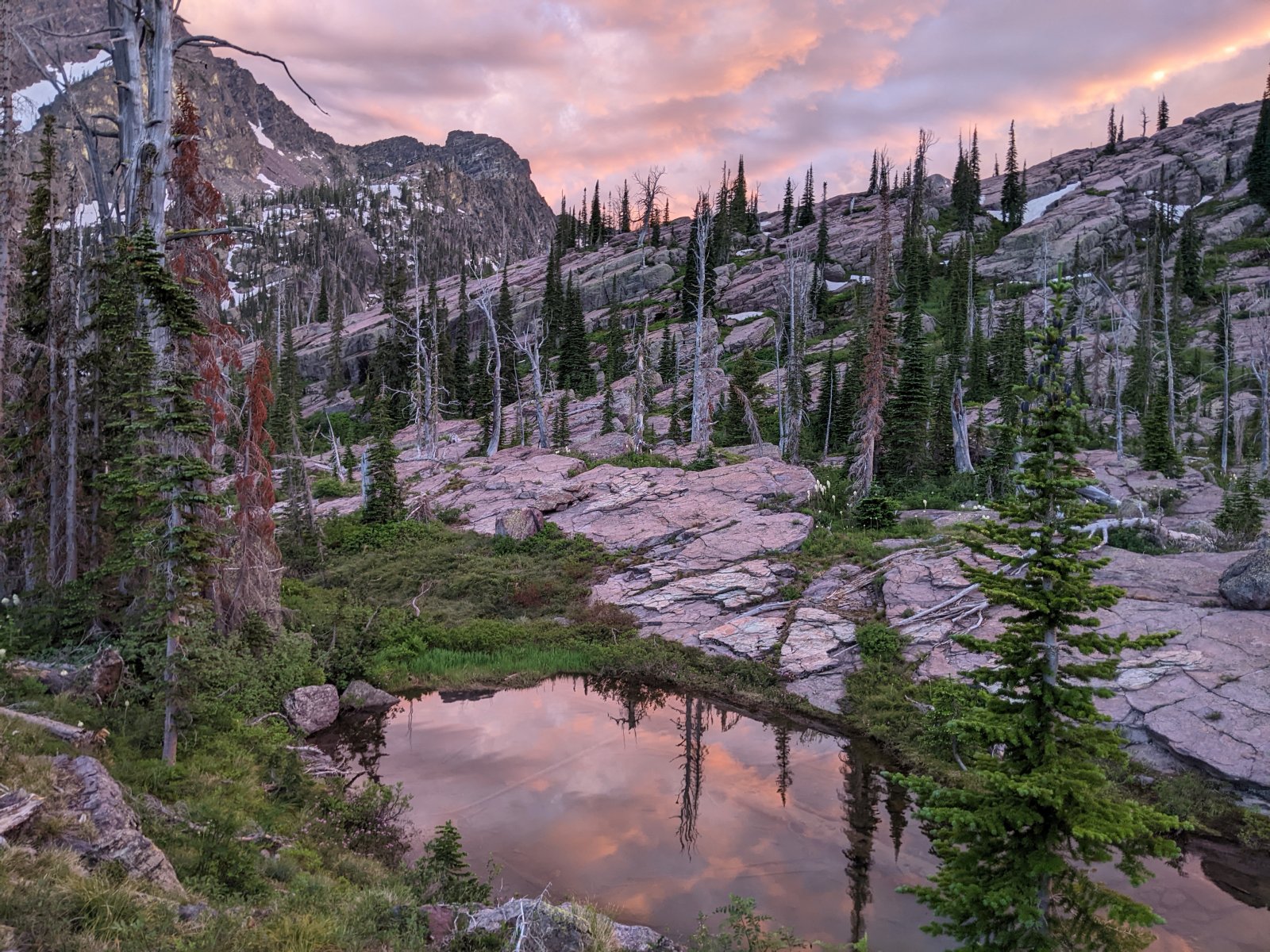 Really nice sunset thanks to some late afternoon/evening clouds.

Sunrise was also great. I got up as it was coming up, and I was glad I did. 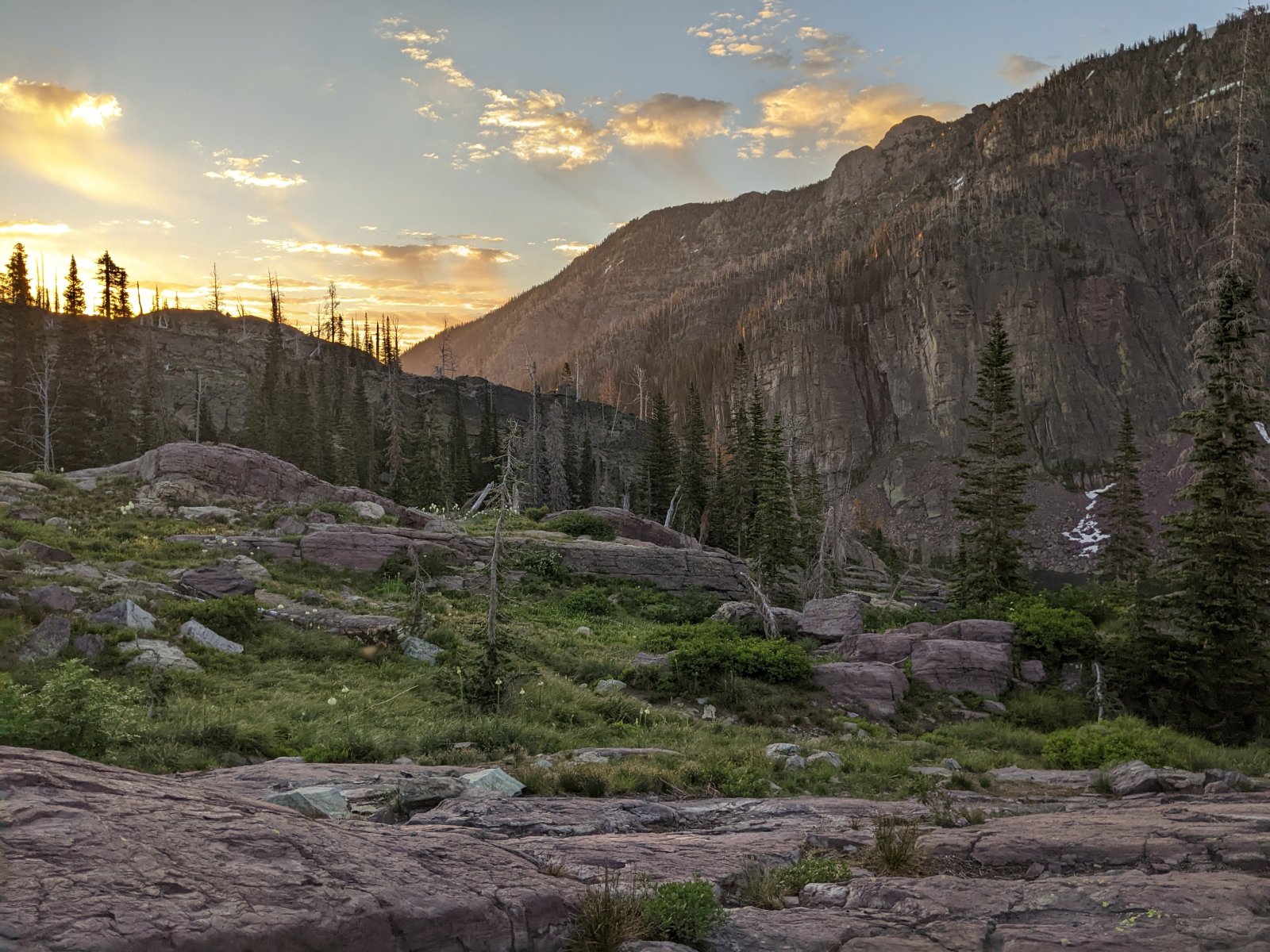 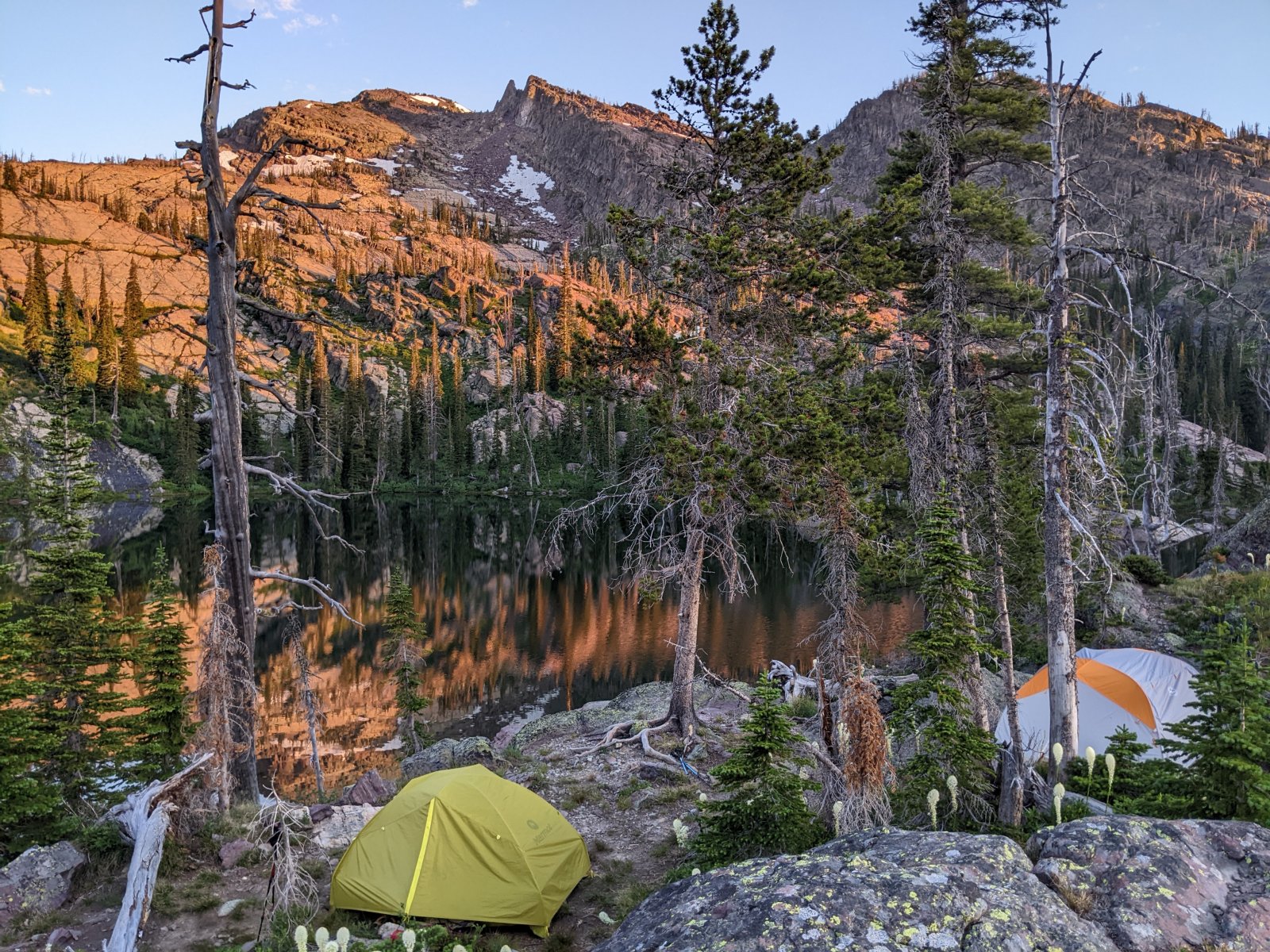 The hike out was not as hot and sweaty as the hike in. It did seem to take a long time though. We got lunch in Seeley Lake and went our separate ways. Really glad to have gotten out and done this one!

The Missions are on my bucket list @Jackson. Thanks for showing them off to me. Pretty scenery, and I love the bear grass shots too.

Beautiful photos and scenery! Thanks for sharing.

scatman said:
The Missions are on my bucket list @Jackson. Thanks for showing them off to me. Pretty scenery, and I love the bear grass shots too.
Click to expand...

Thanks! There was so much bear grass. I feel like Andrew did a better job of documenting it than I did.

And yeah, the Missions are a really interesting range. There's like 2 or 3 popular trailheads and a few pretty popular day hikes, but then the rest is a lot of old trails (still on maps) that see little to no maintenance, are brutal bushwhacks, and require long drives on probably rough roads. And those lead to just as cool (if not cooler) destinations. Off-trail is rough due to crazy topography. And then there's the tribal side where the trails are brutally steep and also not very maintained. Andrew has been to one lake on that side and it looked incredible. He said it's maybe the worst trail he's ever hiked before though. I'd really like to try for Gray Wolf Lake or High Park Lake someday, but thick forest bushwhacks have kept me scared off so far. Haha. If that sounds like something you're interested in though, let me know! Haha.

Nice @Jackson
I have gone by those mountains many times, including being right by them a couple weekends ago, but have not made it into them.
The pics and all are excellent!
I am keeping them on my list for sure for when it is hopefully not as smokey as it was Friday before last.

Ugly said:
Nice @Jackson
I have gone by those mountains many times, including being right by them a couple weekends ago, but have not made it into them.
The pics and all are excellent!
I am keeping them on my list for sure for when it is hopefully not as smokey as it was Friday before last.
Click to expand...

Yeah we had a really strong dose of smoke that weekend and into the following week, all over the western side of the state. Sorry it had to hit while you were here! Been a good smoke-free summer otherwise. I guess the upshot to July trips with bugs is that you (usually) don't have to worry about smoke! 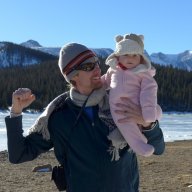 Beautiful photos. Love that sunset shot with all the layers. THis is my first time viewing anything in this mountain range and now it's added to the future bucket list. THanks for sharing!

Wow, that looks beautiful.
And that last shot is just awesome!!
http://yvonnebaurphoto.smugmug.com/

Wow! So beautiful! I have never been a lake jumper in-er haha It made me cold just looking at that picture!
You must log in or register to reply here.
Similar threads