Last week I did an approximately 25 mile loop backpack thru the Lost Wilderness area south of Bailey Colorado with my grandson. The trail first took the Colorado Trail from the Rolling Creek Trailhead southwest up and over the ridge where it intersected the Brookside McCurdy which we took easterly to the Lost Creek Campground. At that point it intersected with the Wigwam trail continuing easterly over a ridge into the wigwam drainage. We then took the Rolling Creek trail back over the ridge back to the Rolling Creek Trailhead. The trail is mostly in a pine wooded area with occasional vistas of the surrounding peaks.

Here is our route:
Click here to view on CalTopo
The following picture is of Lake Wellington which is just east of the hike. We had some time the day before we began the hike to explore the area and found this neat area. 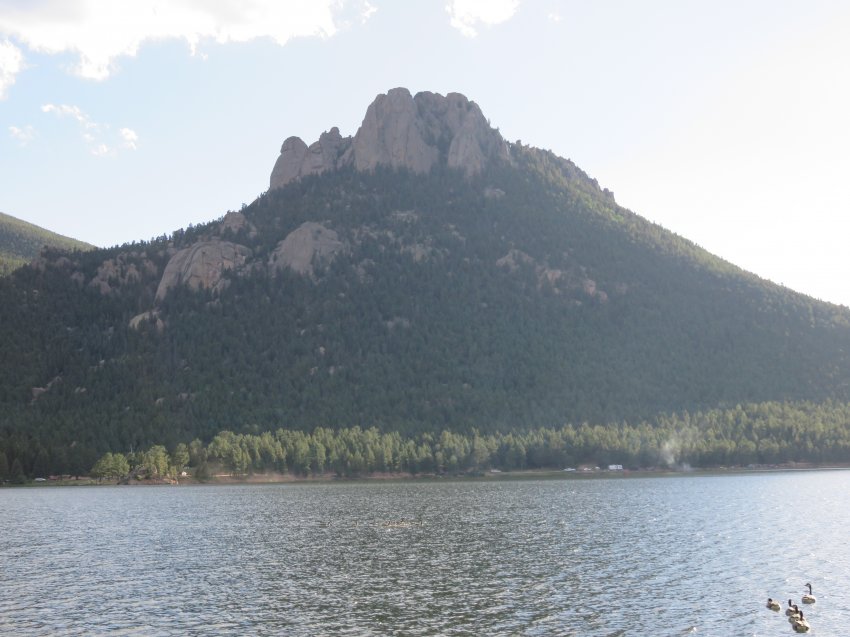 The first 7 or so miles of the loop is a gradual climb become more steep as one proceeds. Much of it is following what appeared to be an old logging road so the walking was fairly easy. There were numerous very small stream crossings along the way most of which had some makeshift log bridges. Here my grandson Garrett is crossing one of them. 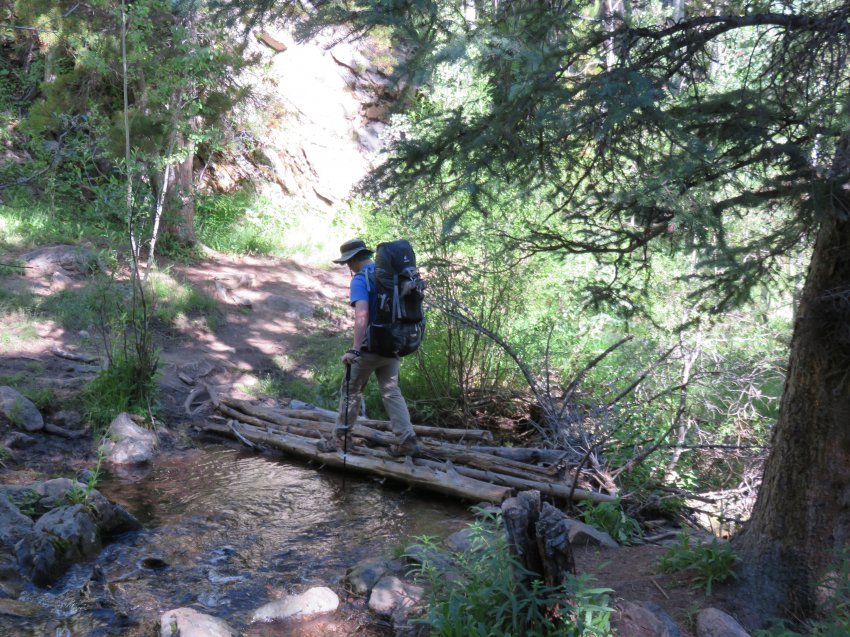 After about 6 or 7 miles the trail crests and descends into the Lost Creek Drainage and them meets the Brookside McCurdy trail which we followed easterly for a couple of miles to the Lost Creek Campground area. At this point my trail description indicated to go right and cross a creek and continue east on the Wigwam. After searching for a crossing we didn't find one and eventually waded across and found a campsite. Doing a bit more exploring I discovered a nice wide wooden plank bridge at the far end of the campground. Oh well wet feet aren't that bad. This is the first night campsite and a view across the valley. 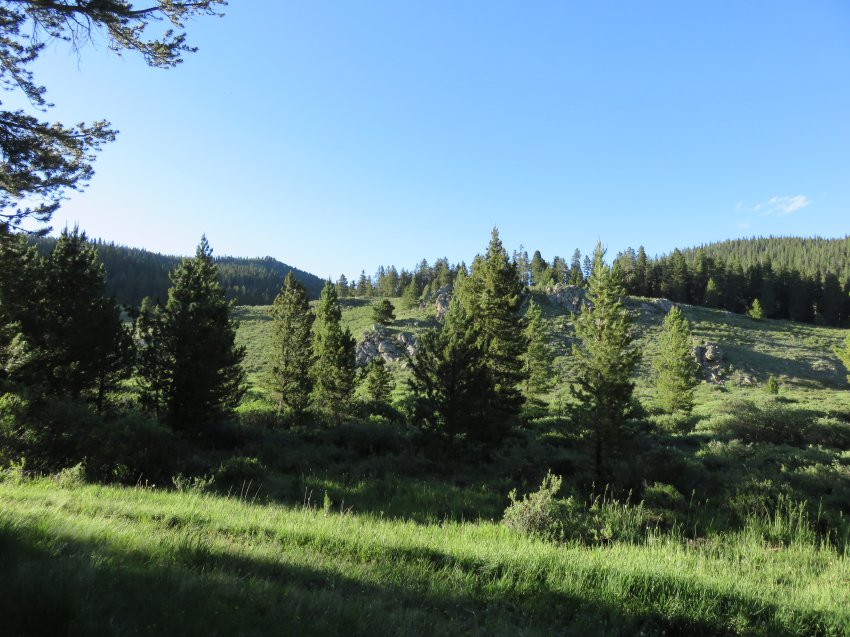 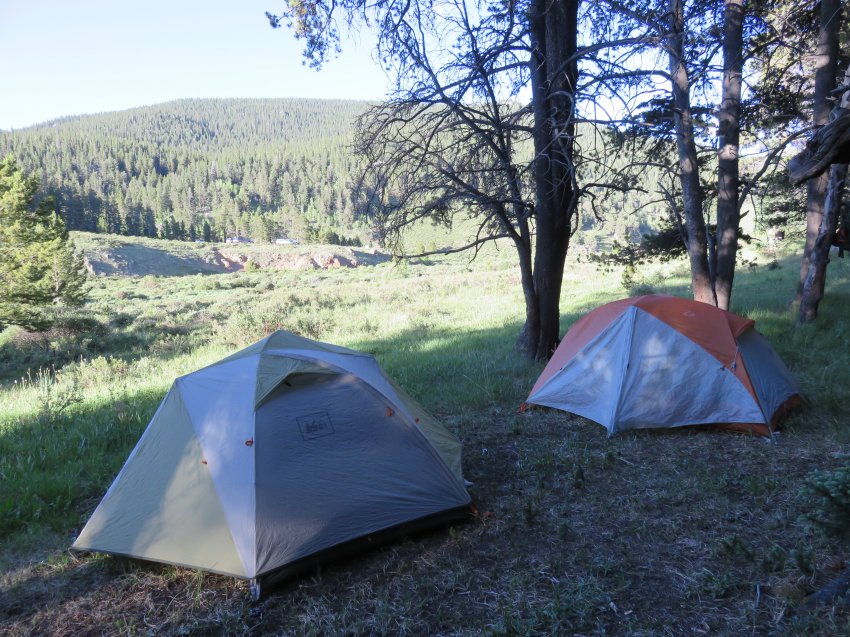 The next day we followed the Wigwam trail over a ridge and down into the Wigwam drainage to where the Rolling Creek Trail intersects. This was an easy day with only a few hundred feet climb over the ridge. There were an abundance of campsites near the trail intersection. Here are some pictures along the trail and campsite area. There were quite a few interesting wild flowers in bloom along the trail. 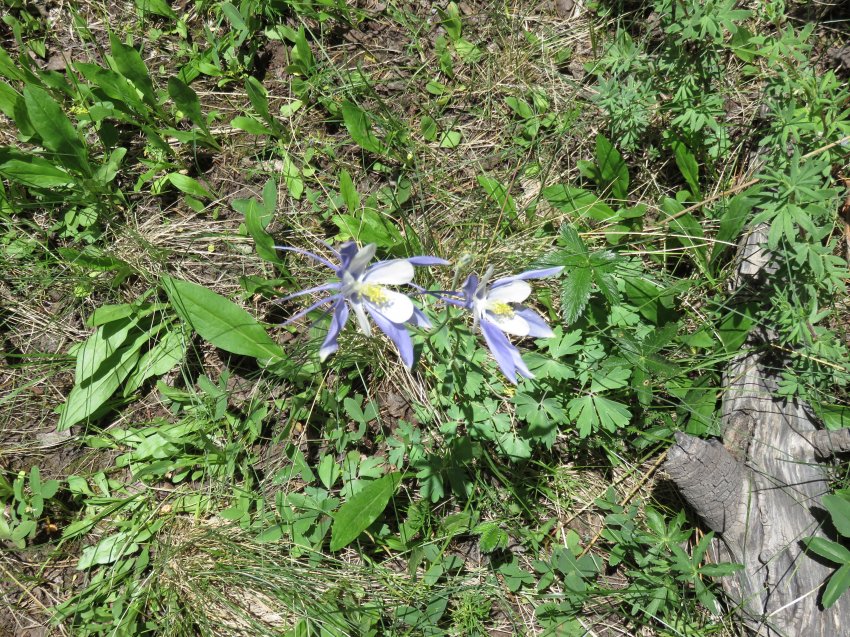 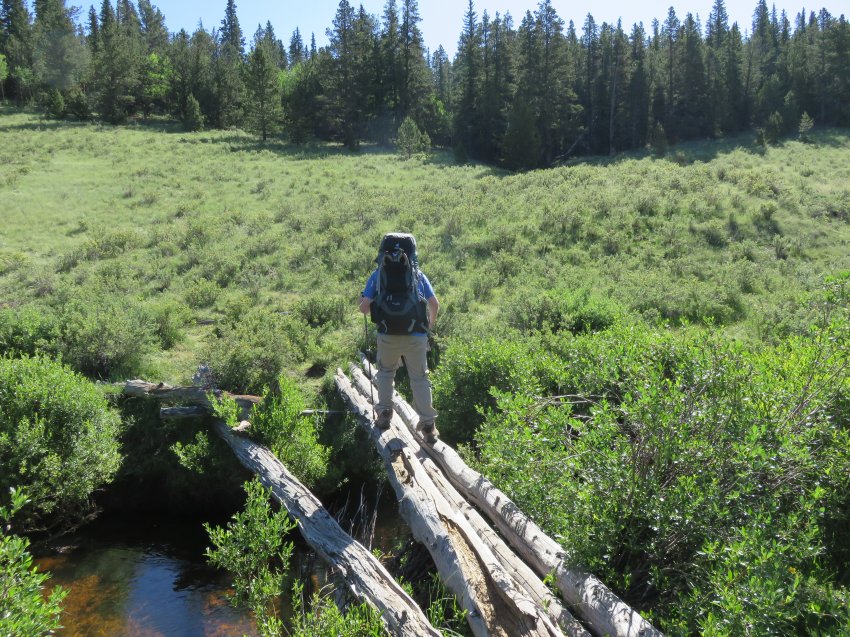 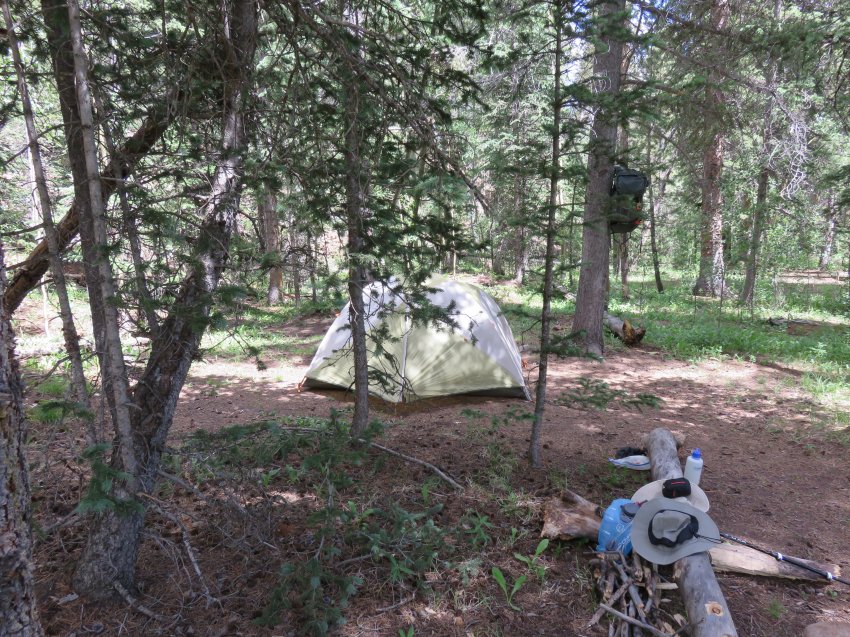 The next morning we took the Rolling Creek Trail back north towards the original trailhead. The night before we were warned by another hiker that the trail was a bit hard to follow, steep and had lots of downed trees. This proved to be correct but the obstacles were not that difficult to overcome. The trail starts out heading very steeply upgrade climbing over 1000 ft in about 1 mile. Then as is the usual case has a reasonably flat area but then descends again very rapidly down about 2300 ft probably in about 2 miles. Keeping ones footing did prove a bit of a problem in places as there were lots of gravel and lose stones on the trail. Also, downed trees continually presented slight detours and obstacles. Overall this leg was the most scenic and interesting portion of the trip.

Small stream along the drainage 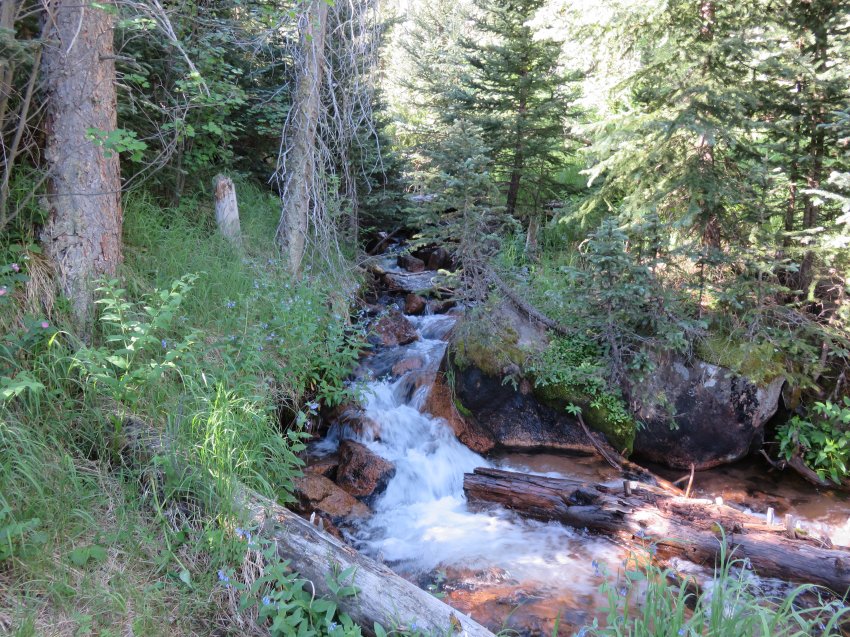 Rock view towards the east 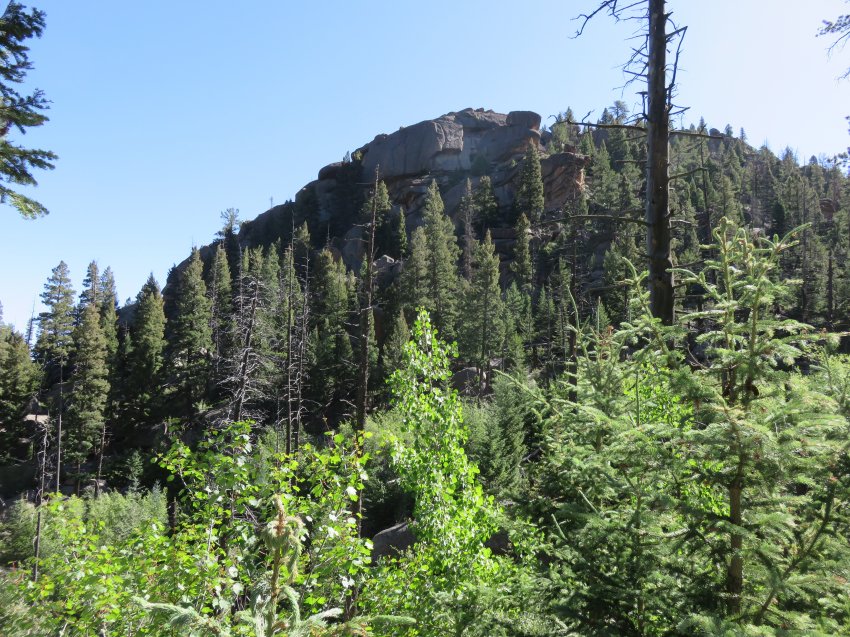 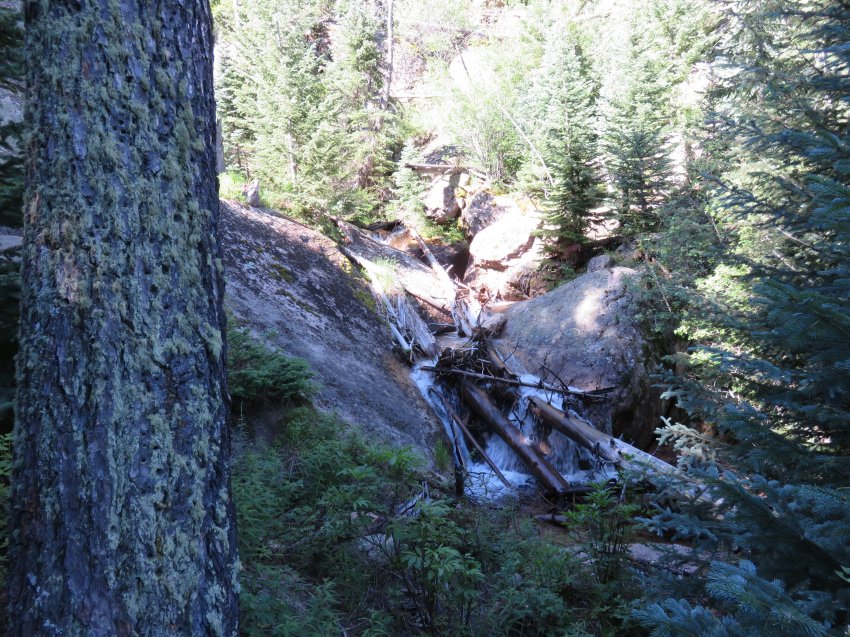 A final easterly look from the trail 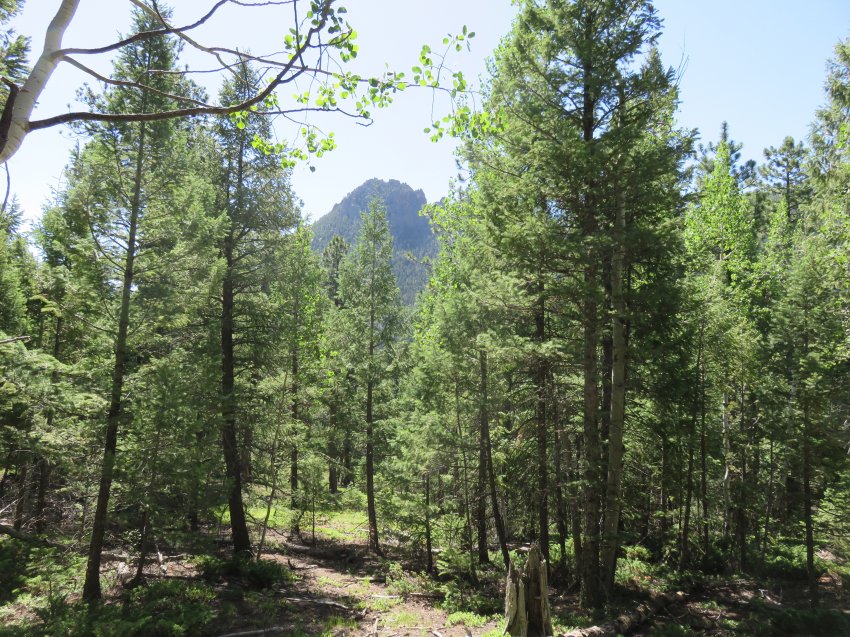 This is a nice fairly simple hike with a few areas a bit more challenging with the obstacles of downed trees and lack of defined trail. The weather was great - a bit chilly at night (had ice on the tent one night) but the days were pleasant and sunny.

For information on this hike simply google for "South Lost Creek loop".