This past weekend, my girlfriend and I hiked the Lost Creek Wilderness starting from the Goose Creek TH and heading counterclockwise to Lost Park CG, McCurdy Mt., Lake Park, then back to Goose Creek via Hankins Gulch.

Click here to view on CalTopo
We flew into Denver from Chicago Saturday morning, rented a car and ended up at the TH around 2PM or so. 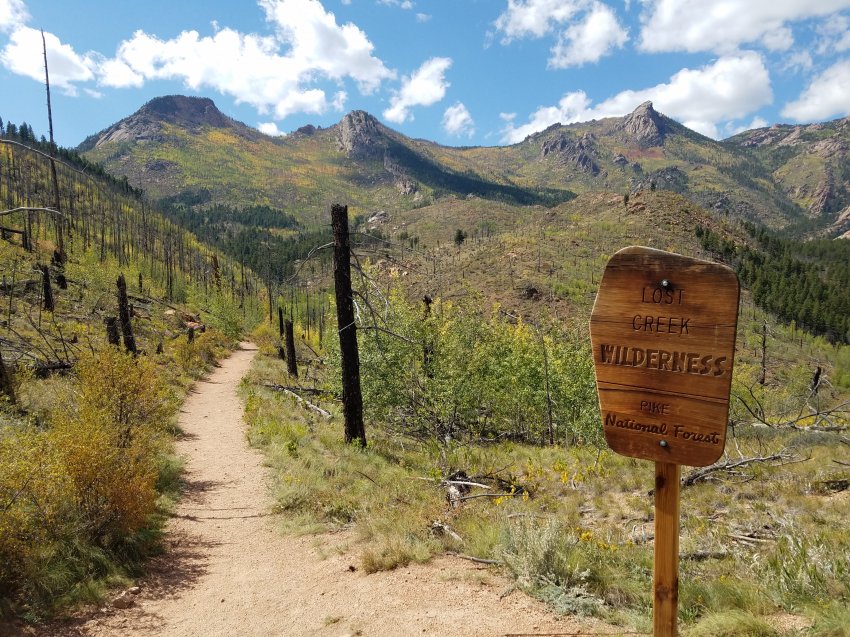 Caltopo puts the route at about 34 miles, and the first day we hiked about 7 miles up to about 10k feet for our first camp. Coming from basically sea level made the first day pretty rough. The first half of the trail was straightforward and basically flat; at about 5 miles or so the trail turns into some pretty rough switchbacks, especially given our lack of acclimation. We found a nice site at about 10k in picturesque valley on the border between Jefferson and Park counties. The fall colors were really coming into their own, and it seemed as the days kept going the colors become more and more vibrant and diverse. 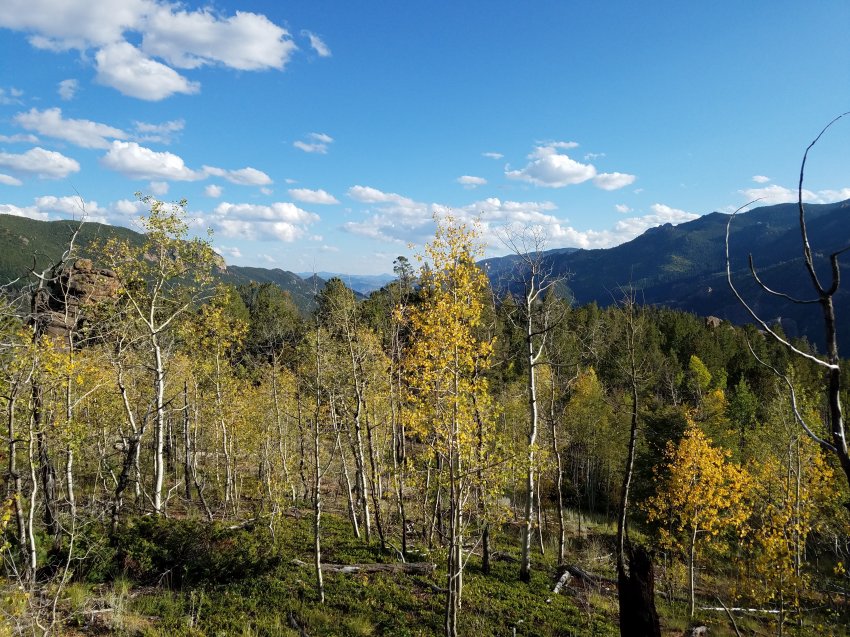 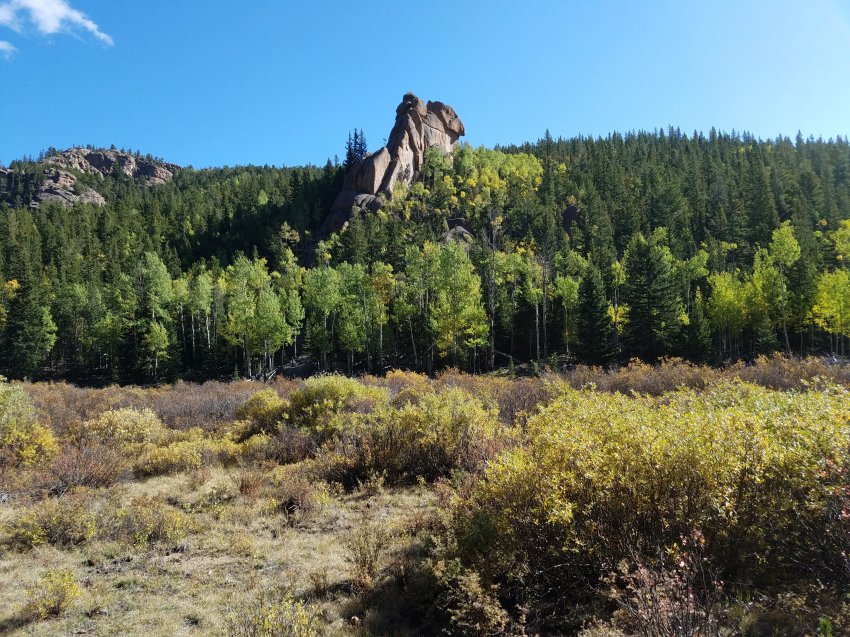 We took it easy the next morning, and had a good stretch and lazy breakfast. Finally we headed north down the drainage towards Wigwam Park. Again the foliage was incredible, and we had fantastic blue skies with scattered clouds making the hiking really nice. It was hot in the sun, but the wind and shade were plentiful making the day generally comfortable. The NatGeo map says there are beaver dams there, but we were already passed before I noticed it on the map. 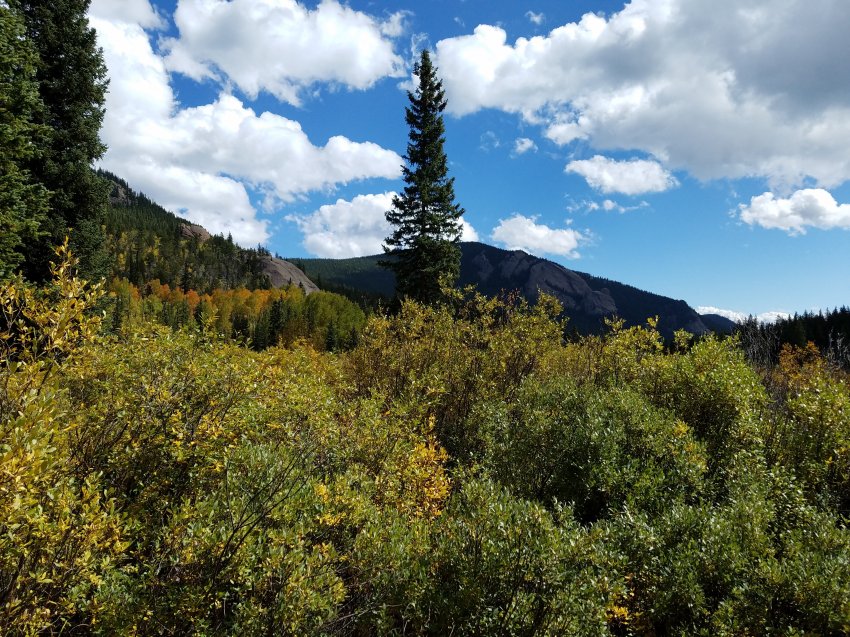 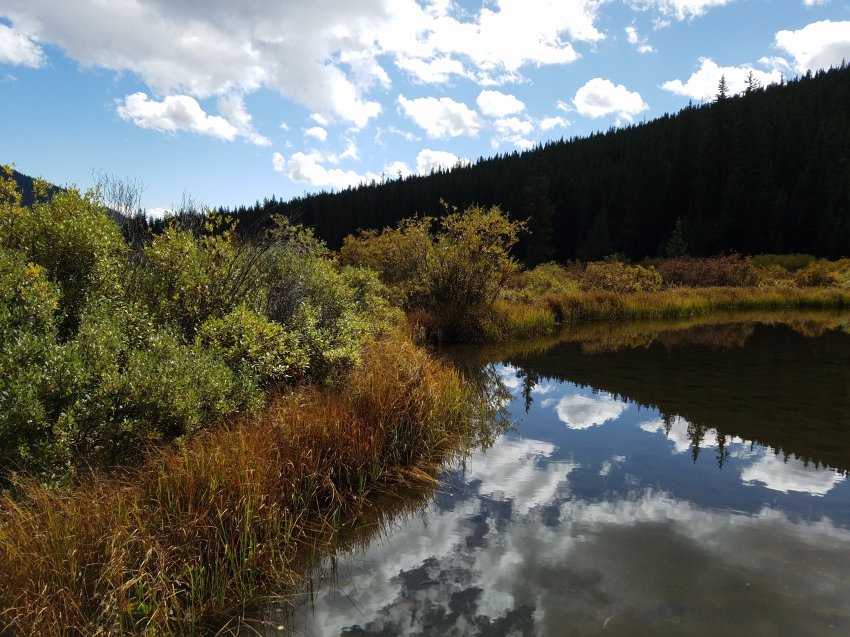 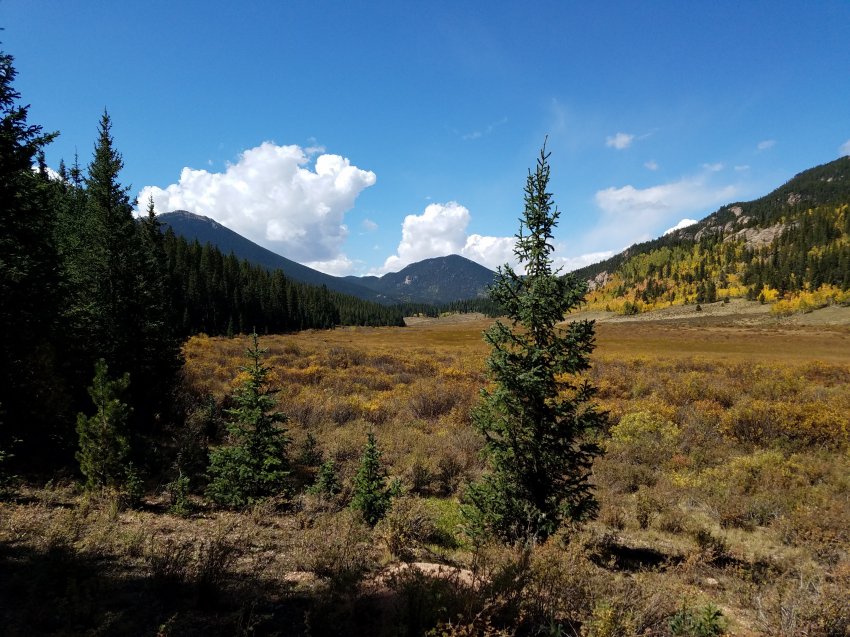 We stopped for lunch in East Lost Park and found the weather to be turning a bit foul, but the system was moving quickly and was small and isolated. East Lost Park is pretty magnificent and I highly recommend a visit.

As we passed Lost Park CG and turned south, we saw the rain pouring down in the distance and coming right our way. We hopped off the trail and bundled up just as the rain and pebble sized hail came down. We enjoyed some Turkey and the storm for about 30 minutes before it cleared up and we took off again. I got turned around and crossed into the west side of Lost Park before checking the map and picking up the trail into the Wilderness Area again. Running out of daylight, a bit frustrated at getting lost, and still a little wet from the weather, we called it a day a few miles south of Lost Park CG on Indian Creek.

The temperature seemed really to drop that night, and I found myself a bit cold throughout the night and the morning, but we eventually got ourselves motivated enough to get going again up Indian Creek towards the Brookside-McCurdy/Ute Creek trail junction. We took the last chance to get water shortly before the junction with Ute Creek Trail, and started the descent towards the pass under Bison Peak.

As others here have pointed out, this ascent is pretty brutal. Tough, steep, long switchbacks is the name of the game, but once you break through the trees, the views to the west and south are astounding. This was our first trip in CO, and I am completely unfamiliar with the ranges around where we were, but we could see quite a few in the distance on this next stretch. 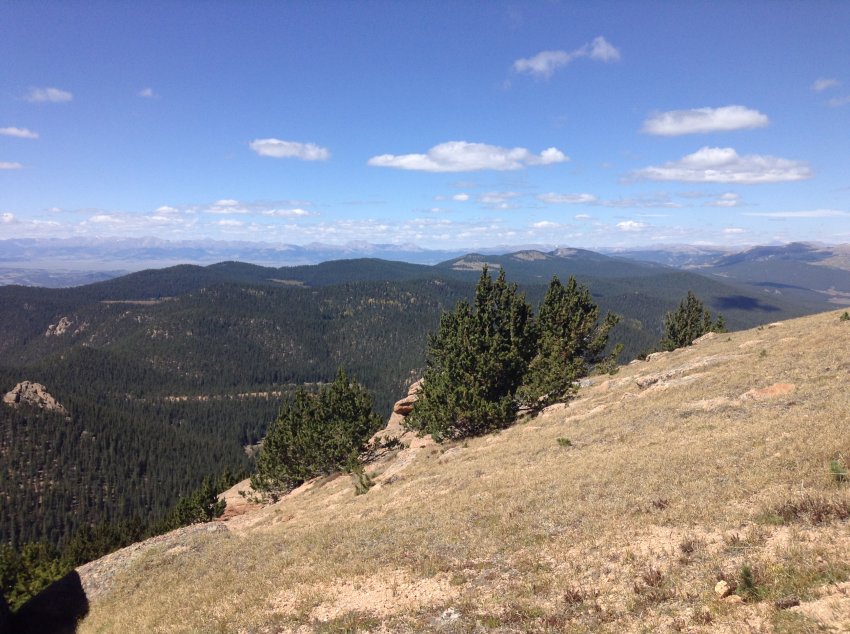 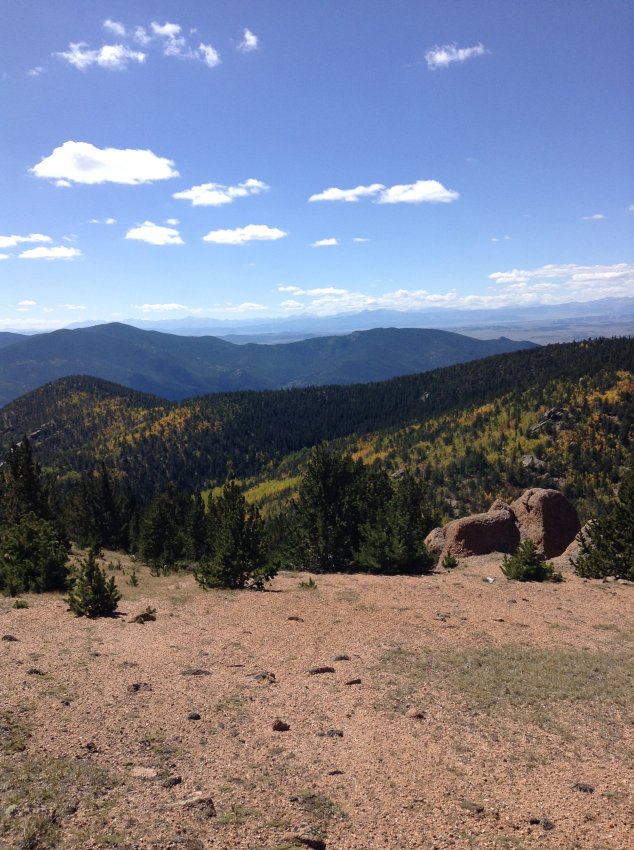 The trail under McCurdy stays at about 11500' the whole way and provides sweeping views. We were a little tired and not super confident in the best way up McCurdy, so we reluctantly skipped the summit and instead just enjoyed the views with a drink and some snacks. It was a good choice, and we had a leisurely descent towards a final campsite, a short walk under the junction with the McCurdy Park Trail. 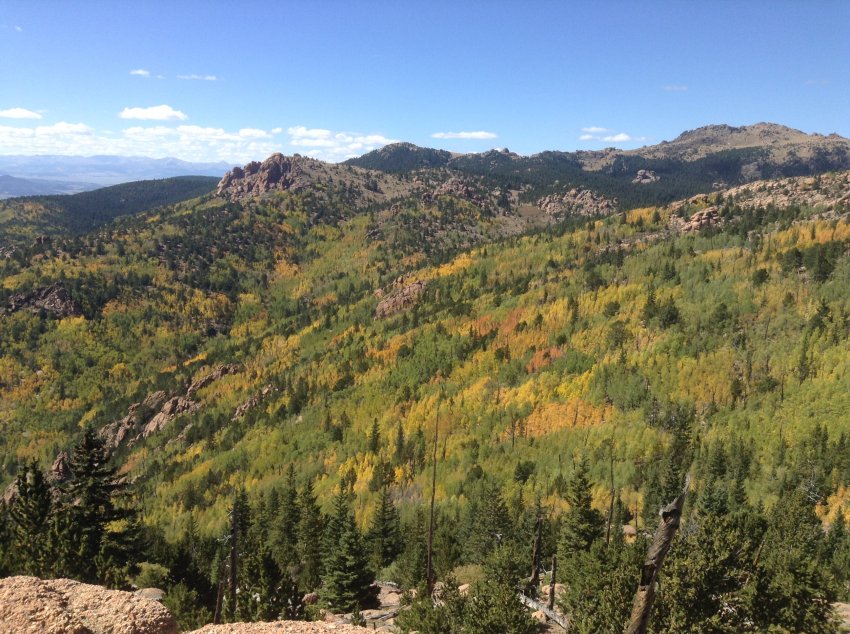 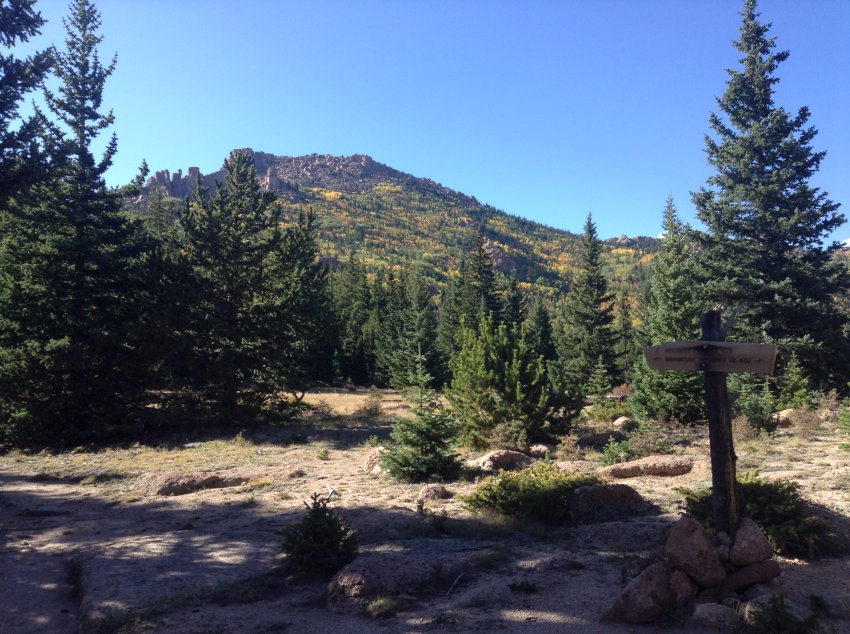 The whole time I was complaining about the lack of wildlife on the trip, which was a bit unfair of me I will admit. The birds and squirrels and chipmunks were entertaining and communicative as always, but I was bummed not to see any large mammals especially given the abundance of willow thickets surrounding the streams. Goose Creek TH had about 30 cars when we arrived Saturday, and still about 8 when we left on Tuesday, so probably relatively high use, which may explain the lack of large wildlife. There were also hundreds of monarch butterflies around, at least we thought they were monarchs. Really quite elegant little things.

My disappointment about wildlife soon abated, however, when I was poking the fire a bit and heard some rustling. I looked up and did a double-take and see a rather large bull moose not 30 yards from me behind our tent. Really beautiful animal with a substantial rack. I think he was surprised to see me too; we made eye contact and I, being calm and cool, said, "Oh fuck, oh fuck, whoa buddy whoa..." and I "slowly" put some distance and a large downed log between us. The big fella really wanted nothing to do with us, of course, and took a short detour down to the willows and the stream, but not before letting out a huff at being inconvenienced. We enjoyed the campfire for an hour or so and talked about our encounter before hitting the sack.

He was just beyond the trees behind our tent. 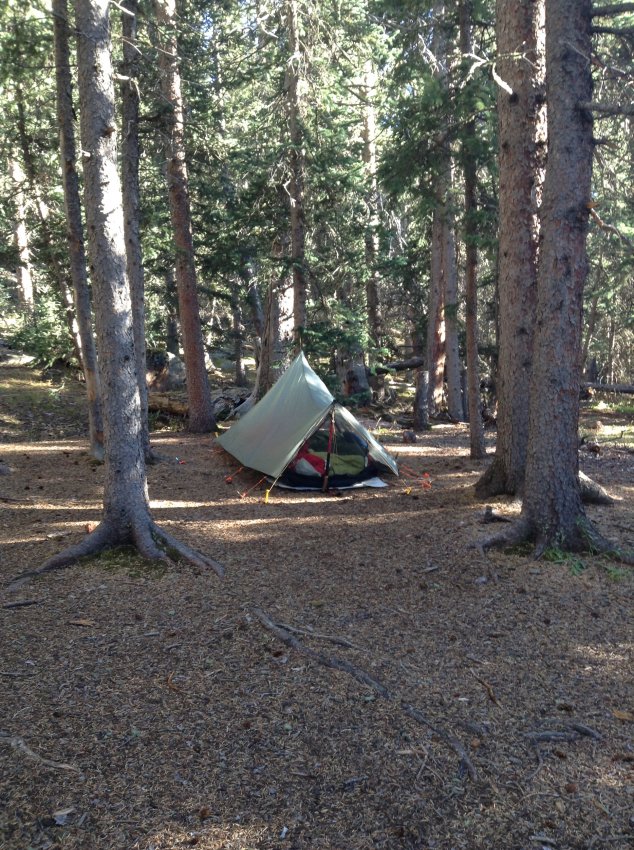 The last morning started out really rough as we headed up the Lake Park trail. The first hour or so was again a tough slog, but eventually gave way to a nearly continuous downhill heading down to Hankins Pass (There is a pair of keys hanging on the sign there, in case you're missing them!). I will note that on the Caltopo auto-trail maker thing, the trail between Lake Park and Hankins Pass is not correct. Plan to use the FS markings; the caltopo one suggests a much more direct path down the slope, but the actual trail is windy with lots of switchbacks, and it seemed like forever until we were down to the pass.

Taking Hankins Gulch Trail all the way back was very straightforward. Some open meadows, some forested area, and quite a few stream crossing with either plentiful rocks or good solid logs for crossing. We were happy to come across a good source of water, and were surprised to find another bull moose enjoying the stream to himself. We turned the corner and he heard us and jumped up the slope a little ways. This guy was younger and smaller than the first one, but still a massive creature. He kinda hung around the slopes near us a little while, munching on some plants and hoping we would leave soon, but we had to pump a few liters to get to the trailhead. Eventually, he just headed up the slope and left us. I feel kinda bad, the guy just wanted something to drink. 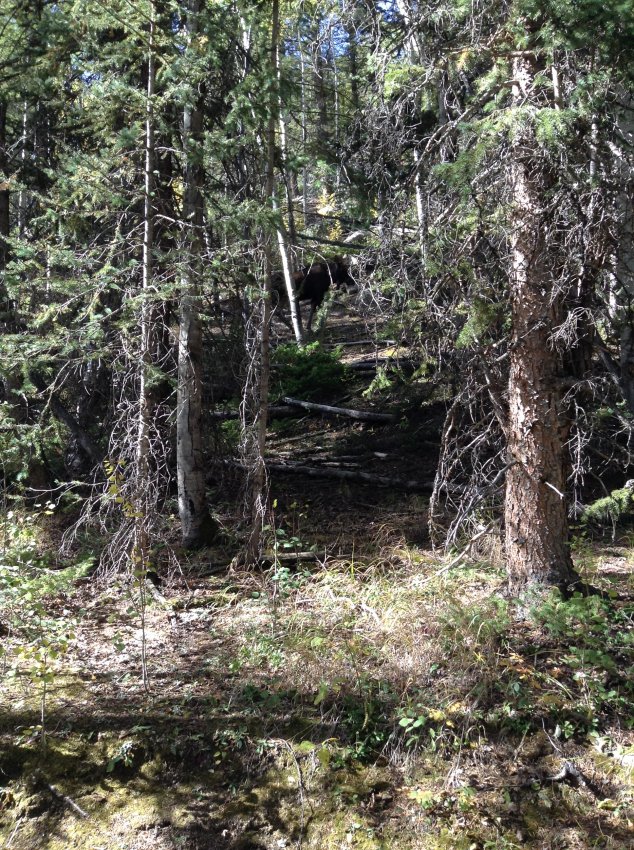 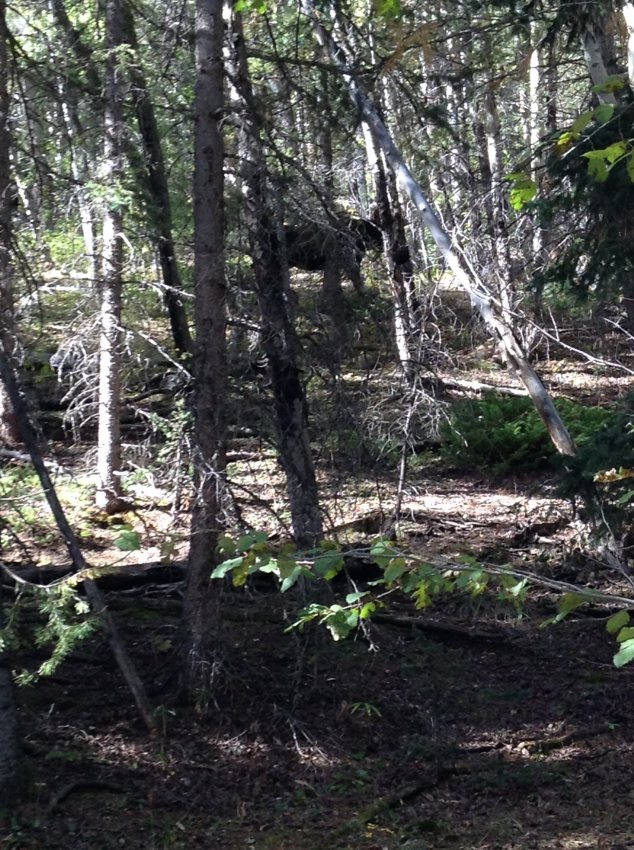 The rest of the way out was easy going, but the Hankins Trail is very enjoyable, and it appears to be not so heavily used as some parts were a bit overgrown, but still pretty difficult to lose track of. Overall the entire loop was very well maintained and clear. Maybe a handful of times we ever had a question about it, including our detour in Lost Park.

The fall colors were absolutely astounding. I did notice a particularly nice section of aspens growing in what appeared to be a burn area. Lots of bare pine poles sticking up among the yellows, greens, oranges, and reds of the aspens. I am thinking of the S/SE slope under point 11647 just south west of McCurdy. The caltopo fire history overlay doesn't seem to suggest anything there though, so maybe I am mistaken about it.
Last edited: Sep 20, 2017
O

Great trip and report... Thanks for sharing! I've only motorcycled thru CO and skied Breckenridge but hiking is on the short list.

outbackwack said:
Great trip and report... Thanks for sharing! I've only motorcycled thru CO and skied Breckenridge but hiking is on the short list.

Sent from my SM-N920V using Tapatalk
Click to expand...

Thanks! This wilderness area was very accessible and not too difficult if you're looking for a first backpacking trip. It's about 3 hrs from Denver, and FS Road 211 provides some great views for about an hour before you get to the trailhead (probably a fun bike ride!). There are also several trailheads around the loop in case you have to bug out at some point. We had no trouble with water the entire trip either. There is also a shorter loop (about 22 miles) that cuts our loop in half. Finally, there is the north side of the wilderness area which we did not explore at all.

I'm around 20 nights in Utah's Uinta mountains and I've seen one deer.

Thanks for posting.
Do not pray for easy lives. Pray to be stronger men. - JFK
Orem Chiropractor
S

I'm around 20 nights in Utah's Uinta mountains and I've seen one deer.

We were blown away really. I figured that the area was busy enough that the large animals were avoiding the trails. There is plenty of off-trail wilderness there they could hang out in. But those drainages have great foliage and are probably heaven for moose.

scoags said:
I figured that the area was busy enough that the large animals were avoiding the trails.
Click to expand...

In part it's because there's so many damn dogs running around (and I say that as a huge dog lover).
Here we find Nature to be the circumstance which dwarfs every other circumstance, and judges like a god all men that come to her.
S

Wanderlust073 said:
In part it's because there's so many damn dogs running around (and I say that as a huge dog lover).
Click to expand...

Yeah i noticed that on your TR from a while back too. There were quite a few dogs there, at least on the weekend days. Really the Goose Creek TH was quite busy when we arrived on Saturday afternoon, and the people heading in before us and after us both has a couple dogs with them.
You must log in or register to reply here.
Similar threads