Spring has arrived in Calgary, with dry singletrack in city natural area parks serving up afterwork mtb rides, amongst the prairie crocus blooming on sunny hillsides. In the Rockies to the west though- winter is still hanging on with a slow transition to a spring snowpack. At this time of year- the Icefields Parkway AKA the Banff-Jasper highway to the north of Lake Louise, is a popular venue for skiers looking to get up high, take in the stunning scenery, and quite likely get in some good turns. It all came together with a tour to "Little Crowfoot" peak on Sunday, April 16. 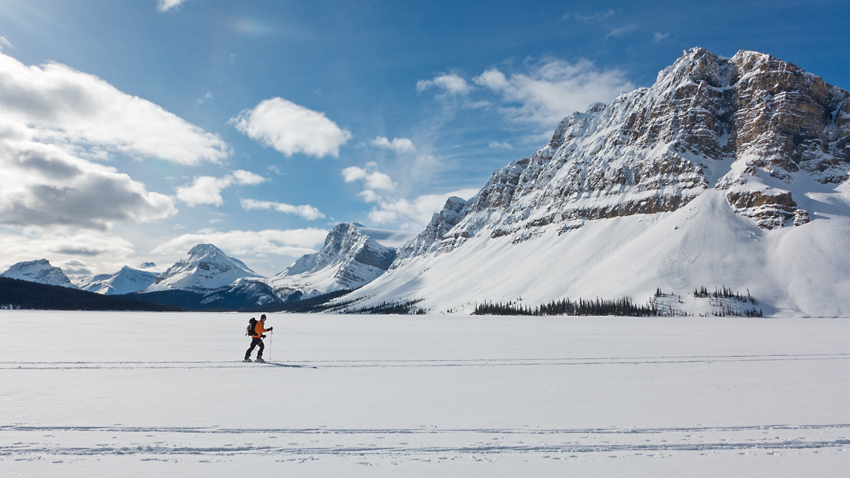 This tour, and several others, starts with a crossing of Bow Lake, about 25 km north of Lake Louise in Banff National Park. 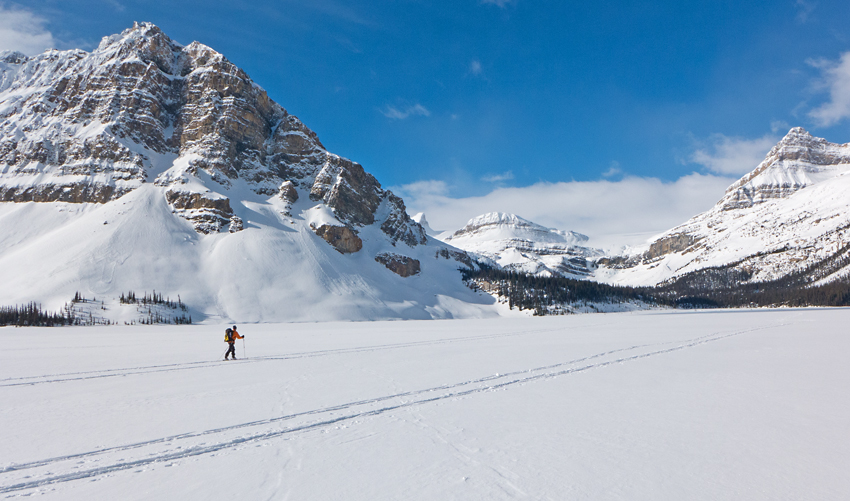 Beyond the lake's end, the horn of Mt. Saint Nicholas peeks out, and a tongue of the Wapta Icefield appears in the distance. 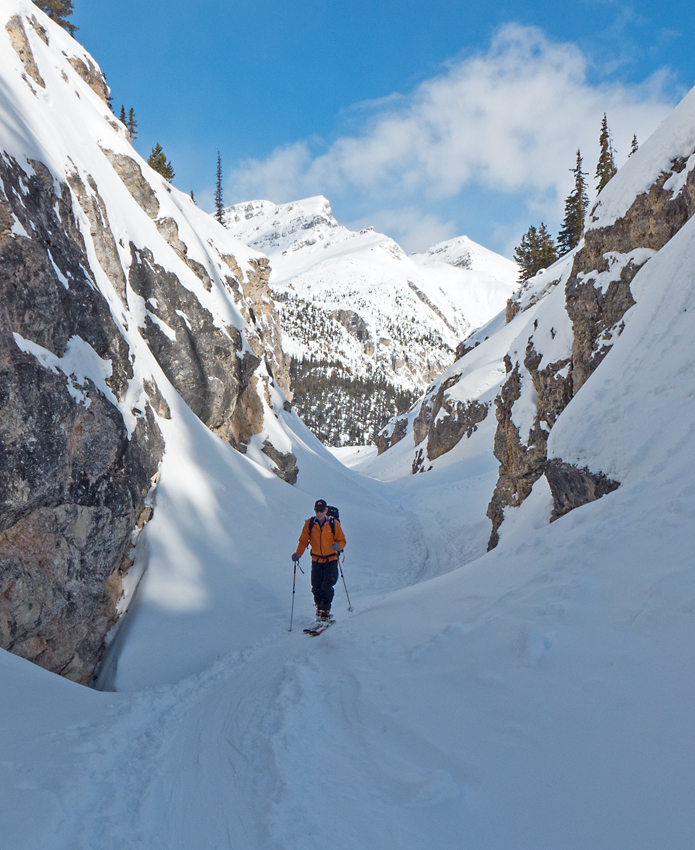 After a few km, a climb and descent, but very little net elevation gain- the winter route enters a narrow canyon. This is also the route to Bow Hut, and one of the main access points to the Wapta Icefield. 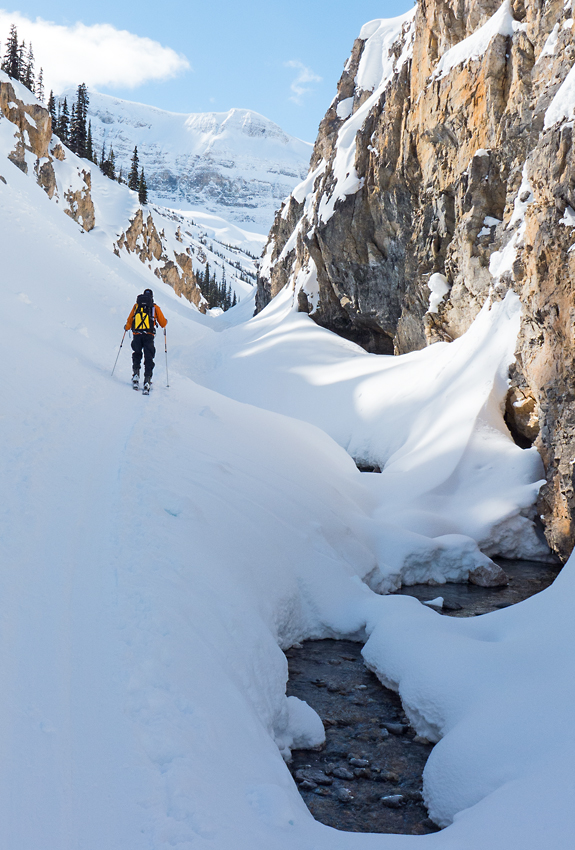 The canyon was unusually well filled in- sometimes it involves narrow traverses on an icy track, perched tenuously above yawning open water! 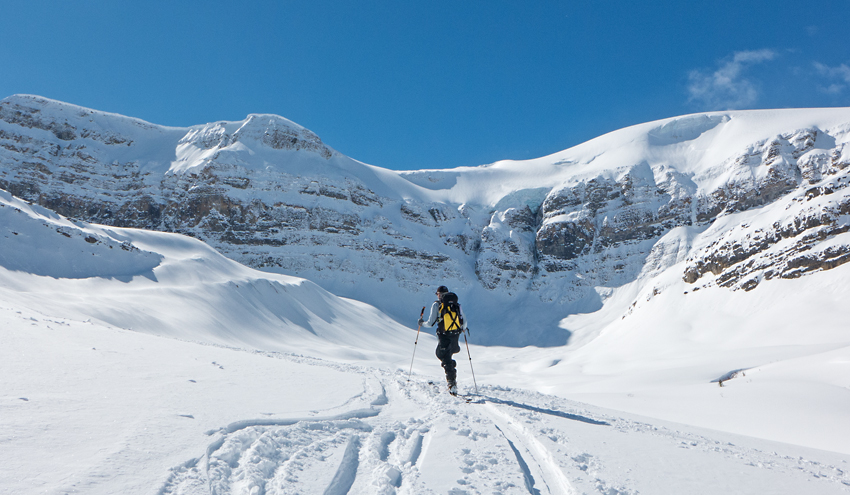 Into the open basin after exiting the canyon. Straight ahead and around the corner to the right leads to Bow Hut. We are going left.... 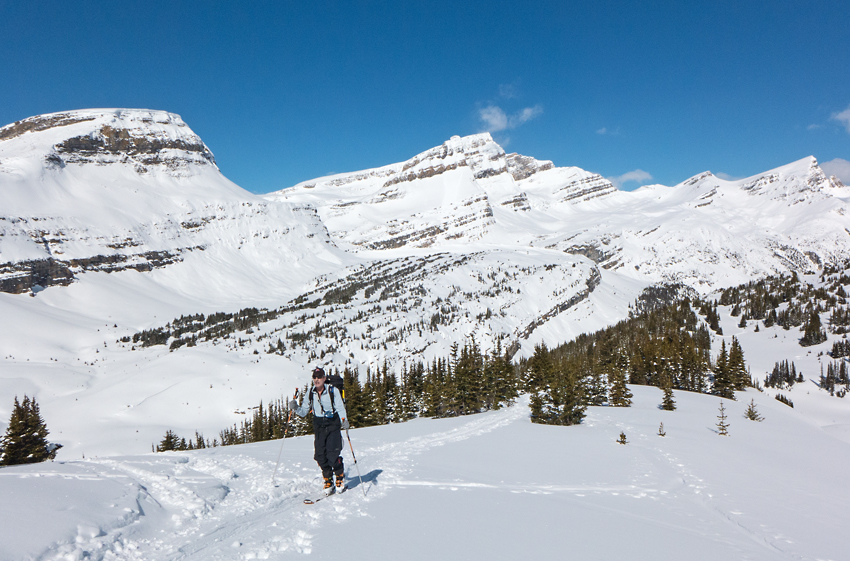 Leaving the last trees behind, as a panorama begins to unfold to the north. 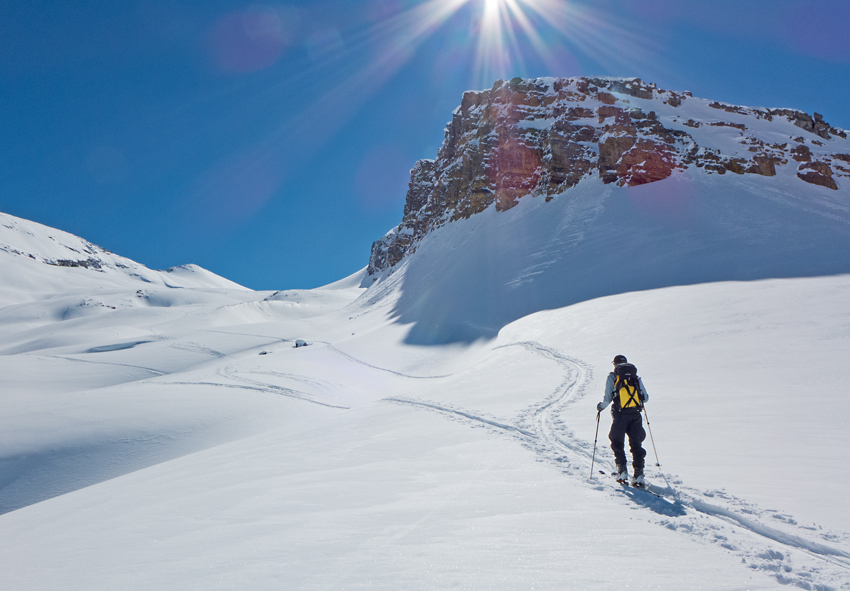 Onwards through moraines and eventually, a glacier. As is often the case- it's much longer than it appears. 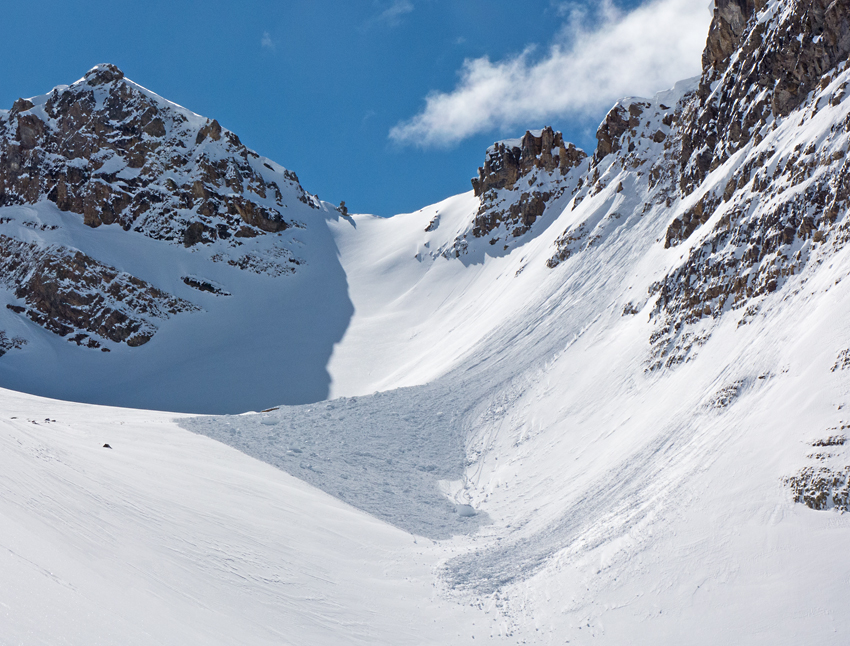 The cornices are ripe and primed, as this fresh cornice collapse induced slide indicates. Those two large blocks are the size of a small car! 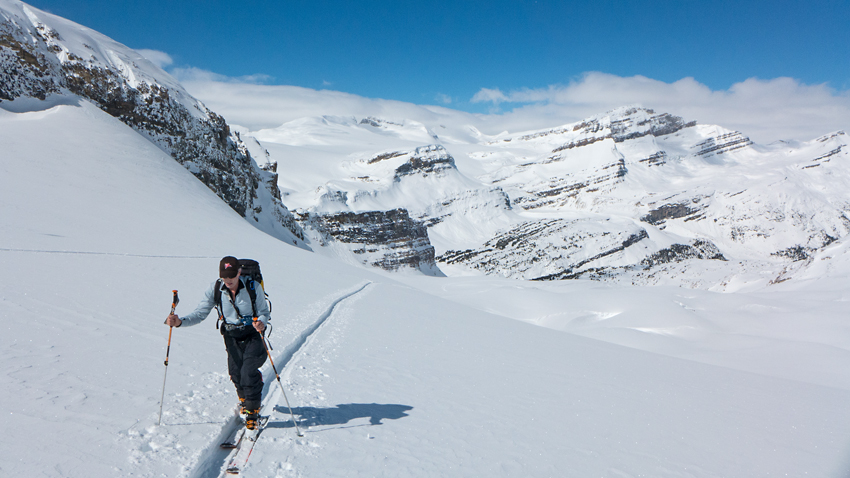 Still climbing- on the small glacier that fills the pass between the main mass of Crowfoot Mountain (a ski/walk ascent, been there done that) and "Little Crowfoot", a sub peak that often offers the better skiing.

Topping out on Little Crowfoot at 2820m. The expansive view north takes in much of the north end of the Wapta Icefield, with Bow Hut far below, visible near centre.

To the south of our summit- a far reaching panorama. This is only about 90 degrees of the view. 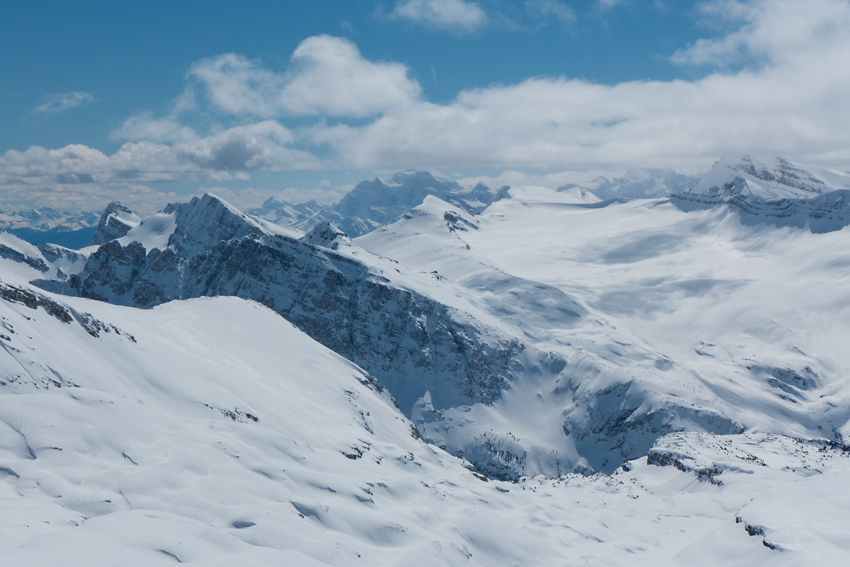 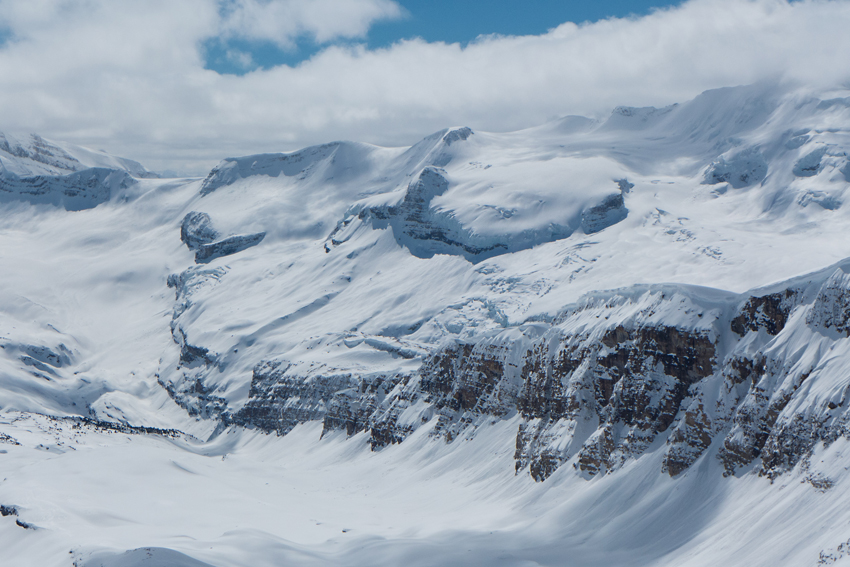 Mount Balfour and it's icefall looms in the clouds at right, above the Wapta Traverse route to the high col. 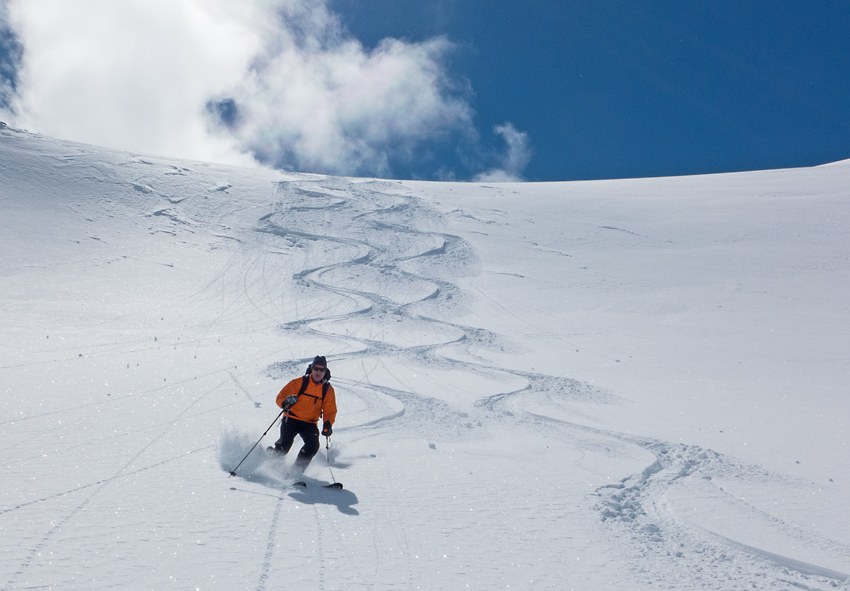 Wind affect had marred some of the recent snowfall on the initial descent off the top, but there was some good skiing to be found nonetheless. 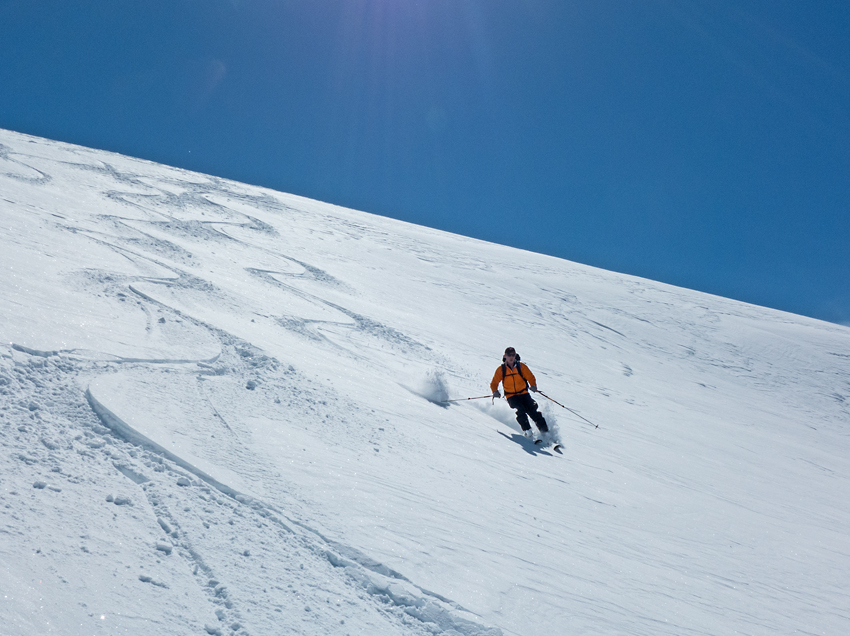 It was well worth skinning back up a second run on the glacier, and skiing another line that offered consistent wind sifted powder. 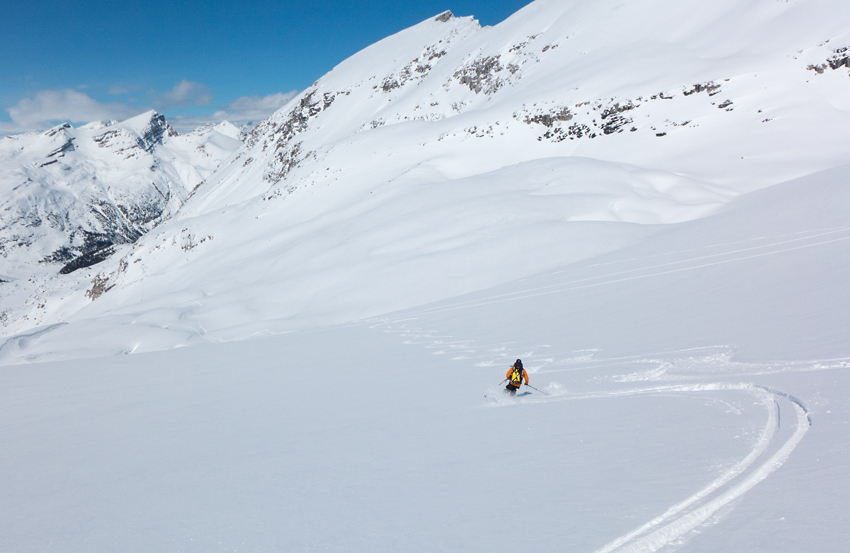 We called it a day after two runs and continued on down into the moraines, finding good skiing in sheltered pockets all the way to treeline, where we transitioned to wet mash cooked up from the dry powder of morning by a hot afternoon sun.

Our exit was easy and fast, as the snowpack remained solid, with no breaking down into isothermal facet wallowing as can sometimes be the case with spring ski touring in the Canadian Rockies.
The homestretch back across Bow Lake towards Num-Ti-jah lodge was a bit of a slog as always- but views across the Icefields Parkway helped to pass the time. Now if only that lodge was open in winter- a cold beer on the deck would have been the perfect end to a great day!
Last edited: Apr 21, 2017
https://steveriggs.smugmug.com

The grass is always greener.....I would be quite happy to be in the Utah desert right now (or even within striking distance for a weekend trip). Feel envy sometimes at the opportunity for pre work dawn patrol powder laps that SLC skiers have. The above tour for instance is a two hour drive each way from home, and the closest backcountry turns to Calgary are usually almost an hour and a half drive to get to.
https://steveriggs.smugmug.com

Love the pictures! That is Beautiful!

SteveR said:
The grass is always greener.....I would be quite happy to be in the Utah desert right now (or even within striking distance for a weekend trip). Feel envy sometimes at the opportunity for pre work dawn patrol powder laps that SLC skiers have. The above tour for instance is a two hour drive each way from home, and the closest backcountry turns to Calgary are usually almost an hour and a half drive to get to.
Click to expand...

There are reasons I returned and stayed here for sure... but the childhood and later early adult trips to Alberta and other parts of Canada remain very dear to my heart.
You must log in or register to reply here.
Similar threads