Labyrinth for the first time!

All right Y'all, my wife and I are planning a trip down Labyrinth April 28th to May 3rd. Four days on the river and a couple of leisure travel days. This trip is a big one. We are celebrating my graduation from Grad school and, MOST importantly, our daughter's first birthday! We are very excited. Now a little background before the I ask for suggestions. We are experienced backcountry travelers and rafters(I really need to add some of our trip reports). As well, we have all the gear necessary (we think). But there are a few things I would like to know. We have never done this section of river and although I've read the few Labyrinth TRs from BCP what specific things can Y'all tell us to plan for? Fires? Dogs? Camping? Weather that time of year? The gear you would suggest? The gear you would NOT suggest? Groover? Other little things I haven't thought of yet?

We have some family coming down from Alaska to run it with us and get some long forgotten sun. Thank in advance for your replies and graciousness.

Where are you putting in? The following assumes you will be starting at Ruby Ranch.
Are you on a raft, canoe, barge...? I made my groover out of 4" PVC with screwable caps on each end. I have never floated in April, but the rest of the area can get pretty windy, so adjust your mileage times. Lows in the upper 30's maybe, highs around 75? I would explore trin alcove bend thoroughly if I was going back. Lot's of stuff to see (in nearly all of the side canyons- explore!) and you have plenty of time. Ice: I freeze 1 gallon (or 1/2 gallon) jugs for cooling in the coolers, bring some ice cube bags for drinks. Use 1 or 2 master coolers (group/boat size?) that are only opened up once or twice a day. Use smaller coolers for stuff like lunch and beer etc. I use a sheet of foam insulation (an old sleeping pad I had) and place it below the cooler lid, duct tape the lid closed when not in use. 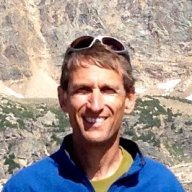 I would say the gear largely depends on the type of craft you are taking - are you going by raft, canoe, or kayak? I'm assuming you are familiar with the regulations. You will need a groover of some style, a fire pan, extra paddles. On the groover, you can buy, rent, or make one. Last time we took a group, we fashioned one from a 5 gal bucket with gamma lid, but you can use ammo cans, commercial outfit, or PVC setup like Greg discussed above.

I've never run it this early in the year, but I would be very aware of the weather forecast. Because the river is so slow through this area, if there were high winds upstream, which is common, I would just plan a day exploring rather than fighting the wind. Since there is so much overgrowth on the banks of the river, sometimes finding and getting into appropriate camps can be difficult, so I would advise searching out a campsite earlier in the day rather than later.

I would recommend a minimum of four days if you want to explore at all - and I would highly recommend exploring the bowknot area, trin alcove, ten mile canyon, and any other spot that looks interesting!

Thanks for the response @Unimog and @gnwatts. We are putting in at Green river state park and using Redtail aviation to run the shuttle cars. we have a 14.5" raft with centerframe and all the works. We have ammo cans as groovers (and a nicely rigged toilet seat to avoid the grooves). We do exactly what you said about the frozen water jugs. It's makes so much sense rather than buying block ice from the store, especially because you can drink it once it's thawed. Also good idea about the duck tape and sealing the coolers. My wife did that when she ran the grand canyon. We do have a fire pan but can you have fires? Great advice about the bank vegetation we will definitely be finding a camp early and hopefully avoid the inevitable afternoon winds.
We were also thinking four days. We'll put on the river Tuesday and plan to be off Friday or early Saturday.

Thanks for the heads up about the places to explore. It seems like Trin alcove is the number one and the rest are a close second!
Any other suggestions now that I've given a little more information will definitely be appreciated.

We are doing the same trip the week after you. If your dates get bumped, you're welcome to join us.

texsriverways has a great FAQ page about the regulations of this section.

You can have fires in a firepan, you just need to carry out the ash. There should be plenty of dead wood available.

sixstringsteve said:
We are doing the same trip the week after you. If your dates get bumped, you're welcome to join us.

texsriverways has a great FAQ page about the regulations of this section.
Click to expand...

Definitely would love to join some fellow BCPers. We have family coming in from Alaska so our dates are all but 100% if you know what I mean. That doesn't mean we shouldn't do it some other time though. Have fun on yours.

Unimog said:
You can have fires in a firepan, you just need to carry out the ash. There should be plenty of dead wood available.
Click to expand...

Thanks @Unimog we were wondering about the availability of firewood but if you say there's plenty I'll take your word for it.

On Firewood, I meant drift wood, not just dead wood. There might not be any in camps, but if you keep your eyes open, you should find a plentiful supply along the way.

Unimog said:
On Firewood, I meant drift wood, not just dead wood. There might not be any in camps, but if you keep your eyes open, you should find a plentiful supply along the way.
Click to expand...

thanks for the clarification. I'll keep my eyes peeled and a little room on the raft to pick up plenty for brats and s'mores!

I ran it in April last year and the weather was perfect. Flows will depend a lot on whether or not Flaming Gorge releases have picked up as well as how high the Yampa is running. Expect a lot of paddling.

ashergrey said:
I ran it in April last year and the weather was perfect. Flows will depend a lot on whether or not Flaming Gorge releases have picked up as well as how high the Yampa is running. Expect a lot of paddling.
Click to expand...

Thanks for the heads up on the paddling. I expect to do a lot due to the 1 year old on the boat.
You must log in or register to reply here.
Similar threads