As I mentioned in this thread, I recently acquired a 22-foot pontoon boat. I don't take delivery on it until later this month, but I'm working on getting everything I need to get it rigged and ready to hit the water. One of the biggest issues I'm trying to figure out is how to attach kayaks to the boat without doing any permanent damage. I'd love any input/ideas from anyone out there. Judging by what I've found online, no one seems to have ever mounted a kayak to a pontoon. LOL.

The boat is a Bennington 22 SLX. It's 22-feet long and 8'6" wide. The added weight of the yaks shouldn't be an issue, but there definitely isn't room to carry them in the boat, so I'm thinking they're going to have to be mounted on the outside rails. I'd like to figure out a way that doesn't involve drilling holes in things and most definitely a way that won't scratch the crap out of my boat.

Here's some pics of the outside:

Port side: That's a door half way up, but I wouldn't be against obstructing it to move yaks. One of the problems I'm facing is that the upper rail is snug against the seating in the boat so it's not possible to wrap things around them. The bars going down might work though, and they would be plenty strong. 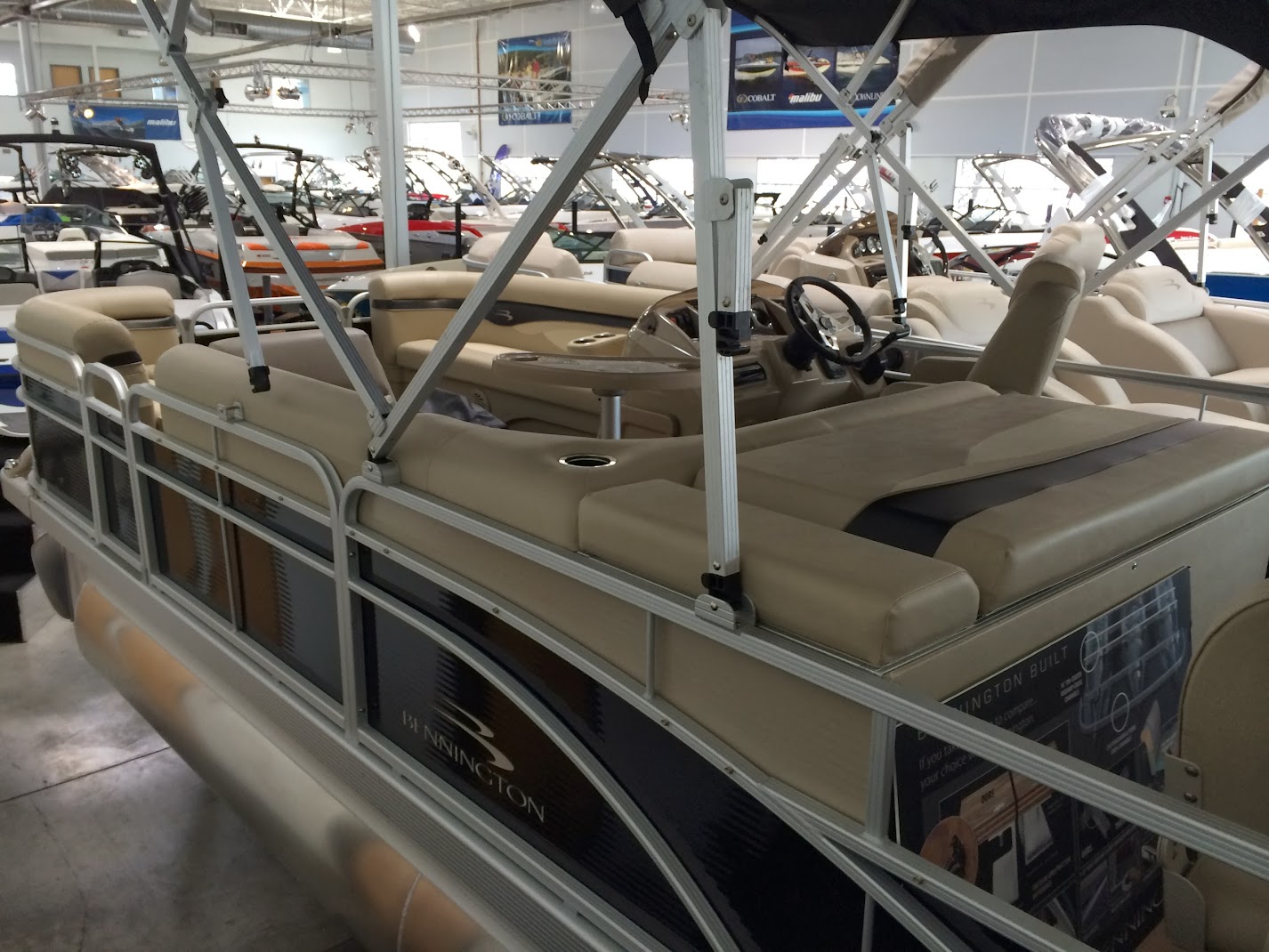 The starboard side does not have a door on the side but I failed to get a good picture of it. You can still see pretty well in this one from the dealer though: 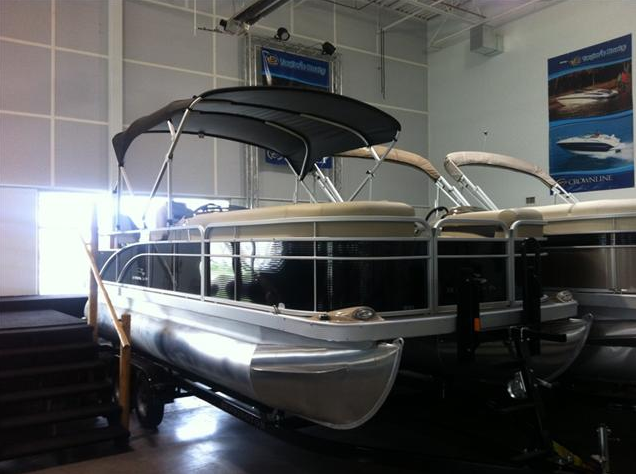 And this is the layout with the doors marked:

The best plan I've come up with so far is to take ratchet straps and several of the cheap blue foam camp pads and just strap the yaks to the sides onto the vertical bars between the top rail and second rail. I figure I can cut the camp pads into smaller pieces 2-4' long to go between where the yaks and the boat meet. Think that's going to protect my boat or might it still rub things to the point of damage? If that works, it seems like I could put a sea kayak on each side and maybe even put my 10' sit on top kayak across the bow.

Am I high to think this might work with just straps and pads to the rails? What am I not thinking of? Having the cockpits out like that could run the risk of water getting into them and weighing them down, so a cockpit cover of some sort may be needed. Or depending on the curve of the boat, maybe just flip it around and put the cockpit opening in.

Any input is much appreciated.
IG: @backcountrypost

The other possibility I was looking at was some sort of kayak wall mount but it would have to be removable to keep the boat from becoming too wide to tow safely down the road. It also probably wouldn't solve the potential damage of kayaks rubbing up against the boat exterior and doing damage. 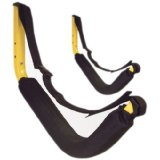 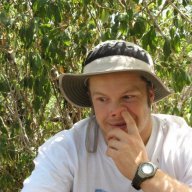 definitely, foam pad and ratchet to sides like your diagram. but i would try flipping them cockpit inwards (to keep water out) and hang the curve of the kayak out past the rear of your pontoon a foot or so until the middle of the kayaks are flush enough to ratchet. make sure you always have a friend on board drinking beer to monitor the process ; )

You think the blue foam pads are going to be sufficient? I was just thinking that we could use those really thick 3-4" foam pads and then they'd be around to lay on after setting up a base camp.
IG: @backcountrypost

ya 2 on the front curve. but i would put 2 side by side with your diagram above to fit 4 before i'd wrap them around the front. but maybe wrapping around the front could help out on wind? but for foam, i would recommend a thermarest-like closed cell pad instead of the 3-4" hospital foam pads because those thick ones soak up water like a sponge. ? all trial and error. Any names yet for your new yacht. ??

Ohhhh yeah. Those thick pads would soak up everything. Okay, closed cel it is.

No name yet... would love any suggestions. Feels weird to not have a name for her.
IG: @backcountrypost

does it get any cooler than a pontoon boat with kayaks strapped to it?

I realize this topic isn't really applicable to most, but in the interest of being informative to anyone who happens upon this thread down the road....

I tried simply mounting the kayak to the side of the pontoon with ratchet straps and a closed cell foam camp pad to protect the boat. It worked great, my only complaint is the ease of getting it in and out quickly. So much so that I think I'm going to try to rig something else up with the wall mount hooks mentioned above. I really want to be able to just drop the kayak in the water at a moments notice without fighting dangling straps. But with that said, it worked nicely. 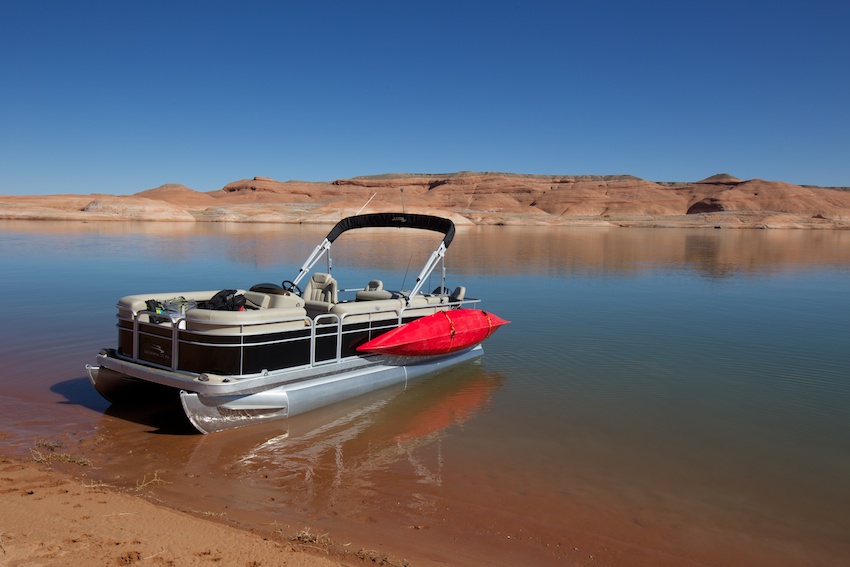 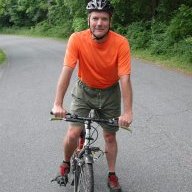 Are you serious!!! You got a effin' pontoon boat. Last I remember you were talking about an ultralight raft.....I don't the pontoon is ultralight. Then again what do I know.

baltocharlie said:
Are you serious!!! You got a effin' pontoon boat. Last I remember you were talking about an ultralight raft.....I don't the pontoon is ultralight. Then again what do I know.

What, you mean I won't be able to portage this from lake to lake by dragging it up the trail? Crap! I was trying to talk my wife into letting me buy a packraft and she said I had enough boats and she wanted one that would be better for her and the dogs to come on trips with. Next thing I know, we have a pontoon boat. I'm about to post a TR from the maiden voyage over the weekend. Good times.
IG: @backcountrypost

Did you motor down to the Escalante arm?

ashergrey said:
Did you motor down to the Escalante arm?
Click to expand...

Nope. Just stuck close to Bullfrog due to the time we had. Trip report here:
http://backcountrypost.com/forum/threads/halls-creek-bay.2854/
IG: @backcountrypost

What is your mpg or gph is better for the marine life? Cruising speed? Just trying to figure out whether we can get to West Canyon without auxiliary tanks like the F16's carry....
Art

Hehe. The cruising range and efficiency were some of the biggest appeals to me for this type of boat and motor. It's just a regular 90 hp outboard, not a big inboard power boat engine for wakeboarding, etc.

It's really tough to say without more experience with lots of people and gear on board, but I figure with a heavy load I should be able to do around 9-11 mph at about 4.5 mpg and 3500 rpm. That sounds slow but it actually feels like a nice speed in the boat if you have a comfy chair and eye candy around. Much faster and it starts to get too windy and uncomfortable to have conversation, IMO. At that efficiency, it would take about 13 gallons of gas and cost around $50 to go out to West and back from Antelope Point. If the Castle Rock cut is open, Wahweap would be about the same. My main tank is 27 gallons, so no supplemental F16 tanks would be necessary.

Towing it down there is another story....
IG: @backcountrypost

Nick said:
Towing it down there is another story....
Click to expand...

My wife is eyeballing your Tundra as a replacement for our beloved-Taco. Thanks, buddy

So, what has your experience been in gas usage?
City:
Hwy:
Towing the Boat:
Art

To be honest, I've never really tracked it, but now I'm curious and I will do so and get back to you. I'm betting I get worse than your average Tundra though, because of my BFG A/T tires with the Rock Warrior package. I think we sort of roughly tracked it on one of the first trips and I got like 13 mpg. On my Taco, I think I was getting more like 17mpg with BFG A/T's. Keep in mind, I drive kinda fast.

One thing I noticed towing the boat is that if I put it in Tow/Haul mode it really sucks gas down and keeps rpms way too high. I think maybe it is better for towing much heavier loads than my 3500 pound boat. I turned it off for most of the way home and fuel efficiency was much better than on the way down.
IG: @backcountrypost

Here is what we get, on average, from our Taco, for comparison

I'd guess you are right about your Towing mode keeping the RPM's too high. It is probably meant for at the towing capacity limit. What is your max? 10k# ?
Tire type probly doesn't matter much but weight and diameter do. Unsprung weight and, especially, rotating mass have a dramatic effect on energy (gasoline) like several times the effect of say body mass.
Art

Art - you guys get great mileage in your taco. I don't think I ever got better than 19 when I had mine. That may have something to do with how I drive though. I do think I had a drop when I went from the stock BFG Rugged Trails to slightly larger BFG A/Ts. Sounds like the oversize part of that equation may have had more to do with it though.

So I think I kind of figured out my towing MPG with the boat. Pretty sure I got something around 9mpg with it in tow/haul mode pushing the RPMs to excess. I'm hoping it'll be more like 11-12 when it's not in tow/haul mode but I need to go on another trip before I can prove it.
IG: @backcountrypost

> Sounds like the oversize part of that equation may have had more to do with it though.
Yeah, from memory I remember that accelerating 1# of rotating mass on a vehicle (tire) down the road is the equivalent of accelerating 2.5-3# of non-rotating mass (like a new winch). It might be even more - if I wasn't such a lazy out-of-practice engineer I'd calculate it.

I've ridden with you. I KNOW it has more to do with how you drive

Last edited: Mar 4, 2014
Art
You must log in or register to reply here.
Similar threads