I'm sure that we all have a story of a good trip gone bad. Whether it be getting stuck in the mud, wind blew your tent away or squirrels ate your lunch. Here is my story... I hope I'm not the only one...

Last May my son and I headed down to Coyote Gulch with a couple friends. I had to work that day on top a violin, piano, and guitar recital my kids were doing. It was 9:00 P.M. before we headed out on our 9 hour drive. We ended up getting to Devil"s Playground about the time the sun was coming up. Met up with the other half of our group and headed right for the gulch ( No time to sleep we had country to see.)

We headed down 40 Mile Ridge Road witch seemed to go on forever. Not sure if it was the previous nine hours in the car that made it seem longer? We finally arrived at the water tank loaded our packs and headed out. We dropped in at Jacob Hambin Arch. I will say that I hike with my teen-aged son and he's crazy hungry all the time. So my pack is loaded heavy with snack food. In fact a gallon sized bag of granola bars, trail mix and the like.

Tents up, day packs loaded and off we go exploring. We headed down the canyon to see Natural Bridge. This was my first time in the gulch. It really is one of the most beautiful placed I have ever been. Well after a hundred or so pictures and a few hours later we made it back to our camp site for the night. This is where it all goes south.

Apparently the sand bar under the alcove is crawling with squirrels. These aren't your average run of the mill squirrels these fat bastards look like they have been juicing for years. All of our packs had been raided by the spawn of Satan. Remember that gallon sized bag full of snacks that I mentioned. Well it was gone all gone. What the squirrels weren't chewing up or hiding. The crows were hauling off. So that night for dinner we had a oatmeal and half of a mountain house beef stew that a squirrel was nice enough to share with me.

You might be thinking that this is pretty funny but wait it gets better. On our way out I got to thinking witch pocket did I put my keys in? That's when the panic set in. You see I remembered where I stashed my keys. I put them in that damn gallon bag of snacks for safe keeping. My reason for doing this was so I would not drop them in the sand when unloading my tent and other gear. I now use a caribiner for my keys. (What a jackass.) They were gone.

When we got back to the car (of coarse it wasn't locked I live in Idaho) I tore it a part hoping to find another key. No such luck... I called my mechanic friend back home. He help me trough some back country mechanics. We hot wired the car but the anti-theft system would only let it run for a few seconds or so. The thought of paying a locksmith scared the crap out of me. It was the weekend so having a key sent overnight to the small town of Escalante wasn't gonna work either. Lucky for me we had drove separate. So off to find a new ignition switch. Escalante- nope, Panguich- nope, Beaver- Yes. 8 hours or so round trip to beaver and $350.00 later we headed out to hike Peek a Boo, Spooky, Brimstone. 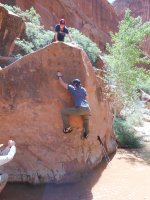 I can't wait to go back. With a spare set of keys of course.
Last edited: Feb 5, 2014
"Do what you can, with what you have, where you are." Theodore Roosevelt

Whenever I have bad things like that happen, I just remind myself of @langutah 's experience at Poison Spring and I realize it could always be worse

Whenever I have bad things like that happen, I just remind myself of @langutah 's experience at Poison Spring and I realize it could always be worse

yup, I think this is worse...
"Do what you can, with what you have, where you are." Theodore Roosevelt 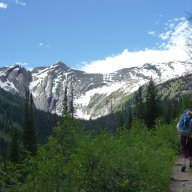 Good story, and reminder on the keys. I like how a lot of packs have the little clip for keys in a pocket now.

I had a ringtail cat in Arizona chew through the string I'd hung my food with and eat most of my food once. I had to do the same thing, go find what he'd left over for me. But fortunately didn't leave my keys with it.

I wonder if my key's are in a hole in the ground or in a nest high up a canyon wall. I was telling this story to my farmer neighbor. He said that he had kinda the same thing happen with some lug nuts. He was was cutting his hay and got a flat tire. Took the tire off and headed to town to get it repaired. When he came back the next morning to get back to it all of his lug nuts were MIA. He thinks that the crows called them off. To funny...
"Do what you can, with what you have, where you are." Theodore Roosevelt
You must log in or register to reply here.
Similar threads