Introducing the Wind Rivers to the next generation, Sept 2016

A much overdue trip report from Sep 9-23, 2016. Thanks again to all who helped make this especially memorable for my nephew! The only disappointment was no golden trout, but honestly there wasn’t enough time to fish the lakes properly.

Our first day was spent gathering supplies in Jackson, a few photos of the Tetons, before leaving for Dubois and a drive to Double Cabin CG. Wiggins Fork valley is spectacular. The river there was very low so I elected not to try fishing. 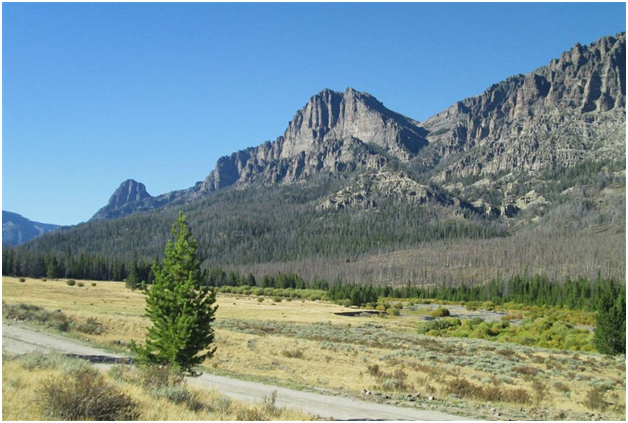 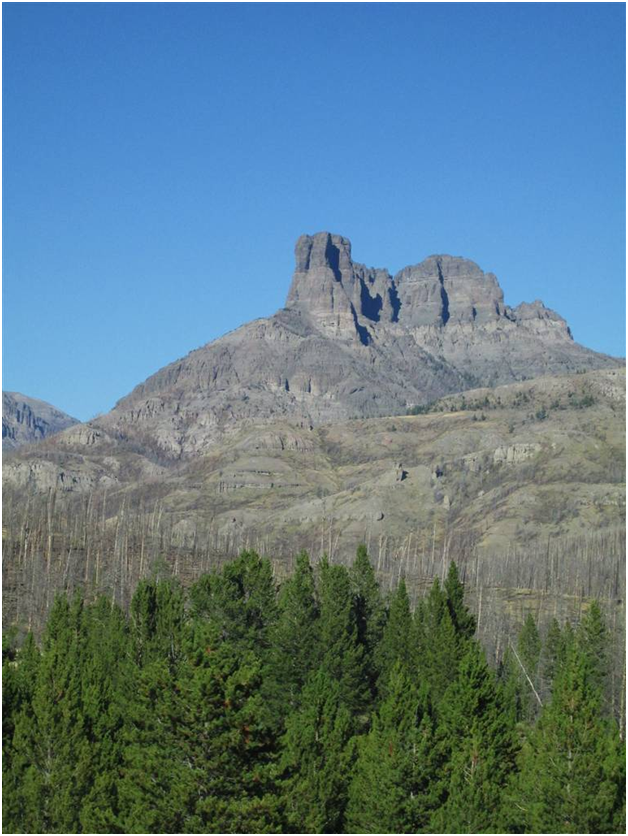 After setting up tents at the Longhorn, we tested our acclimation the next day on the easy 6m hike to Lake Louise. Nearly got blown off the rocks by the wind and returned a little tired so were glad we took it easy. 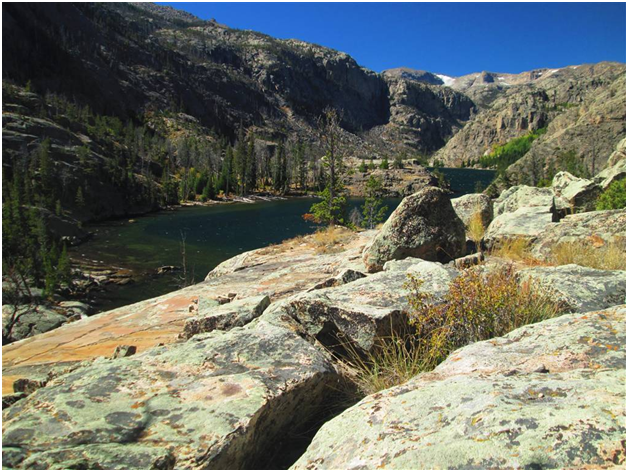 After some brief (and not too productive) fishing on the Wind River that afternoon, we returned to the Longhorn and enjoyed the hospitality of a neighbor’s home/RV-made cake. Much appreciated! 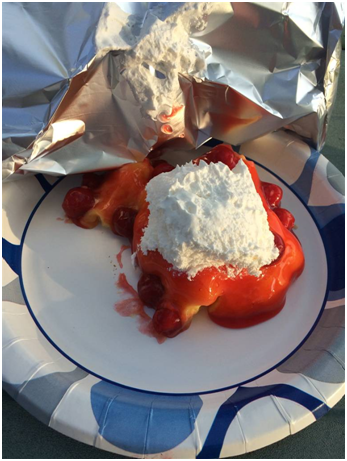 It was a damp and misty drive along Louis L road out of Lander. I thought about the stories of goldens in Thumb and other lakes reached fairly easily from trailheads off that road. But the main purpose of the trip was to introduce my nephew to the core of the Winds so we continued to Pinedale. It was still raining day 3 so we did laundry, visited the Mountain Man museum, and drove to the viewpoints near Elkhart at the end of the day. 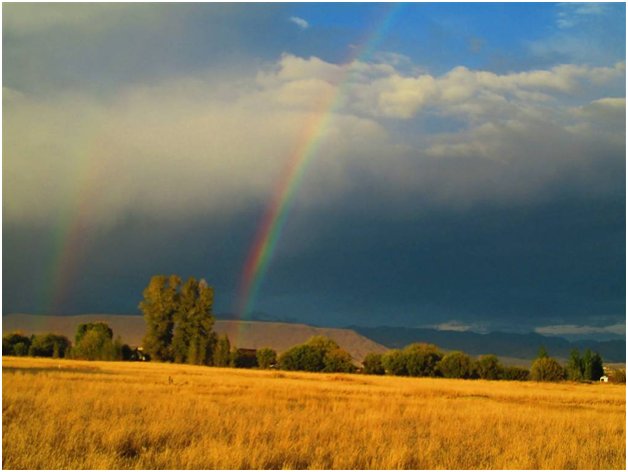 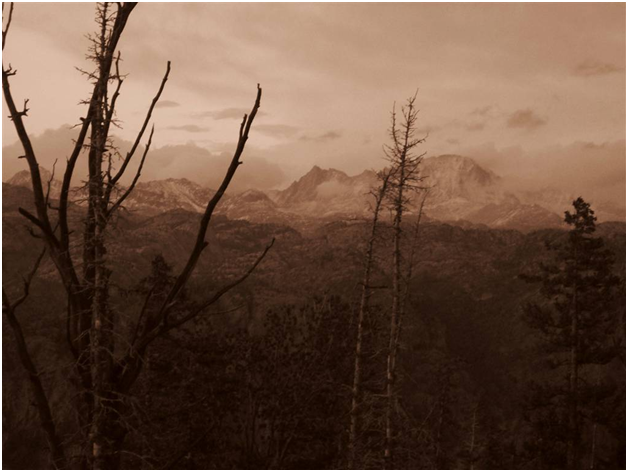 The following day we hiked to the Natural Bridge on Clear Creek. Lingering clouds made for great photos. Once again, I imagined trying to navigate my way through that downfall to reach Clear Lake. We met a few backpackers on their way out, quite miserable after 2 days of cold rain, sleet and snow. We felt acclimated enough to start our main hike the next day. 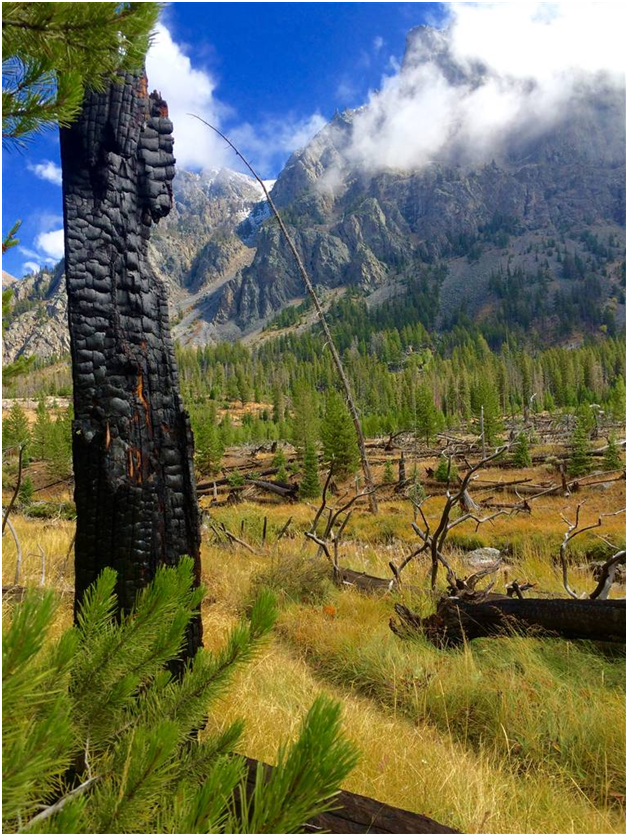 We packed for 4 days and decided to cross the divide above Timico L, getting as close to Flying Monkey as we could. Departing Elkhart Pole Ck TH around 8:30, stopping at Photography Point around 11, we continued to a rock hop of Pole Ck crossing. We made good time (for flatlanders) and set our first camp near Baldy Ck.

I unzipped my tent the following morning to have a good chunk of frost land on my head. Though sheltered, the site was at the base of Mt Baldy and near a lake. Luckily we didn’t have to wait long for the sun to help dry the tents and we broke camp around 9:30. We paused to enjoy the amazing views at the Highline Trail intersection and continued on an easy trek to Timico. 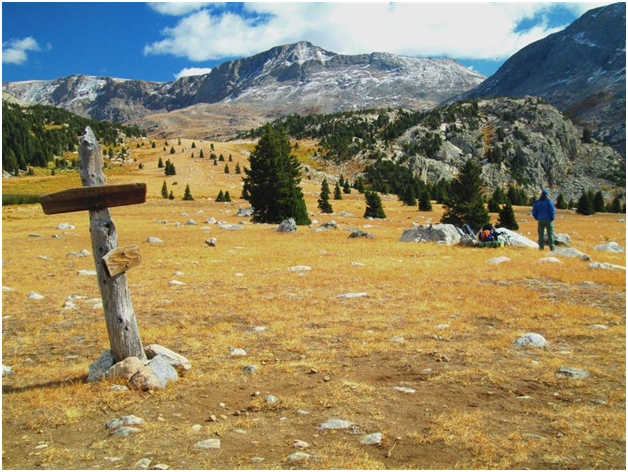 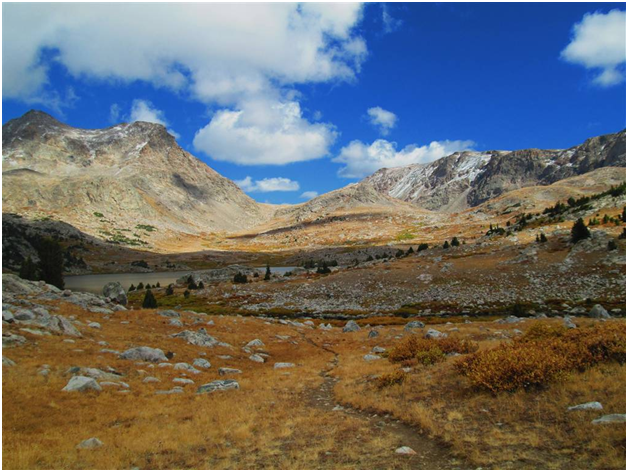 The ascent to Fall Ck Pass then started in earnest. We followed Fall Ck instead of contouring around L10872 which might have been easier.

Views at the pass were well worth the effort, regardless of the direction. Without any visible trail, we kept close to L11125 and L10885 before descending a boulder field near the outlet of L10885. I knew from reports we’d find a path as long as we kept east of the outlet. It finally emerged as the willows gave way to more trees and we were happy to leave the boulders behind. 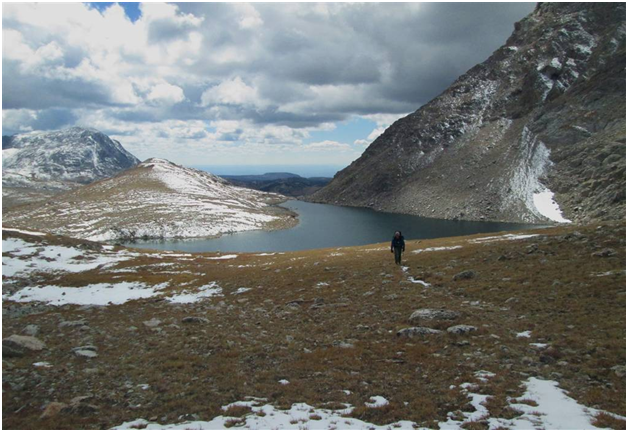 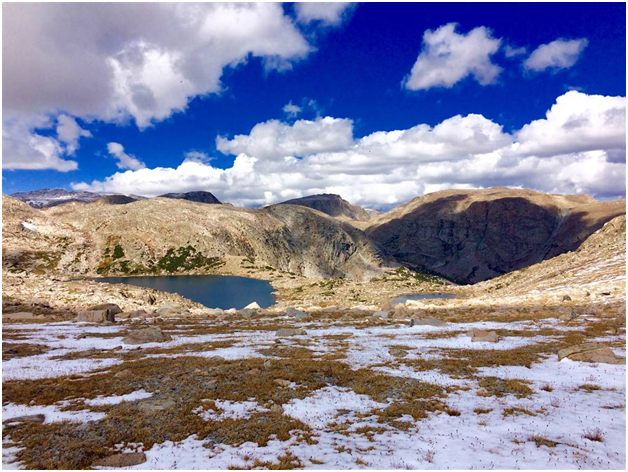 Upper Golden was a short distance further when we hit the Hay Pass Trail and dropped our packs around 3pm. We both knew this was as far as we could go. Camp was in a sheltered spot where we could hear the waterfall from the inlet stream to Upper Golden. By the time we finished camp chores it was too late (and I was too exhausted) to start fishing. We agreed to take a layover day and return the following. My nephew did not want to do the boulder field again, so I’d route us through Hay Pass and the Round Mountain cutoff.

The next day was spectacular. The Golden Lakes valley just has to be experienced (as I know many here have many a time!) We intended on making it out in 1 day, so I wanted to make certain we didn’t waste time searching for the trail. It’s obvious in many places and non-existent in many others. We placed several small cairns for guidance around the lakes and found the path leading out towards Hay Pass. 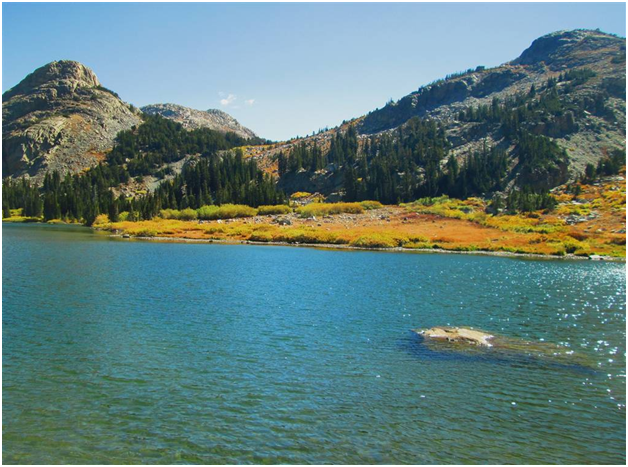 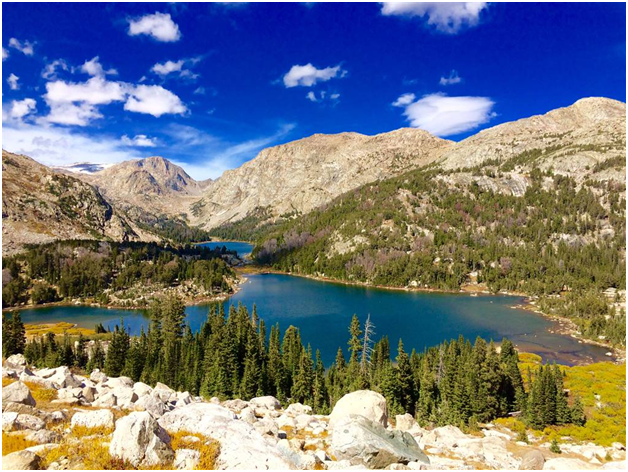 With that done, I spent the rest of the day fishing. All that way and no luck! I searched the water with a gold/red-dotted Jake’s Money Clip to no avail. The connecting streams for inlets and outlets were nearly dry. Most of the time was spent casting off nearby points, varying depths and retrieves. Maybe evening would have been better. Oh well… can’t beat the scenery or experience.

We woke the next day to a dark sky and increasing wind. Packing up early we began the trek back. Scouting the route the day before worked out great. As we neared Dennis L the wind was (literally) knocking us over. The trail disappeared more than a few times. At one point I checked the route by map and compass sheltered by some krumholtz. Had to pull the pack off, including the bear spray on the hip belt. It’s still there. Didn’t realize it until much later. Busy fighting sleet and wind, we were relieved to see Dennis L to the west. With only one can of spray between us, I asked my nephew to not get too far ahead. You just never know. 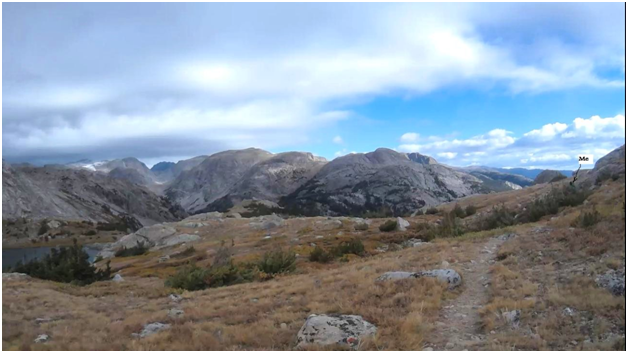 After the pass, the trail is obvious (for a while). Then it disappeared mostly, but the terrain was easy enough that we made good time. We did pause to scout for the cutoff over Round Mountain before committing to an ascent through the forest. Eventually the trail appeared. As we were nearing tree-line we heard several sharp cracks (like rock-on-rock). Obviously it was something big. It was coming from the trees nearest my nephew. I told him to come towards me, get away from the trees and get the spray ready. Maybe an elk warning us. Maybe even just bighorns head butting. Never did see what it was. Found what’s might be a wolf print up there as well. Looked too big for a coyote. 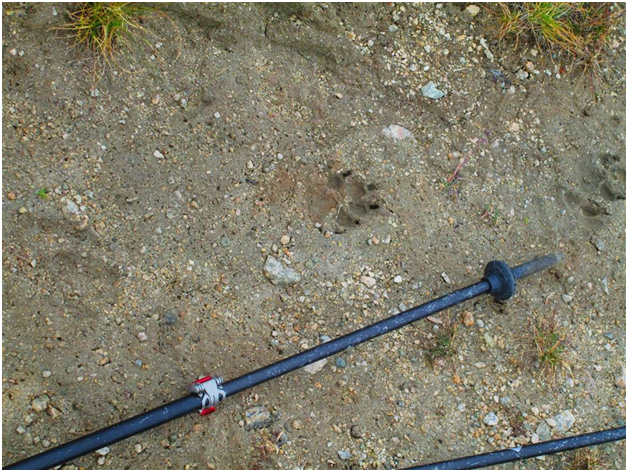 The sleet and rain eventually let up, but clouds remained. So it was just a matter of retracing our path from Timico after that, moving as fast as we could, not stopping for anything other than water and snacks. We came across a few hikers at the lower Pole Creek crossing. We had not seen another hiker since Photography Point 3 days earlier.

By the time we passed Miller’s Park the sun was going down and we were committed to getting back to the car. Near the end, with darkness now upon us, we had to duck under a fallen tree. The knees creaked and maybe more. Over 20 miles in 1 day. The motivation for a hot meal, shower and a beer (not necessarily in that order) drove us on.

After a recuperation day, we did an overnight at Dad’s Lake. That was the only place I had a hit and missed setting the hook. The water just exploded with fish after sunset. But we were busy talking to a hunter that came into camp. Had a great conversation and learned he knew our cousins in Kansas. What are the chances of that? Discussed a variety of things before darkness and cold ended it. I felt better as he said I was pretty much wasting my time fishing for goldens anywhere at that time of year. One of best suggestions were the burgers at the café in Boulder. We followed his advice and even went back the next day for the pulled pork. Just amazingly good food and a great way to end the trip. Thanks!! 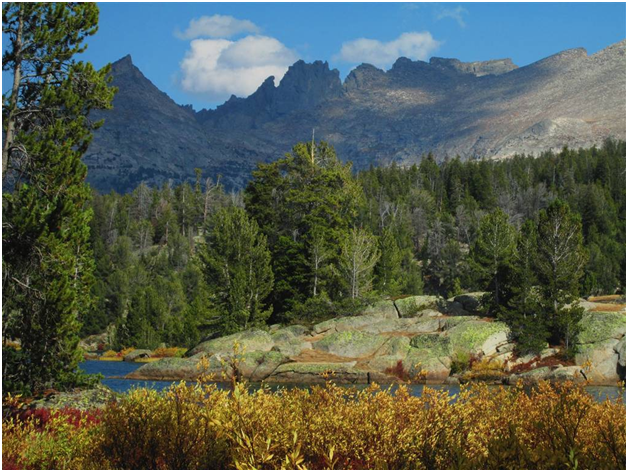 Now if I can just find some different great scenery and a golden trout for this year’s September adventure! Yep, I’m still going to keep trying and I will make Flying Monkey someday! My nephew hopes to return, job allowing. The tradition has been passed along. Thanks to all who helped make it happen. I’ll probably need your help again shortly in the trip-planning forum.
Last edited: Jun 15, 2017

Many of your images seem to be pointing to a folder on your local computer. The ones you uploaded to BCP are showing up fine though.
IG: @backcountrypost

Thanks. First trip post so expected some issues. The img icons may be left from a cut and paste from ms/word, which is how I composed it, complete with pics. That didn't show pics, so had to research how-to. Found upload and used original file to find, upload, and insert uploaded pics in correct place. I'll see if I can delete leftover pointers. 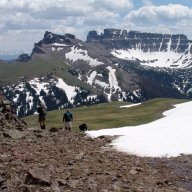 I used to lead Horse Packtrips out of Double Cabin as a young man, reason why it was my handle at original backpacker site. LOVE IT and glad you got there. From there you can backpack to one of the best petrified forests you'll ever find and a few awesome lakes. Sadly the ATV crowd has found it, but they can't go up Wiggins or Frontier Creek into the Washakie.

Outstanding report, many thanks for sharing. Believe it or not I know a lake in the Absaroka with Goldens that will blow your mind. 13 mile hike to camp then a fairly easy dayhike up top for the Goldens. No sharing bearspry up there, everyone takes at least one can. There's no clue there but happy to share in message.

Thanks again for a great vicarious thrill.
You must log in or register to reply here.
Similar threads