In Search of Snow in the Eastern Sierra

Seeing how winter was going to end early (not sure it ever really started..), my friend and I decided to look for snow before it all melted. Seeing how Yosemite was looking dry and having gone to SEKI in the past week, we planned to check out the Eastern Sierra. With the NOAA data showing areas around Big Pine(10673ft) having over 14 inches of snow, we opted to head that way

Not knowing entirely what the conditions would be like, we packed everything our 0F bags, crampons, snowshoes, etc and left for Lone Pine in the wee hours of the morning.

Since I'm not really a camera person, my friend took all these photos!
I've never been fond of the Los Angeles -> Eastern Sierra route but the sunrise was nice that morning 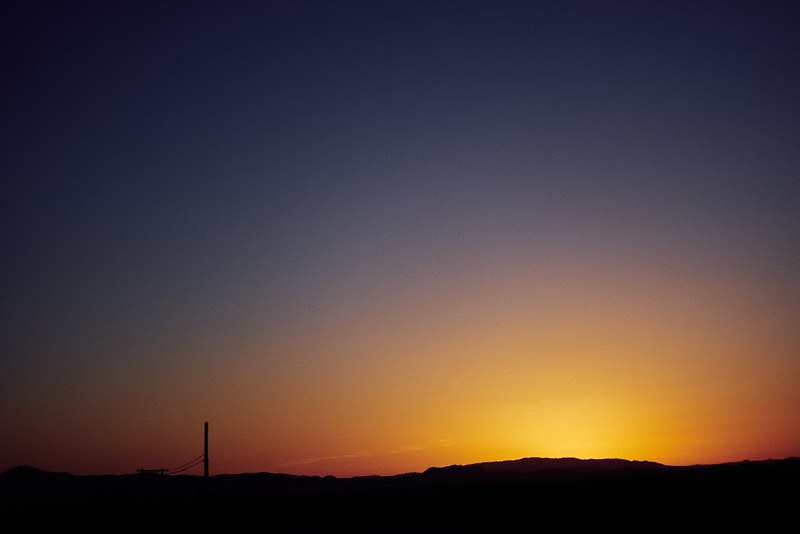 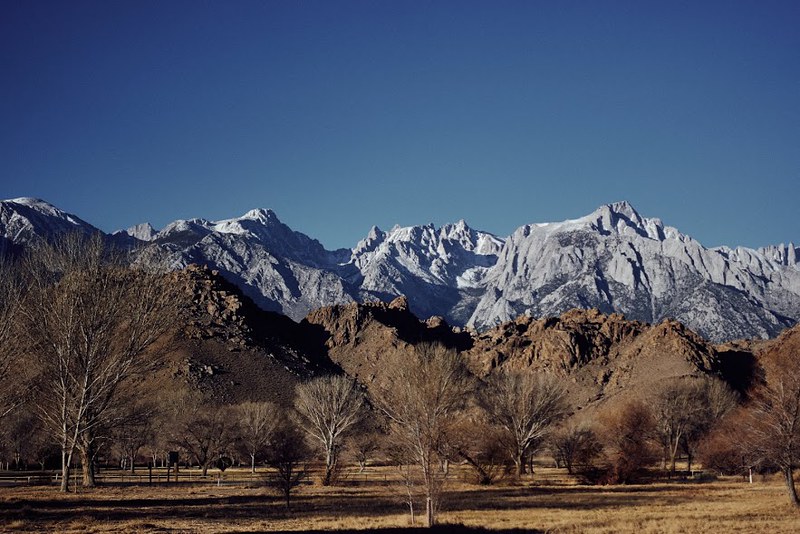 After about 2 hours, we arrived at the Mt Whitney visitor center to pick up our permits. For these trips, we usually use my suv, but with such a mild winter we decided to take my friend's prius. First time driving one of these things for a long drive...I must say it was really really nice to get an average of 51mpg! I can only dream of a 4wd version one day.... 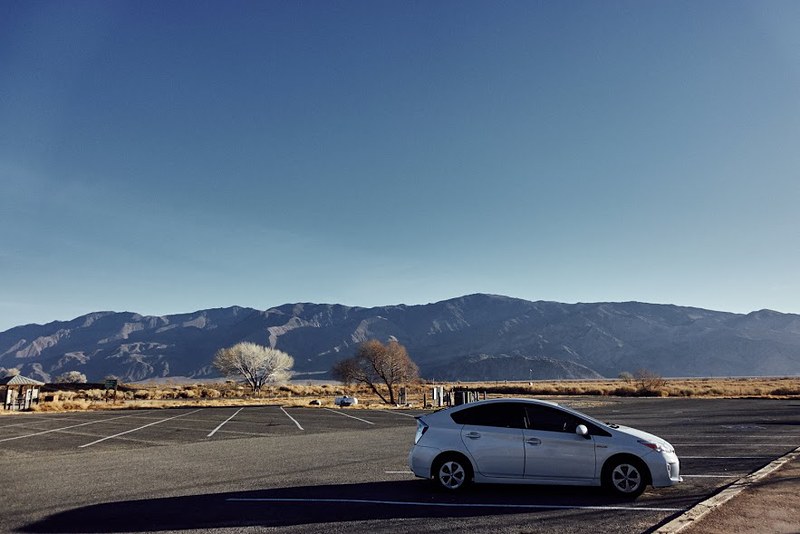 After getting our permit and having a nice chat with the rangers, we departed for the trailhead. Seeing how little snow there was on the mountains on the way in, our hopes of finding a reasonable amount of snow began to fade. Spent most of the drive trying to determine whether we should bring the snowshoes or not...
Some snow on the way in on Glacier Lodge Road 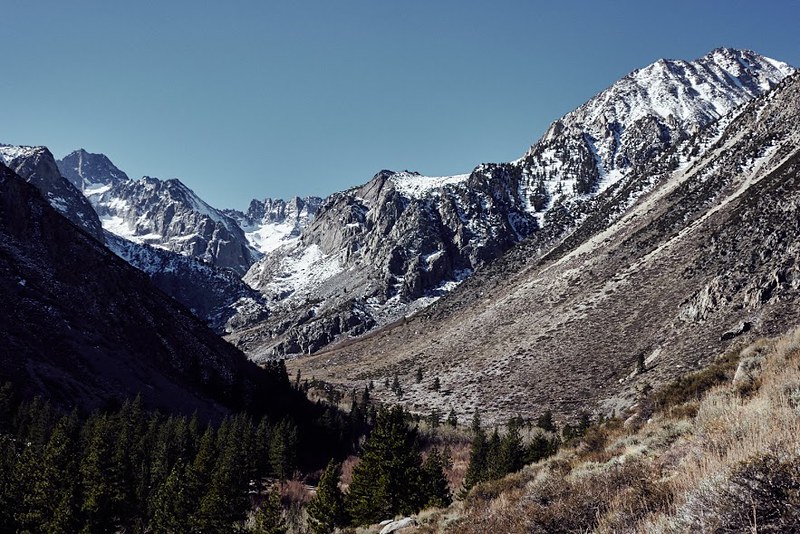 In the end, we opted to bring the snowshoes...just as a precaution since our destination was at 10,200ft elevation. Though it seemed like a good idea, the first 3 miles of the trail with a 40ish lb pack made us seriously question our rational... But hey, at least we didn't bring our crampons, ice axes, and helmets! 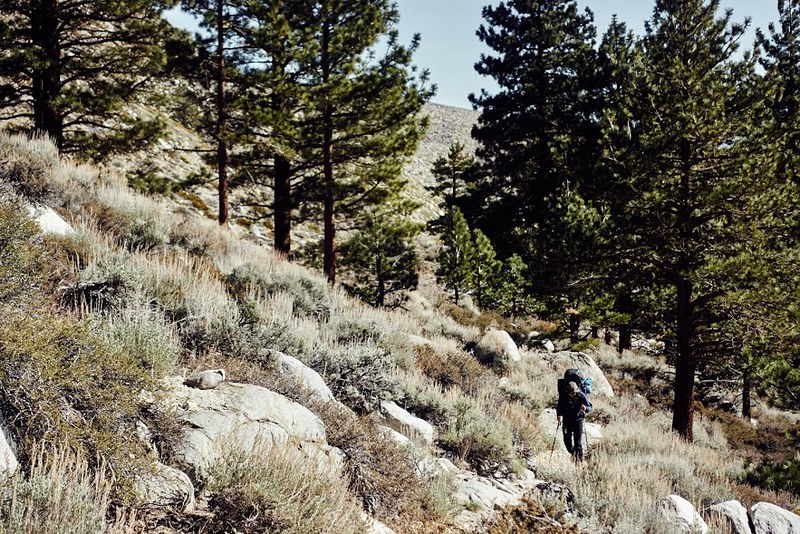 "nope. there's is no snow...but there's the car! Maybe we could run down and drop off the snowshoes?" Sadly, we just kept going up :whiteflag: 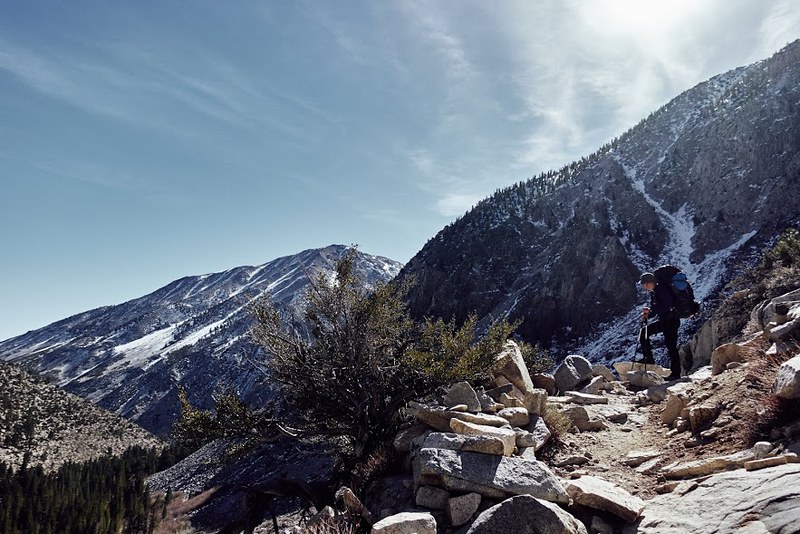 We eventually did run into some snow at around 9200 feet. The trail eventually became pretty icy due to all the sun this area has been receiving. Removing the microspikes from the pack was nice but...the weight of the snowshoes were still there though... 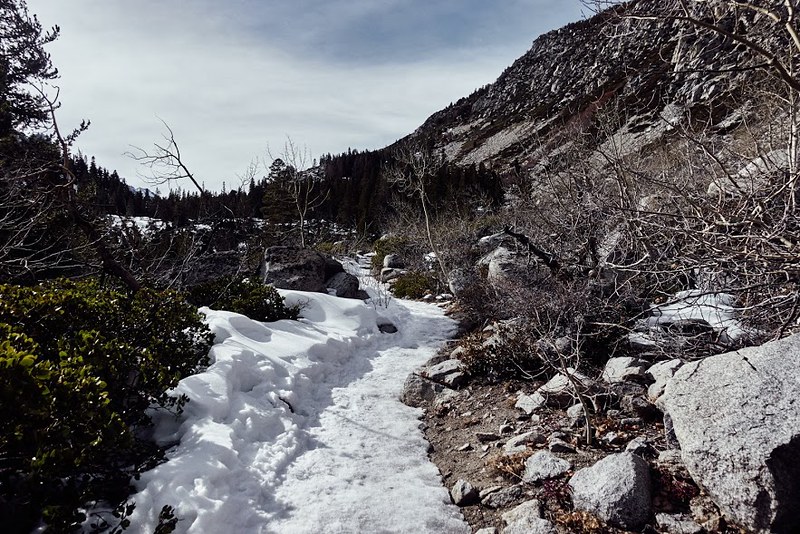 The trail itself wasn't steep but it sure kept going up and up for about 2900feet. Took us about five and half hours to make it to make it to the snow-covered lakes. They are whole lot nicer when they aren't snow covered but Temple Crag was stunning! 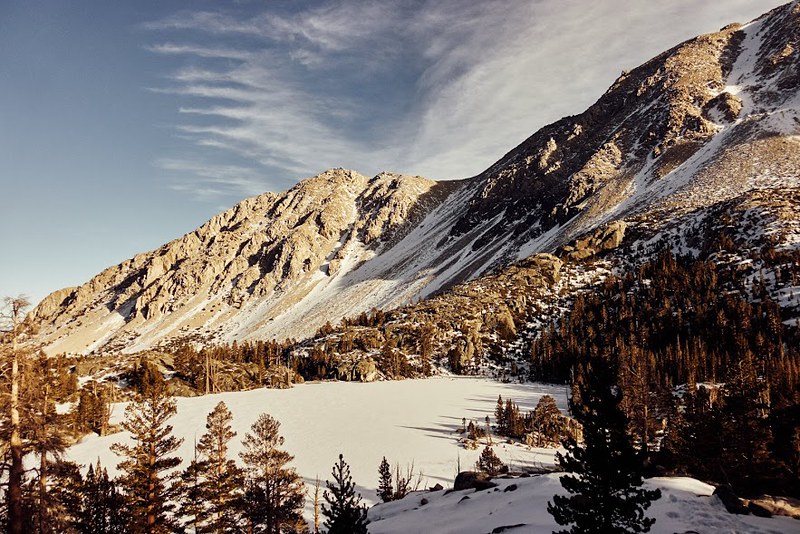 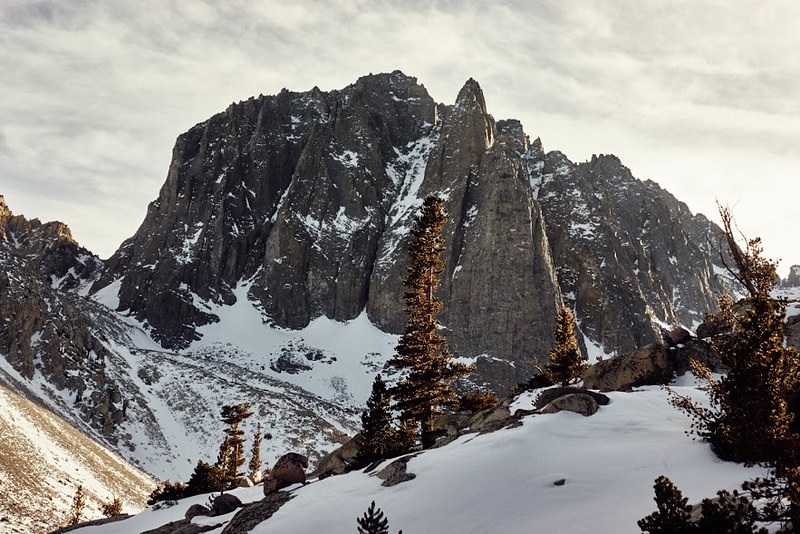 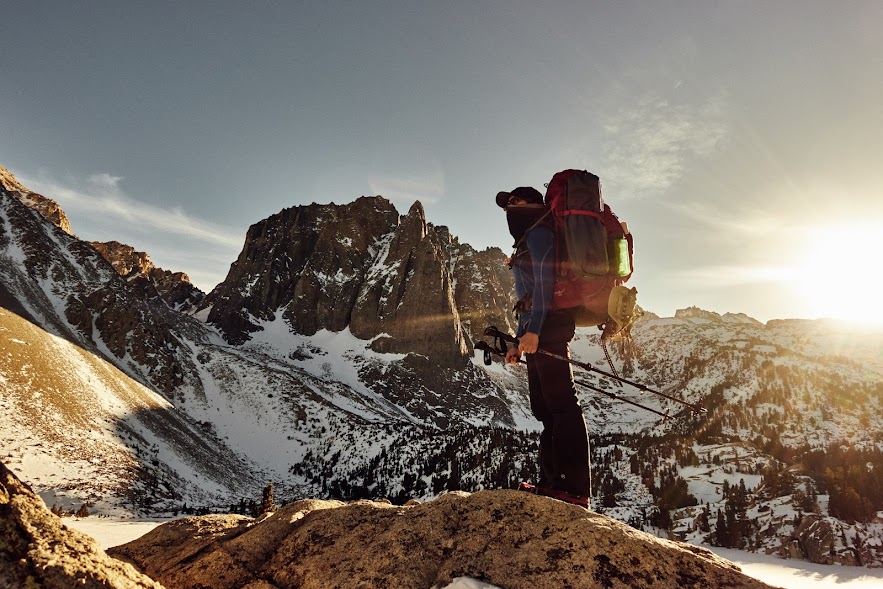 After a short walk around second lake, we found a nice camp site, albeit rather rocky and windy though. However, the sunset made up for it! 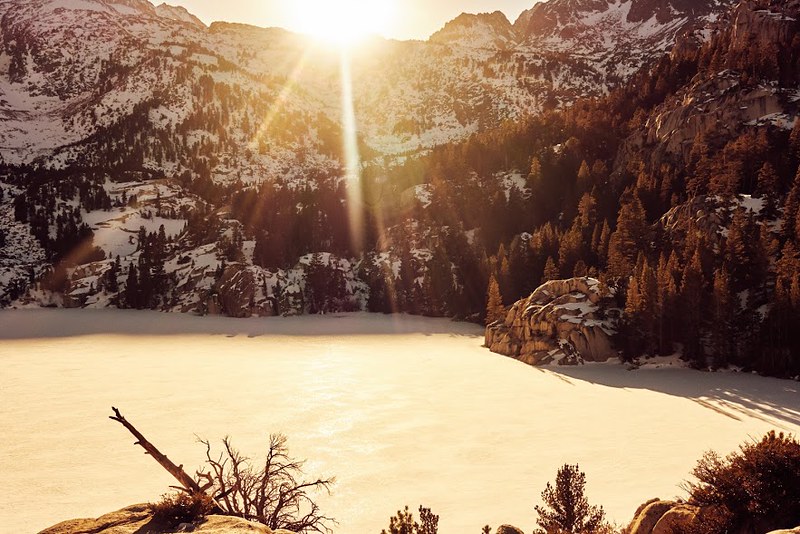 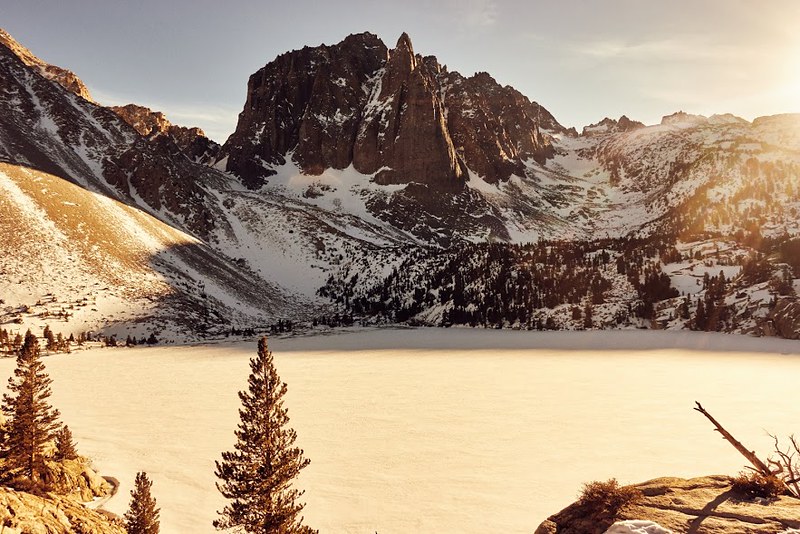 As the sun set, the winds began to pick up. The NWS forecast was calling for 11-15mph winds but in reality, it was around 20mph consistent with 30-35mph gusts based on my anemometer. It was NOT fun setting up the tent but thankfully there were a bunch of rocks around! The snowshoes finally became useful here as anchors for the guy lines! I knew there was a reason we'd need em! 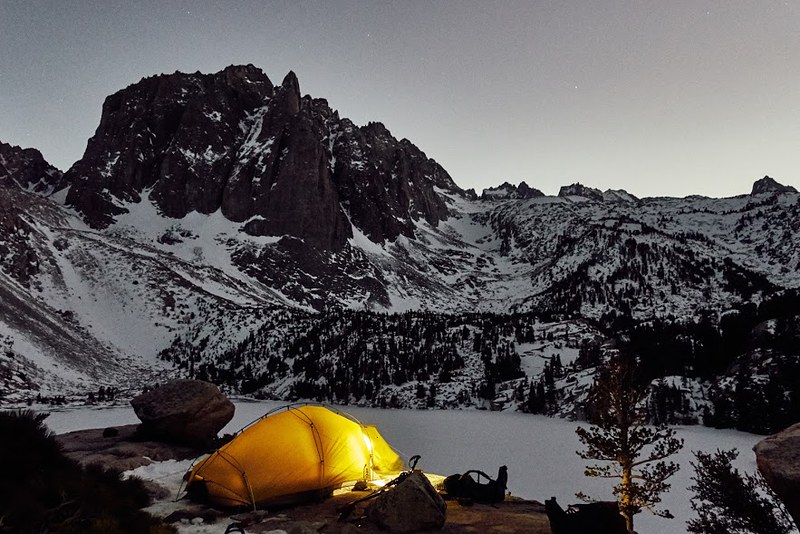 With the increasing winds, we opted to cook/melt snow inside the tent vestibule. It was sort of cramped...but it worked. It was entertaining to watch the steam go up 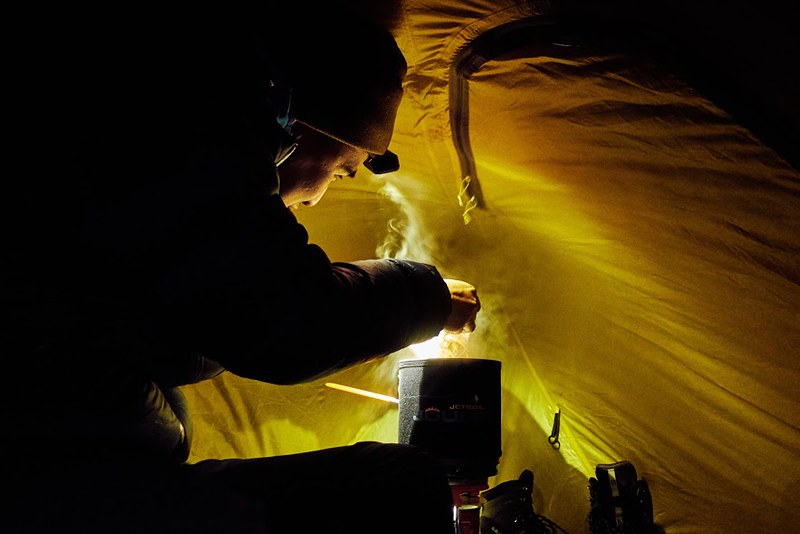 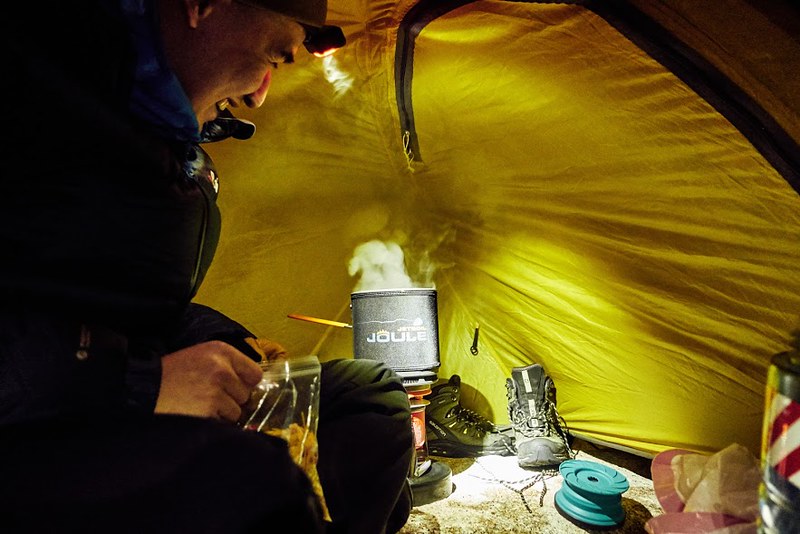 By the time we finished with all the melting and cooking, it was dark enough for the stars! 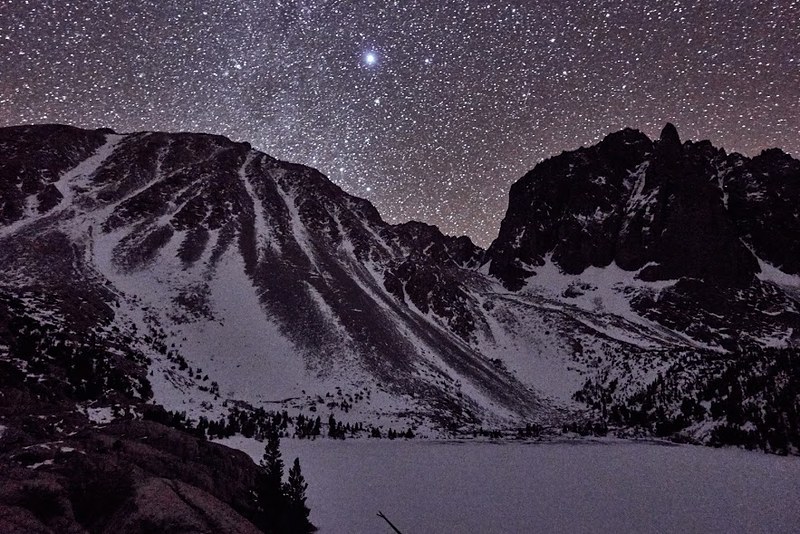 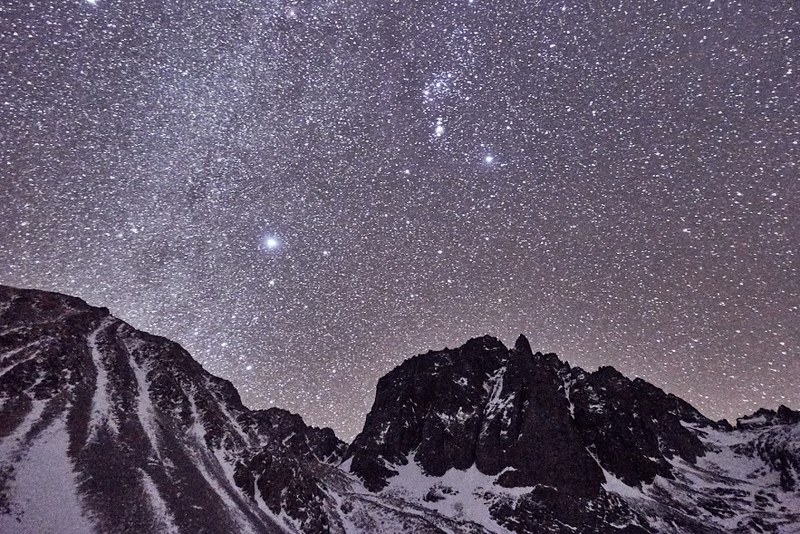 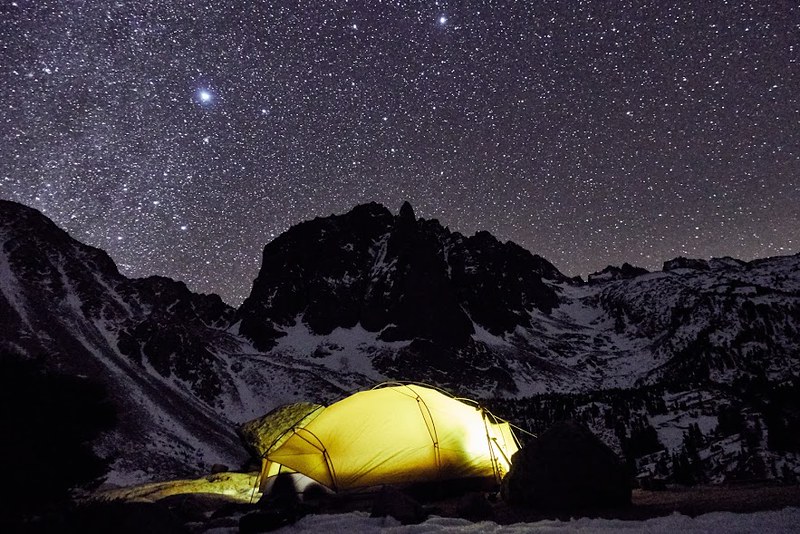 By the time we called it a night, the gusts started peaking at 40mph. The gusts made it feel like we were experiencing an earthquake inside the tent. Not easy to sleep in. Though we had packed quite a bit of things, I regrettably forgot the one thing that could make a windy night bearable: Ear plugs!
Sadly, the wind would keep blowing all the way till 9am the next morning. Not wanting to go outside till it was absolutely necessary, we cooked breakfast in the tent. 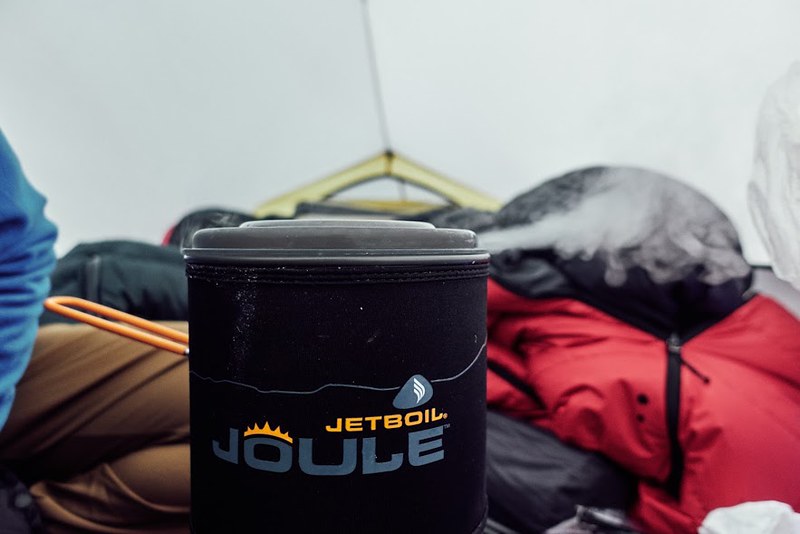 As I had only brought one stove (jetboil) which couldn't use a frying pan, we had simple non-bacon breakfast burritos. Now I usually like to warm up the tortillas on a frying pan but the alternative worked out nicely! 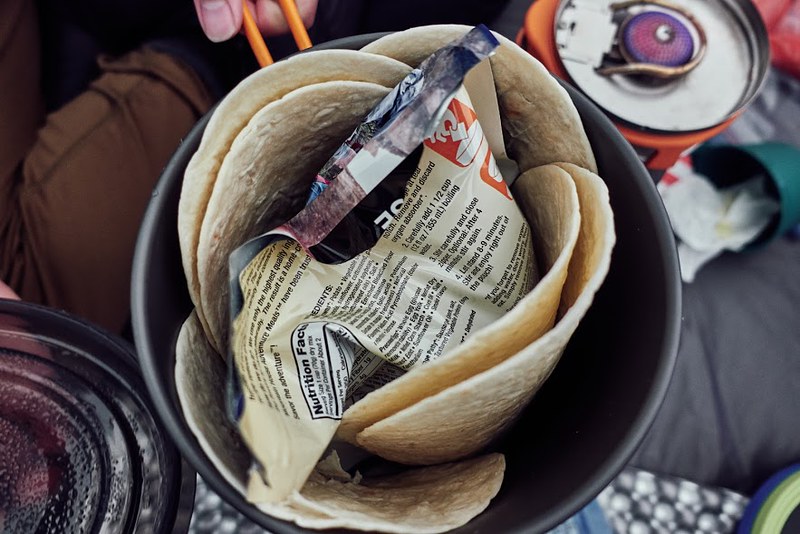 With the winds still blowing at around 15-20mph, it was quite challenging to take the tent down. Before leaving, we explored the area a little more and was sadden to find quite a bit of trash and evidence of illegal fires. 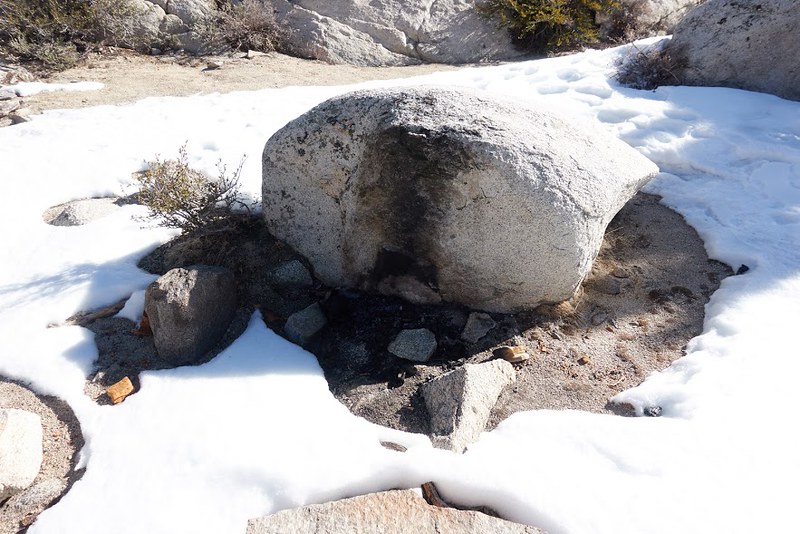 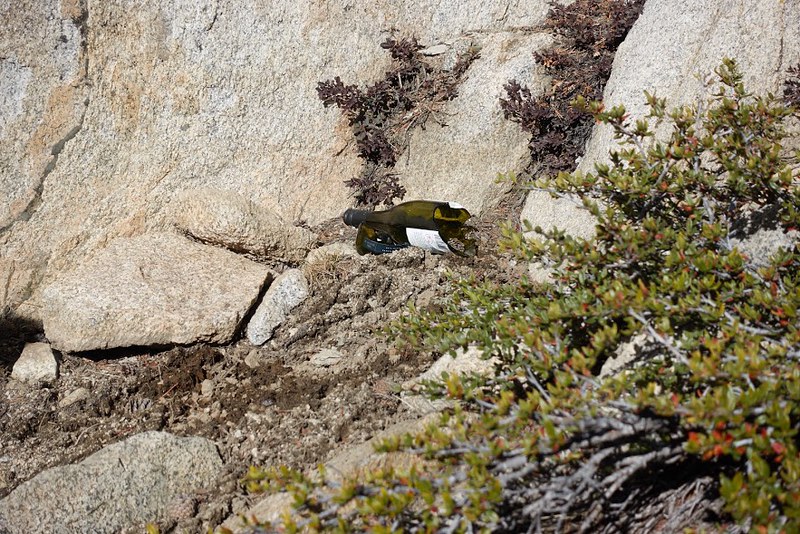 We packed out as much of the trash as we could but had to leave some behind as there wasn't really any safe way to bring back some of it. Disappointing really.

Going pack to the trailhead was a little rough as all the sun from the previous day made the first third of the trail pretty icy. Had a few iffy moments but we made it back to the car in one piece. Thankfully LA traffic wasn't too bad and we made it home just in time for a pizza dinner!

In the end, we didn't get the snow that we wanted but it was still fun. We still have hopes for what forecasters are calling "Miracle March" but till then, I think we'll postpone our upcoming Cloud's Rest trip.

Even if you did not need snowshoes, it still looks like a good trip. Thanks for carrying out others people's crap, I'm glad I'm not the only one
My trip reports: backpackandbeer.blogspot.com

That sounds like a wonderful trip! Glad you were able to use your snowshoes for something.
I like the alternative to heating the tortillas, hah, I would have given up and just eaten them cold.
Your friend took some gorgeous photos!

I hiked Whitney in 2008 with my Dad, and it was a very memorable trip. I'd really love to see more of the Range of Light, but the long drive eats up too much precious time. Some day.
You must log in or register to reply here.
Similar threads