A week after taking out Ellory and Willow respectively, it was on to round #3 with Raylee. Again, due to snow melt along easier trails in the Uintas, we stayed closer to home where I decided to introduce Raylee to Horsetail Falls.

When we arrived at the trailhead, it was a good thing that it was once again early in the evening. The trailhead had clearly overflowed with vehicles that day with many parked along the road well before the actual trailhead lot. Fortunately, we arrived as someone had pulled out and got a lone space in the lot itself. It seems almost every year, local trailheads become more and more popular and harder and harder to come by parking spaces. Population growth combined with so much social media happening will do that.

With packs on, we got off on and on our way. 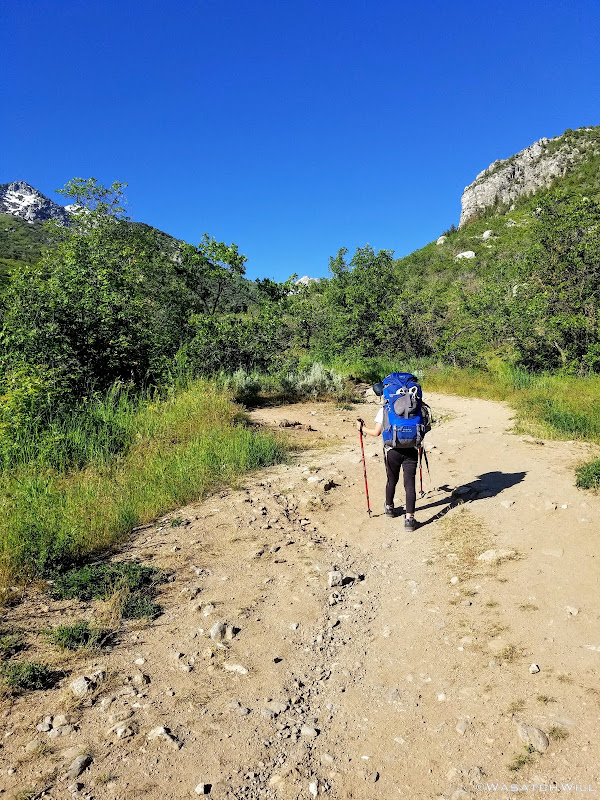 Only about a quarter mile up and Raylee was very much struggling with the gain the trail was making. She wasn't certain she could make it. I took pity on her and took her pack for her, front-packing it up until we reached a meadow about a mile up the trail.

I had anticipated going another mile and half or so, above and beyond the falls to stay at one of a few sites up there. Due to our late start and the struggle Raylee had had with the steeper trail ascent and her pack, I reasoned it'd be best to just call it good there and camp along the edge of the meadow, so, that we did. Little did I know just how good of a decision that was to be with what was to come the following morning. 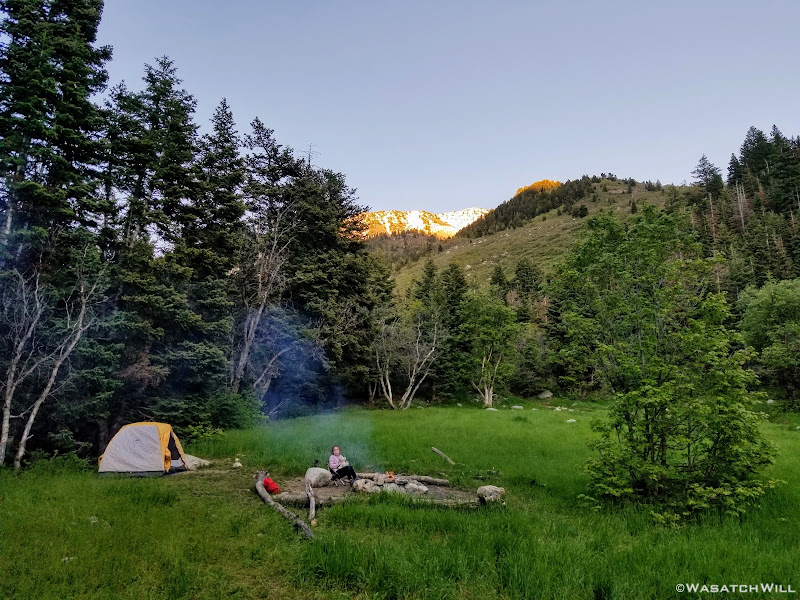 Camp at the edge of a meadow 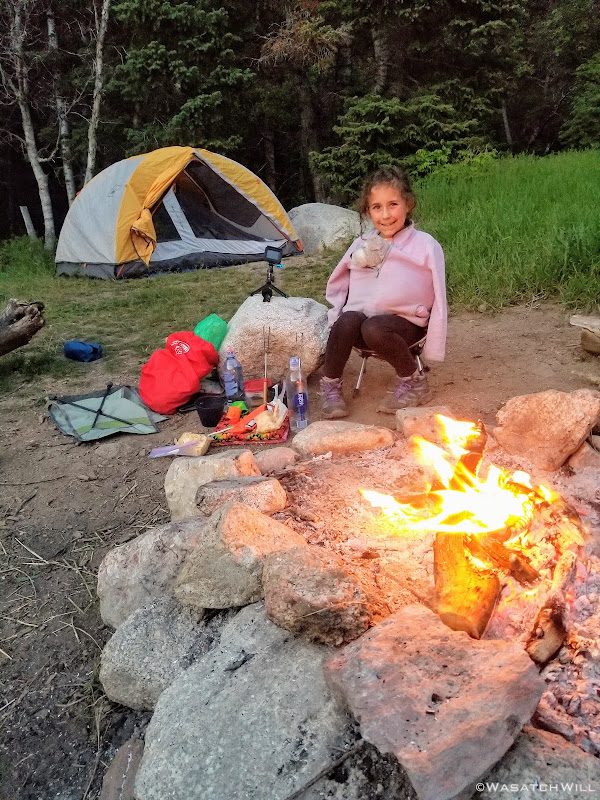 Snug and warm by the fire

After a fireside dinner and some s'mores, we retired for the night.

The next morning we had a quick breakfast and got on our way up the trail to go see the waterfall. The trail only got more strenuous and steep at times. It's amazing how easy it is for me to forget details like that from previous hikes up the same trail or not notice at all, only to realize just how strenuous a trail can be with a young child.

For one stretch of the trail, a creek that crossed over it was overflowing with run-off had flooded out over the trail making it a fun game of hopscotch with rocks to keep from getting our feet cold and wet. We both managed well. 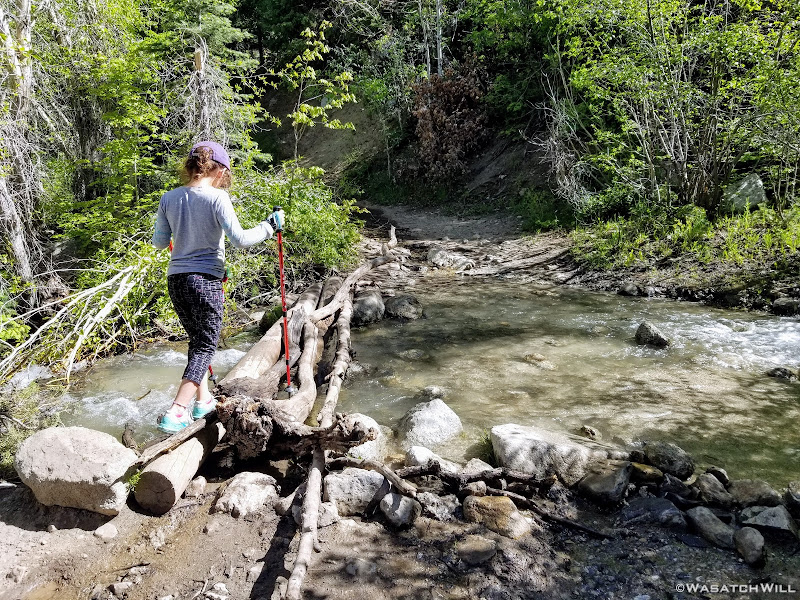 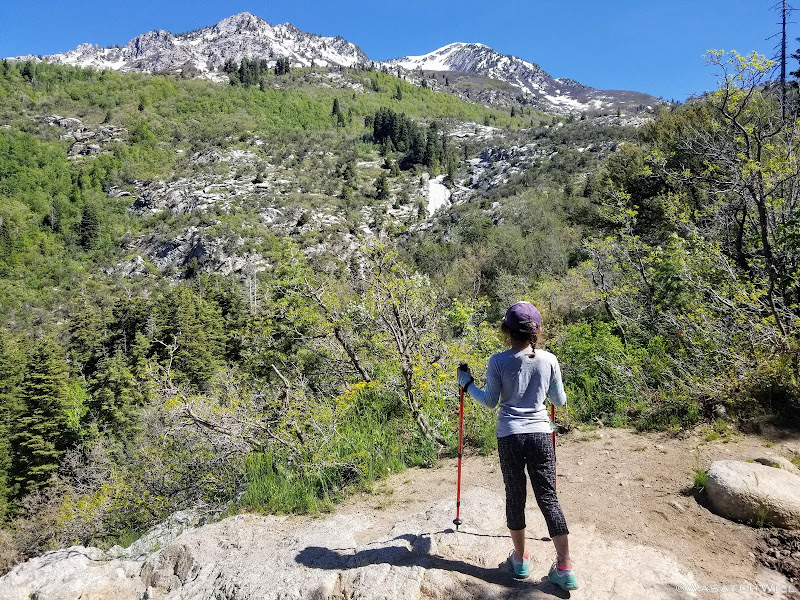 First view of Horsetail Falls along a short detour route

Soon we were at the base of the falls, enjoying it all to ourselves before the wave of that day's day hiker crowd began to arrive. 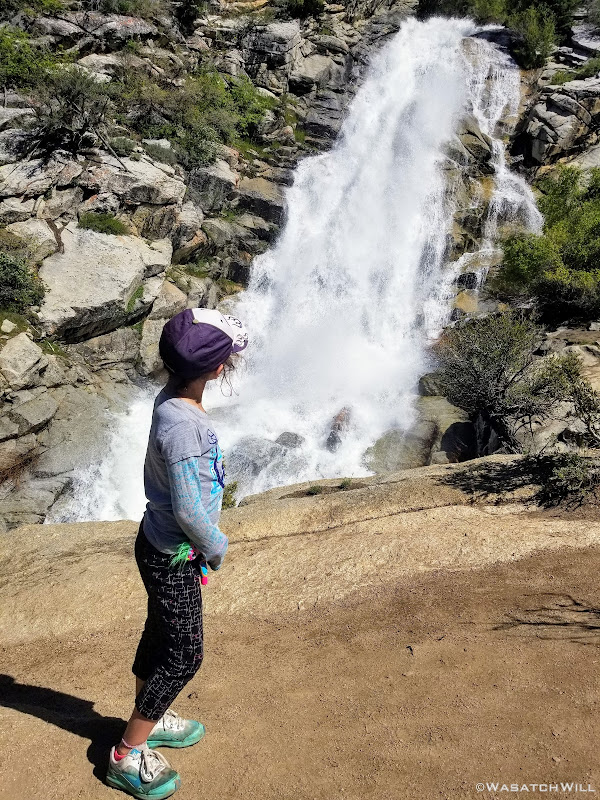 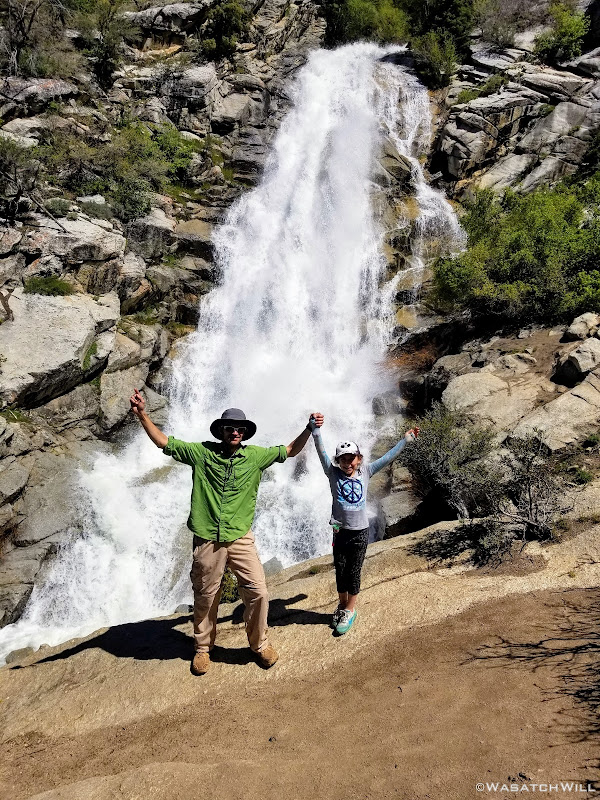 From there, we pushed on up above the falls to scout out the intended site I thought we might be able to make it to the previous evening, stopping for some view and to play a bit more among the rocks along the way. 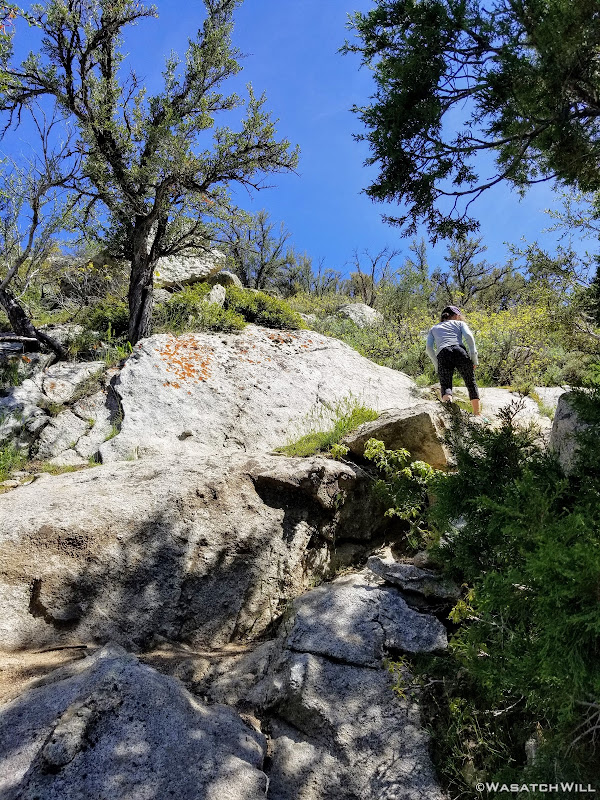 Forging ahead up above the falls 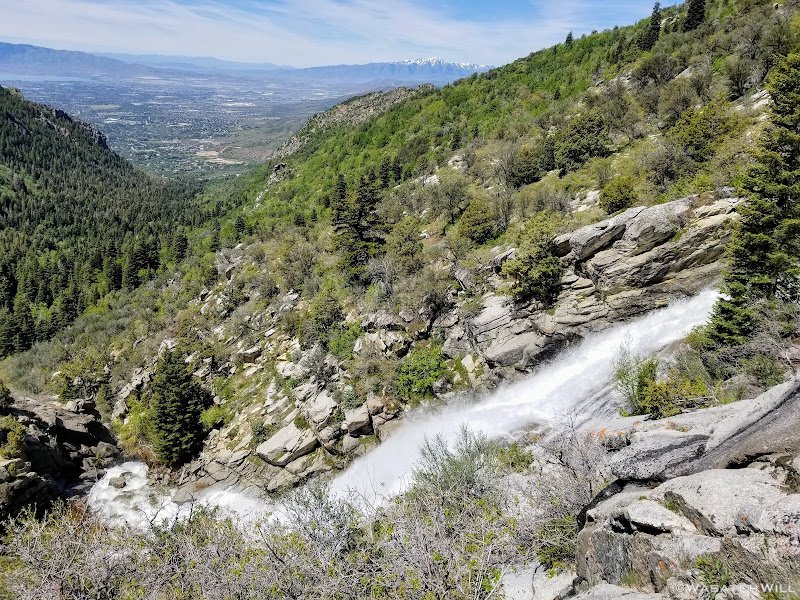 Looking across the top of the falls 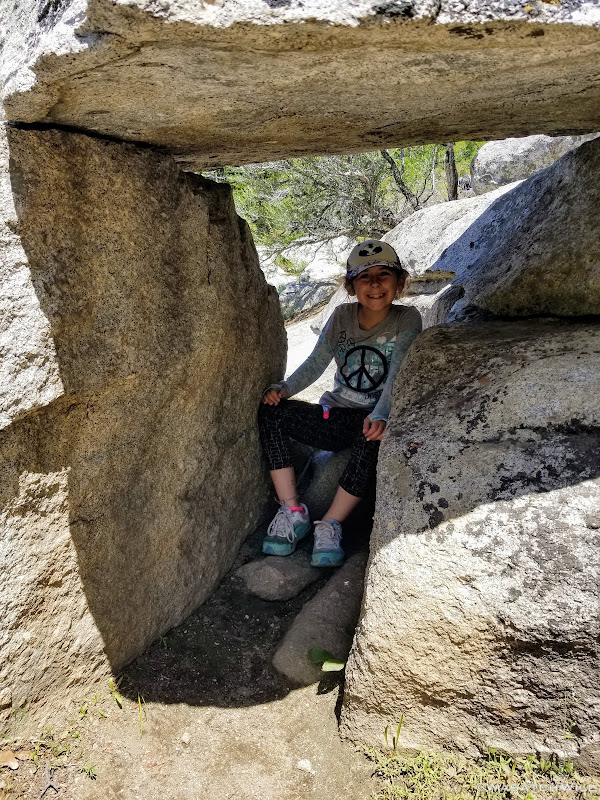 Some playtime among the rocks

It required a pretty grueling effort to make it up to the site I had in mind, and it was still quite marshy and muddy all around it from snowmelt, that the mosquitos were horrendous. Given how much more strenuous the trail was to reach that point, the bugs there, and the tricky creek crossings and flooded trail further down below, I no doubt would have regretted pushing Raylee up to the site the night before. We most certainly would have been setting up well into the dark of night and she would not have had a good memory of the trip.

Whew!!! Crisis averted. With the revelation of how much smarter it was to camp where we did the previous night, we stormed down the trail back to our camp to grab our gear and finish on out. 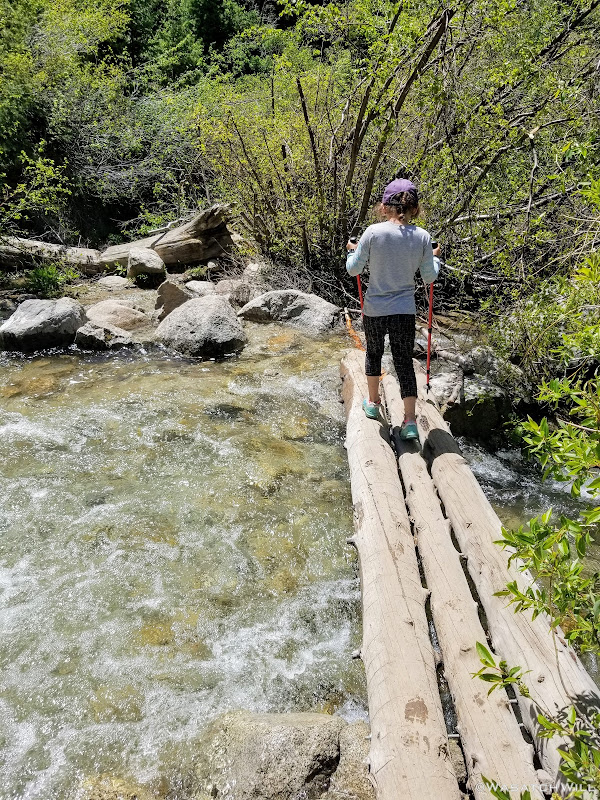 Crossing back over another creek 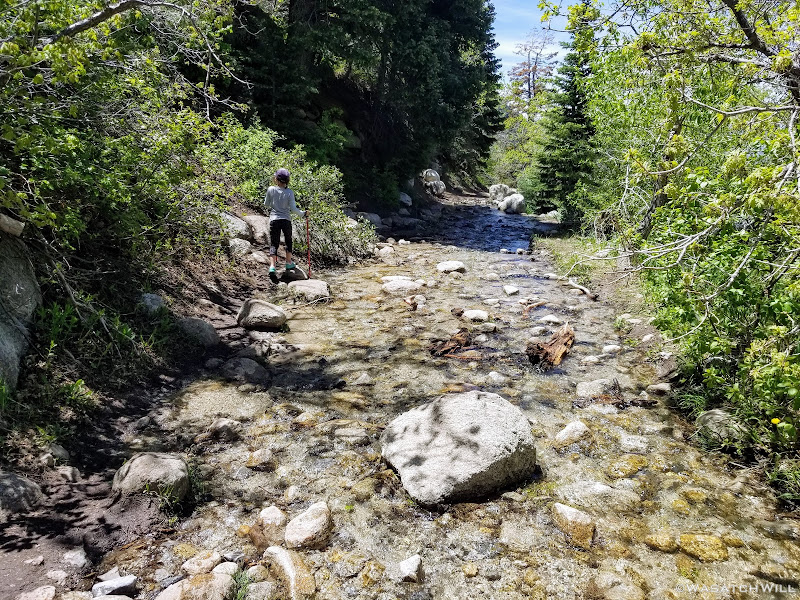 The flooded section of trail 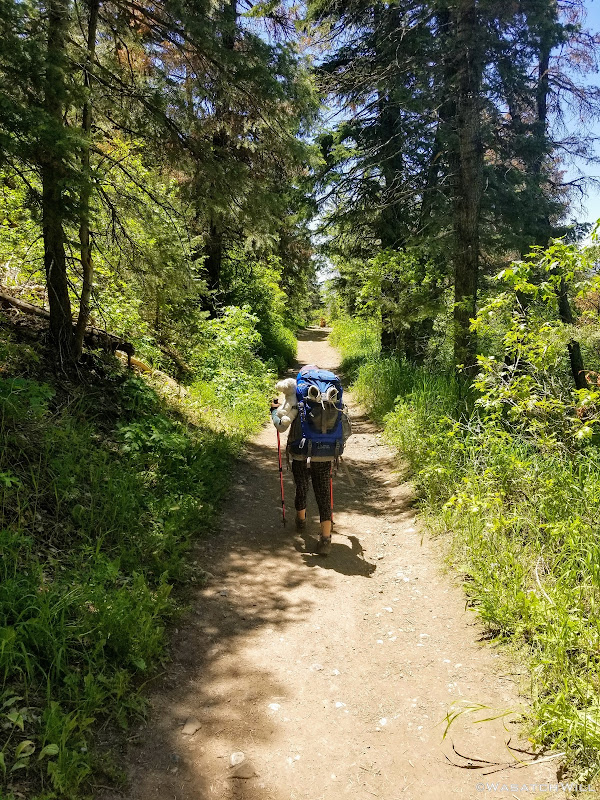 Raylee reunited with her pack along the final mile

Raylee was committed to carrying her pack the whole way out from camp, feeling bad about not doing it all the night before. She had no issues whatsoever with it downhill and she was proud of herself, as was I.

Another wonderful time in the woods with one of my kids would not be complete without indulging in a nice post-hike meal afterwards. Her pick, after we discovered that JCW's in American Fork had been temporarily shut down for reconstruction, was BYU's creamery and grill back in our neighborhood where we enjoyed some burgers and ice cream. 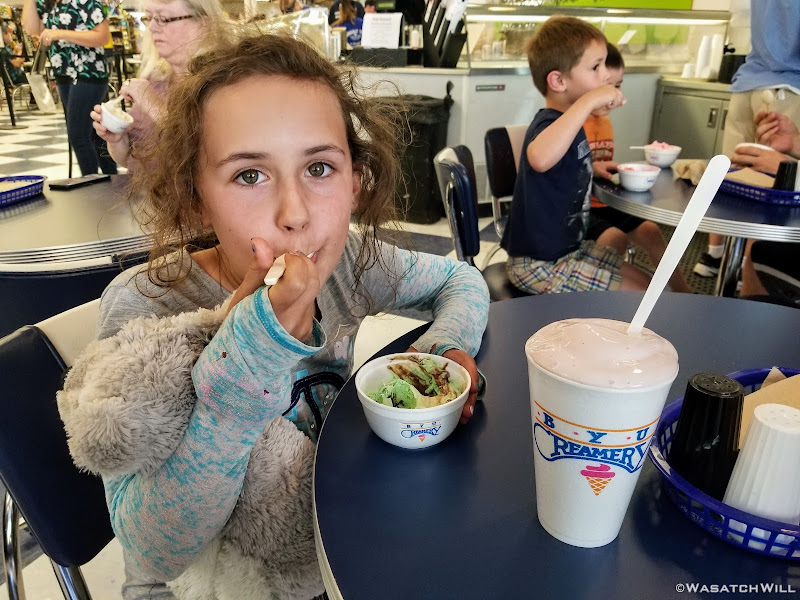 Love this. Raylee is adorable, too! How lucky your kids are to learn about and enjoy backcountry camping at such a young age. I missed a TR about your father-daughter trip with Willow and will look for that now.

What a trooper!
Glad you guys avoided a bad experience, sometimes things just work out for the best.
F

So cool getting out with your children, looks like your daughter was enjoying the trip!

It can be a challenge getting the pack weight right with younger children.

Going to check out your other trips too, Thanks for posting!
You must log in or register to reply here.
Similar threads