Hiking the Idaho Centennial Trail in the Great Burn 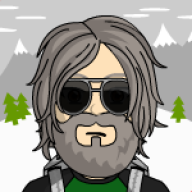 This route is one that I've had on my list for about a year now ever since I saw another video from the same area.

We got to the trailhead late in the day and the smoke in the air made it seem later than it was. The main goal was to get into Trio Lakes. There was no trail on my map into the lakes (though I know of a trail from the bottom). This would be a ridge walk along the State Line trail (Idaho Centennial Trail) all of the way to the lakes.

The views were so great and the smoky light made it so we were not making very good time. Even though we don't want the smoke, it made the light kind of magical. We came to the junction with the trail down in to Heart Lake and decided to drop down to the lake for the night. It was getting dark as we started our decent. It's a really long ways down into the lake, but the views are incredible! We got the lake and took the first campsite we came across. It wasn't great for hammocking, but we would take what we could get. The local mountain goats came out to greet us and even though we had Timber with us, they were very bold. There were no conflicts though. With no fires, it was an early night.

We were up early the next morning. We knew today was going to be a challenge. We continued around Heart Lake and made it to a campsite that we camped in a few years ago. We continued to follow the trail up to Pearl Lake. I've done this small section before last time I camped here and it is really beautiful. The wildflowers were in full bloom! We stopped and took a little break at Pearl and then prepared for the next push back up to the State Line trail.

I was not ready for how beautiful Dalton Lake is from the saddle above Pearl. We had to take another break here just so we could stare at the lake and the amazing cliffs that tower above the lake. From there it was more climbing to get up the trail. That section was really steep. We took our time and finally made it up there.

We were in for another treat as the trail goes right along the edge of the ridge and gave us some more incredible views of Dalton Lake. We knew that once we passed Dalton Lake, we would need to drop off of the ridge and down into Trio Lakes. I had forgotten to load the maps on to my GPS, and so we were using a paper map to navigate. We thought that we recognized the land features that we could see on the map and dropped off of the ridge down into a drainage. It turns out we weren't where we thought we were. We dropped into the wrong drainage. By this time it was late afternoon and we decided to just camp where we were. There was still a stream flowing through the basin and we set up a little ways from it. It was really a beautiful area! Sometimes you might make mistakes with your navigation, but it leads to amazing places. This place was one of those! It was a nice feeling knowing that most likely no one had ever camped there and possibly no one would again. It was that random. We moved around to stay in the shade and enjoyed the rest of the afternoon. By the time it was getting dark, we were in our hammocks.

Even though we were camped in the wrong spot, there was no doubt what we had to do to get out. It was right in front of us.... once again we had a long steep climb to get back up to the State Line trail. We'd then follow it all of the way back to Hoodoo Pass. It was incredible hot and there were no water sources between our camp and the trailhead. When we started the hike back we were all carrying our full capacity of water. The hike back up to the trail was tough. A rough way to start the day. Then we just had 7+ miles back to the trailhead. The views were amazing as we walked the ridge about Dalton, Heart & Hidden Lakes. The heat had taken a toll on us all by the time we got back and the first thing we did was all jump in the car and drive down off of the pass and find a creek to get in.

It was a great trip, but there is some unfinished business. We'll be back!