Ok, this is more a report based on a trip of hikes from two bases (Vernal for the Dinosaur NM and Moab) than a continuous backpack report, but hey I’ll admit it’s an excuse to post my favourite photos. But hopefully people will like them, as picking the best means they’re of better quality than lots from the same hike & I’m sure they’re of more interest than my words. I really wanted to see Dinosaur after seeing some great photos of it & hoping it would be a little cooler than more southern areas of Utah for an August visit during my children’s vacation.
First we headed along the Yampa Bench Road, stopping at several incredible panoramic viewpoints on the rim of the Yampa river. 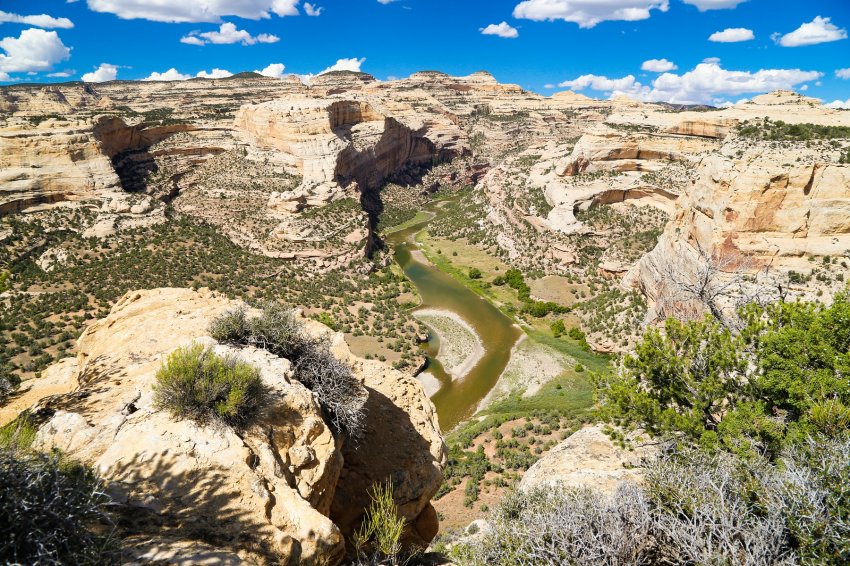 Then I returned two days later hoping to reach the river but got down Red Rock Canyon to within a mile of it before surrendering to the increasingly dense vegetation.
So that afternoon we hiked to Ruple Ridge, but on returning to our tents just off the Yampa Bench Road we found rangers parked up and waiting for us. After a long conversation in which we were initially told we were being let off fines with a warning, we ended up with a fine after being told it was forbidden to camp or hike to where our tents had been left.
The next day we took this up at the visitor centre and not only was the fine rescinded but a more senior authority said I could hike to where I’d intended to go, something I did during two nights’ camping at the Echo Park Campground. As you can see, I was very glad I’d queried the decision, although unfortunately forest fires in California and Oregon meant the view was more hazy than normal.

For the next sunrise I got up to a great viewpoint taking in our campsite and Steamboat rock.

On the return to Vernal we took in the Harpers Corner Overlook trail where I took this pic, which I only appreciated after returning home. I love the colours, the geologist’s fantasy, and the fact it looks like my one year old has flicked green paint flecks over the picture. 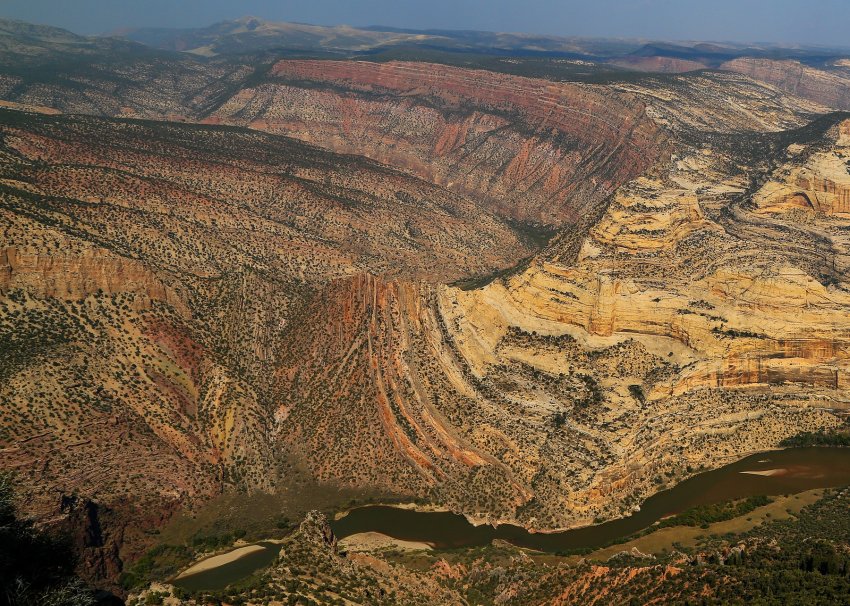 Before leaving Vernal we took the opportunity to go to Fantasy Canyon & were alone there for sunset. It’s a weird place, and it’s lack of colour almost gives a surreal quality as the pictures look like they were taken in black & white apart from the clothing of my family. 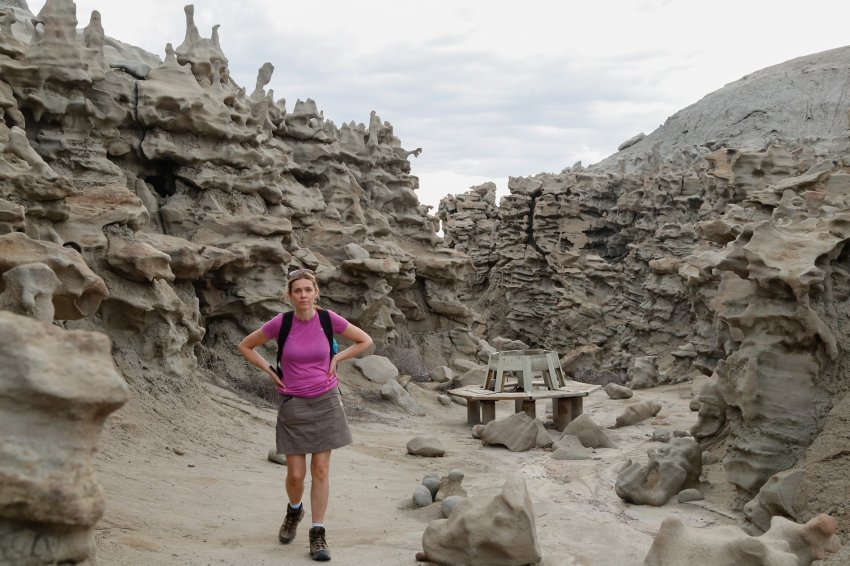 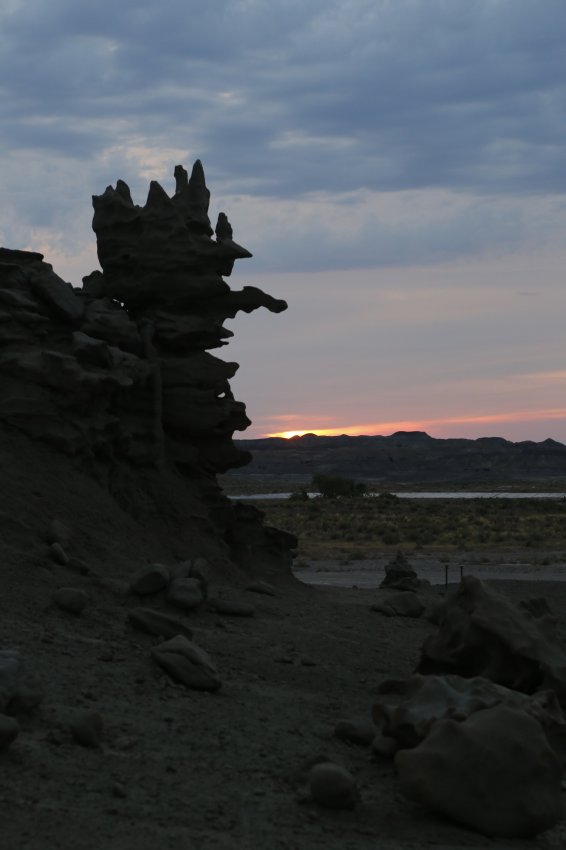 Our next little drama came on a visit to Flaming Gorge where after a puncture we followed it up with the misfortune of the light control dial falling through the dashboard. We were still on top of a mountain 50 miles from our Vernal motel with less than an hour to darkness and no headlights and two young kids in the back, so I think my “misunderstanding” of the speed limit was excusable to get us back before darkness just in time since we had no lights.
Flaming Gorge was beautiful - I can’t believe the ranger told me he’d never bothered coming to work an hour early to see this view at sunrise. 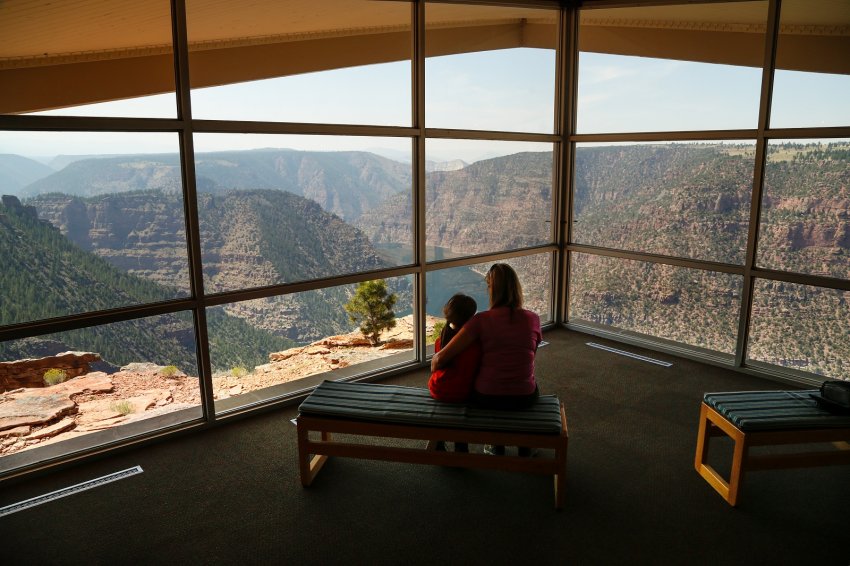 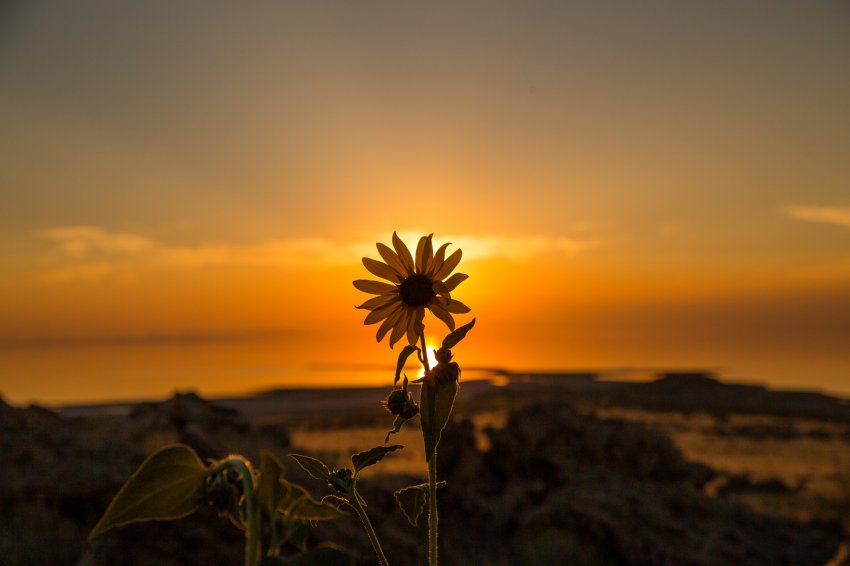 we travelled on to Moab via an overnight at The Wedge, again being alone there as we explore viewpoints along the rim of the San Rafael.

Jack then kindly took me for a night’s camping at Big Pocket Overlook which his vehicle was better suited to. Despite a violent storm in Moab surprisingly the road was passsable. By the morning there were breaks in the cloud which provided interesting skies and light. 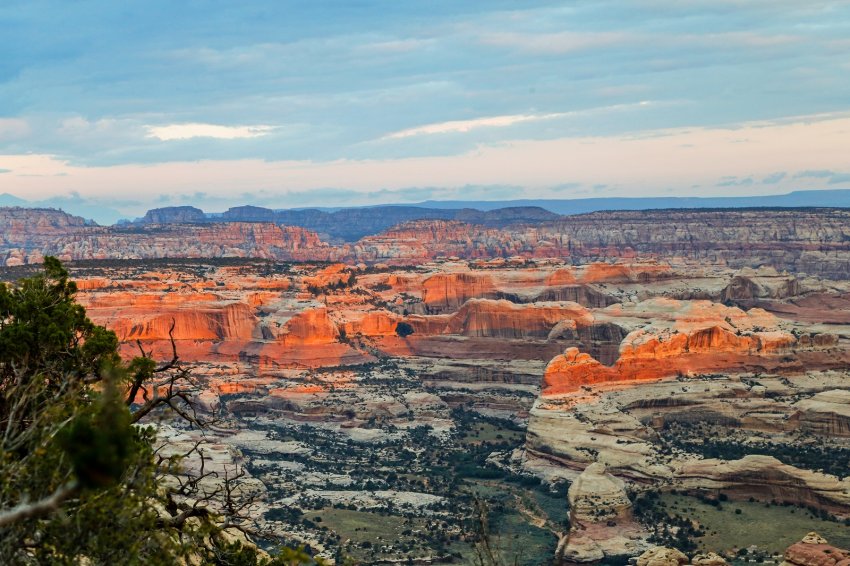 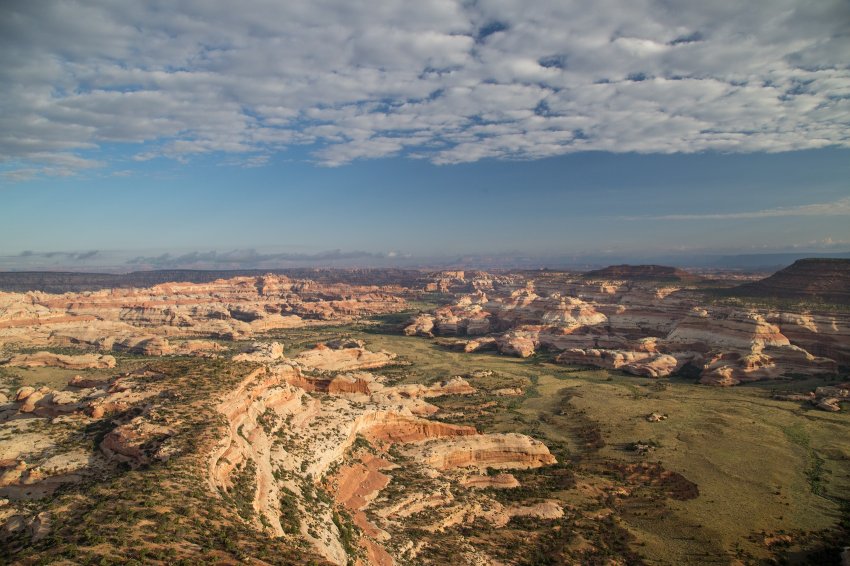 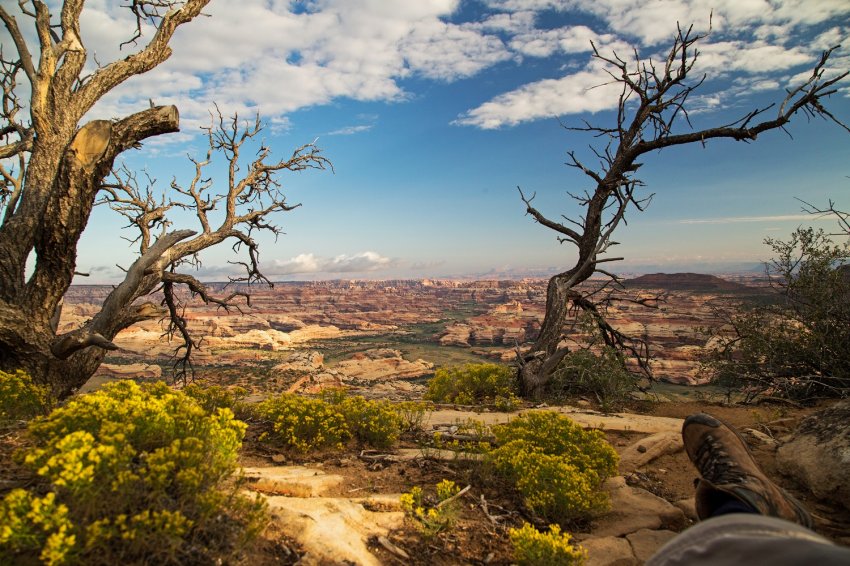 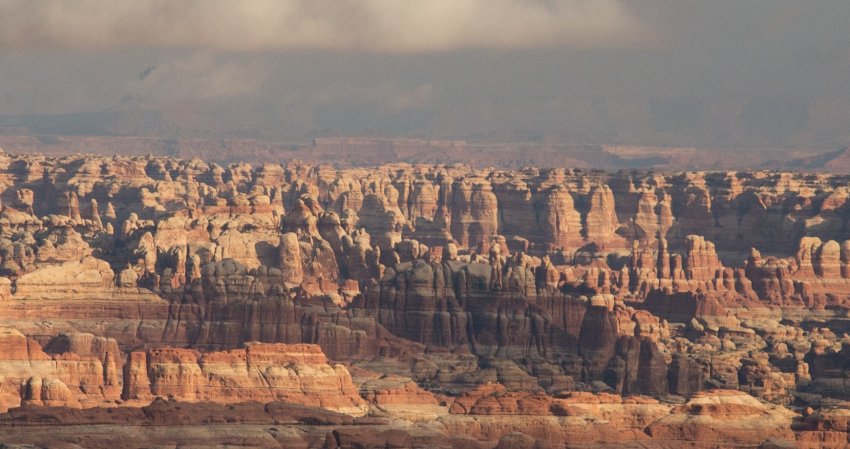 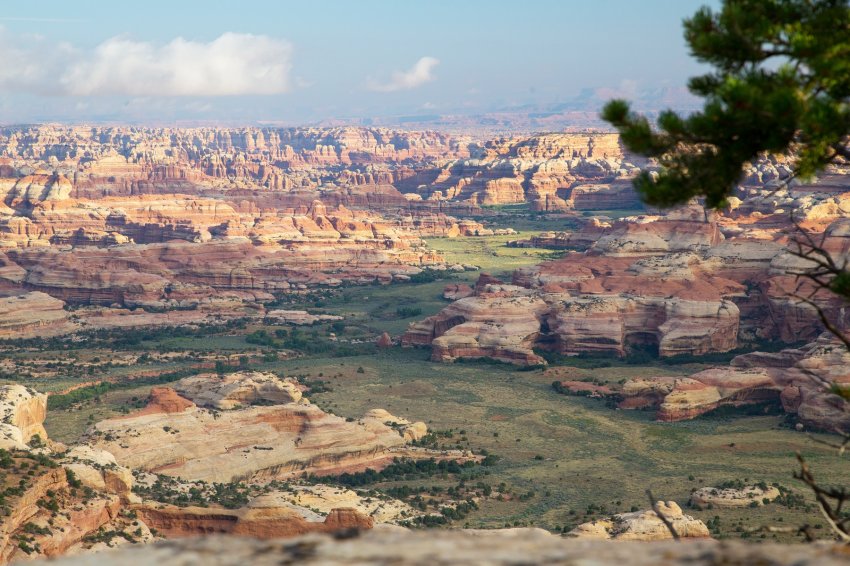 The final few days were spent enjoying Negro Bill Canyon where we had Morning Glory Arch to ourselves for several hours, 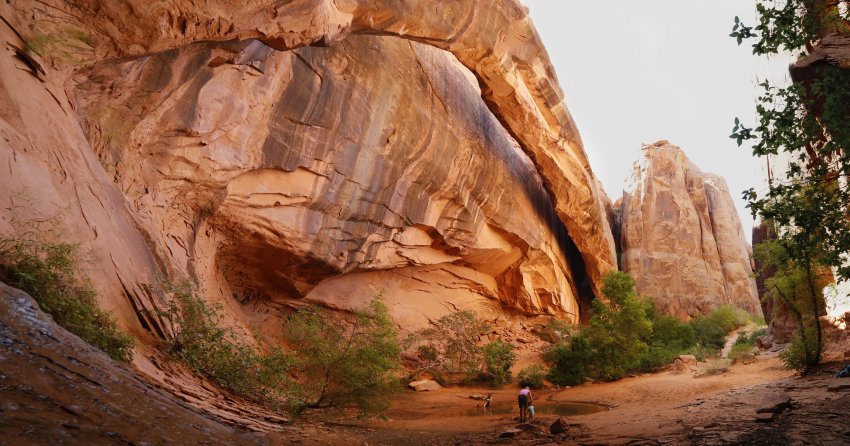 then I went camera-clicking at sunset through Arches NP while my partner and 8-year made their first visit to Delicate Arch, 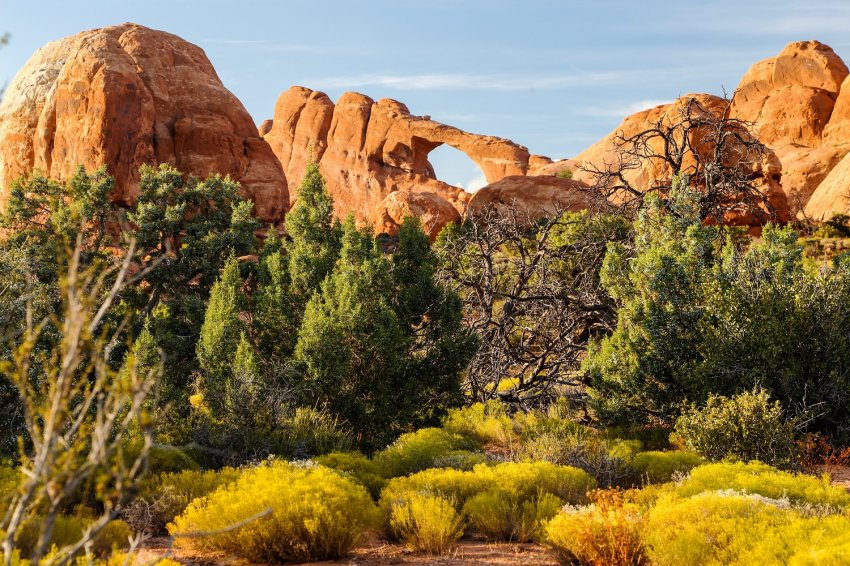 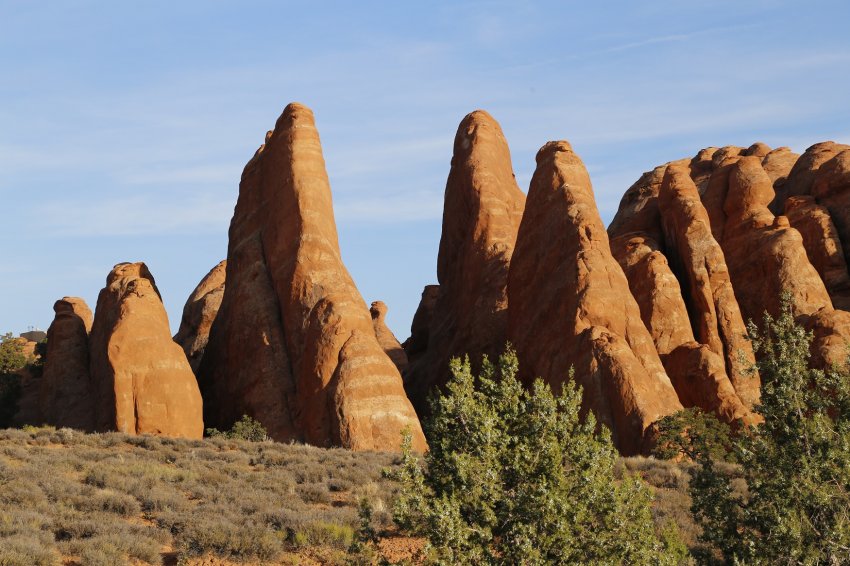 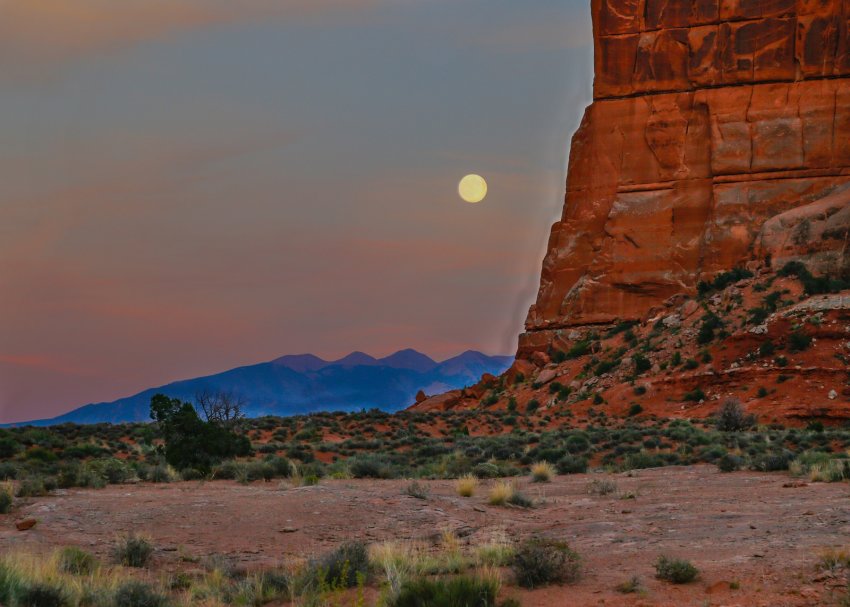 and again alone again hiking on Poison Spider Mesa. I’d always wanted to see the views of Behind the Rocks from there, but with no trail near the rim it was a question of trial and error as to which slickrock domes wouldn’t become too steep to halt my progress. It took much longer than I expected to finally get a a high point looking across the Colorado, which I managed just as the sun was setting. I probably should have left myself more than 3 hours to give myself time to try out more ways up on to the top of the domes (I had tried plotting way beforehand through Google Earth) as it would have nice to have been able to see down to the river as well as over the other side of it. But I really wanted to get that orange glow sunset shot, so once I’d found my reasonable place I may not have abandoned it anyway to gamble on testing others out - which may have led to more too steep ascents. I guess the answer is to spend the day looking around, and then return to the favourite vantage point for sunset. But to anyone going up there - there are virtually no footprints and lots of cryptobiotic soil so take care not to ruin a pristine area. I tried to follow tiny washes but that’s not always the shortest route. 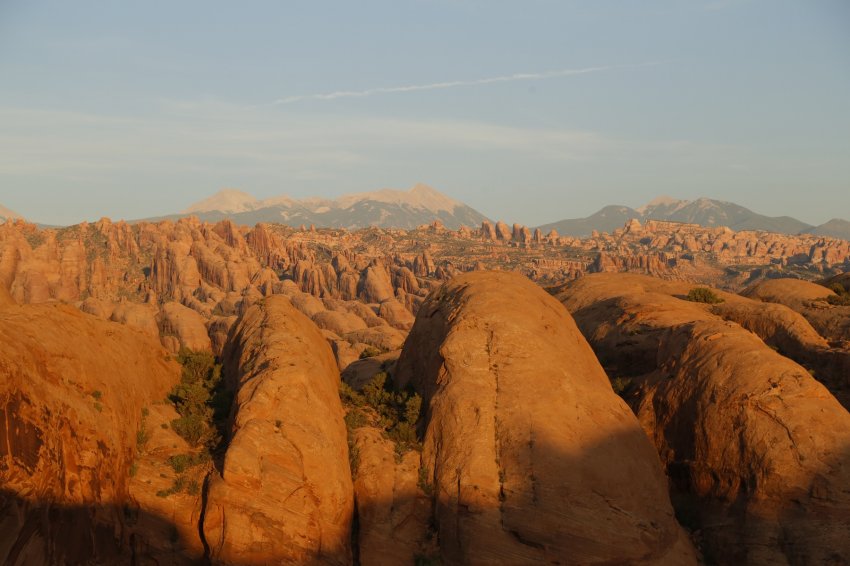 Heading back to the parking lot there was the beautiful end-of-vacation shot of the river, although I’m kicking myself for not stopping a few minutes later to shoot a possibly even better bright full moon which had emerged just above the opposite rim, thinking that might be pushing the patience of a hungry and tired family in our car.

It doesn't have to backpacking to be adventure...case in point, your TR. Thanks for sharing. Awesome photos!
Salud!

Fantastic!! I have not seen enough of Dinosaur. Those pictures are beautiful.
IG: @backcountrypost

Wow. Great stuff. I love Dinosaur N.M. and am intending to correct the fact I haven't explored it enough. Thanks!
Art

That's a pretty ambitious Utah itinerary. Nice! Red Canyon on Flaming Gorge is even better from the water.

Excellent TR. It was a pleasure camping with you and your wonderful family. Hopefully we'll get to do it again.

I'm glad you got to see what I call Tom Till Kiva. It is commonly known as False Kiva. I first hiked there in 1991 after seeing the picture on a calendar.
Onward through the fog.

Wow, 24 years ago, you must have been one of the first as only people who have seen pictures go. In all my visits to Canyonlands I'd never been as it's not on park maps or trails. Although it is in one popular book now so could see more visitors but we were alone for 3 hours there. We nearly missed the small upper cave with the stone ring though! We sat in the lower giant one eating lunch and assumed the stones had been kicked down until I went exploring higher to take pics. Was a bit hot in August hiking back up though with Dylan on my back - good job it's not a long hike

Thanks for sharing, Dinosaur NM is a great place. I have contemplated returning for a few years now, but always put it off, so maybe it needs to happen a little sooner.

Wow, it looks like you saw so many different places in one trip. Great sounding trip. Great photos too.

Great Pictures!!! thanks for sharing.
You must log in or register to reply here.
Similar threads