Zion NP opened up today for day hikes only. Most services are still limited, and there is no backpacking or permit hikes and climbs. I totally anticipated the soft opening because I missed my outings along Kolob Terrace Road. As soon as the park opened today, I decided to hike the Connector trail, starting at Hop Valley trailhead and going all the way to Northgate Peaks and back.
It was an easy 11.4 miles out and back with 1600ft of elevation gain. The nice higher elevation was an additional reward to all the extreme temperatures we had in the last 2.5 weeks. I had high hopes to see some wildflowers and wasn't disappointed at all. There was so much out, and I had to stop all the time for pictures.
I have to repeat the hike next week before the flowers are gone, and it's getting too hot again.

The drive up KT road this morning was a real pleasure, only a few cars on the road. Most of the trailheads were open again, just trailheads like the Subway were still shut down with barricades. Not sure if this alone is enough to prevent people from entering the area illegally, but we'll see. I parked at Hop Valley trailhead and was the only car so far.
I grabbed my gear, passed an informative sign at the beginning of the trail, and started my hike. 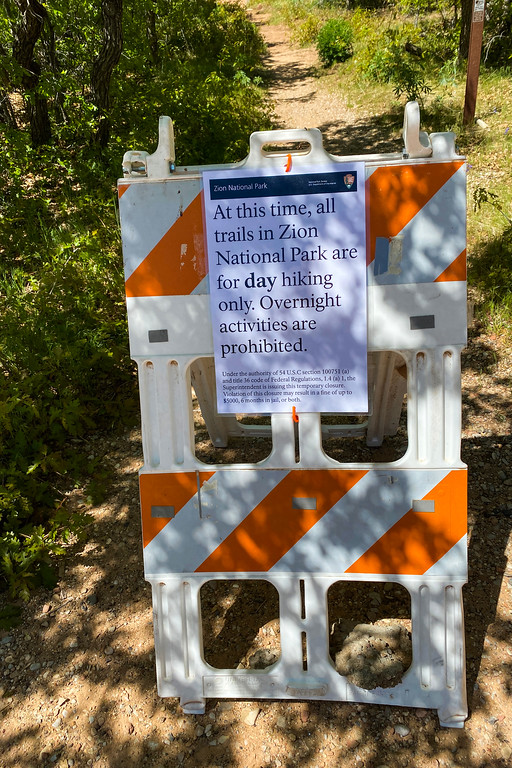 I've really missed hiking along KT Road. Zion Canyon is just too busy, and I leave it to the tourists visiting the area. My time to shine in the Main Canyon is during snowstorms and massive rainstorms when the tourist stay away because they only want to have blue sky days, lol.
As soon as I was on the Connector trail, I encountered flowering lupins all over the place. So cool!!! 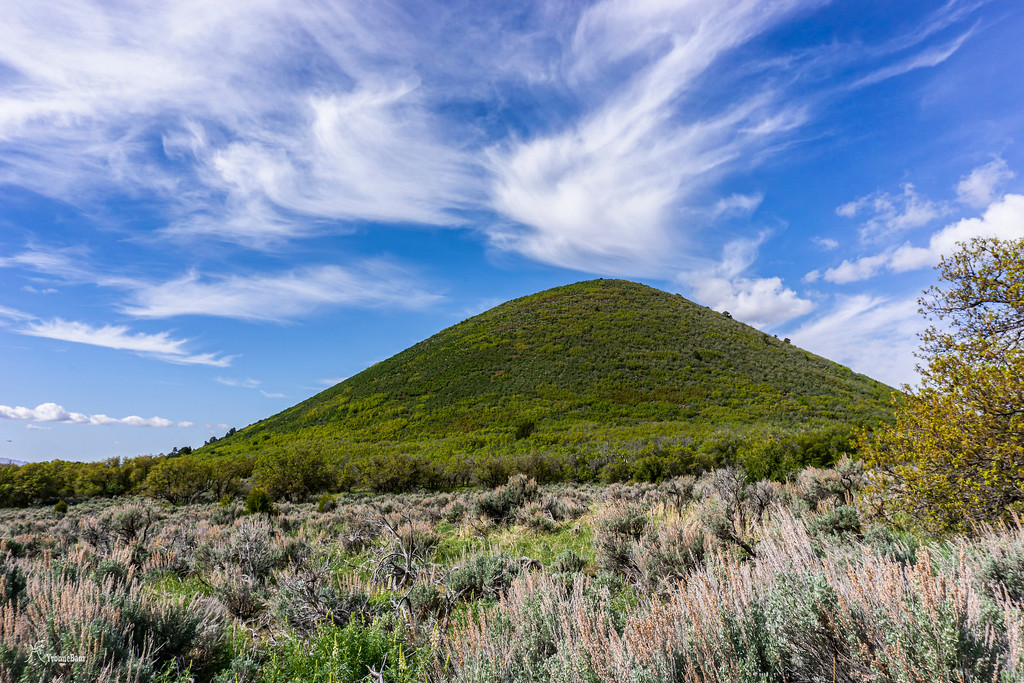 some nice clouds above Spendlove Knoll 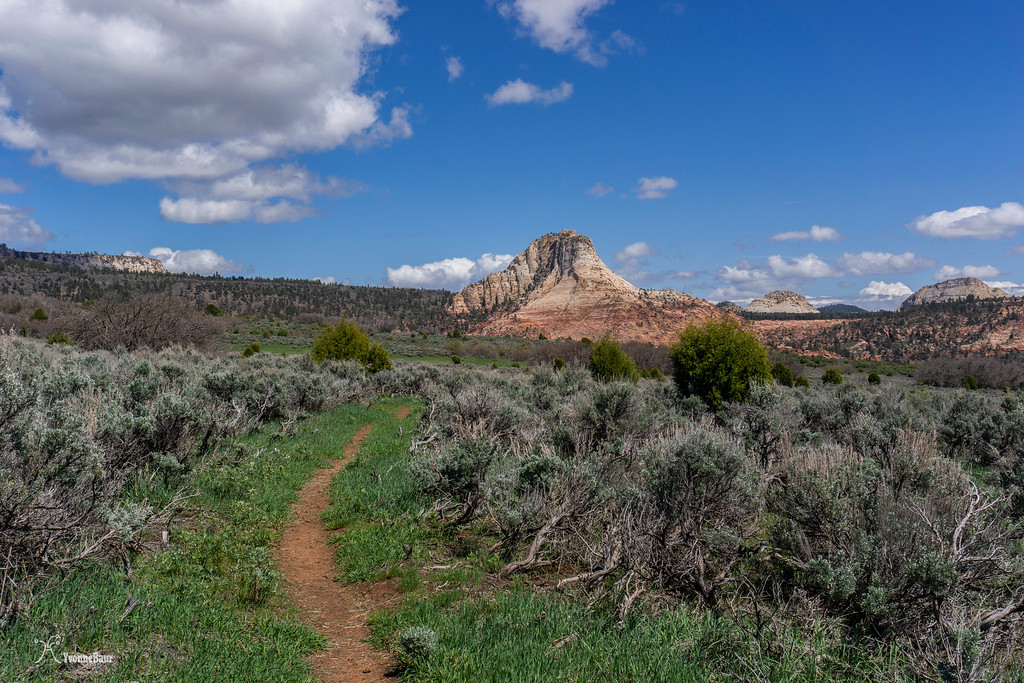 The trail was sandier than I remembered it, and I hated myself that I picked my lightweight mesh-covered trail runners today. They were not the best choice for sandy trails.
Anyway, I had to stop all the time because of all the wildflowers I encountered.
I soon found my first patch of Desert Phlox. 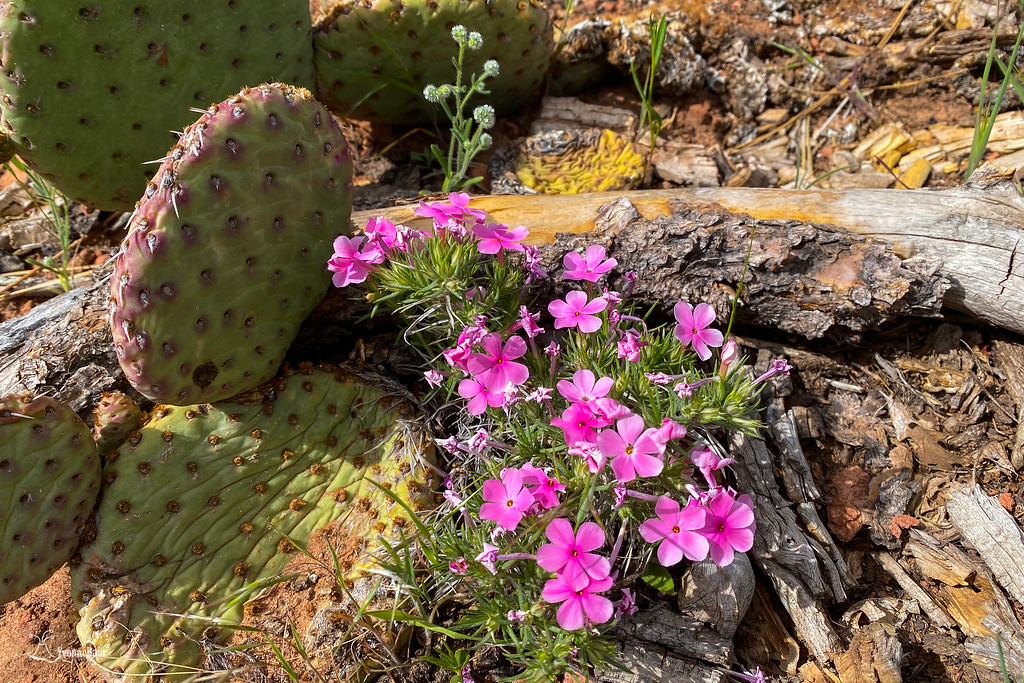 Everywhere was a lovely scent in the air, most likely caused by flowering Cliff Roses and Western Wallflowers. 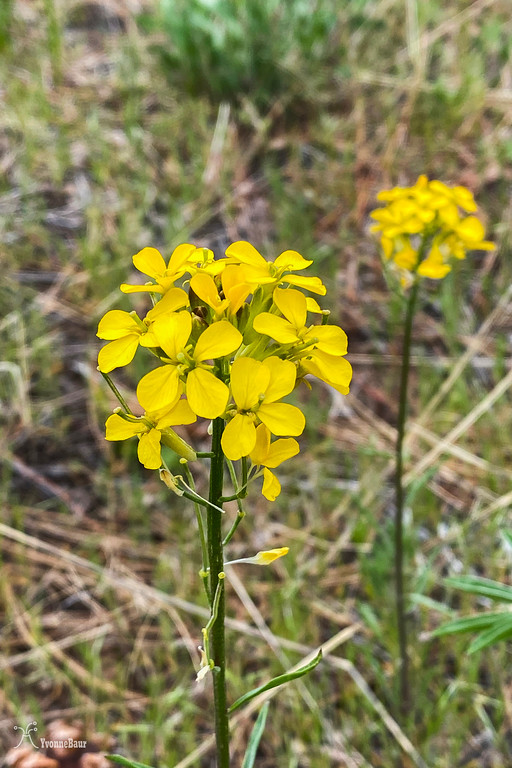 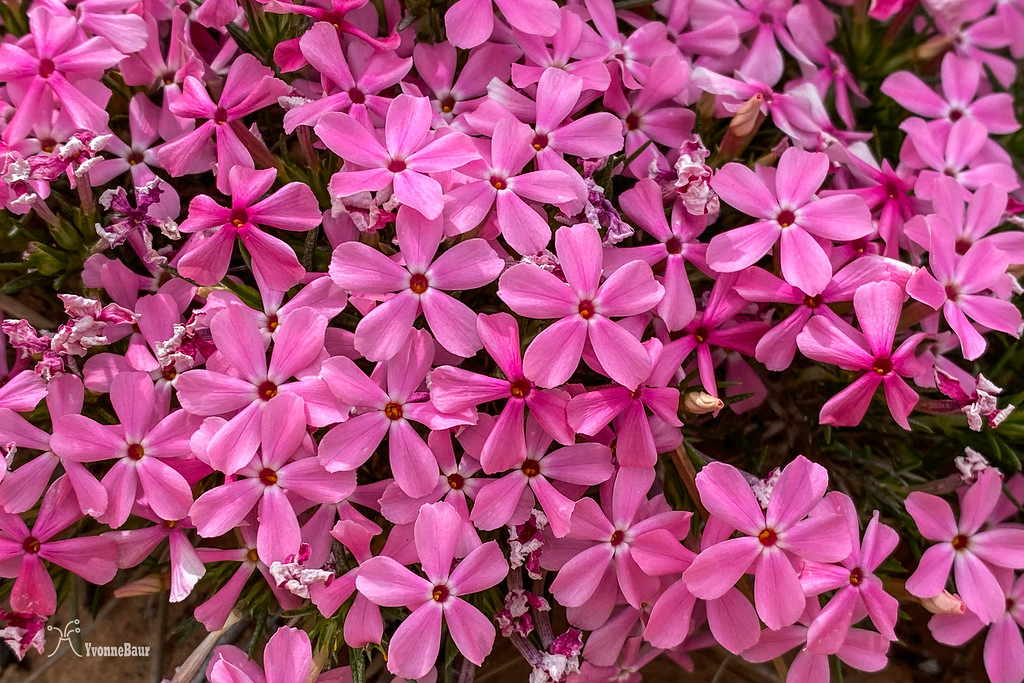 I found huge outcrops of Golden Peas flowering everywhere, it was just delightful and eye-candy to me. 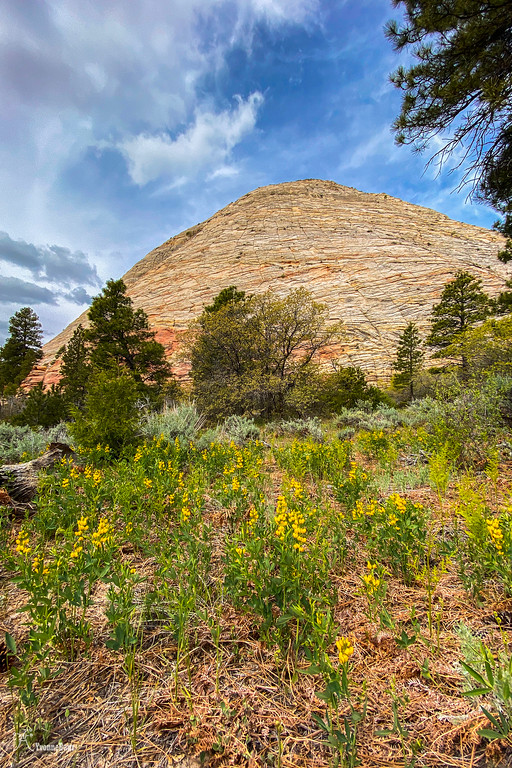 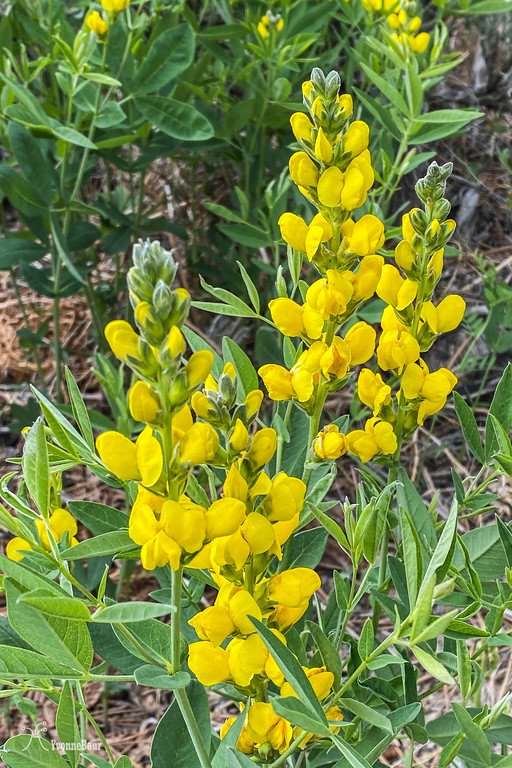 Part of the trail went through a forest of Ponderosa Pines, and I stopped to rub the bark again, which smells like vanilla.
One of my favorite gnarly pines was still there. 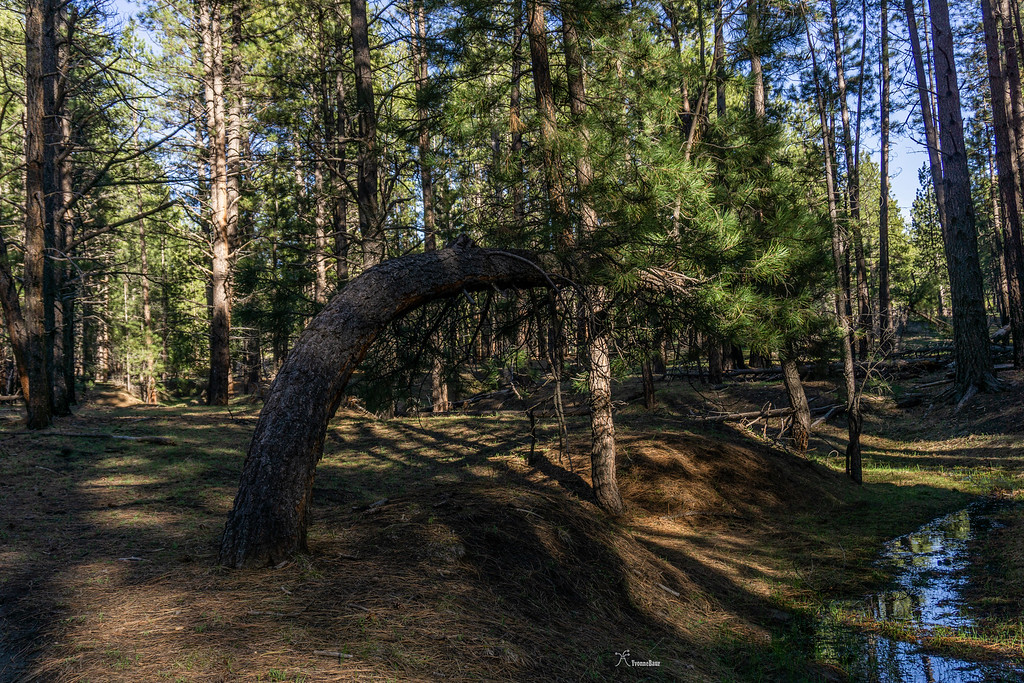 And more Golden Peas grew here in the shade of the huge Ponderosa Sentinels. Some were charred and blackened by fires and lightning strikes, but new life was growing right next to them. 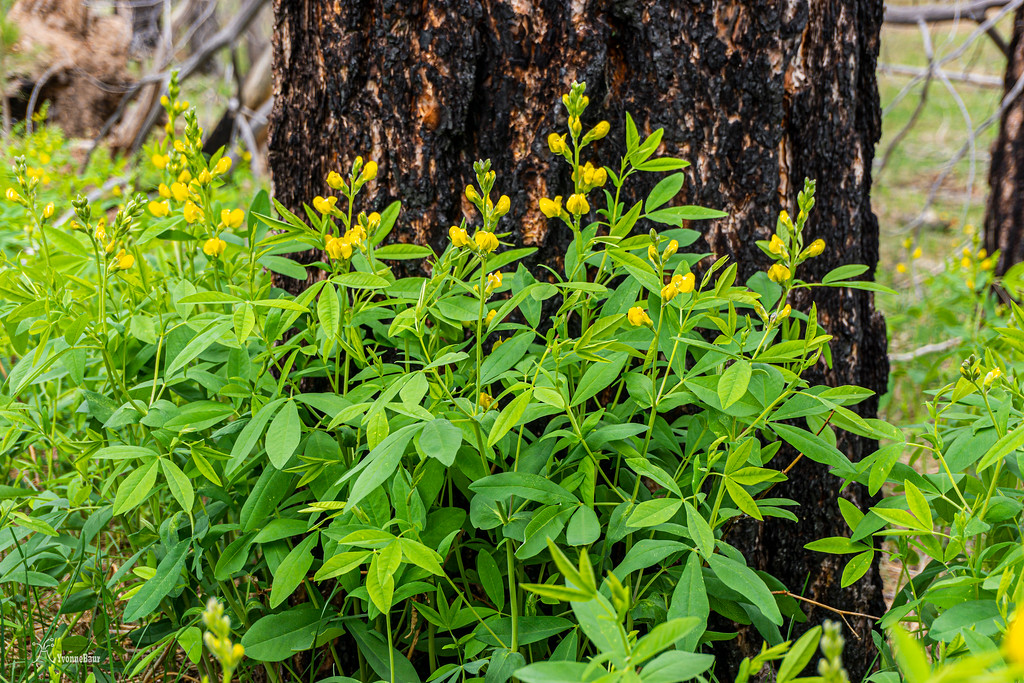 After I turned onto the Northgate peaks trail, I found the beautiful white flowers of bitterroot everywhere. This part of the trail stays moist for quite a while; the Showy Lewisia/Bitterroot liked it and grew in abundance. 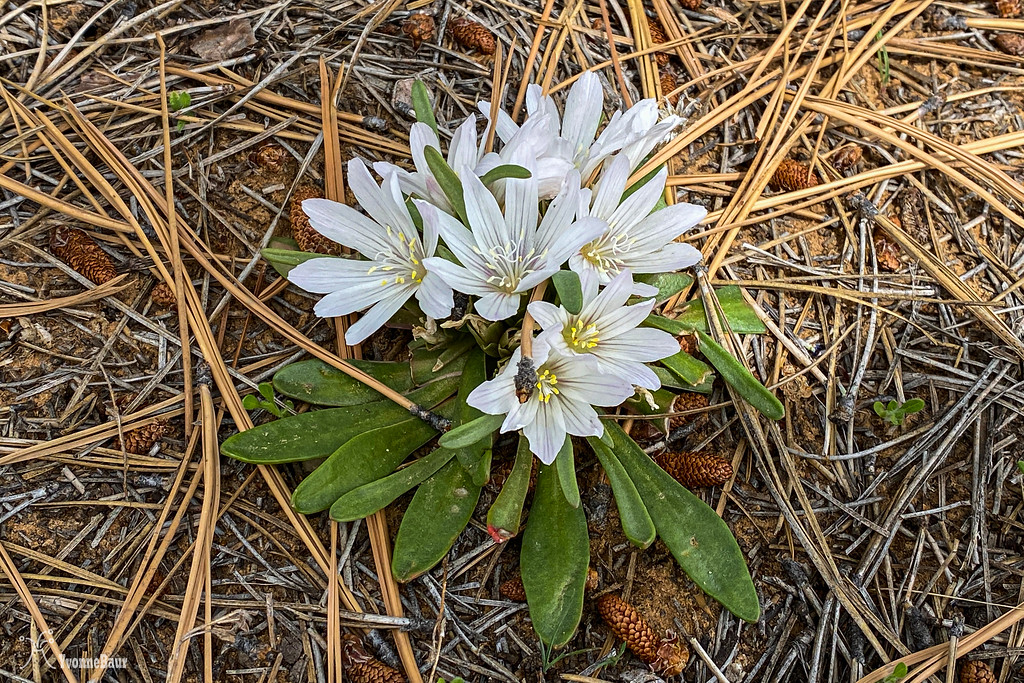 I also found a wildflower I haven't seen before, but it looked to me that it was the poisonous Foothills Death Camas. 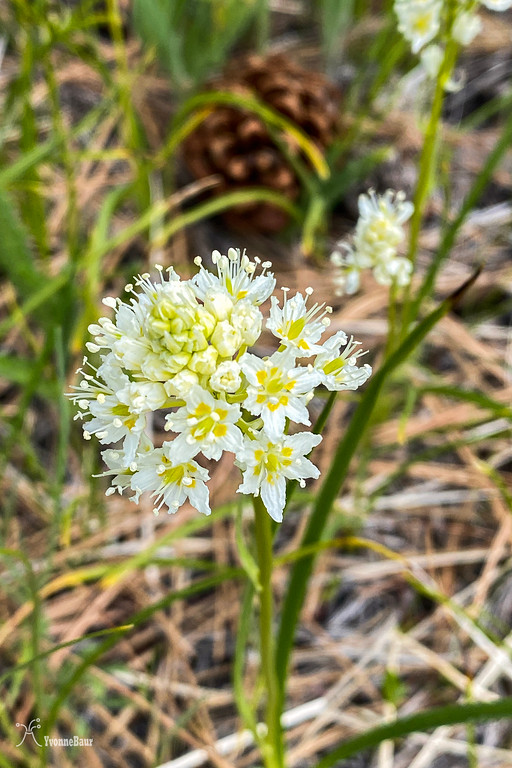 Soon after walking through a high plateau Ponderosa Pine forest, I reached the Northgate Peaks. The last time I was up here was in December, and I've snowshoed through deep snow. Now the entire area was covered in wildflowers, which is almost as good as snow. 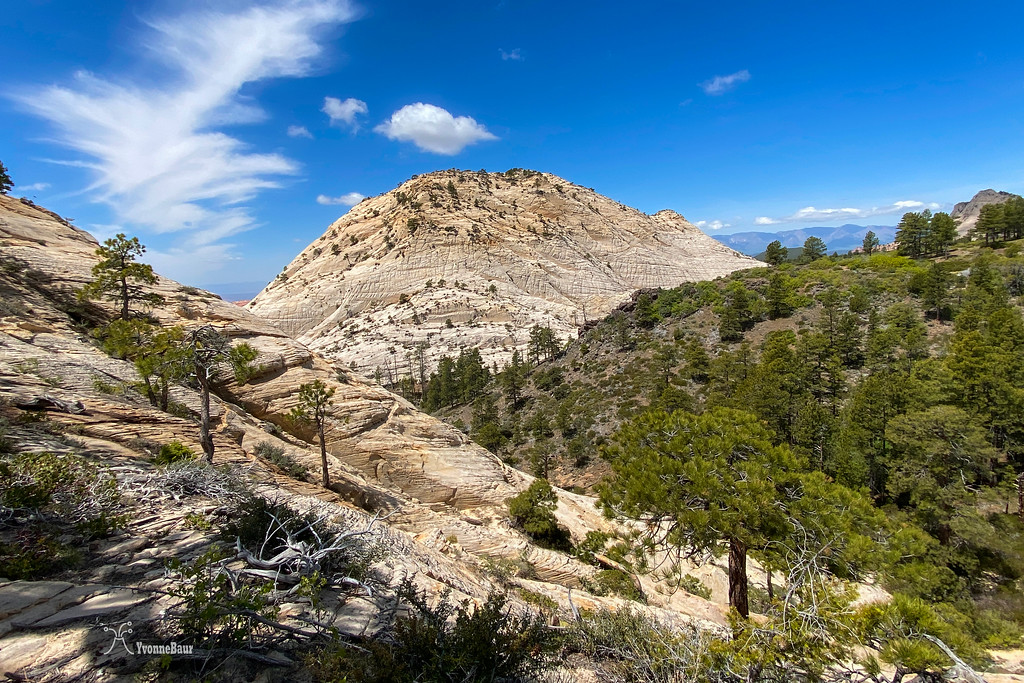 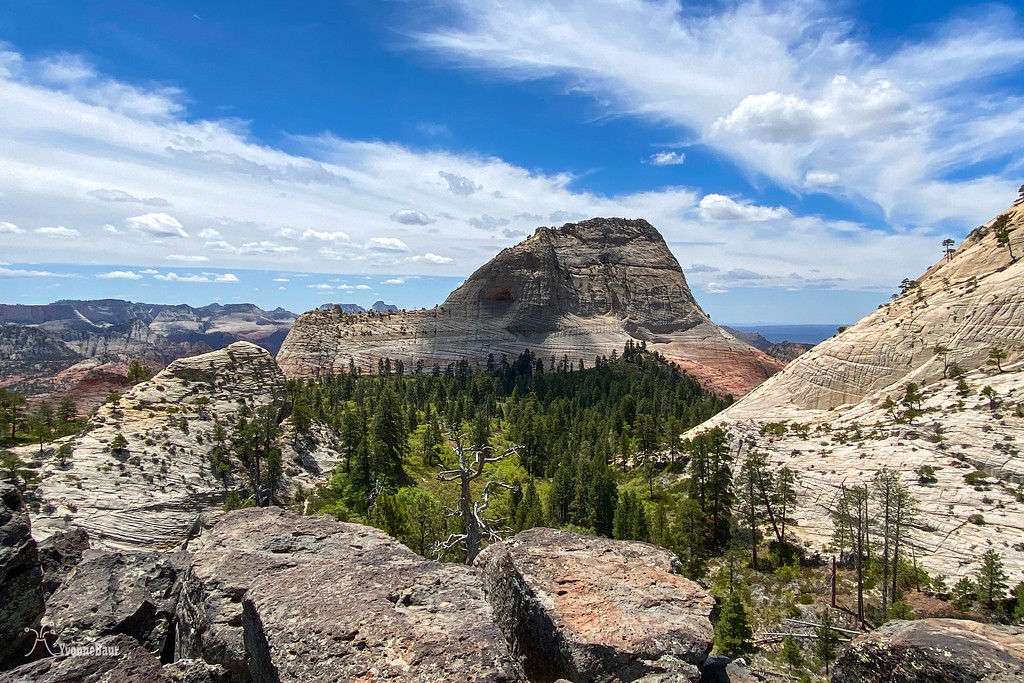 I admired the view on an outcrop of basalt and took a few more pictures. 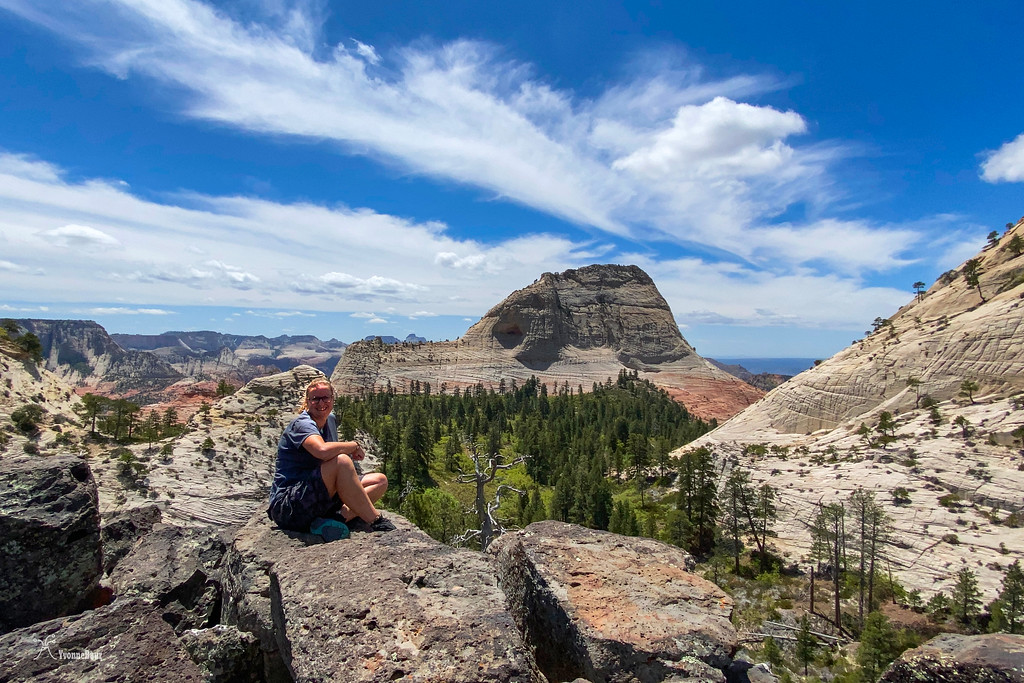 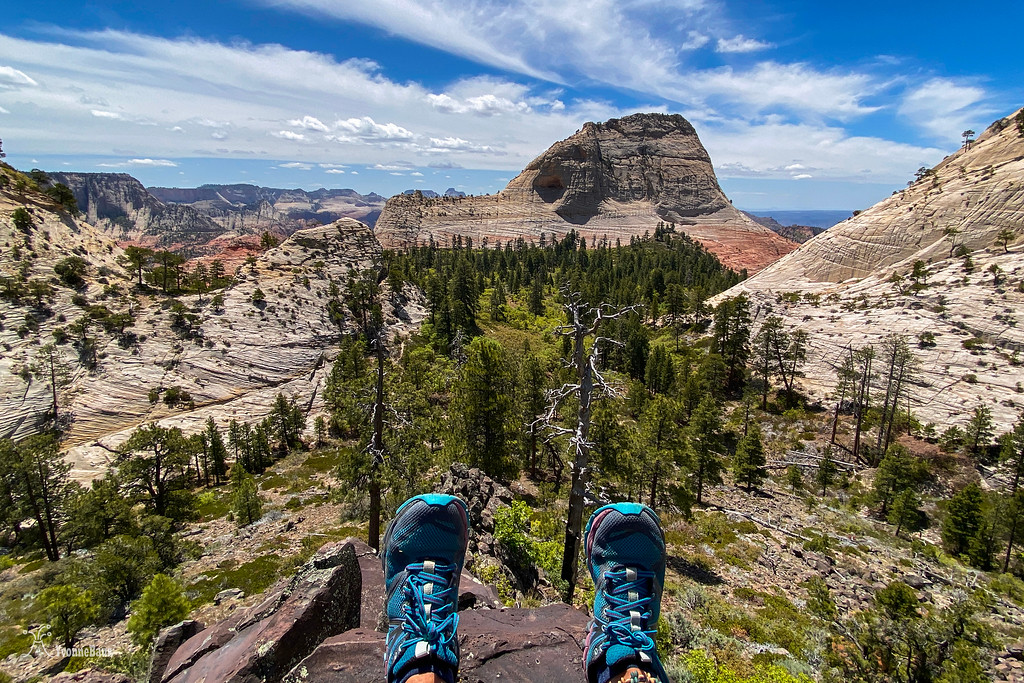 The hike back was pretty uneventful, and most of the clouds had disappeared. 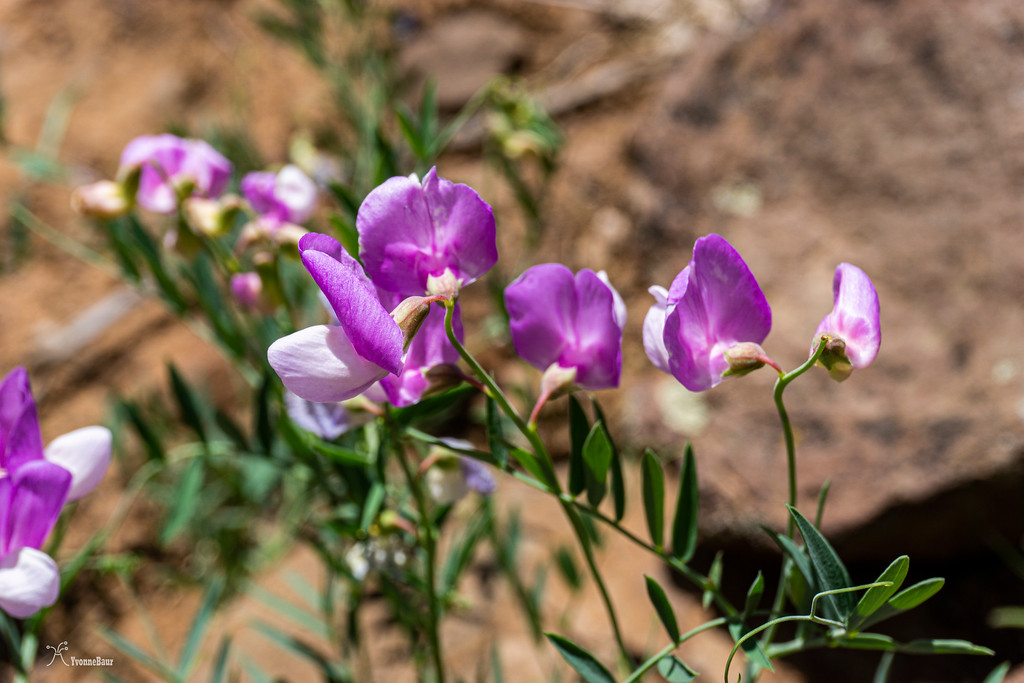 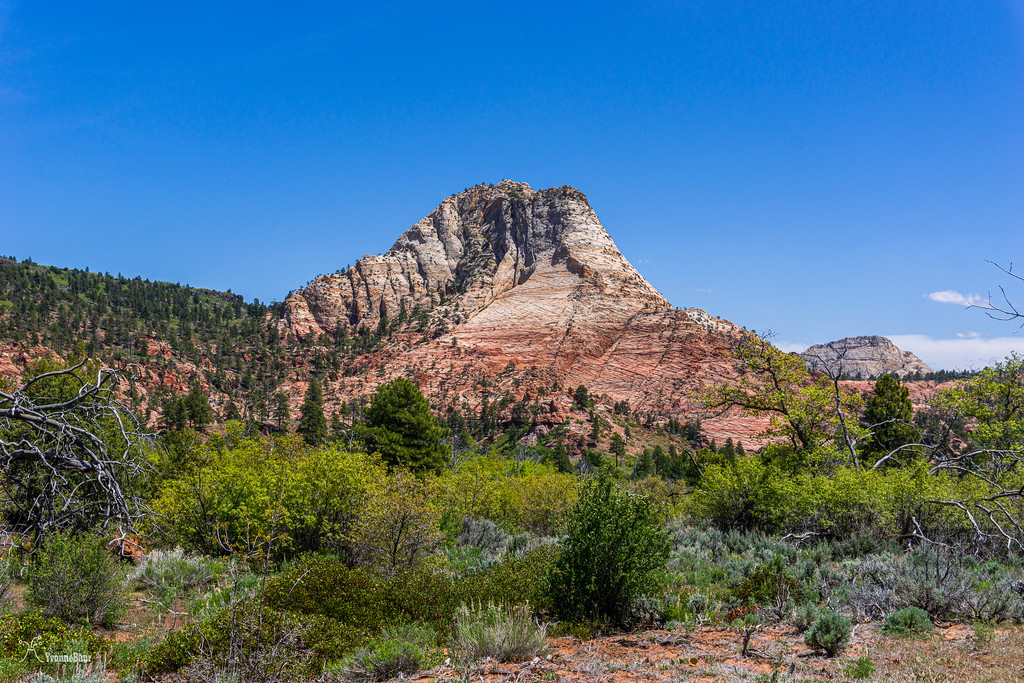 The backside of Zion was visible in the distance, and the meadows near Lee Valley were covered with flowering lupines as well. It was a pretty sight, and I love to hang out in this particular area during sunset. I hope to make it happen in the next few days. 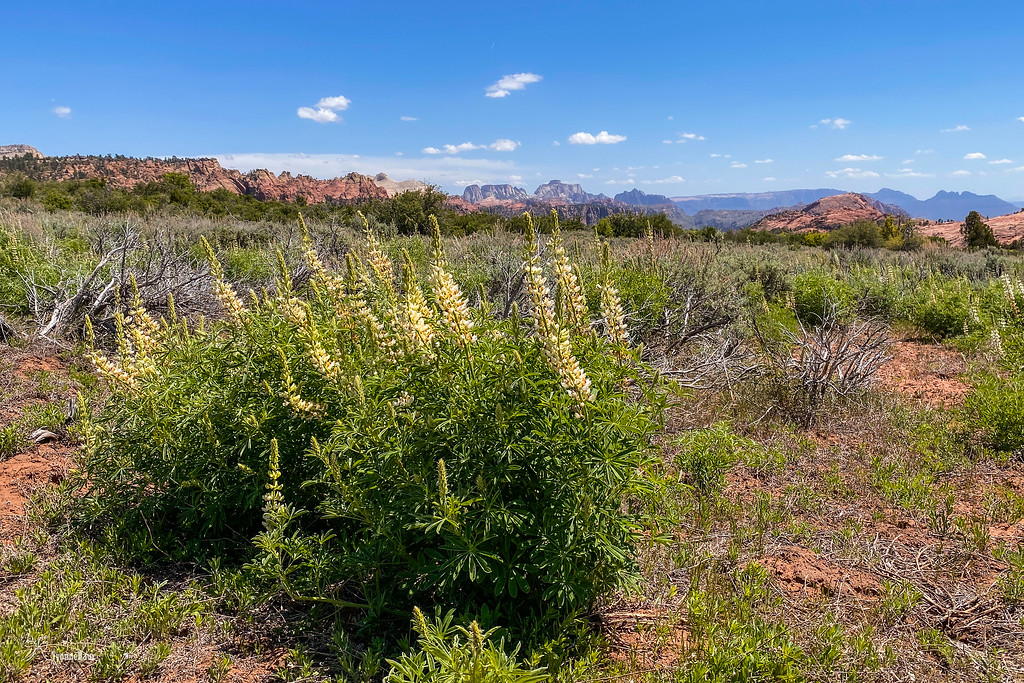 It was a nice outing, and I saw only two other people but tons of lizards, birds, and flowers. That's why I like Kolob Terrace so much because you see more wildlife and flowers than people.
I guess my next two hikes in the area will go to Grapevine Spring and Wildcat Canyon. I'm not ready for the crowds in the main canyon, and as long as I can hike somewhere else in the park, I will keep it that way.
http://yvonnebaurphoto.smugmug.com/
J

KT is such a special place! I want to head down Little Creek someday.

Thanks for posting. Looking forward to more pics of the area to pass the time until this fall. I'm surprised you didn't encounter more people. Looks like you scampered up east northgate too. A great view for a little bit of effort.

zionsky said:
Thanks for posting. Looking forward to more pics of the area to pass the time until this fall. I'm surprised you didn't encounter more people. Looks like you scampered up east northgate too. A great view for a little bit of effort.
Click to expand...

I'll post a few more pretty soon. Right now I'm taking advantage of the slightly cooler temperatures and since Zion opened up I can head to KT Road every day.
Yeah, I went up a bit on East Northgate, that was my lunch spot and I like the view from there.
http://yvonnebaurphoto.smugmug.com/

so, I could hike the West Rim trail as a dayhike?

Yes. That trail is open. You would either need two cars or rent a shuttle to the TH to do as a thru-hike. Depending on your speed, it takes anywhere from 8-12 hours. Or you could just do an up and back partial hike from the main canyon but you'd better start early to beat the heat

Carcass said:
so, I could hike the West Rim trail as a dayhike?
Click to expand...

absolutely!! That's what I did today. I hiked West Rim from Lava Point to Cabin Spring via Telephone Canyon and back.
Because I did not have a shuttle I did the out and back. Totally awesome and wonderful 19 miles of hiking. It took only 8 hours
http://yvonnebaurphoto.smugmug.com/

All those flowers brightened the end of my day.
You must log in or register to reply here.
Similar threads