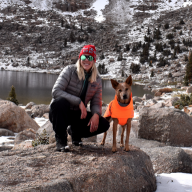 After seeing Scatman's post on exploring the old Pack Trail in Hell's Kitchen Basin, I wondered if anyone had been up to see how this old trail fared after the Box Fire of 2016. I was able to find a Geospatial PDF of the old map showing the pack trail on USGS' website. I brought it into Garmin Basecamp and made a GPX Track over the pack trail and downloaded that onto my Garmin Astro handheld, my Garmin Fenix watch, and onto the Gaia phone app. I also downloaded the Geospatial PDF of the old trail into the Avenza phone app. It helps to have redundancies. 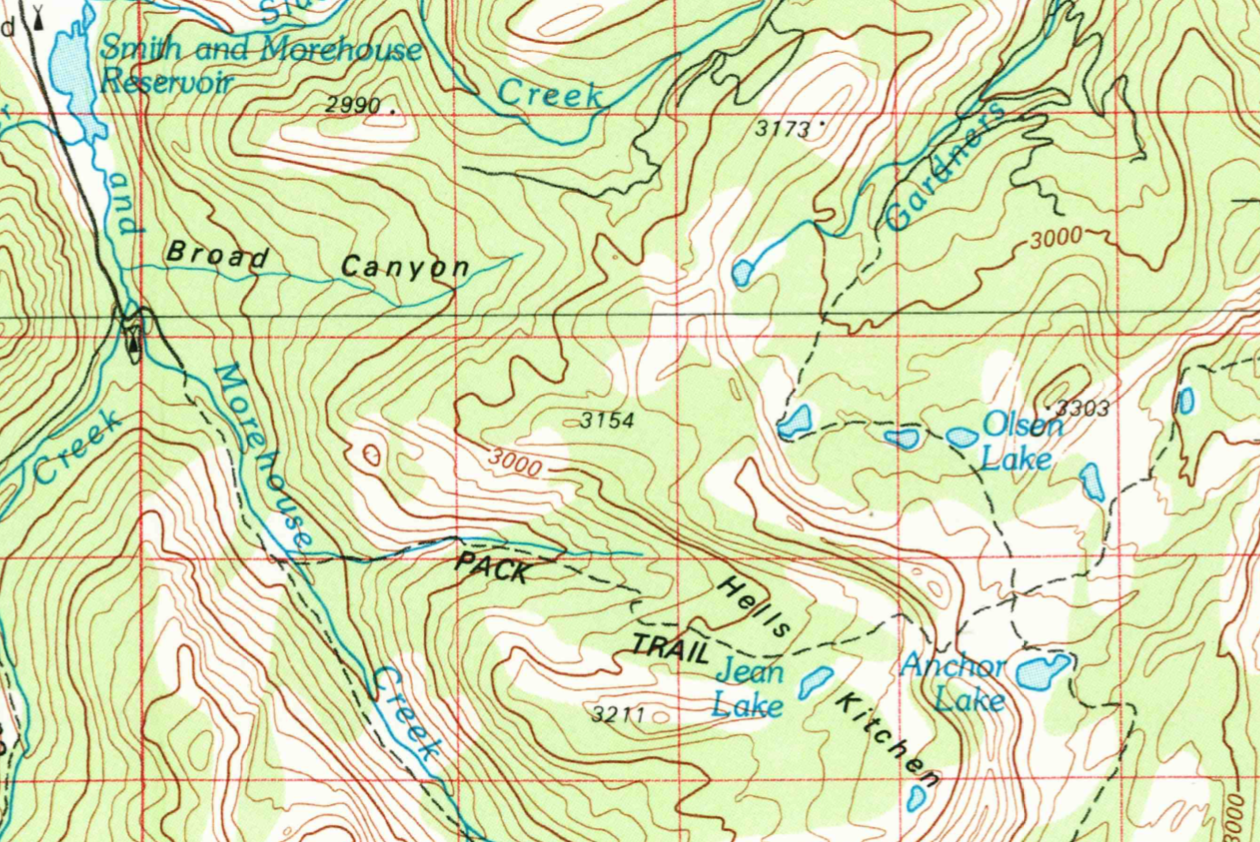 Knowing the old trail split from the main Smith and Morehouse trail a little over 1 mile up I decided to see how accurate the GPX track was. Turns out the old map wasn't too accurate as I missed this split and went a bit further up the main trail only to bushwhack down to the fork of the creek then to find the old pack trail. 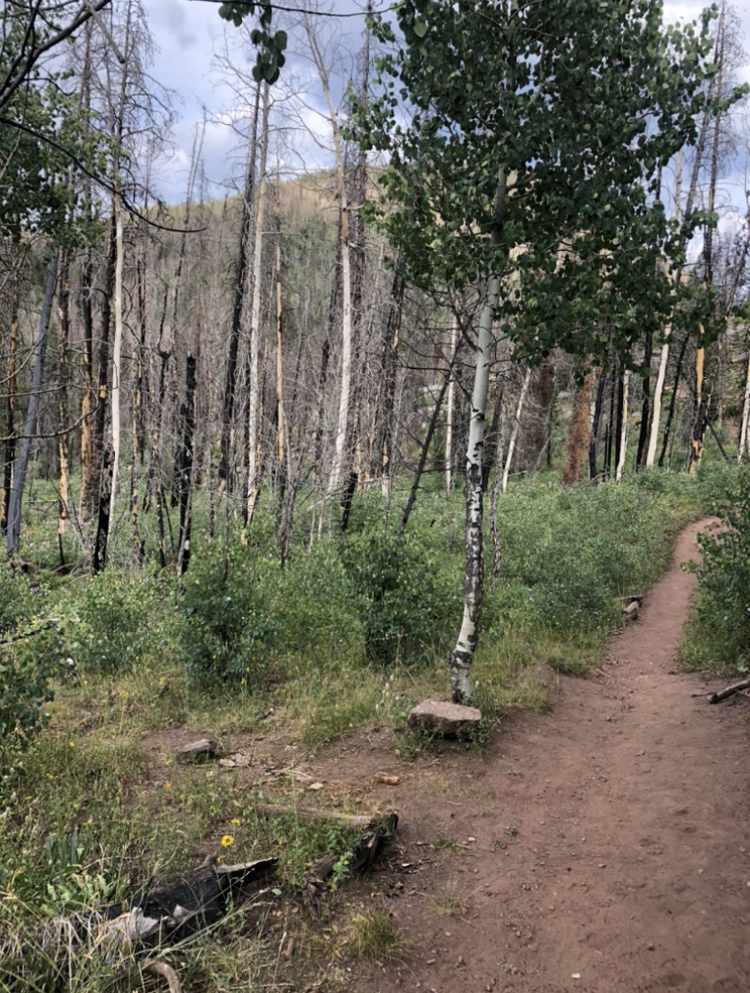 I think this stone used to be a cairn showing the fork and there was a small log across the old trail making it easy to miss. 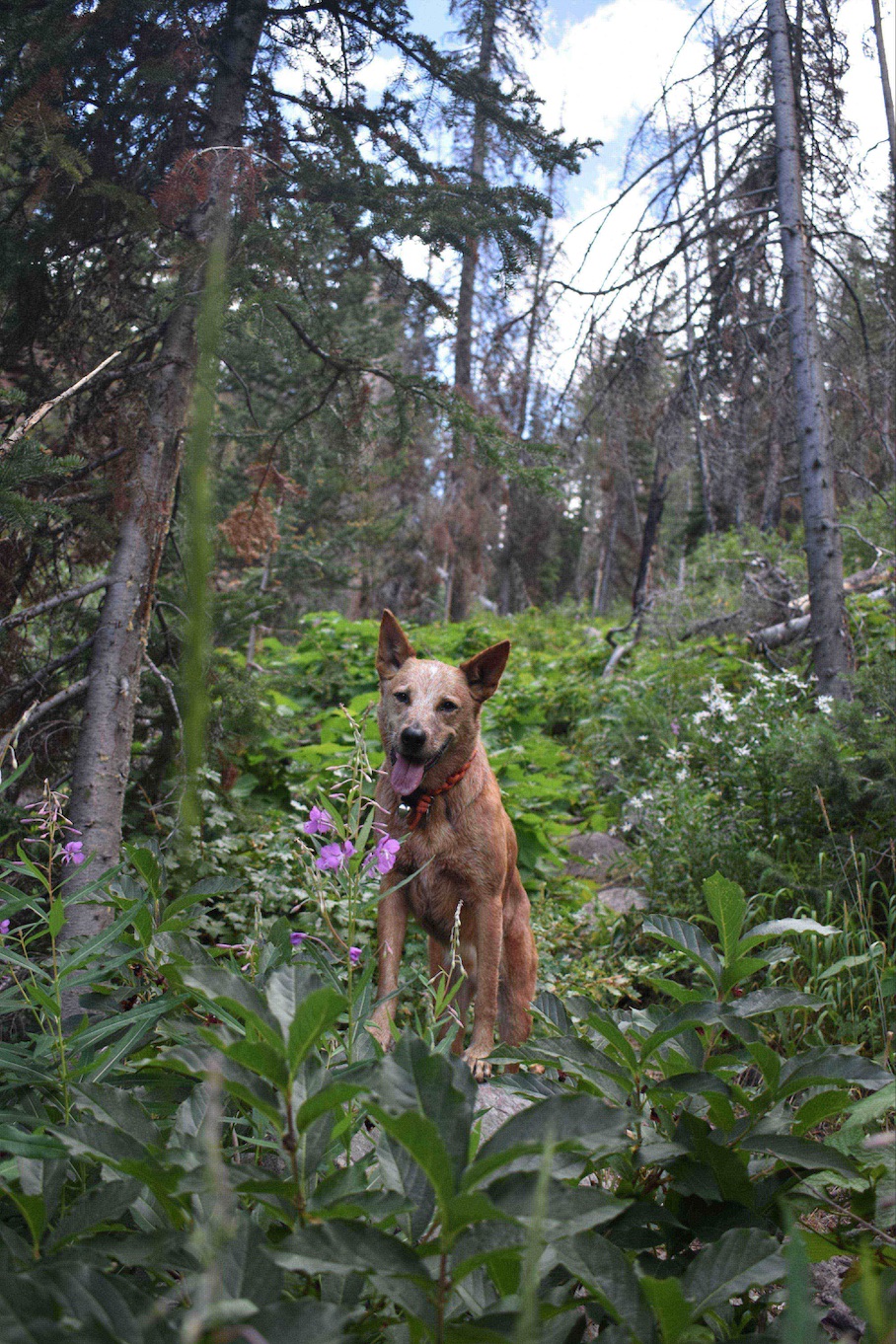 My trail and K9 Search and Rescue partner, Redford (@redfordtheredheeler on Instagram), is standing on the old pack trail. Hard to spot, but once you find it it's fairly easy to follow. 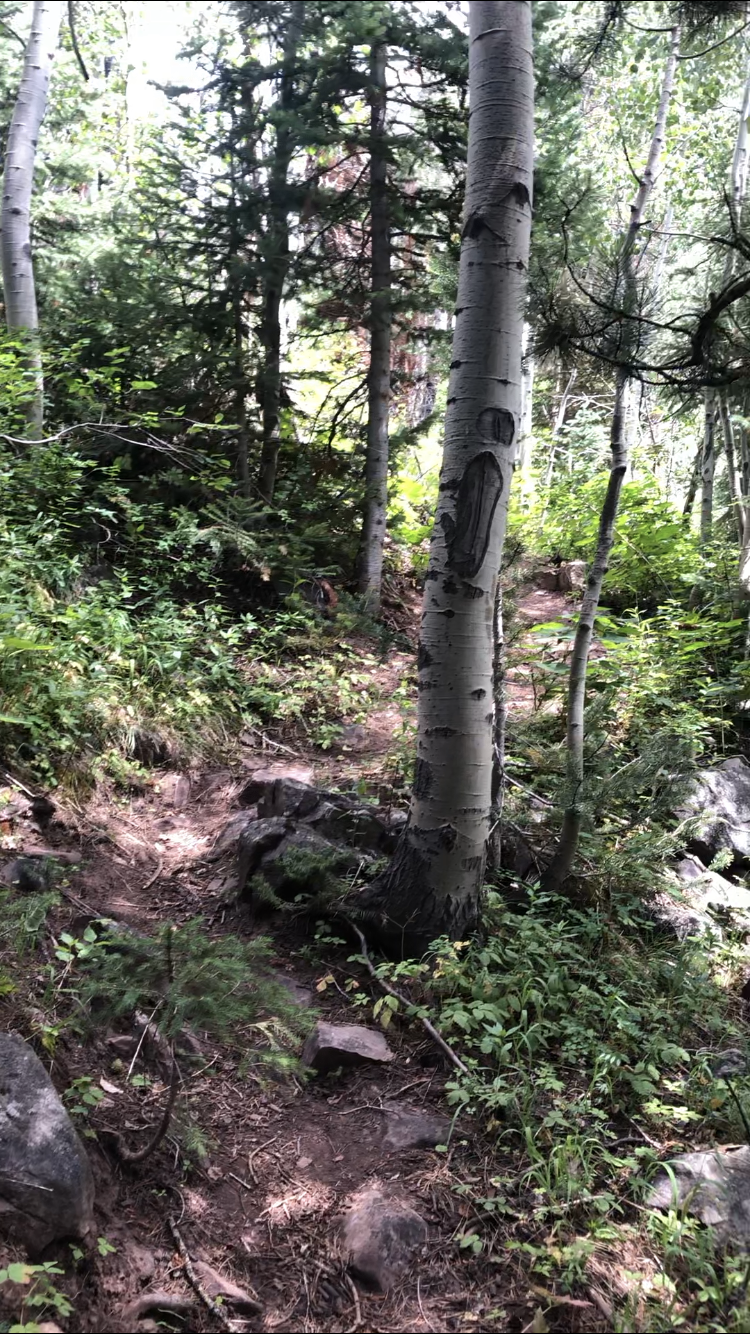 After missing the old split off the main trail and bushwhacking to the the creek fork, we crossed the creek (from south to north) and came upon what has to be the old pack trail. Like I mentioned before, the GPX track I made off the old trail map was not accurate - it said that we should have been on the south side of the creek for most of the canyon, but that was not the case. Unless this is a game trail that emerged post-Box Fire, but it seemed too wide at points (even with overgrowth) to be a game trail. Finding any type of trail was a sight for sore eyes as I thought whatever had been left of the Pack Trail surely was gone after the Box Fire. 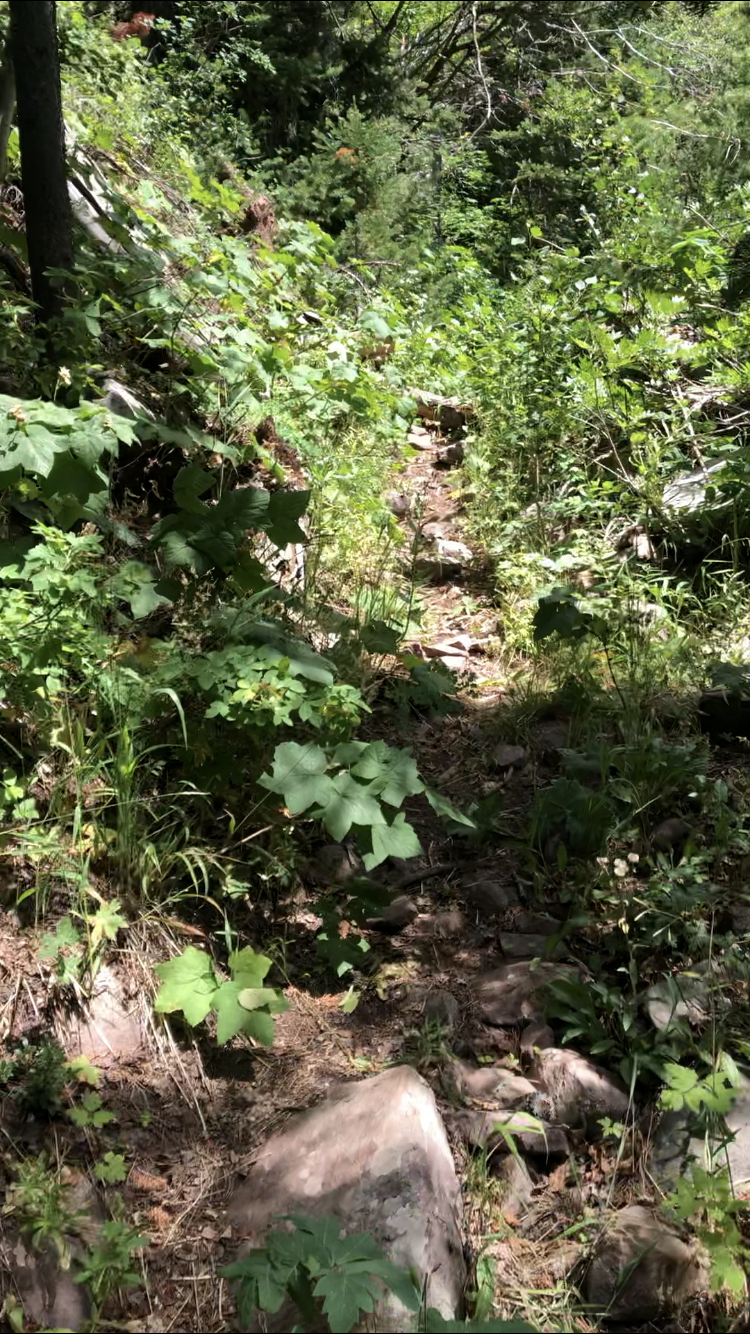 Faint and overgrown, but still a definitive trail. 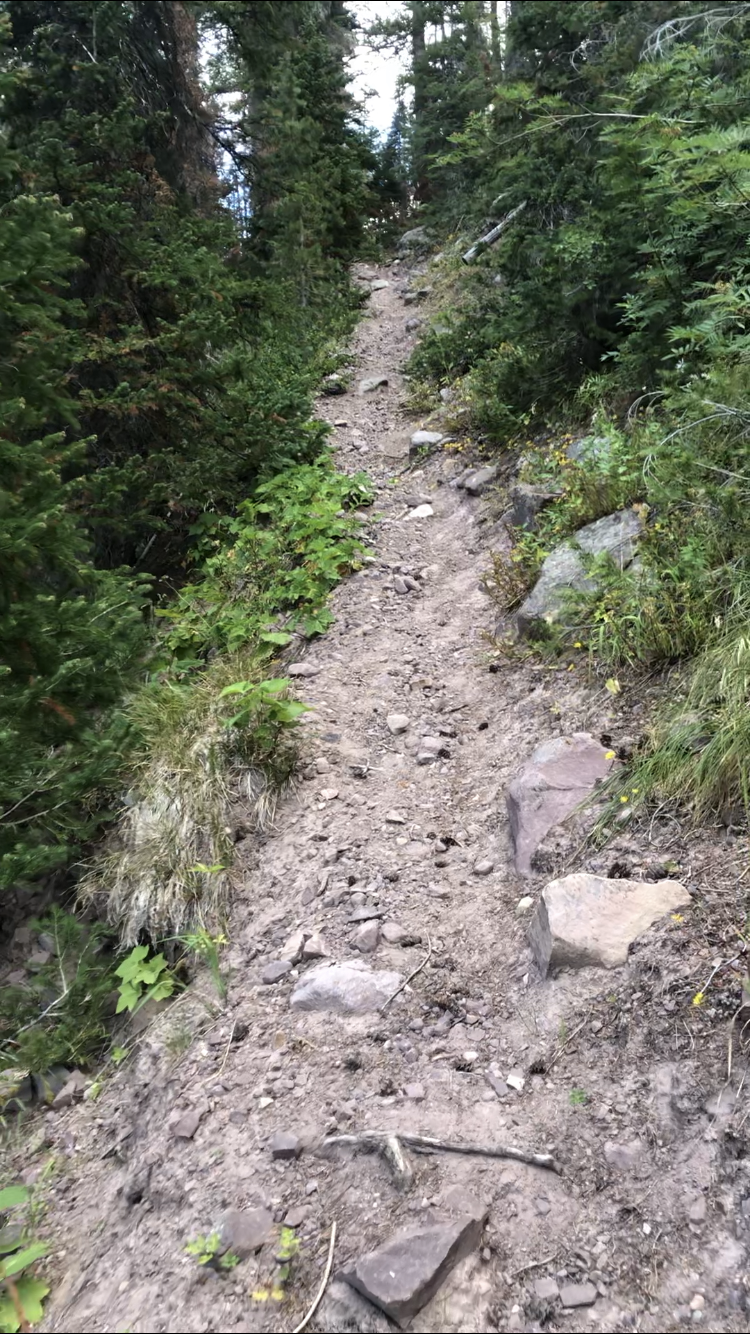 This was one section where we had crossed the river and were on the south side of it as the old pack trail map suggested and this was most definitely a trail. 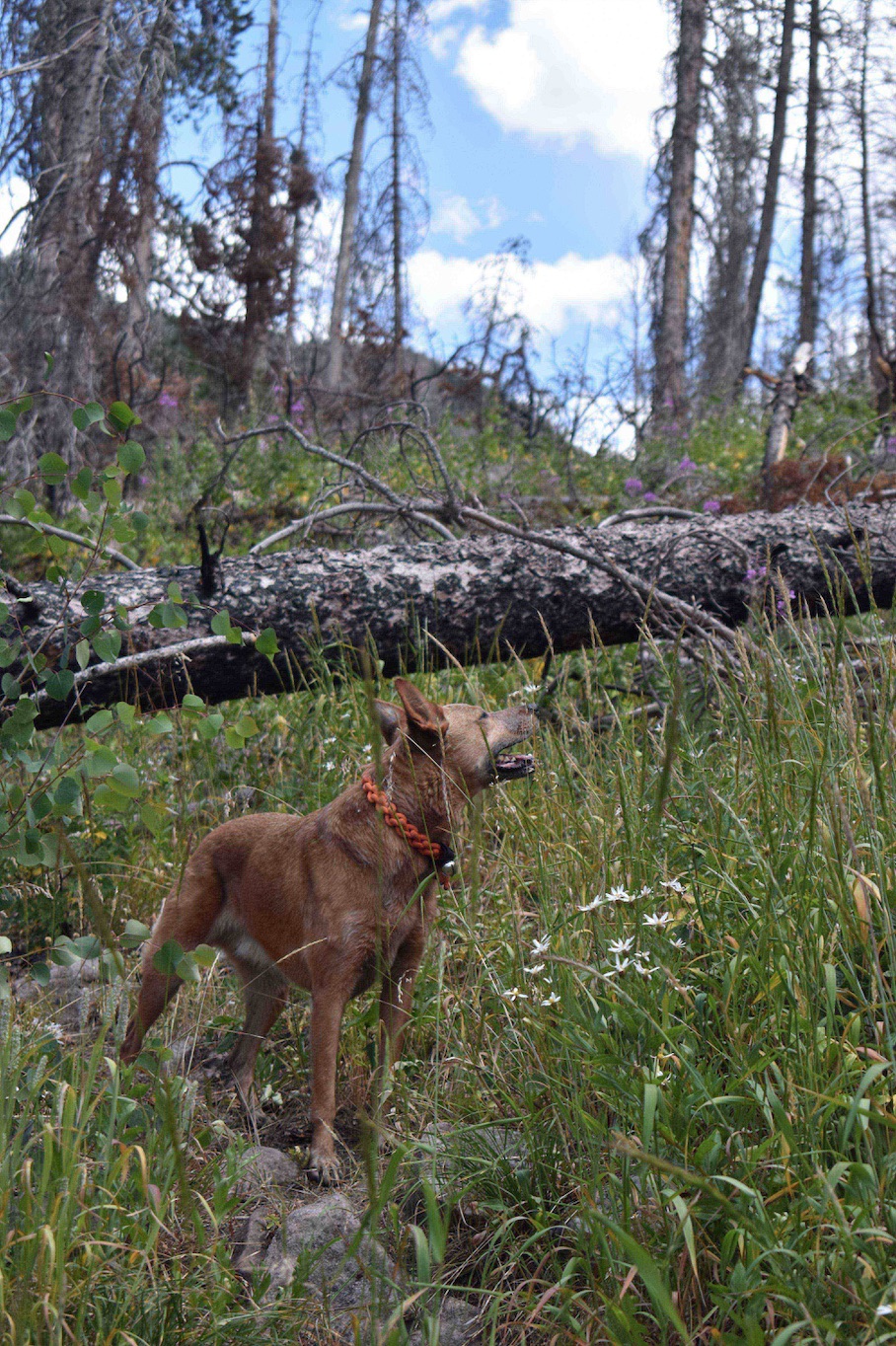 Getting further up the canyon where it opened up a bit, still on the "trail." Redford's looking to the southwest in the direction which we would eventually say goodbye to what trail there was and venture off-trail to find the small unnamed lake in the southwest side of the basin. 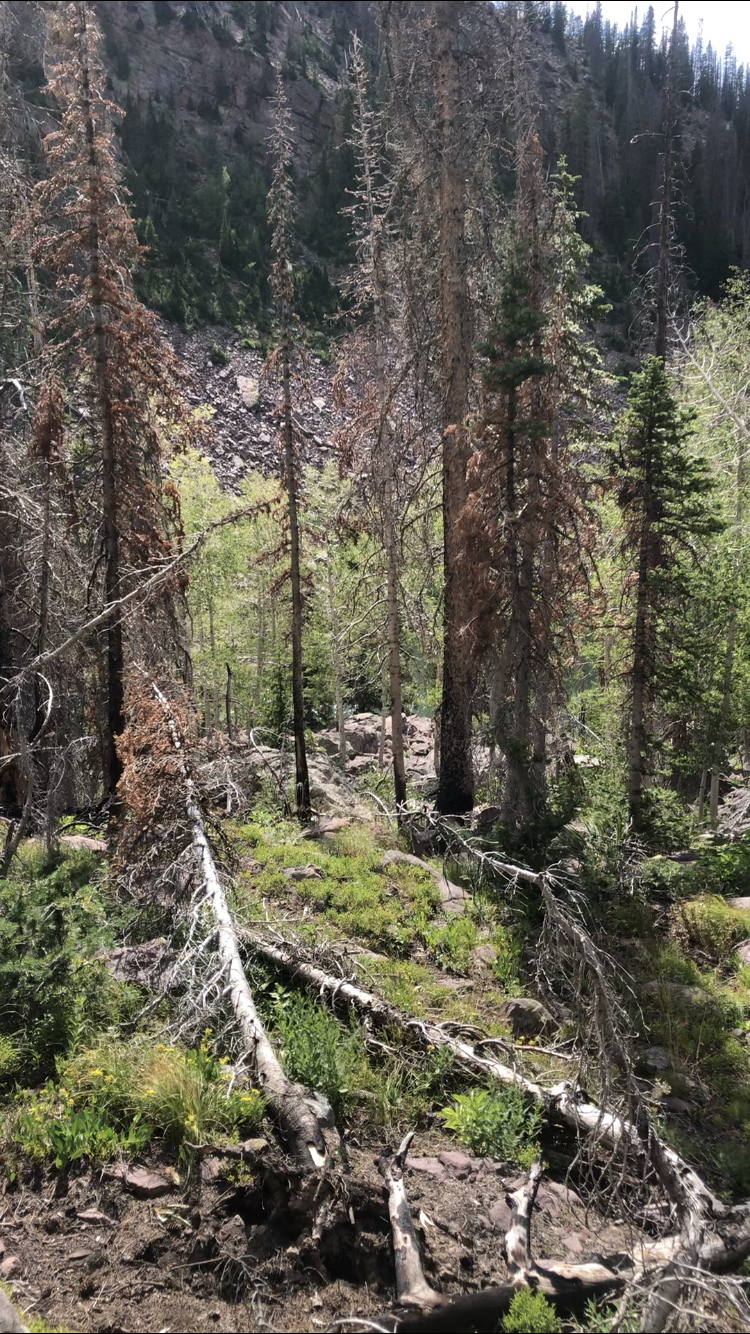 We decided to go straight up the hills south instead of following the canyon up a bit more and following a contour to the unnamed lake. It was steep and there was still quite a bit of fire damage, but I did successfully navigate us to this lake and it was a beautiful sight. 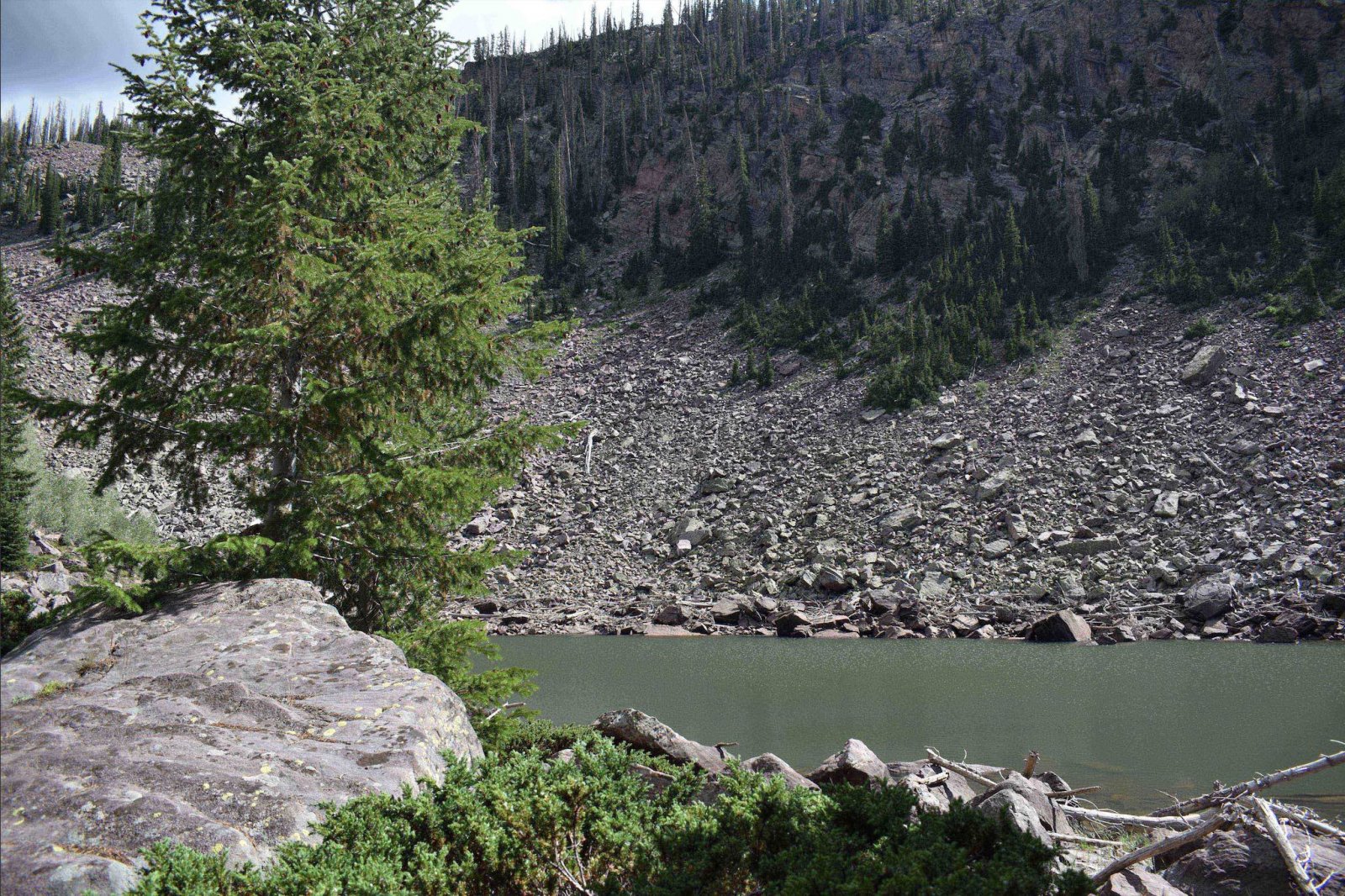 Looking south. This lake had fish (I wouldn't know what kind) and seemed to have a kind of blue-green algae in it. We didn't let Redford swim in it (as he would have loved to) because there have been cases of a type of blue-green algae that kills dogs if they ingest it. Better safe than sorry. 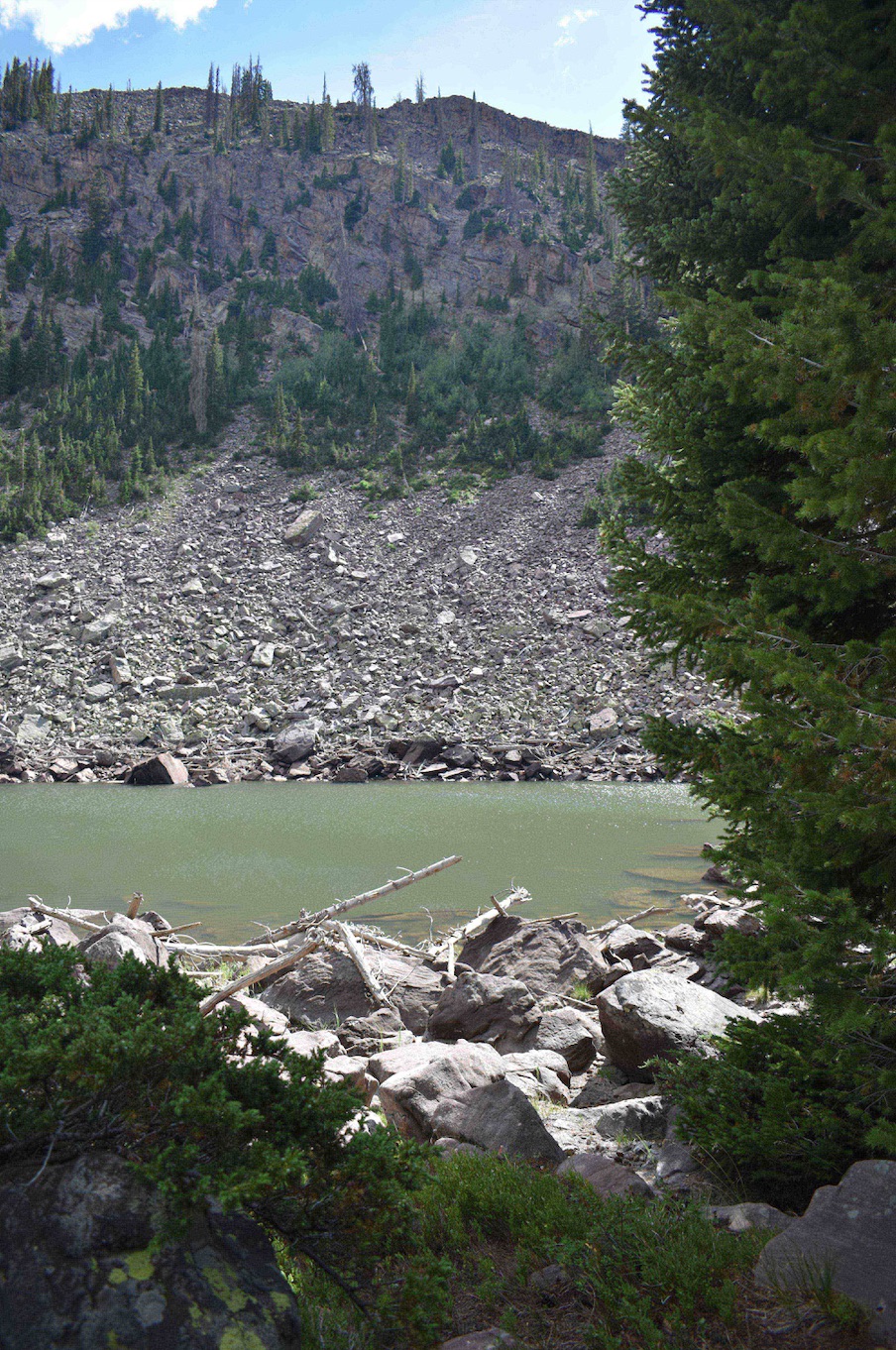 Once over the hills it was easy to spot the rocky cliff face and scree field where after studying the maps and aerial imagery I knew the lake would be. 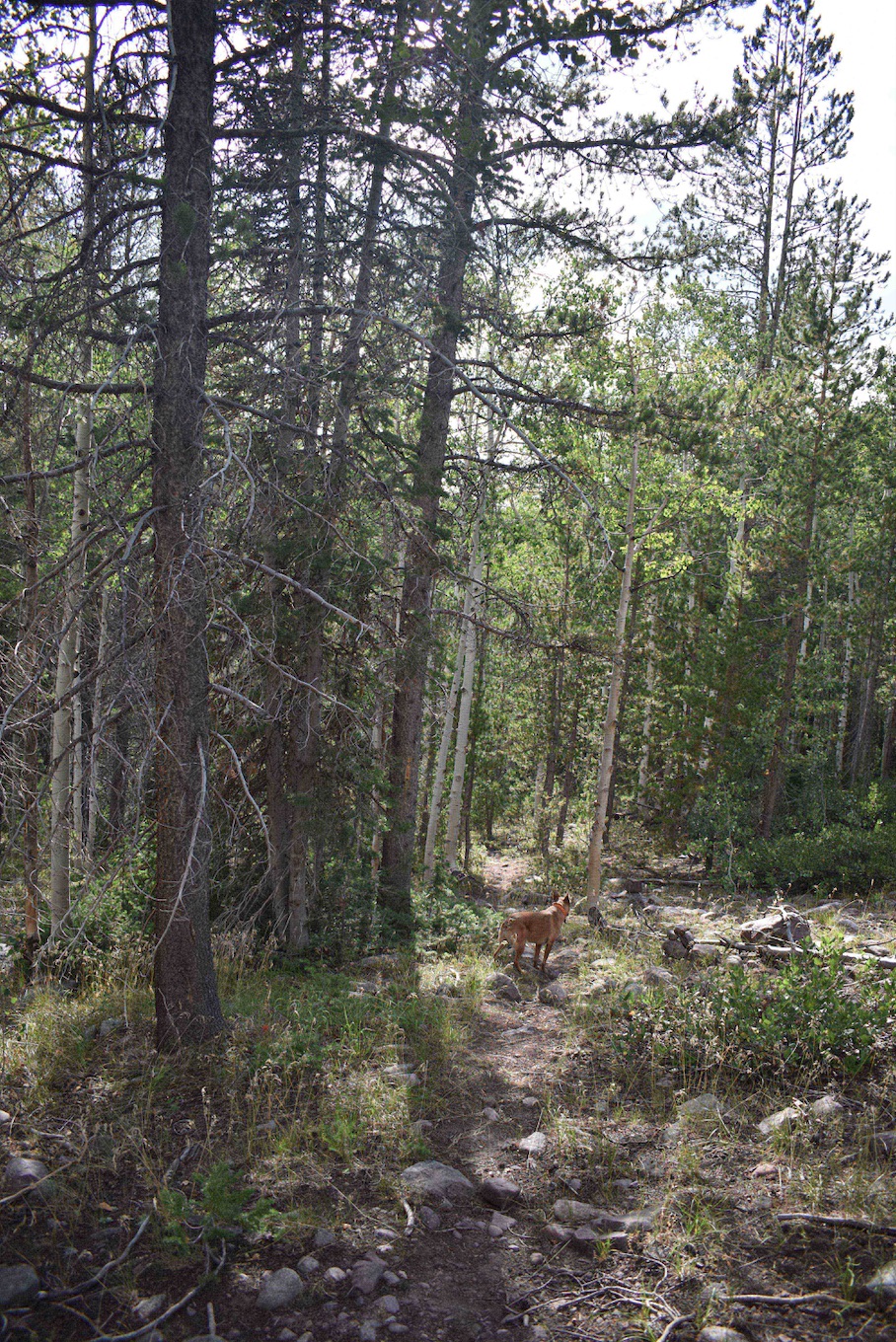 Heading back down. There was a very nice section of aspens on the north side of the creek. Again, here's a very distinguishable trail, but on the wrong side of the creek according to the old pack trail map. 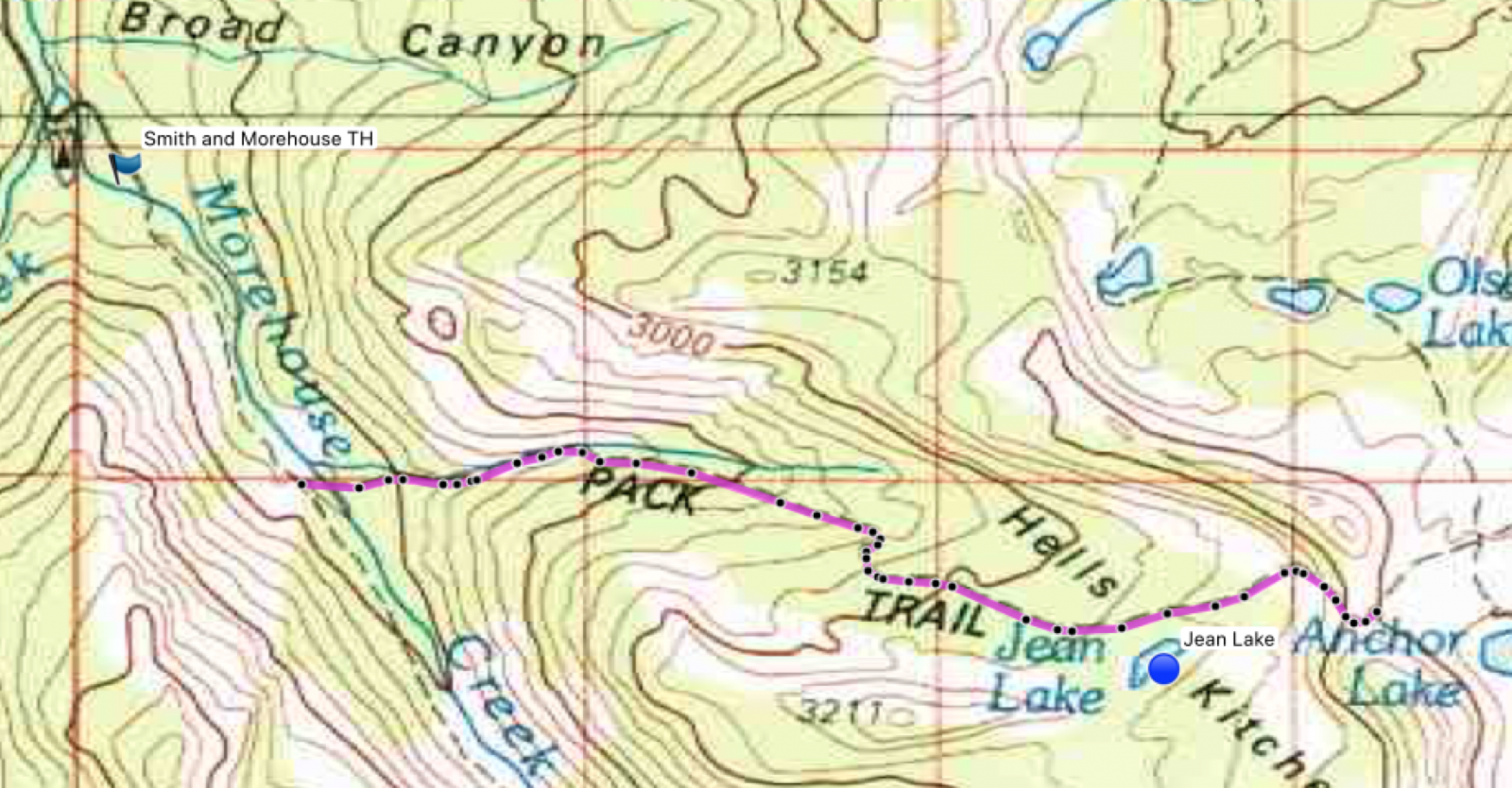 The GPX track I made over the old pack trail. 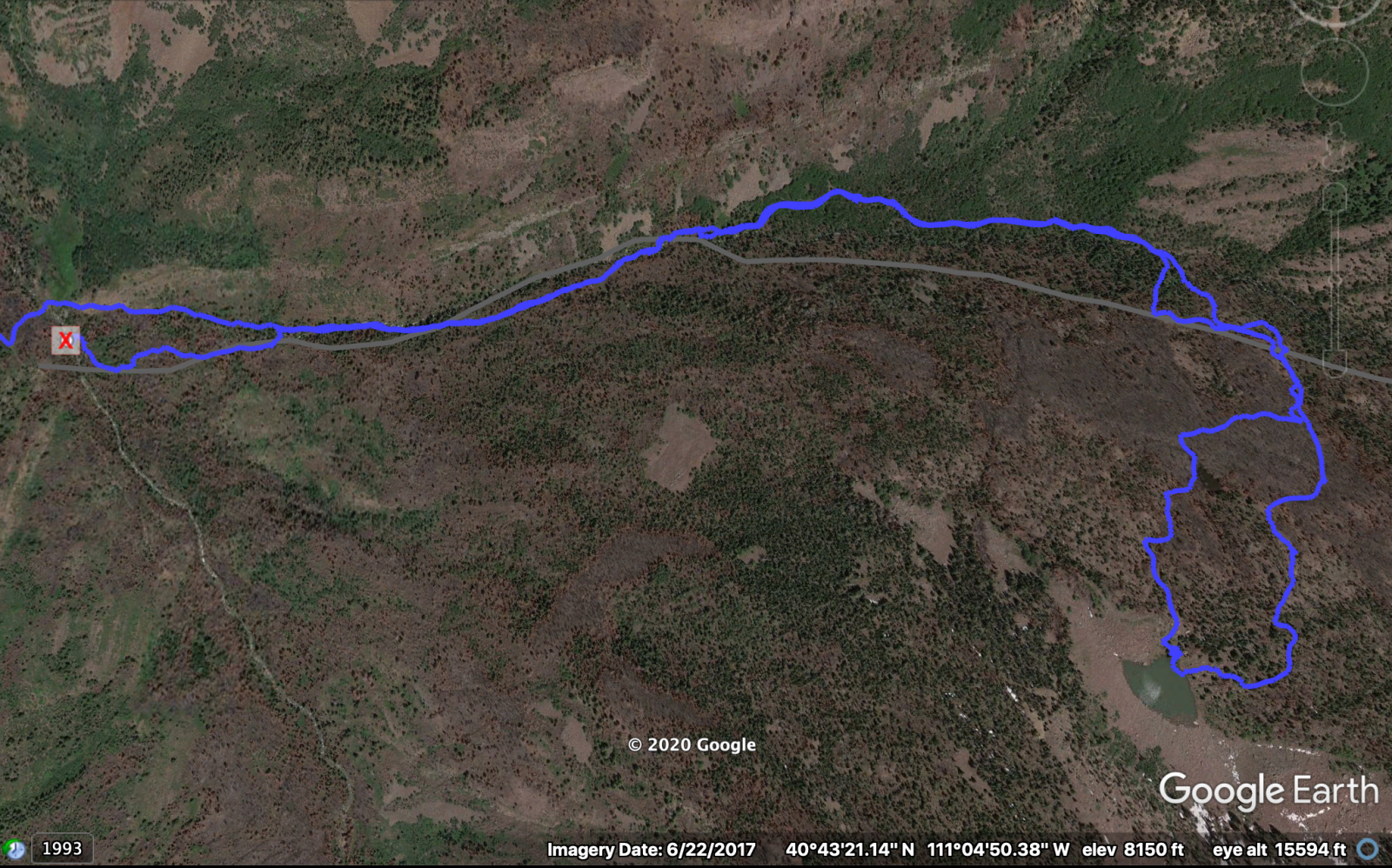 Above you can see the GPX track of the old pack trail in Grey. Im blue is the path we actually took. I know GPS devices can be inaccurate - and the often are - but some of this seemed a little too inaccurate. Especially considering we were on a pretty discernible trail. I doubt a trail like that would have emerged after the fire, seems like it was there before.

If you have been up there since the fire I would love to hear your experience with the trail. Also, if you'd like the the GPX track of the trail or of the way we went let me know. Just know that the way we went after leaving the trail to get up to the lake was steep and not efficient (see the right side of the "loop" to the lake). The way we went down was better (the left side of the "loop" leaving the lake), but it would be better to continue up the canyon to the 9600' contour and take that to the lake and approach it from the east, not south.

Thanks to @scatman for piquing my interest in this basin and this old trail. We didn't see anyone on the pack trail the entire day, only people on the Smith and Morehouse Trail. Hoping to get back up there and head further to Jean Lake.

I love exploring abandoned trails. Feels like discovering a bit of history. Thanks for sharing.

Ahh..... brings back memories @Cait. Thanks for sharing your adventure. I found the exact same thing, that the trail on the map was not accurate, and east of Jean Lake didn't seem to exist anymore at all, or if it still does, I couldn't find it.
M

A little over a year after @Cait went in, I hiked into Jean Lake on October 5th using her route for the first portion. Shown below in yellow is my track starting from the Smith & Morehouse trail, about a mile up from the trailhead. My tracks overlaid her route perfectly up to where she turned off (the red dot on the map). I continued on following a fairly discernible trail. Where the trail was not visible I was able to follow the old trail via old tree blazes and small cairns scattered about. 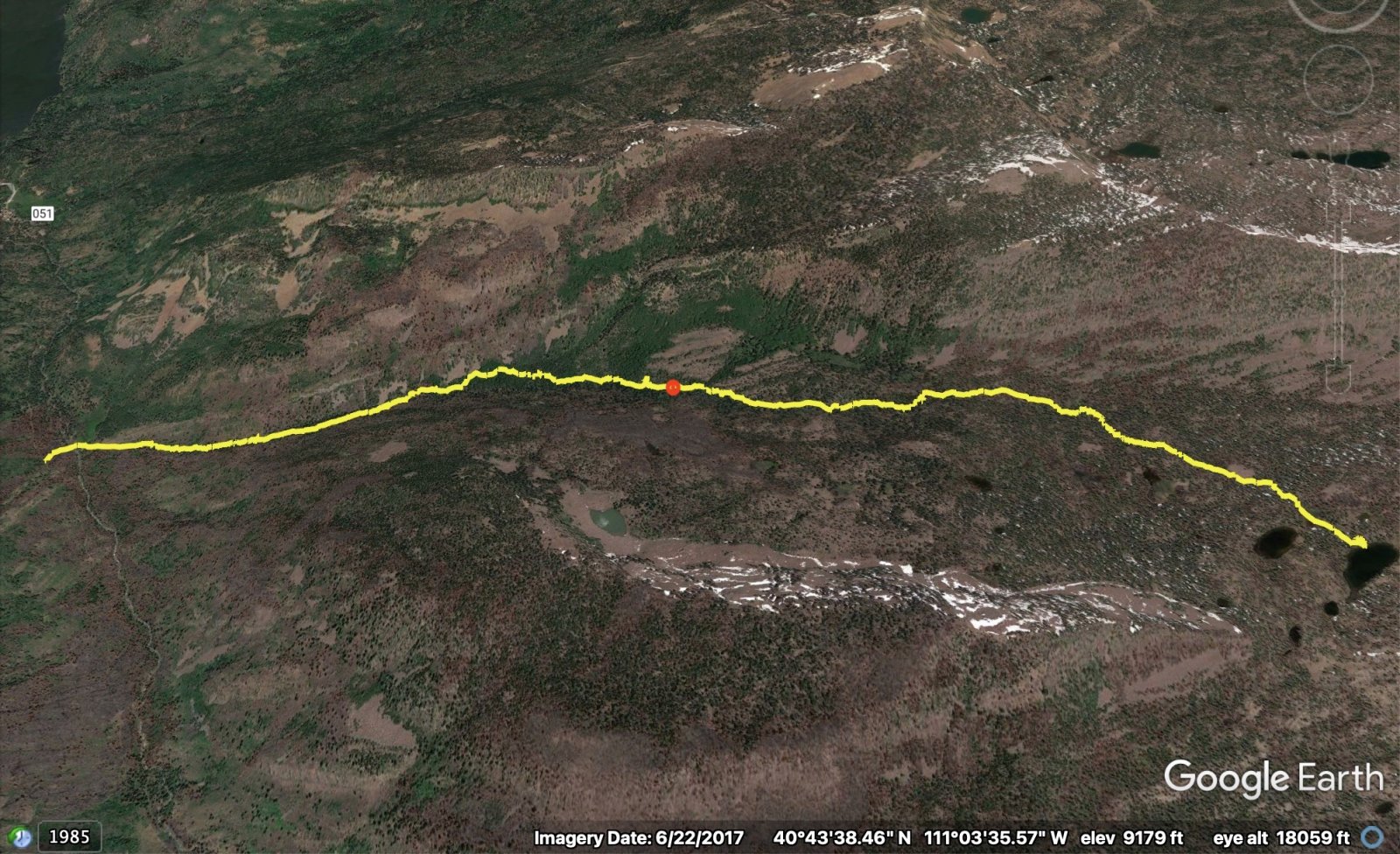 Thanks to @Cait for the route beginnings and all the photos. They all helped a lot!
You must log in or register to reply here.
Similar threads