In a month of great camping, hiking and biking, thanks to dry and hot weather in southern Alberta, a highpoint was last week's day hike to the Headwall Lakes in Kananaskis Country west of Calgary. After a dusty gravel road drive and an easy walk on xc ski and snowshoe trails, a winding forest trail took us into the Headwall Creek valley. 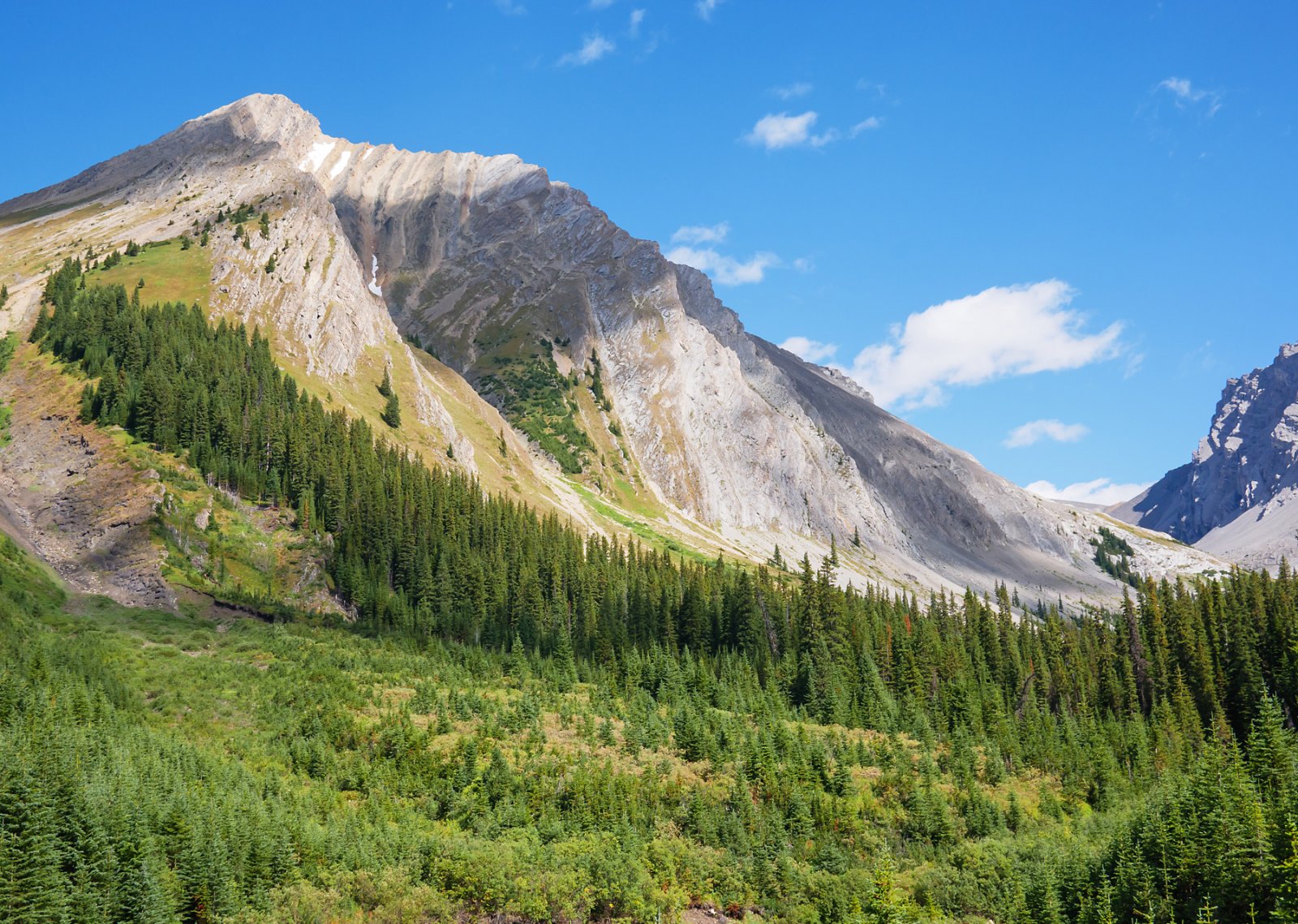 Views opening up in avalanche paths falling off Mount Chester, with our destination around the corner of the low ridge up-valley. 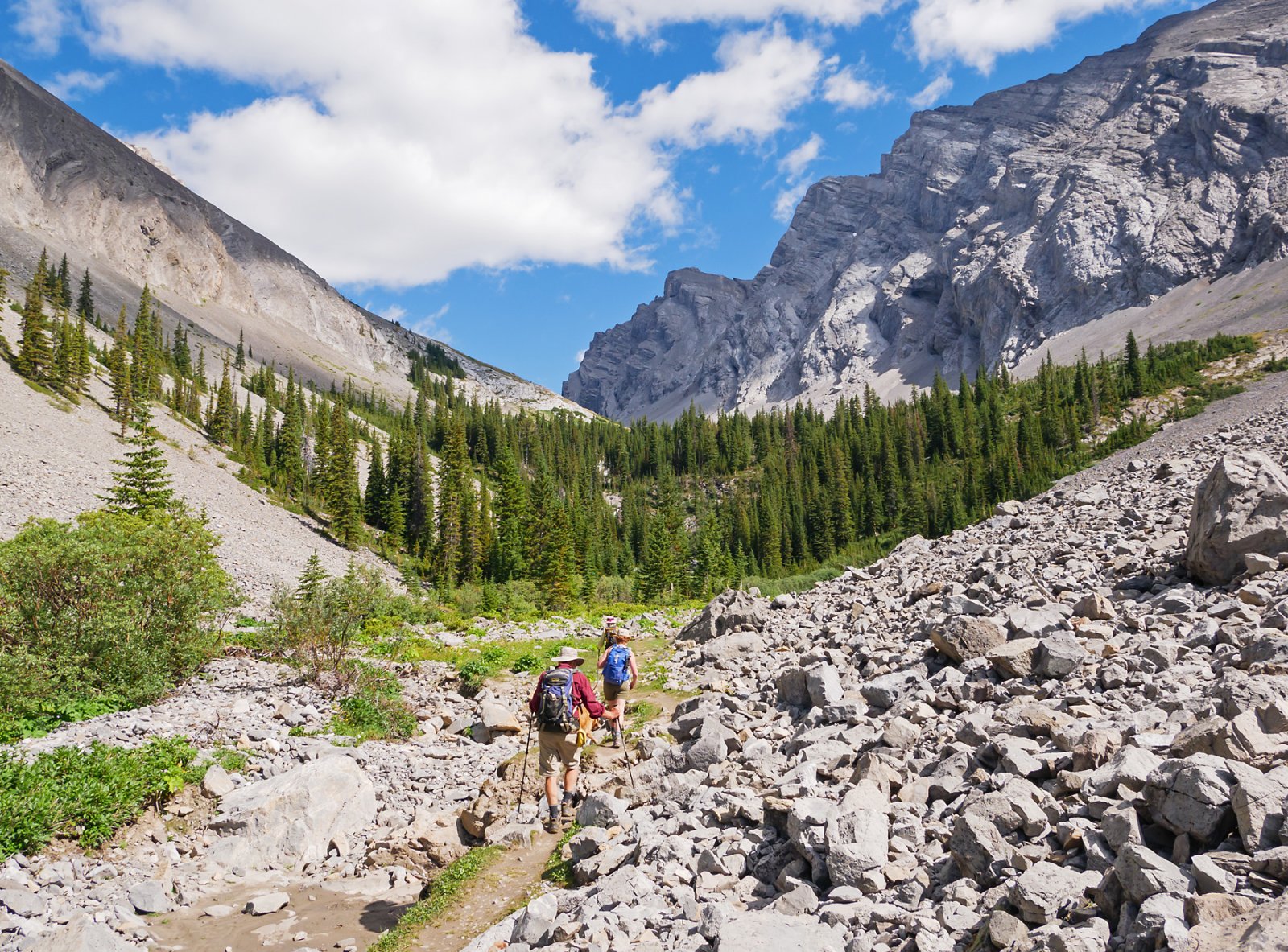 Next- a steep but fairly short grunt up a "goat trail" in the trees and slide path at right. 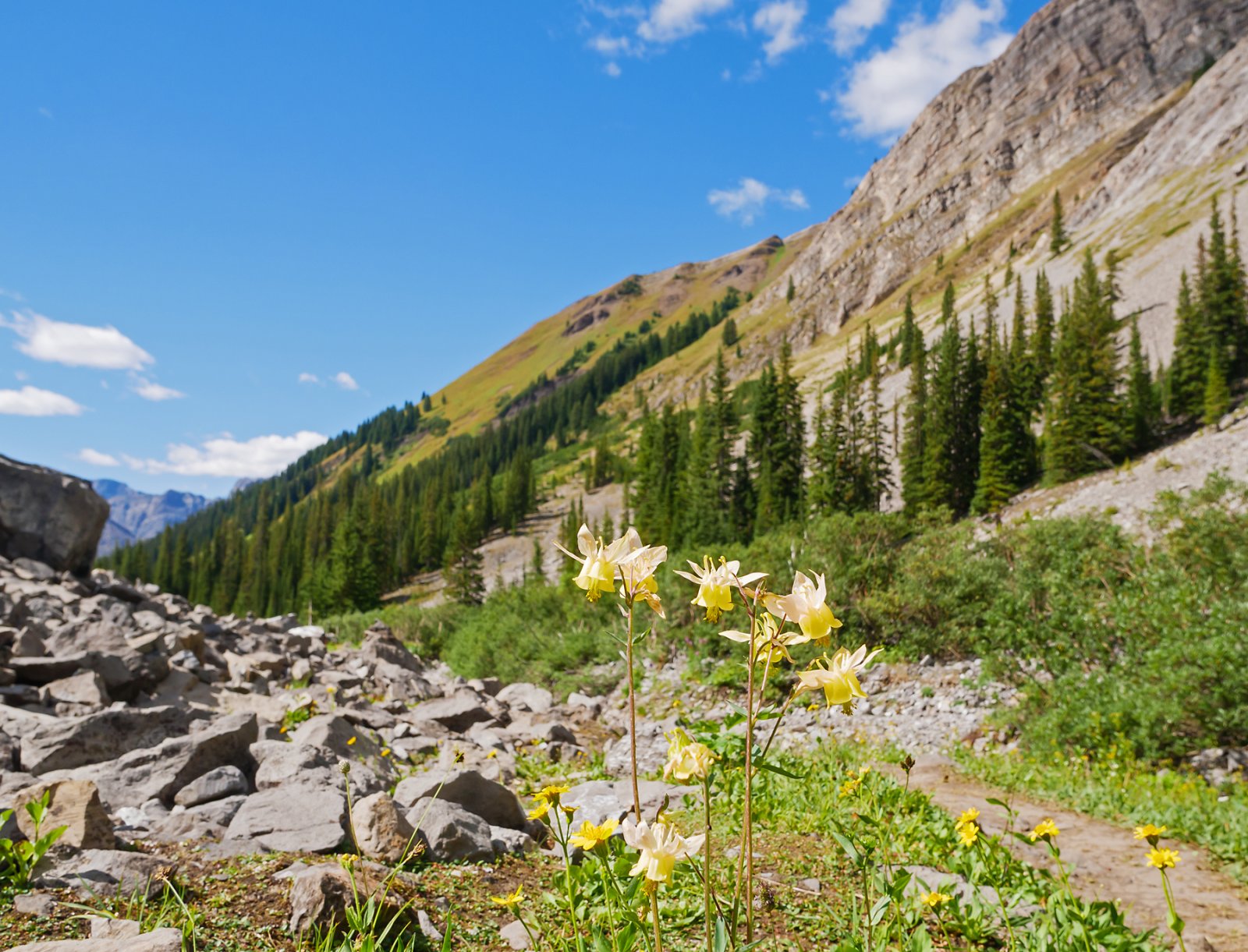 These Columbine were a surprise, after all the hot weather that has brought flower season to an end in many places. 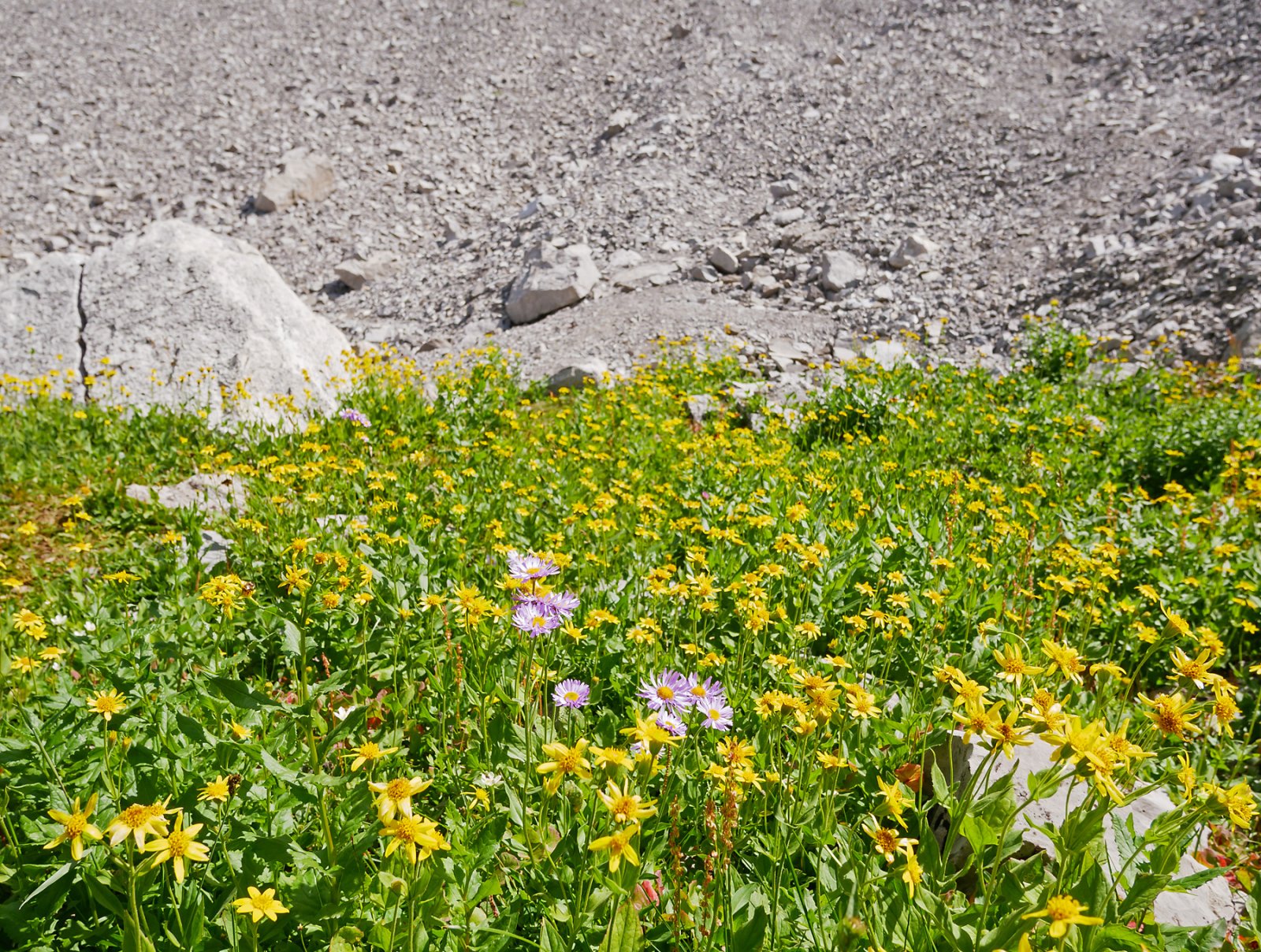 Well watered pocket meadows on benches along the headwall ascent were still crammed with arnica- here with fleabane as a centrepiece. 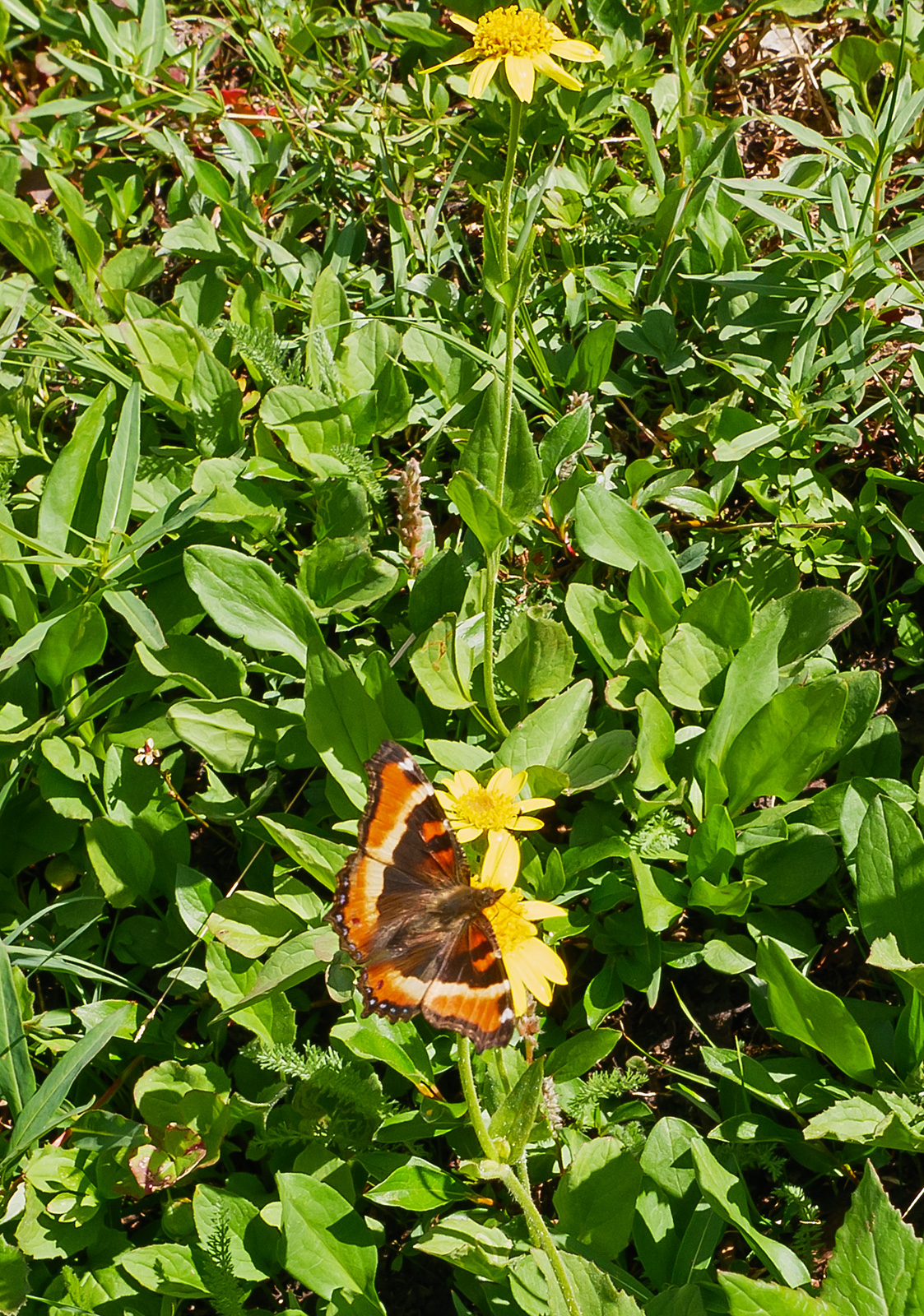 Swarms of fast moving, hard to capture butterflies and bees were taking full advantage of the late summer bounty. Thankfully- the mosquitos are done, and horseflies nearly absent. 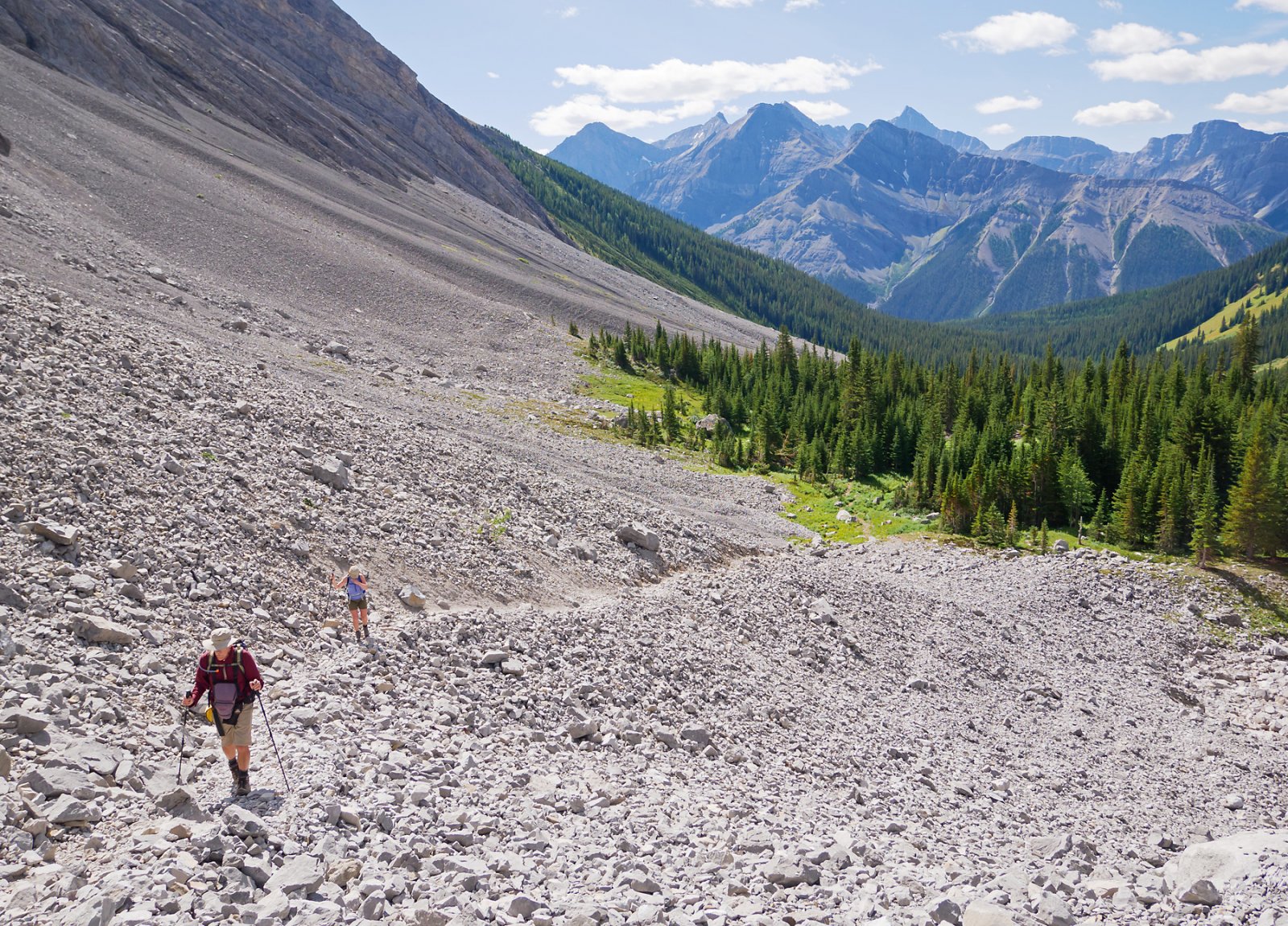 One final stretch of talus to go before the first lake, on this unofficial trail/route. 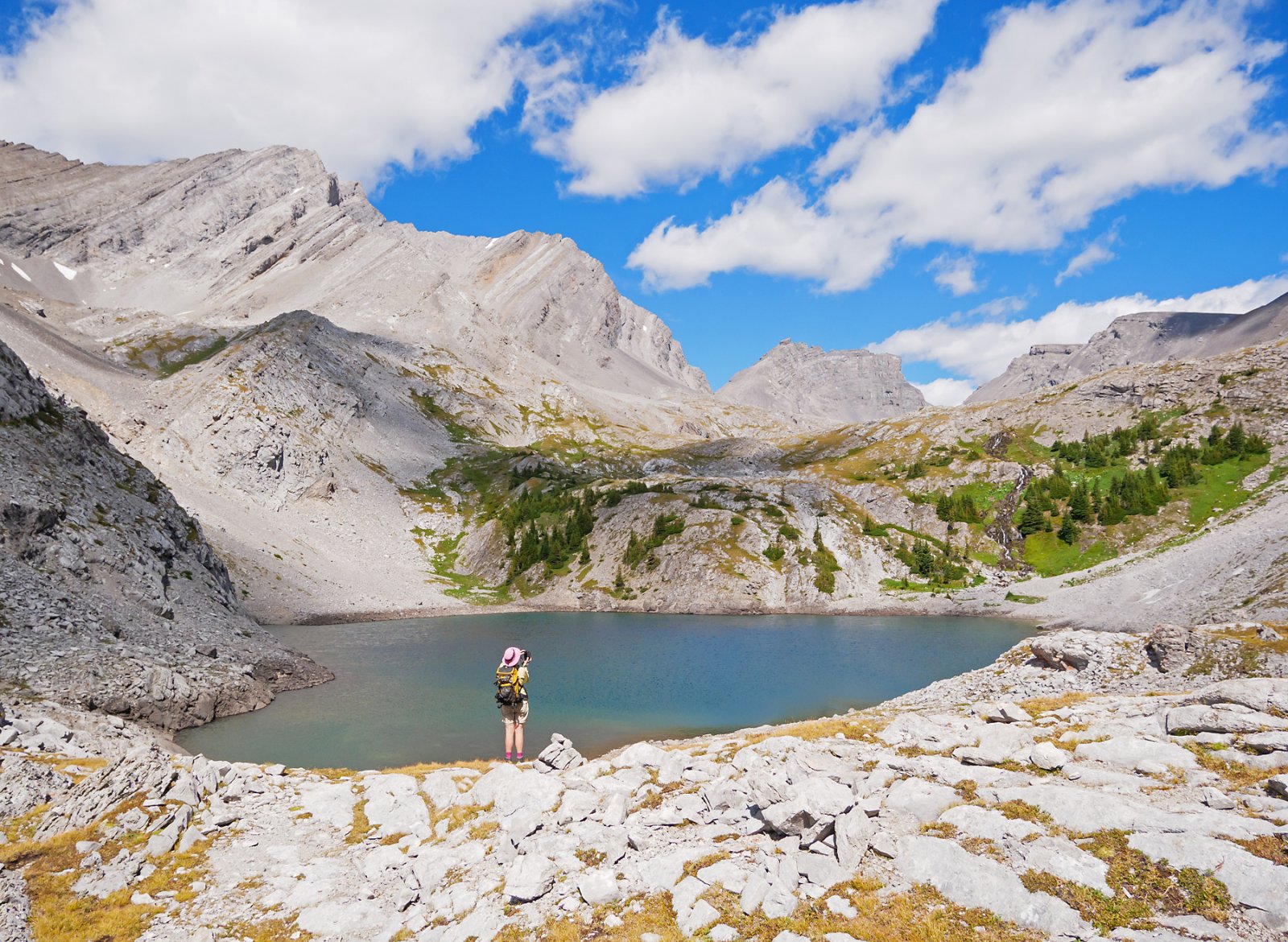 Lower Headwall Lake, set in a saucer of rock. After a late lunch (more like afternoon tea!) we are going up the headwall between the two lakes, in the vicinity of the cascades at the far end that emanate from a spring draining the upper lake. 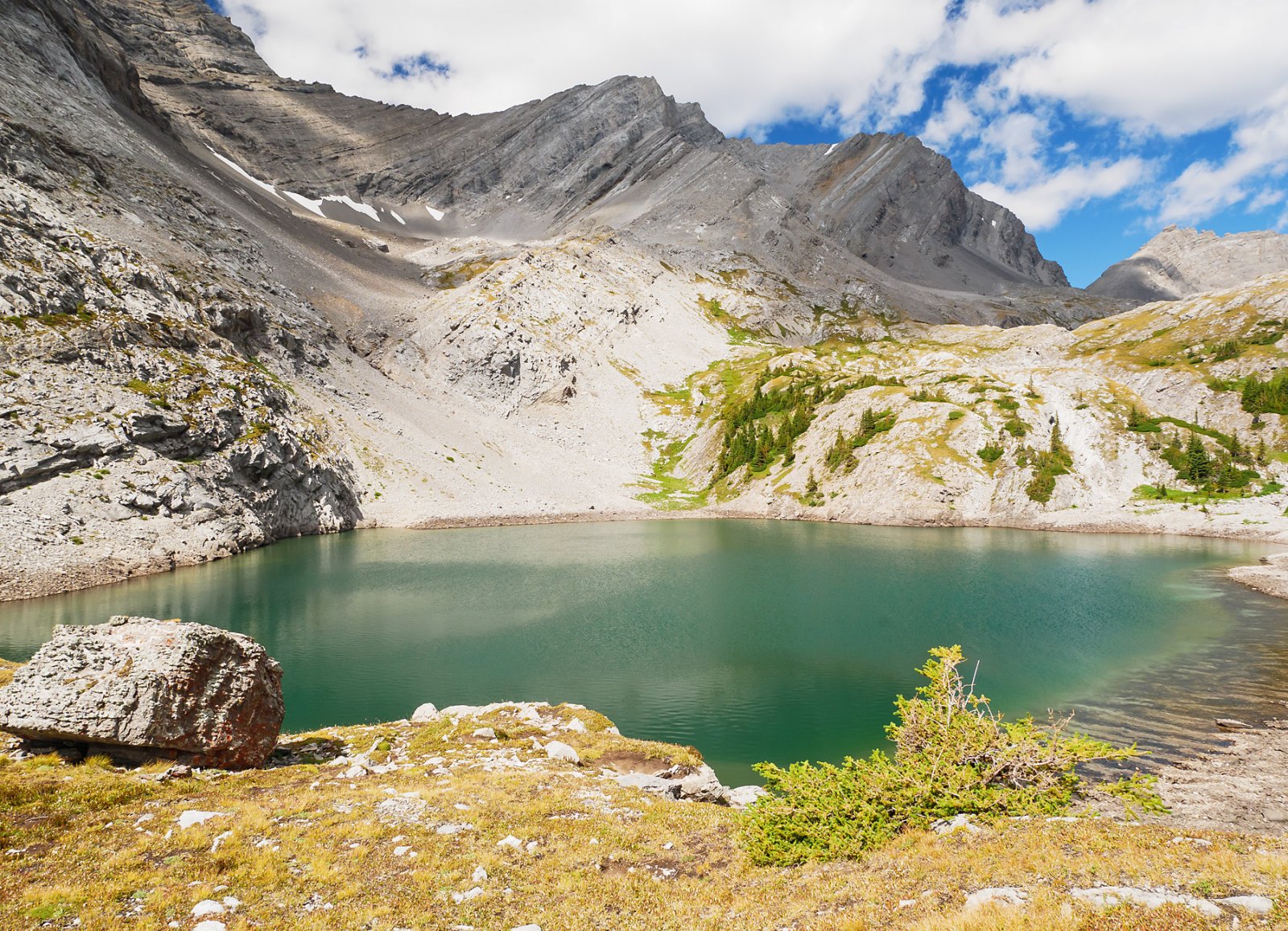 Not a bad spot to refuel! 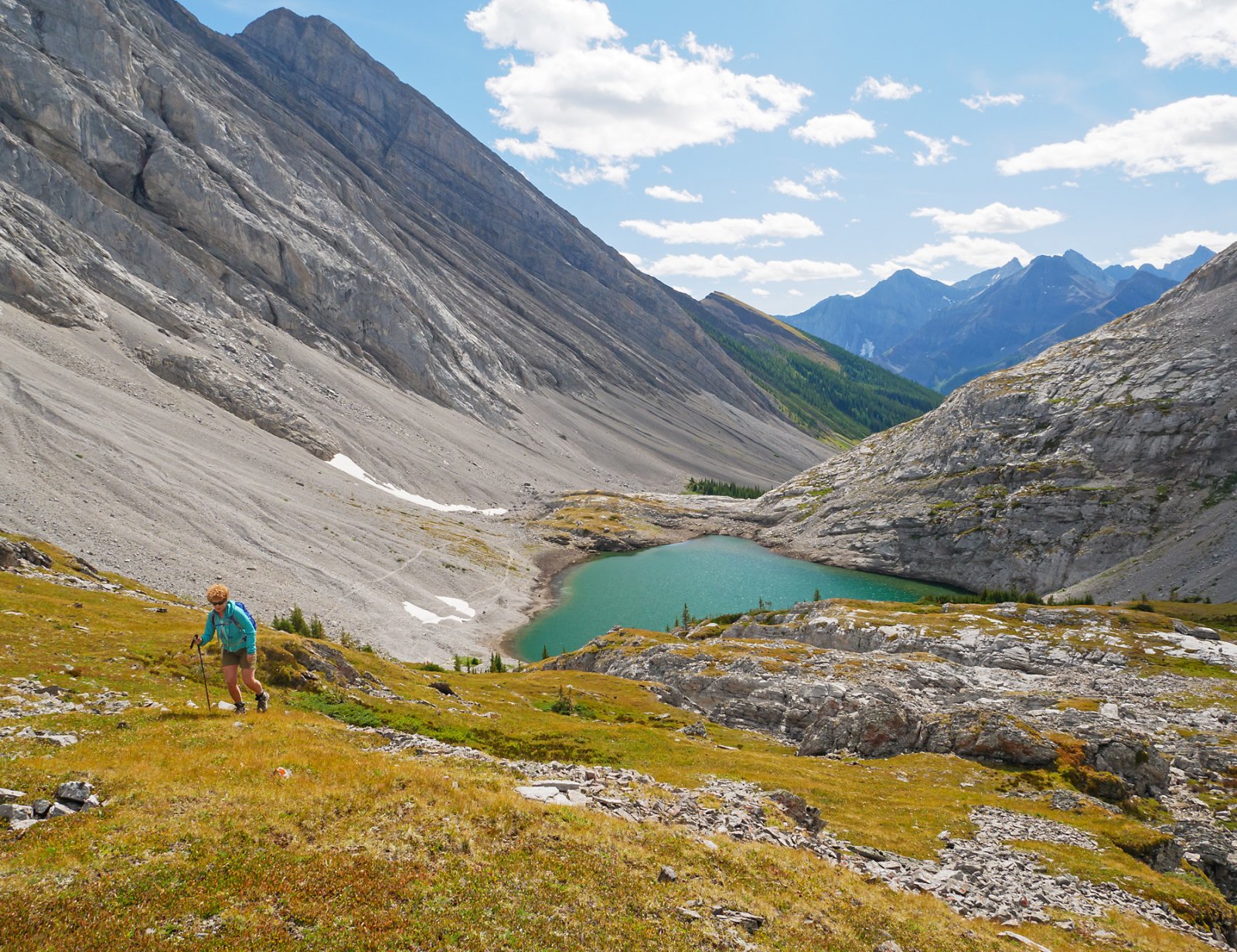 On the way to upper Headwall Lake after lunch. 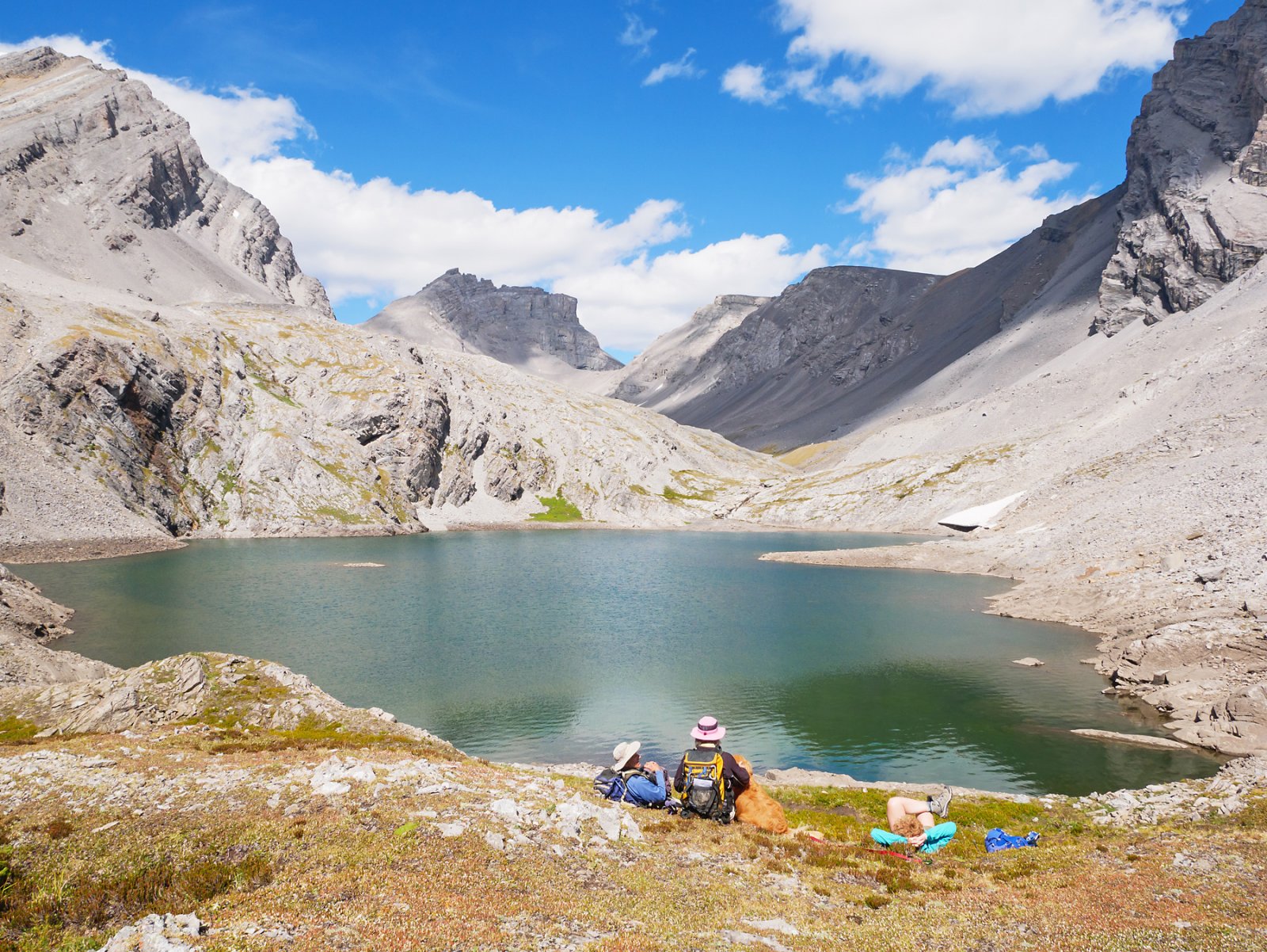 Although it hasn't been that long since our first break, an afternoon siesta is called for. By this time we have the place to ourselves, thanks to a tardy start to the day, and only 7 other hikers in the area who are on their way out by now. 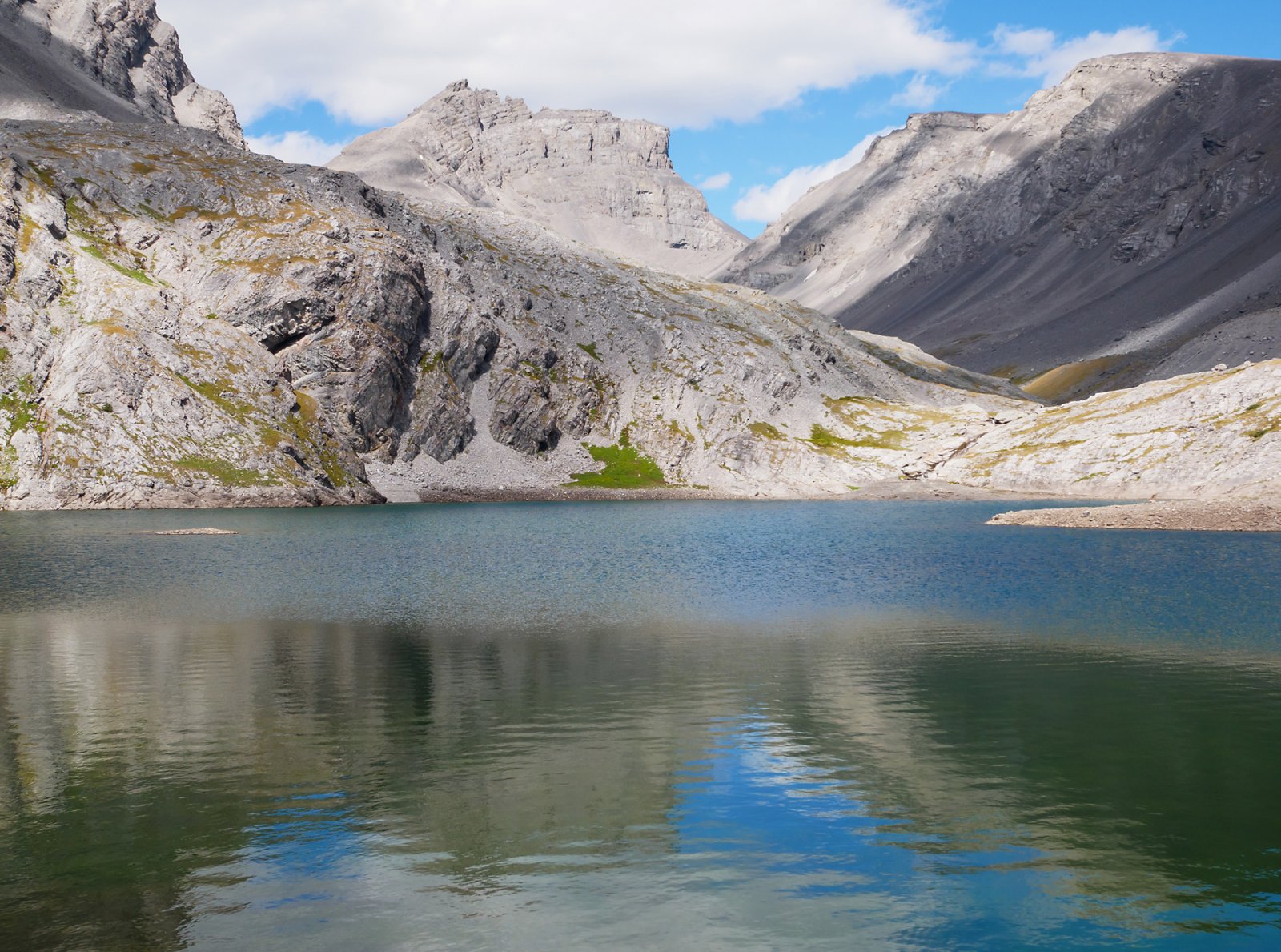 The Fortress at valley head, looking much less imposing from here, compared to it's commanding presence that earns it the name as seen from the opposite aspect. It's an easy walk up from this side. Not today though- it's already late afternoon and there is a lot of clambering over blocky terrain to get to the scree slopes leading up to the summit block, which is circumvented by an out-of-sight break in the cliffs. 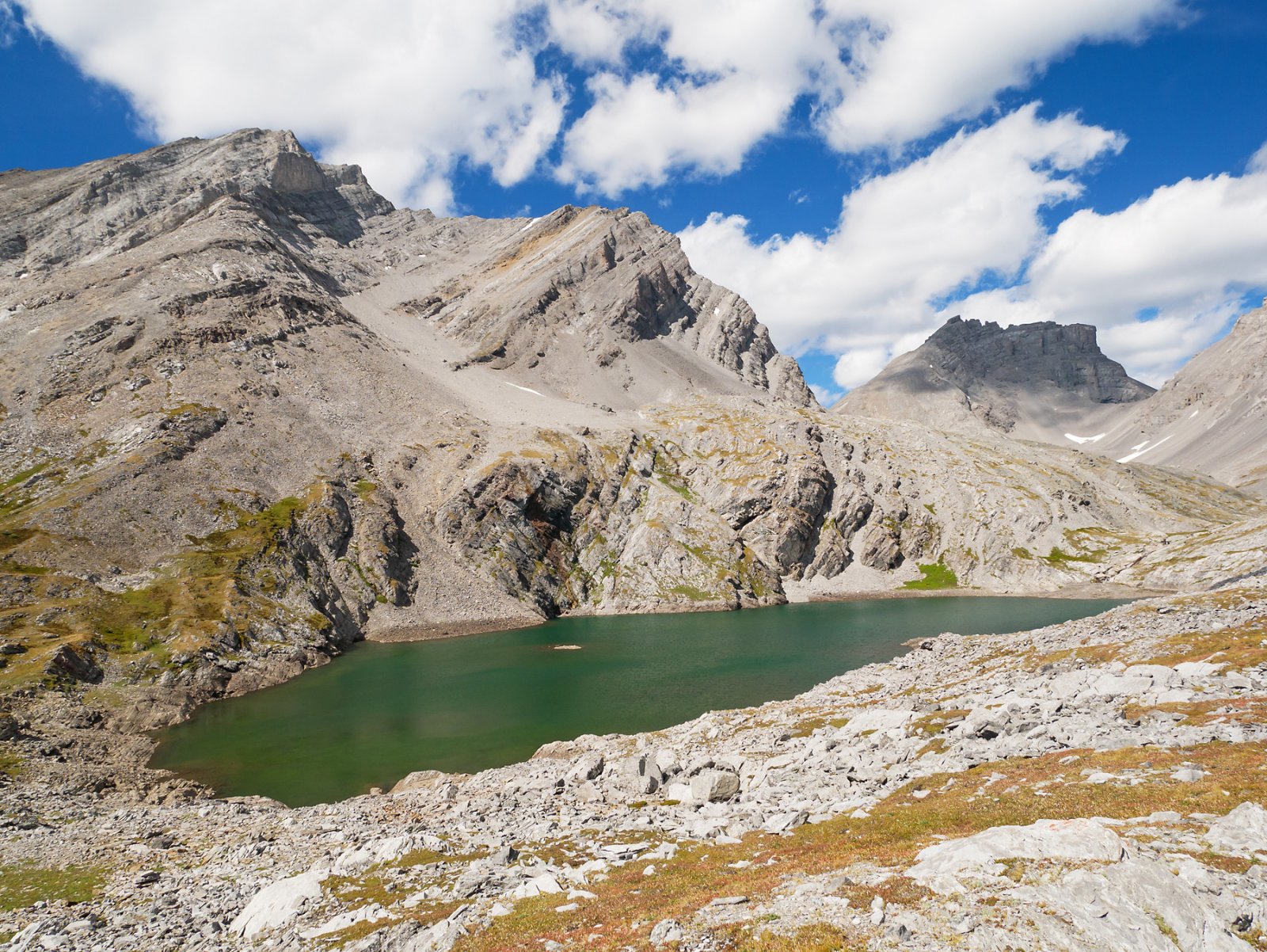 An austere yet beautiful setting. The snow fed waterfall that typically tumbles down the cliffs opposite into the lake, has dried up in the August heat. 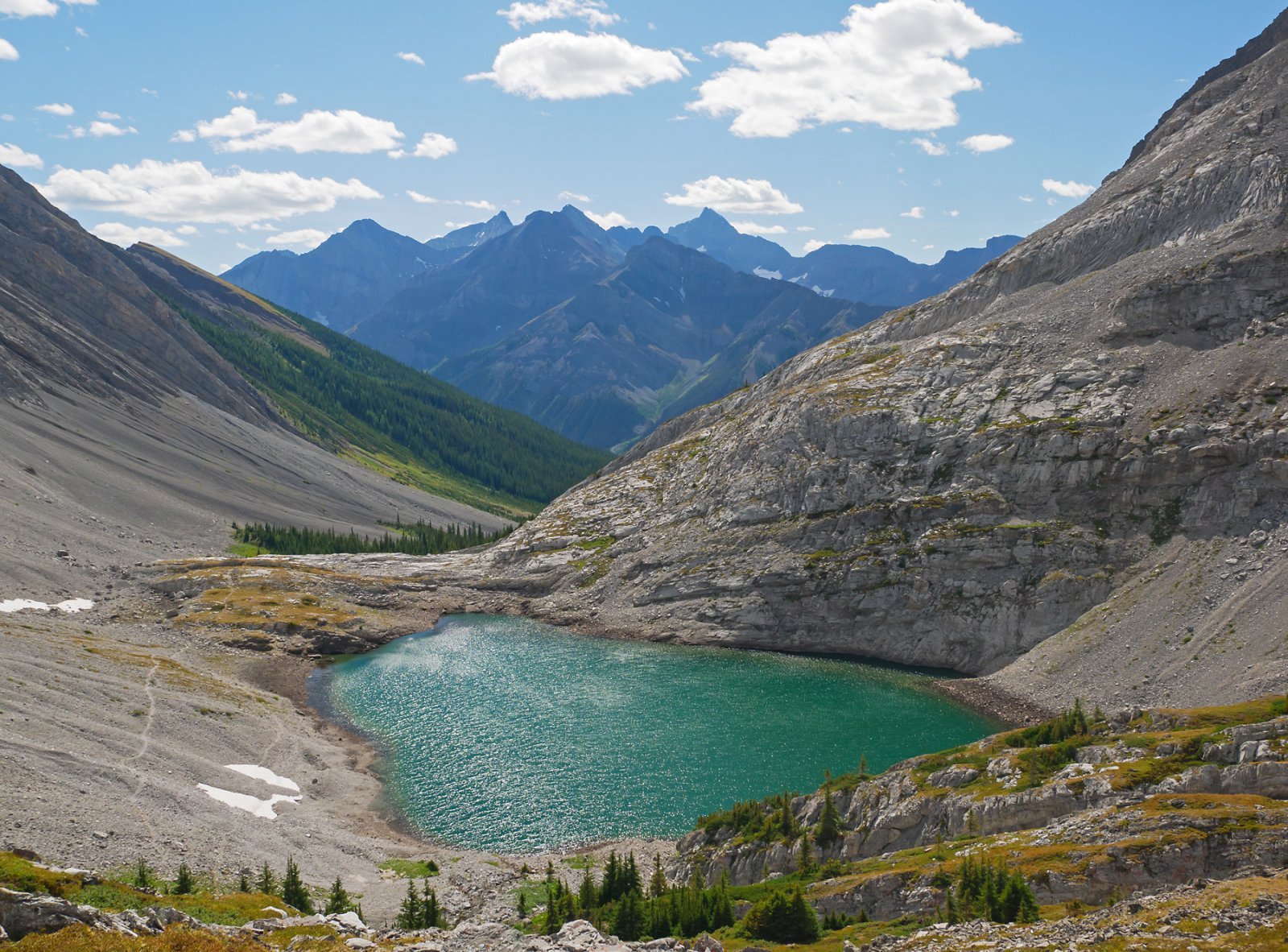 While the others nap, Piper the dog and I wander around with the camera. 150 m below- Lower Headwall Lake sparkles in the breeze. 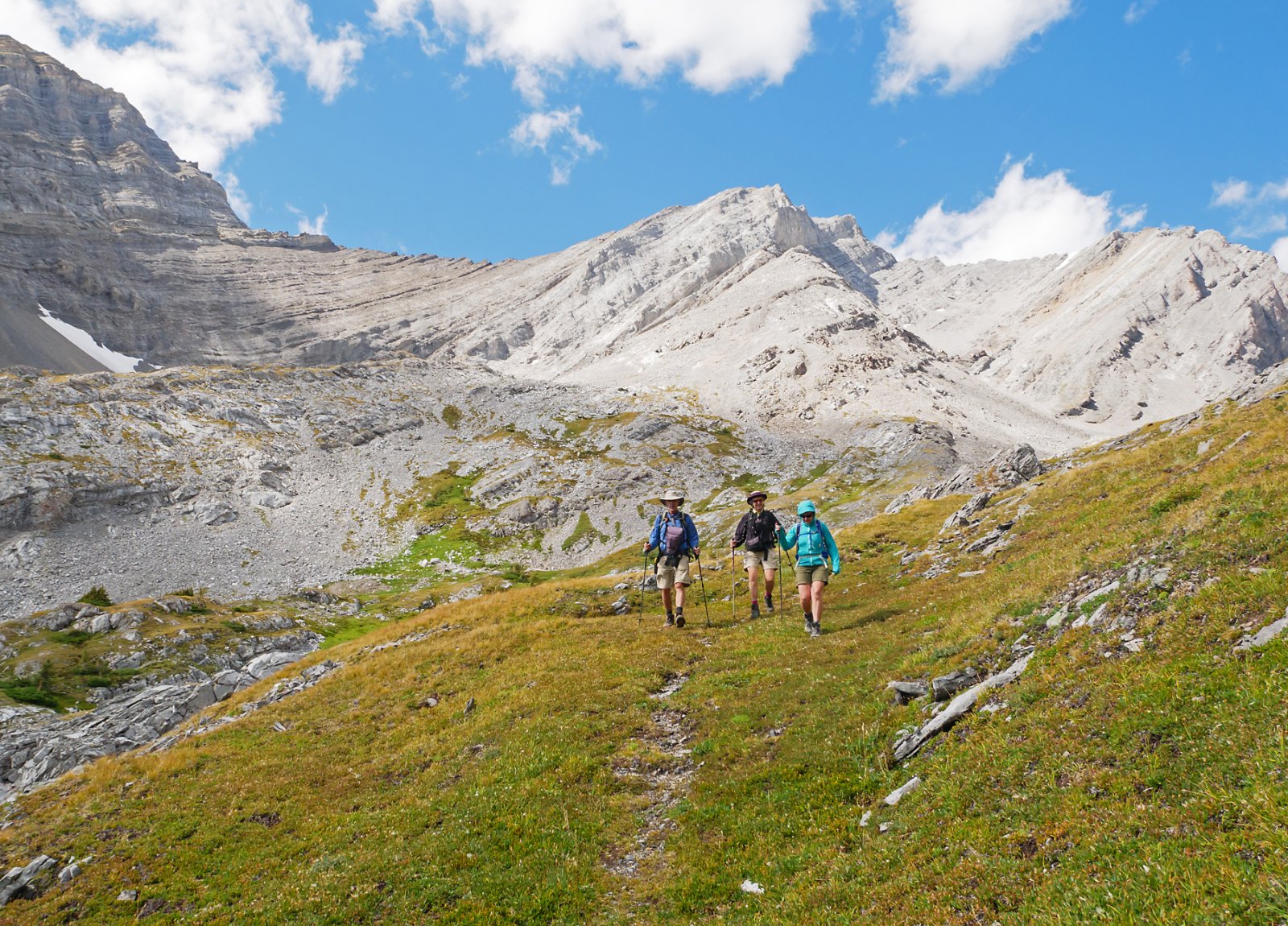 Time to get moving! A ramp of tundra leads easily down between lakes. 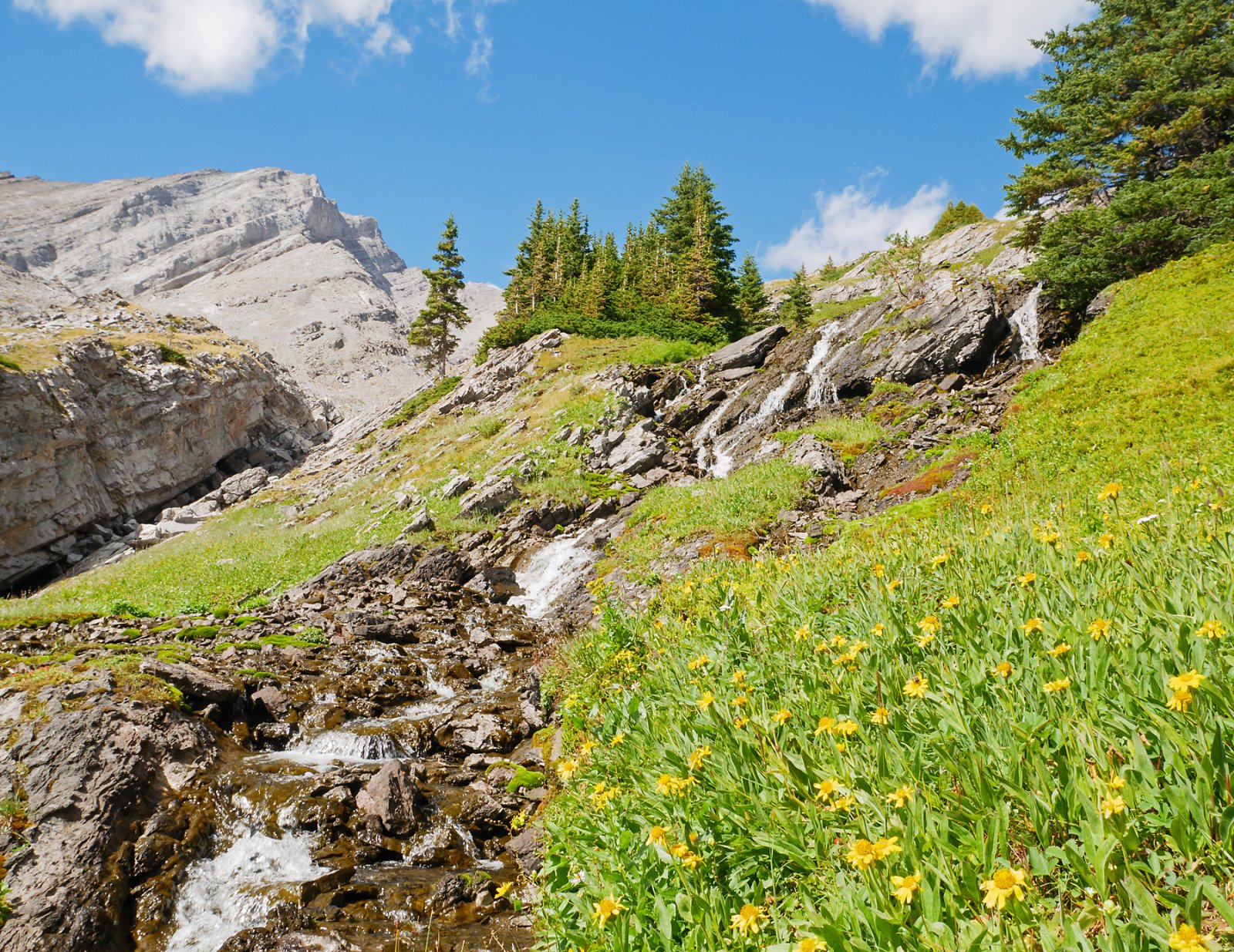 Up close to the cascades springing from the rocks above. 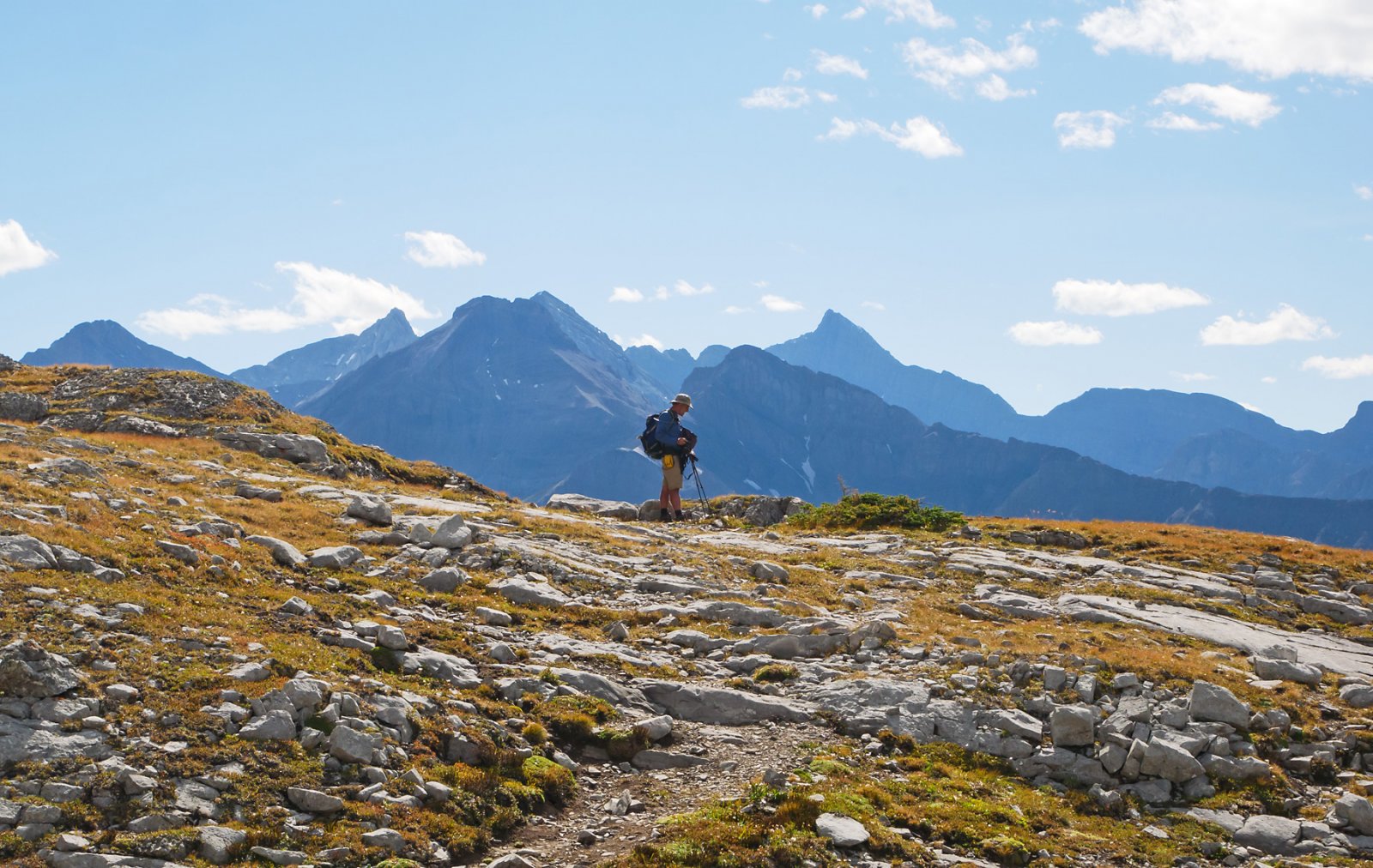 From the ridge cradling the lower lake- views west to skyline peaks on the glaciated divide between Alberta and BC. 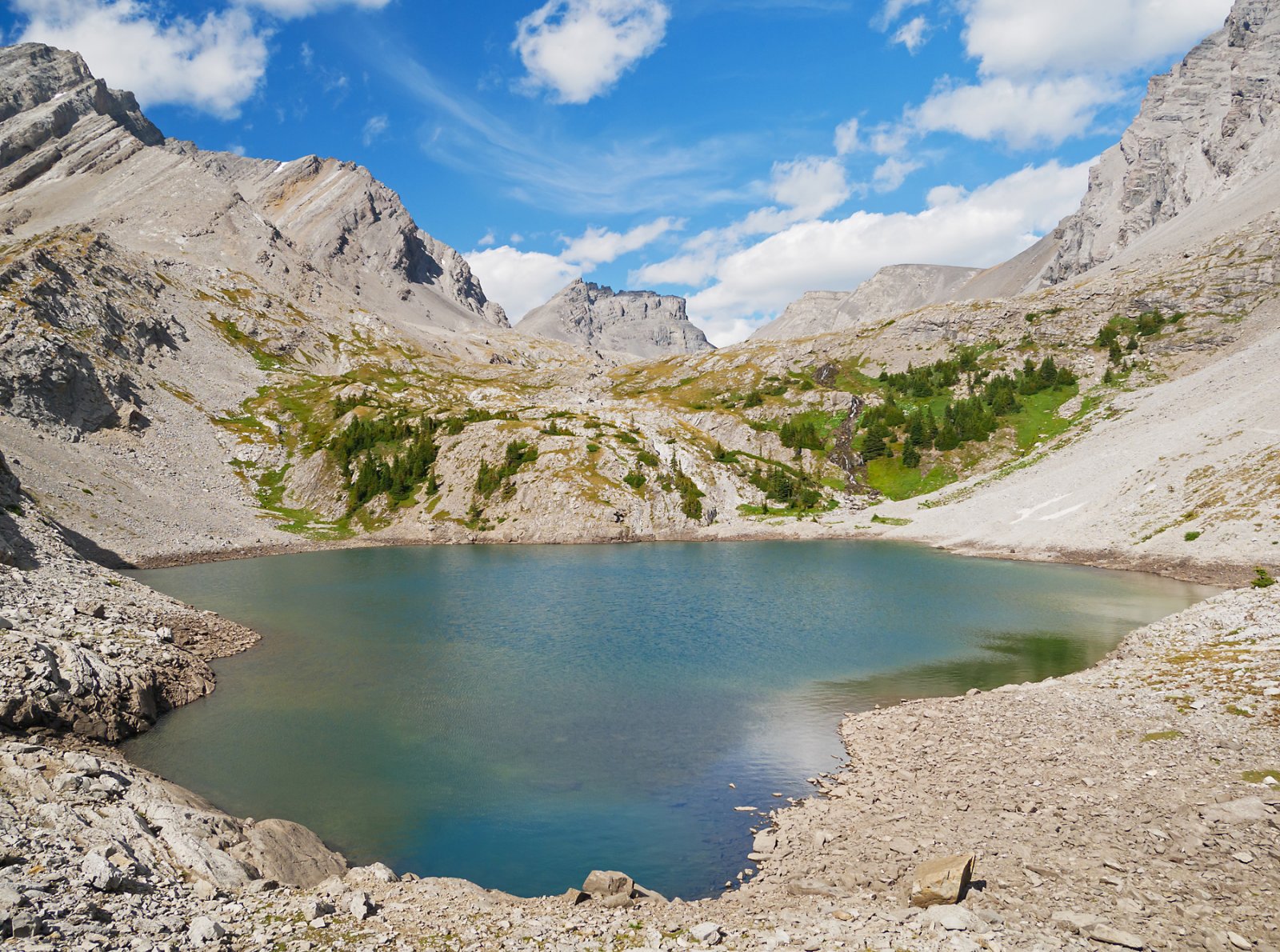 A last look back at lower Headwall. 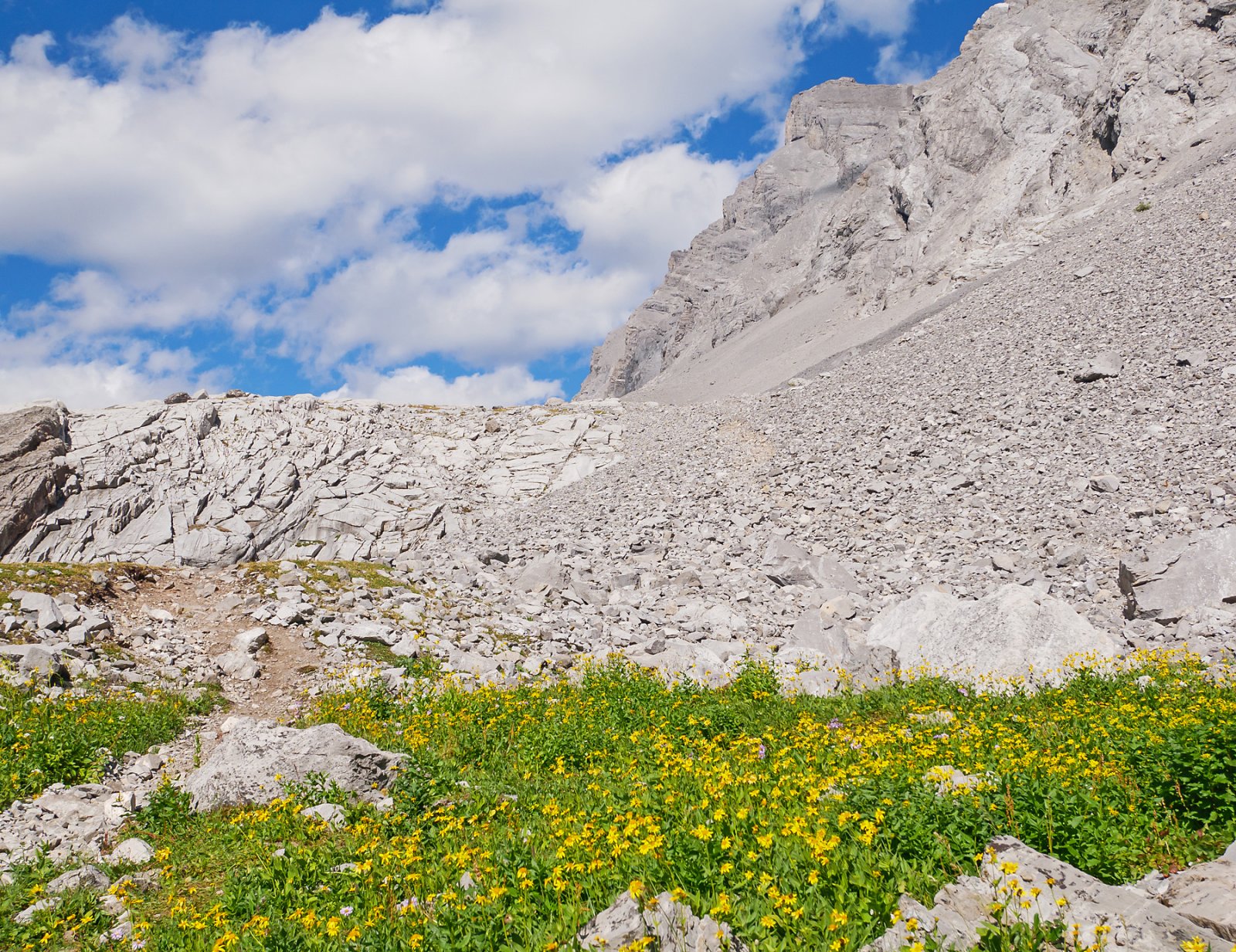 A stark contrast on the descent, between flowery glades and the seemingly barren limestone landscape. The adjacent talus slopes are a Pika hotspot- too elusive to photograph though. 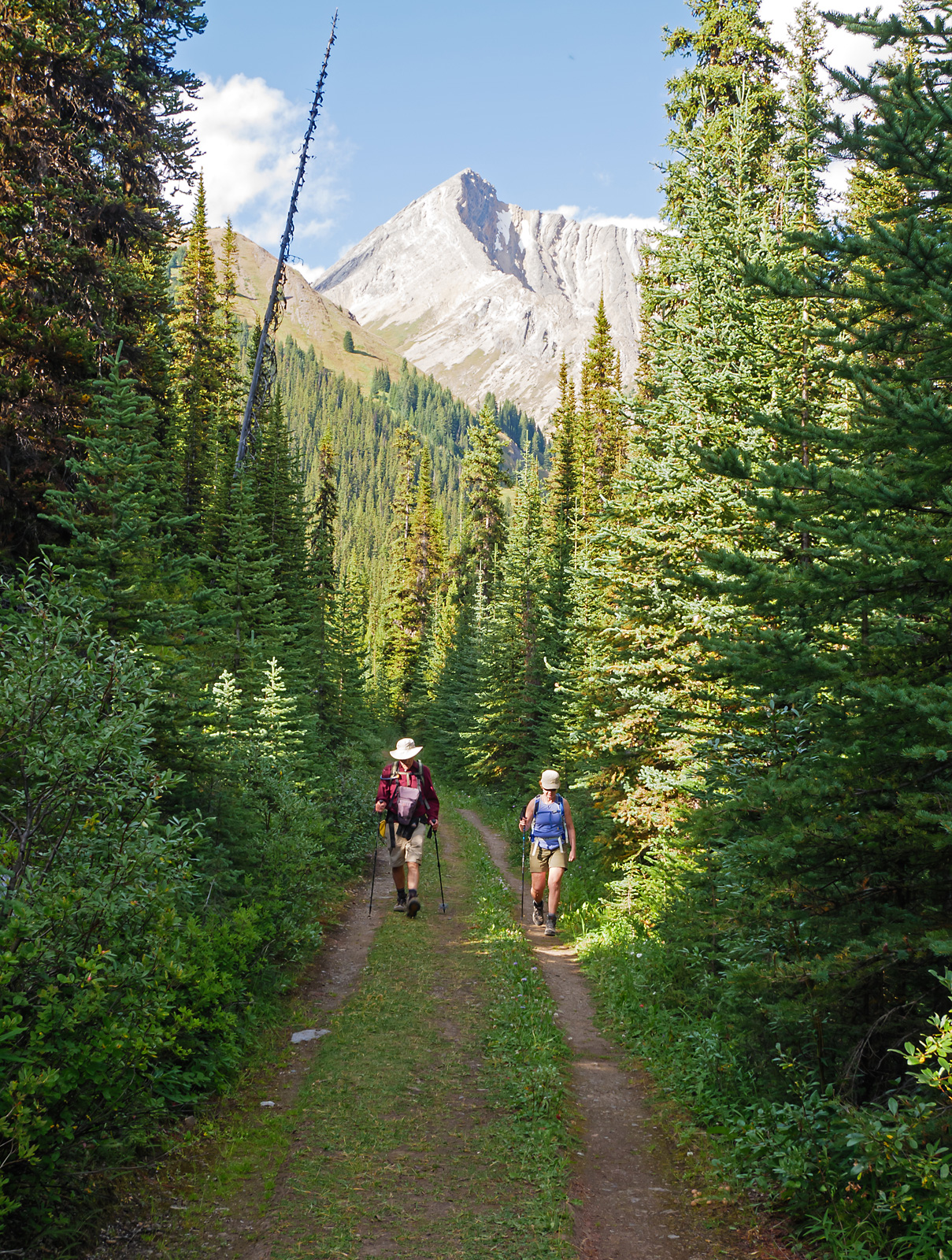 An easy shaded finish to the day along the old xc ski trails with Mount Chester above. The ski trails/old logging roads in this area that are often used to access several other hikes as well, can sometimes feature a bounty of wild strawberries that slow progress to a crawl (literally!). Not today however- they are done for the season.
It had been at least 10 years since we had last visited these gems of lakes- I'm glad we did, on what turned out to be a perfect day with friends in the mountains.
https://steveriggs.smugmug.com

Nice Hike and photos.
I remember oogling at the Fortress years ago from the highway. Nice to see the other side.

Are crowds less or more this year? No internationals, but are Albertans flooding anything nearby like here in the states?

Ugly said:
Nice Hike and photos.
I remember oogling at the Fortress years ago from the highway. Nice to see the other side.

Are crowds less or more this year? No internationals, but are Albertans flooding anything nearby like here in the states?
Click to expand...

It's been a mixed bag. The more popular day hikes within easy driving distance of Calgary have been swarmed by locals, far more than in the past. Less popular spots such as Headwall Lakes seem to be about the same. A bit further west, in places that have been high on the international traveler "must see" list such as the Lake Louise area, I have heard that the crowds are somewhat less than in previous years, but still quite busy as Albertans take advantage of less tourist traffic. Recently we spent a few days car camping and hiking near the Columbia Icefields on the Banff NP- Jasper NP boundary. No tour bus or rental RV's meant for much less traffic on the Icefields Parkway, and plenty of camping available despite about 50% of national park campgrounds remaining closed this summer.
https://steveriggs.smugmug.com

Just beautiful- thanks for sharing. You mentioned the tardy start- is it common for the weather to be this nice in the afternoon in that area? In Colorado we usually had to be off the mountain by noon or maybe 1pm ideally in the summer before the storms arrived.

Talk about a blue sky! Everything just looks so stunning!

Looks like a great day, need a photo of Piper to make the trip report complete
My trip reports: backpackandbeer.blogspot.com

Titans said:
Just beautiful- thanks for sharing. You mentioned the tardy start- is it common for the weather to be this nice in the afternoon in that area? In Colorado we usually had to be off the mountain by noon or maybe 1pm ideally in the summer before the storms arrived.
Click to expand...

The stable weather all week made afternoon thunderstorms very unlikely on that day. But yes- they can be an issue here too. A typical pattern in our area when conditions are conducive- which can be weeks at a time during peak season in mid summer- is that they build up at mid-day over the front ranges, then drift eastwards in the prevailing upper flow and unleash their full fury on the foothills and prairies, from mid afternoon into the evening.
https://steveriggs.smugmug.com
You must log in or register to reply here.
Similar threads