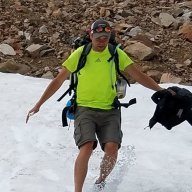 I woke up the next morning after a hike the previous day, in which I was only able to make the last couple miles with assistance from a SAM splint. The night before, we decided that unless my ankle somehow got better, that we would need to try to hike out. Thanks to a little prayer and rest, I woke up next morning with an ankle that was a little sore, but in fine working condition.

Instead of hiking out, we decided to a short hike back on the Highline Trail towards Little Seneca Lake and Lester Pass. That way, if my ankle did act back up we would be closer to the trailhead. We had had big breakfast with pancakes, eggs, and bacon and started off down the trail. As I hiked, my ankle only felt stronger and better the farther we went. When we got to Little Seneca Lake (actually a lake just to the east of Little Seneca Lake), I was ready to continue over Lester Pass. However, the others decided that after the long day yesterday, that they had enough hiking and wanted to rest.

We stopped to make camp between the Highline trail and the Lake in a grove of trees. This was the only campsite during the entire trip that we would not have been able to stay at if we only had tents. After we set up the hammocks, I decided that I wanted to do some exploring on my own. I climbed the hill right above camp. From the top of it, there were several little pools and one stunning view of Seneca Lake. (Unfortunately, I did not bring my camera, so I have no pictures.)

Later that evening, we had a special treat after dinner. My friend David brought a Reflecto Oven with him. (Relfecto Oven Description) Now originally, when he said he wanted to bring any sort of oven on the trip, I thought he was crazy. I will make a separate post on the Reflecto Oven later, but it wasn’t nearly as bad I thought it was going to be. Also, because of it, we could have hot Krusteaz blueberry and apple cinnamon muffins 10 miles into the wilderness! The blueberry muffins were amazing! However, the apple cinnamon muffins tasted like dirt! After eating the muffins, we spent the rest of the night talking about what foods we were going to eat when we got back to civilization.

The next day, we got up and hiked over Lester Pass to the Lower Cook Lake. The hike was uneventful until we had to ford across Pole Creek in which I decided to soak my hiking shoes in mud right after putting them back on after crossing.

We got to Lower Cook Lake and started setting up tarps for the hammocks. Naturally, we each had had our own idea on how to set the tarps to best keep out the rain. We eventually came up with a solution how the tarps should be set. After setting up camp we took some time to clean our crusty clothes out and jump in the lake. Like all the other lakes, it was absolutely freezing! Thankfully, it took us about 30 seconds to dry thanks to the sun and dry mountain air. After we finished, we noticed a cliff across the lake about 30 feet above the water and decided we had to it up after dinner. Thanks to the water clarity, we could tell the water under the cliff was deep enough to jump in to and we went for it! 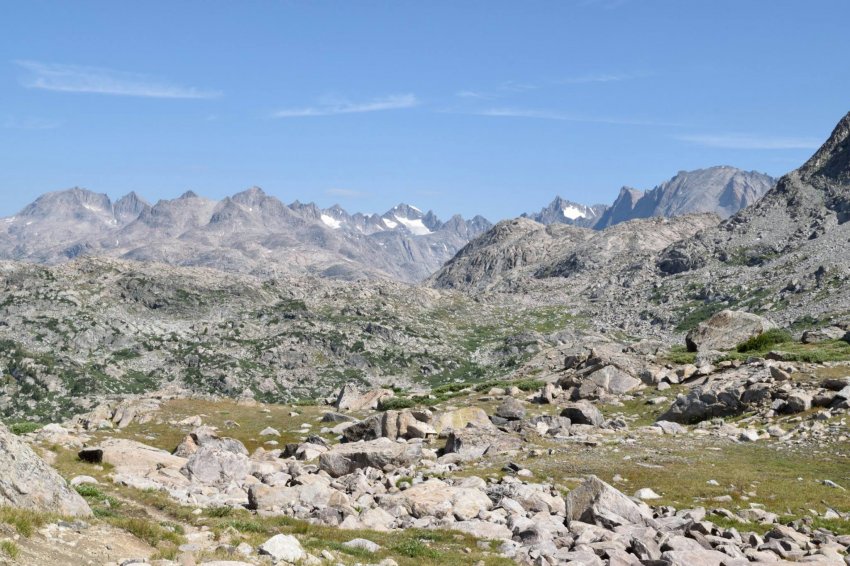 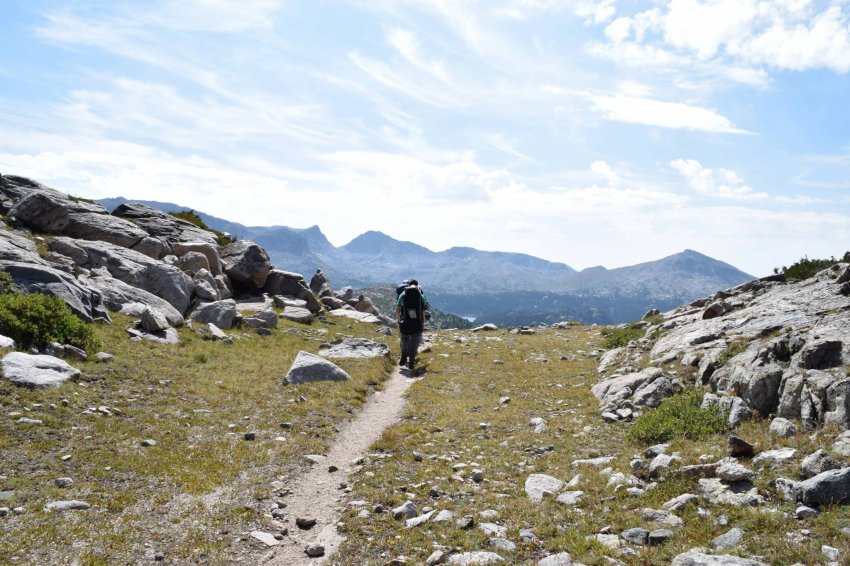 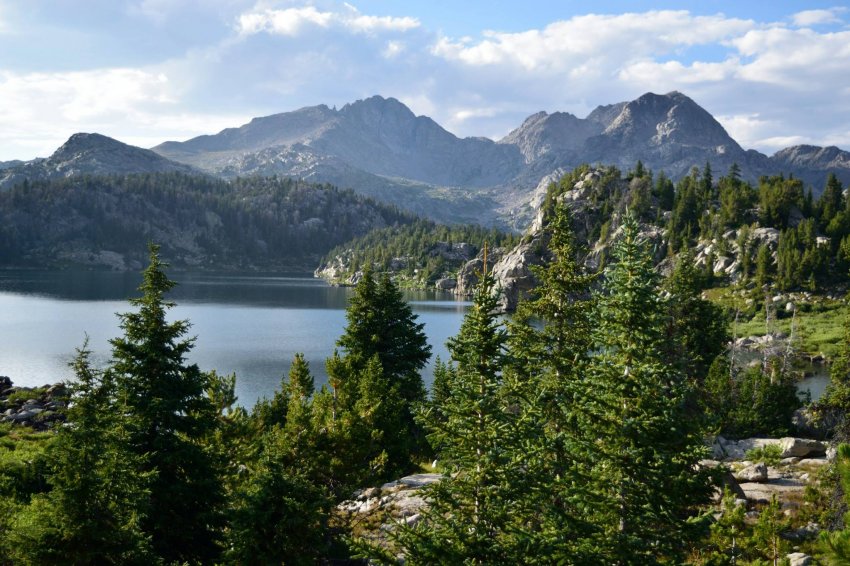 Mt Lester from our campsite 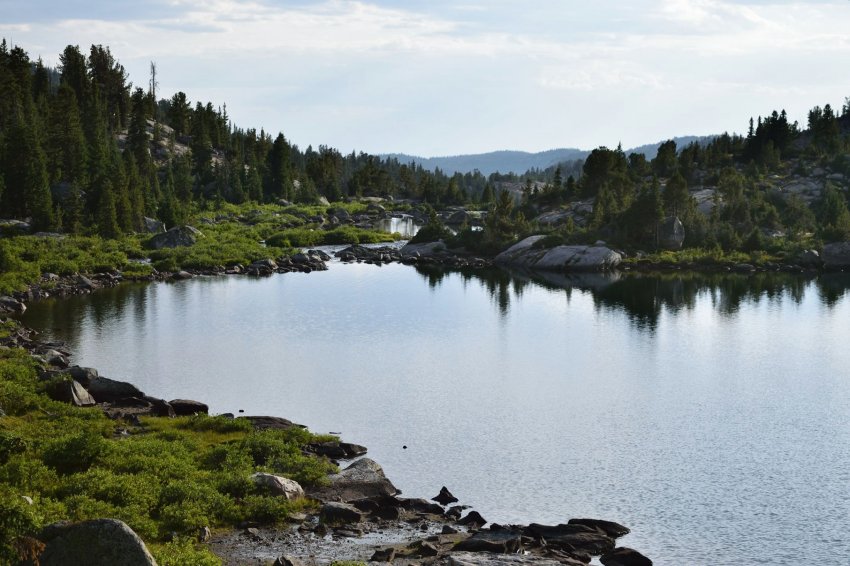 View west from the campsite 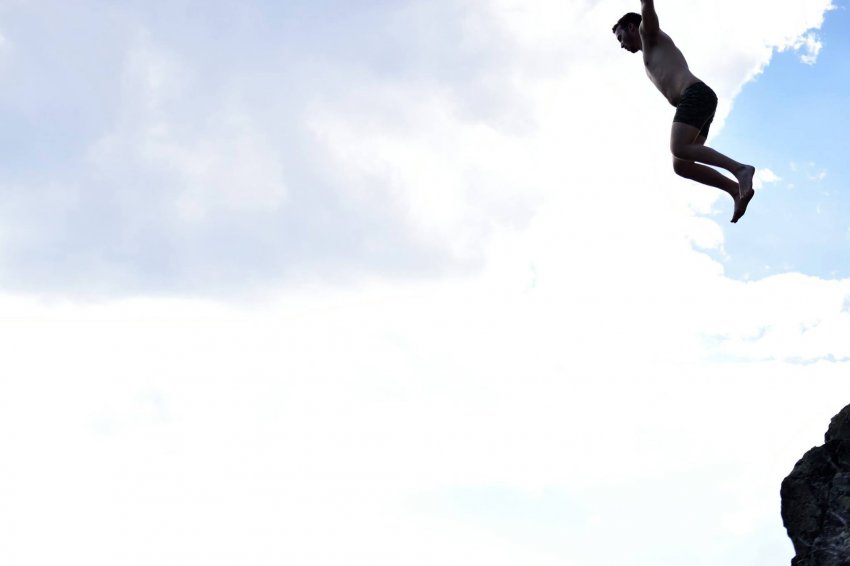 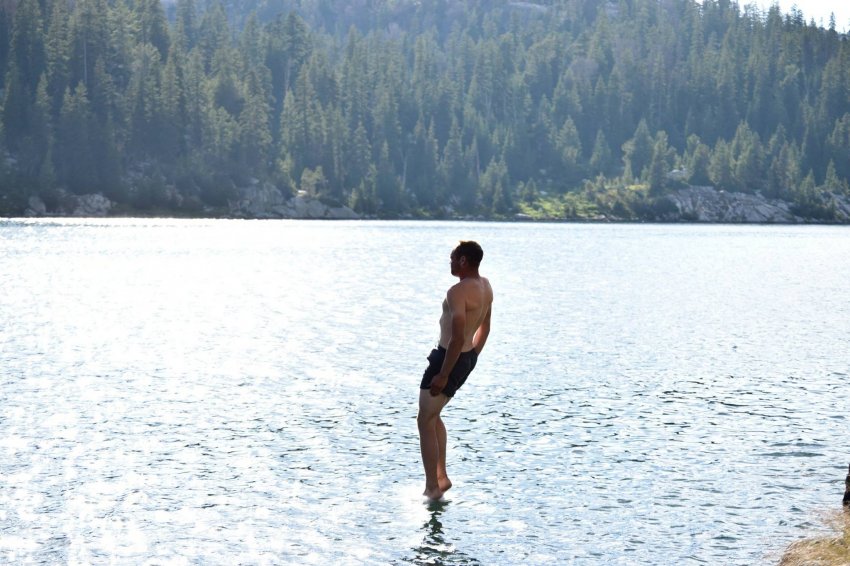 Me landing in the lake 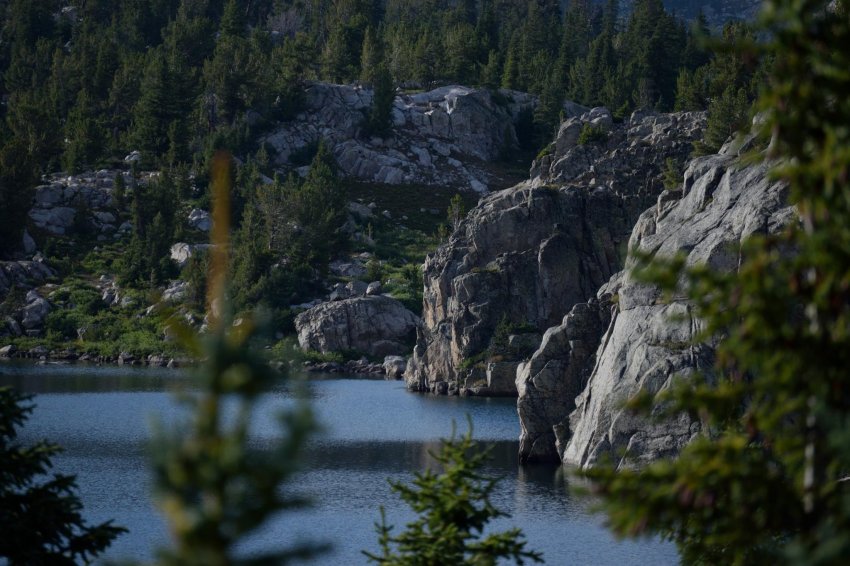 Looking back at the cliff

Day 6 Dayhike up to Angel Pass
The next morning, we woke up to cloudy skies. This worried me; being that the last day we woke up with cloudy skies, it stormed the whole afternoon. Despite the ominous sign, we decided to continue with our plan to hike off-trail to Angel Pass and perhaps Angel Peak or the lakes on the east side of the pass. To get to Angel Pass, we followed the stream that flowed into the south end of Lower Cook Lake to Spider Lake. The bugs up by Spider Lake were by far the worst of the trip. It was the only time we used bug spray, which didn’t work because it was the all-natural DEET free kind. From Spider Lake, we headed for the pass. Hiking up Angel Pass was much more of a scramble than a hike. It was quite steep and we had to climb over boulders which approached the size of a mid-size cars.

As we climbed, I noticed that there were thunderstorms starting to grow in the plains to the west of the Wind River Range. When we finally got to the pass, I pulled out my phone to see if I could check the forecast. I had just enough service and just enough battery to see that the forecast was for storms for the rest of the day and the radar was showing the storms heading right towards us.

We decided to get down and back to camp as fast as possible. We did not want to climb down the boulders while they were soaked; nor did we want to be above the treeline in a lightning storm. We got back to the camp just in time to see the storm pass just to the south of our campsite. Shortly after, another storm passed just to the north of us. Later in the evening, a third storm passed just to our south again. I would have rather not had the storms so we could have enjoyed more of Angel Pass, but the third storm gave us one of the best sunsets I had ever seen. 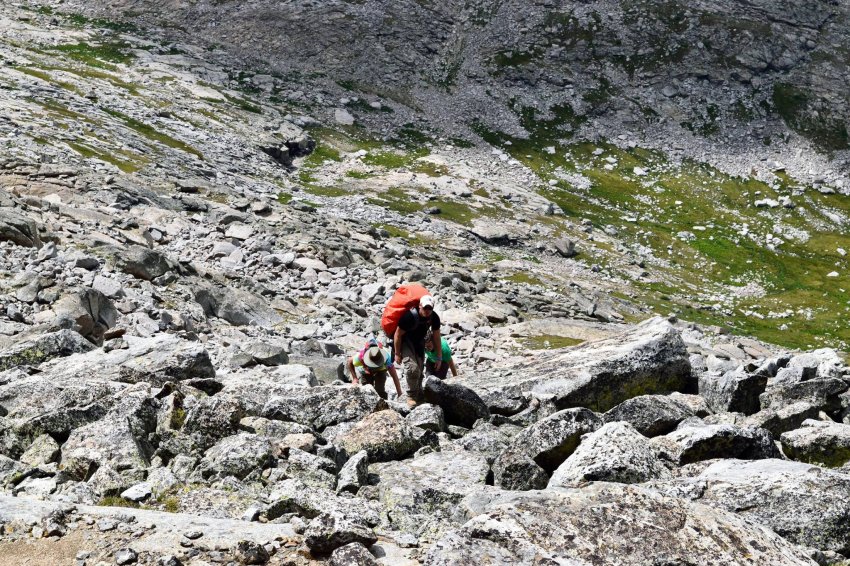 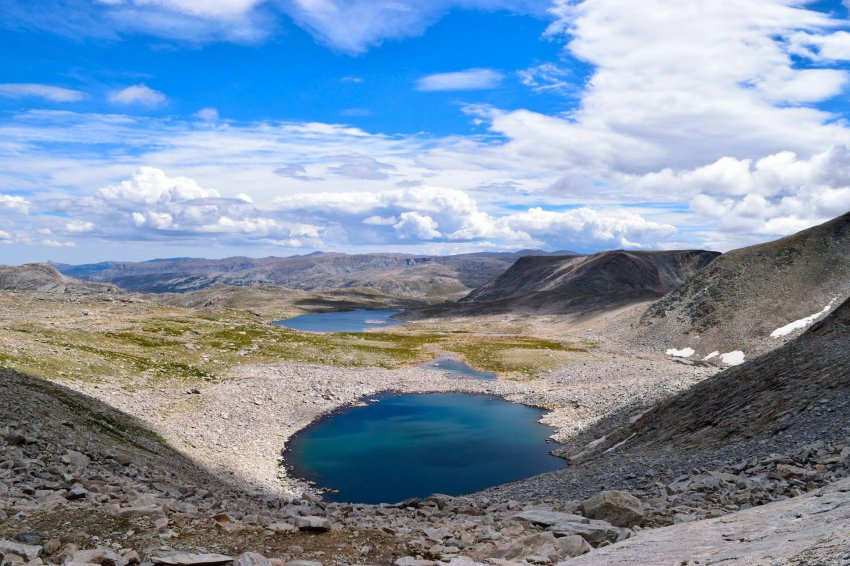 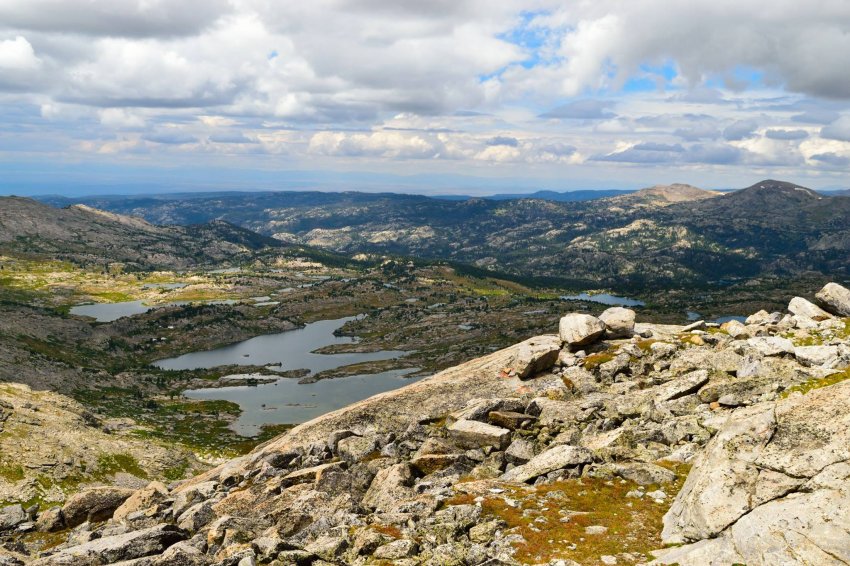 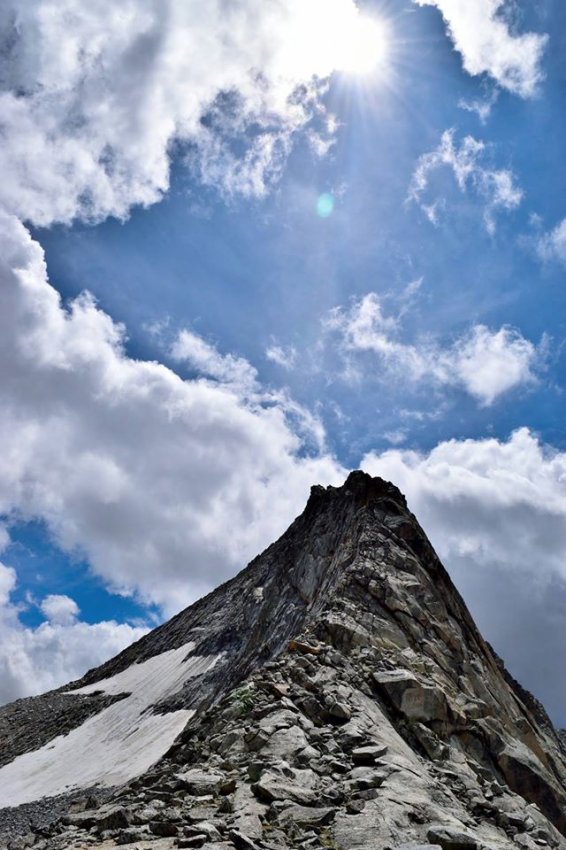 View at the Continental Divide 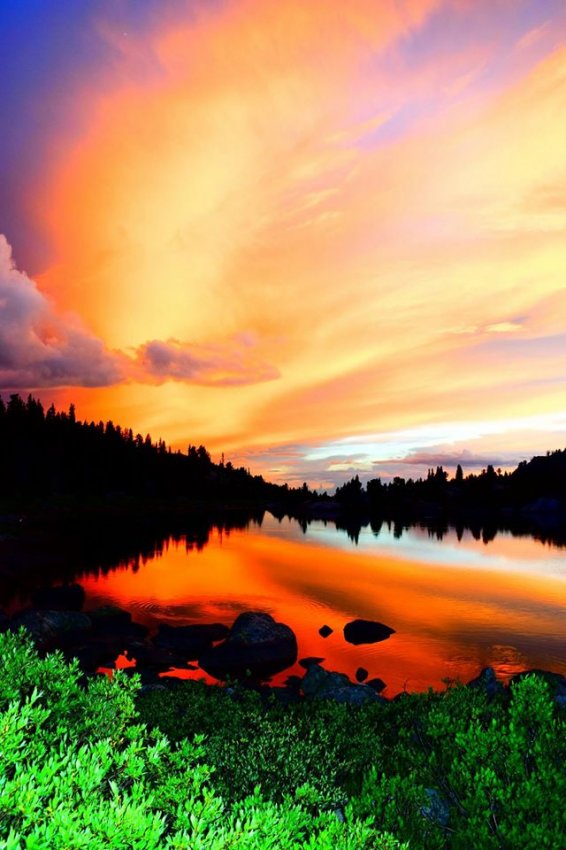 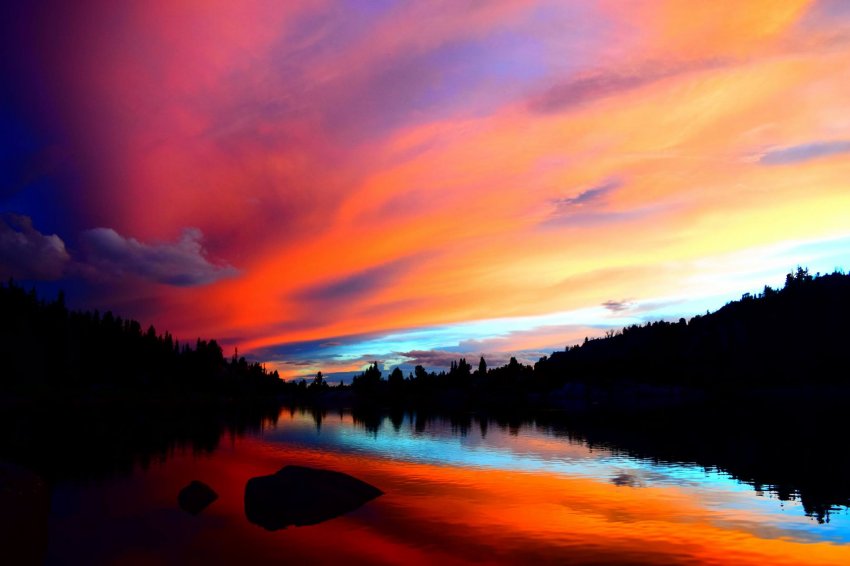 Sunset for the ages 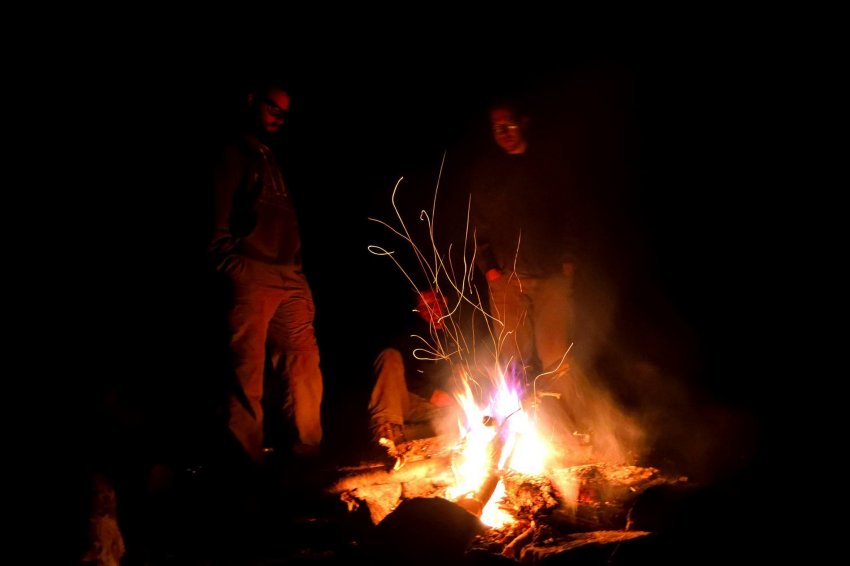 Campfire in the mountains 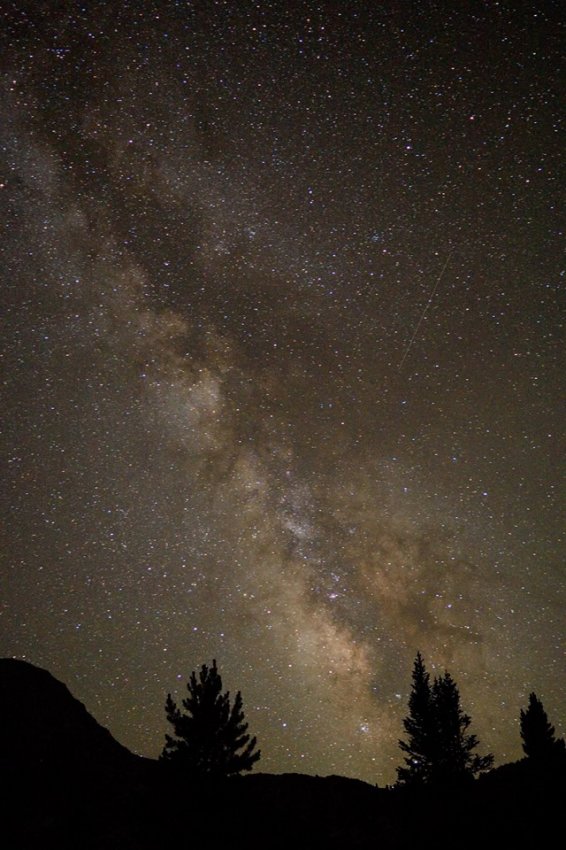 Nothing beats the stars in the mountains

The next morning, we woke up with the intention of having a rest day. We had pancakes, eggs, bacon, and hash browns. After being thoroughly full, I decided I didn’t want to sit around all day and convinced the others to go up to Upper Cook Lake and Wall Lake to see if we could find more good cliffs to jump off. We hiked around the east side of Upper Cook Lake to Wall Lake. Both lakes were beautiful, but did not have any cliffs that were safe to jump. We followed the outlet of Wall Lake back down to Upper Cook Lake, and tried to follow the lake around the west side. The west side of Upper Cook Lake is extremely overgrown and took us a good two hours to get around.

When we got to the north end of the lake, I decided to take a game trail that paralleled the lake higher up while the others stayed close to the lake. I made good time quietly walking down the trail until I heard a rustling in the undergrowth. I looked in time to see a moose calf and its mother run out of the brush. Thankfully, they were running away from me, and not at me. Naturally, this still scared the crap out of me. I waited for a couple minutes to allow the moose to clear out of area. I started hiking again, intentionally being much louder as not surprise another animal that would might charge me instead.

Having not found any cliffs worth jumping off, we returned to the cliffs we jumped the previous day. We spent the remainder of the afternoon jumping off the cliffs. We then made dinner and a campfire. No matter what subject was brought up around the fire, the conversation kept coming back to what foods we were going to eat when we got back to town. 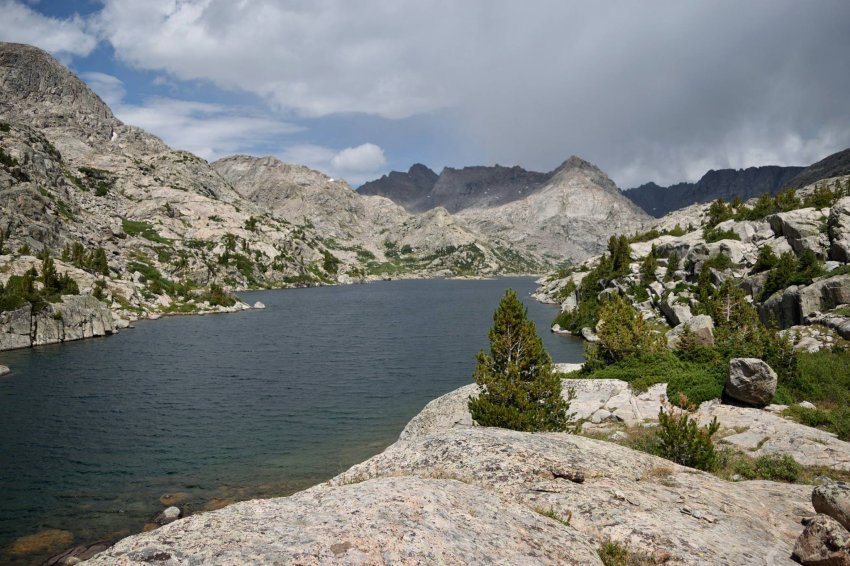 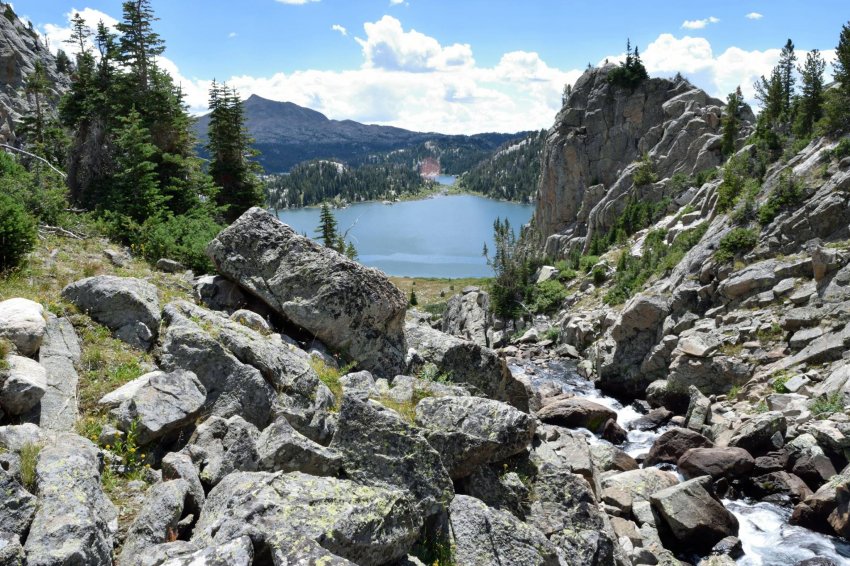 Looking Down into Upper Cook Lake 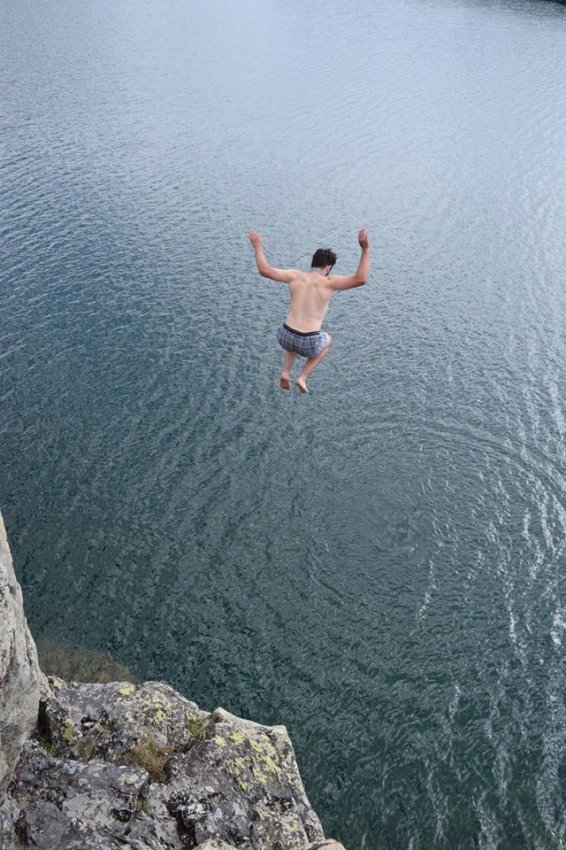 Finally got James to jump 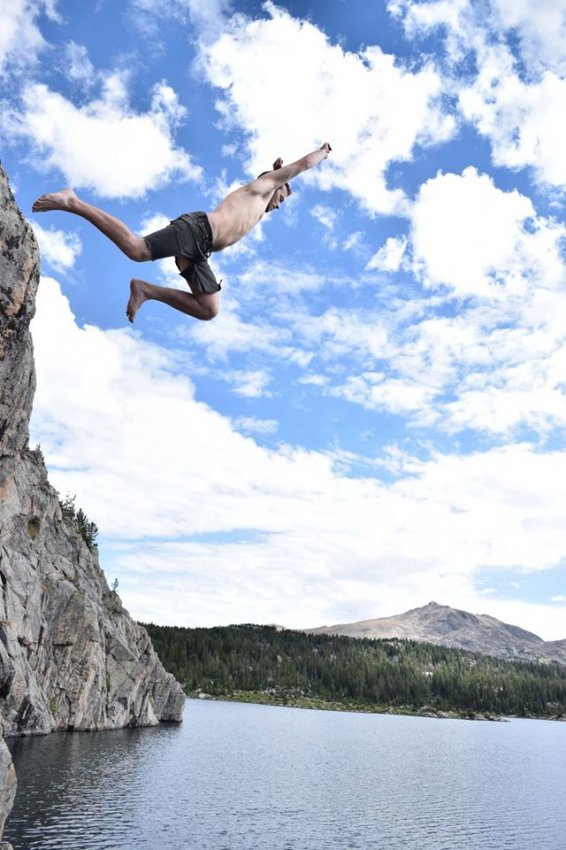 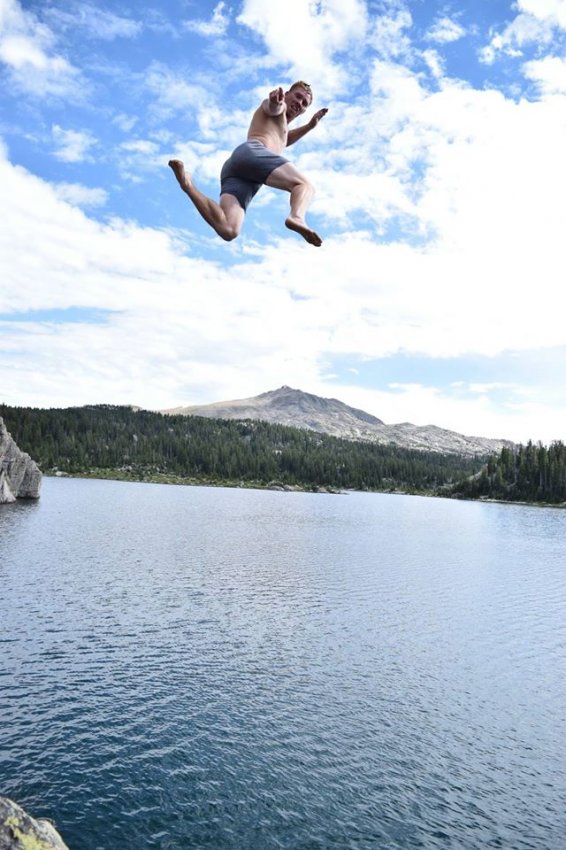 We got up the next morning with heavy hearts knowing that this was our last full day and that our trip was soon going to end. We left camp and started hiking down the Pole Creek Trail. We made excellent time and by 1pm we made it to Eklund Lake and by 2pm made it to Middle Sweeney Lake. We found a spot with a fire ring already built and decided to make camp there.

That night, we feasted on the rest of our food. We went to bed that night with flashes of lightning in the distance and knew that the Wind River Range was going to give us one more storm before we left. Later that night, we awoke to heavy rain, thunder, and hail. However, when we woke up the next morning we were delighted to see that our stuff stayed dry. We packed up our camp and hiked out, concluding an end to an unforgettable trip. 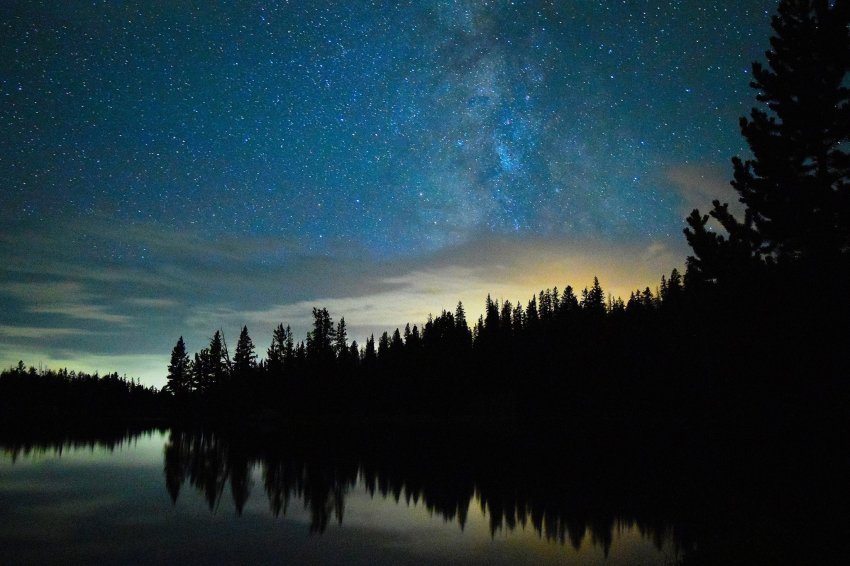 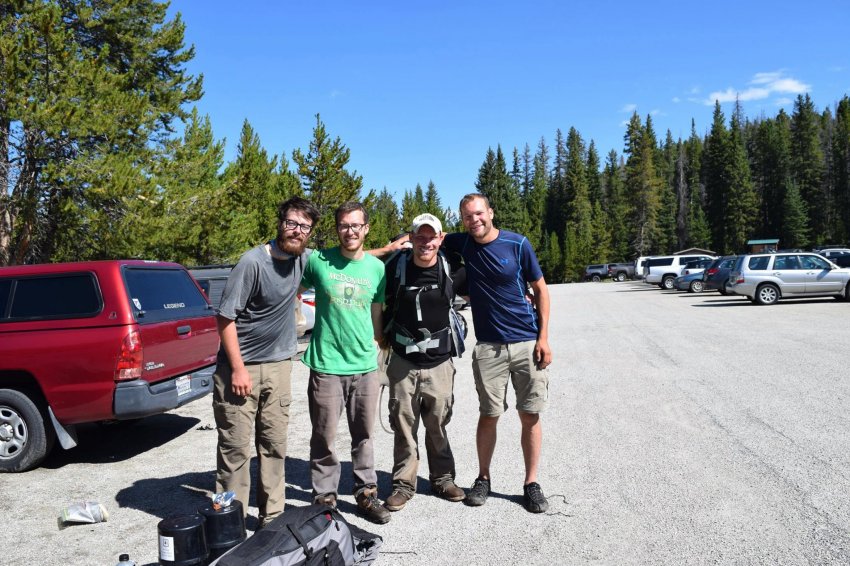 A little worse for wear, but still friends in the end

Thank sunset looks like it was amazing. Glad your ankle held out.

Right on! What a cool trip.

How were the Sweeney Lakes? I've always wanted to check them out but never have?
Click to expand...

Ah they were pretty cool. They scenery wise they weren't anything amazing, but they're good for being just a couple miles into the backcountry. It was just nice be in the woods. 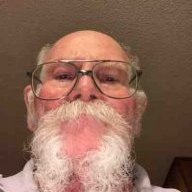 I enjoyed your rendition of your hike and the photos. I don't think I'll ever catch a sunset or sun rise as breath taking as yours. Hike on

Did you do a little light painting on the foreground bushes in that one sunset shot? It's outstanding, as are your night shots. An amazing sunset, for sure. What a great trip!
You must log in or register to reply here.
Similar threads