The spark for this trip came from an archaeological survey I stumbled across late last year that was conducted back in the first half of the 1900's. It detailed findings, though somewhat crudely, in the numerous canyons around Kanab. I had already known of a handful of sites in the area, but the report really opened my eyes as to just how extensive the prehistoric occupation once was. Using the report as a guide, I did my best to map out the ruins for a "boots on the ground" investigation and it quickly became evident that one could spend weeks, if not months, exploring the myriad drainages surrounding Kanab.

Fast-forward to this October.......Three things altered the original intention of devoting the better part of a week to finding "treasures" in south-central Utah. Namely - friends, trout, and sand. We'd been wanting to get together with some Arizona buddies and meeting up in Kanab was the first opportunity that worked for the four of us. They're not big into hiking, so poking around trail-less canyons in search of ruins was put to the side on the days we'd be spending with them. Then Blake threw out that he'd like to do some fly-fishing at the tail-end of the week (and somehow got me to agree to take lessons from the guide he hired for the outing!). That further curtailed the pursuit of ruins and rock art. On top of that we were driving our heavy 3/4-ton pickup that has little business being in the deep sand we unexpectedly encountered on the drive into our targeted canyon.

Anyway, here are photos from our trip. They're not great, but perhaps they'll serve to inspire someone to venture to the Kanab-area for more than just The Wave.

On Day One Blake and I located a small hill east of Kanab that once held several pits in which ancient peoples stored their food. To our untrained eye only one such pit was visible, with this slab of sandstone that once lined the construct protruding from the depression in the ground : 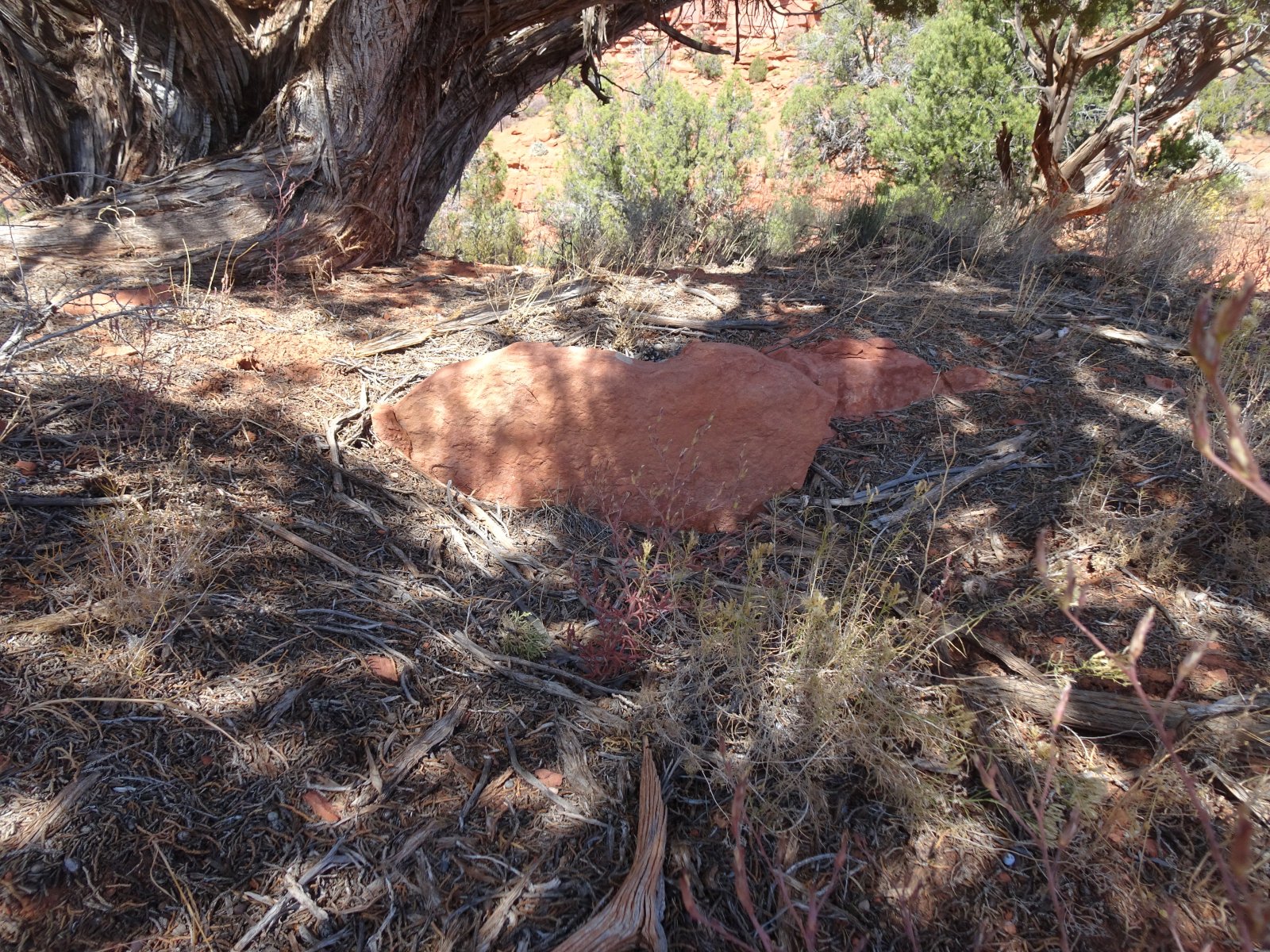 Hundreds of pieces of broken pottery were concentrated across a portion of the hill, with the majority being plain grayware and an occasional black-on-white. Here's one of the bigger pieces we found : 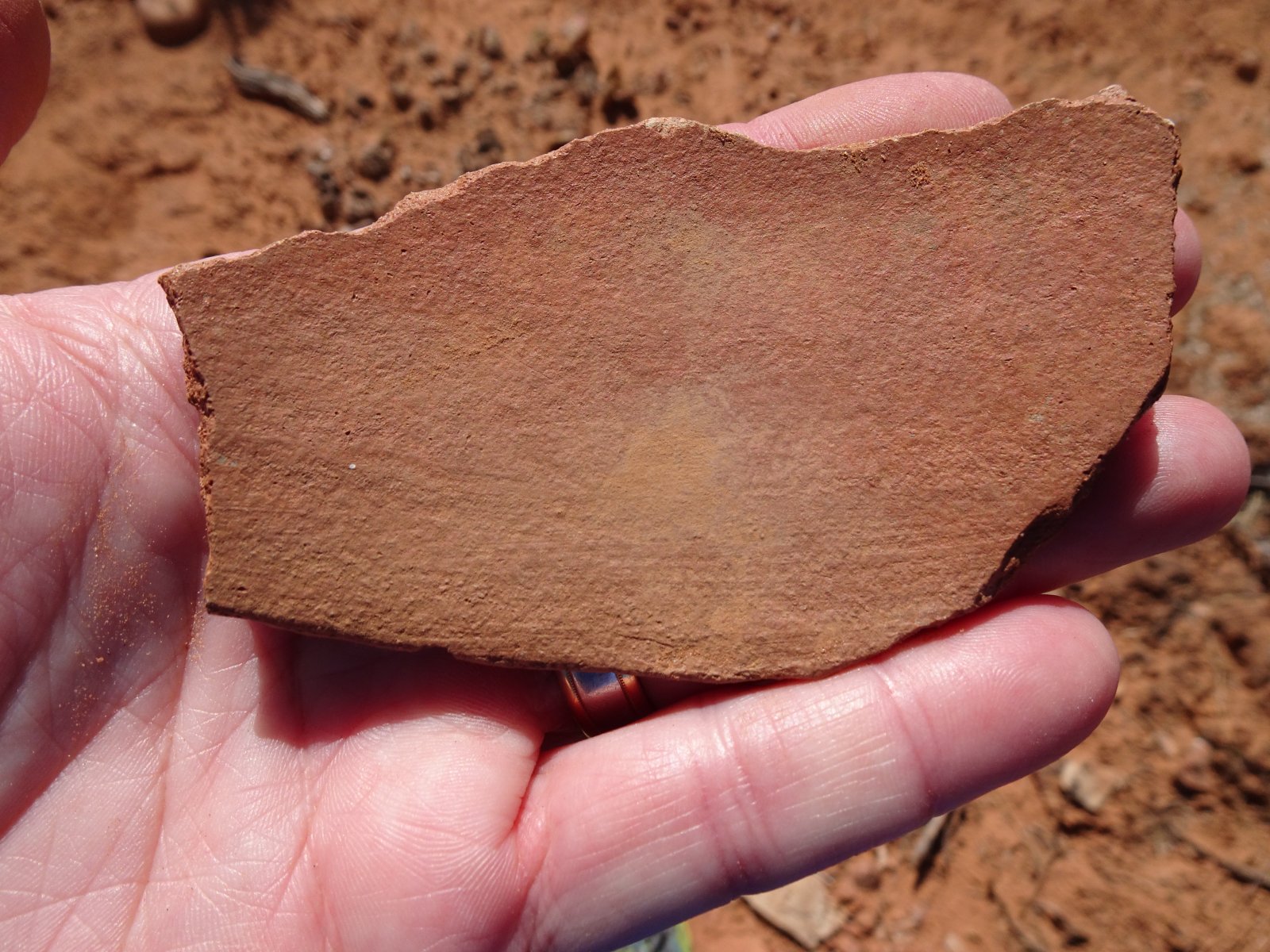 That evening we met up with our AZ friends and asked them to take charge of the next day's activities. In turn they asked a GSENM ranger to recommend an easily-accessible slot canyon and were told "Buckskin Gulch" was just the ticket. Blake and I had gotten into Buckskin years ago, via Wire Pass, and knew the small obstacle shortly before it's confluence with Buckskin would not be suitable for our friends. As such, it was decided to start from the Buckskin Gulch trailhead up-canyon from Wire Pass. Having not planned for this hike, I didn't know what to expect nor whether any of the known petroglyphs would be in the section we'd be hiking.

What a great surprise! 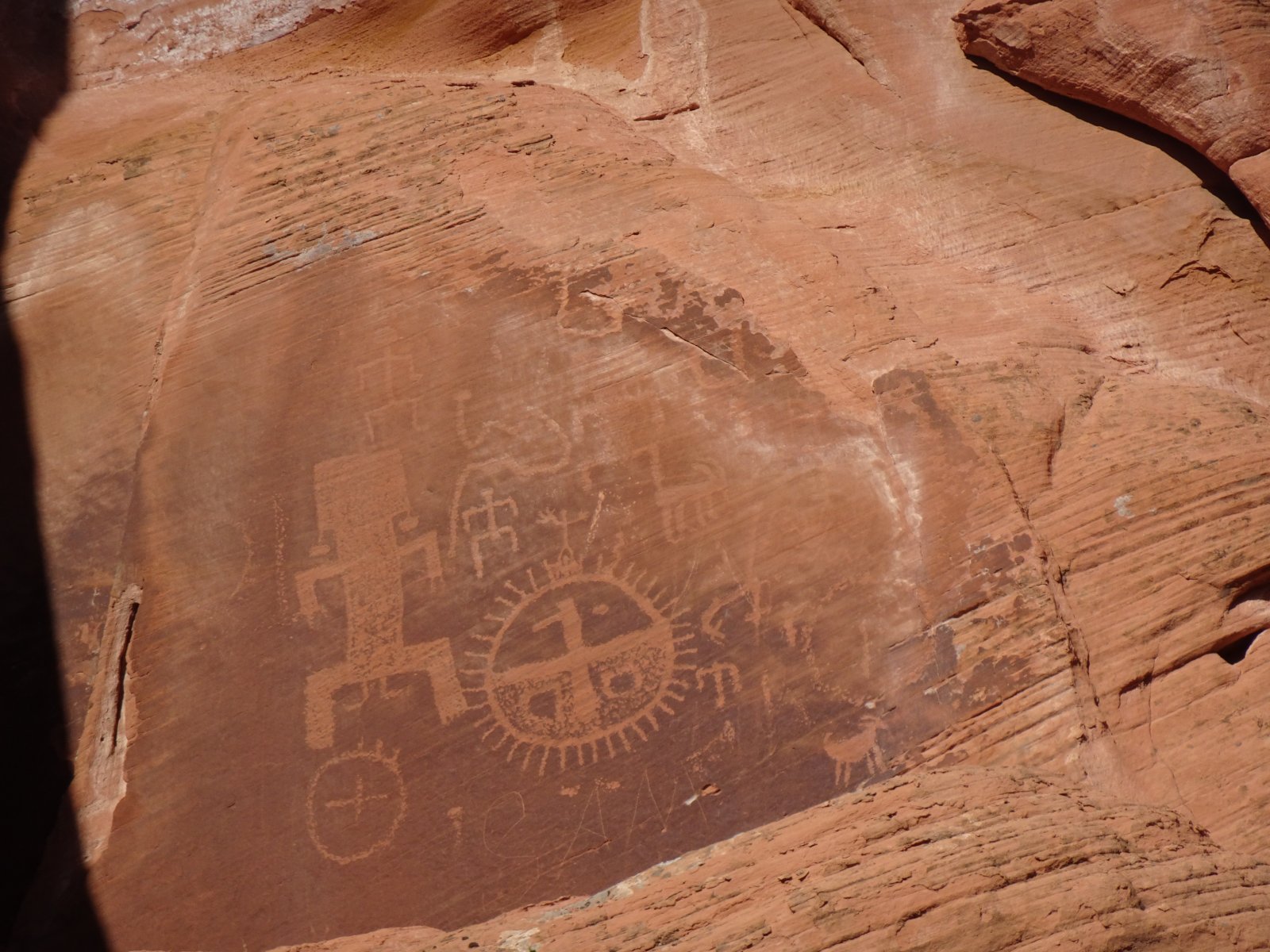 Blake got his own surprise when he stumbled upon this dude. Turns out he was dead : 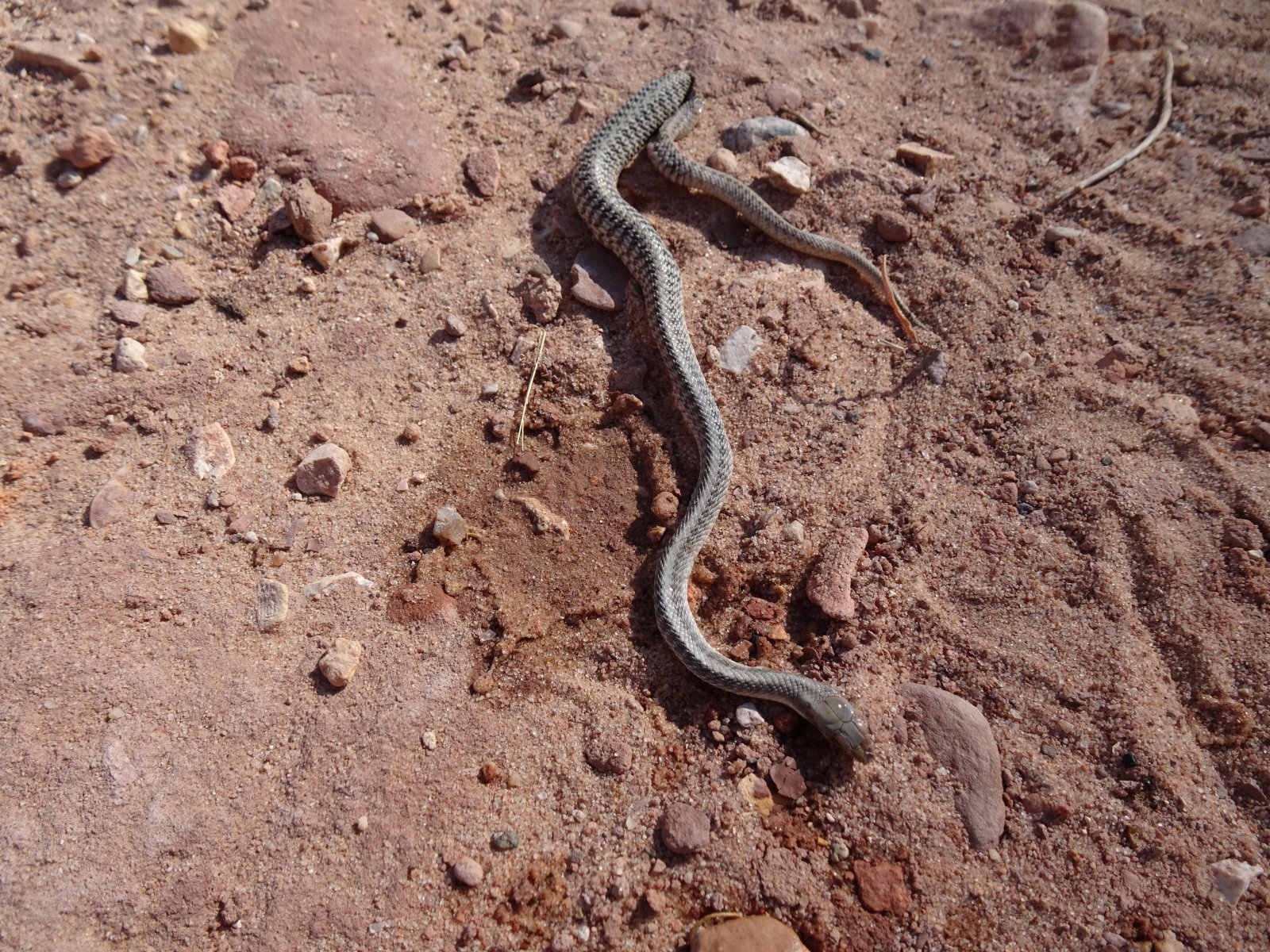 Views from the decidedly un-slotty (at least in this upper section of) Buckskin Gulch : 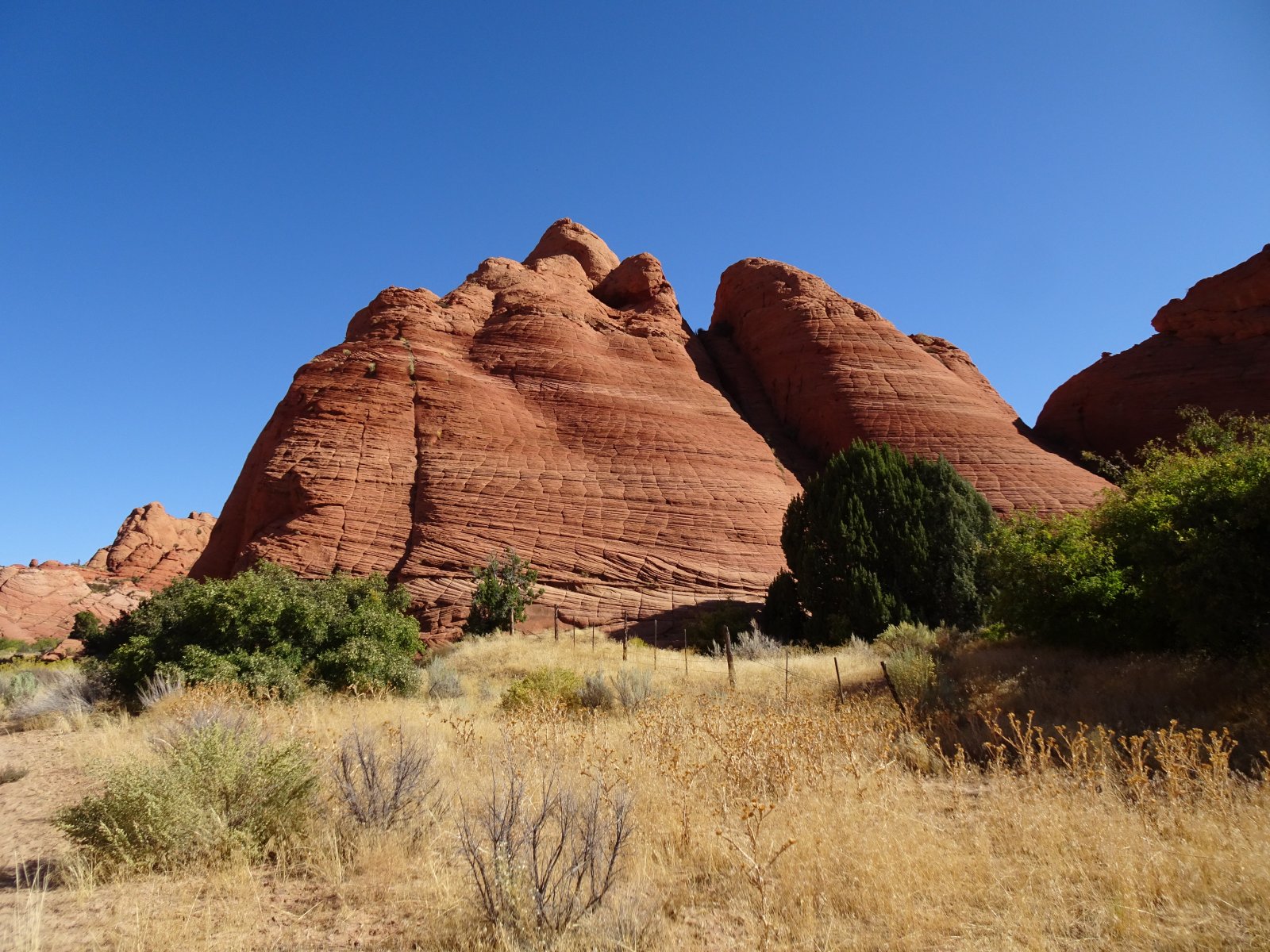 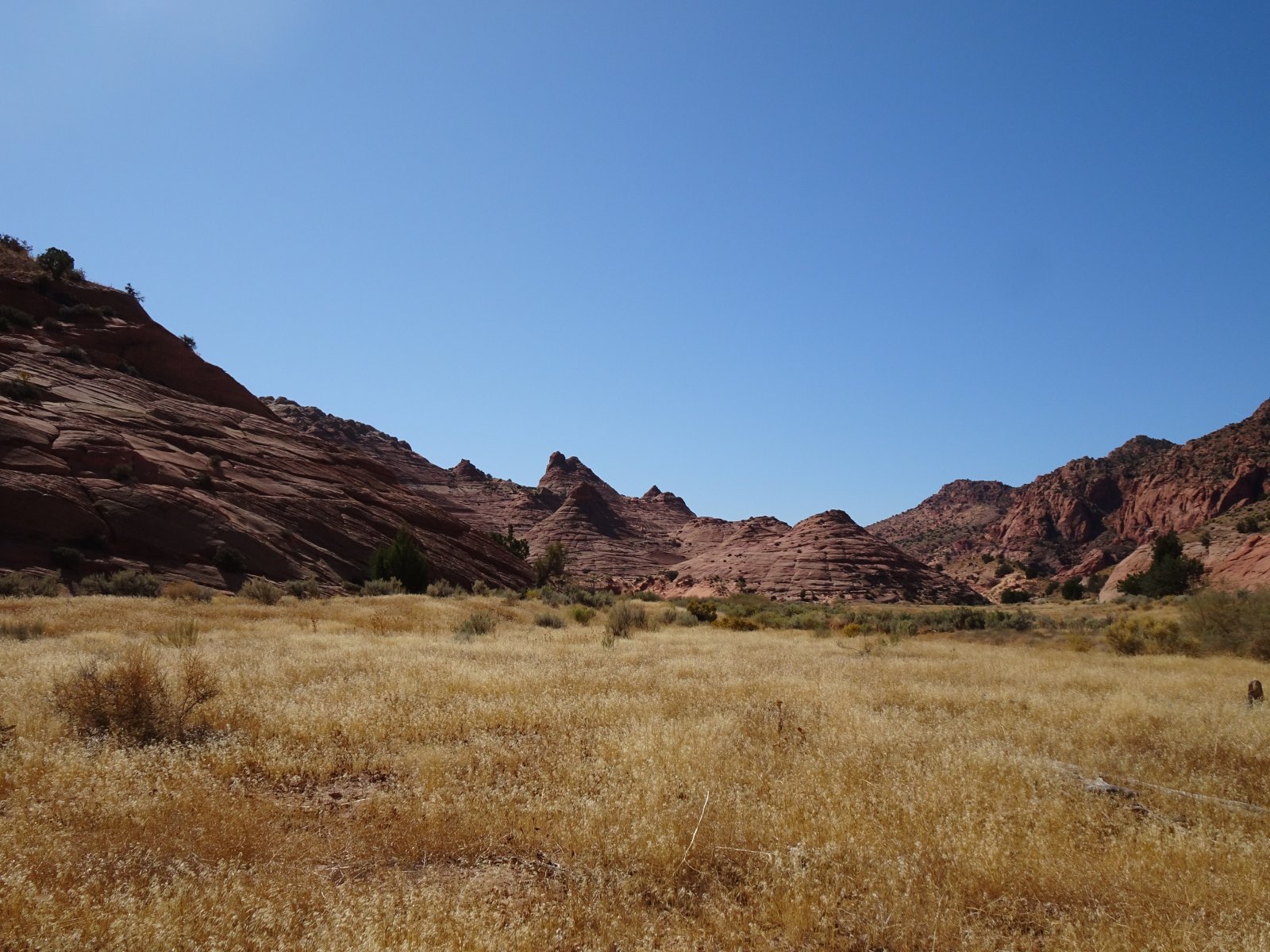 The following morning Blake and I chose hiking to The Nautilus for the group. It's an easy, 1-mile-ish round-trip hike with little elevation gain to an unusual rock formation. Our friends debated in the back of the pickup whether the formation would look like the shell of a marine mollusc or a nuclear submarine. I kept my knowledge to myself so as not to spoil their anticipation.

Our first look at the mollusc. Probably better photos are to be had in the afternoon : 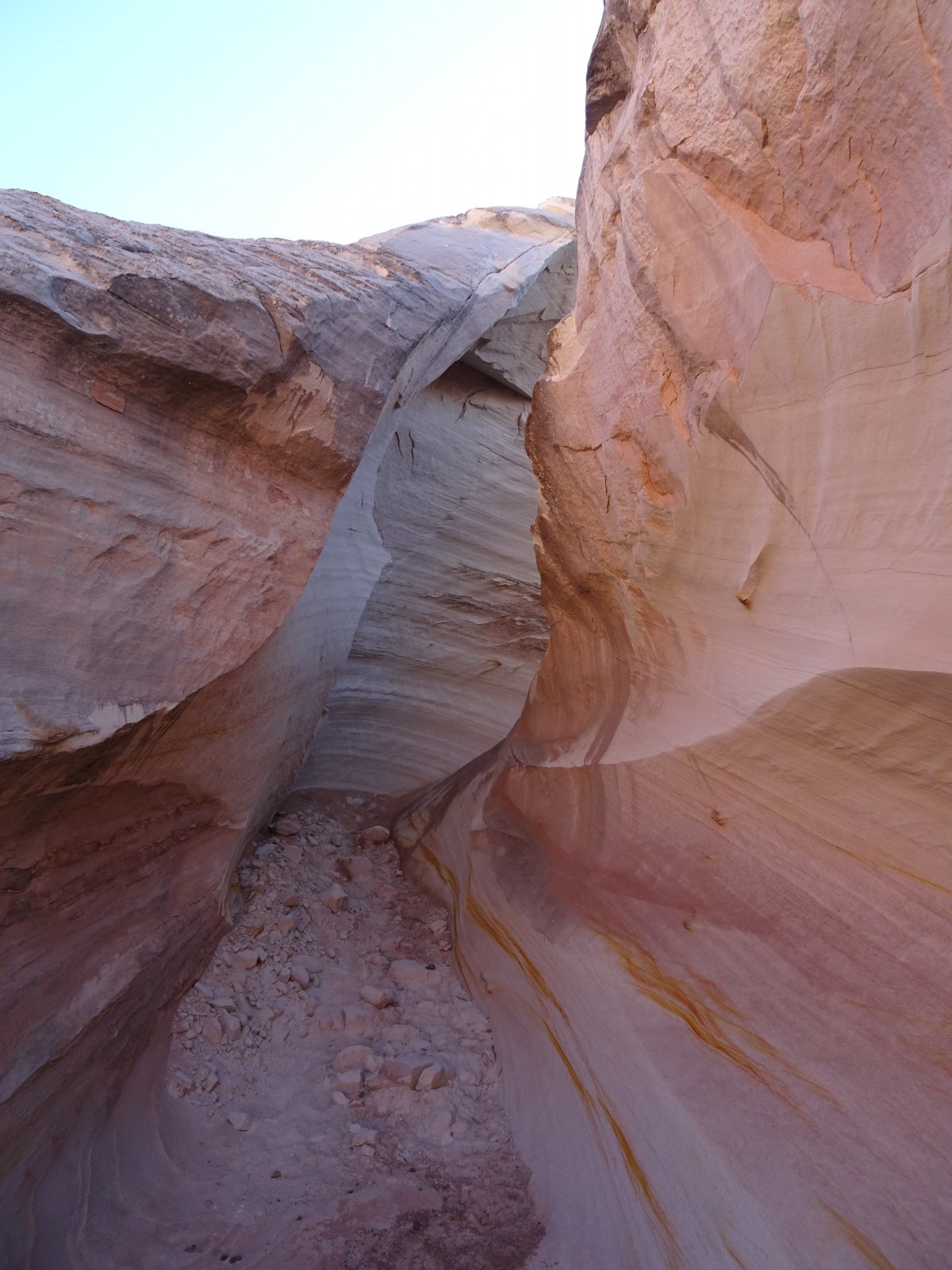 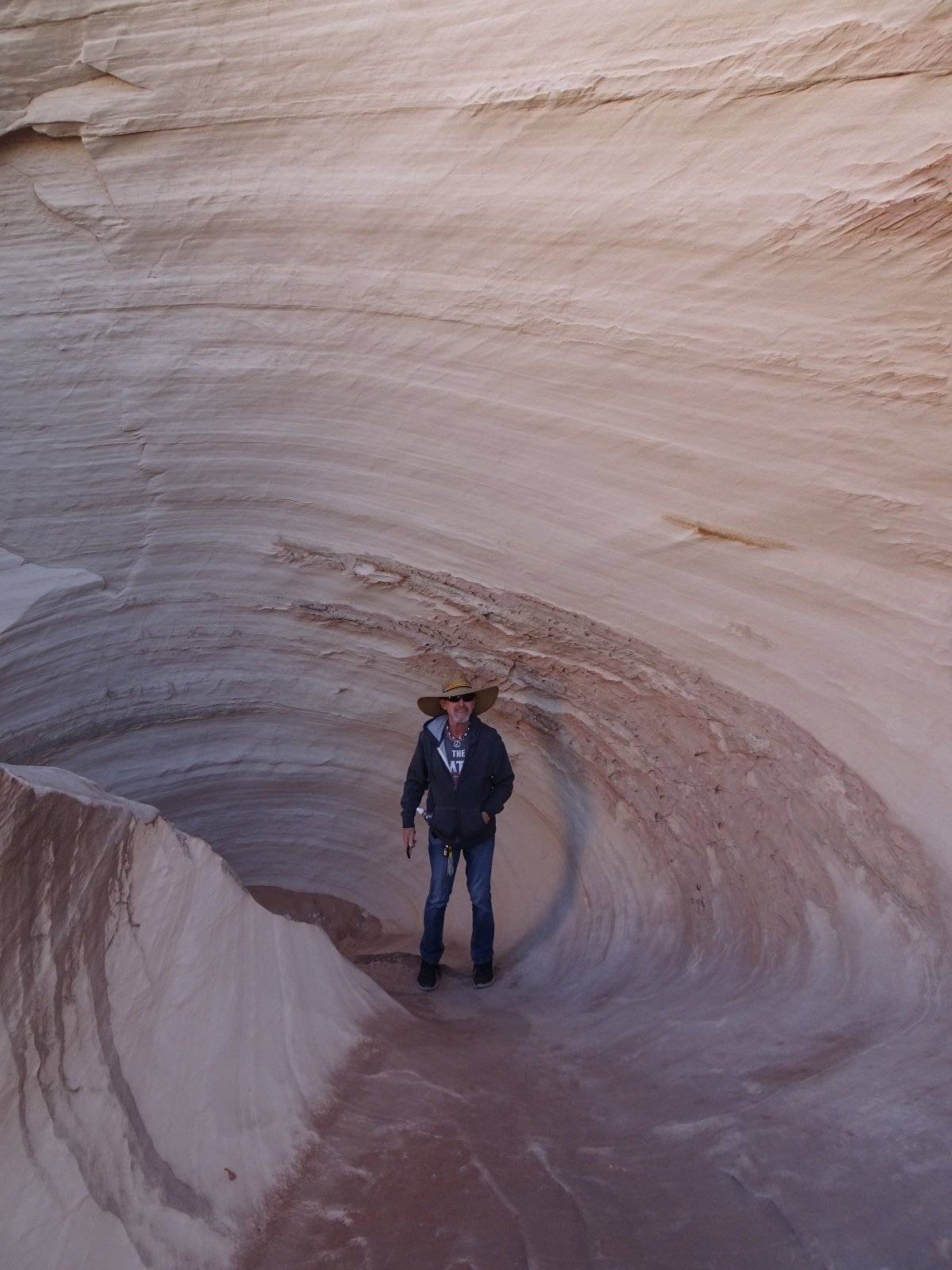 Blake trying to sort out how the giant swirl had formed : 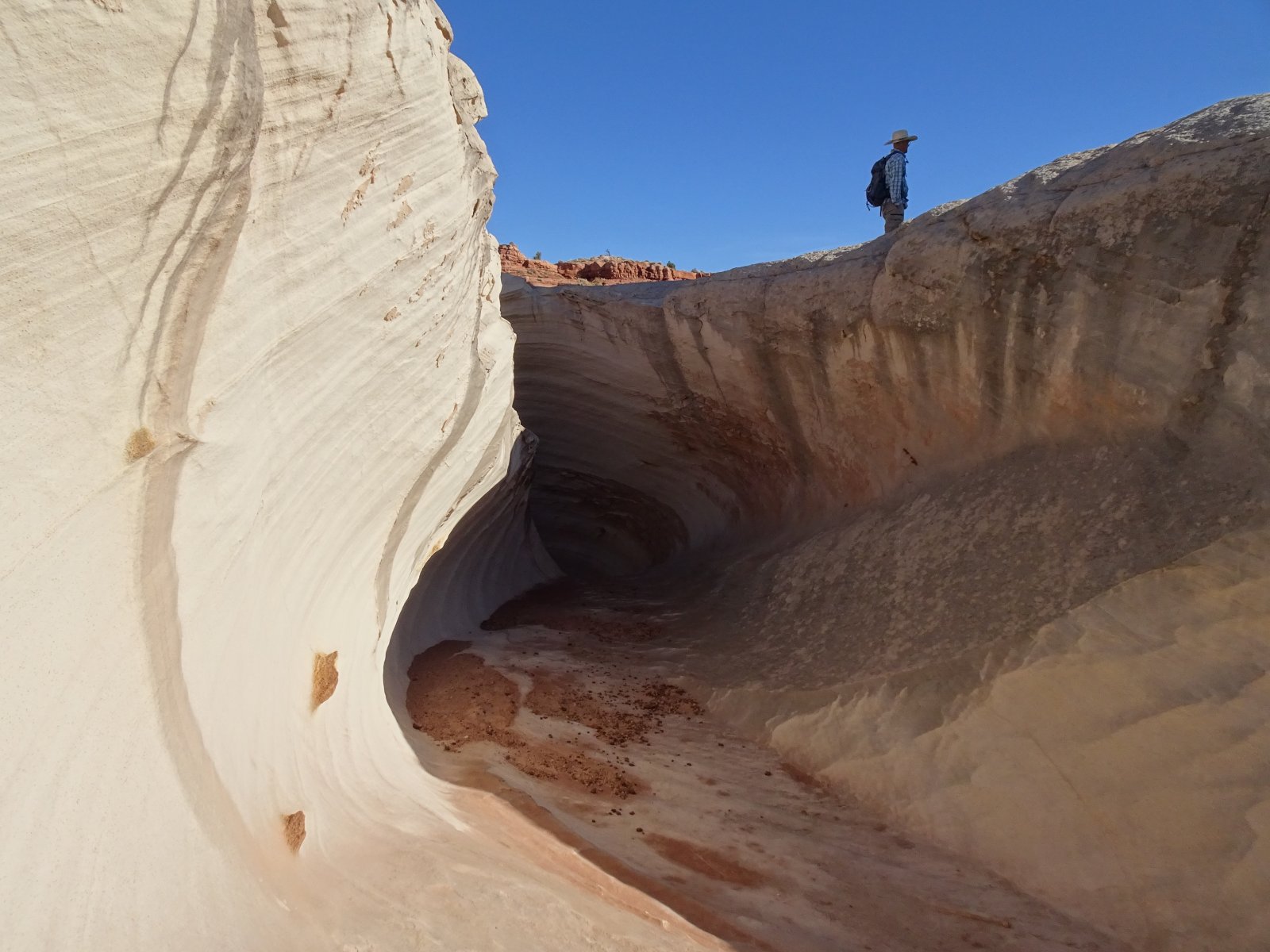 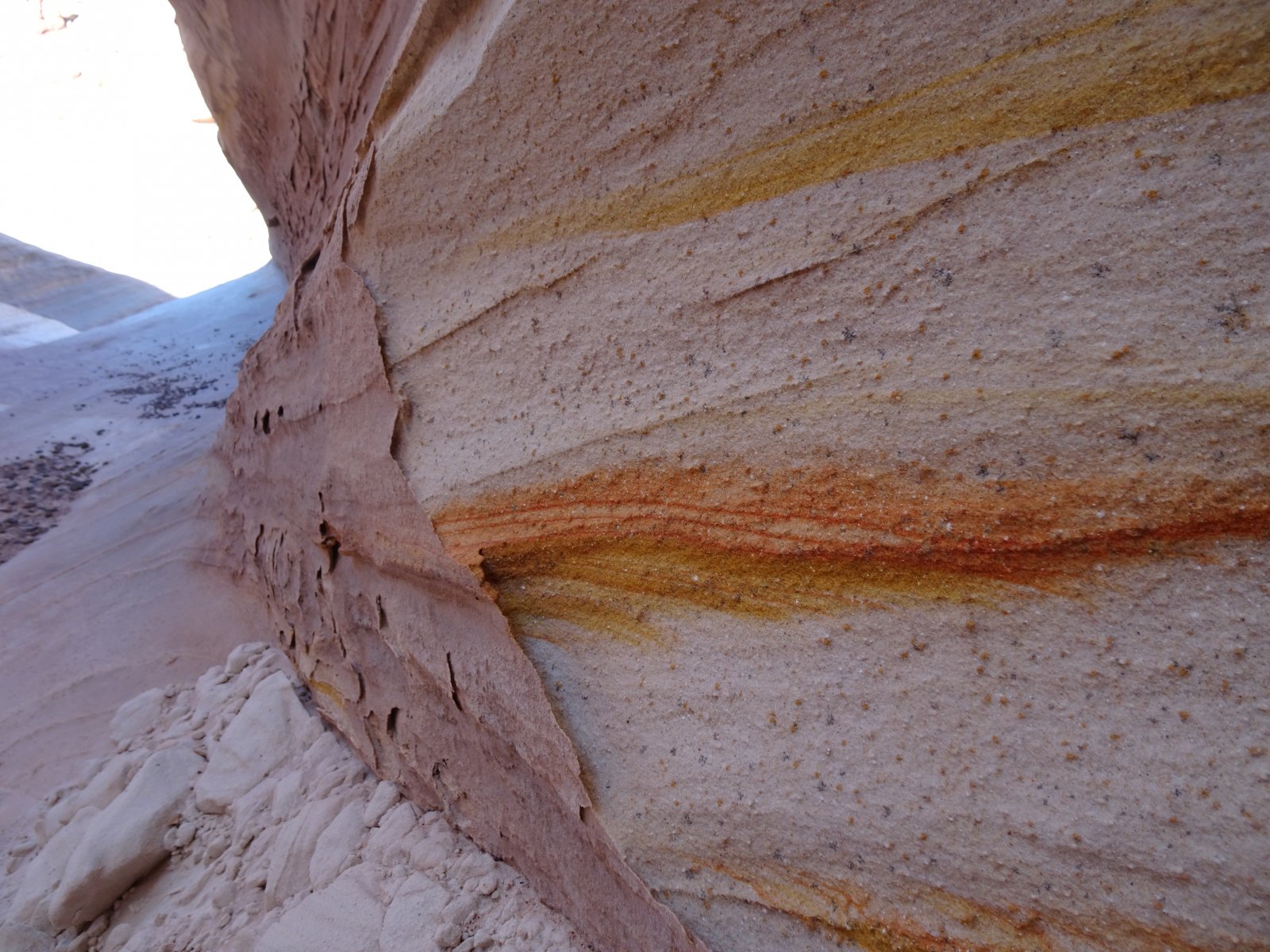 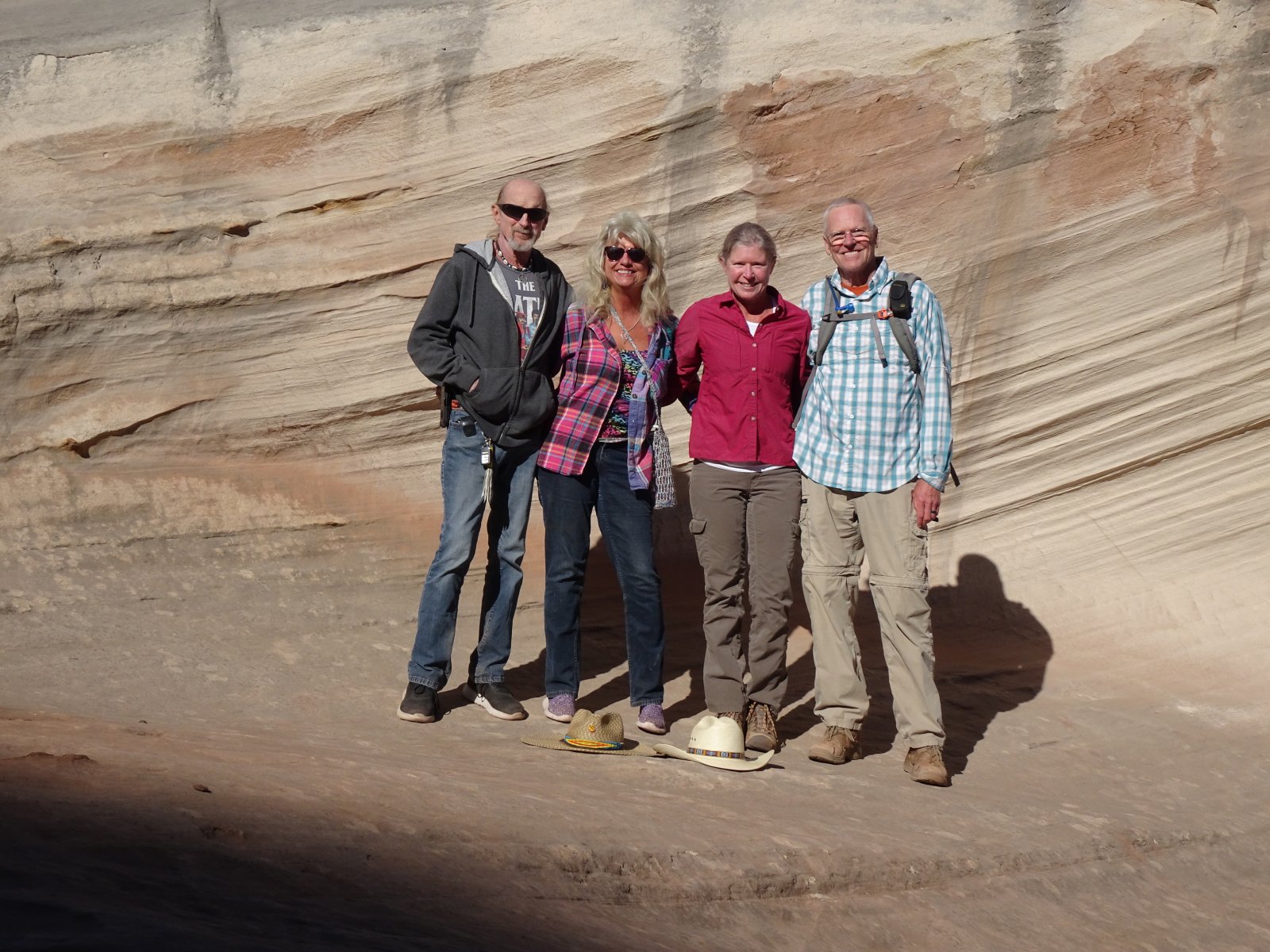 After saying goodbye to our departing friends, Blake and I struck out for Yellow Rock from the Lower Hackberry trailhead. But first off, let me say that I don't think I've ever been on such a wash-boardy road before. We've been up and down Cottonwood Road several times in the past, but it's never been like what we saw (and felt!).

Down in the wash the cottonwoods were in the process of turning bright yellow : 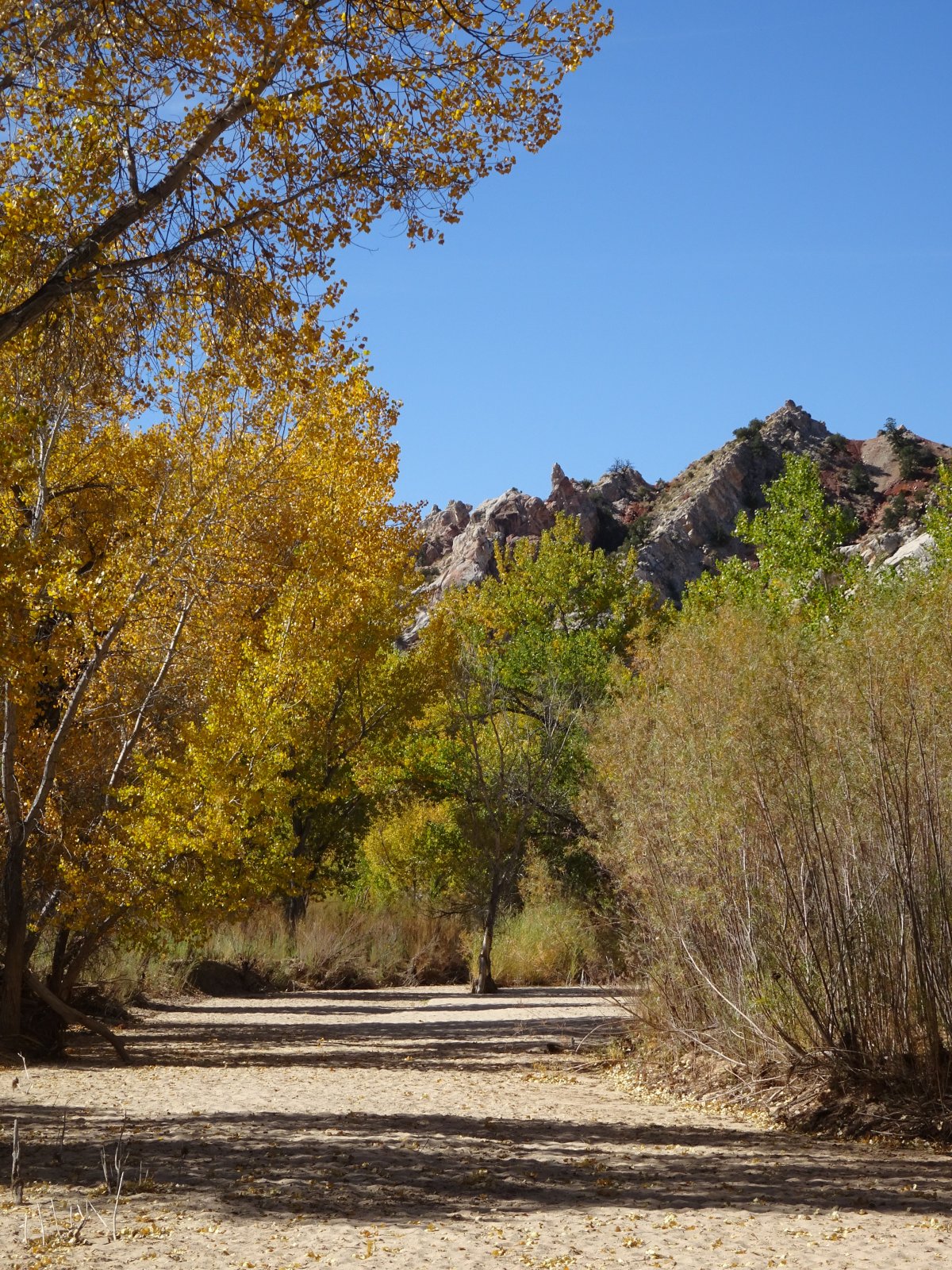 Looking down the steep climb up to where you can first see Yellow Rock : 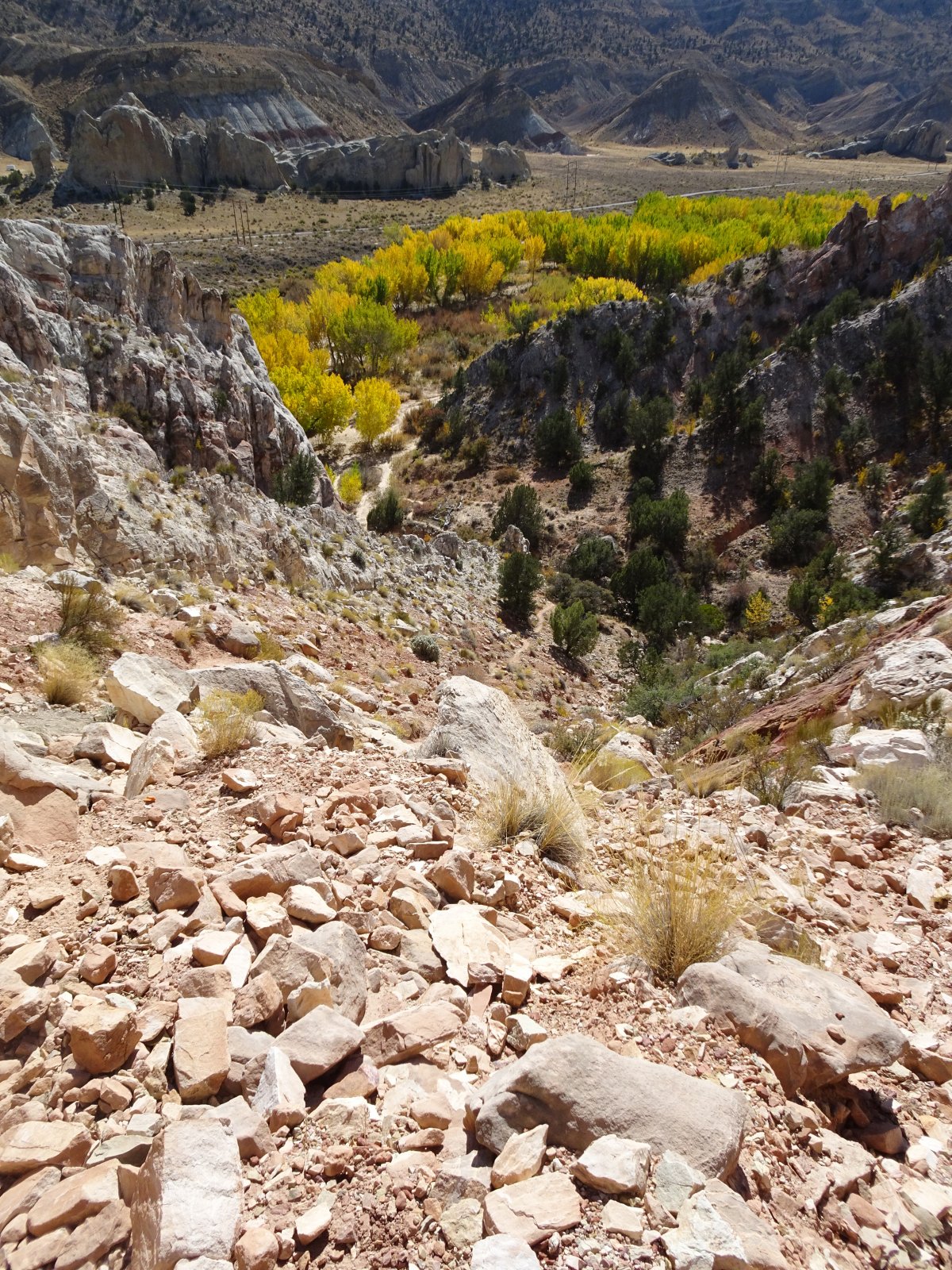 Yellow Rock in the distance : 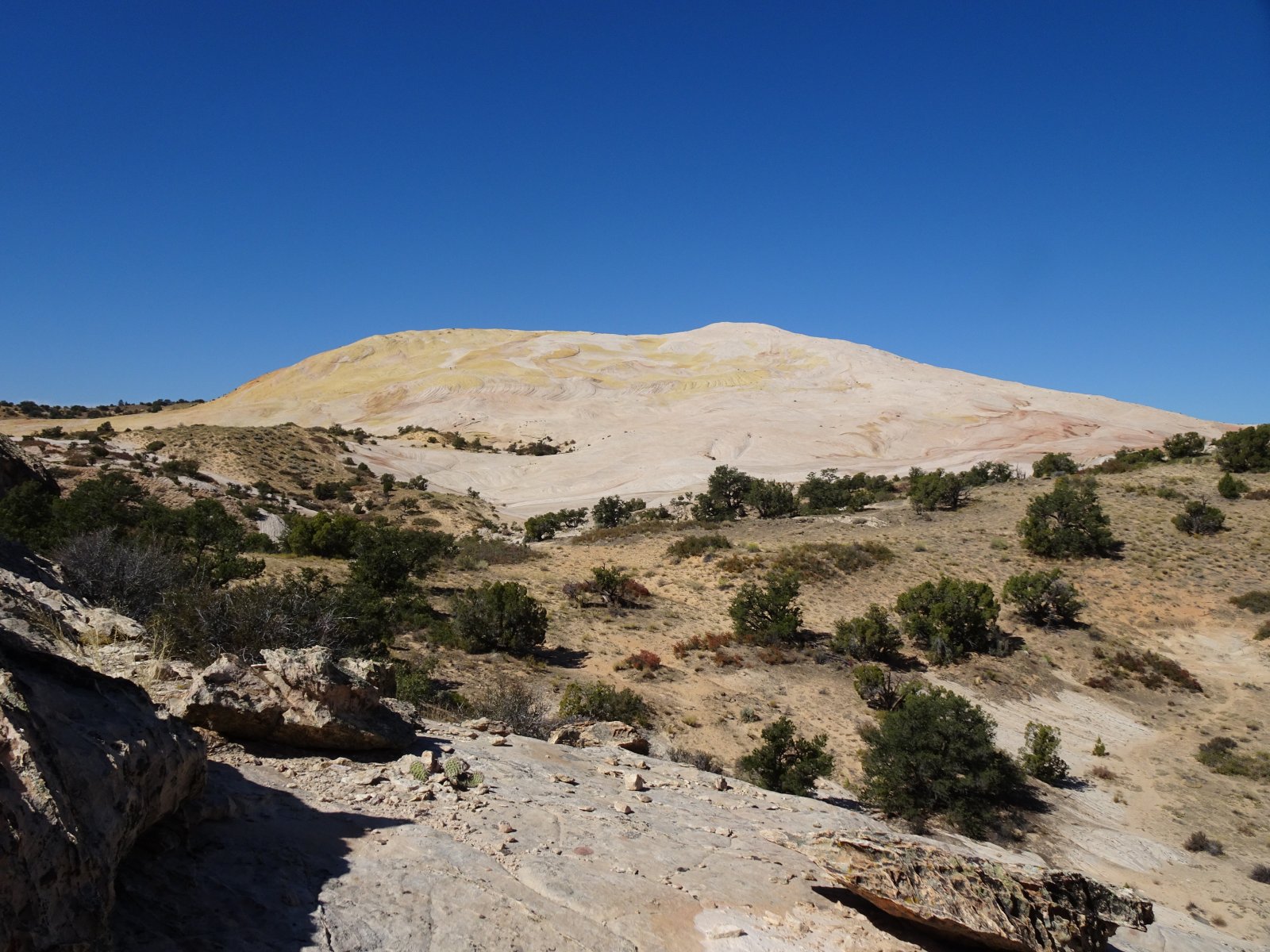 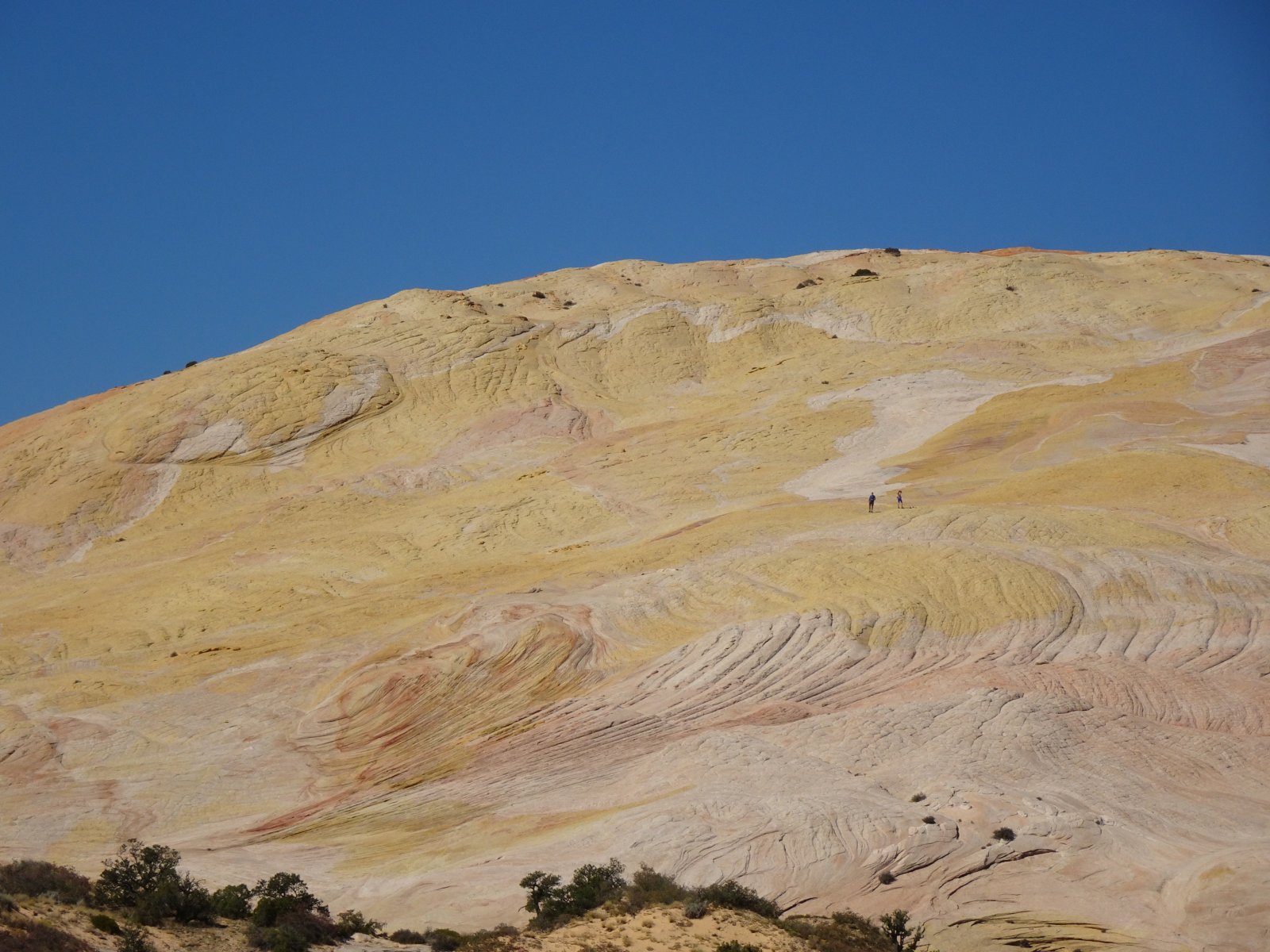 Blake and I took a break once we saw Yellow Rock and, frankly, weren't compelled to continue on. Not sure if it was the case of a let-down after seeing the Nautilus or if our expectations were set too high or what. Oh well. Back down the trail we went, all the while trying to remember if Click and Clack the Tappet Brothers recommended speeding up or slowing down to attain a sine-wave harmony with a washboard road. Jury's still out. Click and Clack's Washboard Debate

All in all, we had a grand time with our friends and enjoyed the ruins-hunting that we were able to fit in. Much to Blake's dismay, though, high winds and freezing temps caused us to scrap the fly-fishing and therefore I was "off the hook", so to speak.

Thanks for sharing, there is so (!) much to see around the Arizona strip. We also saw the ‘surprise’ pictographs last year. Glad to hear you had a great time with your friends. We love listening to Car talk and it always makes me happy.
We had very little washboards on Cottonwood rd end of last year. Maybe it was just graded back then after all the mid October rain which washed out several sections.

By the way- we might have seen Blake today driving through Grand Junction.... could that be right?

Titans said:
Thanks for sharing, there is so (!) much to see around the Arizona strip. We also saw the ‘surprise’ pictographs last year. Glad to hear you had a great time with your friends. We love listening to Car talk and it always makes me happy.
We had very little washboards on Cottonwood rd end of last year. Maybe it was just graded back then after all the mid October rain which washed out several sections.

By the way- we might have seen Blake today driving through Grand Junction.... could that be right?
Click to expand...

If you saw our tan FJ, then that would have been me.
You must log in or register to reply here.
Similar threads