Hello everyone,
So this is a trip I did back in January 2014. Since I'm new to backcountrypost.com, I thought I'd use this as good practice for teaching myself how to post trip reports on this forum. I did this trip during an especially dry winter in 2014 where the south rim hadn't received significant snow yet at the time of the hike (as you'll see in pictures). Thus, I suspect that the water sources I found and will describe are fairly reliable and present during most dry years - even now.

This part of the canyon is gorgeous. It has a remoteness to it that most other south rim trails lack, while still having a fairly well cairned trail to follow. However, the NPS trail description for this route is spot on - there are about a 'million ways for you to sprain an ankle or worse' on this trip. Lots of class 2 scrambling, a fair amount of slightly exposed class 3 scrambling, and of course the rappel down to Toltec beach. Even if travelling with someone, I highly recommend bringing a sat phone/emergency beacon for this route - it can be 2+ days to get back to the trailhead, then a very long walk back to the village if your car gets stuck. In fact the crux of the trip may have been getting my car to the trailhead. When I drove Pasture Wash, there were 2+ft deep ruts in many places - falling into them while driving would have ended my trip quick. I suspect that the road is not much better even now, esp. in winter after the summer monsoons.

After getting my permit in the morning (I applied for and picked up my permit on the spot - backcountry use areas are more available in January), I ended up reaching the South Bass Trailhead in the afternoon and made a dry camp down on Darwin Plateau. Mt Huethawali from my campsite looked stunning: 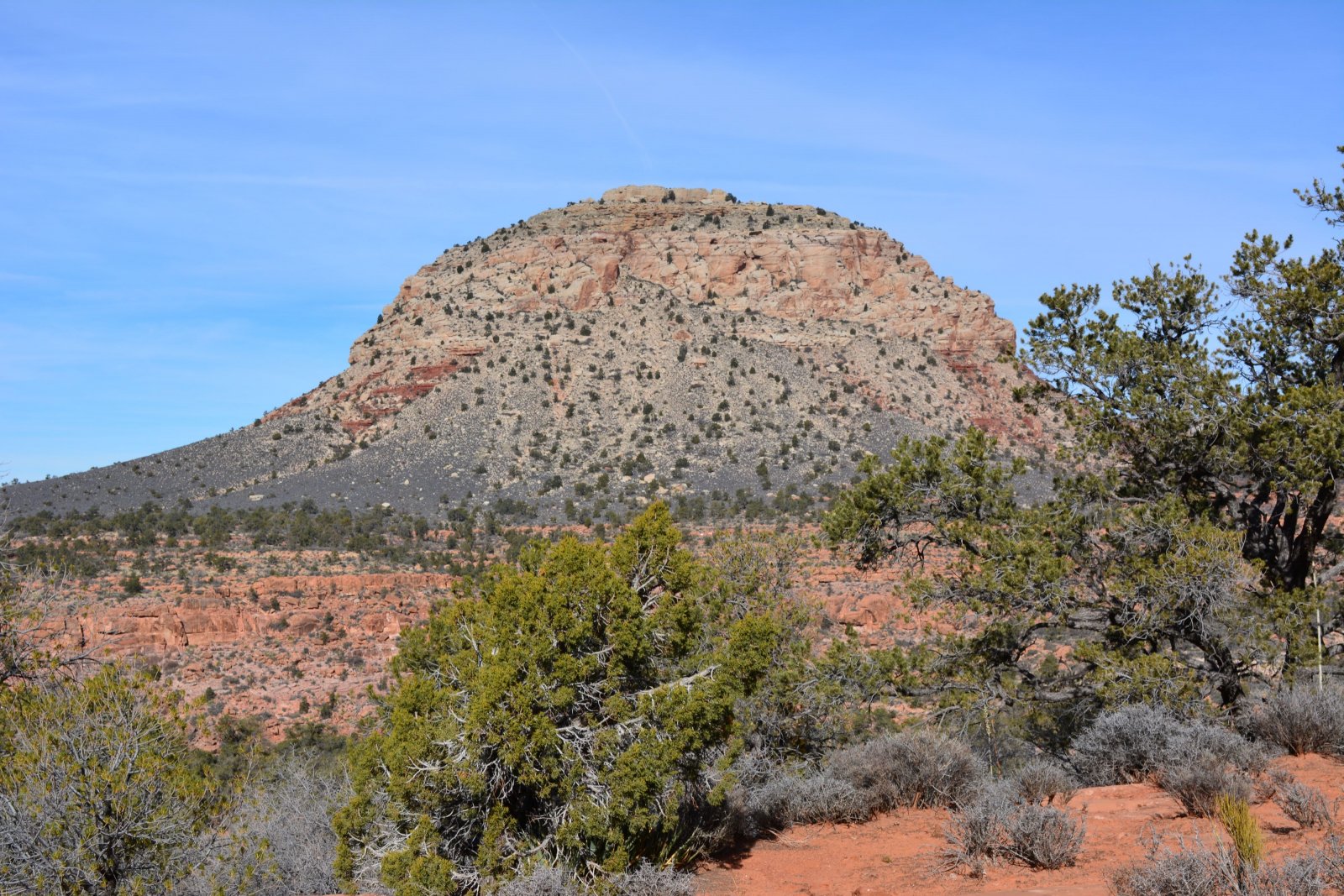 The next day was long, challenging, and completely dry until I reached Aztec Amphitheater. It was an easy walk along Drummond Plateau, but there was one long difficult section of trail as you rounded Toltec Point - lots of gullies, talus, and loose footing. There was a spring uphill from the trail here, but in January it was completely frozen over. Still, I managed to snap this awesome picture of Explorers Monument: 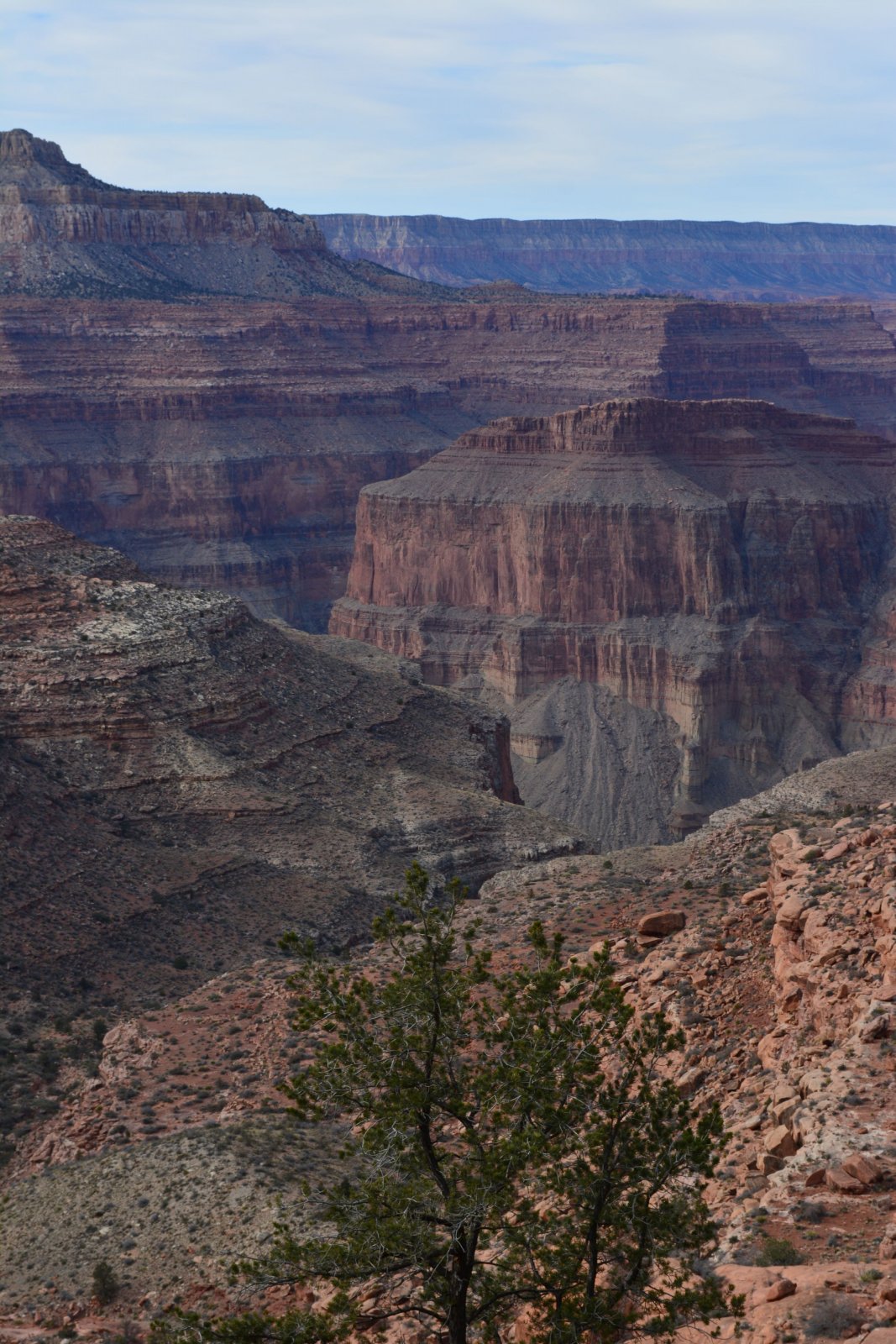 After you round Montezuma Point, the trail drops into a shallow wash which you follow into Royal Arch gorge. After about a half mile of walking along the bottom of the wash, keep an eye out for a small pothole in the middle of the wash nestled between some large boulders at about the 4500 ft contour. The pothole was only about 1ft wide, but several feet deep and full of water when I was there. Unlike other potholes I came across in this wash, this one wasn't frozen because it was so deep. Since it is somewhat shaded as well, I suspect it holds water when other potholes run dry. I thankfully found this water source just as it was getting dark, so I quickly set up camp right there for the night.

The next day I continued down the wash. Past my camp, the wash opens up a bit. I found a few more shallow water potholes that were beginning to defrost in the morning sun. I suggest tanking up here as it was several hours of difficult hiking before I ran into my next water source in the gorge. Right before you reach the main gorge, there is a huge drop-off that you have to negotiate.

The NPS guide describe two ways to bypass this drop. I strongly recommend following the route that goes downcanyon right of this pouroff. You have to negotiate some class 2+ downclimbs through the Supai cliff bands on the right side. The downcanyon left bypass was not visible from the pouroff, however from a vantage point further down canyon it looked pretty sketchy and dangerous - again, twisting or breaking your ankle here would be really bad.

The NPS route description led me to believe that there would be plenty of water in the main Royal Arch gorge, but this was not the case for me during this dry winter. I found only one accessible water source - about half-way down the gorge before the exit to Toltec beach. Thankfully, it is right on the cairned route, kind of under this large boulder that you climb down. Again, unlike other potholes in the gorge that I passed that were out in the open, this one was more shaded, so I suspect it keeps water longer. I camped about 40 min past this water source near where the route exits the gorge towards the direction of the rappel and Toltec beach: 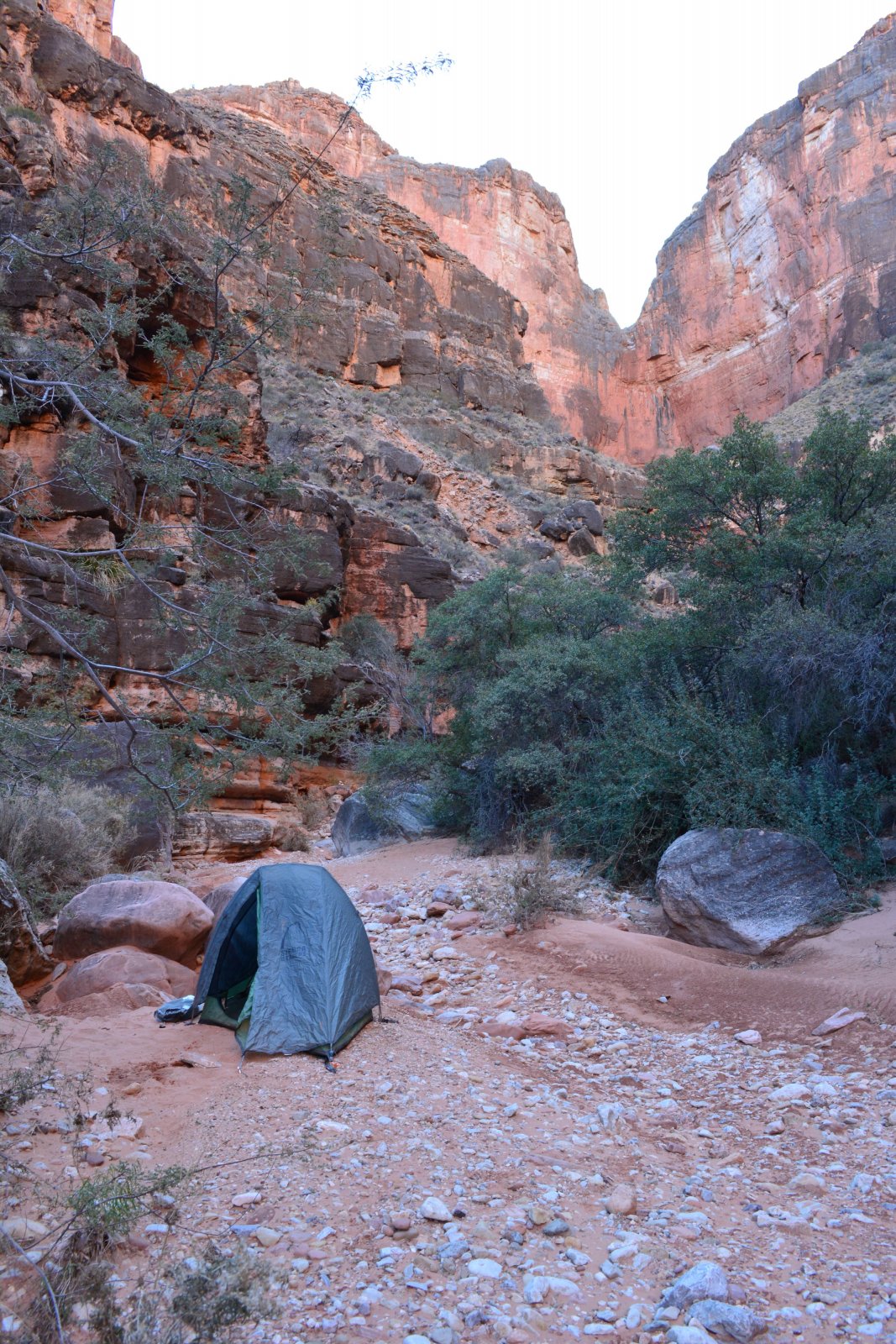 As you can see, the main gorge is beautiful but rocky (this picture captures probably the most sand and one of the few camping spots that I saw in the gorge). Expect lots of class 2 and some class 3 scrambling down house size boulders in the middle of the gorge. I had to break out the 60 ft of rappel rope several times for lowering my pack.

The exit out of the gorge was well marked on my trip with two huge cairns. Expect more class 3 scrambling as you negotiate the steep exit. Unfortunately I didn't completely top off my water jugs at that single source in the gorge, so the next day I was pretty much out of water after breakfast. Thus by the time I got to the rappel (sorry, no picture), I was parched. The rappel is marked on the topo map as '20 ft'. However, what's not evident on the map is that the 20 ft rappel is located about 3/4 of the way down this 100 ft cliff that you have to navigate to via some moderately exposed class 2+ downclimbs and ledges (well cairned). Pretty exciting, especially with a large heavy pack on! The anchor is several interconnecting potholes or huecos in the cliff face that you can thread with webbing - bomber.

The river was a sight for sore eyes. Toltec Beach made an excellent, warm camp. At this point in the canyon, the Tapeats is right at river level - I took this cool pic near Toltec beach; 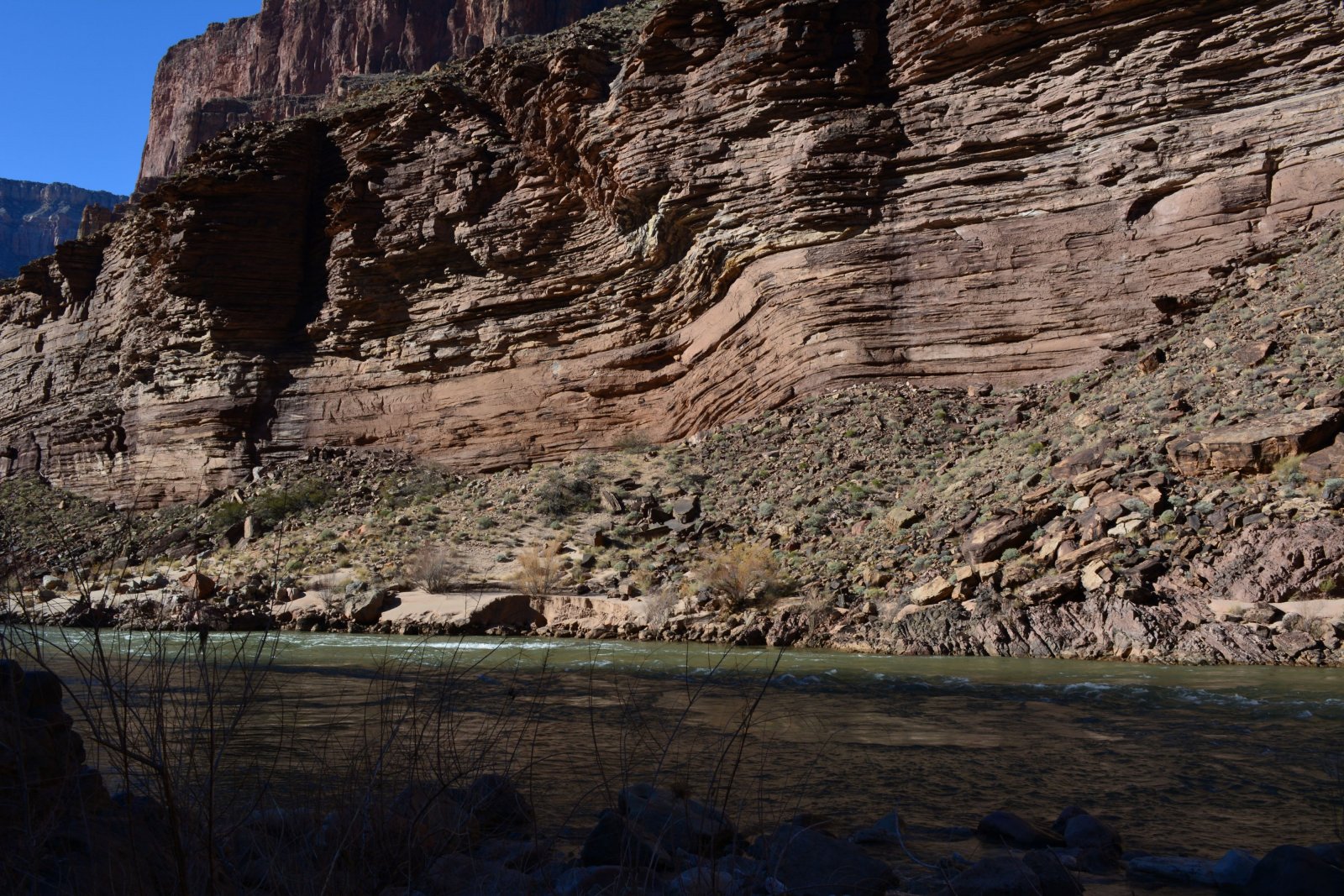 From Toltec it was about a two day hike back to the car via the Tonto and South Bass trails. Be sure to tank up on water here - the next reliable water that I found was on the South Bass trail at the Colorado river. You will likely see water in or near Garnett canyon, but it is super briny and undrinkable. Don't make the mistake I did, which was to contaminate half my water supply with this undrinkable briny stuff! Happy trails! 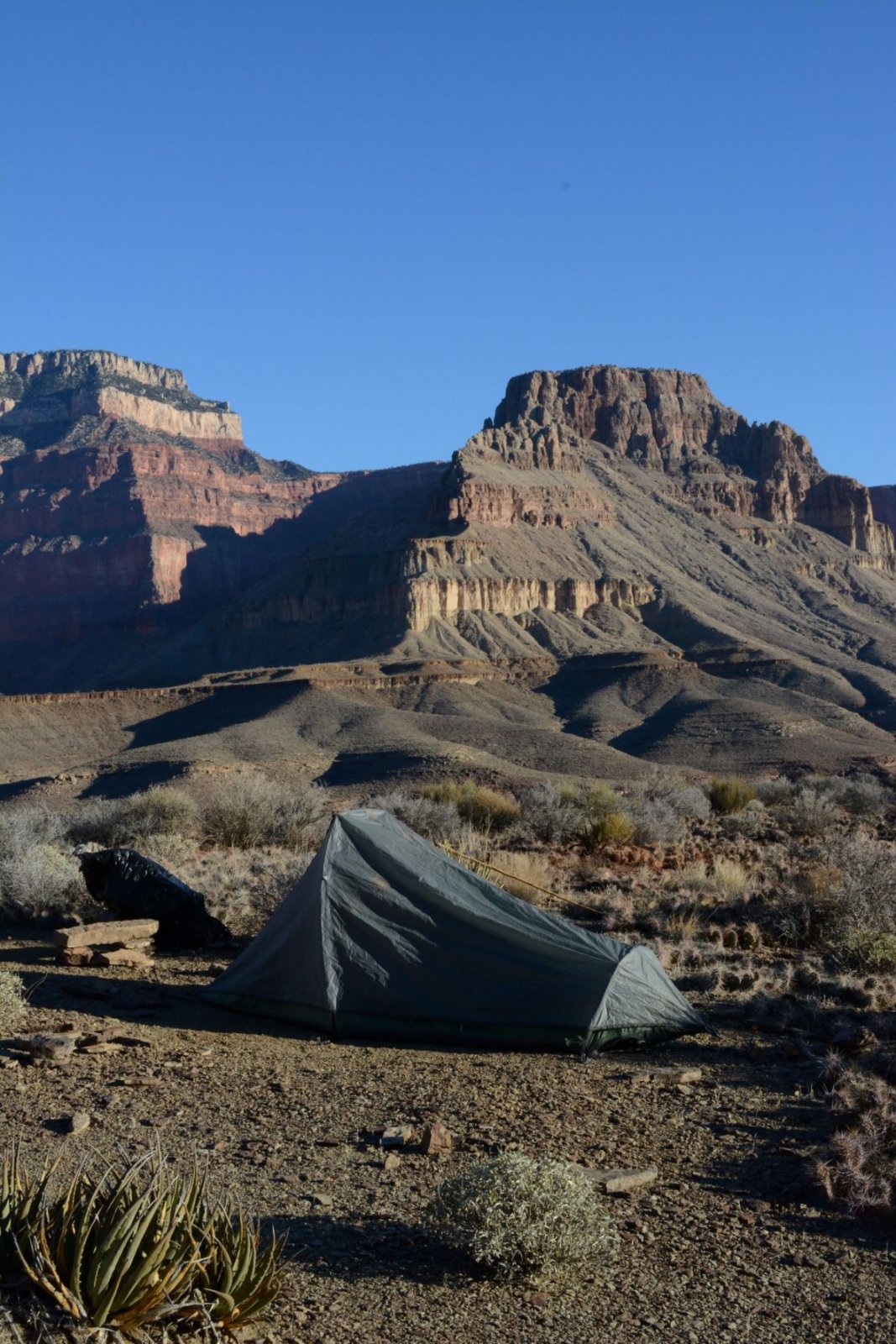