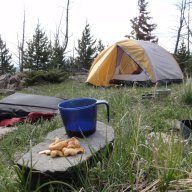 It's about a 10 mile roundtrip hike across Cedar Mesa, down into Grand Gulch, and up the gulch to the spectacular Big Man Pictographs. We've done it as a day trip, but it's worth spending as much time as you can exploring Grand Gulch. We only had one extra night on our recent trip, so we decided to hike the three miles across the mesa and find a camp near the rim of the gulch so that we could spend more time exploring the canyon without heavy packs. 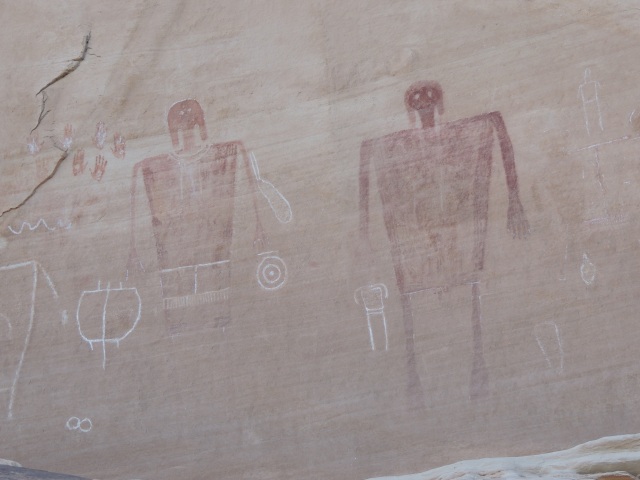 The Government Trail is one of the shortest and easiest access routes into Grand Gulch. The trail crosses the mesa top, and reaches the canyon rim after 2.7 miles, and then it's just about a 1/2 mile down to the bottom. 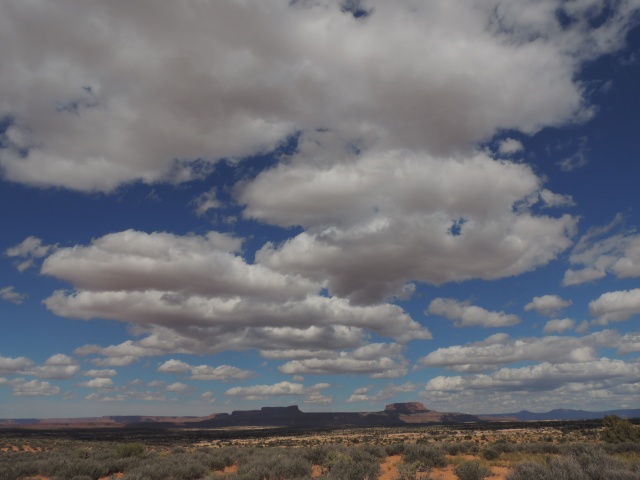 We reached the edge of the canyon, and met a couple of hikers on their way out who suggested a good campspot on a ledge about a third of the way down into the gulch. (Incidently, those were the only folks we saw for two days.) 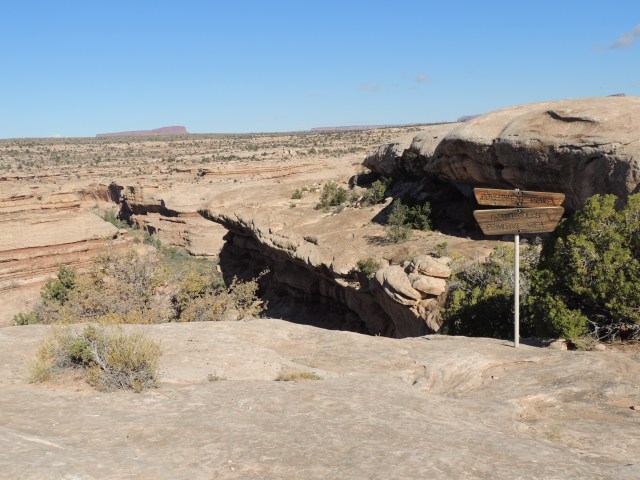 We took their advice, and hiked down, hunting for a good spot to pitch the tent. As we were wandering around we looked up and discovered some faded petroglyphs right above our chosen spot. 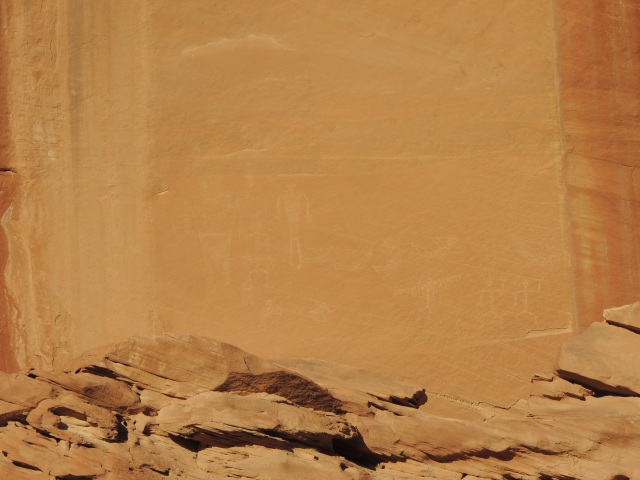 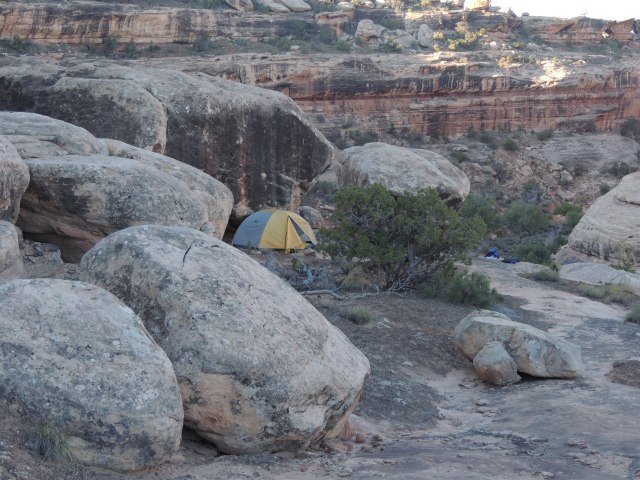 From our campsite we could see a ruin high on the cliff on the other side of the gulch. Like nearly all the dwellings in the area, this one faces south, so it quickly gets the morning sun. The value of this was clear the next morning as I shivered in our shady spot and watched the sun quickly bathe the ruin across the way in warm light. 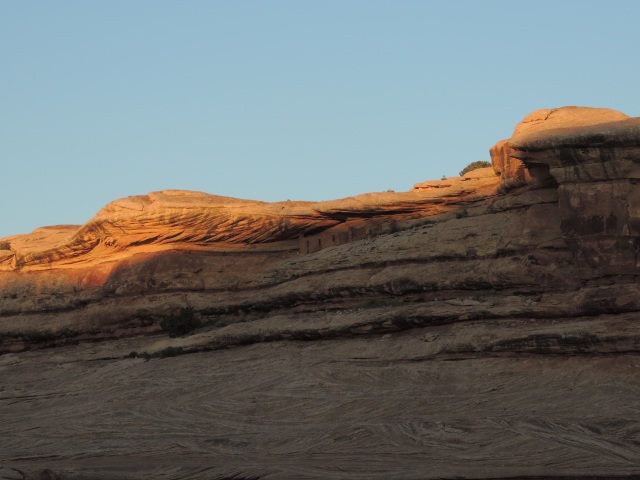 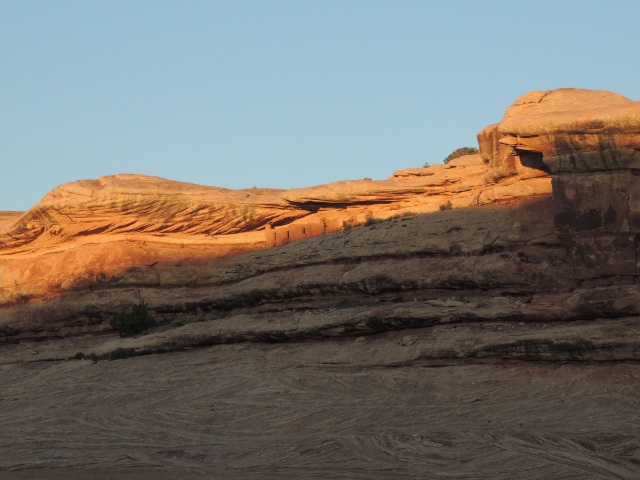 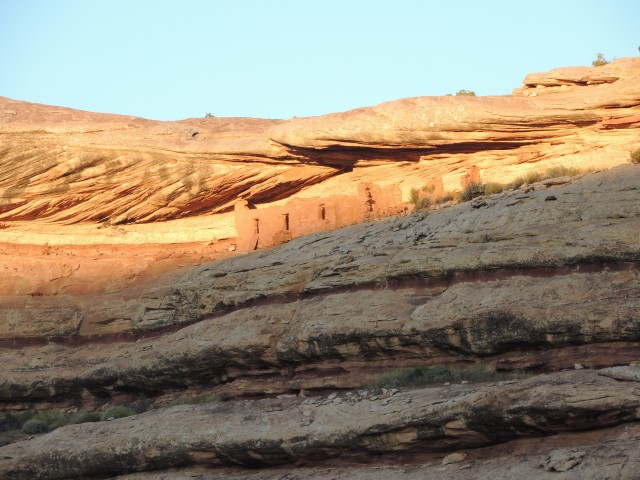 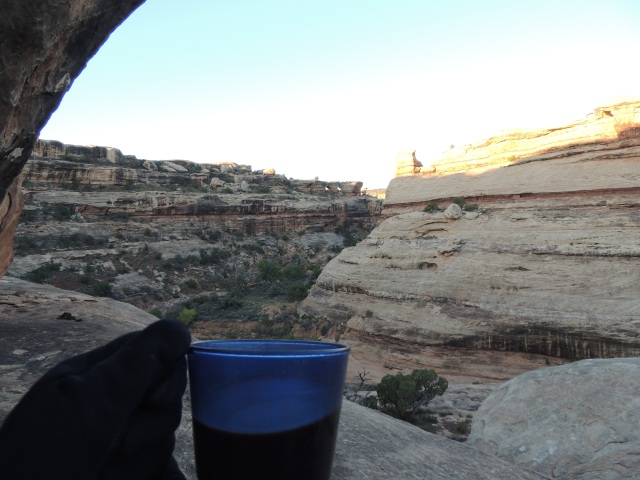 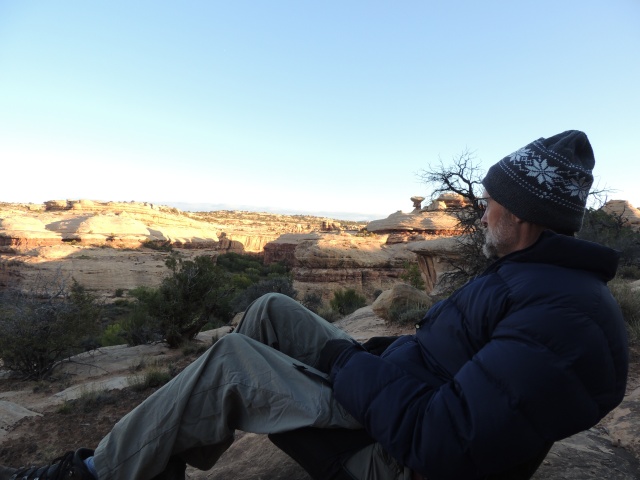 We set up camp and headed up canyon to find them before it got dark. They're a couple of miles up the canyon from the spot where the Government Trail hits the gulch. 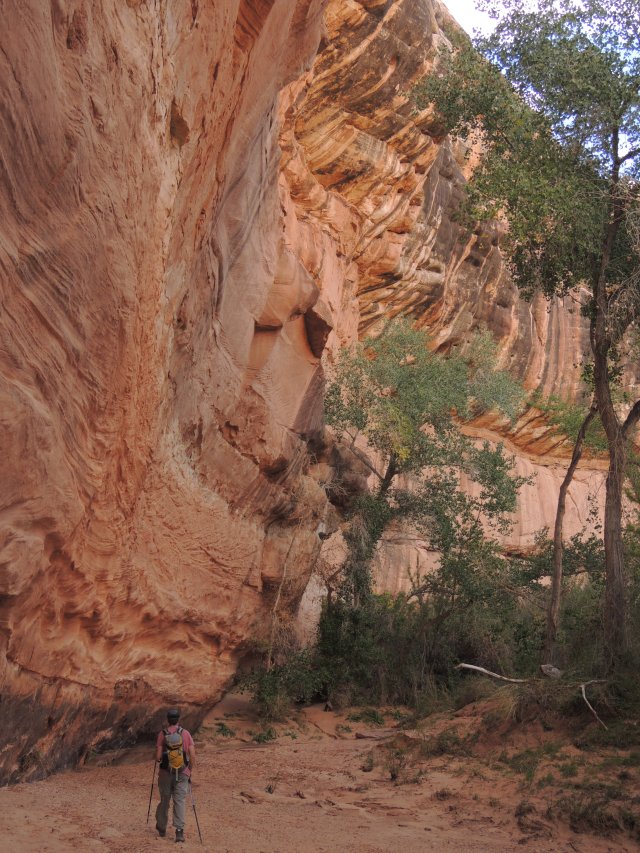 You can't see the pictographs from the trail, but you'll see other hikers' bootprints heading up to the right after a couple of miles. It's a pretty good scramble to the ledge where you'll find the pictographs. 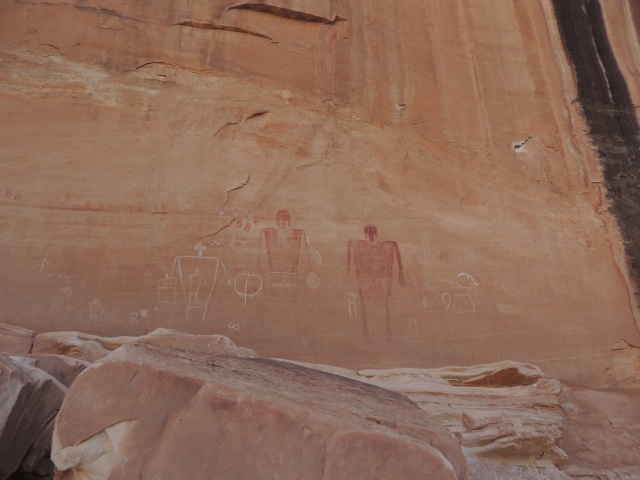 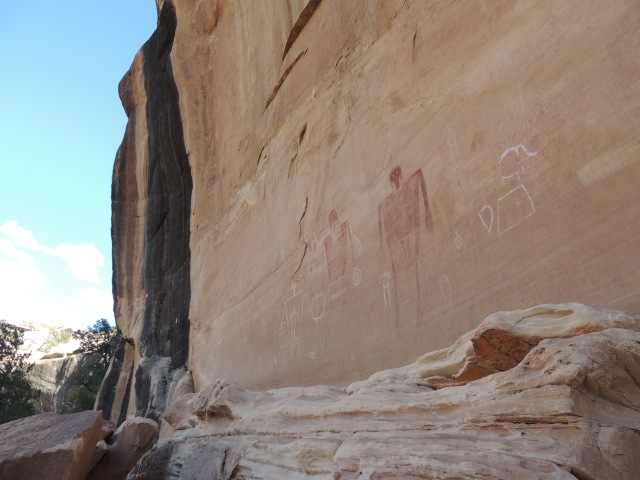 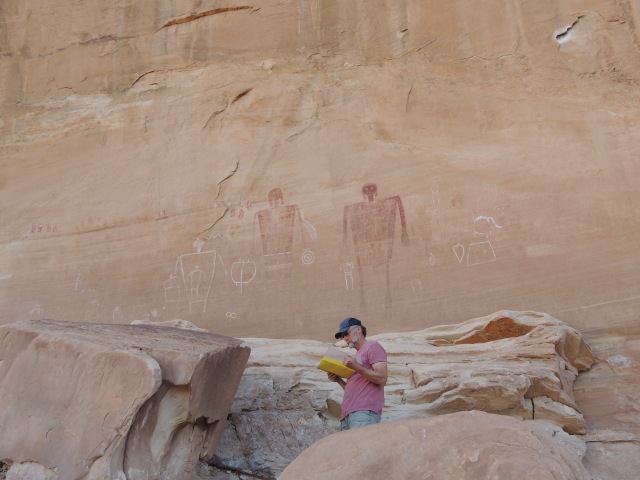 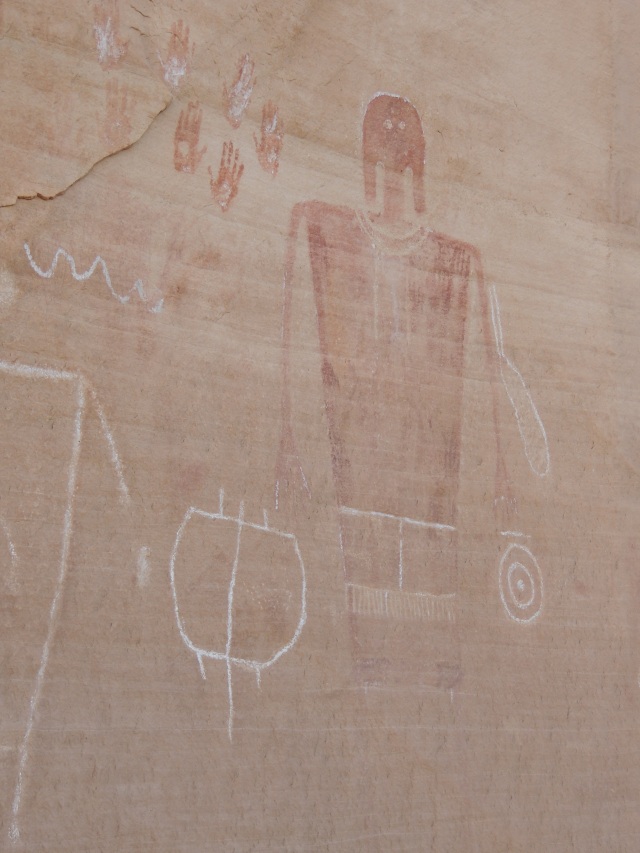 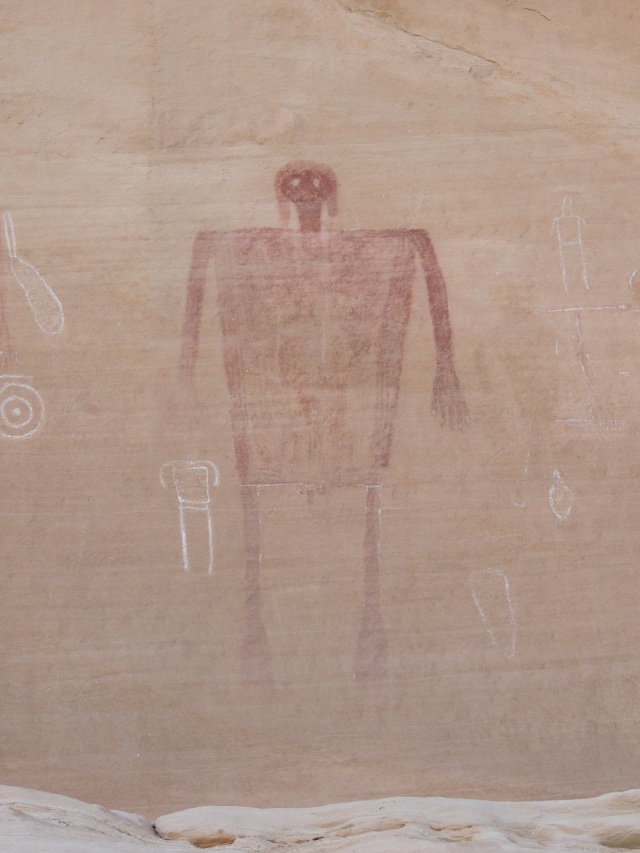 There's even an "official" BLM explanation of the panel tucked into an ammo box on the ledge: 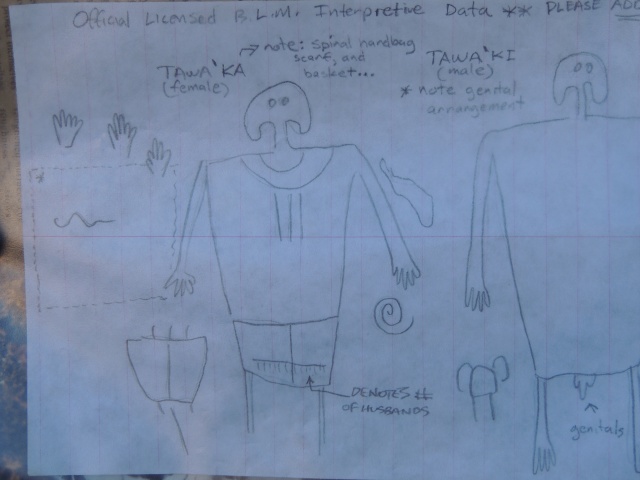 Whoever did this wanted to be sure we didn't miss the genitals. So take note, please.[/caption]

Here's the view the big man and woman have been looking at for hundreds of years: 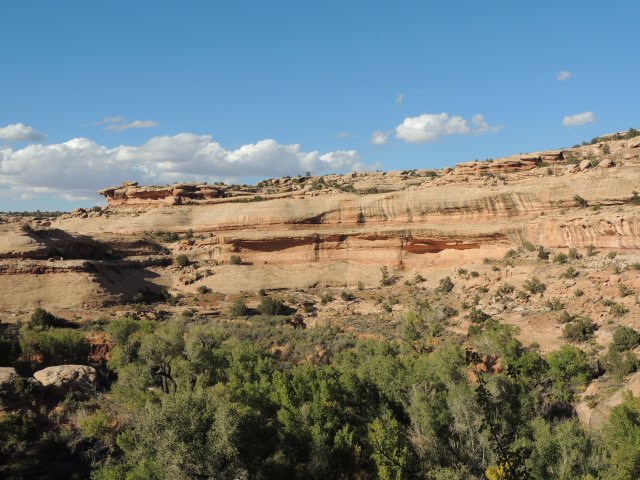 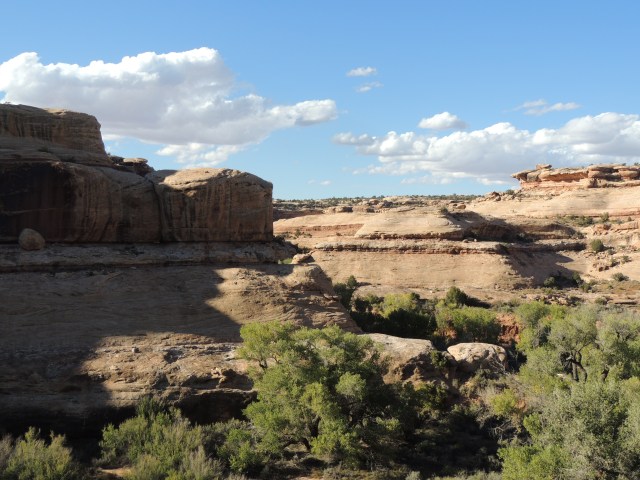 Another way in is to cut off into the head of Polly's Cyn. Nice ruin there and easy walk down to GG.
' Not All Who Wander Are Lost '

Went down government a couple of years back. Problem was it was early June and was hot with little water and what we found was not very good tasting so we came out early.

Eugene said:
Went down government a couple of years back. Problem was it was early June and was hot with little water and what we found was not very good tasting so we came out early.
Click to expand...

Water is always the crux in Grand Gulch, that's for sure. We've come out early on some trips, too.
You must log in or register to reply here.
Similar threads