As spring break plans were postponed and canned, my daughter wanted to get out.
You would like a combination of a little misery and the chance to smile!?
Glad to oblige!

I slipped away from emails and meetings from home to pack and we were on our way in the middle of the afternoon. While we were limited in geography, one of the good things is that with snow you can camp more easily anywhere you want to stomp or dig out a spot. So off we went.

The temps were 50-60s. The snow was slush. Postholing happens.
As does slipping with every other step.
I held off on putting on shoes or spikes, but postholing up to my knee while on the trail for some uncounted time. We put them on.

My daughter would say that the first 2 miles felt like 4, and she was lagging as we hit the junction. 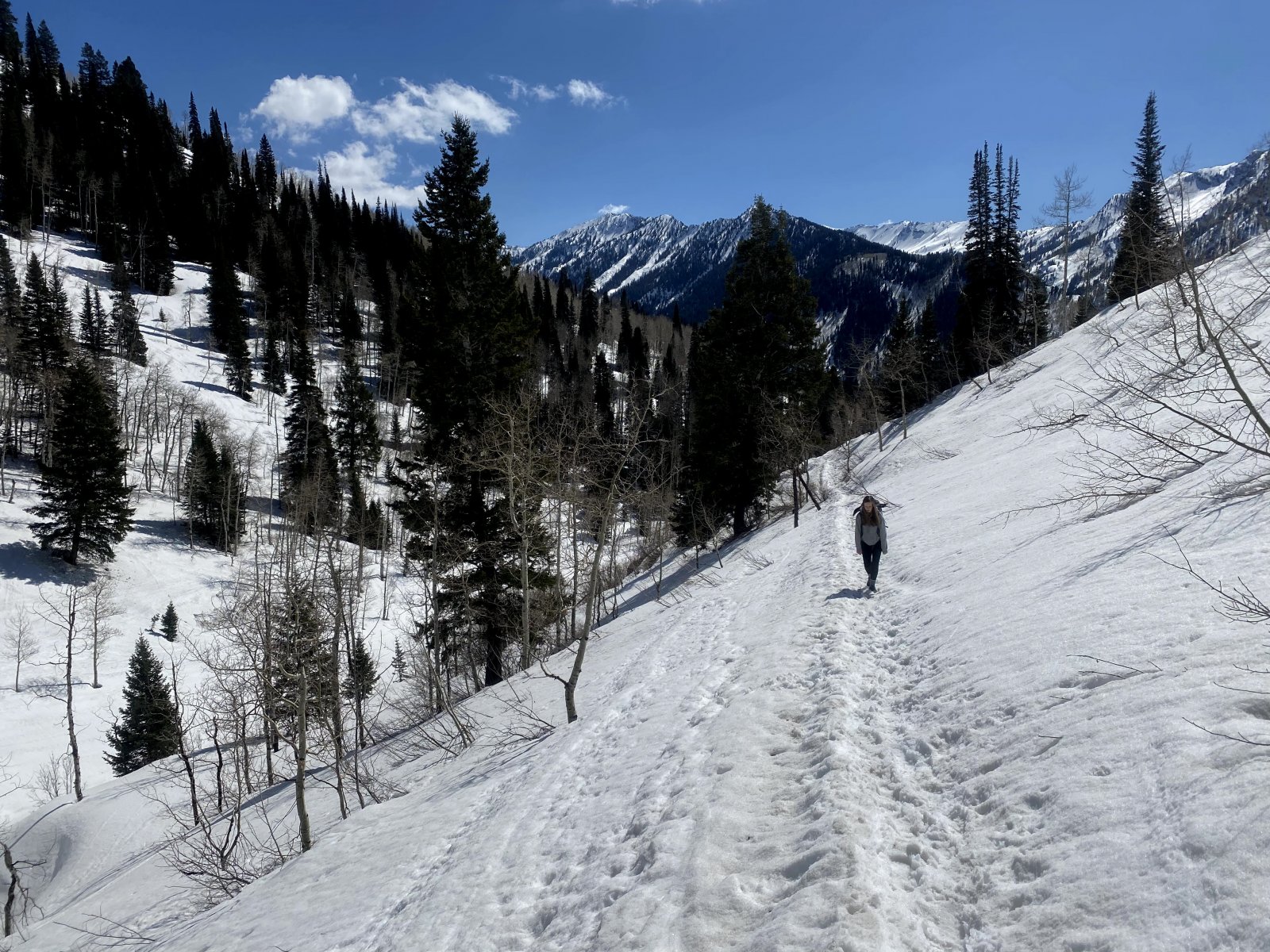 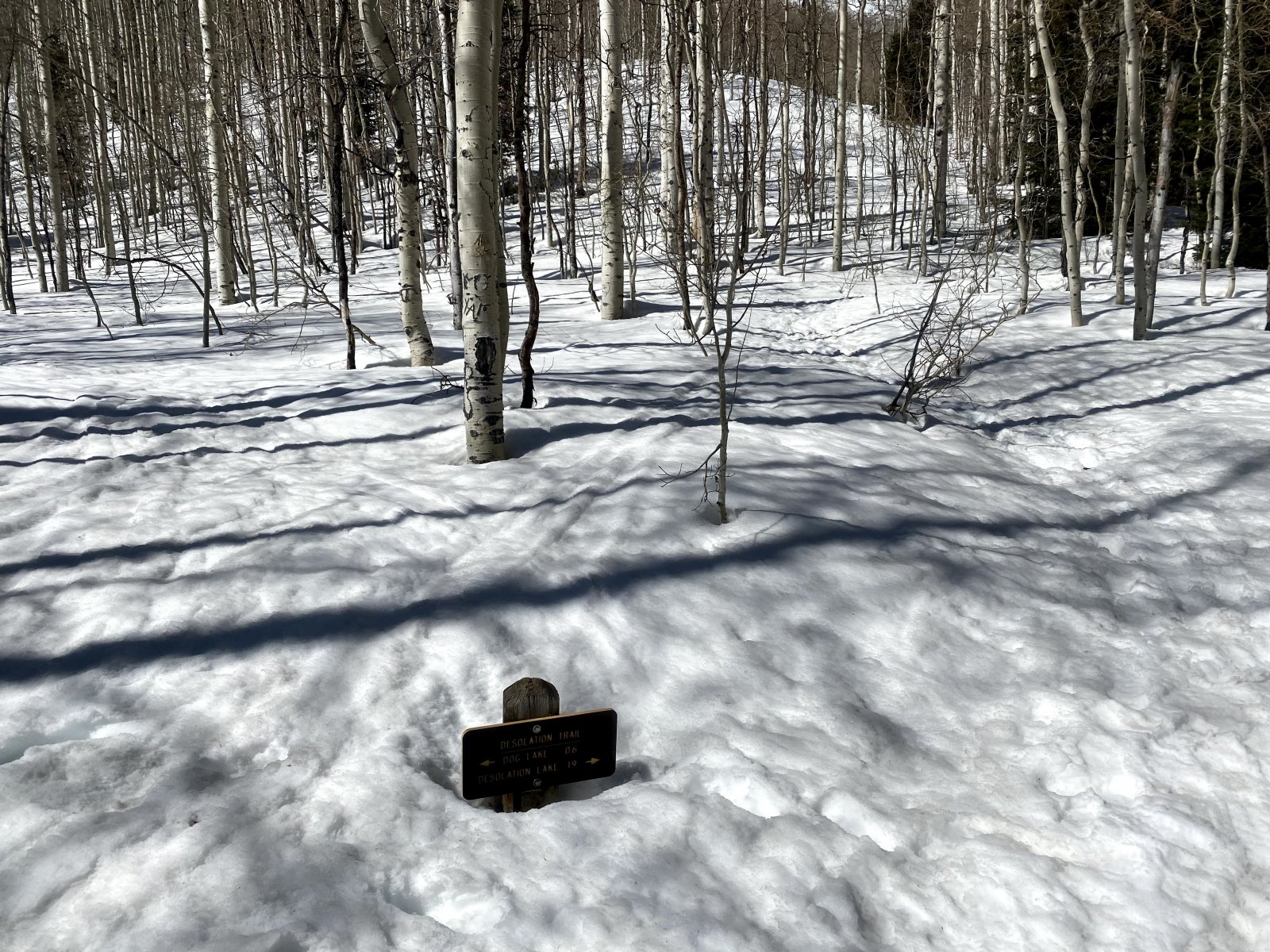 We took a rest and ate a snack. Then on we went. 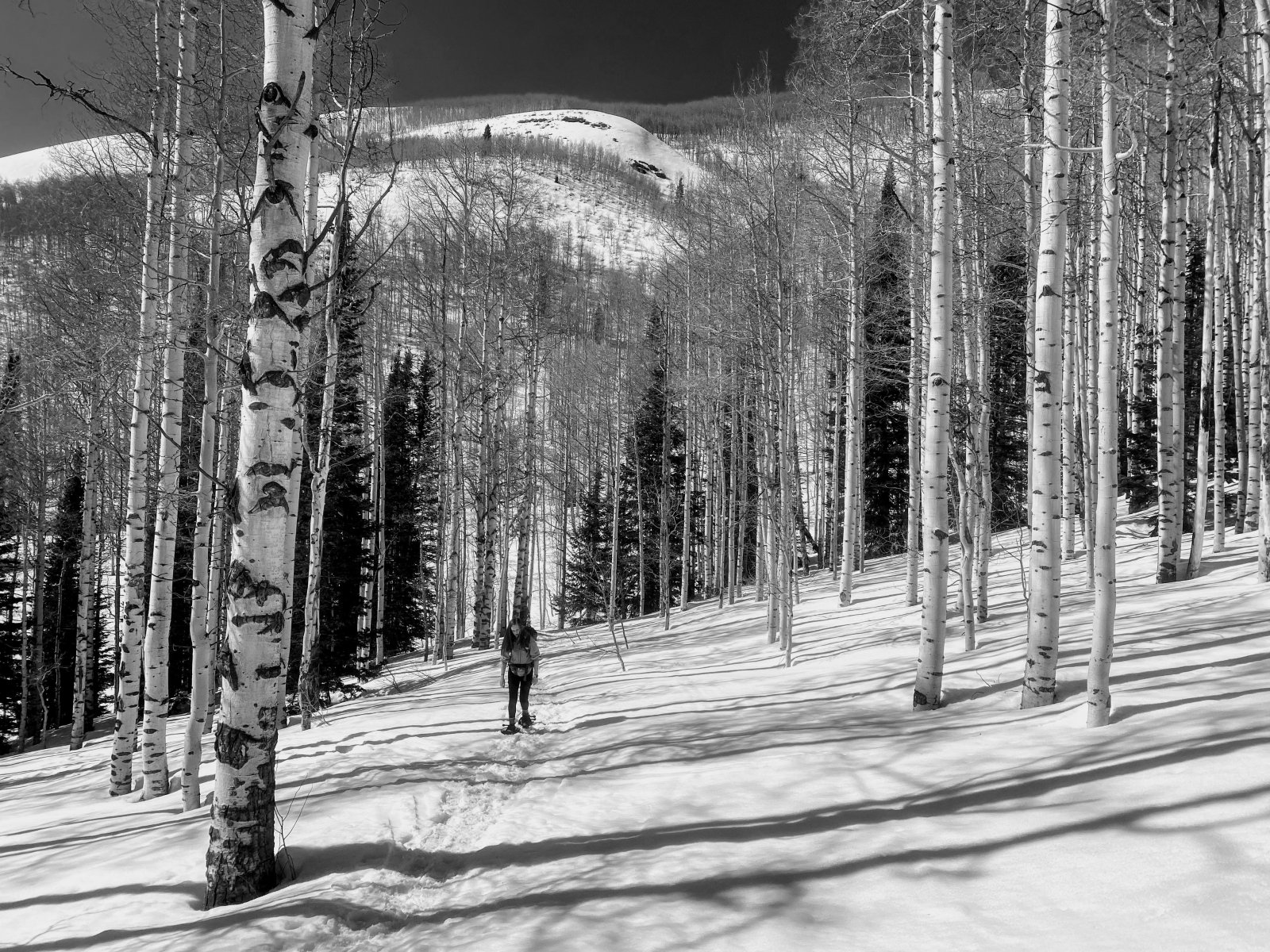 We left the trail to avoid a steeper cut that I knew was there on the actual trail and a potential for sunny sloughing, and we cut through the ravine instead. 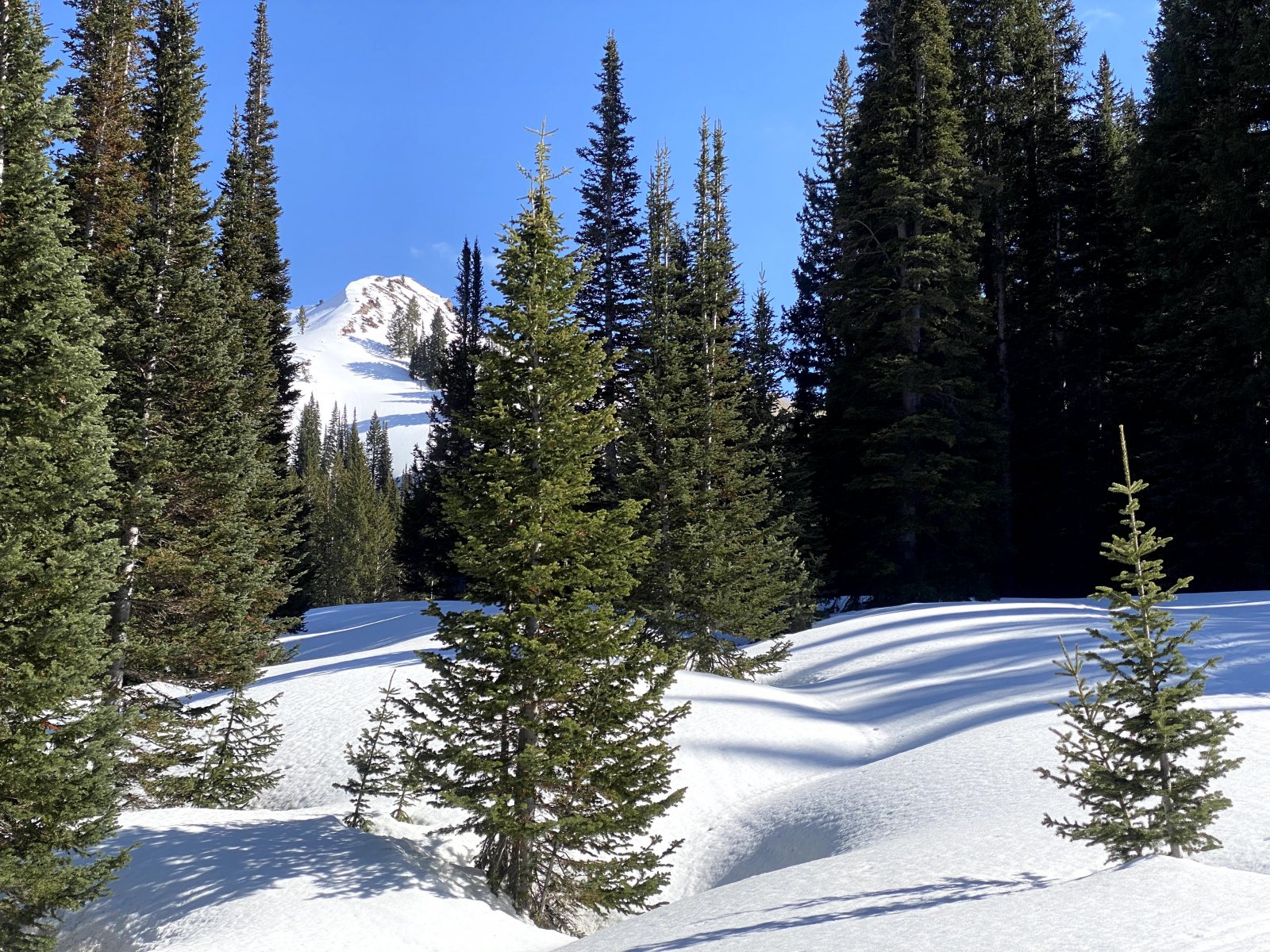 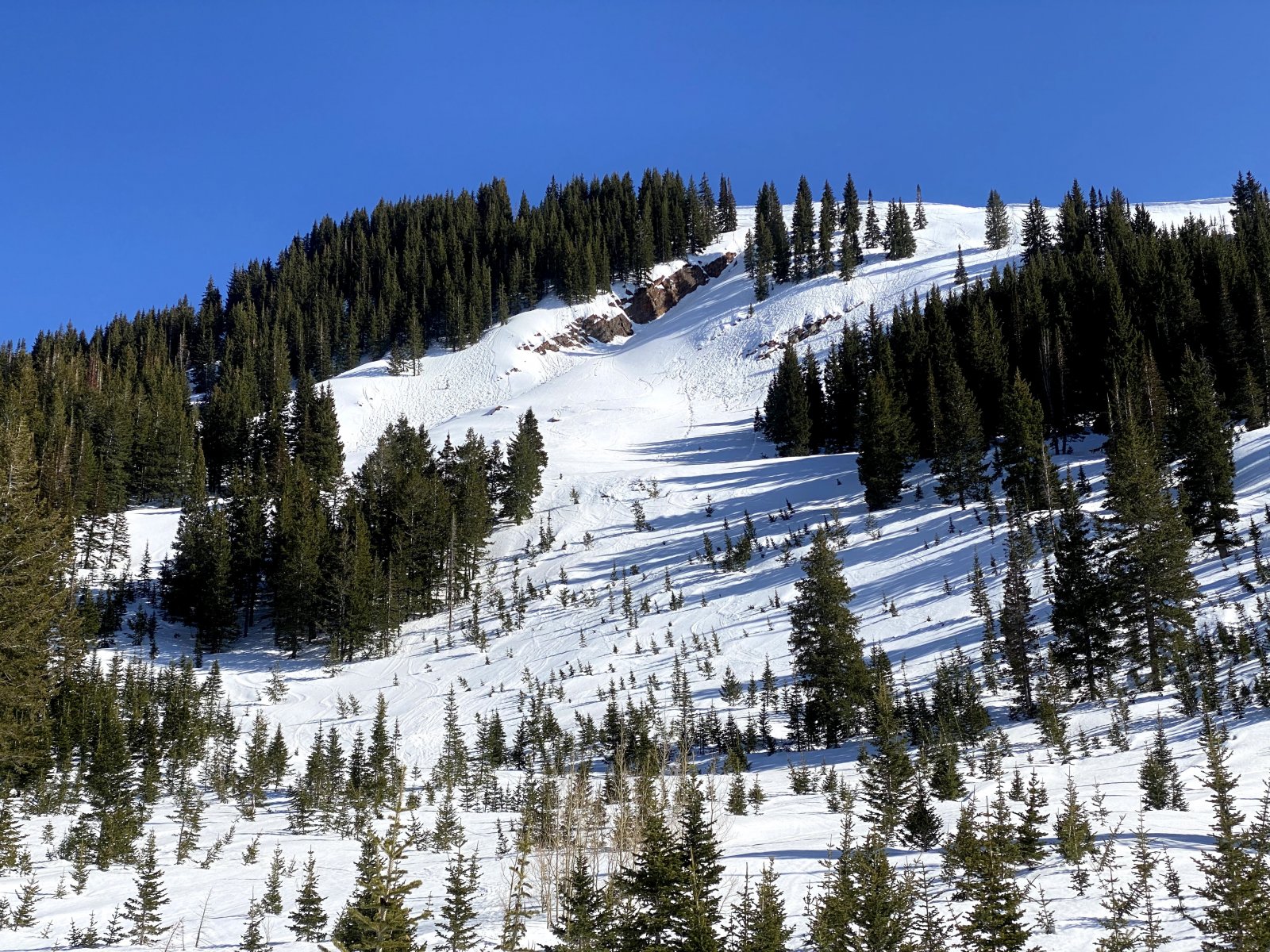 Finally near mile 4, after convincing my daughter we had less than 10 minutes of hiking left and just one last climb.
We made it.
I was right. 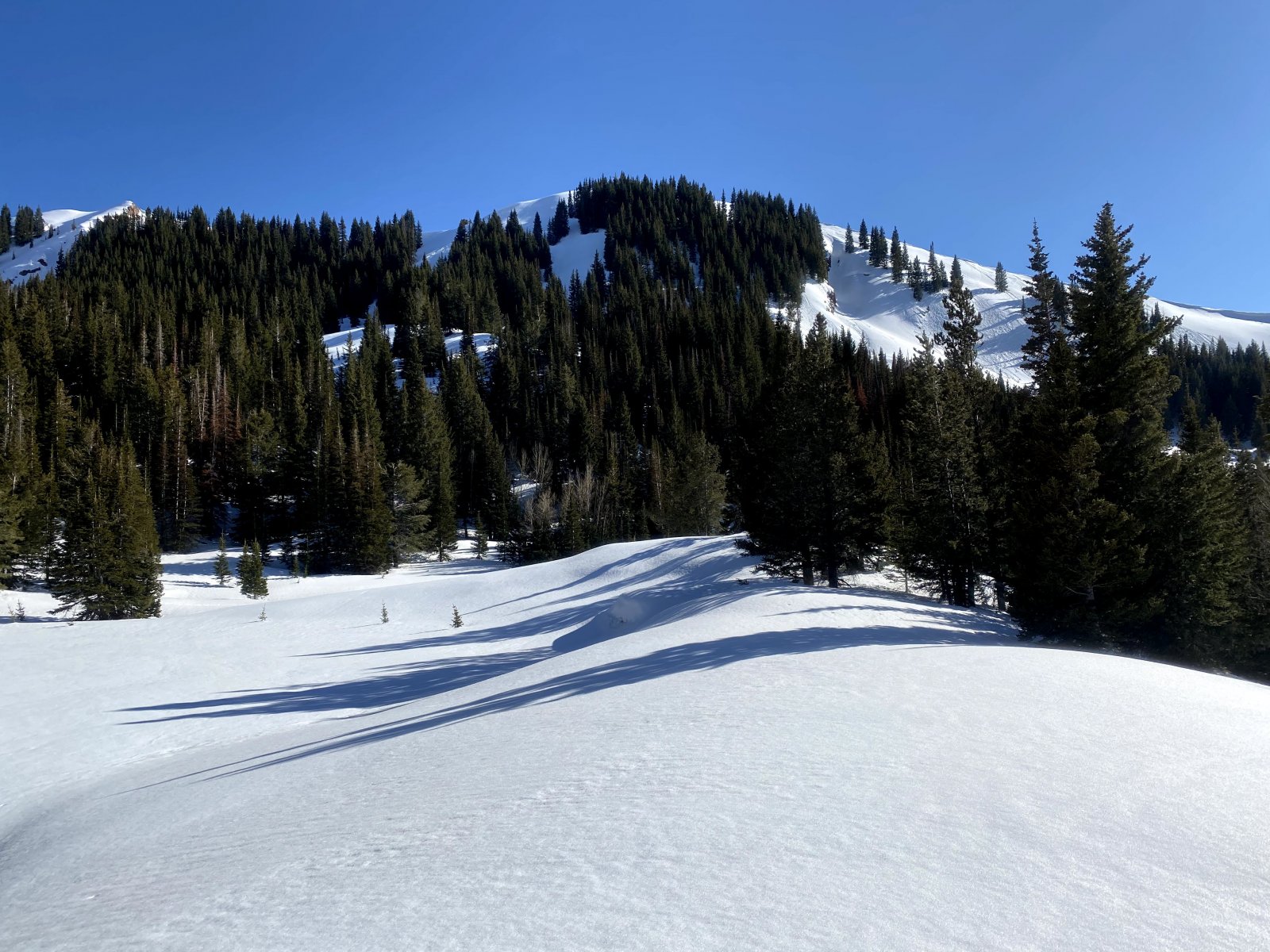 We could have been on the trail with shoes and just random potholing, but the slurpee snow was out in earnest. So shoes were better.

It has its own kind of beauty. Not exactly awe inspiring, but gentle rolls, golden trunks of aspen, and several different evergreen species. 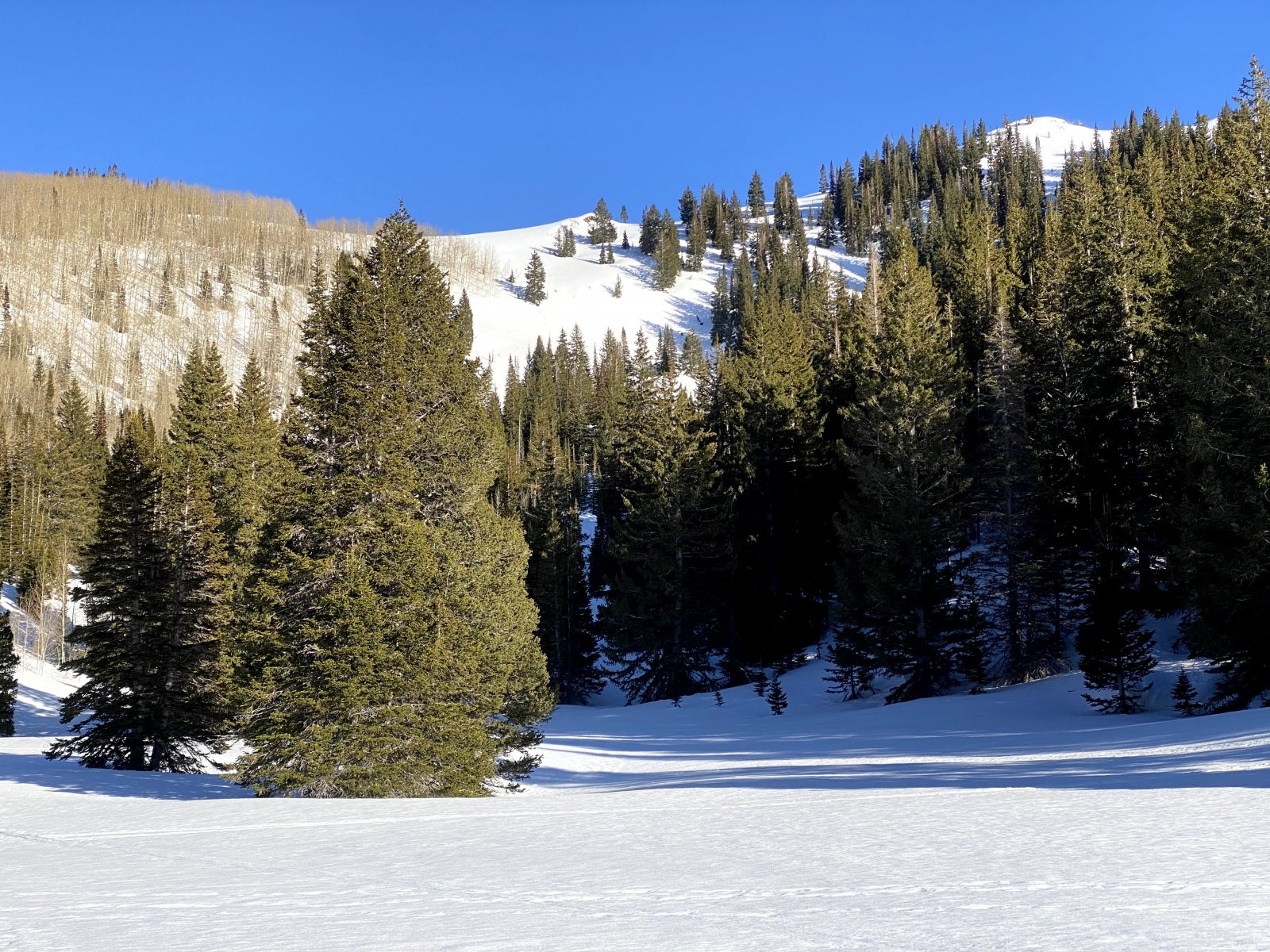 We had seen no one since the junction. That's isolation.
I showed my daughter some of the ins and outs of snow camping as we stomped out a spot and setup shelter.
She was tired, but only a bit ornery and cold as the shadows spread over us. So I worked fast.
Everything takes longer in the cold and on snow though.

She laid down, while I enjoyed watching the golden light slip away and the shadows lengthen and darken.
Dinner was simple ramen with some ham and salami sandwiches.
I even went and built her a little pit toilet in the snow with some aspen bark as a seat. Frontier living at its finest.

We talked a while until she went to sleep. EARLY. She was out by 830pm.
I lay there a while in the gathered silence. Far, far fewer airliners flew over (3 that I noticed), which was extra nice. 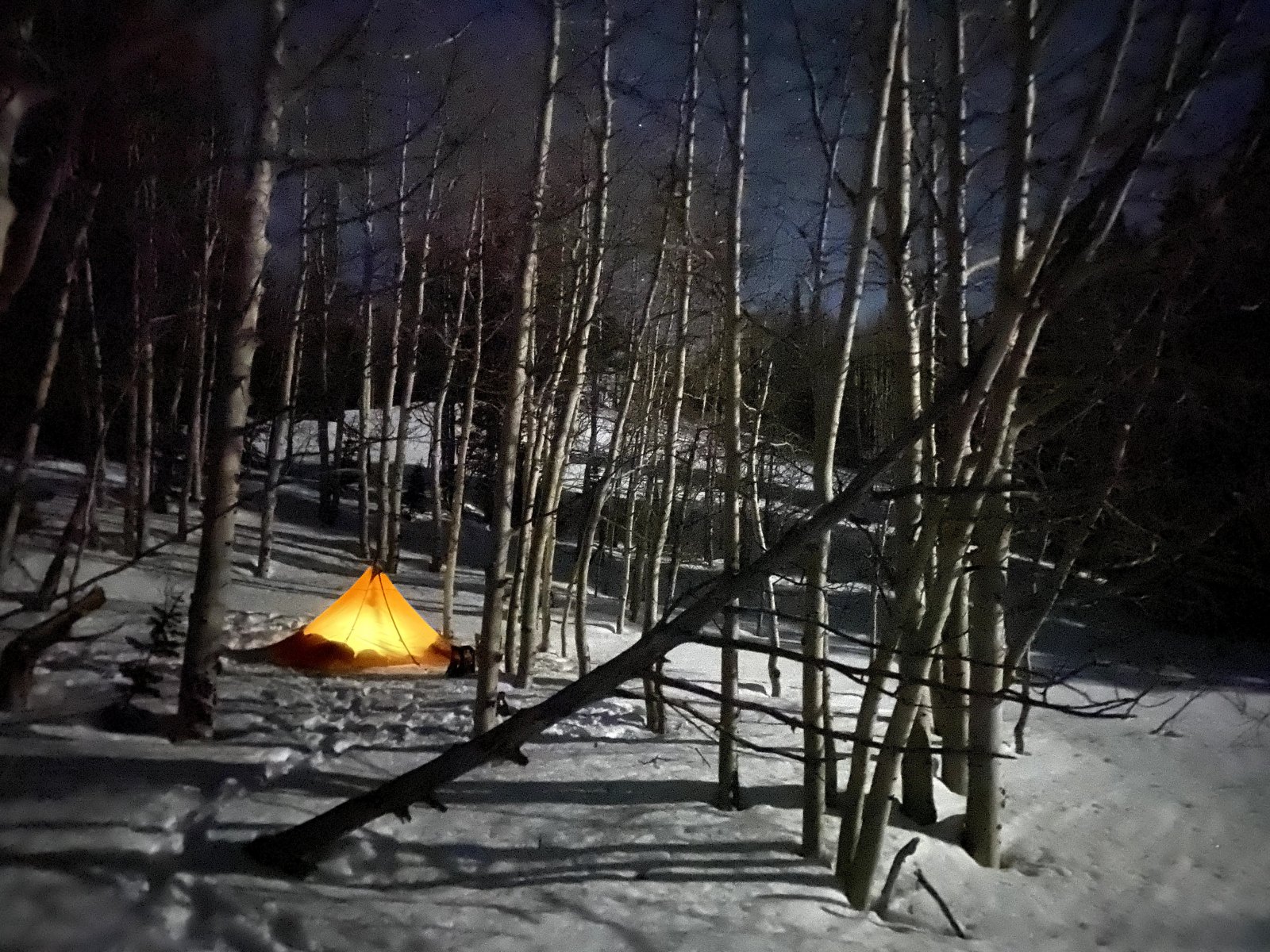 It took until after 1am before the moon really rose enough to light up the little desolate glacial bowl we were in.
I love moonlit snow, so I snuck out and took advantage. It was a scene from a specific Lord Huron song.
The temps had dropped well below freezing.
Absolute stillness.
There was no wind.
Only the pines were around.
The moon sparkly snow was consolidated back to its hard, frozen state. I wandered out onto the lake barely leaving a footprint.

I stood there in silence with the moon above me and the world was still.
I could just hear an owl, somewhere off down the ravine below.
It was a blessed few minutes.
Then there was movement in the snow behind me.
I turned slowly, but saw nothing.
Then it was there again, just back in the shadows.
Distinct, inconsistent. Crunch.
No headlamp and not enough light to see into the pines.
I was soon back in my sleeping bag.

I hate to quote this movie again, but it does describe the only tracks I found the next morning. I do watch tons of other movies...
"What? behind the rabbit?"
Tim: "That's the most foul, cruel, and bad-tempered rodent you ever set eyes on!"


Meanwhile, she was still asleep. 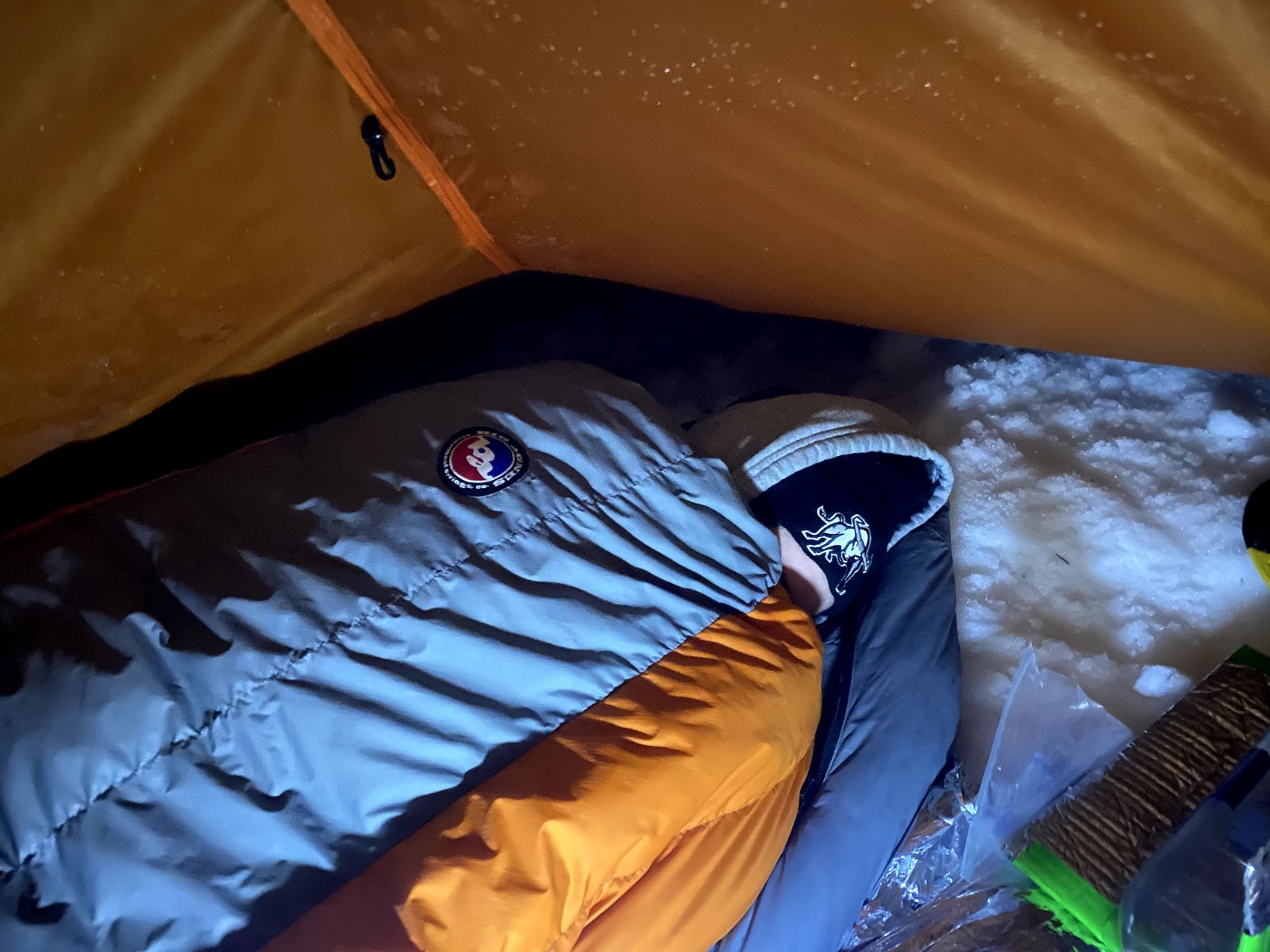 I went back to sleep quickly, but by 430am my mind was wide awake. This happens on normal nights. During snow camps with long nights it is worse.

The silence was still pervasive. Although the moon was now behind the clouds and the temps had risen a little.
The lack of noise led my mental train to a song about silence, which jumped to more Trolls movie soundtrack songs (from my kids).
So out came the headphones. Long jams were on order, Liz Cooper first which then descended into Tame Impala, and eventually it started to lighten up outside when Great Lake Swimmers came on.

No sunrise colors. Only gray and overcast. So after a short outside break, we hung out in the tent.
Eventually, I went outside and wandered while the snow was still frozen.

This could all be called,
Shadows and Tall Trees. 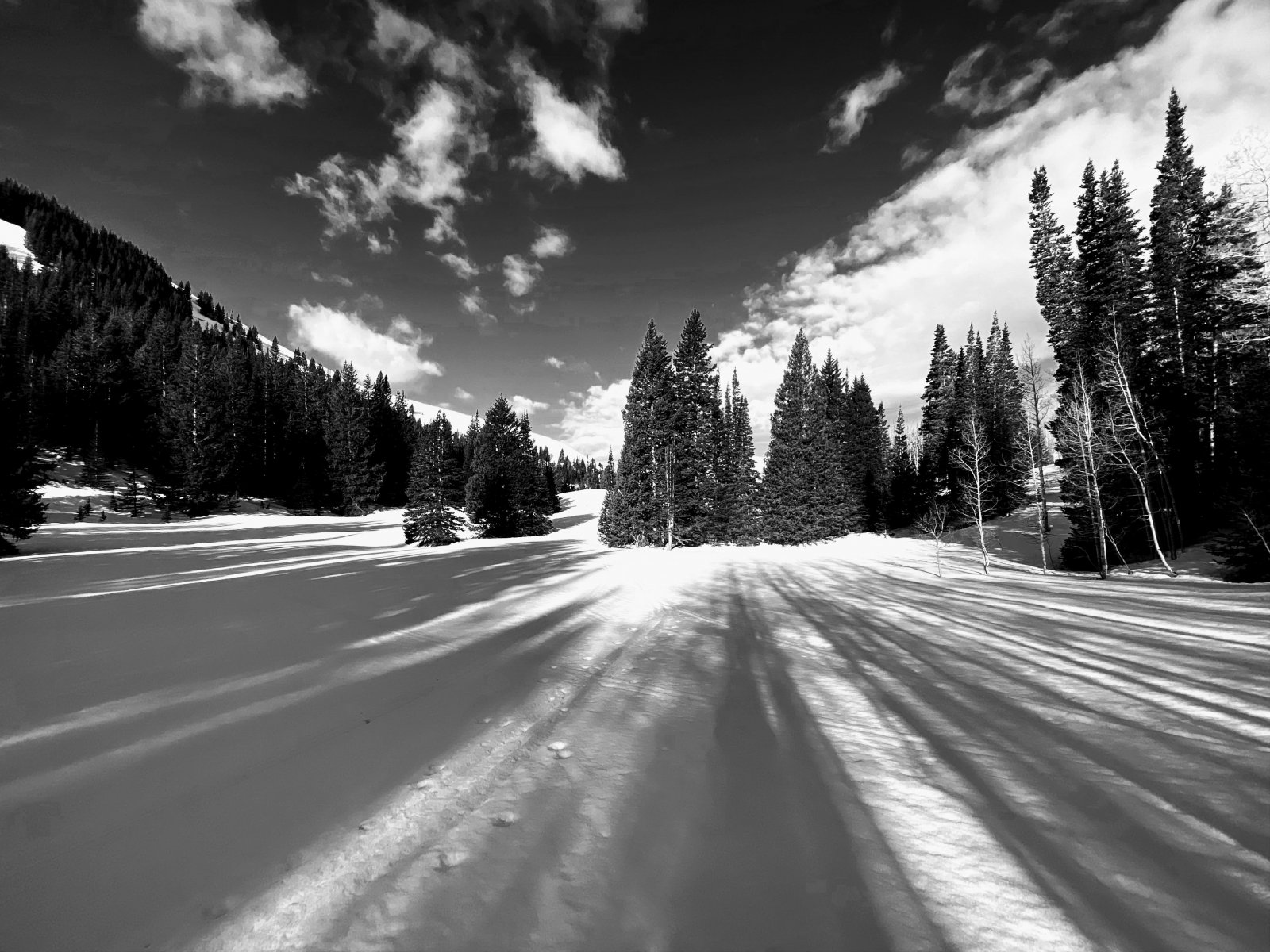 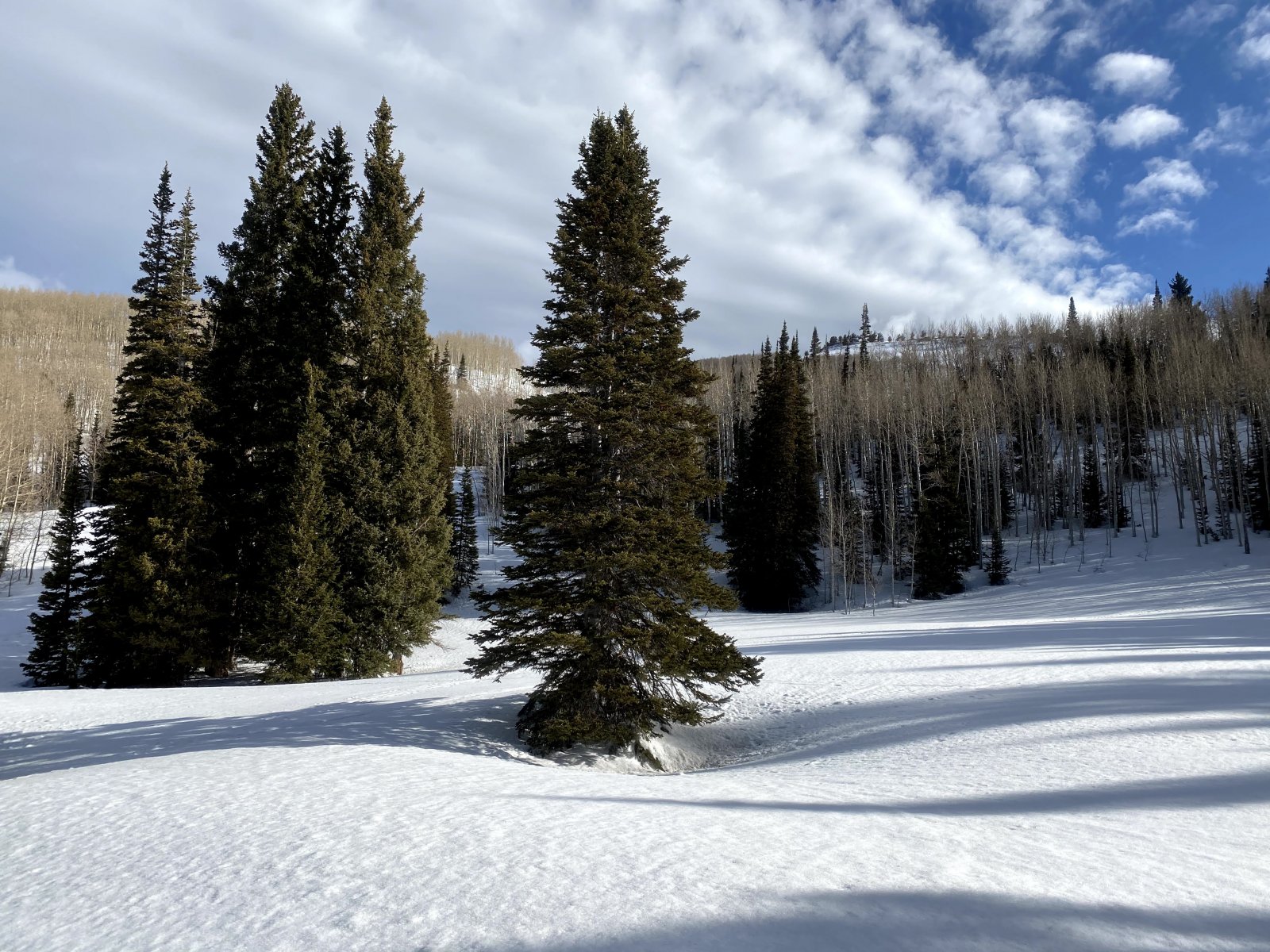 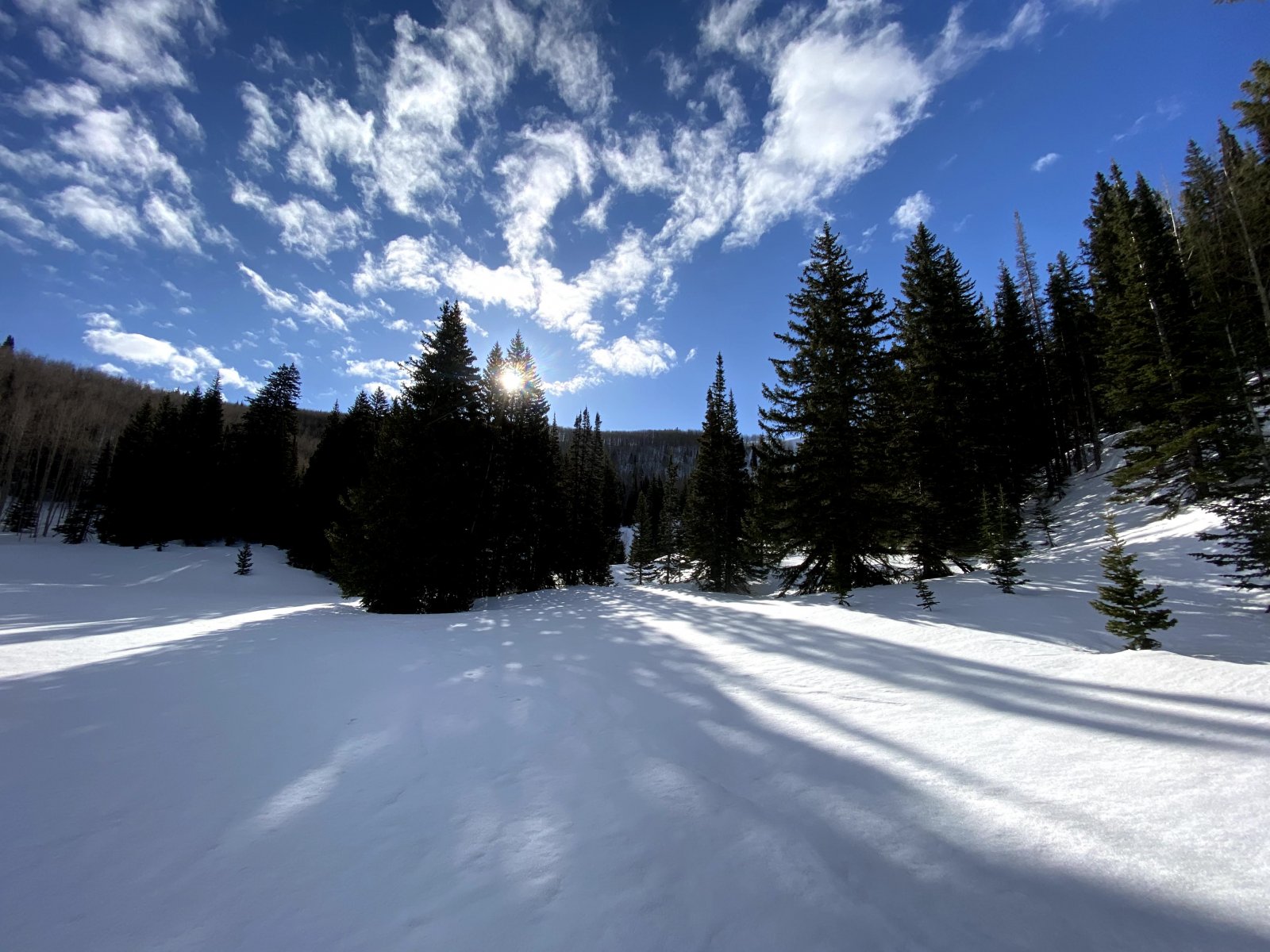 The aspens in amongst the pines or a pine in the aspens were the most striking. 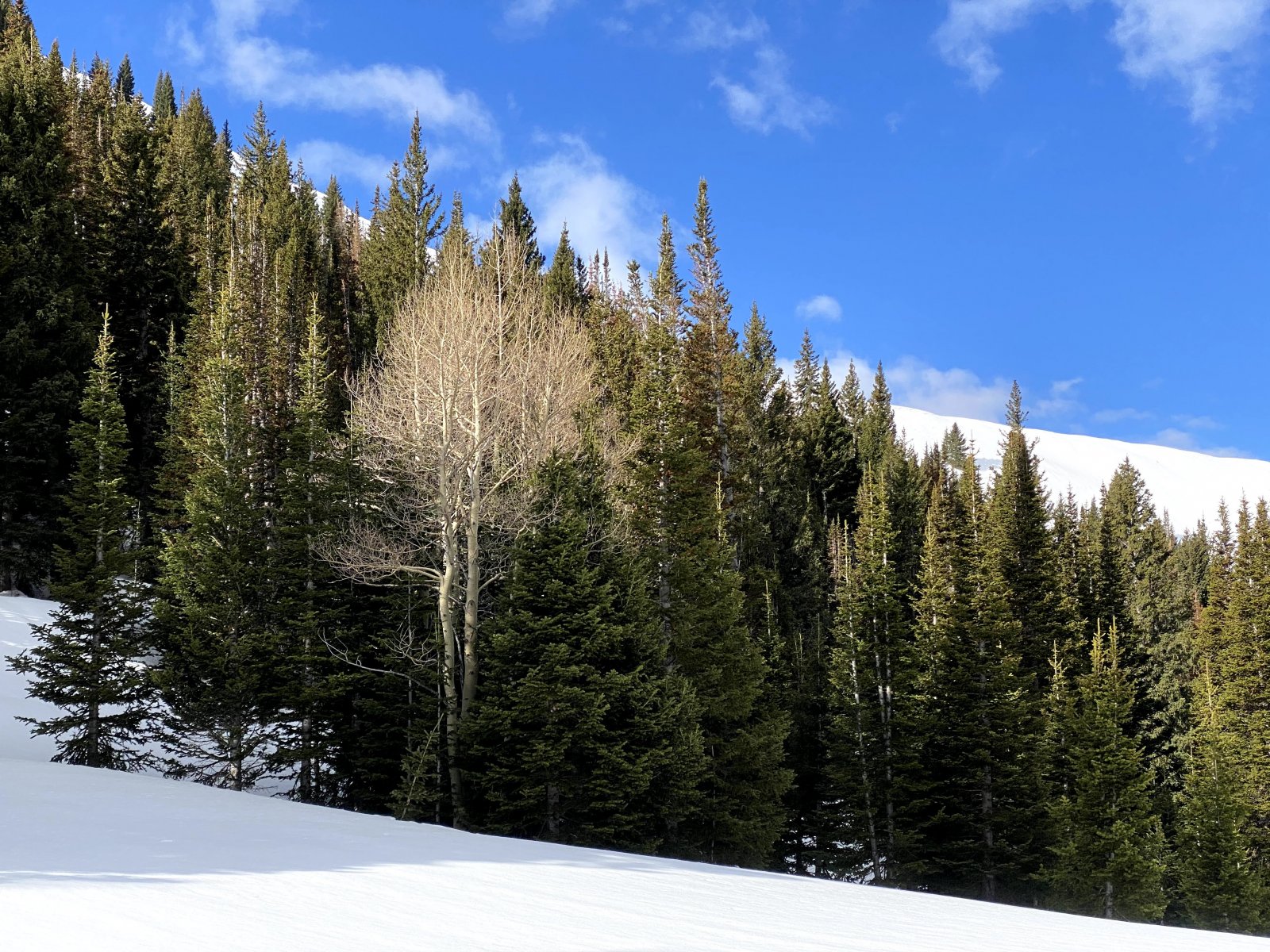 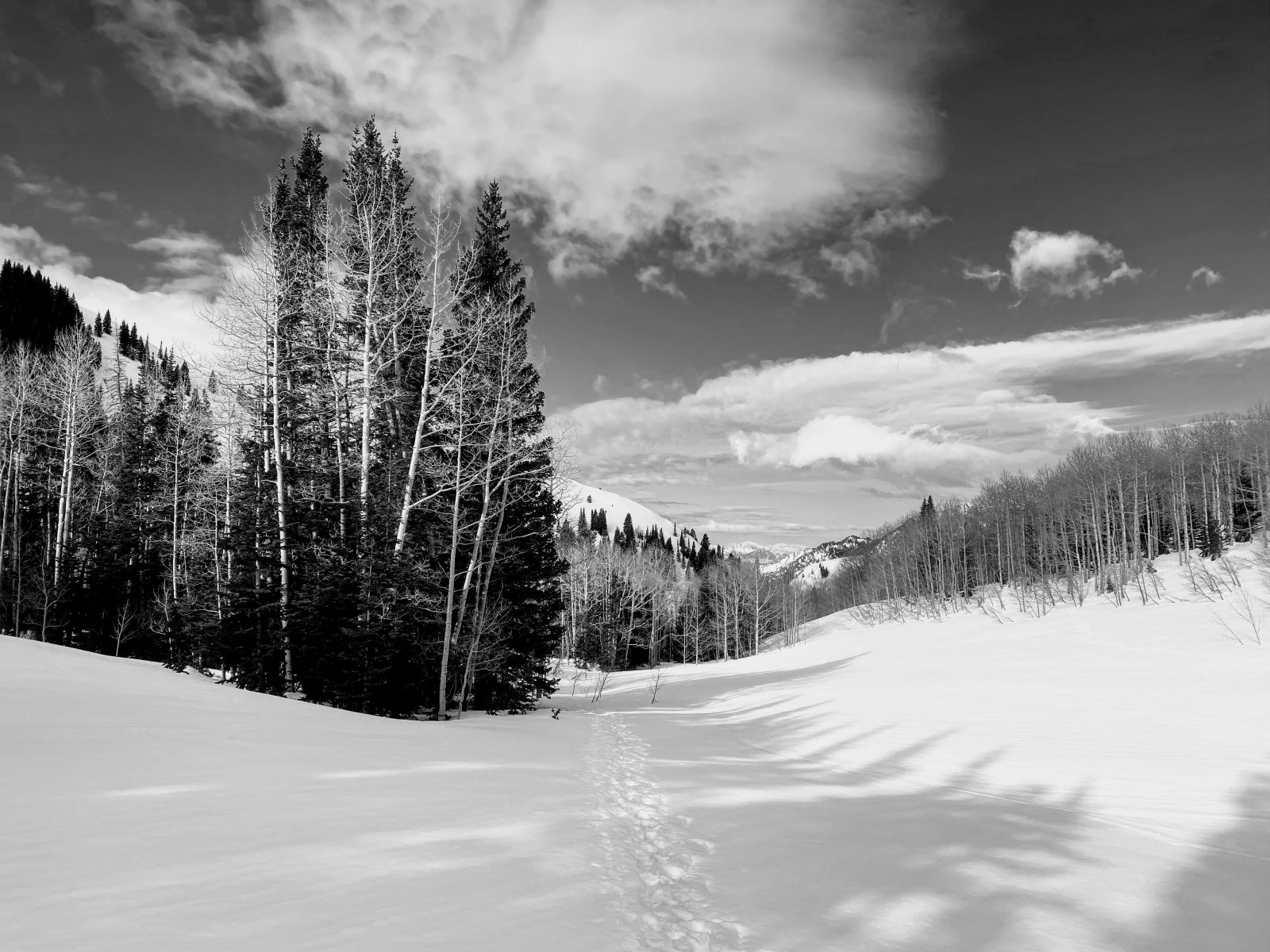 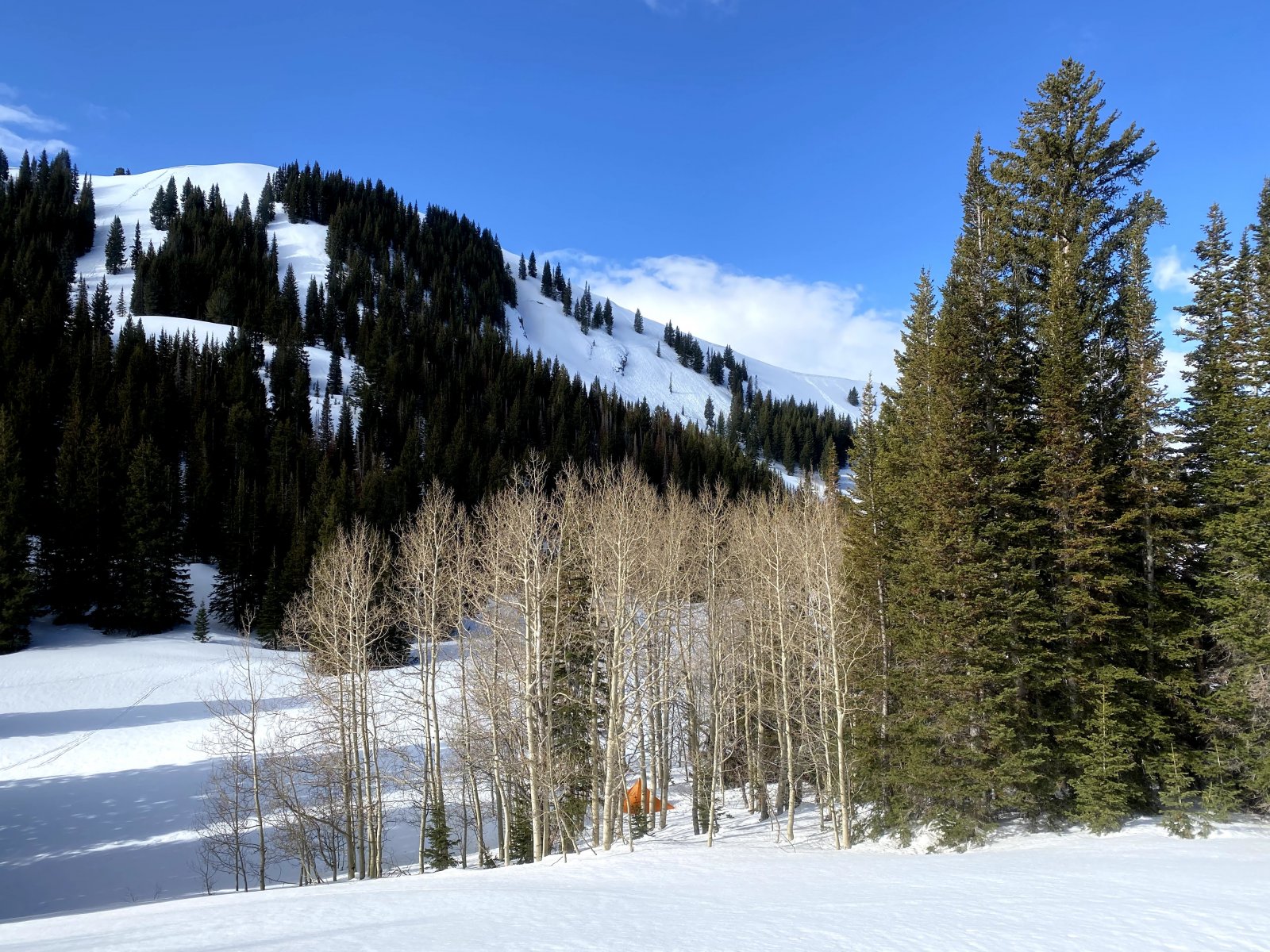 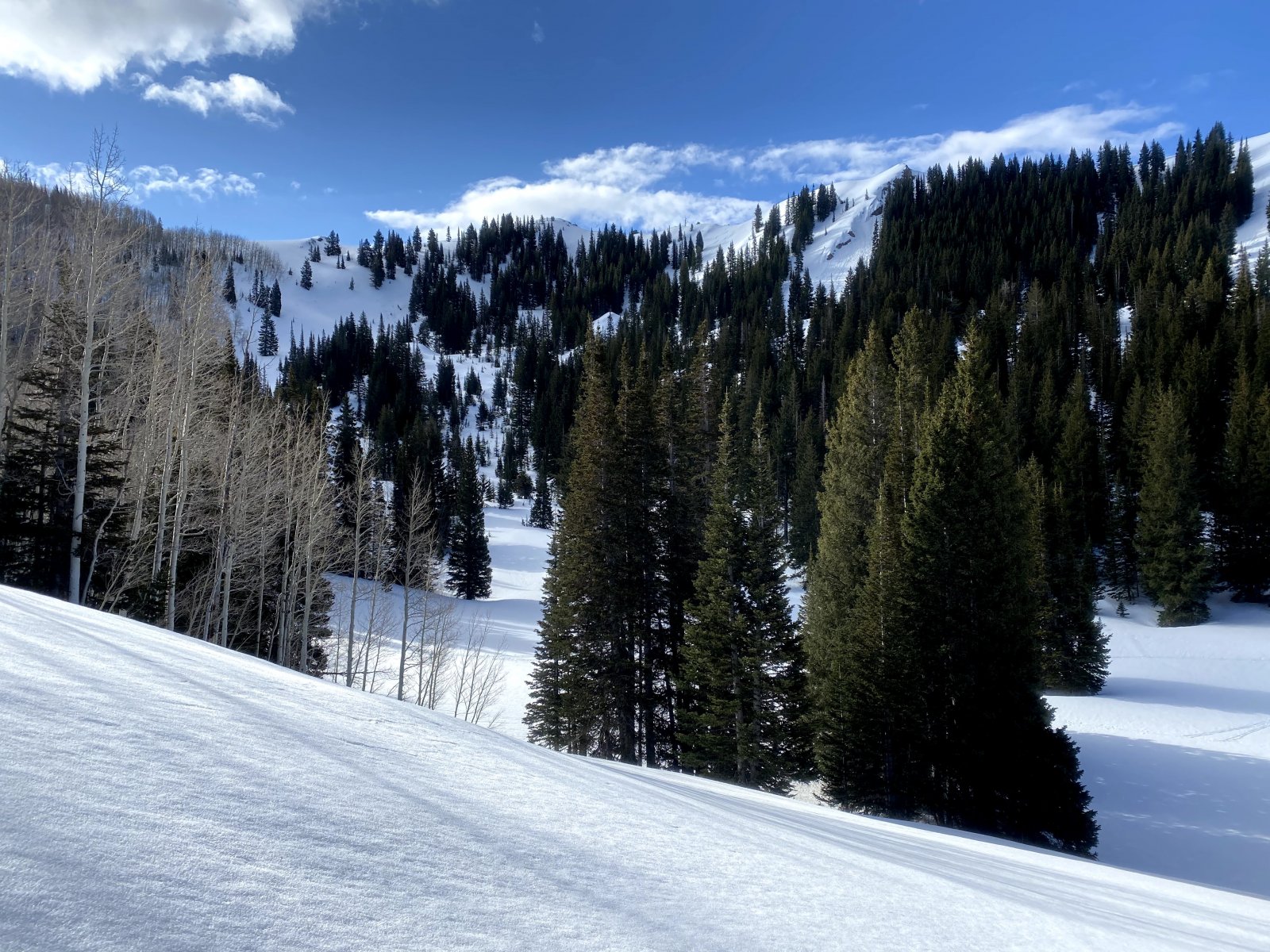 Finally I coaxed my daughter out from resting her eyes.
We found yet another use for the cozy. Previously also a seat, temporary cooler, water bottle insulator, something extra for any cold spots- like under your hips, and now.... 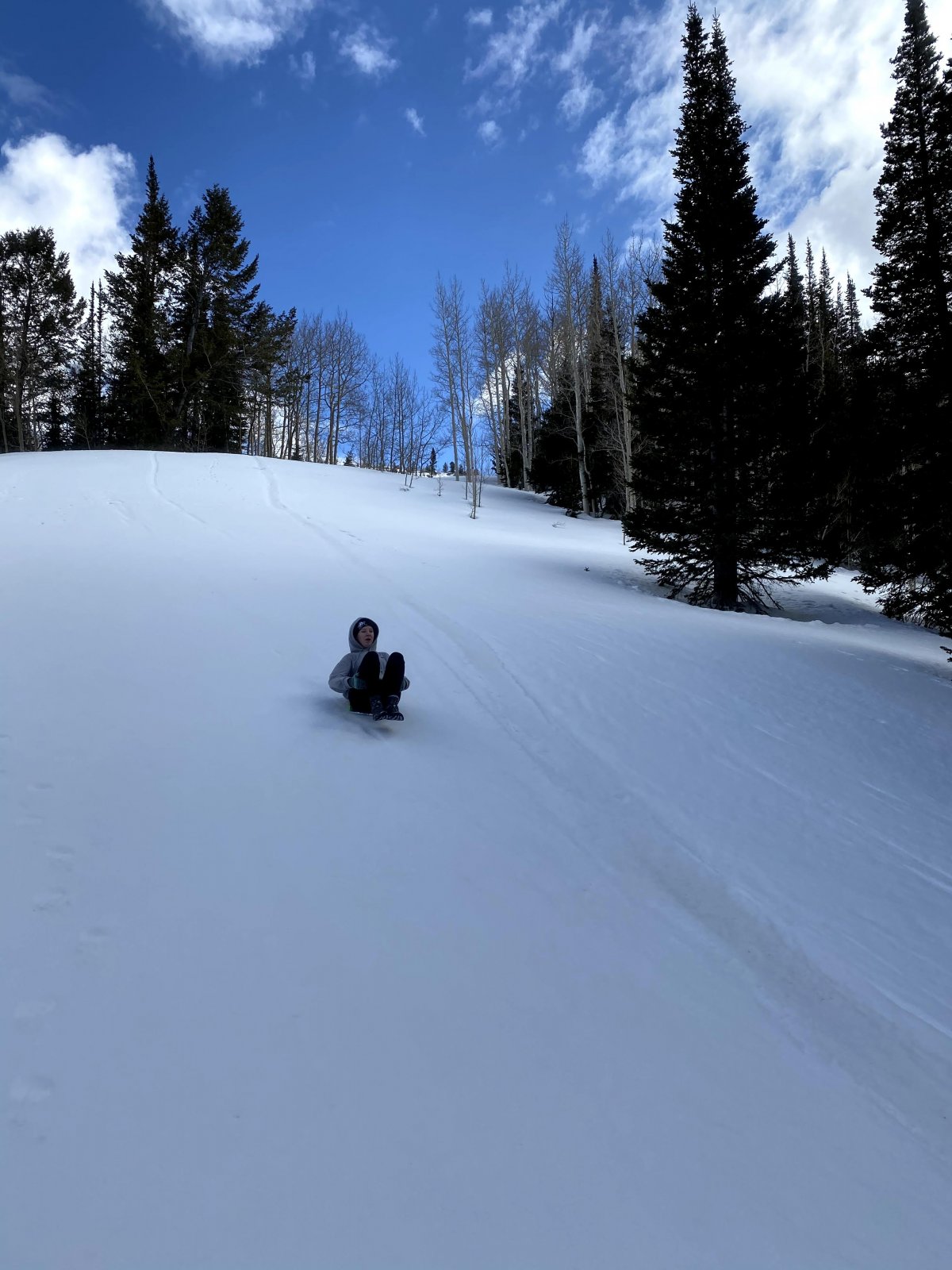 Finally, with some sadness of going back to spend more time at home, we decided to pack up and head out with a potential storm and winds coming in the afternoon.
It was a nice hike out into the gathering gray clouds. 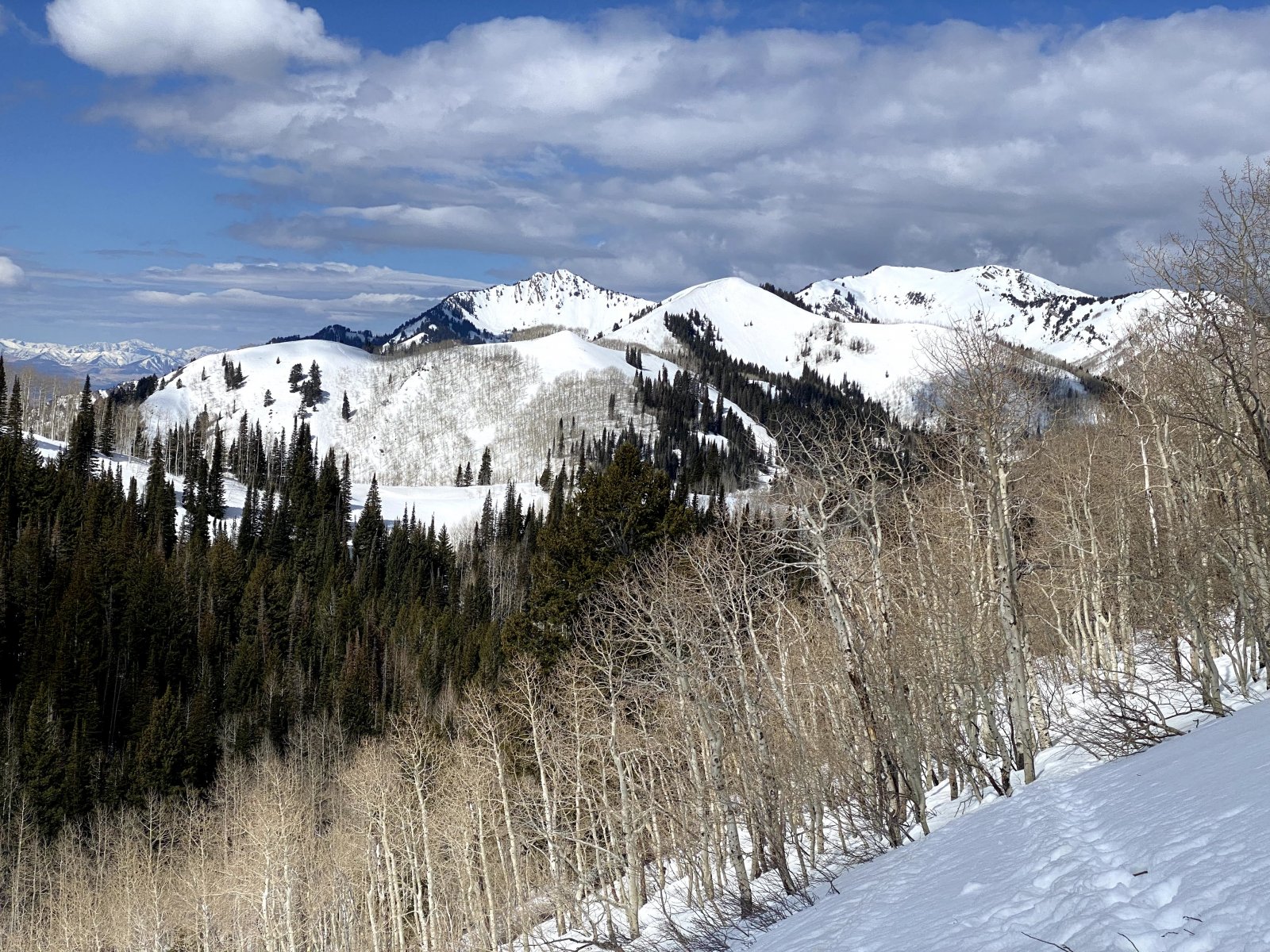 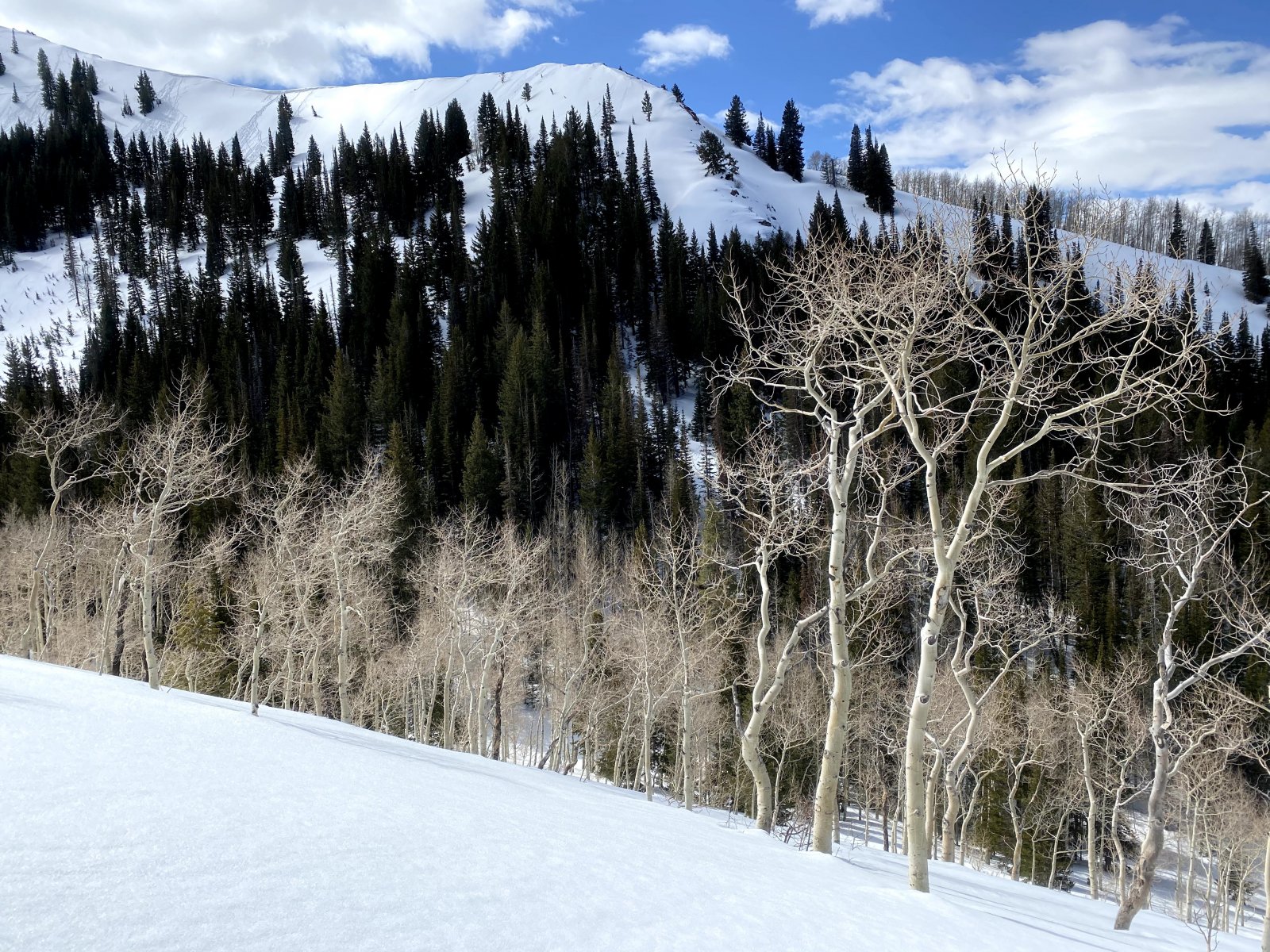 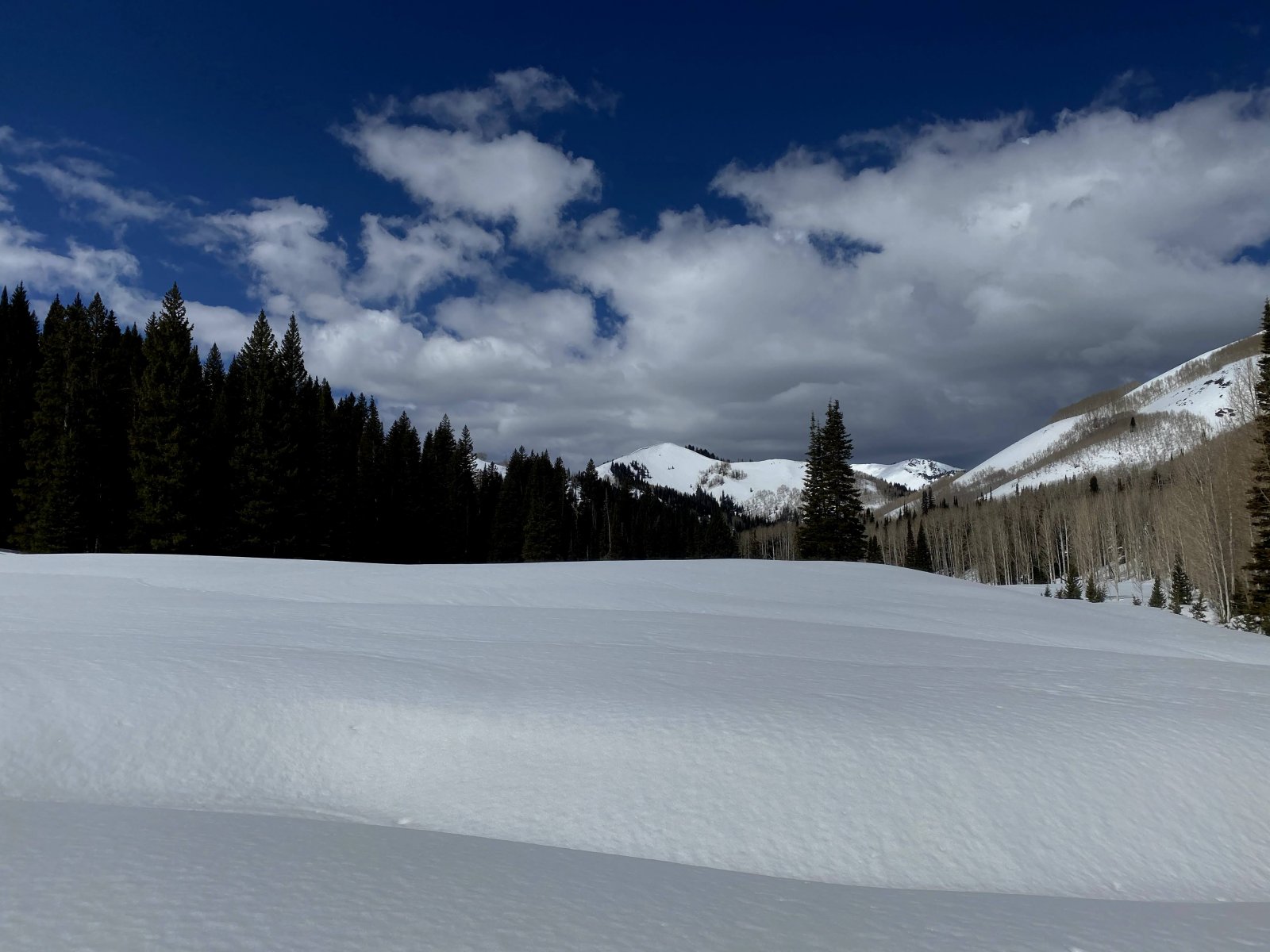 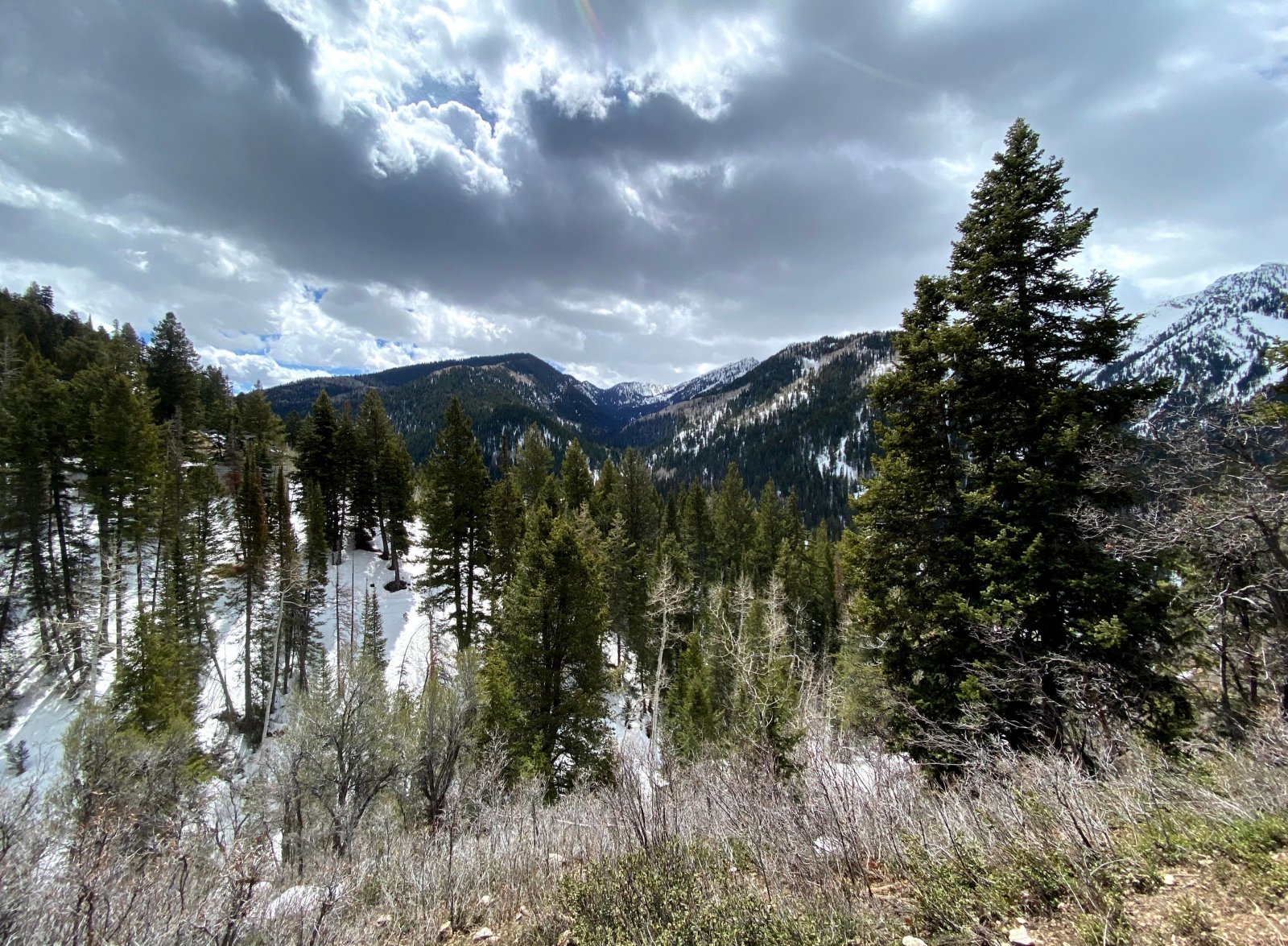 Spring is here, but I may have a few more snow camps yet.
I still have a few kids who I can convince to join me...

Great trip! The lighting was amazing in some of those pics.

Perry said:
Great trip! The lighting was amazing in some of those pics.
Click to expand...

Thanks, but I don't make the lighting...
haha

Glad to see people getting out in the wild with no hassles. Good trip for you and your daughter. Great weather.
Tim V.

Love it! Glad you got out with your daughter. I’m sure you can convince the others too. Sometimes we need to convince others to go and they are happy they went! Does she still talk about missing the desert?
(As I was reading your TR, my neighbor texted to cancel a walk this morning and work out in her basement . Why? A chilly morning with an overnight dusting of snow . I said, ok, but I’m still going, it will be beautiful (!) outside, just need some gloves and an an extra layer. A minute went by, she said, “you convinced me, I’m going too!”. We keep good distance).

especially love the pic with the pointy tree shadows

Titans said:
Love it! Glad you got out with your daughter. I’m sure you can convince the others too. Sometimes we need to convince others to go and they are happy they went! Does she still talk about missing the desert?
(As I was reading your TR, my neighbor texted to cancel a walk this morning and work out in her basement . Why? A chilly morning with an overnight dusting of snow . I said, ok, but I’m still going, it will be beautiful (!) outside, just need some gloves and an an extra layer. A minute went by, she said, “you convinced me, I’m going too!”. We keep good distance).
Click to expand...

My daughter did say ask again this week if we could try to make it south before it gets too warm. All the kids have expressed some disappointment as the spring break trip to the desert this year was one we had planned for a while. Maybe this fall, maybe next year.

Amazing! I feel like I learned things. I want to make a pit toilet with a lid! Are you guys just using a tarp and sleeping on snow (I know not directly, probably have a pad...)?!

Miya said:
Amazing! I feel like I learned things. I want to make a pit toilet with a lid! Are you guys just using a tarp and sleeping on snow (I know not directly, probably have a pad...)?!
Click to expand...

It varies, this time we used just an emergency blanket under each of us. When my friend comes he brings a Tyvek groundcloth, but since my emergency blanket is packed in with my stuff I pull that out too.
You must log in or register to reply here.
Similar threads