Inspired by @ashergrey 's couple reports of flaming gorge on his kayak, I drove up to Gorge this weekend with my friend and 2 dogs. Since we were late getting off Friday, we just wanted to find a site to settle down for the night and launch in the morning. We arrived around 7PM and few developed campgrounds in the Sheep creek area were already full.

Driving up, we found a nice primitive site, a mile or so from the main road. 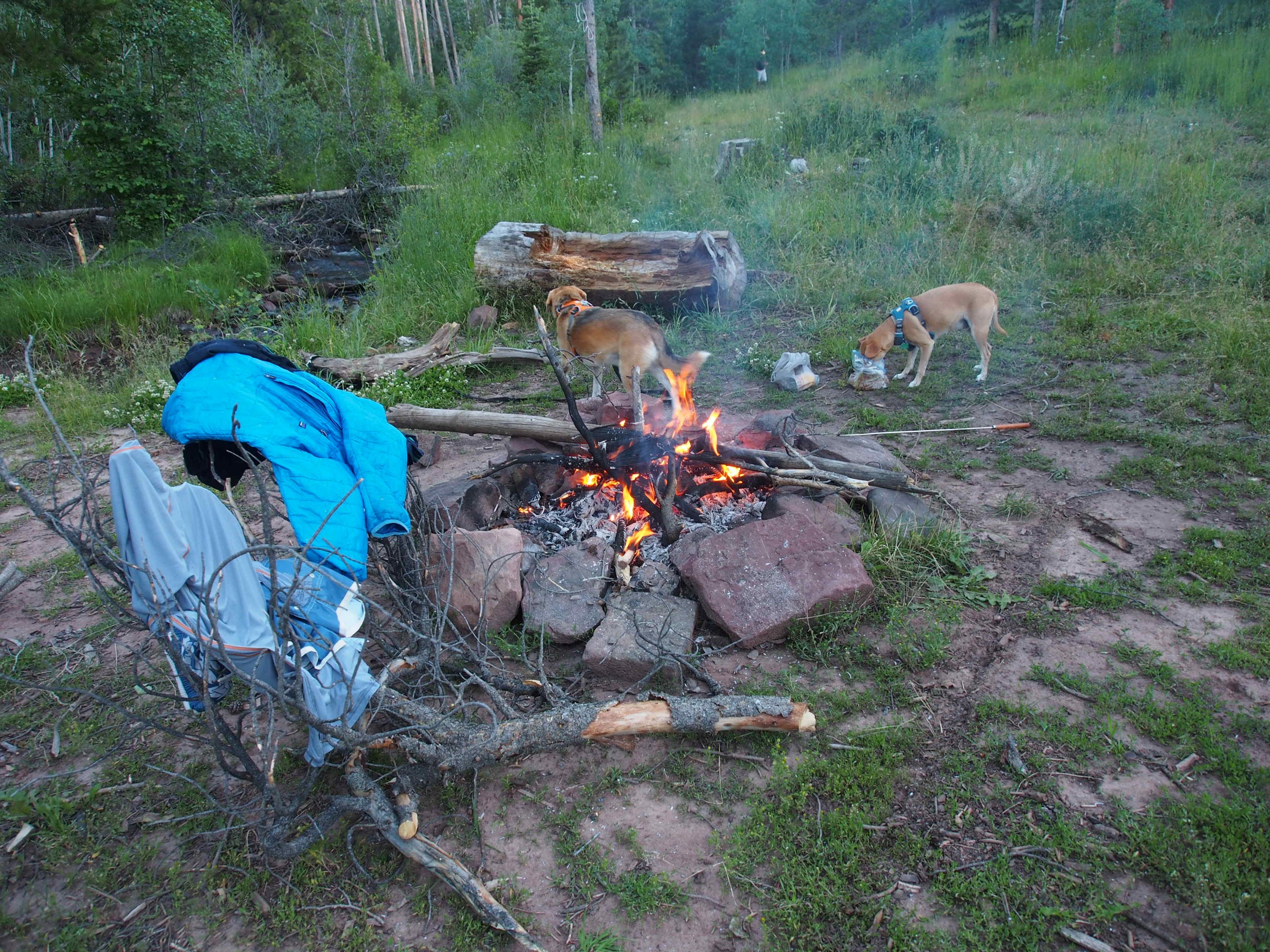 Dogs eating while I am trying to dry my clothes wet from leaked melted ice in the car. 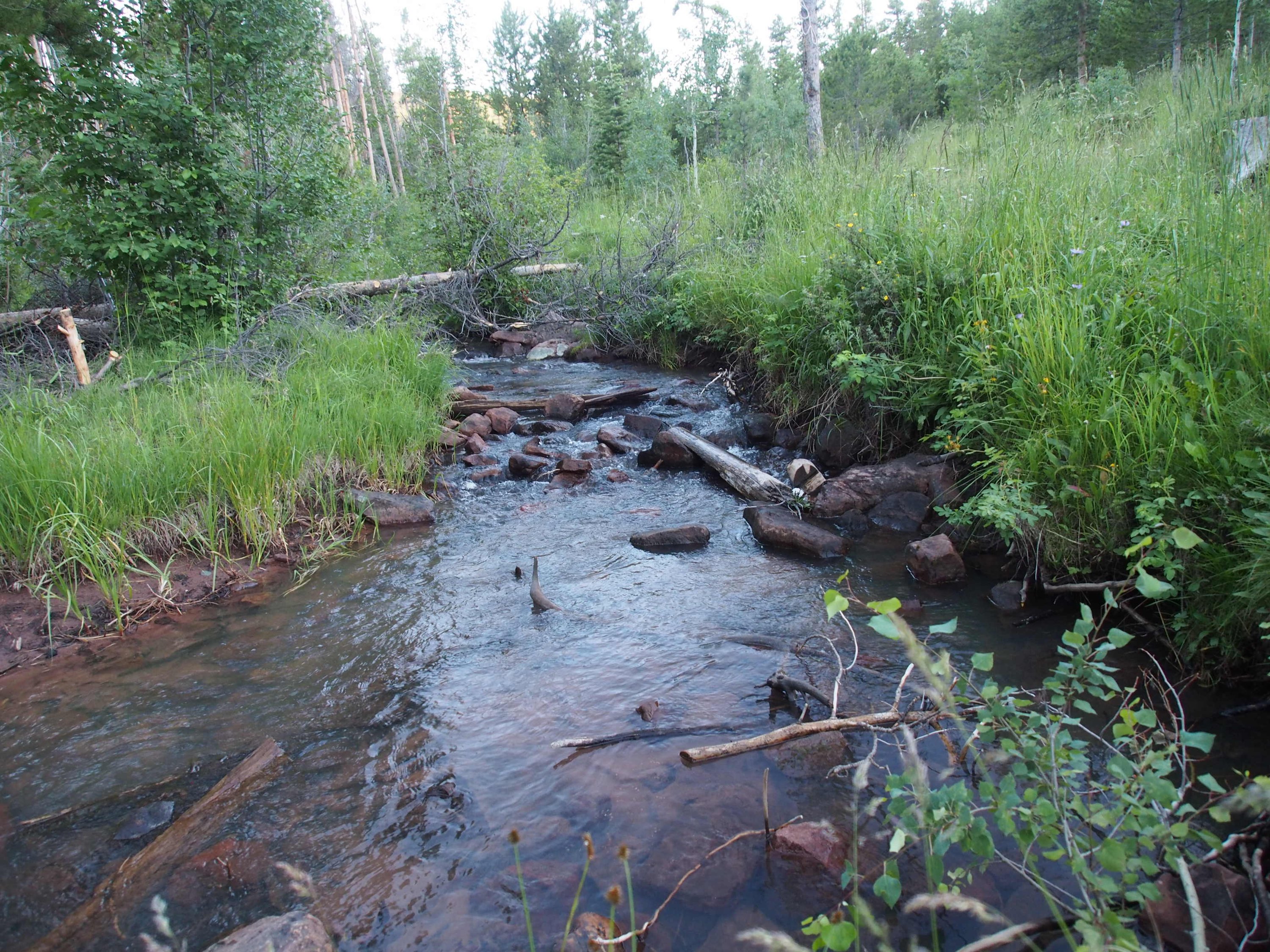 Hope went her usual rowdy way and was alert to any sound coming from any direction. For a while both dogs were on their hind legs and we were sure some sort of animal was near our site, whatever it was. Rest of the night went pretty smoothly, we just drank beer and trying our hand at night shots. 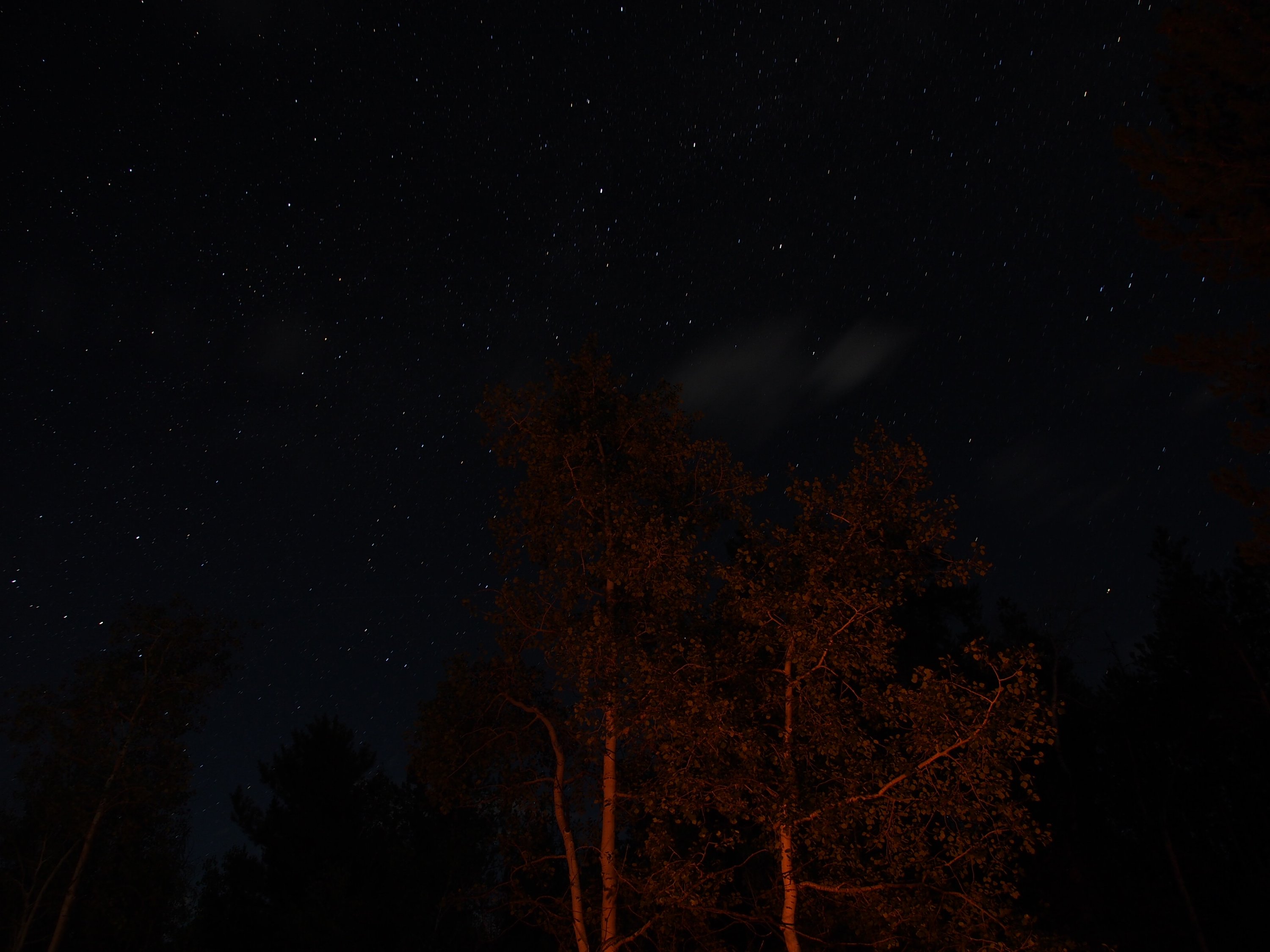 I had plans to wake up later to try taking shot of Milkway and I did wake up. But it was freezing cold, and we were not quite prepared for it.

In the morning, sun took a while to creep through those tall canopies and I wasn't enjoying chilly morning at all. Finally after having some coffee and packing up, we drove back down to Sheep Creek launch area.

We launched to some curious onlookers, as they were unloading their boats of various sizes. Having never canoed in water body this big, I was bit cautious but excited as well. 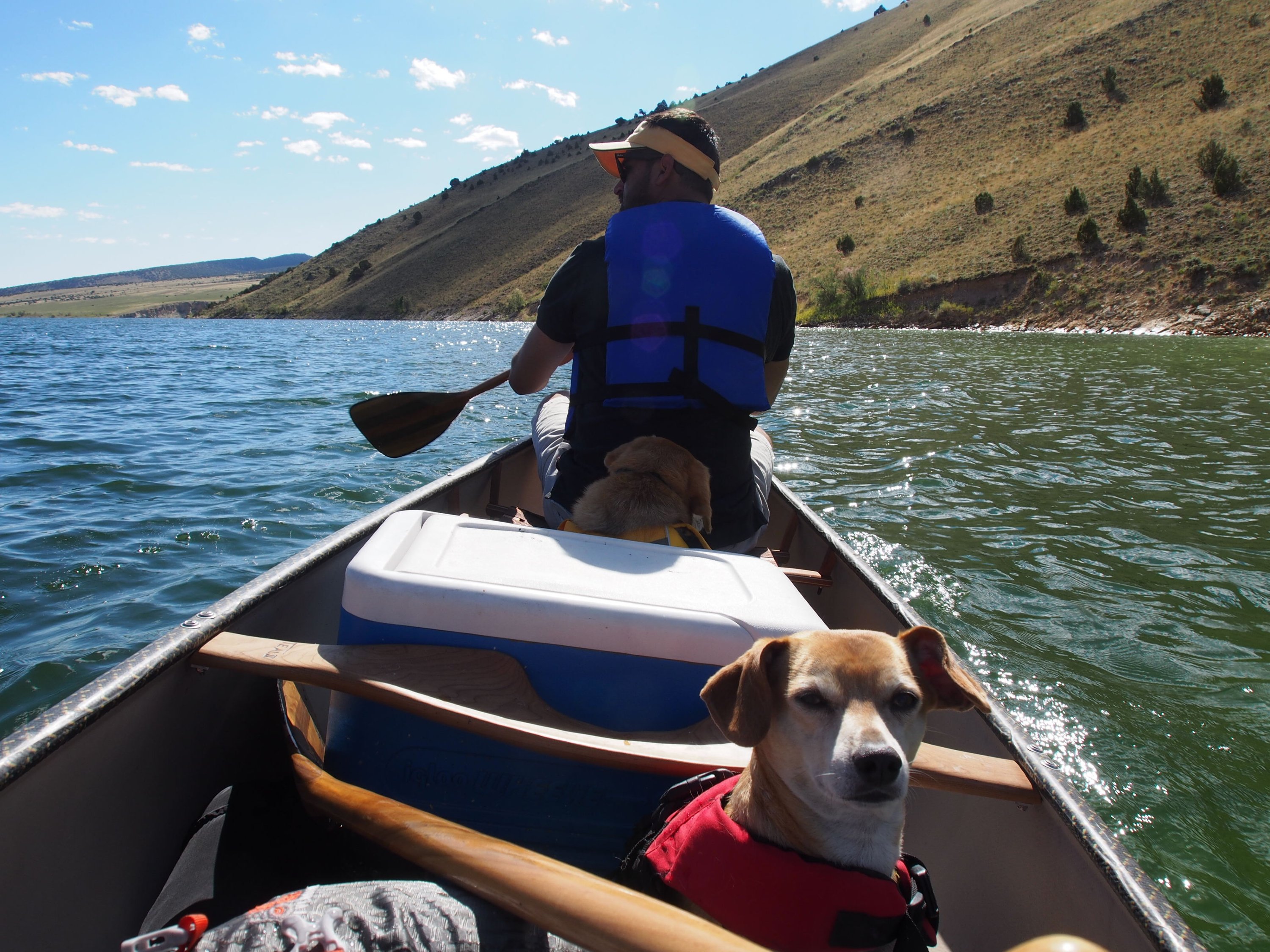 Hope behaved decent most of the bumpy canoe ride while Scooter was his usual mellow self. Soon enough, after clearing the low speed zone, we experienced waves created by the passing boats at full speed. 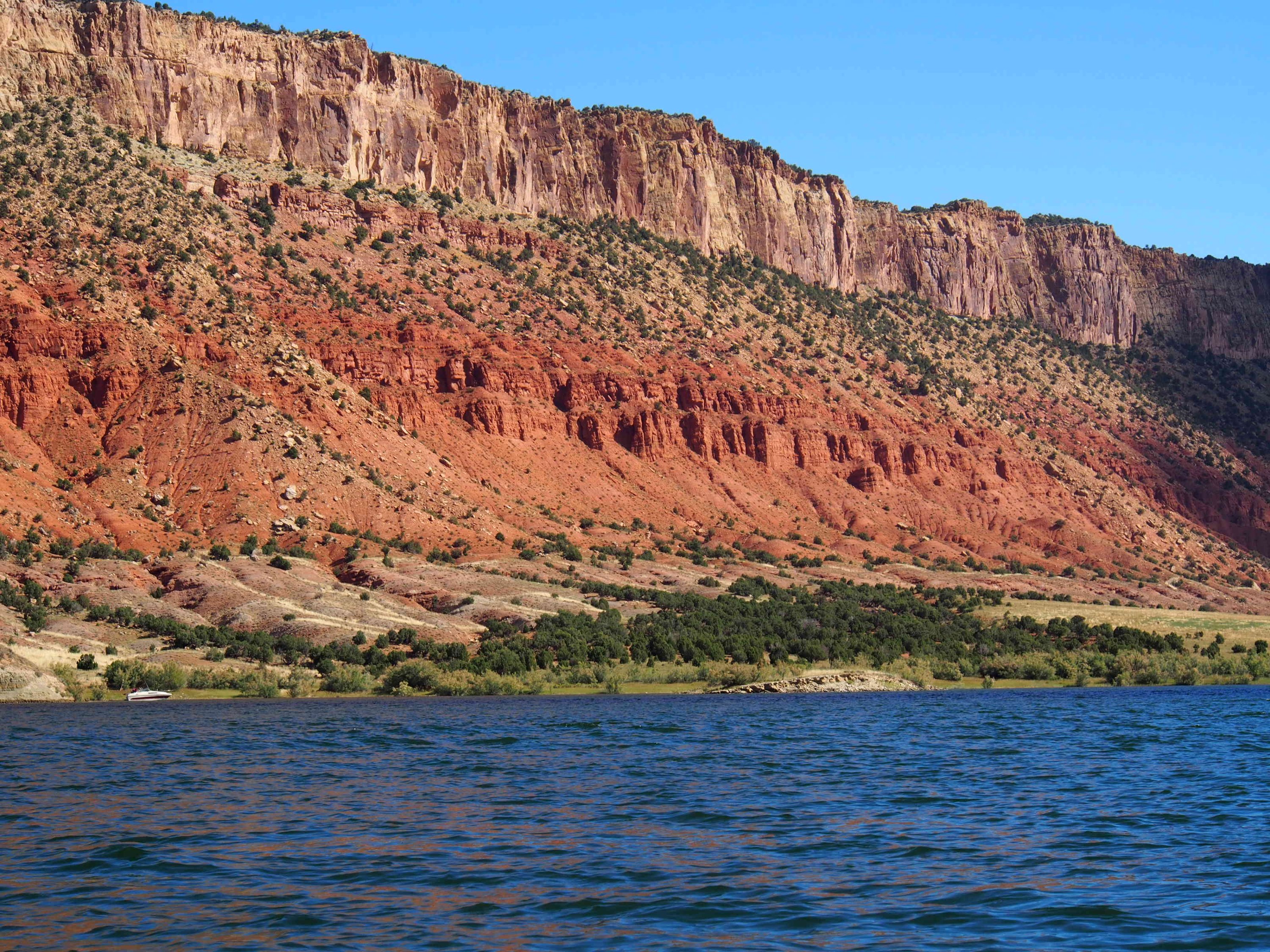 I was brave enough to take out my camera.

I didn't have any specific plan except to make it hideout canyon and then go from there, as far as campsites goes. As soon as we turned right from Kingfisher towards Hideout, the boats just seem to come out of nowhere, one after another. I had read about meeting the waves at perpendicular to minimize their effect and used it few times, but the waves just kept coming and it was pretty scary for a bit. We were right against the canyon walls and maybe that didn't help it, but we just paddled harder(and probably inefficiently) as tried to escape that canyon.

For us newbies, it felt like an eternity, but we finally made it out to Hideout canyon campground and were relieved, to say the least. I wanted to paddle more but my friend wasn't in the mood, so we settled on finding a site there. Campground was full, so we just took first primitive site that we came across, right across from the main campground. 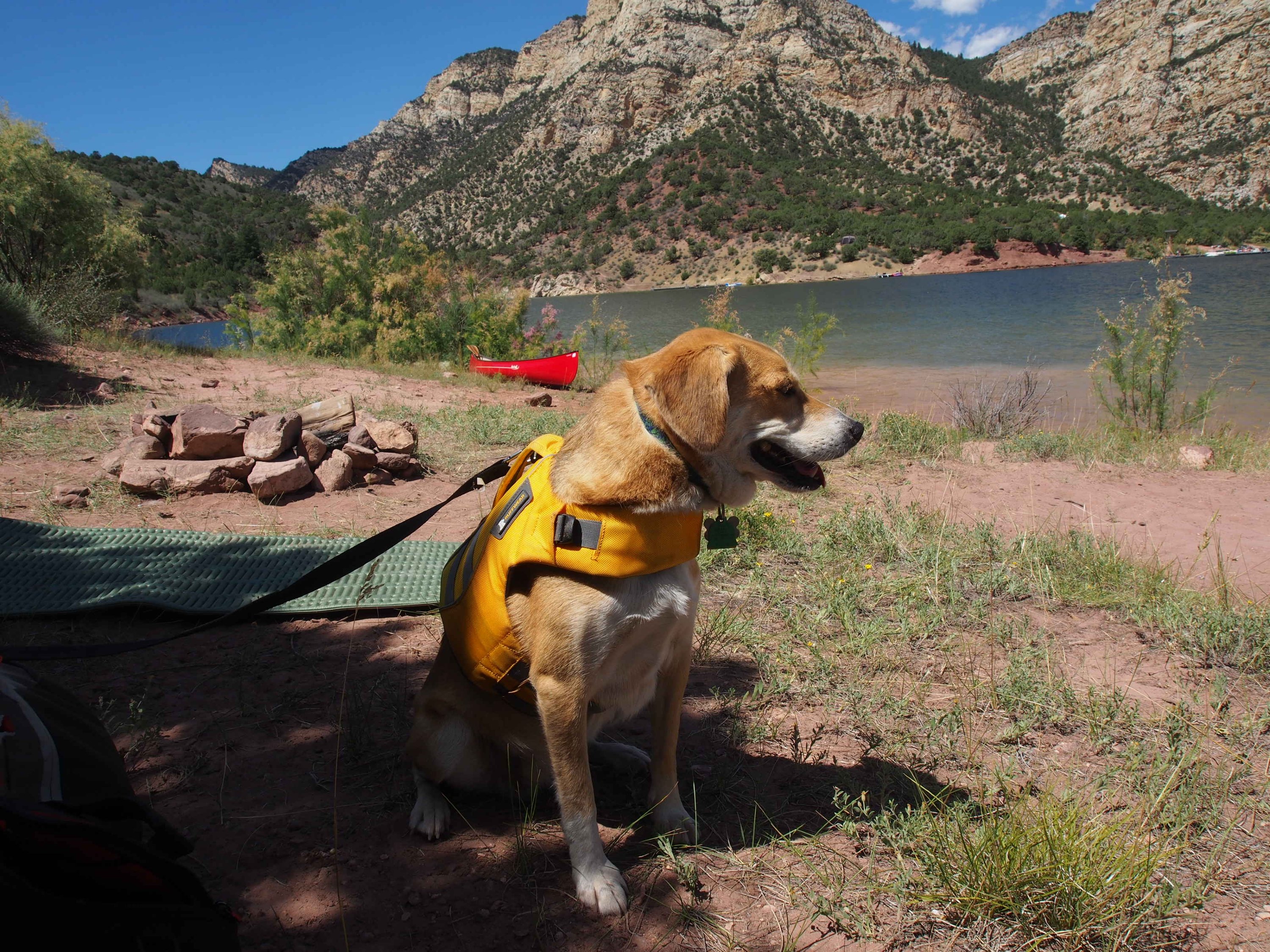 Hope relaxing at the site. There wasn't a lot of cover from the sun, which is why this site wasn't occupied probably, but we didn't care. It had a good sweeping view of the canyon and distant music from the campground. 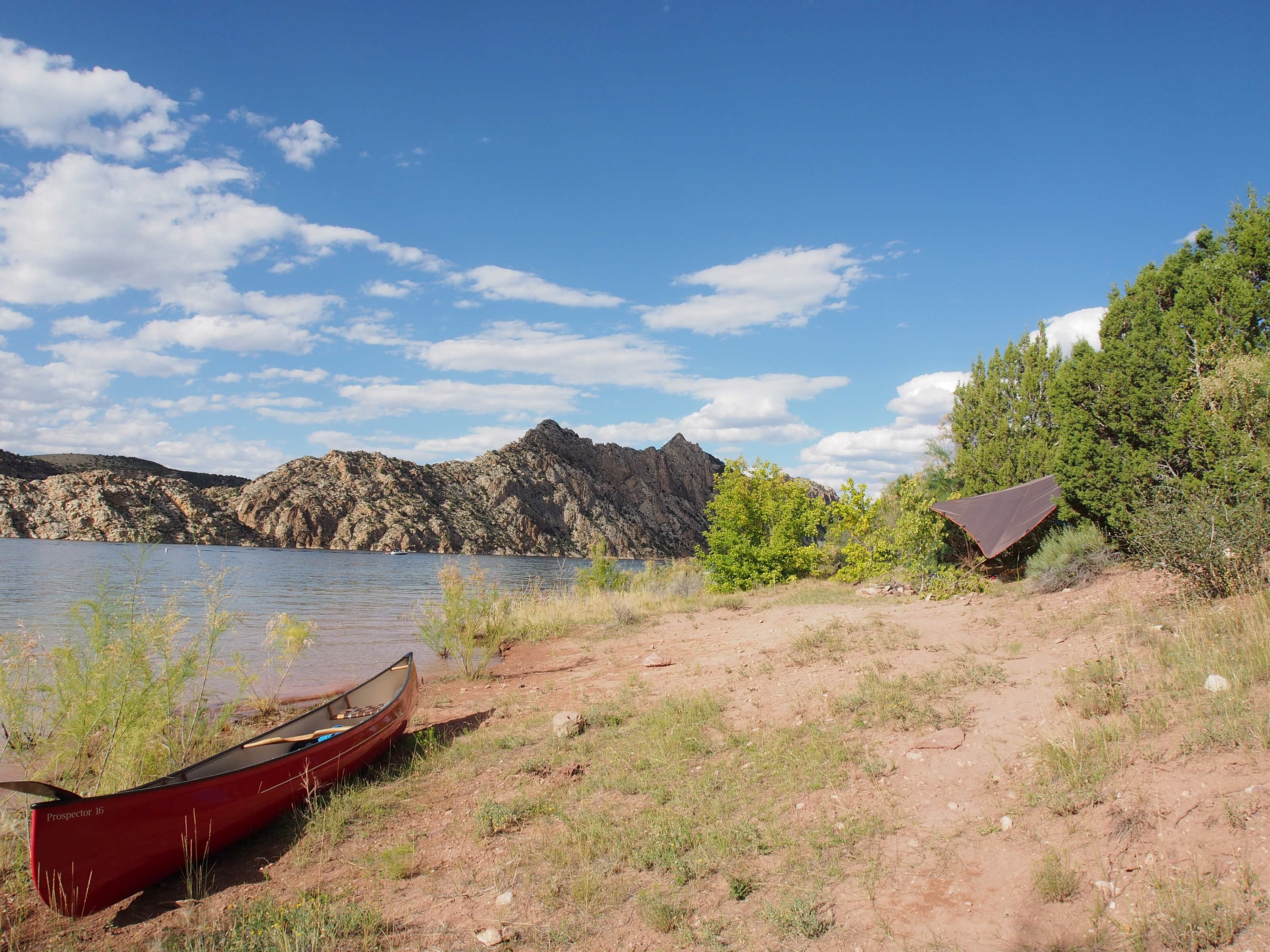 Canoe with the tarp setup.

For rest of the day, we literally did nothing but just relax, drink beer and nap. Dogs were not in the mood to hike anywhere either. Saw boat after boat come and go in either direction. It only died down later after 6pm or so. I tried my luck throwing a fly or two but no luck with fishing. Then I just paddled solo in the small cove area once waves had died down, it was so nice and peaceful finally. 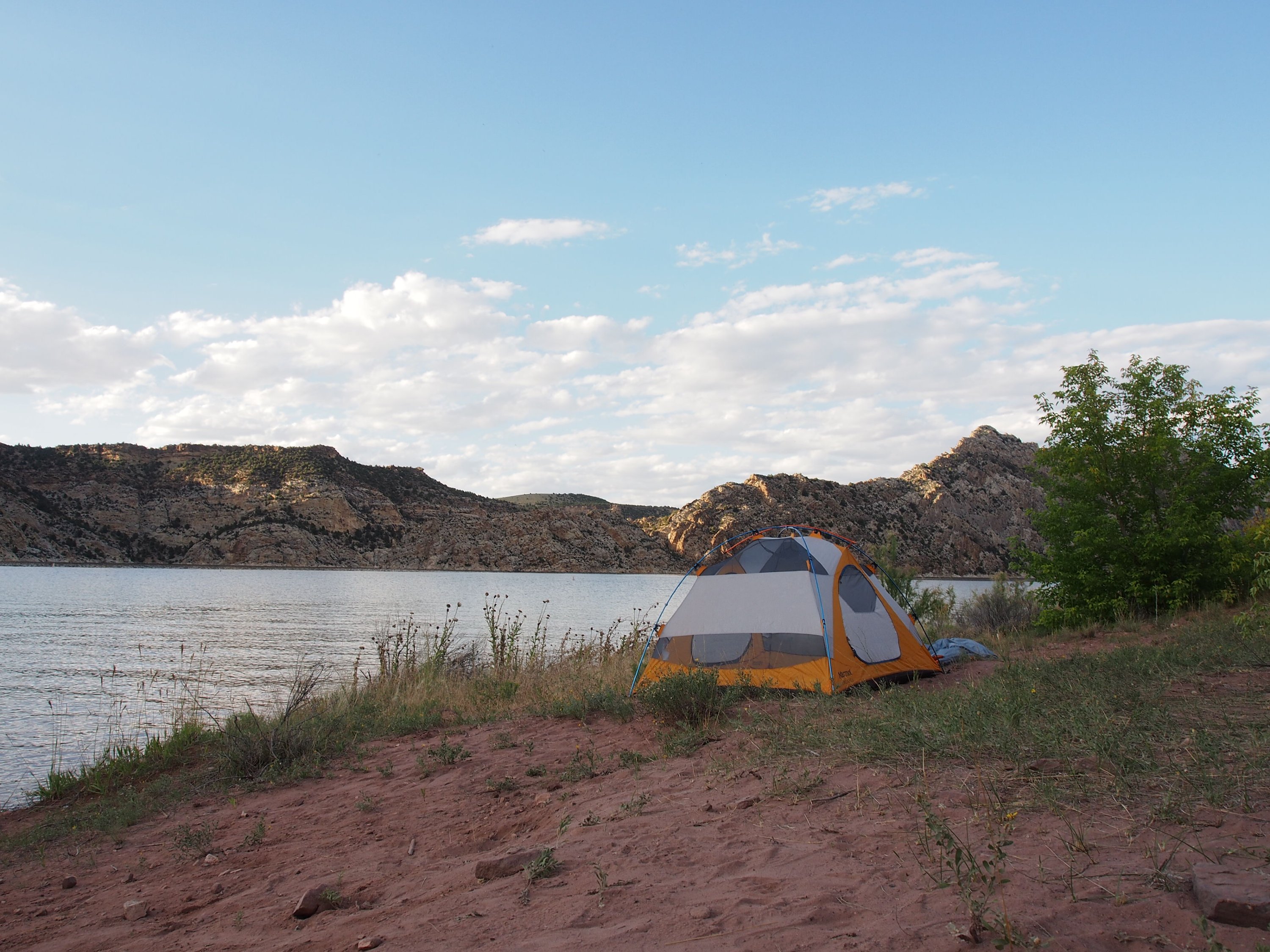 Finally pitched the tent before it got too dark. 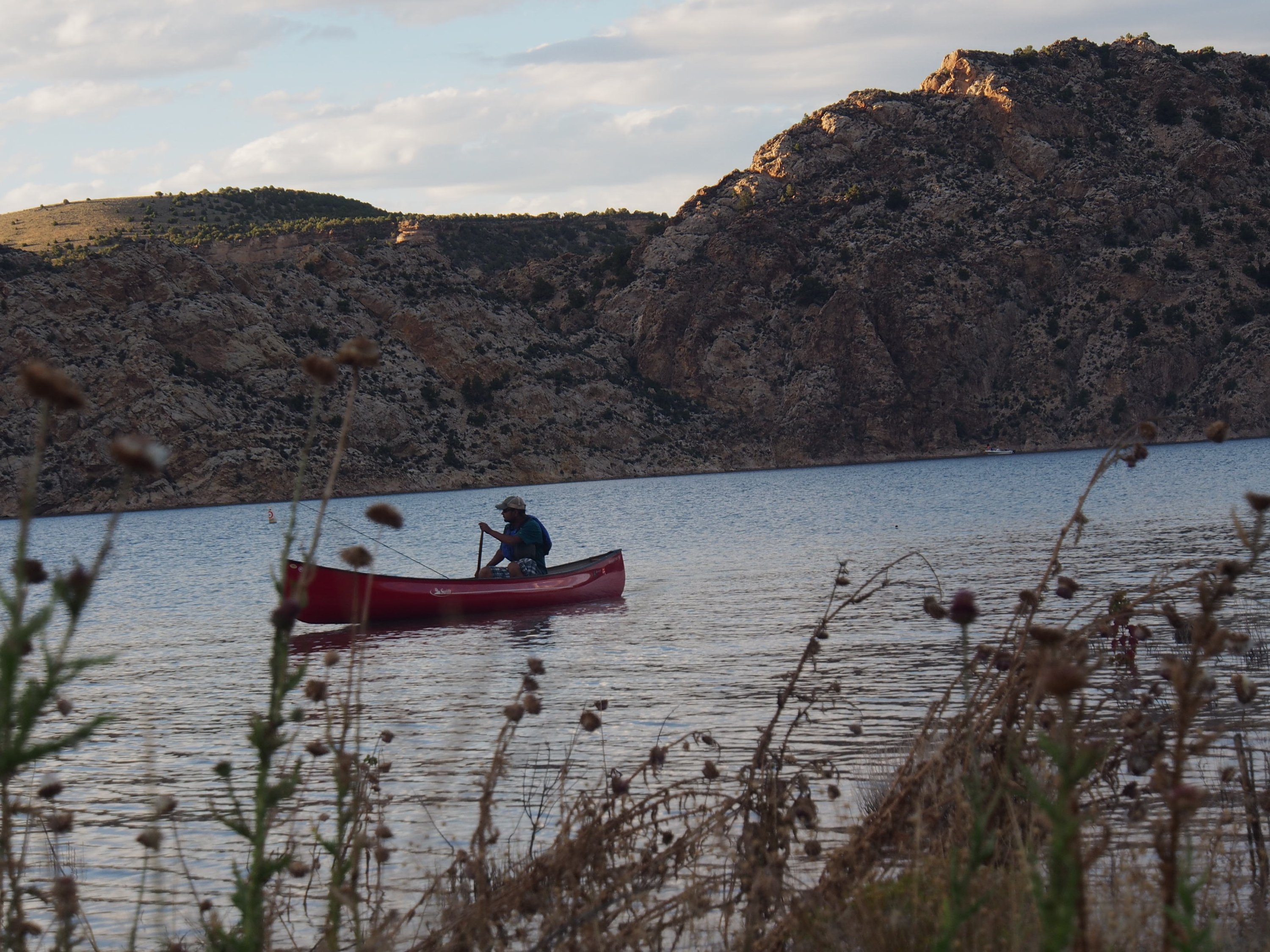 Me paddling solo. Wind was playing nice, otherwise the canoe was at it's mercy. 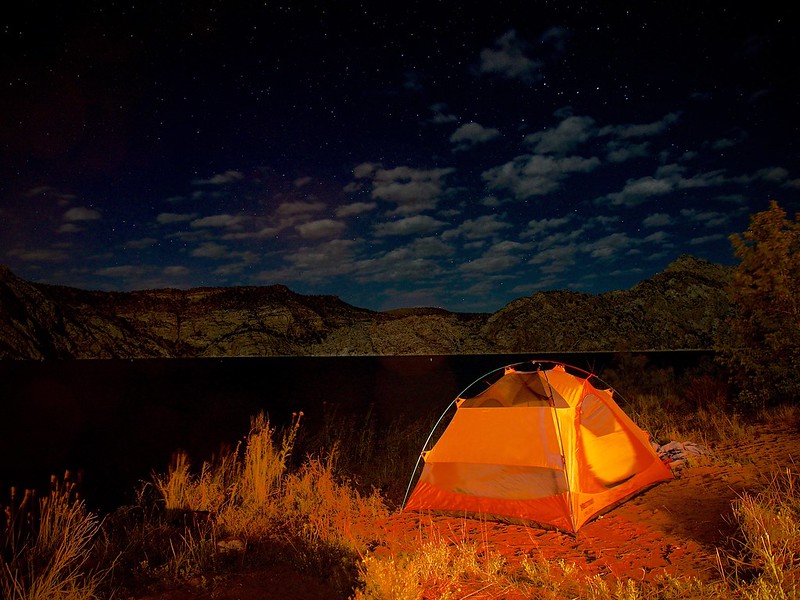 Campsite at Flaming Gorge by Hope Scooter, on Flickr

Again took some night shots before finally retiring to bed.

Next morning we woke up early, and after coffee quickly hit the water before boaters had chance to make it their own. We made it back to launch area pretty quickly, not having any waves to fight through.

Except for few nervous moments, it was a decent trip to the Gorge.

Nice looking paddle! Cute pair of pups you've got there too.

Awesome. Glad you made it through with all the wakes. For what it's worth, the Gorge really calms down after August.

Boat wakes suck. I'd be especially freaked out in a canoe. Great trip report though. Still looks like a nice time.
IG: @backcountrypost
You must log in or register to reply here.
Similar threads