Like every June I started my annual Utah trip in Salt Lake City.
After I picked up my rental car, I decided to spent a little bit of time again in the Swell. I headed down toward Castle Dale and turned onto the Green River Cutoff Road. I've been here several times before, but last year I discovered some hoodoos and Goblins near The Red Knoll and I wanted to check them out today. I passed the Entrada Sandstone sign near White Rocks and the junction of Hambrick Bottom Road and turned onto a small spur road near a cattle guard.
I parked and began to explore the area.
The area was smaller than Goblin Valley, but the rock layers almost looked the same. I scrambled a little bit around and discovered some nice looking hoodoos and rock formations. 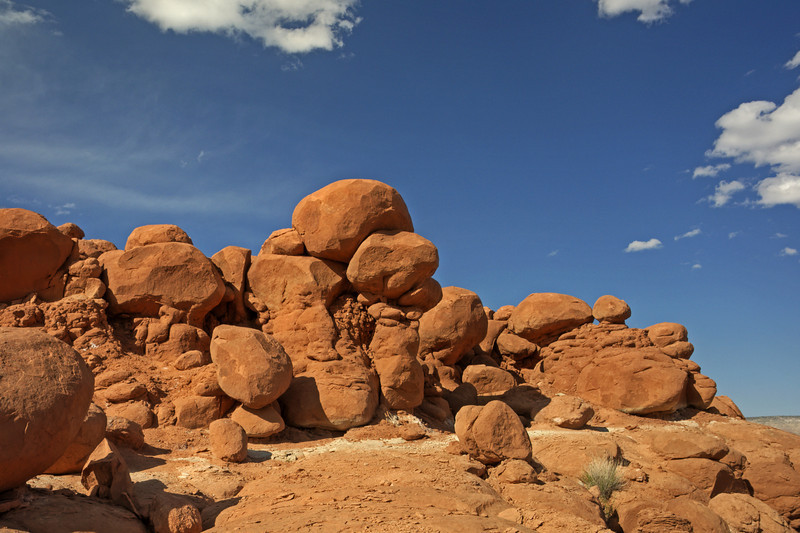 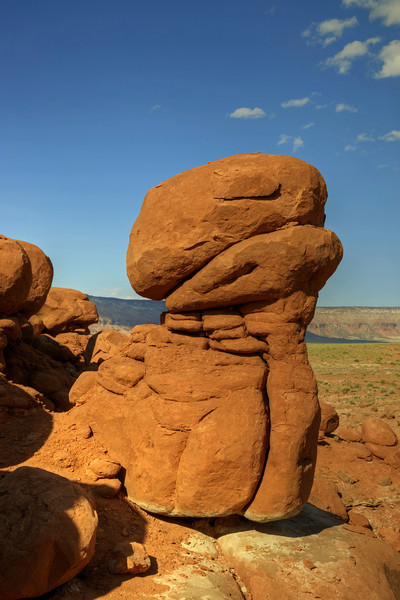 Now and then there were some Mule's Ear among the sandstone formations, really nice. 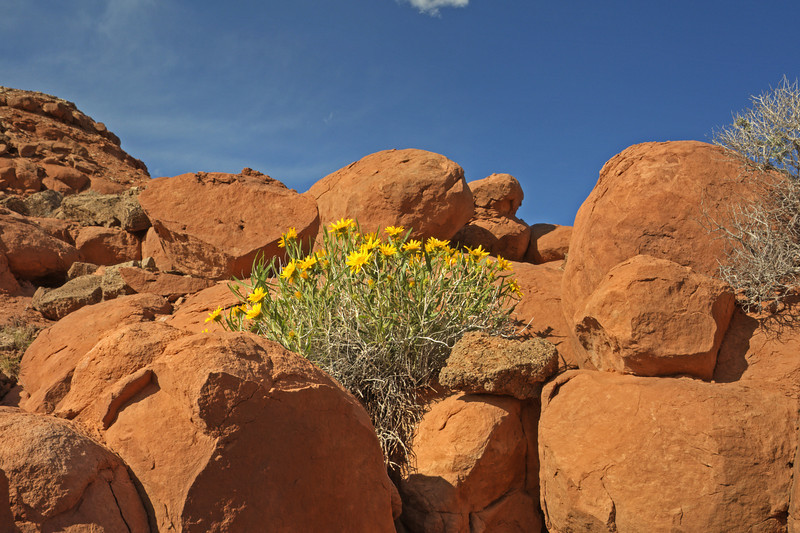 After a while I decided to head to Wedge Overlook, which was nearby and one of my favorite spots in the Swell. The big intersection to the Wedge was just beyond the Red Knoll and it took me only a few minutes to get there. My favorite campsite was already taken, but I found a similar one next to the rim a few hundred yards away. I quickly set up camp, just in time before sunset. So I crossed the dirt road and sat next to the rim where I enjoyed the setting sun. It was a perfect timing. 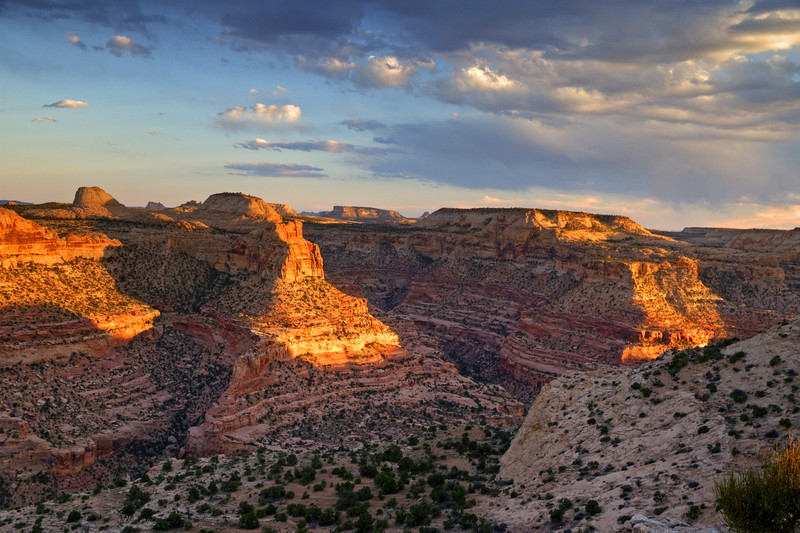 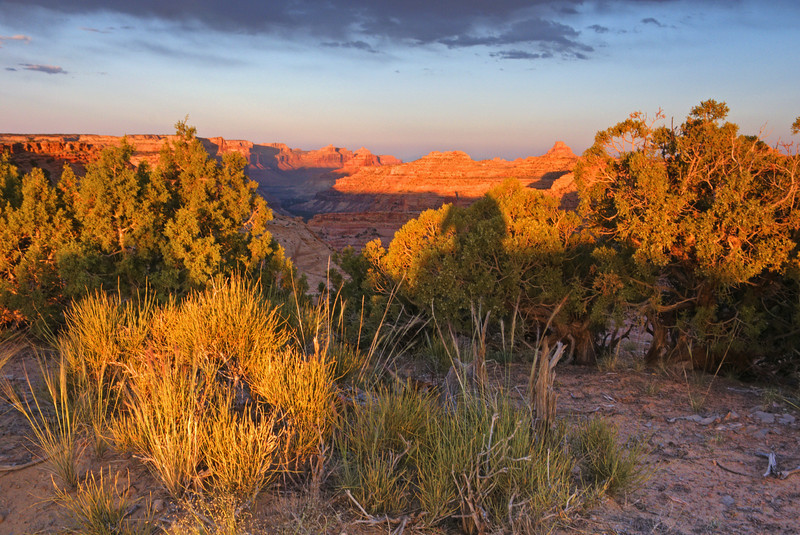 Very soon after sunset I had a campfire burning, cooked dinner and enjoyed the desert night. The stars were out soon and a more than half moon rose above the cliffs, illuminating evering in nice blue hues.
Despite the fact that the moon was washing out the sky a lot I tried my very first star trails. And the view into the canyon wasn't so bad either.
Some clouds were still left in the sky, so my first results weren't the best. 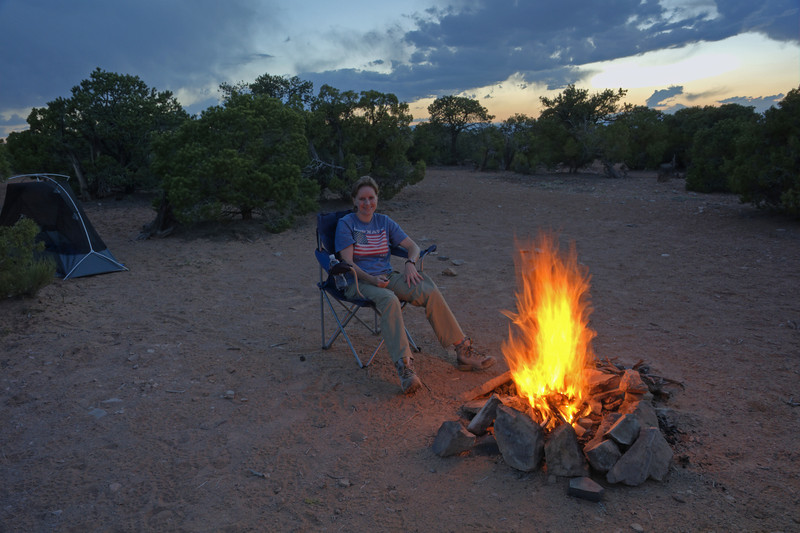 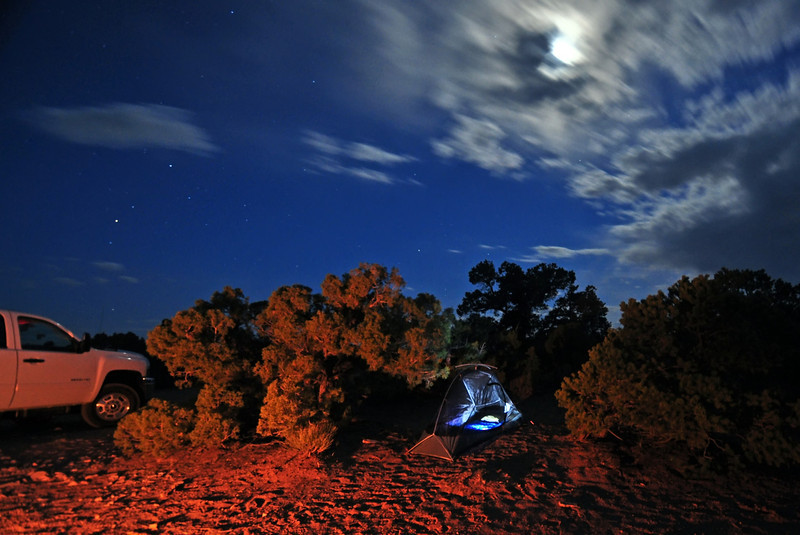 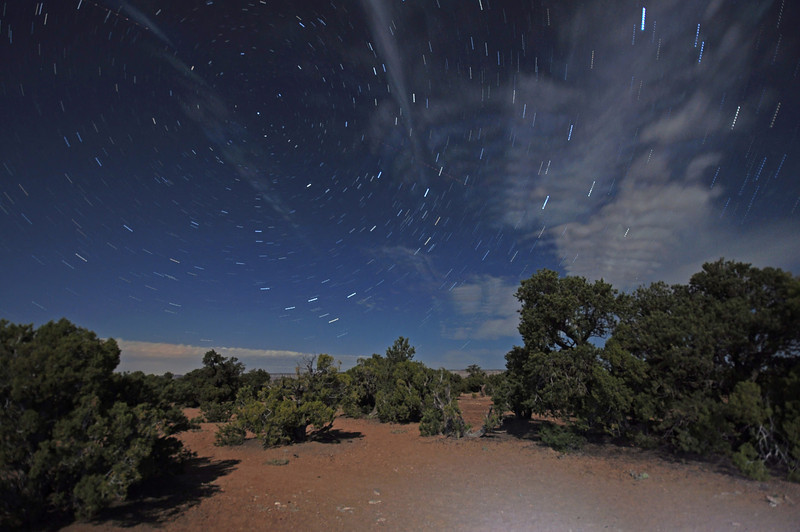 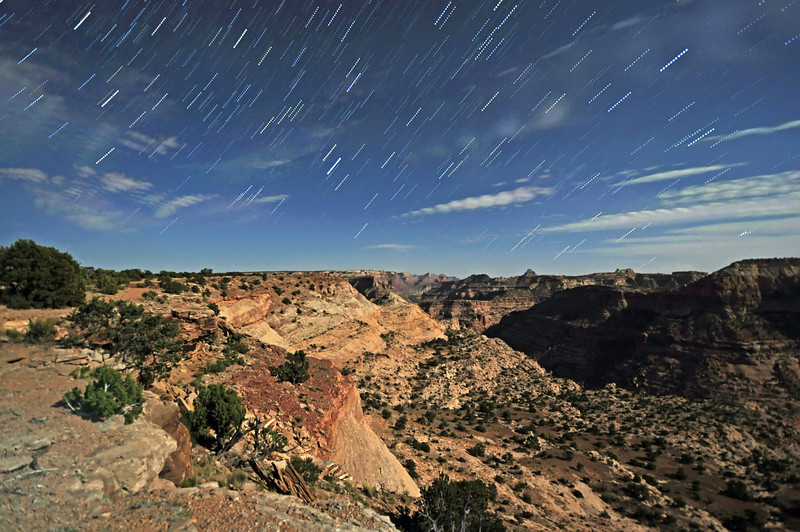 The night was nice and warm, and I enjoyed the morning view out of my mesh tent. But very soon the solitude ended and there was a lot of traffic and I stumbled into a wedding party. What a cool place to get married, lol.
So I left the Wedge and headed to Hambrick Bottom Road. I just wanted to drive a little bit and explore the area. My first stop was at the Hamburger Rocks, but I was too lazy to hike to the goblins nearby.
Everywhere I discovered a lot of wildflowers. 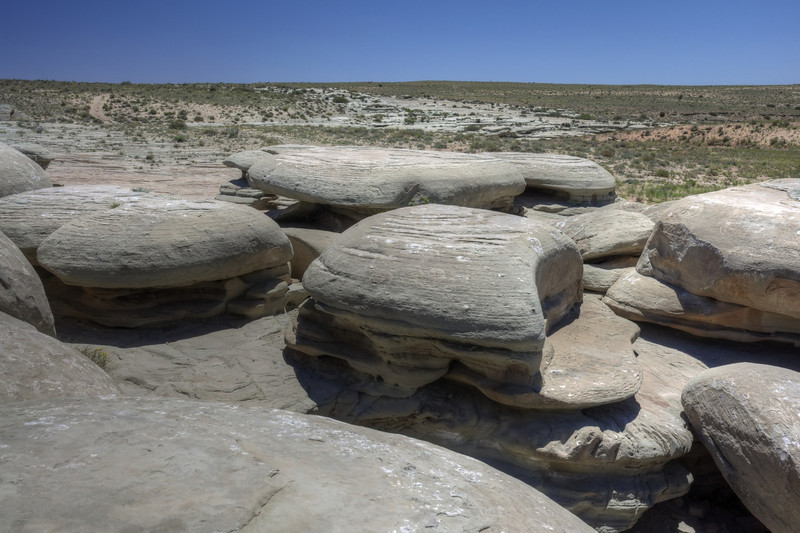 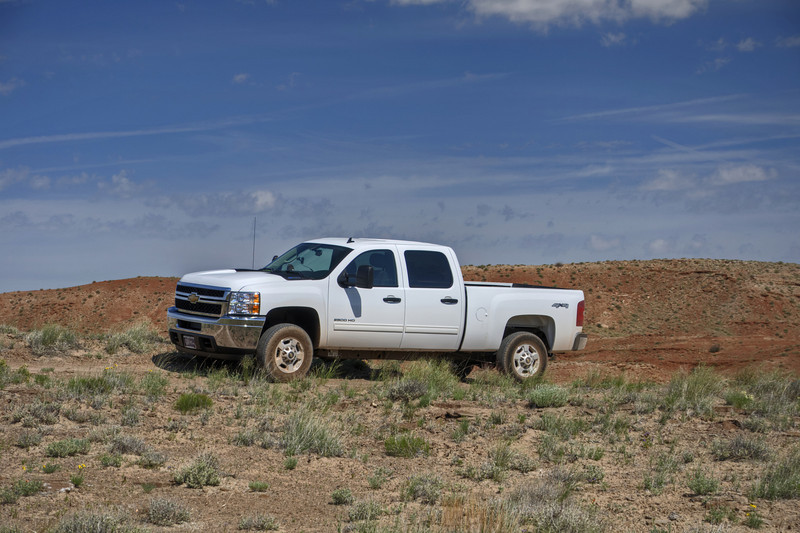 I cruised a while,discovered some spur roads nearby with nice camping spots and was finally stopped by a totally flooded San Rafael River. And it definitely looked not very inviting to cross. This was definitely the point to turn around and to head back to the intersection along Green River Cutoff Road. 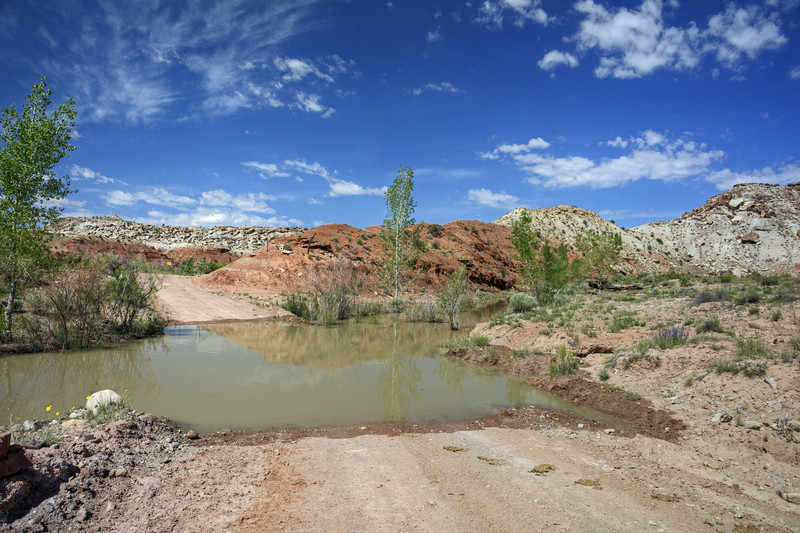 From there I drove Buckhorn Wash Road and stopped at the Pictograph Panel. 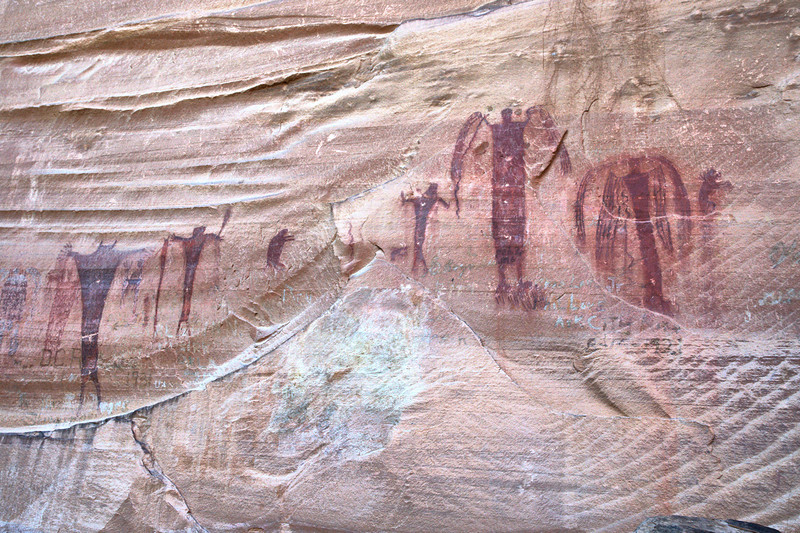 The part between the pictograph panel and the old Swinging Bridge crossing the San Rafael River was a nice one. The high cliffs on both sides looked impressive and offered wonderful views.
And I also noticed a lot of great camping spots.
I stopped at the Swinging Bridge and took some pictures as well as of Bottleneck Peak nearby. 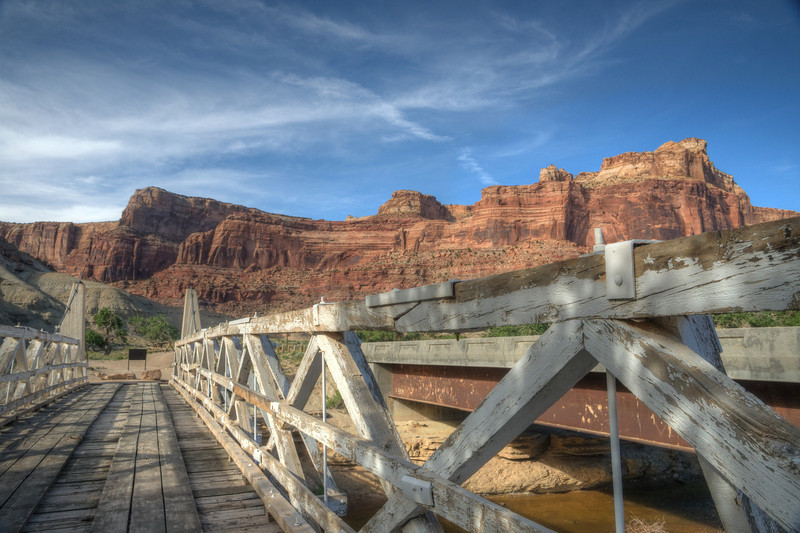 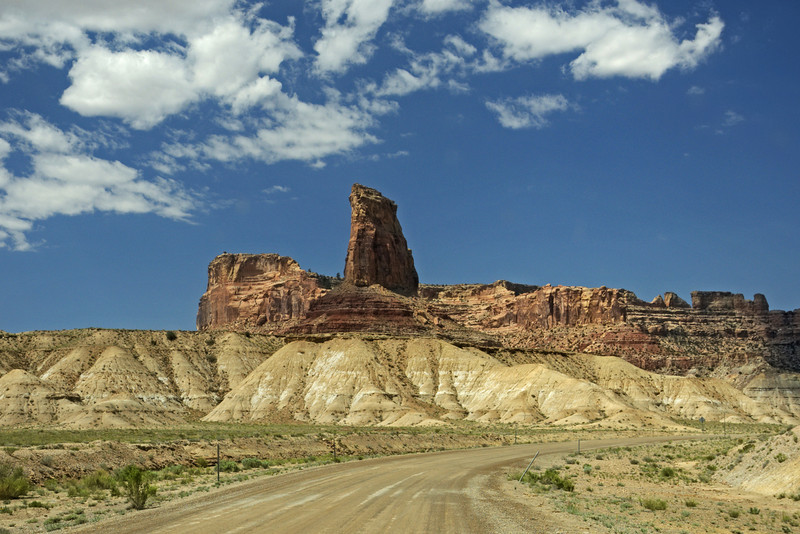 I headed south toward I 70 and took the underpass to Temple Mountain Road. I decided to drive Reds Canyon Loop again, a dirt road to warm up a little bit. But the views along that road were always
totally awesome. Almost every time I've driven Temple Mountain Road I saw some wild burros or feral horses, but today there was nothing, not even a Pronghorn.
Bad timing I guess and a lot of traffic.
After a while I turned into Reds Canyon and very soon the landscape got more spectacular.
First of all, the view toward Family Butte, then the nice descent into Reds Canyon with a great overall view. 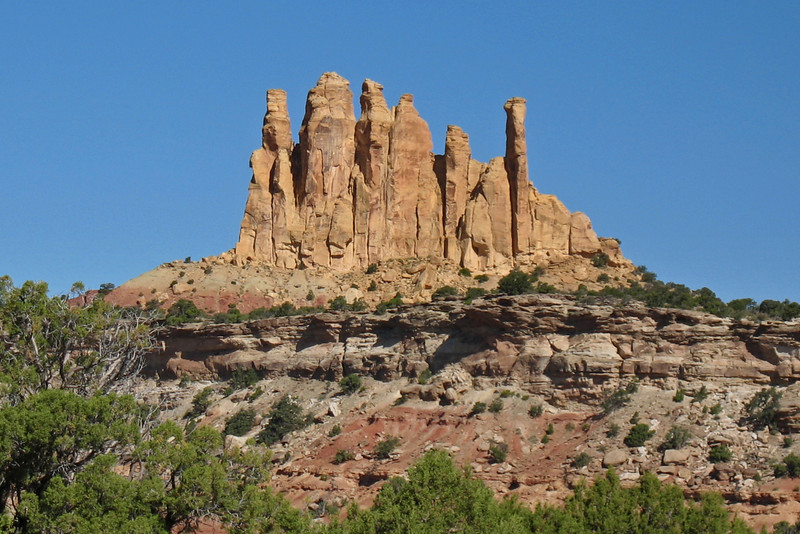 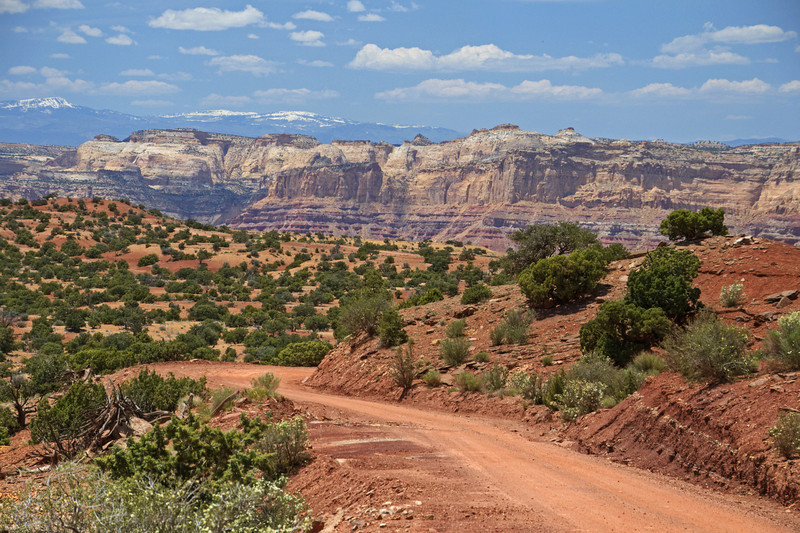 I took tons of pictures and stopped every hundred yards or so. Eventually I made it into the wash which was dry this time. Not a single puddle was left. The sandstone along the wash caught my eye like always whe traveling this loop. There were hoodoo- like formations and lots of Tafoni along the road to explore. 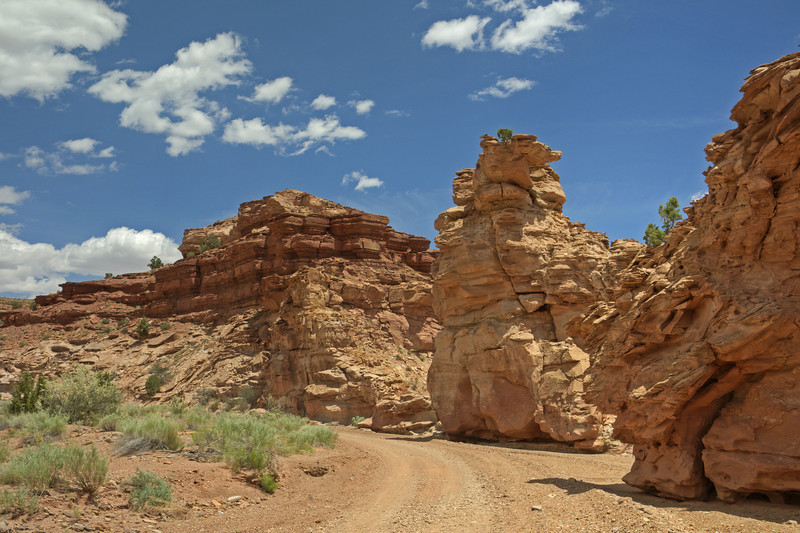 The next stop followed near Tomsich Butte and the old remains of that rusty truck. I would love to take pictures of it at nite.
One day eventually, with setting up camp near Hondu Arch. There are also a lot of those old mines to explore, but I only stopped near Lucky Strike for some pictures. 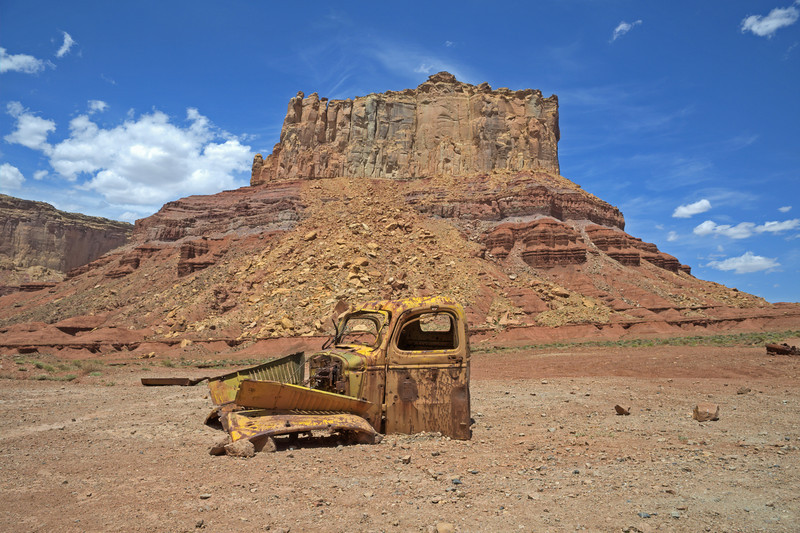 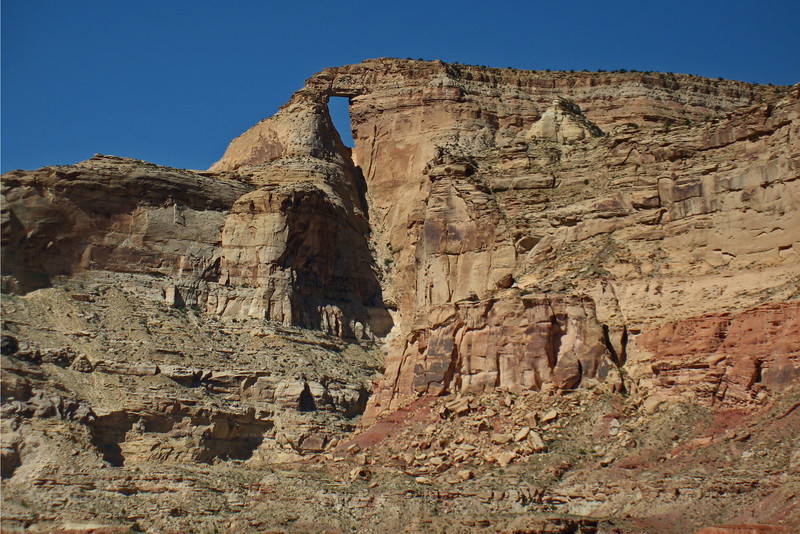 I headed back to Temple Mountain Road via McKay Flat Road and from there to Interstate 70 toward Moab. Because I wanted to meet with German friends tonight I had to cut short my Swell trip a little bit.
Otherwise I had spent another night camping nearby and eventually explored Crack Canyon, Temple Wash or something else. I definitely need to spend more time in the Swell, there are a lot of spots I left out because I was running out of time.

Another great trip report! I really need to do the Reds Canyon loop. I tried it once but the road was completely impassable a little beyond the turnoff to Lucky Strike. I've driven all over the swell seeing those little road signs with the Hondu Arch photo and still haven't seen it myself!
IG: @backcountrypost

ibenick said:
Another great trip report! I really need to do the Reds Canyon loop. I tried it once but the road was completely impassable a little beyond the turnoff to Lucky Strike. I've driven all over the swell seeing those little road signs with the Hondu Arch photo and still haven't seen it myself!
Click to expand...


Hondu Arch and Reds Canyon would make a great trip, especially with that nice camping spot at the end of the spur road near the arch.
And one day I'll go back and try to shoot star trails with that old abandoned truck nearby. It must be really awesome.

I can imagine how bad the road can be, but so far I was really lucky and during all my visits I had perfect road conditions.
http://yvonnebaurphoto.smugmug.com/ 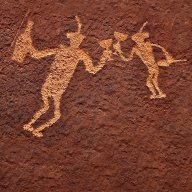 Interesting report and very nice pictures, thank you for sharing.

Last year and some years before, I planned to drive Reds loop and each time the day I planned it it was raining. Maybe I will be more lucky during a next trip !

Awesome report. Even though I go there a lot, it's so nice to see pictures of the place from other people's perspectives. Plus, there are many areas you pictured that I have not been and I'd like to go. Thanks for sharing.
"This is where my favorite quote will go someday" - Tyler

Intersting report and nice pictures, thank you for sharing.

Last year and some years before, I planned to drive Reds loop and each time the day I planned it it was raining. Maybe I will be more lucky during a next trip !


Philippe, I press both thumbs for you, there is so much to explore in the area.
Normally I'm a rain magnet, but in the Swell I was always lucky so far.


Tyler said:
Awesome report. Even though I go there a lot, it's so nice to see pictures of the place from other people's perspectives. Plus, there are many areas you pictured that I have not been and I'd like to go. Thanks for sharing.
Click to expand...


I always discover something new, especially when I see pictures posted by someone else from the area.
There is still so much to see, I just scratched the surface.
http://yvonnebaurphoto.smugmug.com/
You must log in or register to reply here.
Similar threads