After researching many routes I am pretty intrigued by death hollow. Some family members and I are headed to Utah to do Buckskin in two days but we're looking to do something after as well. Any suggestions for a 3-4 day route for five people in pretty good shape and two dogs? We're planning a trip around the 4th week of March.

I could be wrong but I think you may be a bit early for death hallow! I'm sure a couple others will pipe in. Another suggestion could be something down hole in the rock like coyote gulch, etc.

Personally I would avoid any route where you spend the majority of your time in the water that early in the year. You'd be looking at some pretty high water and frigid conditions.
http://www.lisakellyphotos.com/

No dogs allowed in Coyote and the water can still be pretty cold, by day 3 on my mid march trip I was doing every I could to avoid the water. Things don't really green up until April so the canyon has a dead winter type feel to it. I couldn't imagine doing death hollow during high flows that time of year either, it seems like the flows would be high and very cold. Nick, whats the earliest you've done it? I've heard that buckskin can hold ice for quite a while in the dark sections.....

In terms of Buckskin, it really depends on the year. Last year I went down Buckskin and back up the Paria to White House during the first weekend of April--a week after the OP is planning on--and it was just fine. Buckskin was a bit muddy, but only had knee deep water. The Paria was very chilly, but warmed up significantly by mid-day (plan on bringing and needing neoprene socks). This year could be completely different though--you could end up with chest deep wades at any time in Buckskin, which wouldn't be fun at all in late March. By the time you go there's a good chance there won't be any new beta for current conditions--so you might be going in there not knowing what you're going to find. Probably be a good idea to have a backup plan, just in case you hit it when it's "full".
www.timothypluta.com

I've been in Death Hollow in March, April, May, June and September. The odd thing is, the water level never really changed, even comparing the peak of spring when the Escalante was a brown torrent to mid September when the Escalante River was actually bone dry for a part of the hike. The water in Death Hollow stayed quite similar. I'm sure it peaks a bit with runoff, but it wouldn't be in March. Probably late April to early June when the high elevations on Boulder Mountain are melting fastest. My trip there at the end of April in 2006 was definitely the highest runoff out of all of my trips.

Like others have said, Death Hollow isn't an ideal destination in March. It's certainly doable, but it won't be nearly as enjoyable. It is an aquatic paradise and pretty much all of it is spent walking in the river. It's really, really good when it's hot! And depending on conditions and what winter is like, it might not even be possible in March. Last year was a very mild winter and Cody & Don did the air strip to Hwy 12 route through Death Hollow in late March, photos on FB if you are friends with Cody. But if winter is a rough one, like it has been this year, there could be significant snow and ice in the shaded bends which would make it very difficult. Just for reference, check out all the ice we ran into on the Escalante on March 17th, 2006: 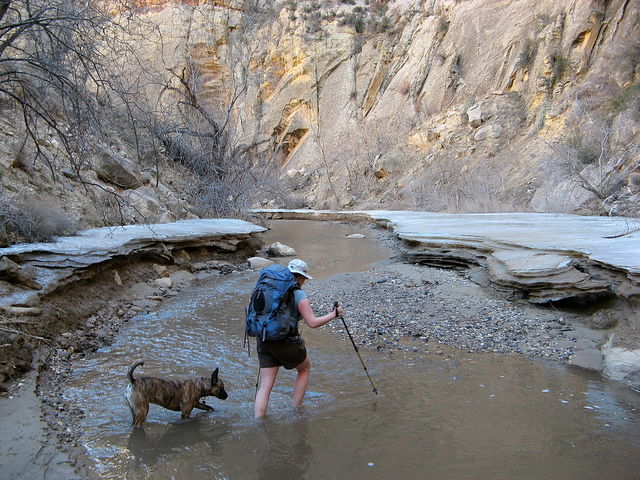 Due to the narrowness and flow, similar conditions in Death Hollow could make for a very bad experience.

If I were doing 3-4 days in the area in late March with dogs, I would head down Hole in the Rock and do the lower canyons. The climate difference between lower Hole in the Rock road and the town of Escalante is significant. There is nearly 2000 feet of elevation difference between something like Death Hollow and something like Davis Gulch or Fiftymile Creek making that area much better for early spring adventures. As Bill said, Coyote is closed to dogs, but Scorpion Gulch, Willow Gulch, Fiftymile Creek or Davis Gulch would all be good options. Scorpion might be one of the best options as it has a good amount of overland approach and depending on your route, one dry camp that would be made much easier with mild temperatures.

Fiftymile and Davis Gulch can easily be combined to make a 3-4 day trip or do one of them and spend a day hiking down Hole in the Rock to Lake Powell. It's a fantastic area in that last 7 miles of the road. I'm probably heading that way myself in mid-March.

Willow Gulch is a little short for a multi-day backpack if you aren't combining it with Fortymile, and I wouldn't recommend Fortymile Gulch that early in the year.

So I think I'm a bit confused, are you doing Buckskin in March as well or in two days from now?
IG: @backcountrypost
J

We will be entering buckskin on march 22, and then looking to do a 3-4 day trip after that. We are NOT heading to buckskin in two days from now!
You must log in or register to reply here.
Similar threads