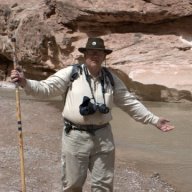 This is from a few years back, but still relevant, I hope.


This is a relatively easy hike along the Escalante River through some very beautiful scenery. I went with the boy scouts on this one last June. The upper trailhead is just outside the town of Escalante and the trailhead at the other end is by the bridge where highway 12 crosses the river at Calf Creek. You can do the hike in a day, but it's alot of walking and you wouldn't have much time to explore or enjoy the scenery. Most people do it in two days. We took three.

You will need to register for a backcountry permit at the interagency visitor's center in Escalante if you are planing on staying overnight. You should also be prepared to utilize Leave No Trace principles, which in Escalante Canyon includes no open fires and pack out your toilet paper.

The hike divides easily into two parts of roughly equal length: 1) from Escalante to the Death Hollow and 2) from Death Hollow to Calf Creek.

For the first part, the canyon is much narrower than further down and the stream is much smaller. I suspect the main reason is that much of the water that used to flow down the Escalante here is now siphoned off for use in the town of Escalante.

There are at least three native American pictograph panels located in the first two and half miles of the hike. The first is located just over a mile in, on the north side of one of the big loops the river makes. Look for a couple of large trees on the west side of the stream and you'll see a clear path from there to the cliff face where the petroglyphs are carved. There are at least two spots here with pictographs, so look around and be sure you see both. Look behind the brushes growing next to the clearly visible panels as there are some carvings that are hidden. 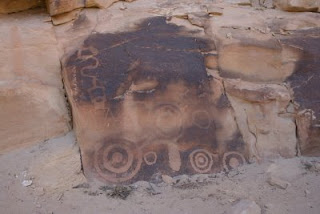 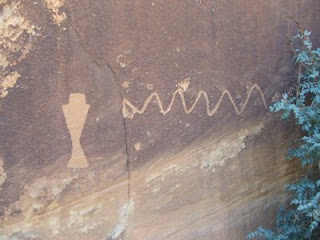 The second site is located downstream on the next loop in the river, at almost the exact same spot in the loop, the northwest. This one is smaller and has some more modern additions. 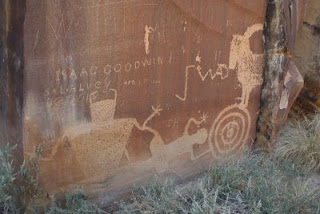 The third site is located two more bends down the river in a huge alcove on the north side of the river. It's impossible to miss. This alcove is so big and so obviously a great shelter, you wonder why the Anasazi didn't build a big complex here like they did at Mesa Verde. On a follow up hike just after Thanksgiving with my family, I discovered at least a partial answer. This site gets no direct sun in the Winter.

The pictographs here are in pretty bad shape and look to have been restored at some time. The more you look around the more you can tell that this site used to be covered in graffiti, but it has been scrubbed away. Who knows what other Fremont or Anazai pictographs were here before the graffiti was scawled all over? The main art is a series of four figures linked arm-to-arm at the back. It is unmissable. There are some other figures a few feet to the left and some very small ones on the wall at the far right in the back of the alcove. 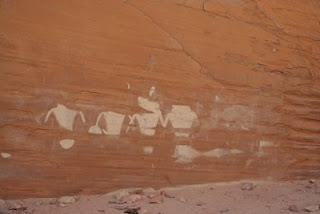 The other interesting thing here is the hard sand that forms the floor of the alcove. Where it drops off into the stream bed people have carved all sorts of faniciful things into the five-foot high sand cliff. 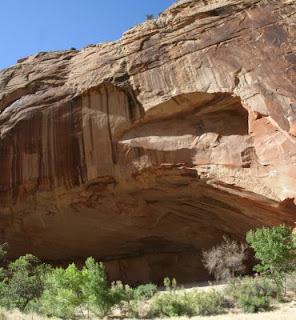 ​
The alcove from across the river and slightly downstream​

This is a good place to camp if you have the time. If you are trying to do the hike in two days, you should keep on hiking. The water in the river slowly dwindles and completely disappears a few miles below this site, so your next best camping spot is at the mouth of Death Hollow. The spot marked on my map above with the red circle had no water, so don't plan on camping there.

The hike from the alcove to the mouth of Death Hollow is 4 to 4.5 miles and the section about a mile upstream from the confluence is especially impressive. The hiking is easy all along this route, but especially so here since there is no water in the riverbed.
Be sure to take some time and hike at least some small distance up Death Hollow. The banks have patches of poison ivy, so your best route is to walk up in the middle of the stream bed. The canyon is very spectacular and it would be a shame to miss it after coming all this way.

The hike from Death Hollow to Sand Creek is a bit harder, but still not very hard. The biggest impediment, if you are backpacking, is the river crossings. The river is no longer dry and its not a little stream you can jump across like it is at the begining of the hike. Plan on getting your feet wet. The banks are steep and very sandy. Going down is easy, climbing up the opposite bank is a real pain. Most people give up and just hike along the stream bed. It's slower going and the loops in the river make it longer, but its much more pleasant, especially if you are in no particular hurry.

Two and half miles downstream from Death Hollow, the river makes a big southern loop. The south side of the canyon is a towering sheer cliff, and the river bottom is covered with trees growing in soft white sand. This would make a good campsite if you were on an extended trip. 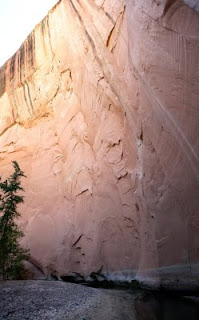 Another mile below this Sand Creek joins the Escalante from a canyon to the north. The canyon is much wider here and the trail is well-defined. The hiking is easier on the trail than in the river. About a half mile below Sand Creek there is a huge natural arch on the south wall of the canyon. To the east of this is an alcove in the cliff high above the canyon wall with several Anasazi cliff houses in it. This is also a good place to camp. 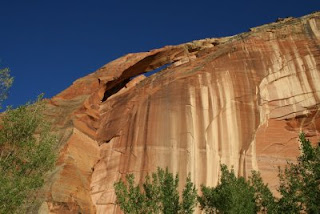 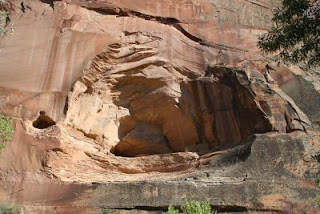 Another half mile downstream from here, hidden in shadows on the south side of the canyon, is Ecalante Natural Bridge. The shadows make it difficult to photograph, but it is easy to see and you can walk up underneath it with a little effort.

This is a fun hike through some spectacular country and it's relatively easy with not much up and down. You could spend days exploring here if you wanted to.
"Let me be a free man, free to travel, free to stop, free to work, free to trade where I choose, free to choose my own teachers, free to follow the religion of my fathers, free to talk, think and act for myself — and I will obey every law or submit to the penalty." -Chief Joseph-
You must log in or register to reply here.
Similar threads