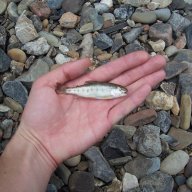 I had originally planned to do a quick overnight trip and visit East Slide Lake and Gates Lake in the Lake Fork Drainage of the Uintas. However, my wife wasn’t too keen on me doing a solo overnight trip. So, we reached somewhat of a compromise where I would day hike into East Slide Lake. East Slide Lake is one of the only lakes on the east side of the drainage and relatively inaccessible. The old DWR handbook describes it as a “true wilderness lake.”

The trail starts at Moon Lake. It seems a little bit strange that the trailhead starts about midway along the lake, and the first half a mile or so passes by the main Moon Lake camping area. A little weird and anticlimactic to be passing someone’s reserved campsite after you’ve already been hiking for 5-10 minutes. I think the reason for the trailhead location is that the much more popular Brown Duck Basin trail breaks off to the West shortly after the trail begins.

This is a picture looking back at Moon Lake about a mile from the trailhead (sorry for the picture quality... good old point and shoot. It's also more hazy from the smoke from one of the Utah fires settling into the area). 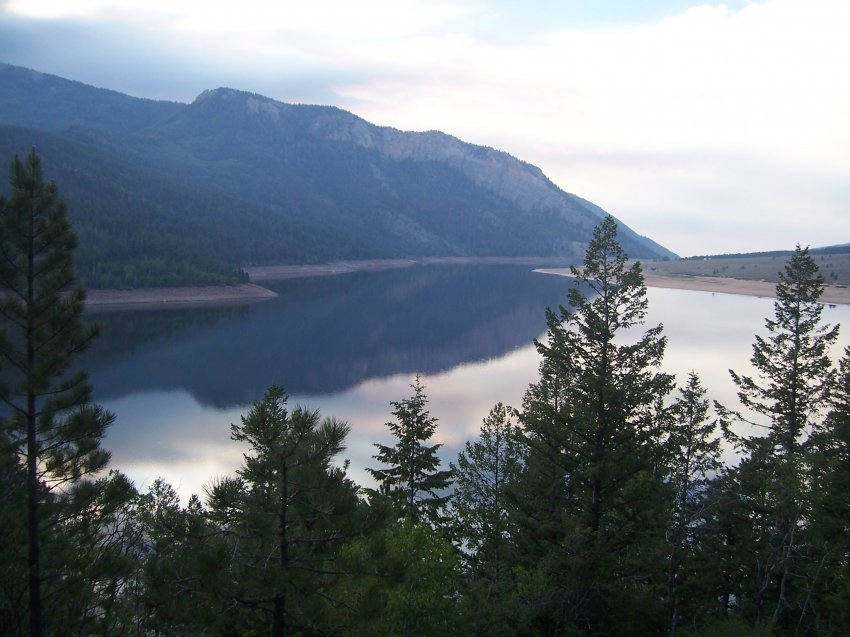 A look at the Lake Fork River above Moon Lake. It narrows into a steep gorge for much of its path further up the trail. 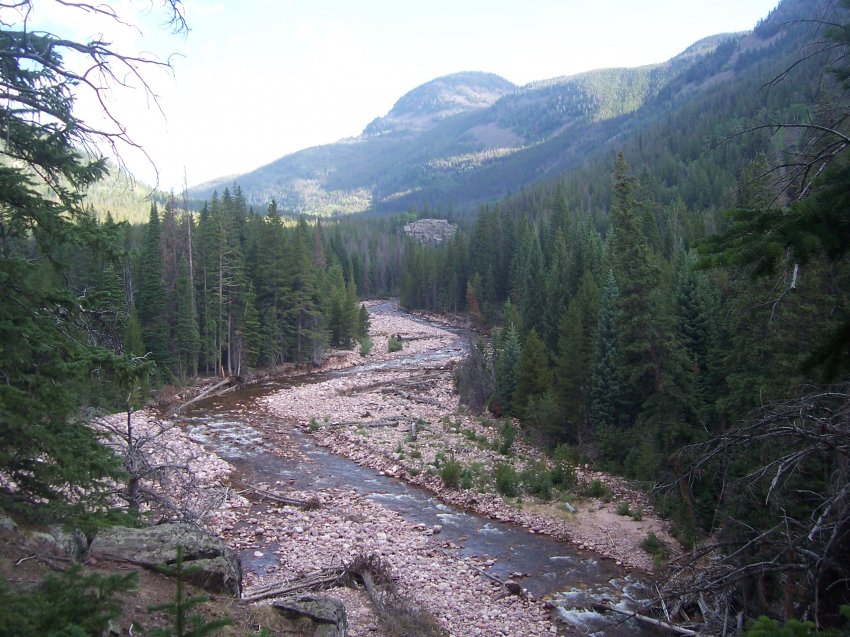 The initial part of the Lake Fork trail is not that difficult to traverse. Other than the occasional fallen tree across the path, the trail is pretty well groomed and only rises about 1000ft over the 1st eight miles. Not a lot of boggy areas either (maybe that’s just the dry year?). The last mile and a half to reach East Slide Lake is the tricky part. My original plan was to hike to the confluence of the Oweep and Lake Fork Rivers, follow the Oweep River briefly, and then climb the relatively steep slope to the lake. I thought it was a little strange when I passed a couple of rock cairns about ¾ of a mile from the confluence without any obvious trail branching off. I’m used to cairns marking spur trails, but I knew of no other trails that were supposed to branch off in this location. So I just kept hiking. I knew from the topo maps that the area where the rivers came together had some steep slopes, but I was sure there was probably an area to drop into and out of the river gorge without too much difficulty… nope. At the confluence, the gorge was basically 60-100ft cliffs on either side. No way across here. It was then that I realized that the cairns probably marked the most suitable gorge crossing. So I backtracked, and sure enough just after the cairns there were a couple of areas (although still pretty steep) where one could traverse the gorge safely.

After crossing the gorge, it was basically picking your way along the steep slope into the small drainage between two peaks.

East Slide is nestled between these two peaks. 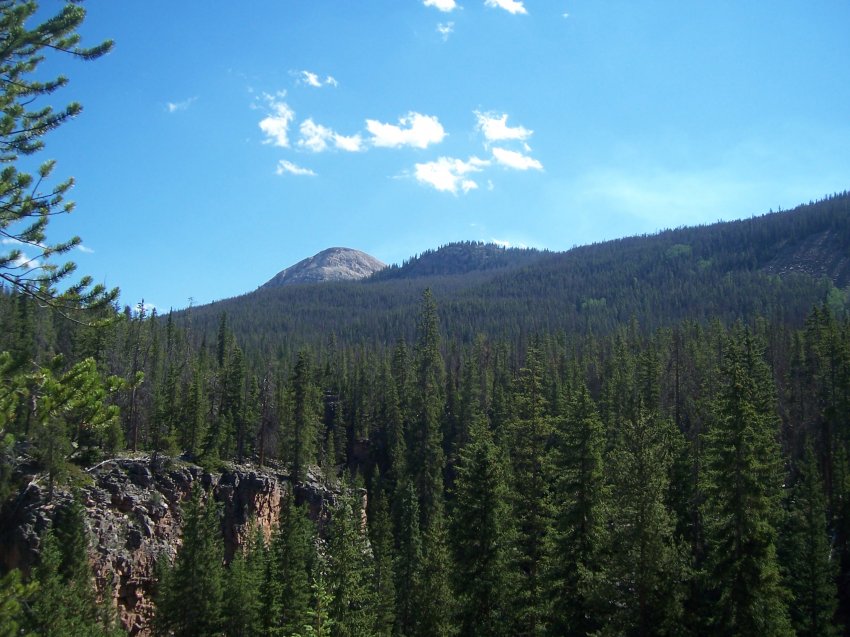 Apart from sporadic segments of game trails, there was no discernible “standard” trail to the lake. Not even the occasional pink or orange ribbon tied to trees to mark a suitable path that I’ve encountered on several other less frequented trails in the Uintas.

East Slide Lake itself is only about 5 acres in size. A couple of views of the lake. The first looking East, the other from the other side looking west. 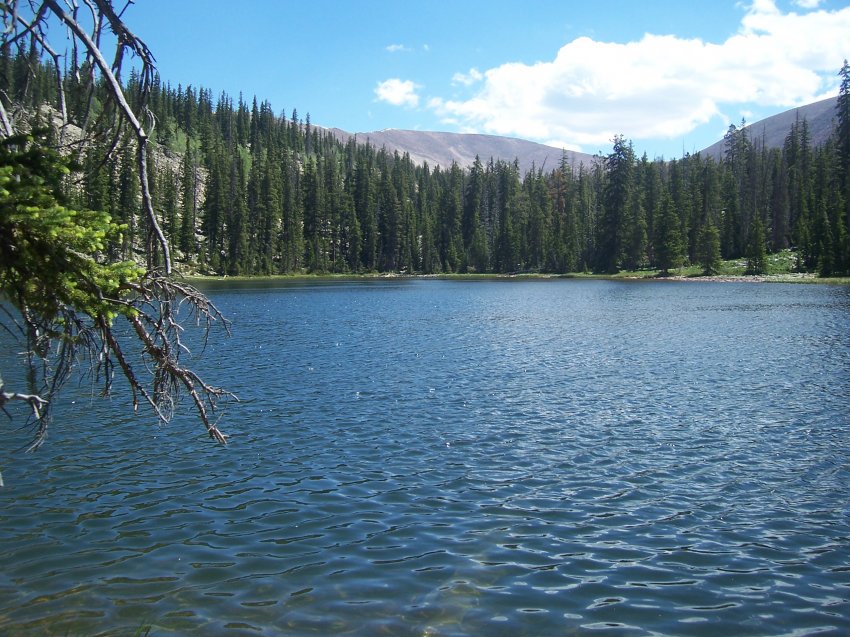 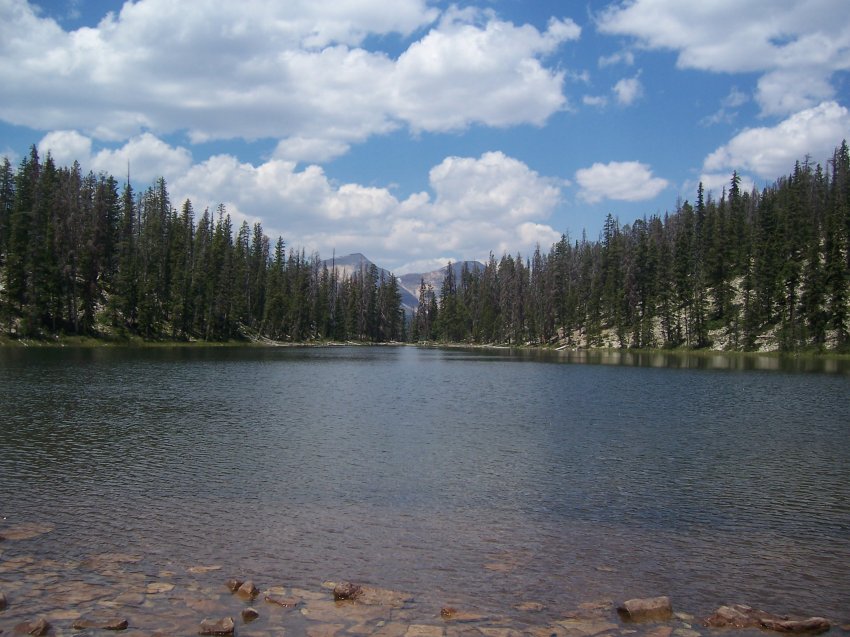 I saw much less evidence of human activity than I am used to at most Uinta lakes (I only saw 2-3 pieces of lakeside trash, and one old firepit around the circumference of the lake). While at the lake I heard a few rocks falling from the high cliffs along the southeast side and was pleased to spot a few nimble mountain goats traversing the high ridge.

If you look very (emphasis on very) carefully at this photo, you can see the mountain goats. I waited till they were just about crossing the dark portion of rock. There was actually a baby goat trailing his/her mother along the cliffs (I think he/she is just behind the most easily visible goat in this photo). 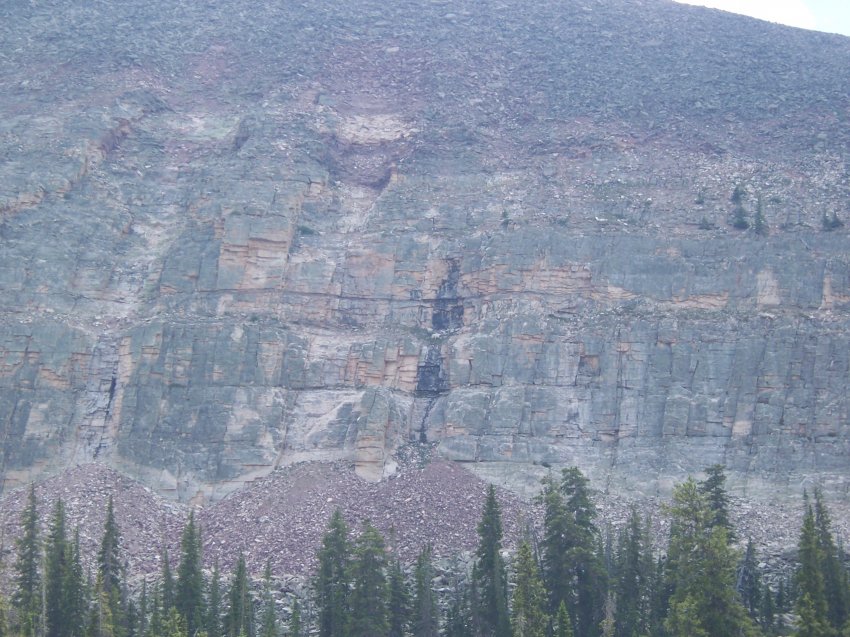 The lake also had some decent Brook trout inhabitants. 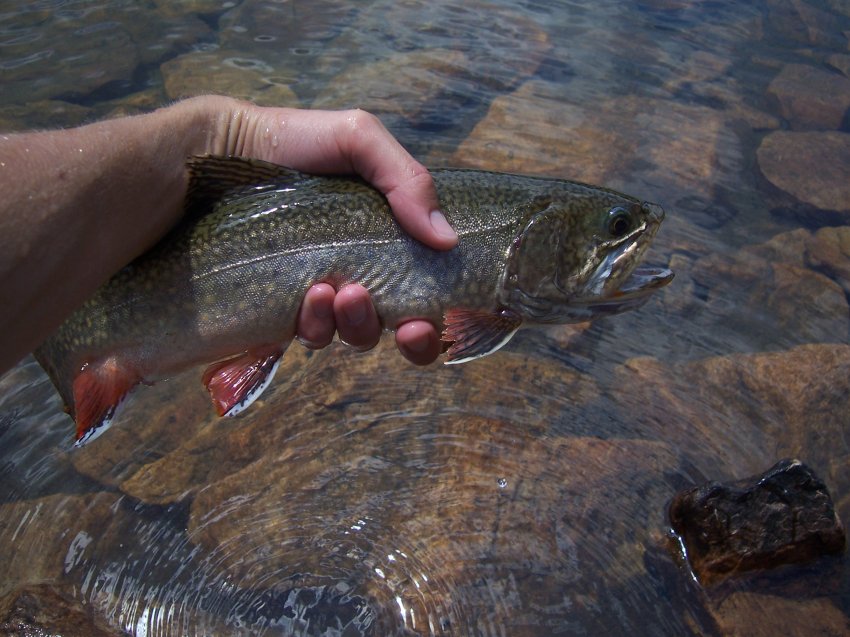 After a few hours at the lake, I made my descent back to the main trail. The hike down was marred by hazy skies, worsening the farther down the canyon I traveled. It seems that one of the Utah fires was allowing smoke and haze to settle into the canyon. Although it may have kept things a few degrees cooler by blocking some of the sun, it definitely diminished the views to the beautiful peaks and surroundings I so much enjoy in the Uintas.

On a side note, I only noticed a handful of mosquitoes the whole day… much different than the hundreds that attacked us the following day at a brief overnight campout with my family at Fehr Lake just off the Mirror Lake Highway.

After starting the day just before 7am, I arrived back at the trailhead around 6:30pm. I would have much preferred to stay overnight so I could have also visited the relatively nearby Gates Lake. I guess it just leaves me with the excuse to make another trip

If anyone ever wants to tag along and take some decent pictures... feel free.

Fantastic first trip report, Zep! Welcome to backcountrypost! That looks like a nice hike. I haven't been very compelled to explore into the southern drainages but perhaps I should think harder about that. Great looking brookie too! Sad that you had to hike all the way back out same day though. Maybe you could pickup an InReach or a Spot to make the Mrs feel at ease? And if you ever want to connect and get out on a trip, I'm always looking for backpacking partners. I tend to get out way more than any of my friends will. Details on that here.
\
Follow me on IG: @backcountrypost
/

nick said:
Fantastic first trip report, Zep! Welcome to backcountrypost! That looks like a nice hike. I haven't been very compelled to explore into the southern drainages but perhaps I should think harder about that. Great looking brookie too! Sad that you had to hike all the way back out same day though. Maybe you could pickup an InReach or a Spot to make the Mrs feel at ease? And if you ever want to connect and get out on a trip, I'm always looking for backpacking partners. I tend to get out way more than any of my friends will. Details on that here.
Click to expand...


I've actually got a Spot (and use it). That may have been the only reason I got to go at all. Next time I'm in Utah/Uintas and can't find a backpacking partner, I may let you know.

Excellent TR with good looking brookies! Well Done!
www.simpleweekends.com
You must log in or register to reply here.
Similar threads