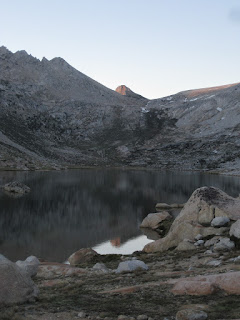 In mid-June at 10,200 feet, Roosevelt Lake was a wonderland. And it was also wondrously full of close encounters of the flying kind. The mosquitoes were so bad that we were not only wearing insect repellent, we were also fully clad in headnets. 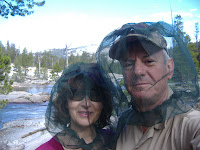 And after enjoying a stunning sunset and the alpenglow on the peaks, we were ready to escape the bugs in the safety of our tent. We nimbly ducked through the mosquito netting and zipped it up quickly and carefully behind us.
P settled into his bag and closed his eyes. It had been a long day of off-trail hiking, and he was ready to sleep. M was soon to follow, and there was a wonderful stillness in the tent as she lay down to rest.
And then she sat up again.

"There's a mosquito in the tent!" she cried.

P tried to rest as she pulled out her headlamp and started scanning the tent for the offending skeeter. As he opened his eyes, P saw the beam of the headlamp slowly panning across the ceiling of the tent without success. 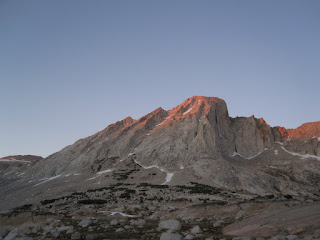 He surrendered, and pulled out his own headlamp and added it to the search pattern. Quietly, out of the side of his mouth, he began to make the slow, mournful siren of the air raid horns from London in the Second World War. The searchlights continued to pan across the ceiling in a random pattern.

"There it is!" M called out as she took a swipe at the MO-109 flying mosquito. She missed.

"Got it!" she said happily, as the bug got squished against the netting and fell slowly out of the sky. We only missed the sound effects of the tailspin as it went down.

The searchlights went off. The siren signaled the all clear. And we settled in for a quiet night's sleep, protected against the enemy by a thin wall of gauze.
Check our our website: http://www.backpackthesierra.com/
Or just read a good mystery novel set in the Sierra; https://www.amazon.com/Danger-Falling-Rocks-Paul-Wagner/dp/0984884963

When the mosquitoes figure out rocketry, we're done for.
You must log in or register to reply here.
Similar threads