I had permission to get away for 4 nights over my spring break. The weather looked cold and dry in the Dolly Sods, so I decided to head back there with the hope of nice views and some stars. I assumed that FR 75 was gated for the winter and I did not want to ford Red Creek from the south, so I decided to enter from the west side via Cannan Valley Wildlife Refuge.

I parked at the bottom of Cabin Mountain at the first parking area in the Refuge since I was sure what the rest of the road was like. It was a pleasant walk in the sun, but I could have parked a little further up the road. 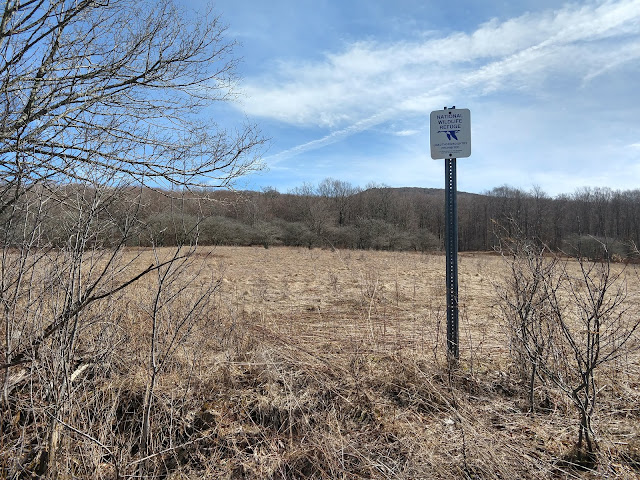 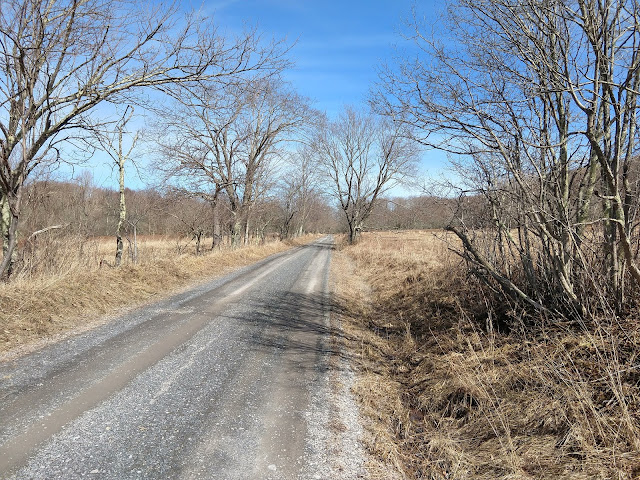 Higher up, the road is blocked and turns to trail as you enter the actual Wilderness area
. 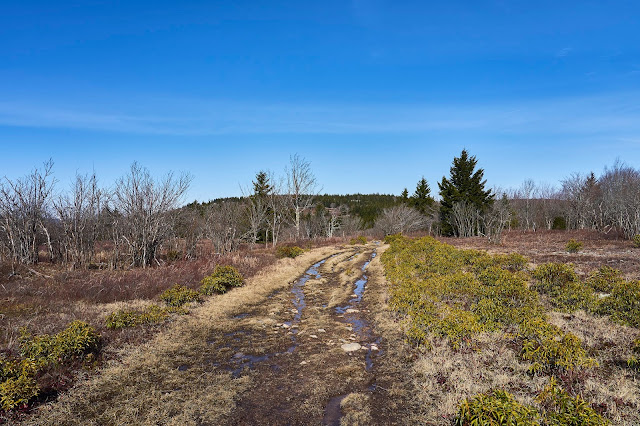 I had decided for the first night to head north and camp somewhere along the Dobbin Grade Trail, so when the old road ended, I continued on the Rocky Ridge Trail. Unfortunately, the wind was gusting in the 30 - 40 MPH range and it was about 30 degrees, so cold and uncomfortable. I did not linger on the ridge for long. I passed one woman walking her dog, I assumed she hiked up from the houses below the ridge.

I got to where the trail crosses the Left Fork of Red Creek and found a place to set up and hopefully be out of the wind a bit and still able to see stars. 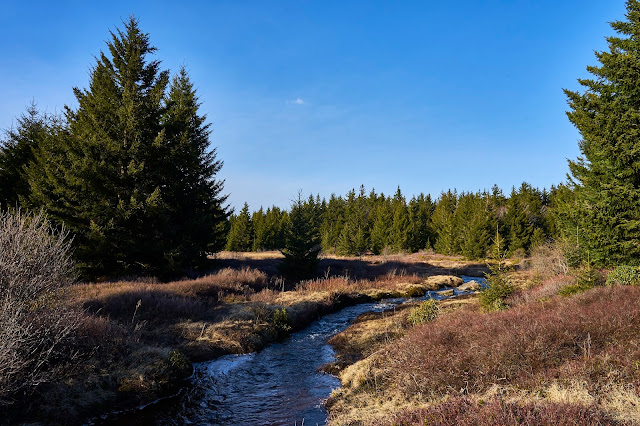 The sunset was nice, but the clouds got thicker, the wind got higher and I decided to crawl into my tent on the early side. 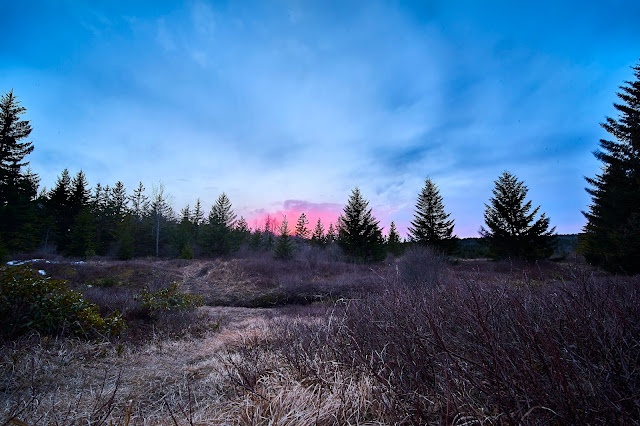 Next morning I woke up to another beautiful, but very windy day. A little bit of exploration in the area for future trips and I found this weird "artifact", no idea what it is/was. 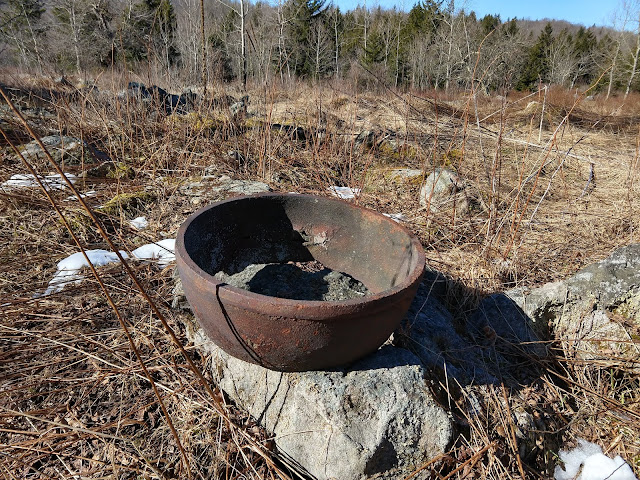 Up onto the ridge via the Beaver View Trail, it was very windy with gusts about 40mph. I ended up hiding behind a large tree for lunch and decided that I would head south to a more protected area for the night. 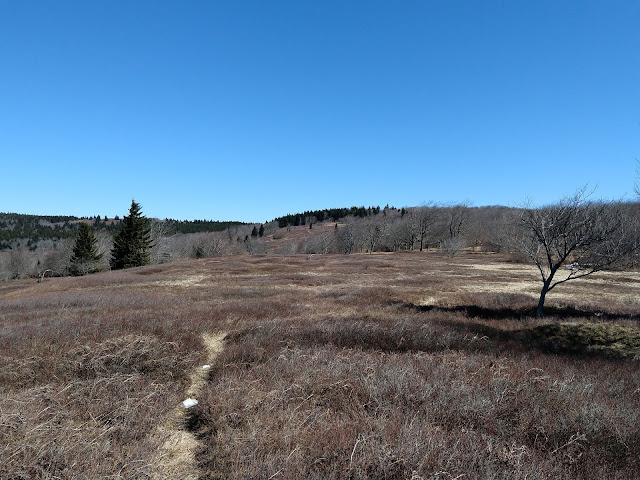 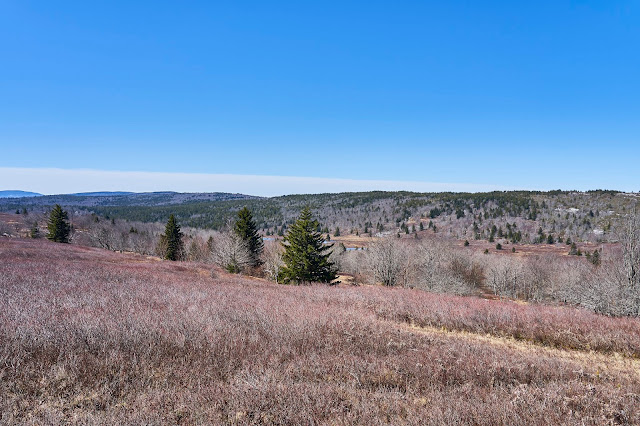 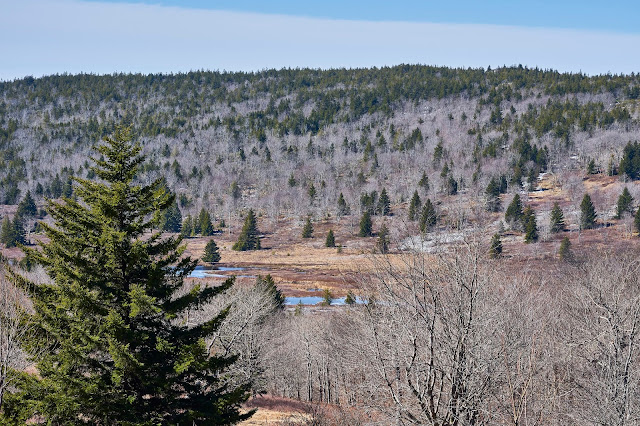 You can see the ice on the trail, I was glad at times that I had hiking poles to keep from slipping too much. Unfortunately, I could not avoid the water today and my feet ended up pretty wet. Normally I don't mind, but I had a new pair of socks and they did not dry as fast as my usual ones do. I ended up with blister on both feet that were pretty uncomfortable. 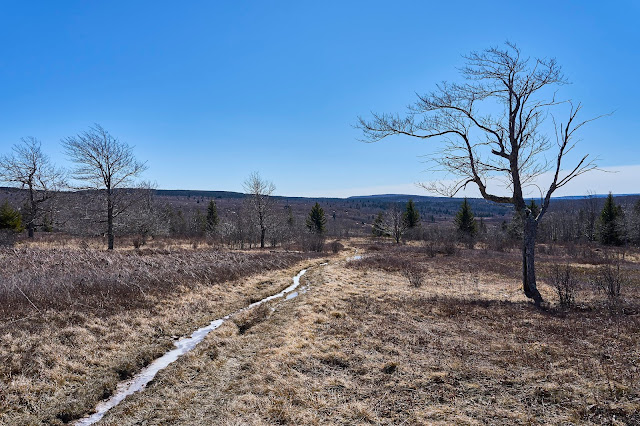 So after lunch, I continued on the Beaver View Trail to the intersection with the Raven Ridge Trail and then followed that south to the Upper Red Trail and on to the "forks" area on Red Creek.

I aimed for the "forks" area, knowing it would be a little more sheltered, but still allow views of the sky. When I got there, I set up camp and went to look for firewood. Someone must have been really bored, because there was a huge amount of processed wood near one of the fire rings. 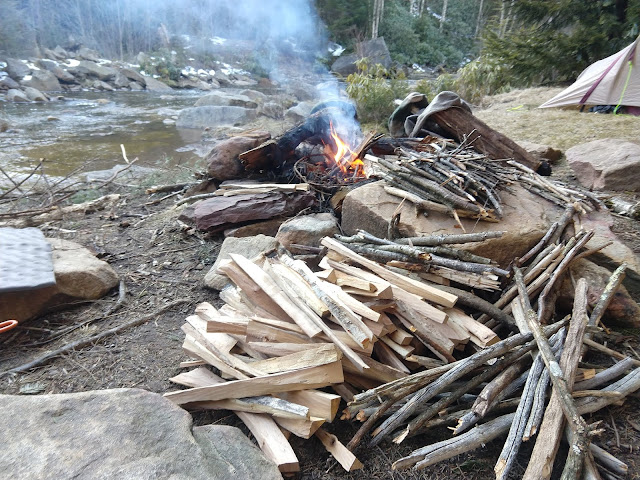 I also found a beer, with a relatively recent (~6 months) bottling date. It did not look like it had ever been opened, so I assumed it was left for me. Luckily I have a small bottle opener in my first aid kit, so I was prepared and the beer tasted great. 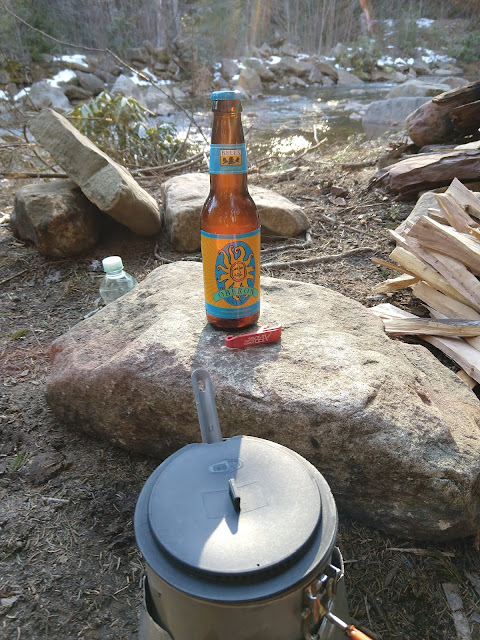 I took some photos of the creek and generally just relaxed and then started a fire with all that nice wood. 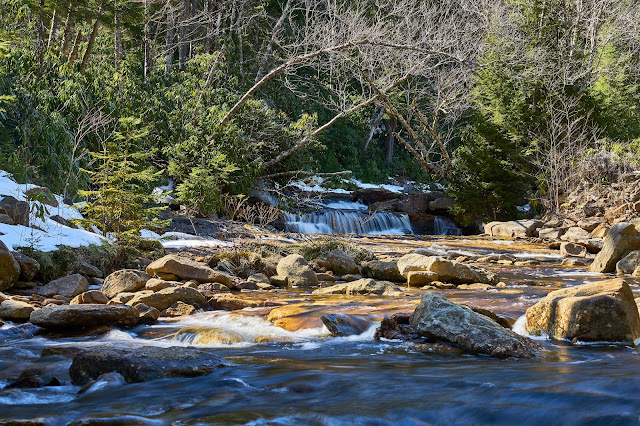 Right around the corner from my campsite. 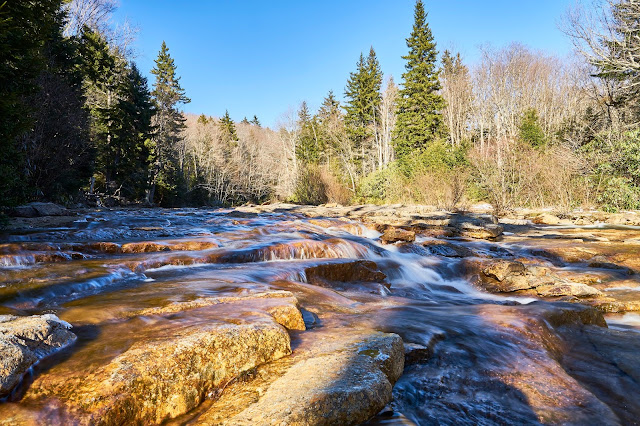 Crescent Moon while waiting for the stars. 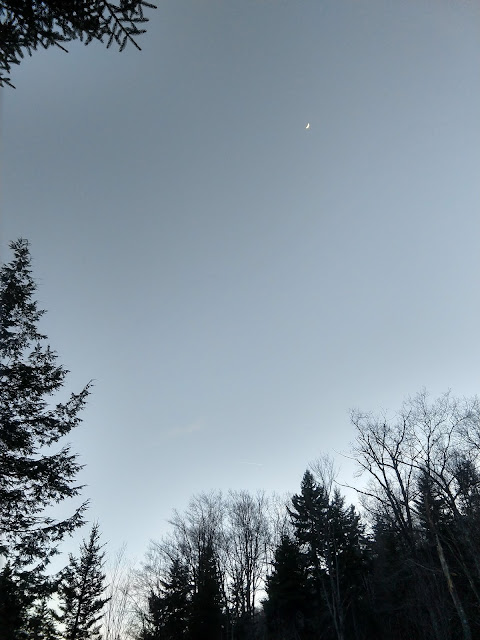 The stars finally came out, but I had already decided that I was going to hike back to the car vs. extra nights because my feet were really bothering me. That also meant that I had extra bourbon to drink and a campfire to enjoy. All of that means that my star photos did not come out that great 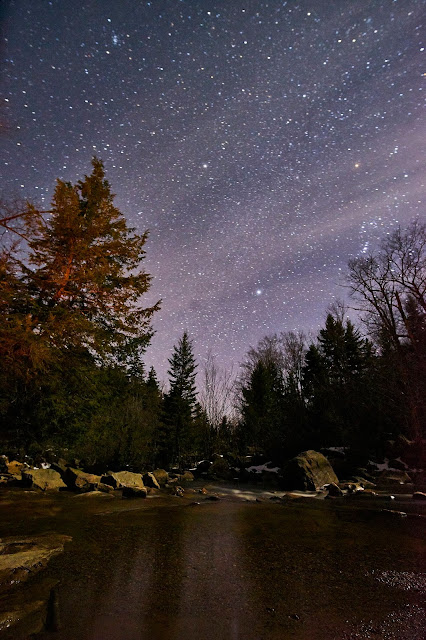 The next morning the creek was still there and still pretty. I had to immediately ford the creek which meant wet feet and it proved that I had made the correct decision to hike out today. 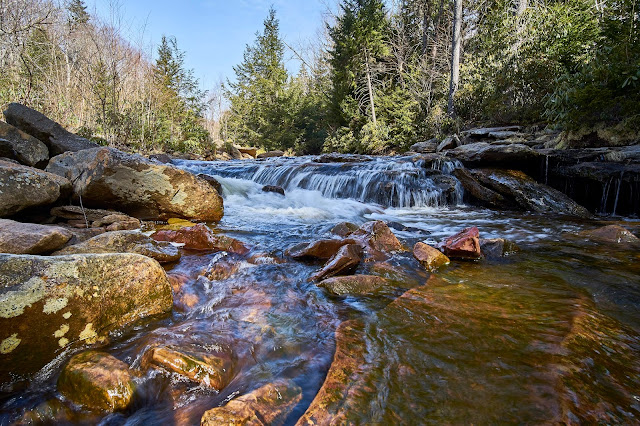 Old railroad spike in the middle of the Red Creek Trail 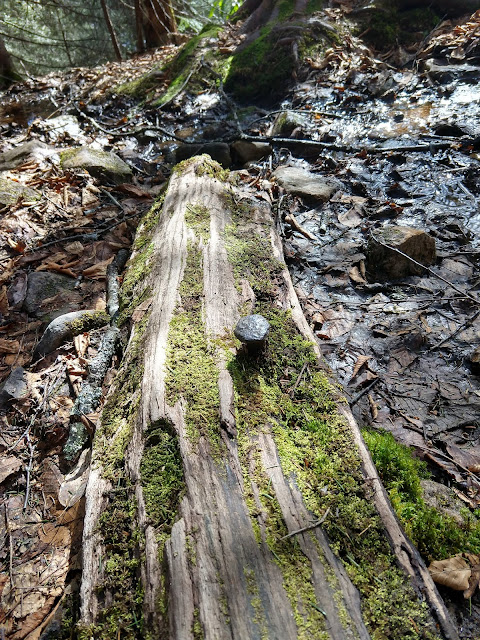 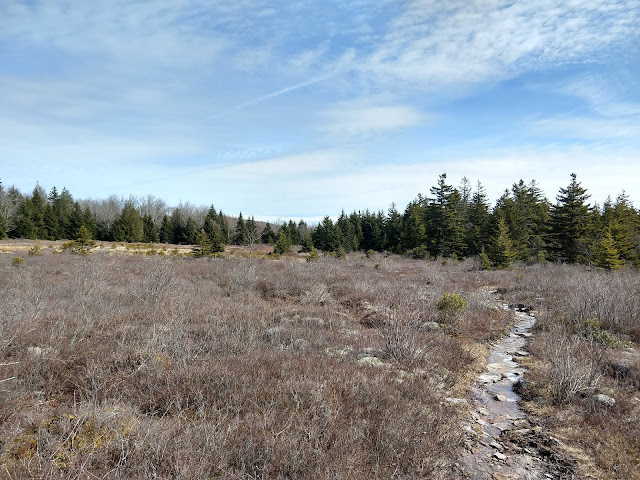 Good trip, just not what I planned because of the blisters. No more hiking with those socks
My trip reports: backpackandbeer.blogspot.com

I love seeing trips reports from here. I've never been, but it looks like a wonderful place. Especially during the time of year you went.

I still enjoyed your "impaired" star shot . Perfect campsite, someone left you a beer and split lots of wood (though it was tiny pieces). Now- who would drag an axe or wedge/hammer and bottled beer out there, can ATVs access that area?
Bummer about the blisters. Socks make a huge difference, also once used a different pair of socks and got blisters very quickly.

Titans said:
I still enjoyed your "impaired" star shot . Perfect campsite, someone left you a beer and split lots of wood (though it was tiny pieces). Now- who would drag an axe or wedge/hammer and bottled beer out there, can ATVs access that area?
Bummer about the blisters. Socks make a huge difference, also once used a different pair of socks and got blisters very quickly.
Click to expand...

No ATVs, just bushcrafters with too much time on their hands I have seen a huge number of people with saws and hatchets in the southeast, I think because it is flat or kind of flat. At least they weren't chopping down trees to build "shelters" or furniture, I've seen both in the past.
My trip reports: backpackandbeer.blogspot.com

Great report and pictures. I haven’t gotten down there yet this year. Hopefully in the fall.

excellent!!
Heading here in October. Few nights in the DS, and a few just south on the Roaring Plains circuit.
“Something will have gone out of us as a people if we ever let the remaining wilderness be destroyed ... We simply need that wild country available to us, even if we never do more than drive to its edge and look in.”
- Wallace Stegner

Jackson said:
I love seeing trips reports from here. I've never been, but it looks like a wonderful place. Especially during the time of year you went.
Click to expand...

The Dolly Sods are very interesting for the SE, it is hard to get the big open views in most other places I hike. It was very empty for this trip, one day I will get there to see fall colors, but then there would be a few more people.
My trip reports: backpackandbeer.blogspot.com

wsp_scott said:
The Dolly Sods are very interesting for the SE, it is hard to get the big open views in most other places I hike.
Click to expand...

That's what I thought as well. You could have taken some of those photos, told me it was Yellowstone, and I'd probably have believed you.

Jackson said:
That's what I thought as well. You could have taken some of those photos, told me it was Yellowstone, and I'd probably have believed you.
Click to expand...

If I knew photoshop, I add in a couple buffalo or a wolf
My trip reports: backpackandbeer.blogspot.com
You must log in or register to reply here.
Similar threads