While I have visited Arches quite a few times in my life, I swear all I've done is hiked to Delicate Arch, Landscape Arch, and the Fiery Furnace. Well I canyoneered there too so I guess that's one more memorable trip.

So when I woke up Tuesday morn I was undaunted by the forecast and headed out to hike the Devil's Garden Loop. A storm was going to move in that afternoon, but bands of clouds were already blowing into the area. I screamed off the mesa to hopefully beat the storm.

By the time I hit the trailhead, I had pretty blue skies. 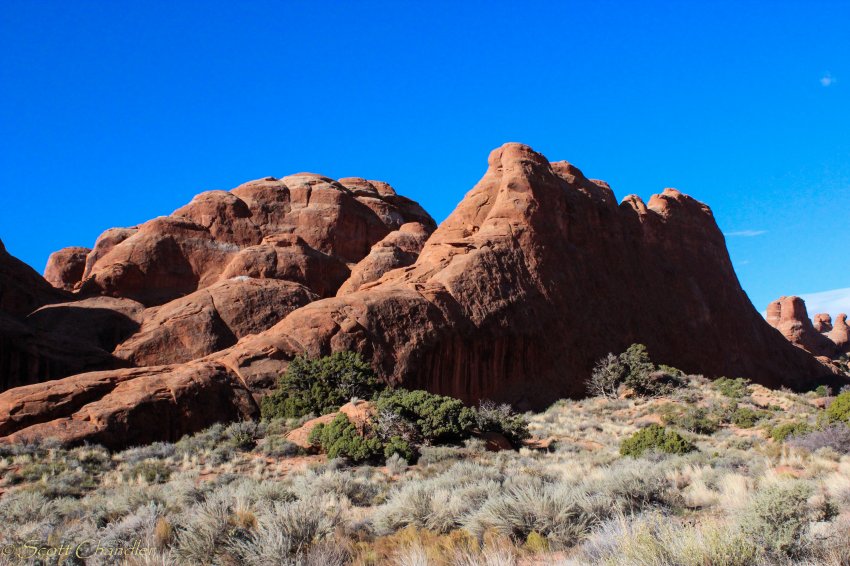 And a couple pining crows. Their acrobatics were actually really cool to watch. I had never seen that before. 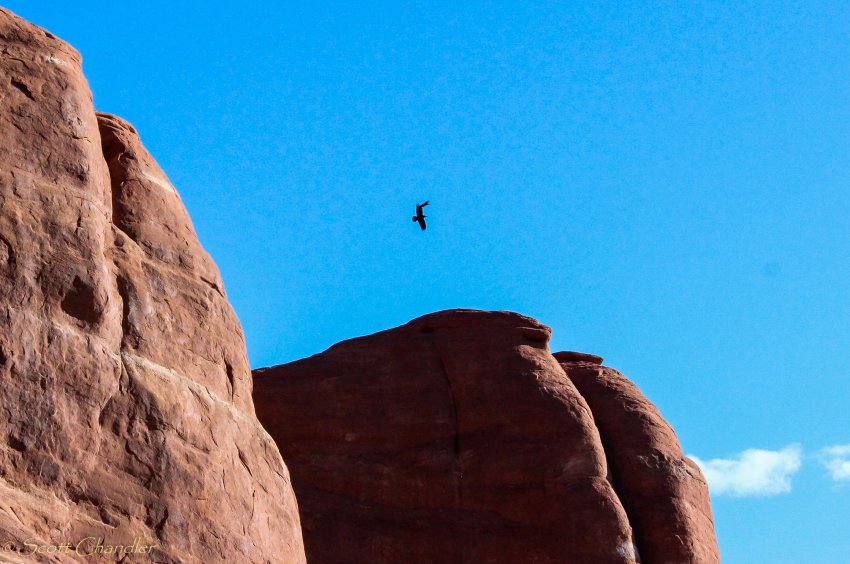 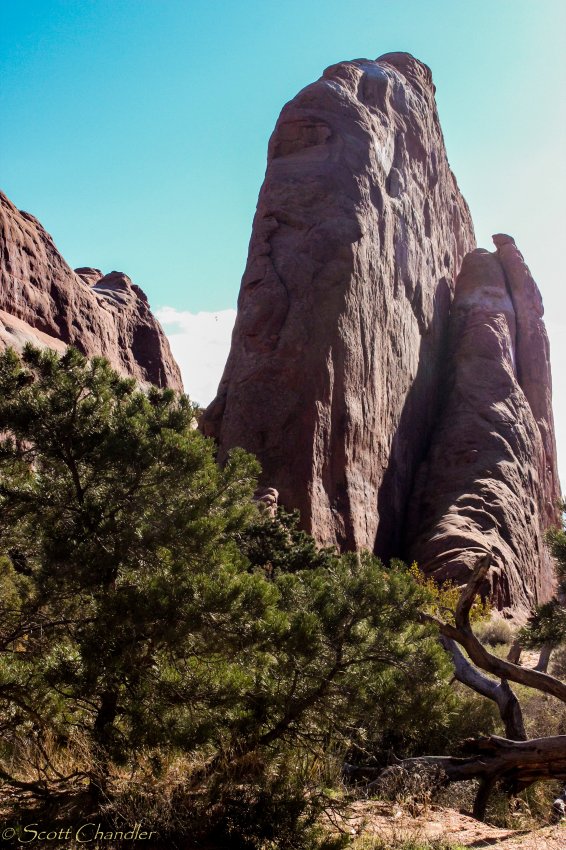 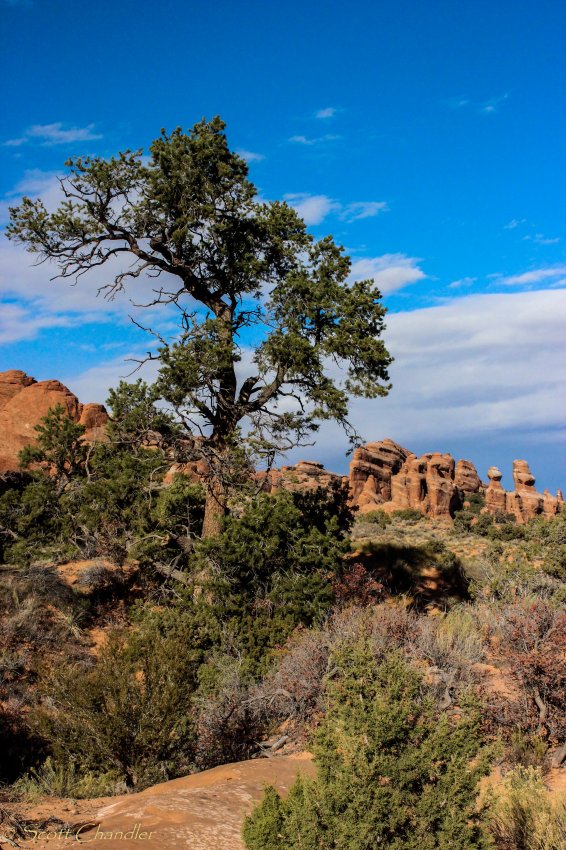 Quickly I reached Landscape Arch. Tis a cool arch, very long. I would love to get behind it one day. I scouted that possibility a few times this day, but ultimately didn't commit to doing it. Part of me considers it a disrespect, to the arch itself... Dang land ethics... 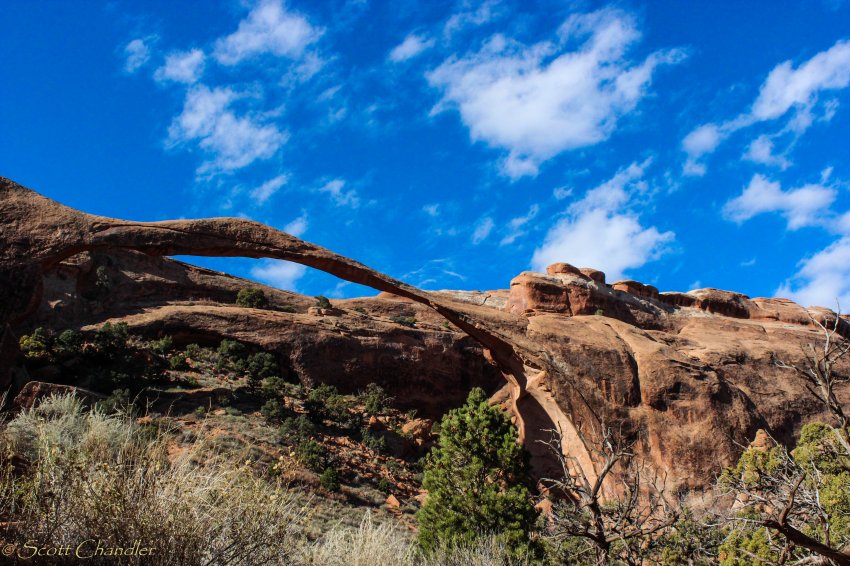 From there I set out into the Loop. 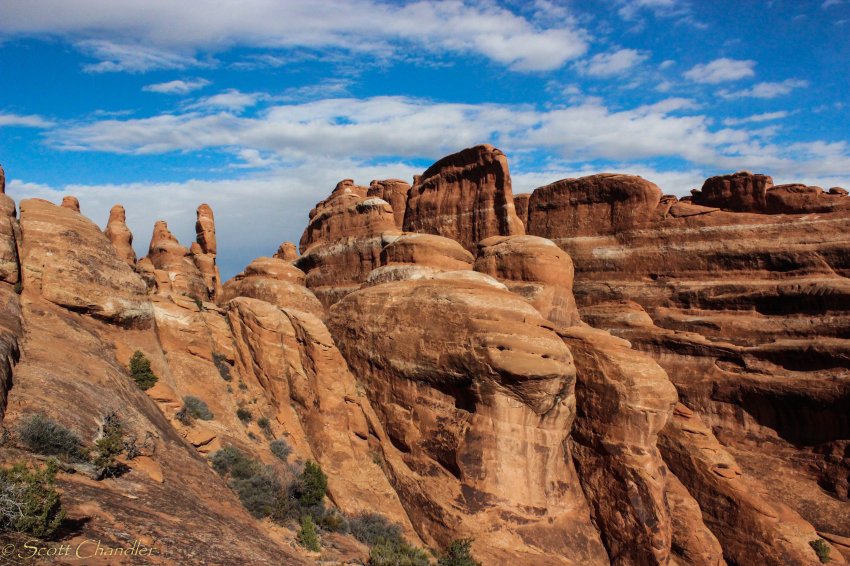 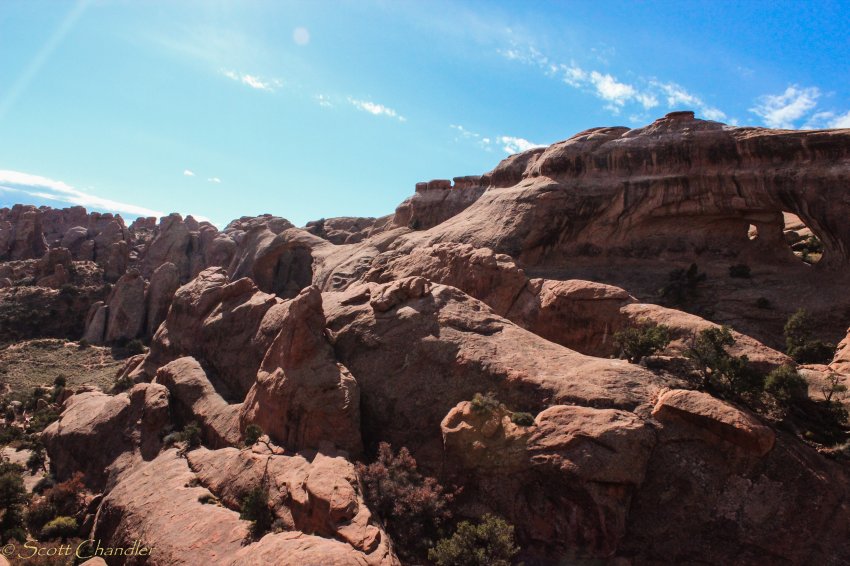 The side trips out to Partition and Navajo Arches were pretty sweet. It is awesome how every arch seems to have its own flavor. 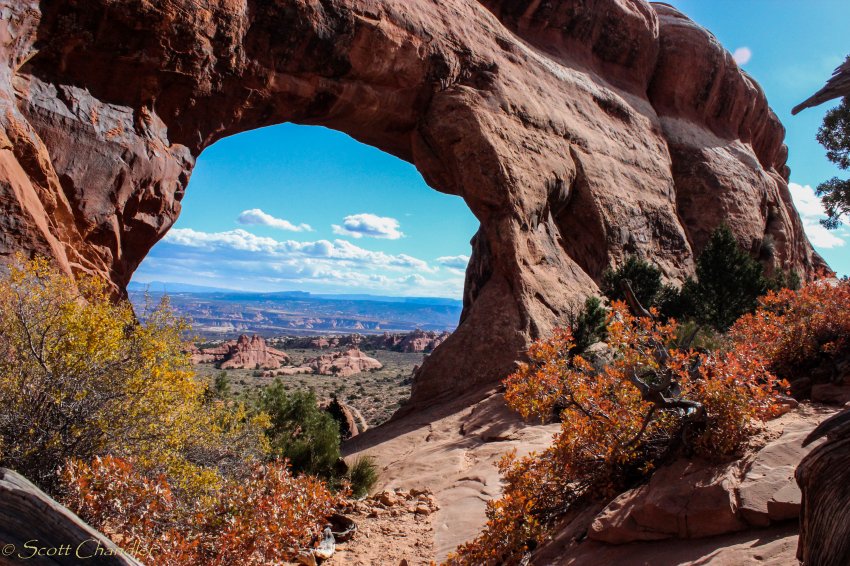 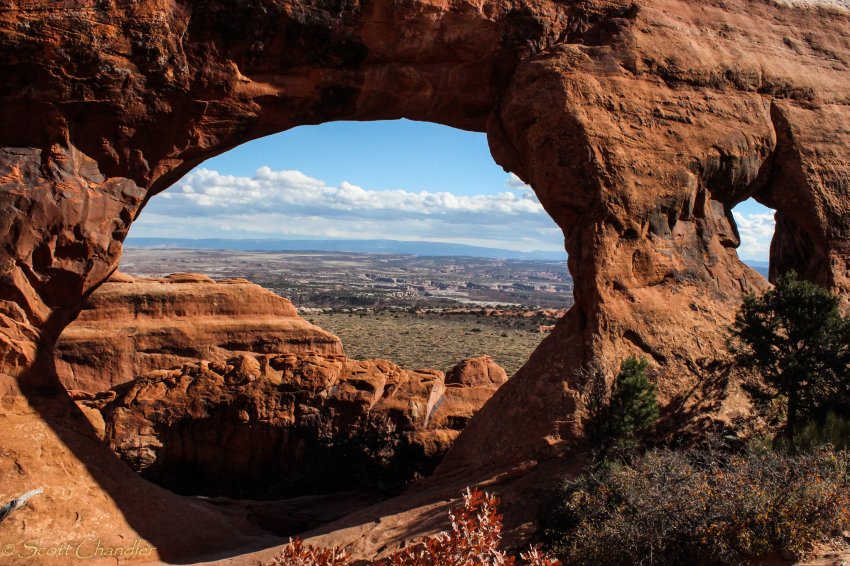 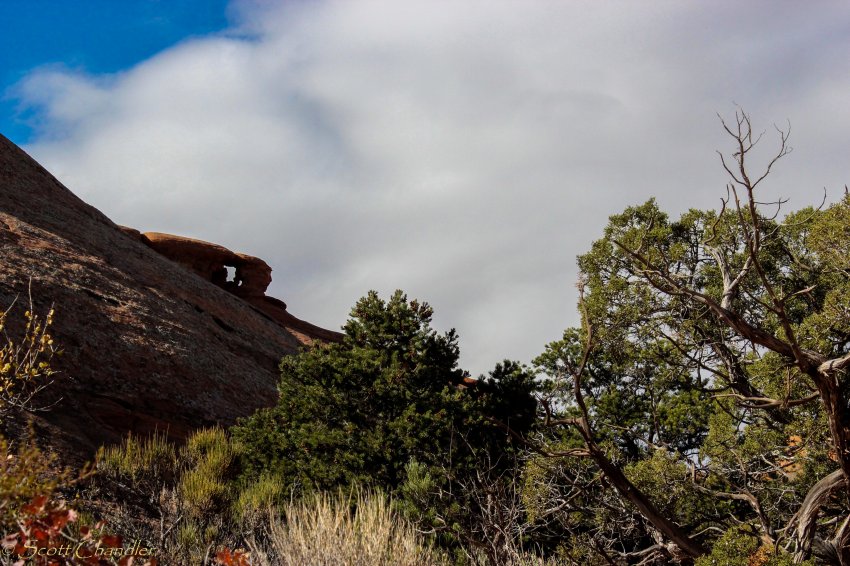 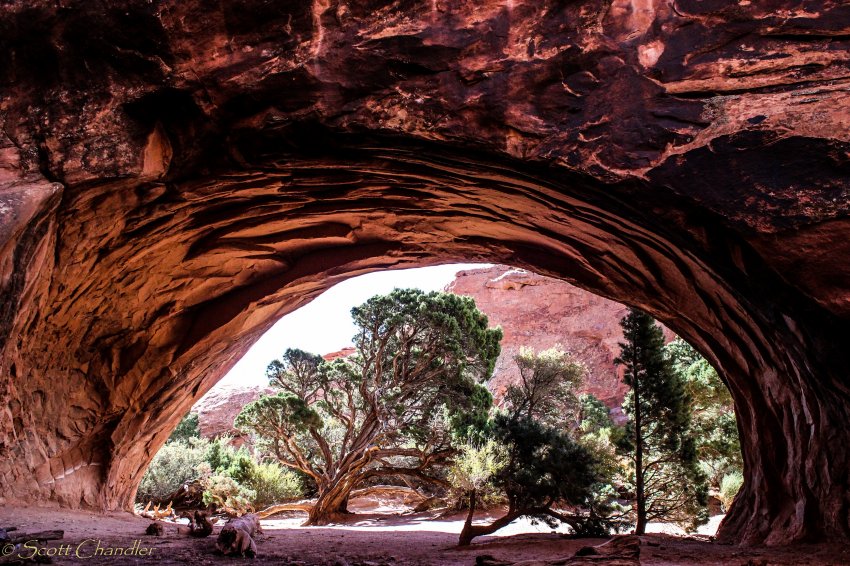 Continuing along the loop I was impressed by the trail itself. It isn't often that the act of following a trail is in itself a fun time. Whoever thought up this trail had a good head on their shoulders. 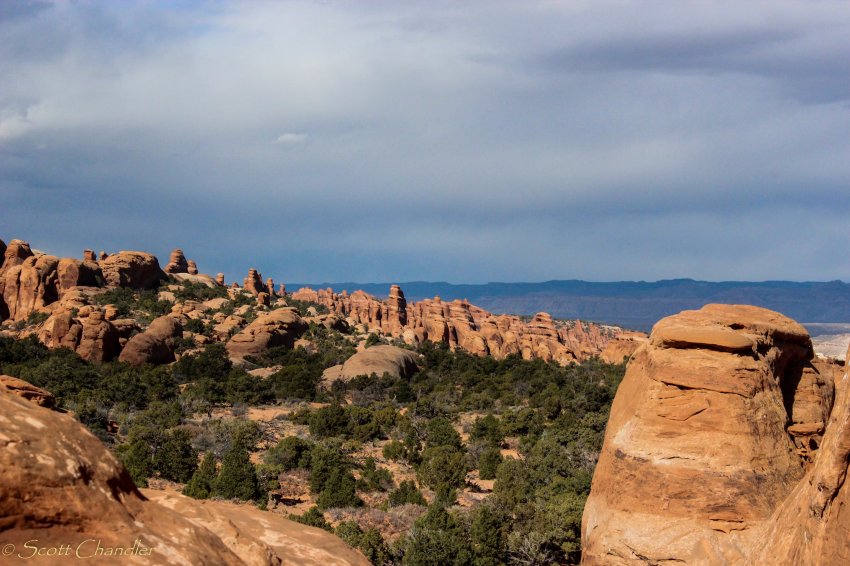 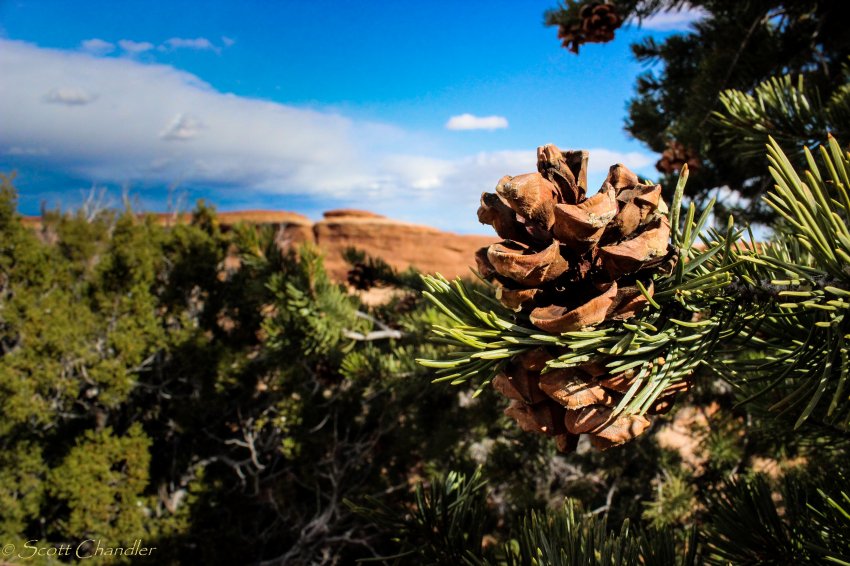 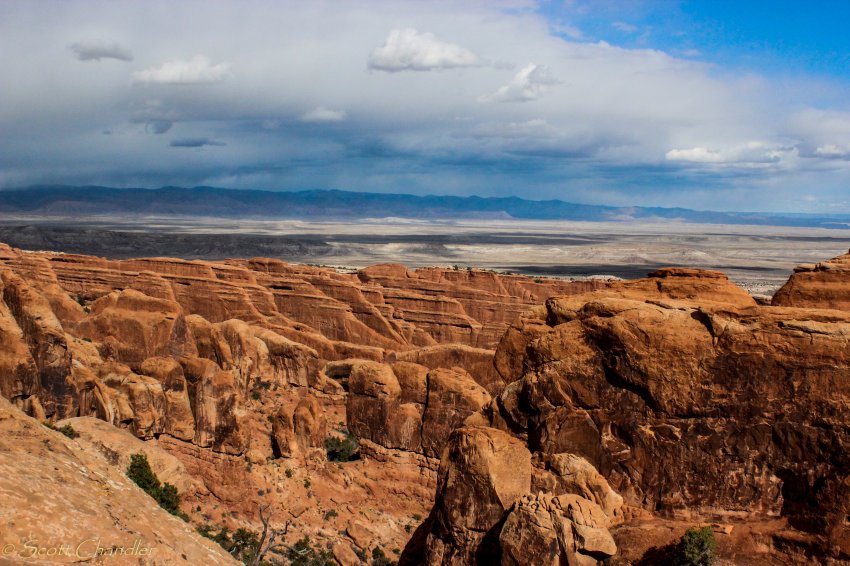 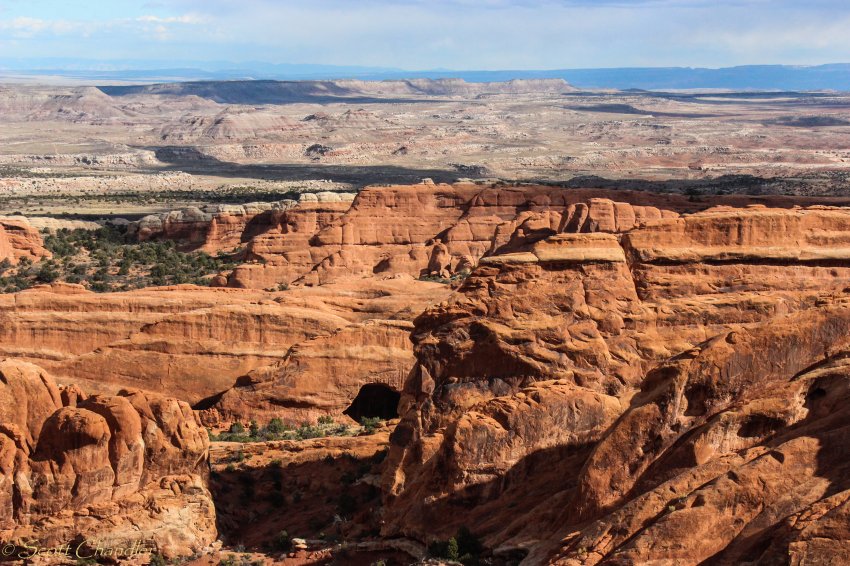 Then Double O Arch. A family seemed to think the arch was there. As they did every permutation of people in picture, at different locations, including illegally on the arch, my patience was thoroughly tested. The ranger hat almost came out... Still a cool spot. 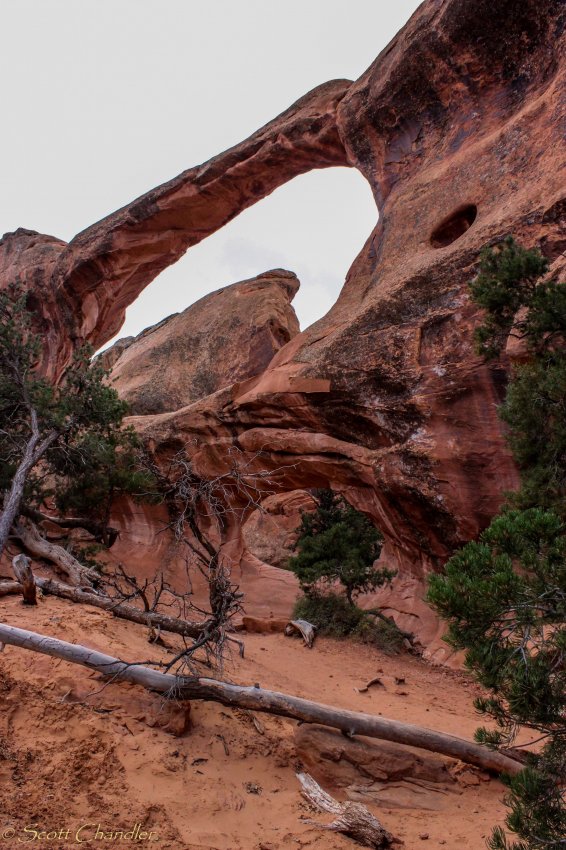 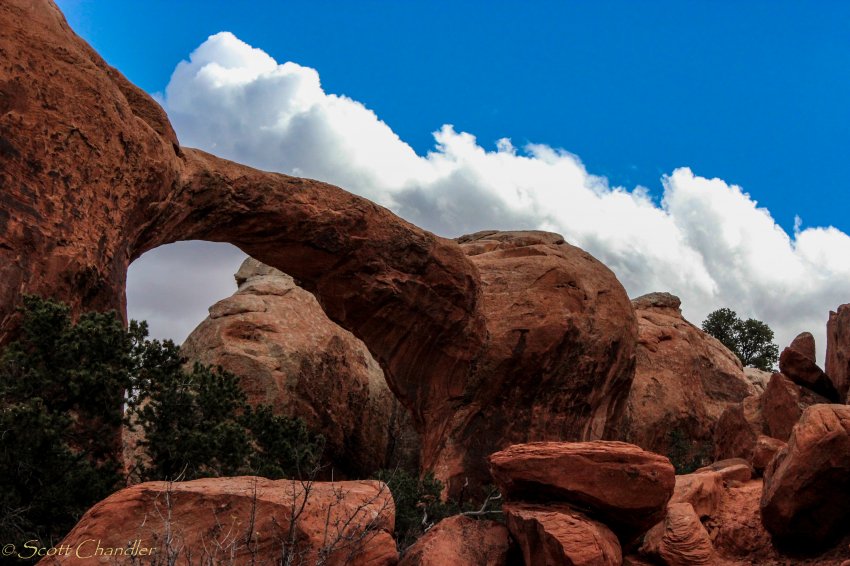 From there I made the quick detour to Dark Angel. It is amazing that Egyptians built towering obelisks, and here was a natural monument of similar ilk. I sure felt an awesome spirituality about it. 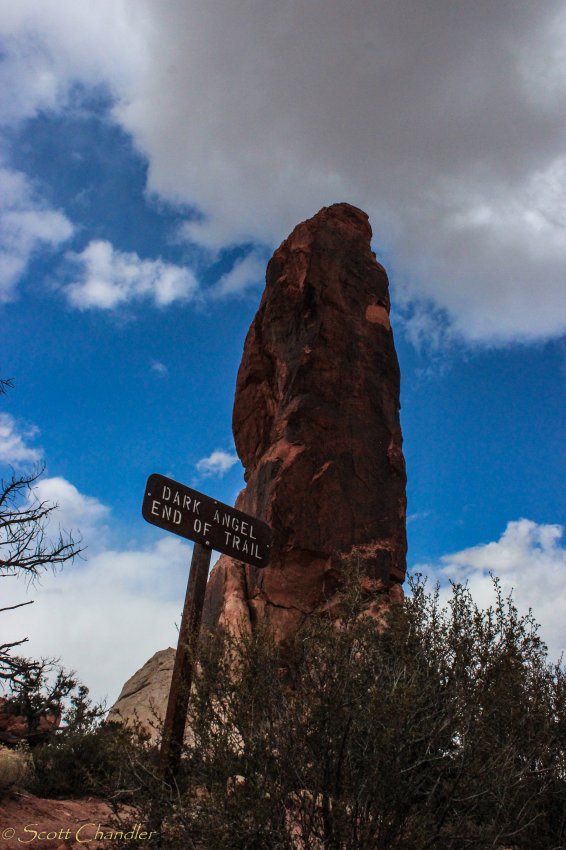 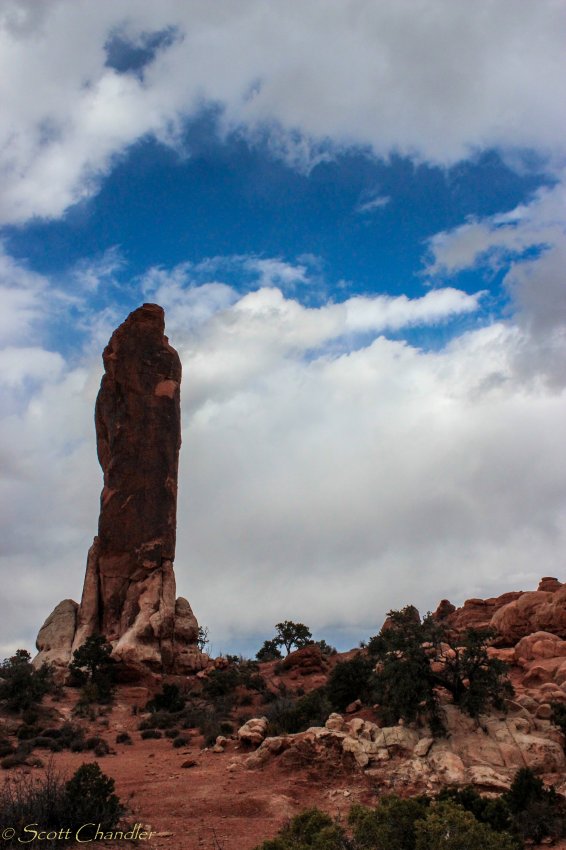 From there it was on to the back side of the loop. Winding through the fins the "primitive","difficult hiking" warnings became evident. It truly felt like a canyoneering experience. 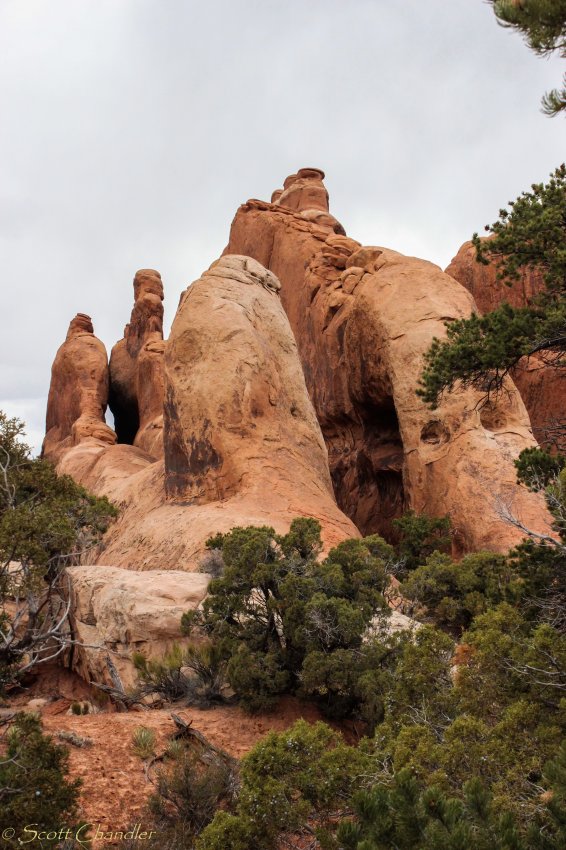 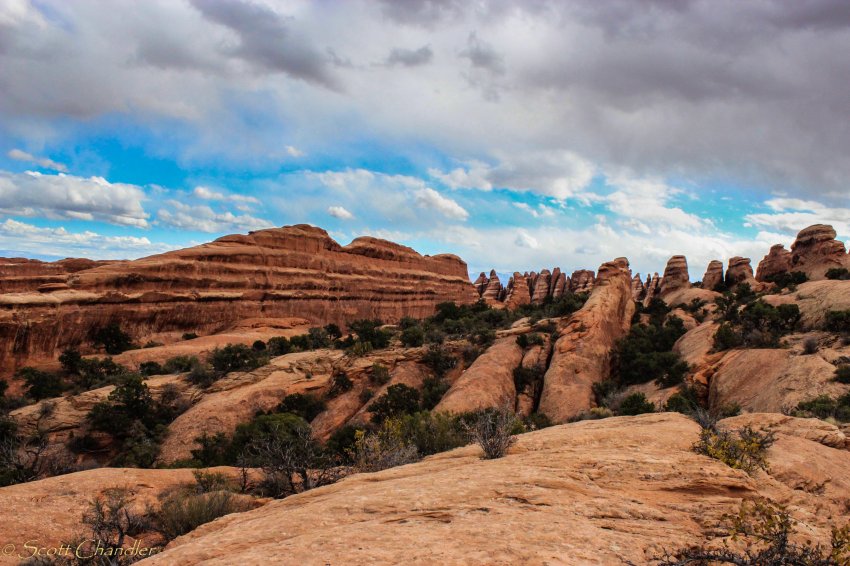 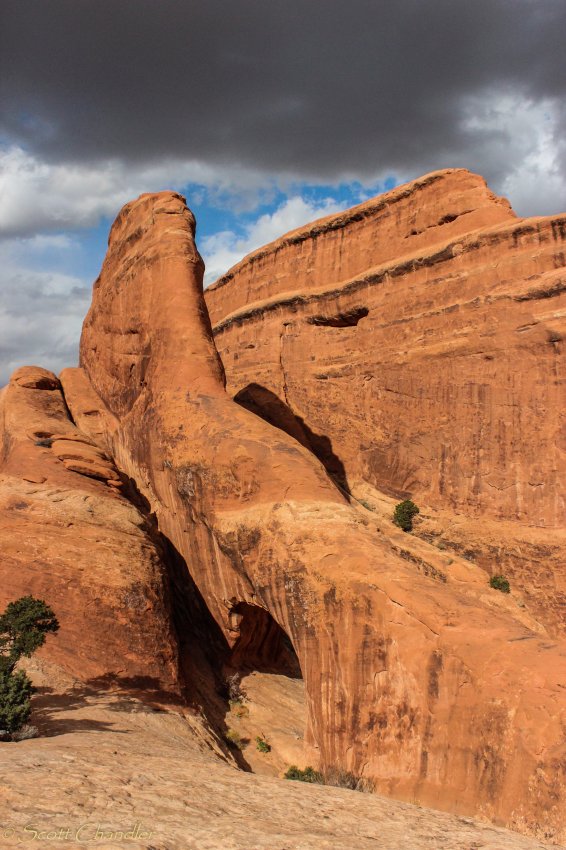 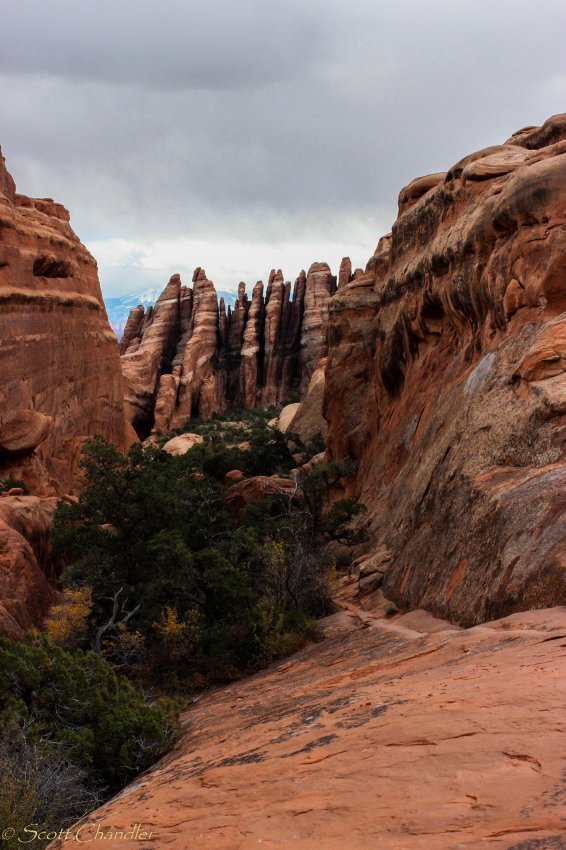 Eventually realizing where I was, I made a quick off trail side trip. My bet worked out, and I got below the aforementioned Black Arch. I can't say it looked like very many people make that stroll. 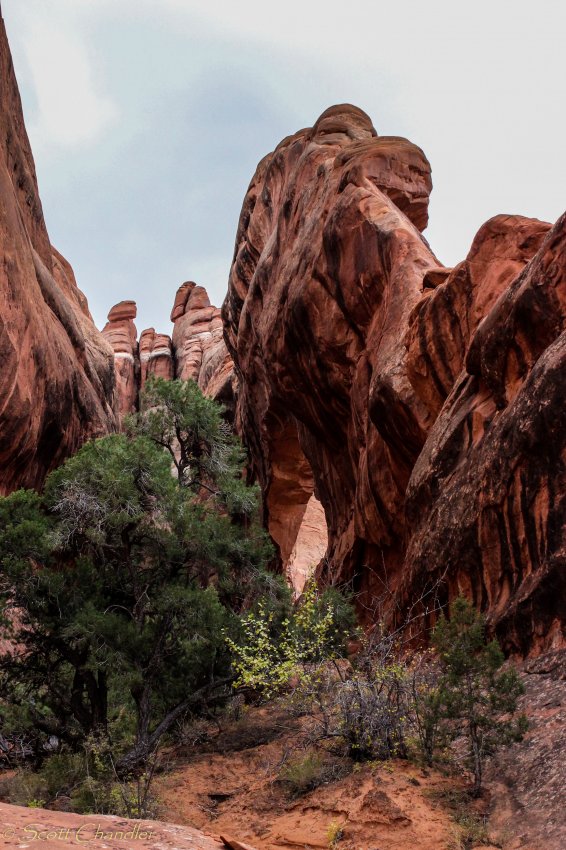 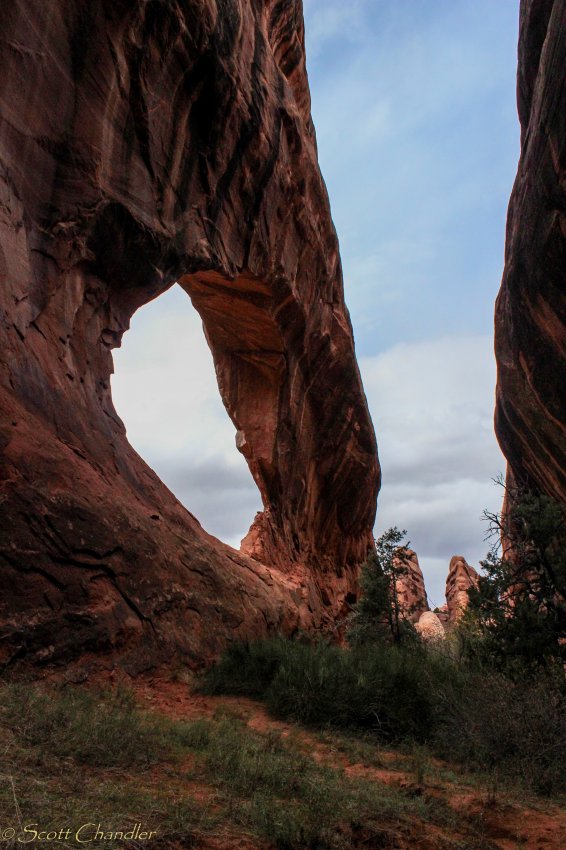 By the time I made it back to Landscape Arch, the sky had filled with clouds and the breeze had turned into a gale. Returning to DHP I entered first rain, and then snow. I did my hike at a good time and made a great Arches memory. 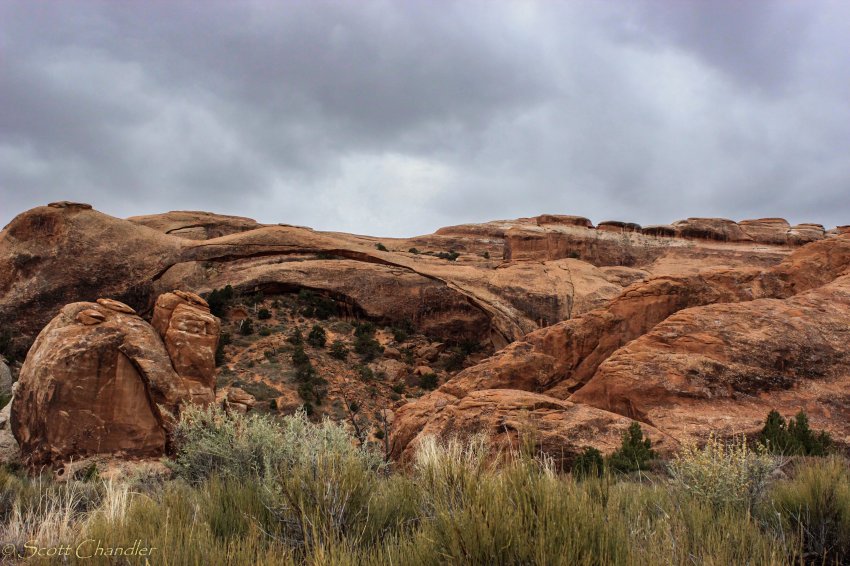 My wife and I attempted the loop last Saturday (11/7). We had never been to Arches for fear of crowds, and we decided we didn't need to bring a map with us on the hike since there were several groups on the trail. We made it up the West side of the loop to Double O, but we didn't remember and couldn't tell where to go from there , so we headed back the way we came and never saw the Eastern side of the loop. We were really disappointed. And embarrassed.. Thanks for posting this! Your photos are fantastic, and it helped me see what we missed out on.

Wonderful pictures, thanks @Scott Chandler - It looks like we traced your steps into Black Arch, I just had that hunch as well .
Somewhere else on the Devil's garden loop, there is a super cool petroglyph 'secondary' site. Very few know about it and the sign-in book shows there are weeks or days in between people visit. It's serene, quiet and such an awesome place.

@Jackson : It's possible to do this beautiful hike without the crowds in the winter. We did the hike 3x in November/December 2017. Arches NP surprised us and we ended up going back again and again. Midweek on a cool winter morning is great- if you have that option. We also experienced the opposite.... sunday before Thanksgiving, a holiday week, not a brilliant choice, because everyone heads to Moab that week.
Likewise midweek during the winter you can be all alone(!) in Fiery Furnace on a self-guided tour (permit required).
Ever been with just 2 or 4 people in Fiery Furnace in the winter ? FUN, exploring every fin and hidden nook.... and it's really cool place in the winter.