Nick posted on another thread that he didn't think he'd seen a Deseret Peak trip report. I had one on my blog that from when I hiked it back in 2011, so transferred it over here. So Nick, now there's a TR on Deseret Peak!

Fall is my favorite time of year. I love the cooler weather and beautiful days of fall. I also get a sense of urgency to get out &amp; accomplish a few things that I've been wanting to but have avoided doing in the heat of summer. I think that deep down I'm aware that winter is coming. Somewhere earlier this year I decided I wanted to hike Thurston Peak. It's visible out my back window, and I've never hiked it before, even though it's the Davis and Morgan County highpoint. Unfortunately, Farmington Canyon is closed, and I didn't want to spend the 50 miles or so on backroads driving to Francis Peak from Bountiful. So, I just changed destinations. Thurston will have to wait. Deseret Peak suddenly found itself at the top of the priority list. 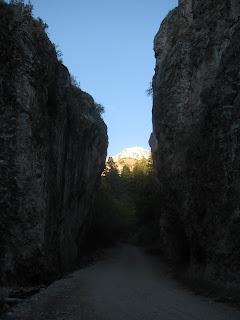 I called up a friend and he said to count him in. He promptly took over the planning of the hike, so I took a back seat and let him. We left Kaysville at about 6:15 on Saturday morning, drove to Salt Lake to meet up with a few other people, then headed off for Deseret. Normally my wife and daughter would come too, but my wife has an altitude restriction for the next month or so, and I didn't want to carry the added weight from a two year old. 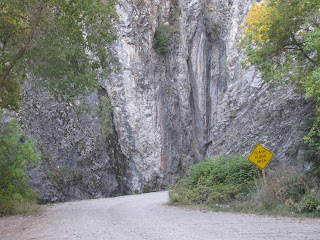 We took the Tooele exit, then turned off for Grantsville. 5 miles south of Grantsville, we turned west up South Willow Canyon. South Willow Canyon was a pretty amazing spot. I especially liked the narrows in the grey rock. It's a very pretty canyon- especially with the fall leaves this time of year. The parking lot at the end of the road was crazy busy. I was surprised at how popular and full it was so early in the morning. I guess others had the same idea I did. 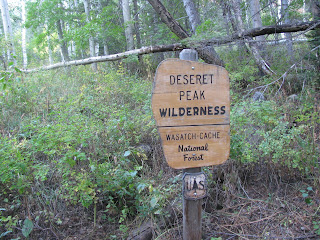 Just west of the trailhead, we crossed the wilderness boundary and entered the Deseret Peak Wilderness. The first part of the hike lasted about 1.5 miles and 1000 vertical feet as we hiked through a forest of evergreens and aspens. Pretty soon though the trail started to wander through alpine meadows. 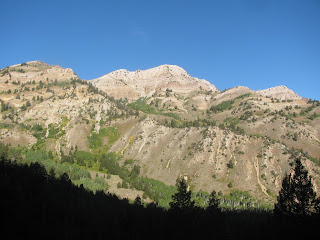 We had a few good views of South and North Willow Peak off to the northwest. 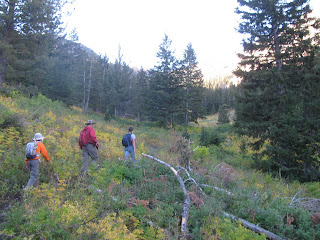 The trail would continue to climb, mostly through the open meadows. We found a countless current berries along the trail. This section climbs 1,500 feet, and is about 1 1/2 mile long. This section is marked by a steep section of switchbacks up to a saddle. 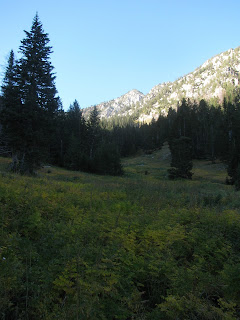 The saddle makes a great spot for a quick rest. It's just over 10,000 feet and has a big rock and a trail sign. From here on out most of the vegetation is about ankle high. 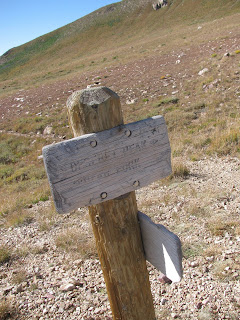 We pressed on from the saddle to the peak. The last section is 1/2-3/4 miles long, and you gain 1000 vertical feet- most of it in the first couple hundred yards. 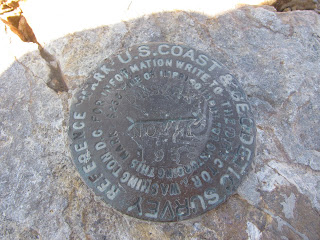 The top was a welcome break. We summited, found the benchmark on top, and enjoyed the views of the salt flats, Great Salt Lake, and Tooele Valley. Wo-Hoo! The highest peak of the Stansbury Mountains and Tooele County at 11,031 feet above sea level. It's also one of the 50-something peaks in the US with 5,000 ft prominence. We spent about half an hour enjoying the view before deciding to head back down. A scout troop was about 1/4 mile below us and we didn't want to be there when they arrived. 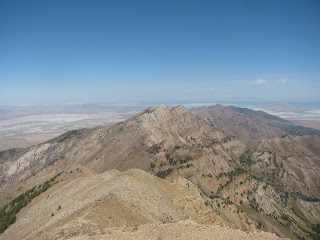 We dropped down on the trail heading north from the summit. It sees much less use, but offered a different experience than the trail going up. We followed it until we came to a chute that dropped down to the trail below. Rather than following the trail around another (smaller) peak, we opted to head down the chute. 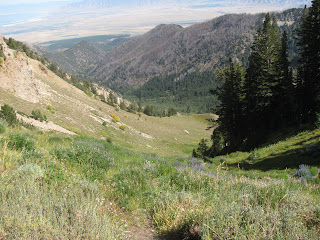 There were faint trails that led down the chute for most of the way. Somewhere about half way down I tweaked something in my right knee. I did my best to hobble the rest of the way. 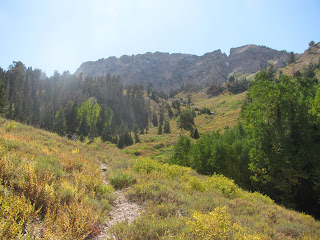 Back at the trail we had the best views of Deseret Peak. It's definitely an impressive and beautiful spot. 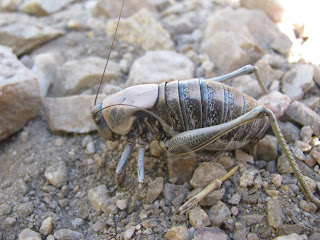 A mile from the trailhead, we saw a huge mormon cricket in the trail. It was HUGE- about the size of my big toe. It appeared to be depositing eggs in the loose dirt of the trail. I took a few pictures, then continued my hobble to the trailhead. We made it back to the car with plenty of day left. 7 hours to hike 7-8 miles and go up and down 3,600 vertical feet. What a great way to spend a Saturday!

Certainly is beautiful there!!

Sent from my XT1080 using Tapatalk

Deseret is one of my favorite hikes. I love the view at the top. You can see everything from up there!

Sweet!!
IG: @backcountrypost
You must log in or register to reply here.
Similar threads