A few years ago we took a trip to Death Valley in the spring...thinking that it would be a good way to get in some hiking while the Sierra was under snow, and it would also give us a chance to see one of the largest US national parks at a time when the temperatures were conducive to hiking and exploring...rather than sitting and sweating.
It worked. And so in 2015 we went back again for a second helping--including plans for a couple of overnight backpacking trips.
After a long drive down, we spent the first day in the park just exploring the Funeral Mountains east of Death Valley. We drove to Hole in the Wall, and then hiked up into Slit Canyon--a nice little adventure that whetted our appetite for more. And so we did the same in Echo Canyon, hiking to Eye of the Needle. Both led us on enchanting tours of narrow canyons full of serenity and scenery. 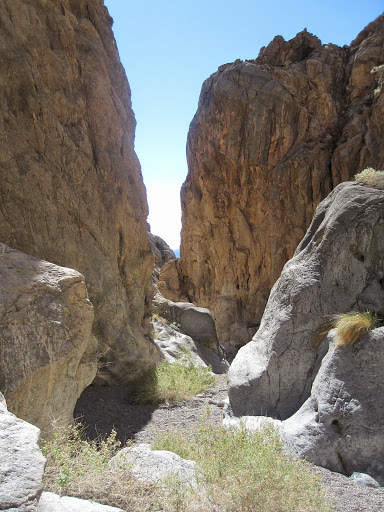 That's the lower reaches of Slit Canyon.
On both of these trips, our little 2wd hybrid SUV was just fine on the dirt roads---we felt pretty good about the fact that it made both hikes really easy. In fact, we felt pretty darn confident at this point.
Which led us to our next adventure, backpacking in Cottonwood Canyon. The first 8 miles of the dirt road are described as suitable to all passenger vehicles. And Michel Digonnet's Hiking in Death Valley describes the following ten miles as passable for anything with high clearance.
Off we went in our Ford Escape.
And after a couple of tight spots, we drove almost all the way to the end of the road at Cottonwood Canyon. Often very slowly. The road was not in good shape at all, and despite a couple of people we met on the way who reassured us, it was pretty tricky going. P even got out of the car a couple of times to check out the route before moving forward. We finally stopped about a half-mile from the end of the road, where it dove steeply into a wash and then just as steeply up the other side...and then did that three more times in succession. We chickened out, parked our car, and covered the last section on foot.
Upper Cottonwood Canyon does not have scenery that is as dramatic at the Funeral Mountains, and we found the hike vaguely disappointing. We reached Cottonwood Springs to discover that the whole area was covered in horse manure...and the brown hills seemed peaceful and...well, really brown, and really peaceful. We found the herd of wild horses (or rather, they found us) that were living there, and checked out the route up over the pass to Marble Canyon---to be tackled another day. 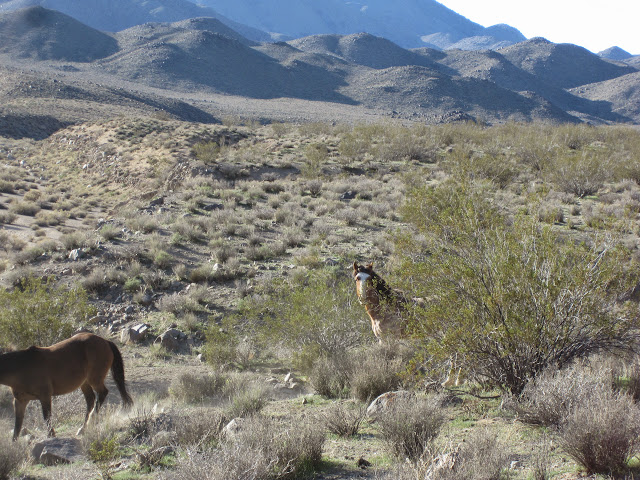 The photo shows two of the wild horses as they crept by us on the way to drink at Cottonwood Springs.

That evening, as we were reading the NPS notes on this hike, we discovered that they considered the road impassable except for 4X4s--which gave us something to think about that night, and on the hike back out. Did we somehow get ourselves into something that would prove a problem on the drive out?
We were delighted to see some climbers and their 4X4s at the end of the road as we hiked out. We weren't sure we would need help, but it was nice to know they were in the area. They were the only people we saw within eight miles of the trailhead. And then we began the slow, slow, and careful drive back out.
And there were no problems. We made it just fine. The only sad part was that P was so focused on his driving, and M was so focused on holding onto the armrest and groaning at every tight spot, that we didn't take any pictures. And that's sad, because the lower part of Cottonwood Canyon, where the road is, has far more beauty and scenery that the upper part where we hiked.
But it did give us a new appreciation of how important it is to check the latest info on any hike, no matter whose book you are reading!
The celebrate our "escape" out of Cottonwood Canyon, we drove to Natural Bridge and topped off the day with a hike up that small but lovely canyon. As usual, once we passed the obvious point of interest, we left all the rest of the tourists behind, and had a delightful stroll up that canyon for another half mile in peace and solitude. 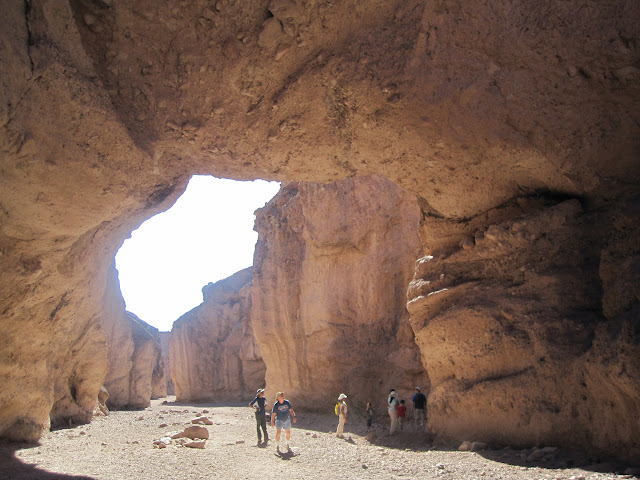 That's a shot of the bridge at right, with a few of our fellow hikers looking up in wonder.

The next day, M began to come down with the cold that P had been fighting all week, and so we took the day off. We drove to Scotty's Castle, Ubehebe Crater, and Rhyolite, Nevada, and generally took life easy. It was a nice way to spend a warm sunny day in February. and it seemed to be a reasonably good medicine for fighting a cold.
We found a few more places that we would like to hike in the future, including a couple of places we'd like to backpack. That night in the campground, we enjoyed a chat with a neighbor and were already thinking about next time.
And on the way home, we found ourselves in one more adventure, as M suggested we take the road to Wildrose on the way to Ridgecrest and home. 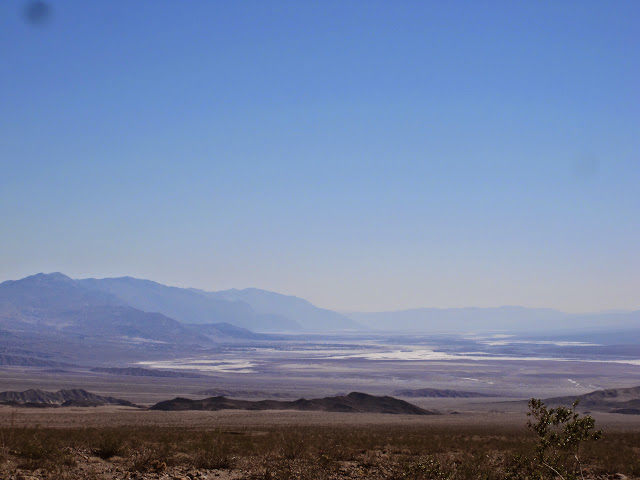 That's what we did. Only upon arriving at the turn-off to Wildrose, some 15-20 miles up the road, we found the rest of the road was marked "Closed." Oops.
How bad could it be? We were about to find out. After two enormous potholes in the first fifty feet of the road, it wasn't too bad. There were clearly areas that were eroded away, and the road dwindled down to a single lane between steep drop-offs. But the road was passable. It was beautiful. And we saw a small herd of wild burros on the way, as well. With a sigh of relief, we eased past the last narrow section about mile from the end of the road...
And so we added to the legend of the little blue Escape, and drove past the "Road Closed" sign in the other direction, slipped out onto the Panamint highway, and sped off to Trona and home.
The weather was nearly perfect for our trip. The hottest temperature was 90F at the Furnace Creek visitors' center in the middle of the afternoon, and the coldest was about 32F in Cottonwood Canyon at 3500 feet during our backpacking trip. The skies were clear, the flowers were just barely beginning to show, and the hiking was delightful.
Here's a link to our Picasa page with all the photos you'd care to see:
https://picasaweb.google.com/balzaccom/DeathValley2015#
We'll be back.
Check our our website: http://www.backpackthesierra.com/
Or just read a good mystery novel set in the Sierra; https://www.amazon.com/Danger-Falling-Rocks-Paul-Wagner/dp/0984884963
You must log in or register to reply here.
Similar threads