Had to get out of the house last Saturday so I decided to head up the Great Western Trail above Layton, Utah. I have been trying to find access to the Wasatch ridge line from Weber Canyon and have previously scouted a bit up from the canyon bottom a couple of times last year. I thought today I might try to get up to the ridge above Weber Canyon for a view to see if a route is even possible. I knew I would be on snow for much of the trip and figured I wouldn't be able to get up that high so I decided to not bring my snowshoes. I would soon wish I had.

I accessed the GWT from the Bonneville Shoreline Trail just above highway 193. As with most trails in the Wasatch the climb up to join the GWT is steep. I started hitting patches of snow at 7,000 feet. 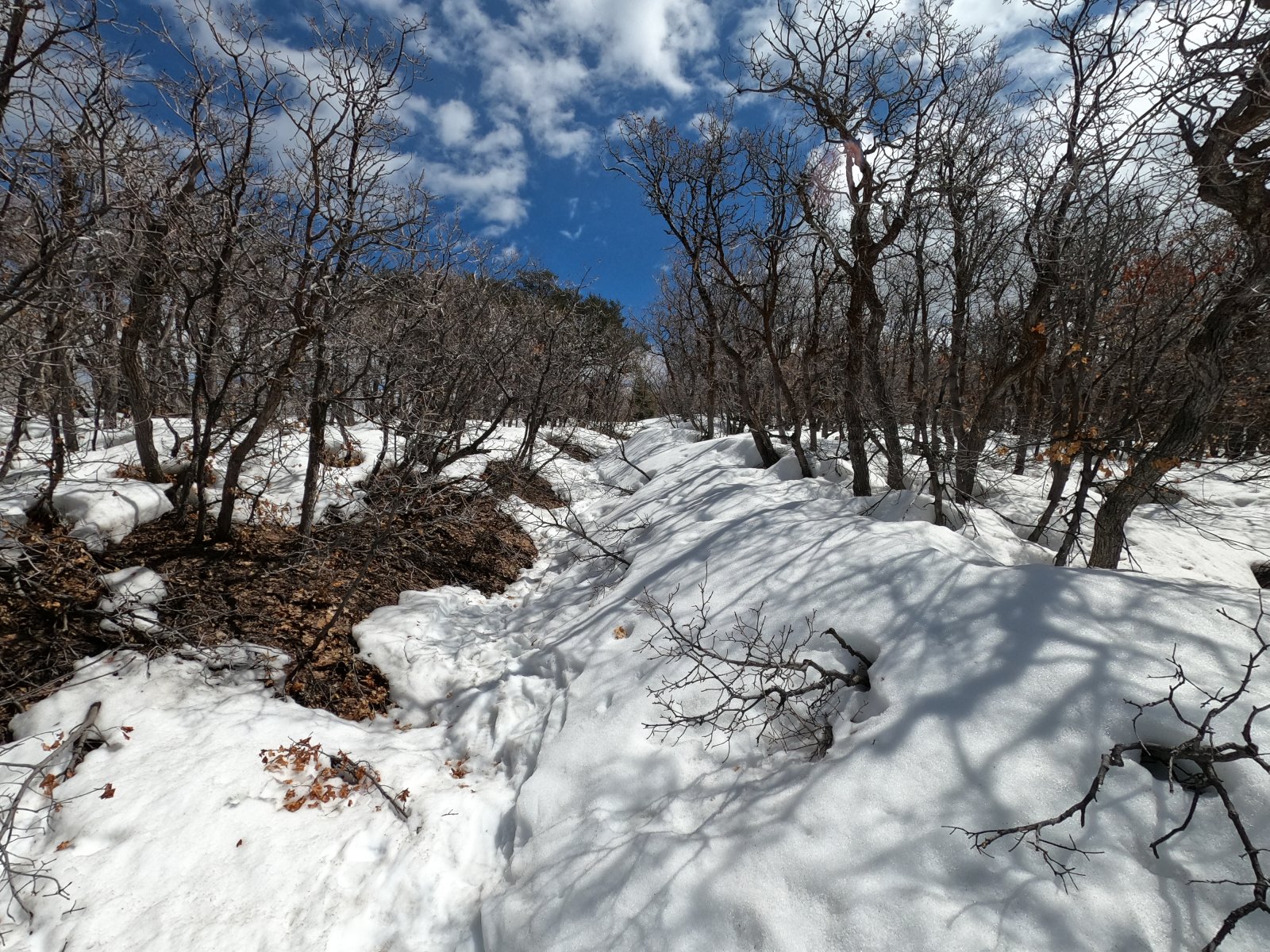 By 7,200 feet I was on snow 100% of the time and would be until the very top of my travels. Ascending the GWT is not short on amazing views of the valley below. 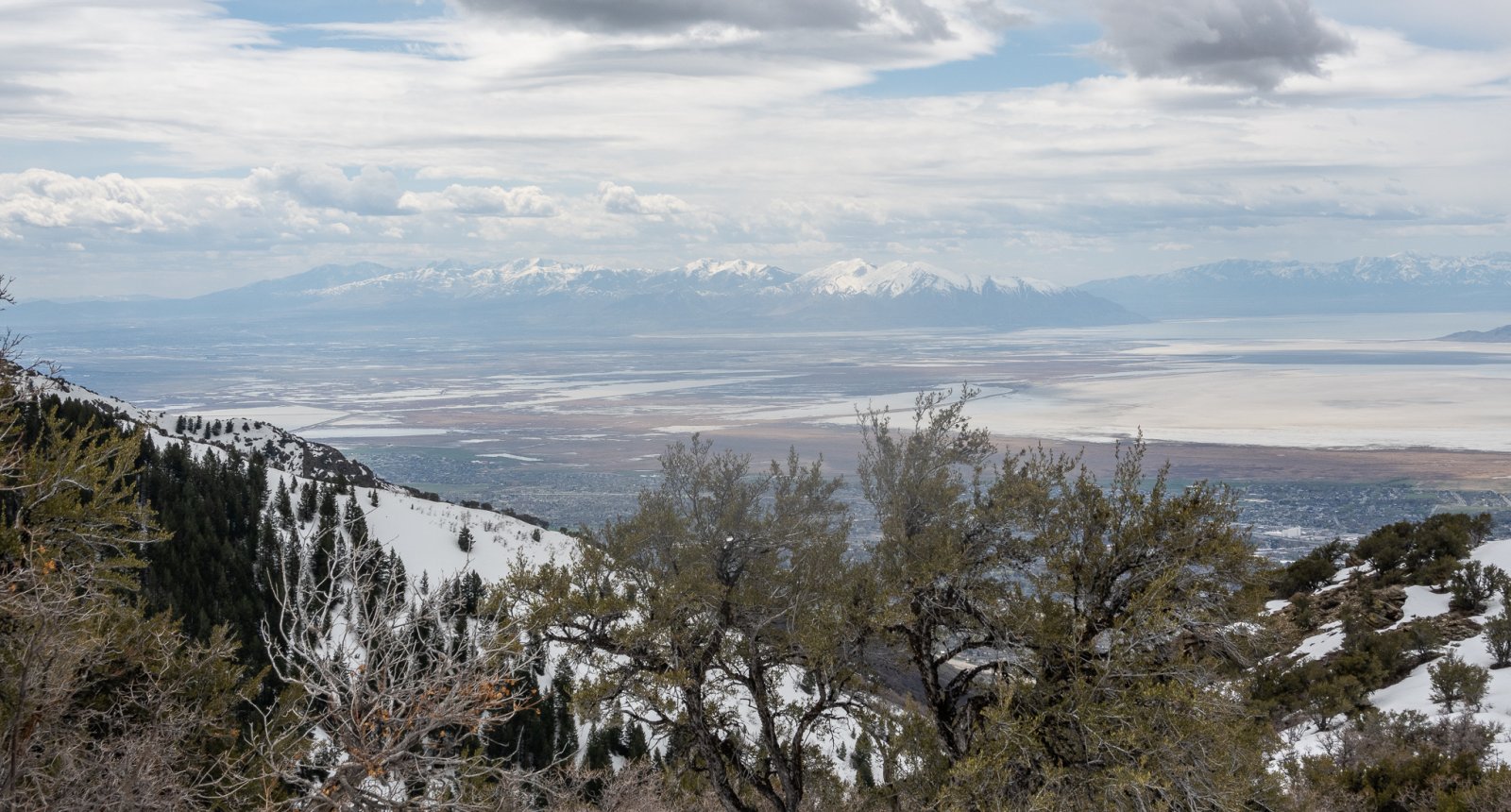 The route soon comes out of the junipers and scrub oak continuing up the ridge. 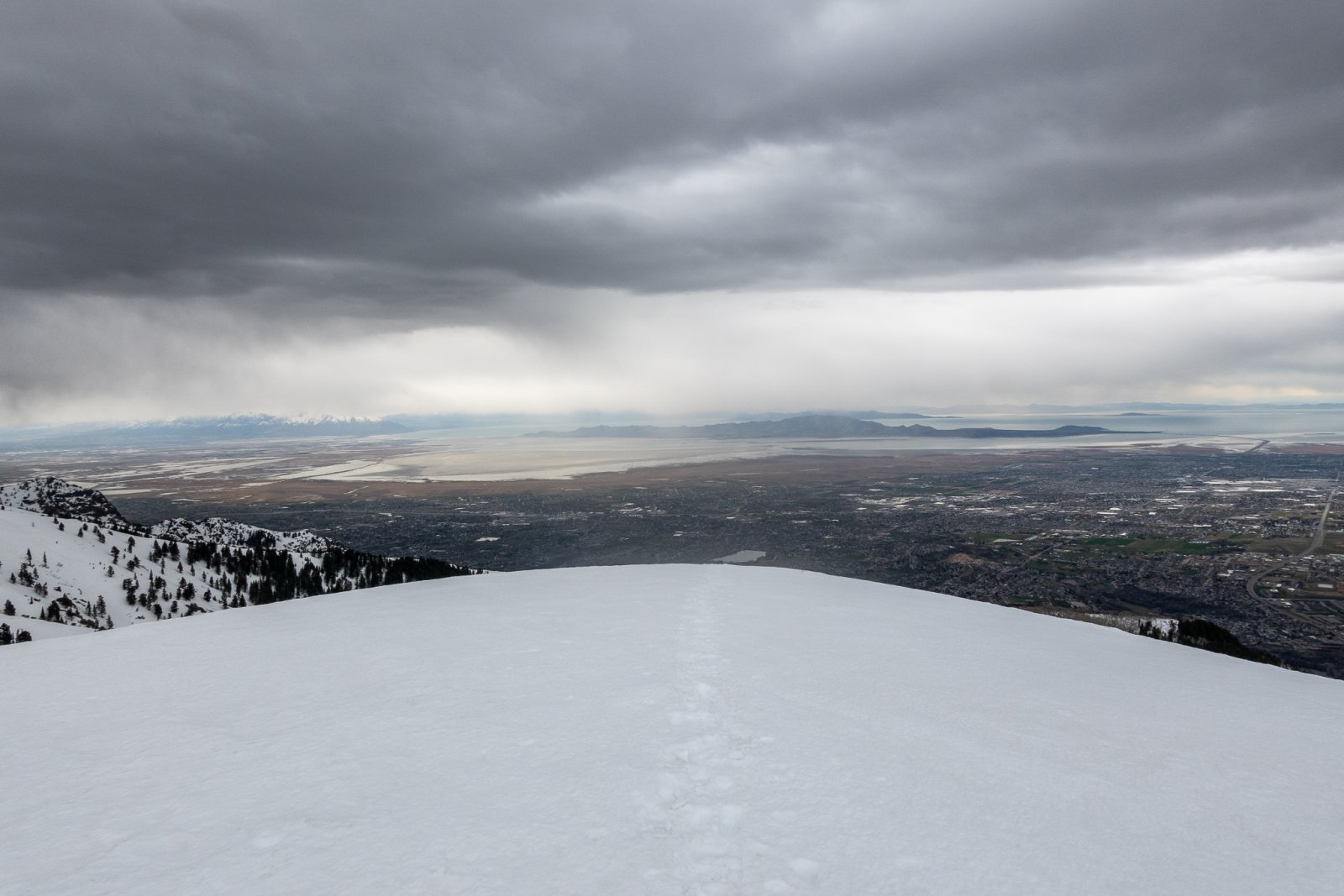 The snow was in poor condition. With the warmer weather and my getting started late in the morning post holing would be the theme from here on up. Plunging in from 3-4 inches to hip deep at times I was really wishing I would have brought the snow shoes. I did have on my winter hiking boots and gaiters which were a big help. Nevertheless, I pressed on.

At about 8,600 feet the GWT heads southward across the ridge in the foreground, past a perennial piped spring, then on up though the pines on the other side. The bowl above the pines is very steep and, believe it or not, the trail heads straight up the right-hand side to the ridge. I had been turned back there on a previous trip. 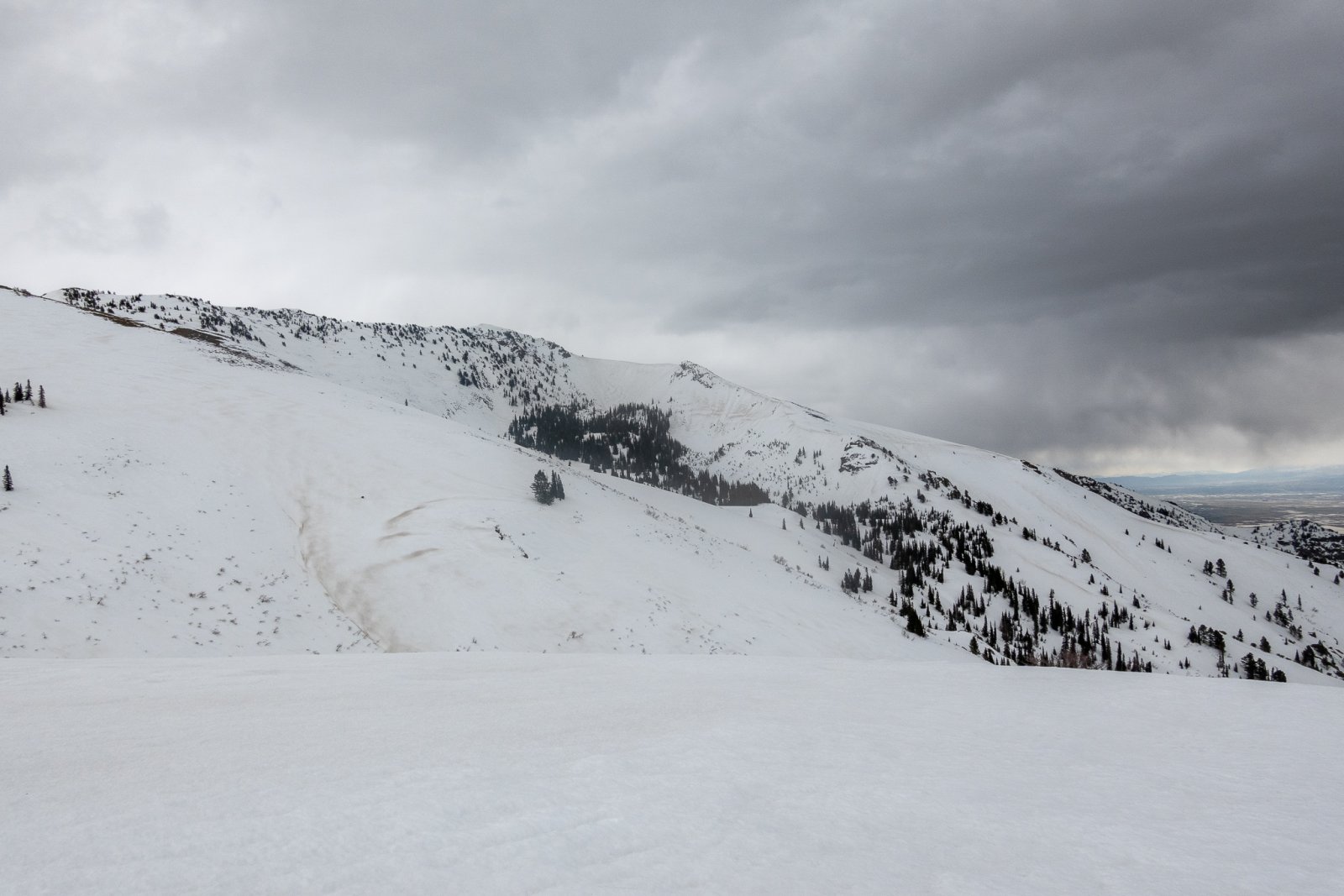 From here I left the trail heading NNE in an attempt to reach the ridge. I tried to stay on the more wind blown areas which were a bit more crusty with less post holing. Some places I was going hip-deep which was frustrating at best but could often manage to find firmer snow near by. The views with the incoming storm were fascinating. 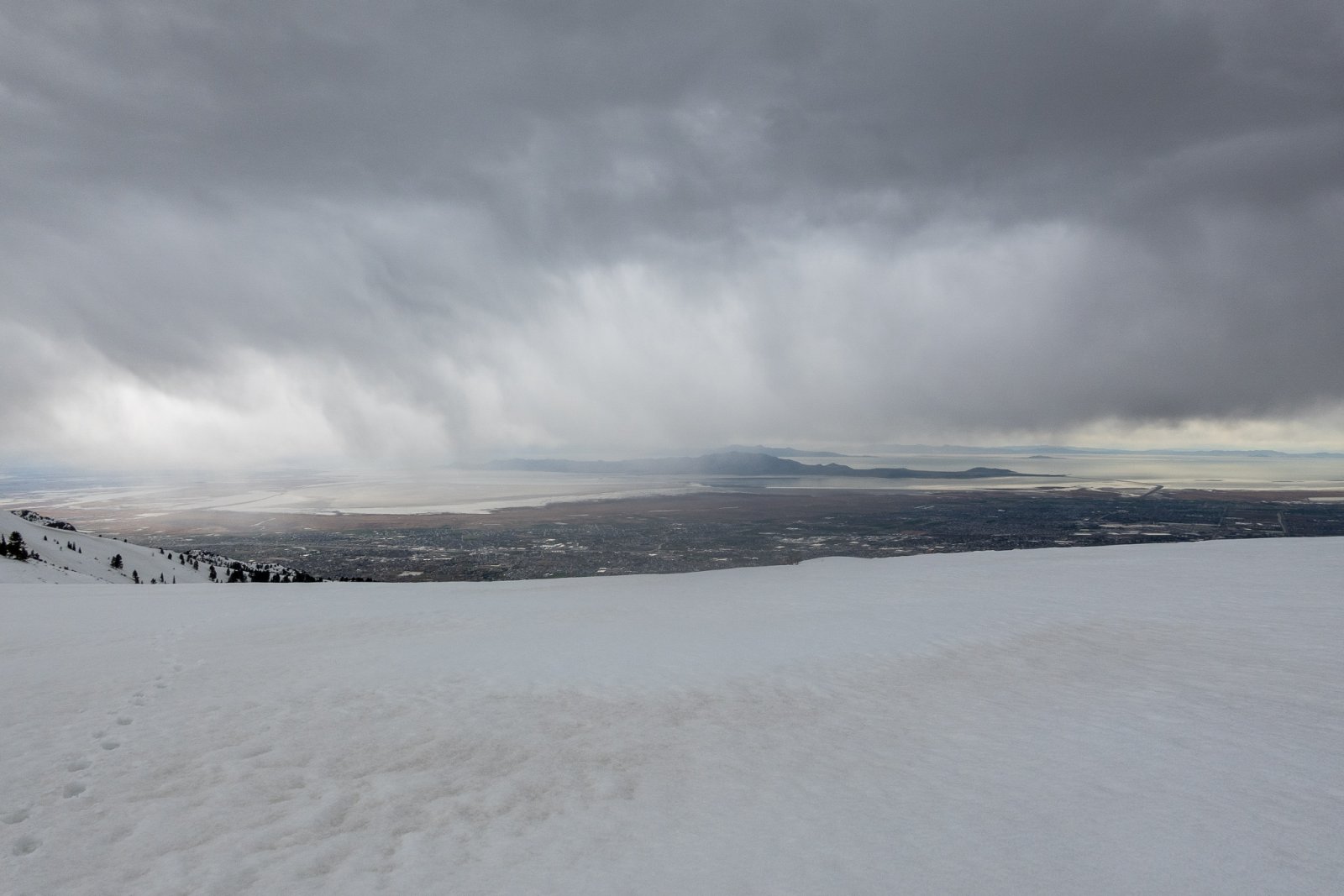 After pressing on I finally reached the ridge line overlooking Weber Canyon. The irony was this area was wind blown and snow free. It would be a much appreciated respite from the trudge. 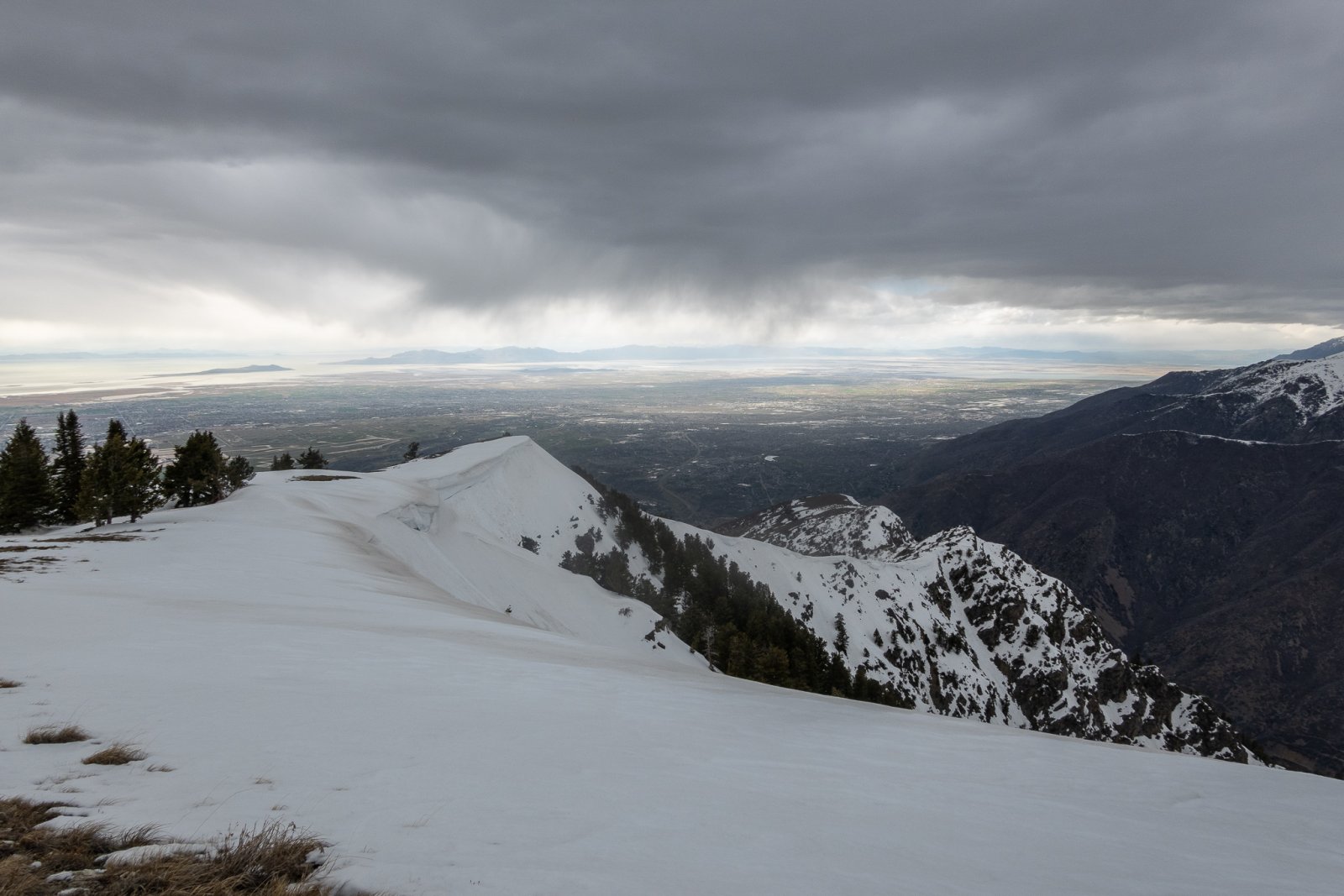 I stopped at a rocky outcropping on one of the high points to take a break and take in the views. Turning southward massive cornices loomed above. 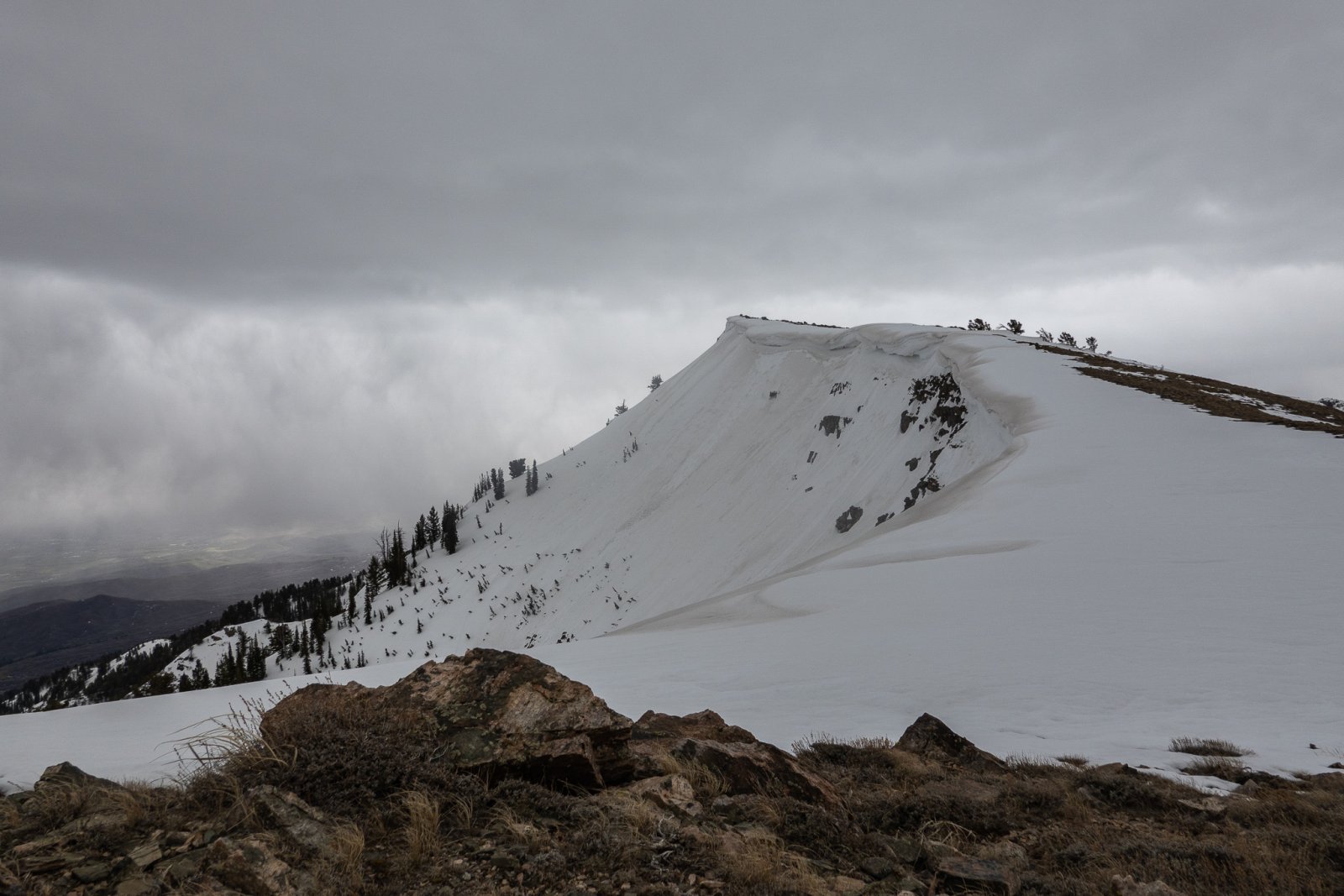 With the dangerous cornices everywhere I wouldn't be able to get close enough to see the bottom of Weber Canyon but I was able to have an almost 360 degree view of the area.

Looking northward I could see the Ogden area and Willard Bay. Directly across was Mt Ogden and Ben Lomond off in the distance. To the right is the Ogden Valley and Pine View Reservoir. 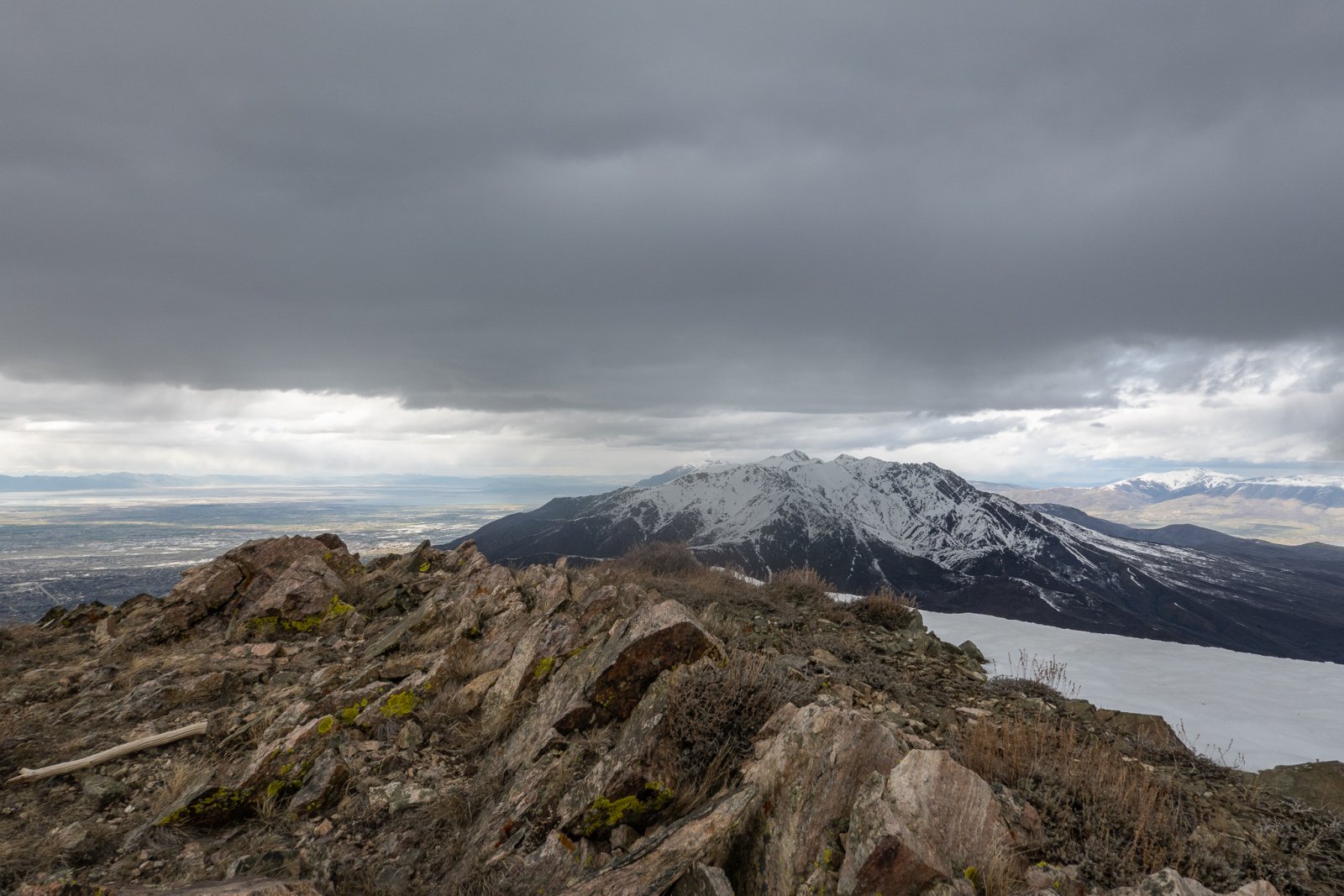 A view west with the Promontory Mountains on the horizon. 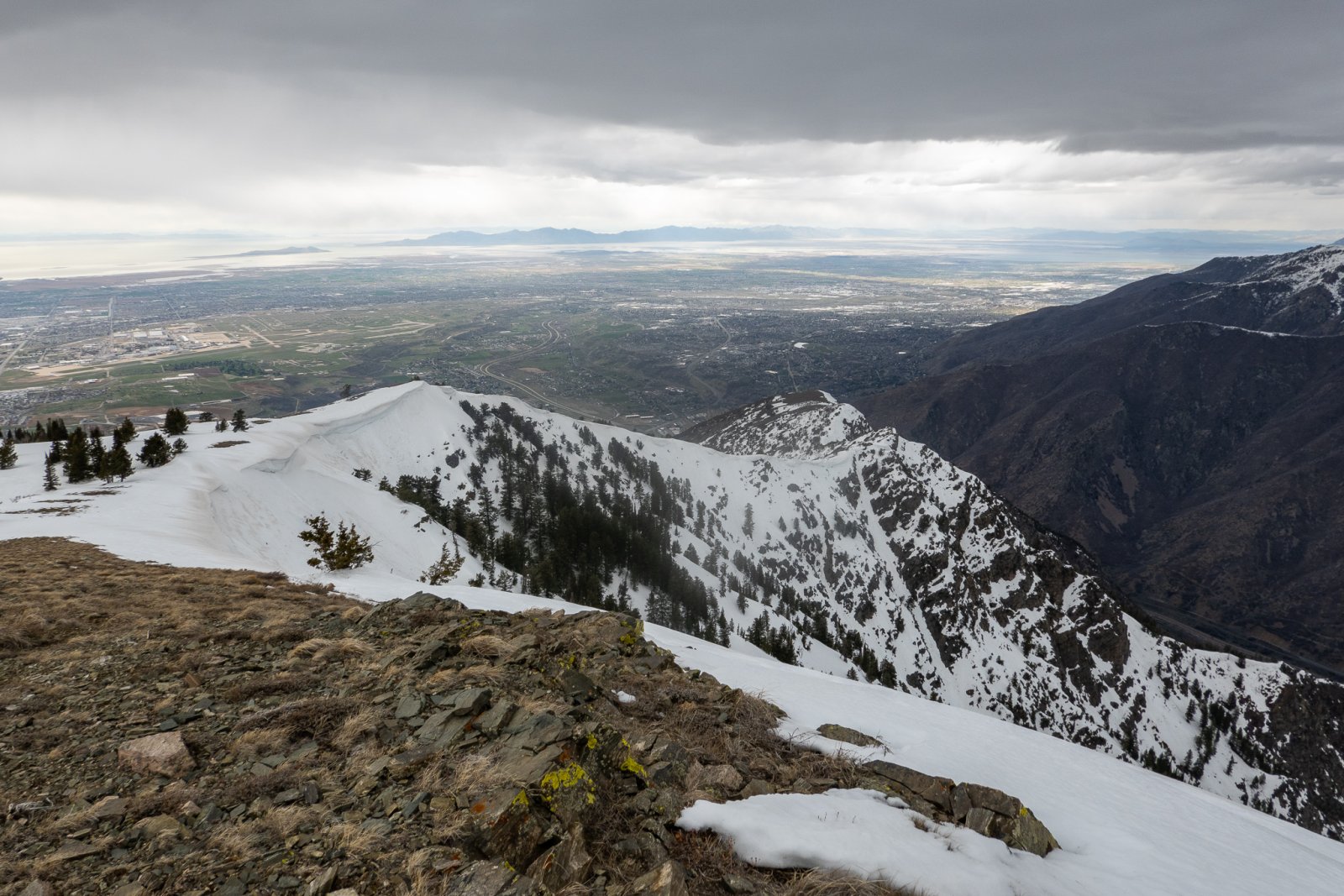 By this time the storm had come in a bit more with a cold wind and occasional flurries. Since I wouldn't be putting in quite as much effort heading down I ended up with two layers and my down puffy which felt pretty good by this time.

Back cross country for about 3/4 mile and back to the trail I headed down with more post holing. I had to be more careful going down hill as I have a habit of trying to rush. Didn't want to risk a leg injury.

I was pretty exhausted when I finally cleared the snow and was back on bare trail. I was finally able to remove my heavy layers. The trail continues on down getting steeper at this point. I took off my gaiters so I could tighten up my boots to try to keep from getting black toes.

In an effort to try to avoid some of the steeper parts that I had come up I decided to take a different path to get back to the Bonneville Shoreline Trail. I soon discovered this route was pretty much just as steep. It did end up with me facing to the south and I was fortunately able to see the descending sun peeking beneath the clouds, lighting up the valley floor with some beautiful colors. 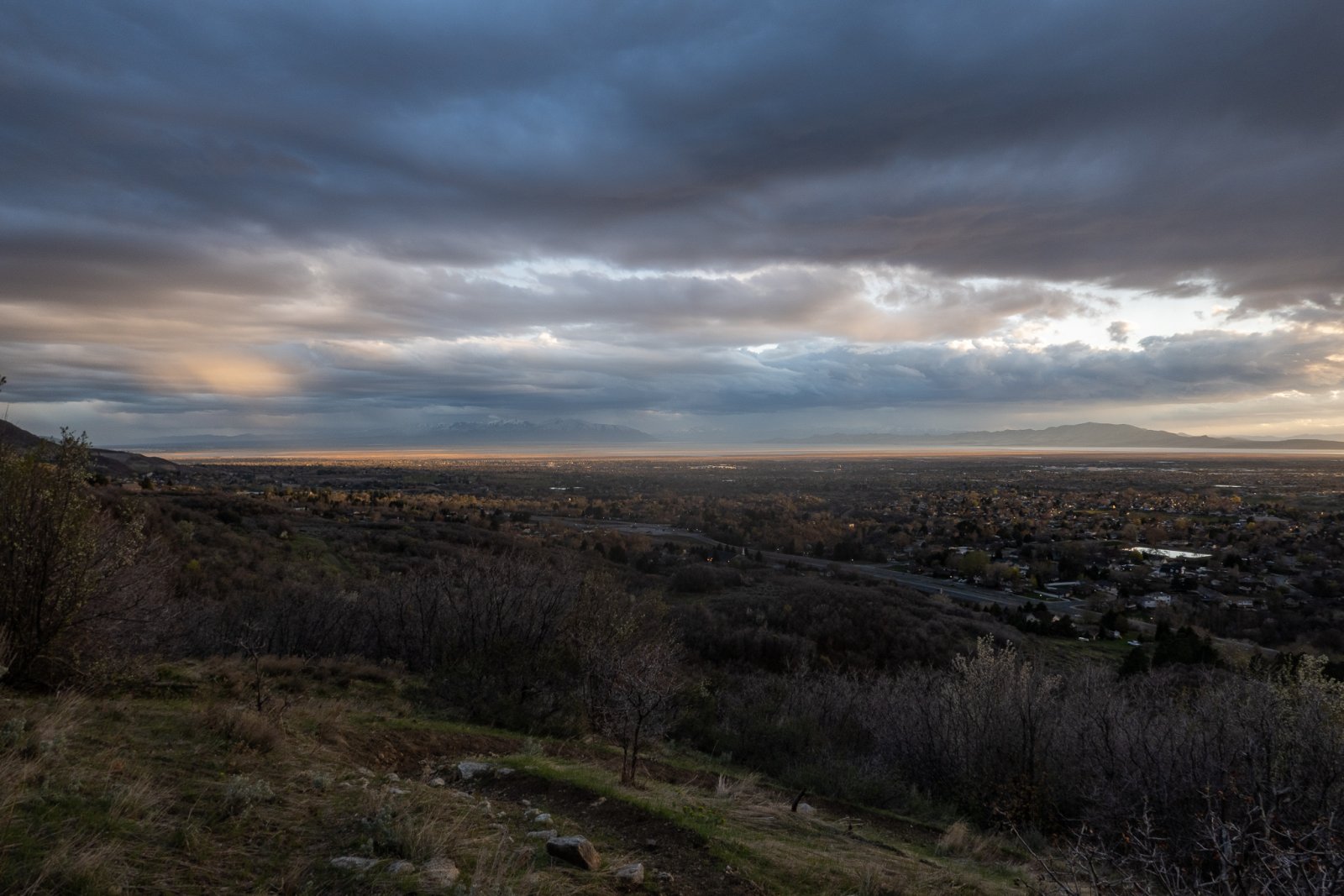 The trail swung back to the north where I was treated with some nice light on Willard Peak and Ben Lomond. 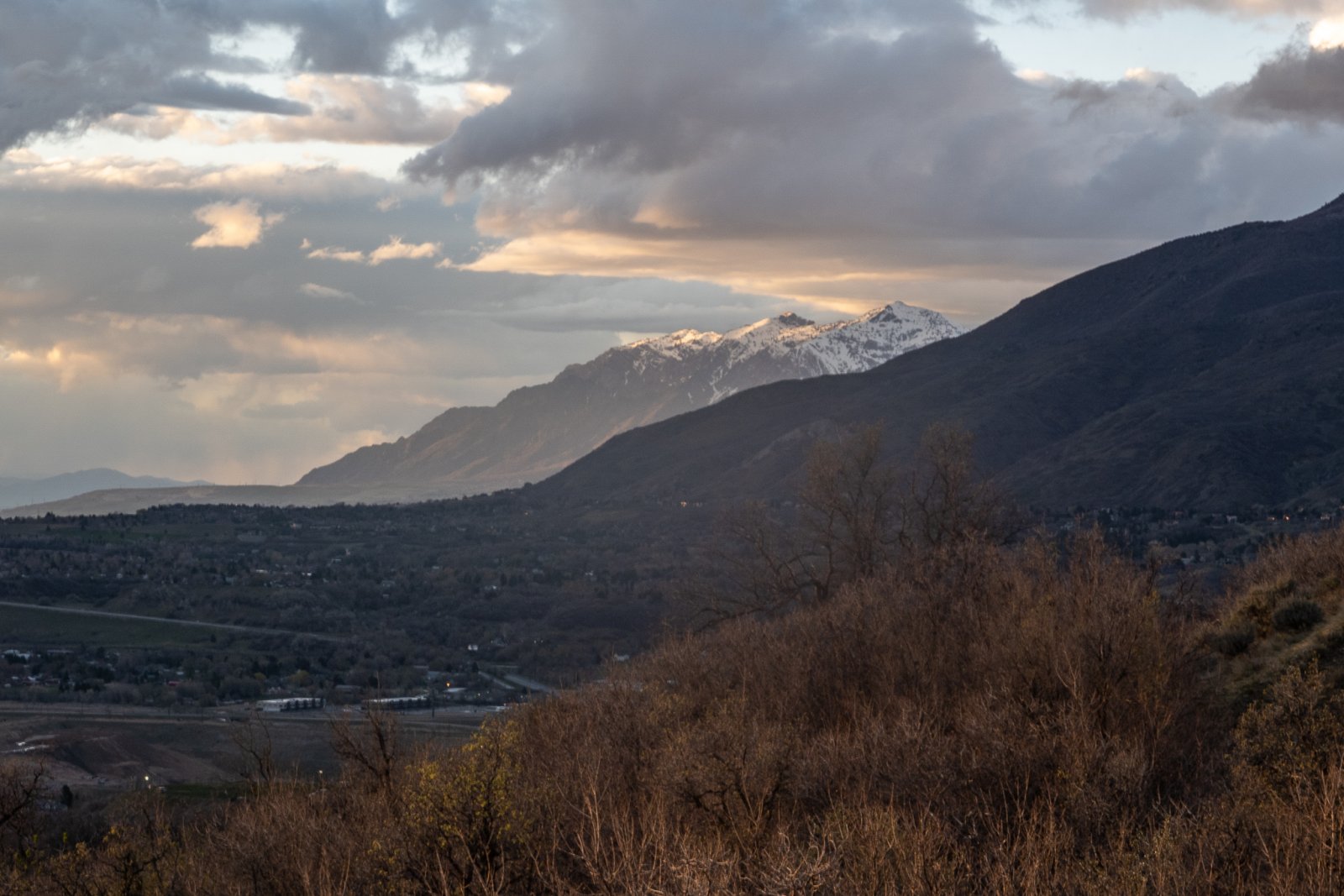 The next day I took this picture to see where I had traveled. The rocky outcropping is located on the bare ridge line just left of center. 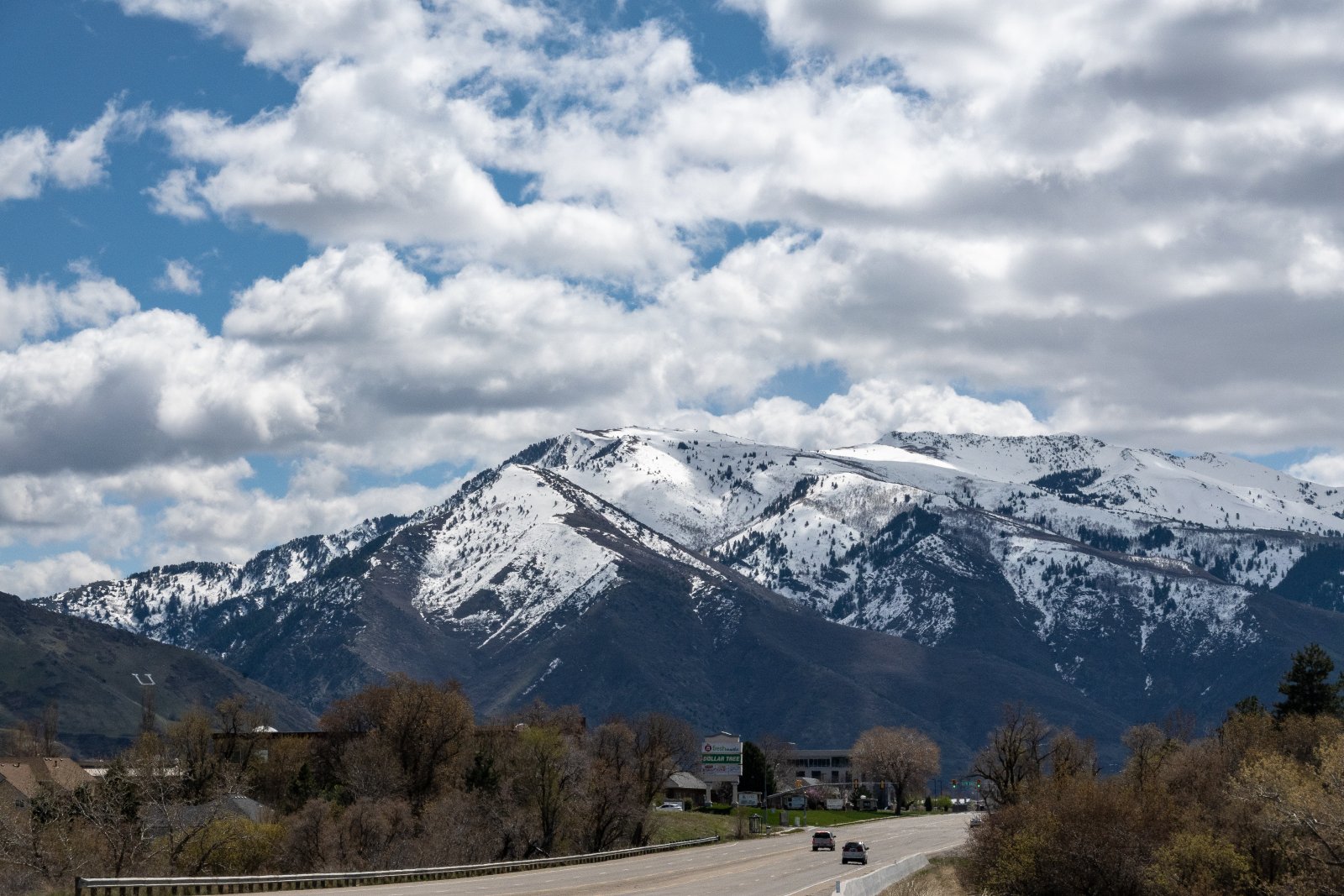 All in all I completed 10.2 miles with 3,900 feet of elevation gain. It was exhausting but I felt accomplished I had reached my goal. Reconnaissance successful!
Last edited: Apr 12, 2020

That's a pretty burly trail. Steep, brushy, but with great views. That piped spring is just absolutely magical. Thanks for the report!

love all that snow!!!! Makes me happy as it is so hot down here in Southern Utah
http://yvonnebaurphoto.smugmug.com/

Sure is nice to get out. Good thinking on the downhill, getting a leg or hip swallowed with the wrong momentum in the spring slurpee can put a damper on summer plans.
I have looked at that ridge, intrigued, a few times from my brother's backyard, but I have only ever hiked on the backside.

Yeah, that sounds exhausting, but fulfilling.

Amazing view of the valley floor as the sun was heading down!

Amazing view of the valley floor as the sun was heading down!
Click to expand...

Thanks. It was pretty tough, leg muscles are still complaining today, but I feel like I've "learned" how to to push through and get it done. I hate having to turn back when it get's tough.
You must log in or register to reply here.
Similar threads