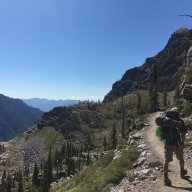 Three kids from Massachusetts heading into the wilderness.

My cousin Dan and I have been backpacking together for a couple of years. Last summer, our family wanted to take a trip out to Yellowstone. They wanted more of a relaxed, chill, vacation style trip. Dan and I decided we'd drive out there, do some backpacking before, and then meet up with them for some family time in the park.

We dragged along our buddy Tyler for the trip. This would be his first time leaving New England besides a one off trip to Disney World, but he's always down for anything.

We took three nights driving out to the area, then spent two nights in Grand Teton NP before embarking on what would be a total of five nights in the backcountry. The first two nights were spent in the Grand Teton NP wilderness, then directly into a three night trip in the Black Canyon of the Yellowstone. A pretty ambitious itinerary but we had to make every day count.

The Lead-Up
We allocated four nights of our trip for Grand Teton NP. By the time we got around to booking, most backcountry permits were already filled up. We wanted to see the main sights but also, more than anything, get away from the crowds for true solitude. We settled for two nights camping in the frontcountry, then two nights in the backcountry. We got permits for the Webb Canyon/Owl Canyon area. It's a pretty remote area, tough to get to. The only way to hike in is about a 7 mile hike starting from the Glade Creek Trailhead. However, it's only about a little less than a mile across Jackson Lake from Lizard Creek campground. This sounded like not only the quickest route, but also the best adventure. So, our plan was to boat across Jackson Lake into the wilderness, spend two nights, then boat out. 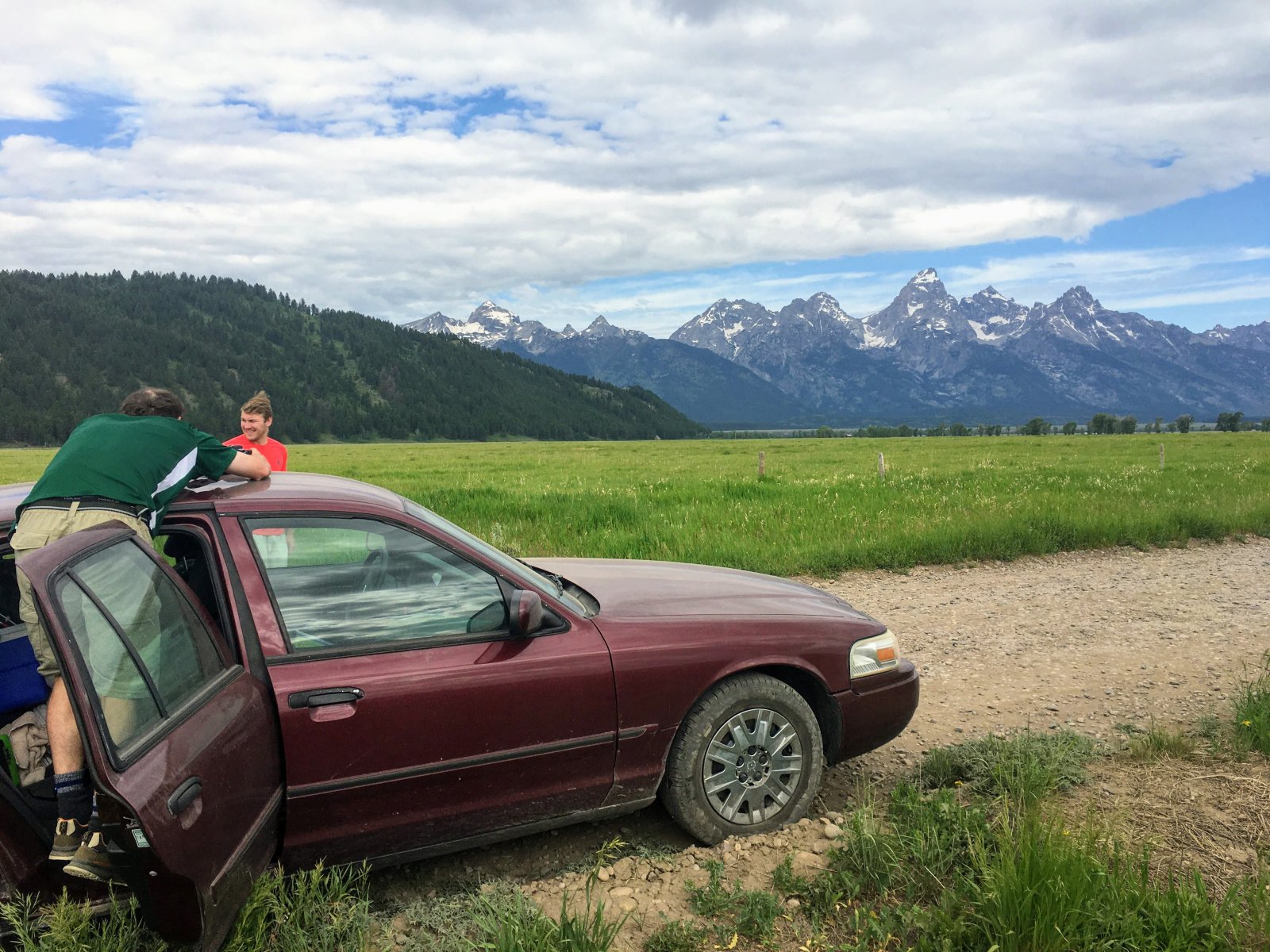 Obligatory shot of the Teton range on the drive up from Gros Ventre.

Day 1
We had been staying at Gros Ventre campground the night before we began. After packing up, we headed to Colter Bay visitor center to pick up our permit. We double checked with the rangers that we could park our car at Lizard Creek and boat over from there. They said there would be no issues. No one else had any permits reserved for this part of the park. "You can really go anywhere you want" is what they left us with. Now that sounds like an adventure. Tyler was already anxious about his first real backpacking trip and this did not help with the nerves. I was hyped up.

From Colter Bay, we headed north up to Lizard Creek. The camp host was a little confused on what we were doing, but after plenty of explaining and showing our permit we were all set. We parked up at the boat launch and started inflating our rafts. That's right, we planned to travel across Jackson Lake in two dinky little inflatable rafts. At least they didn't take up too much space for the drive out from MA. 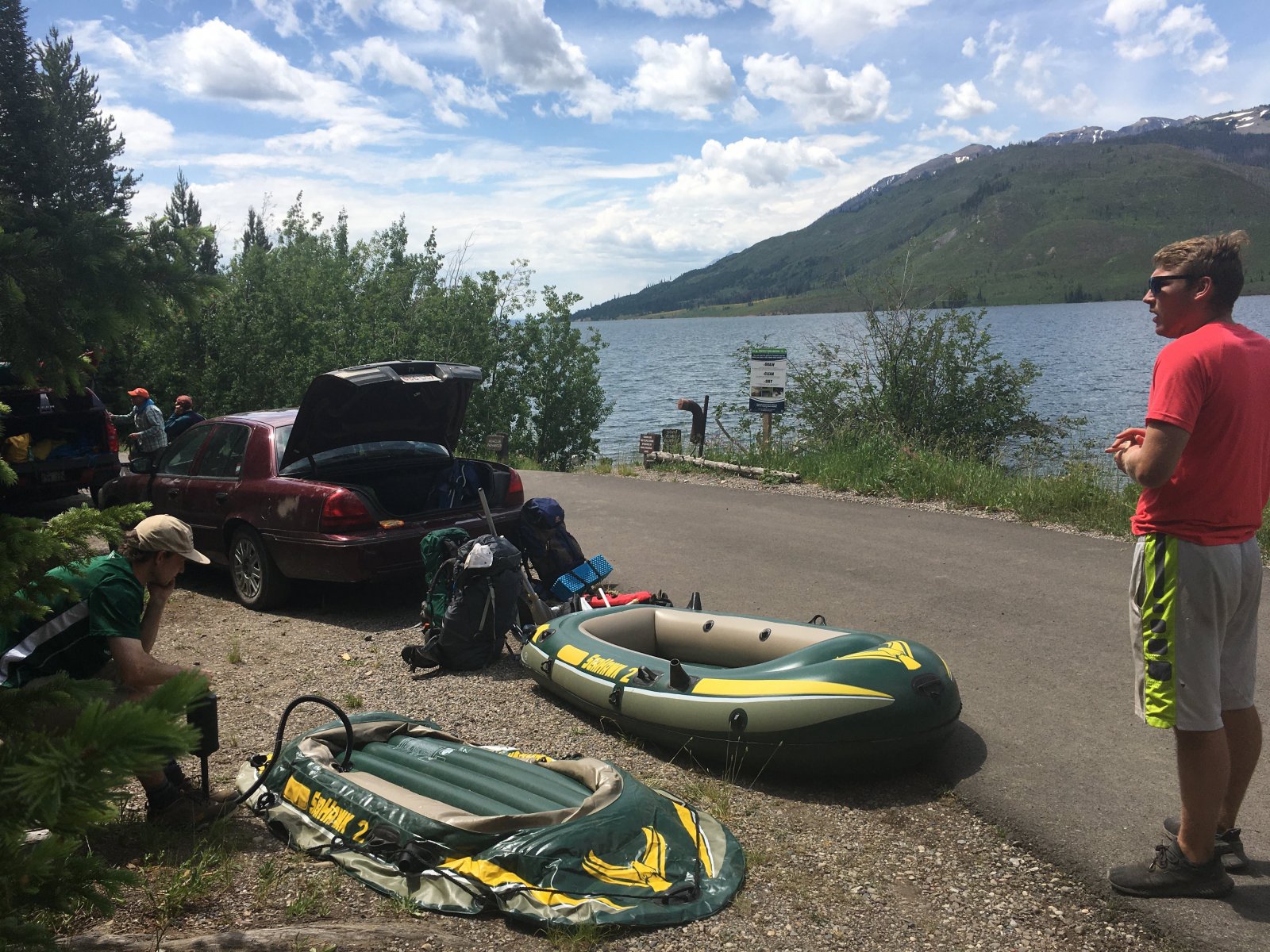 Patiently waiting for our rafts to inflate. Tyler's got the nervous yawn going. Who knows if these flimsy little rafts can make it across?? 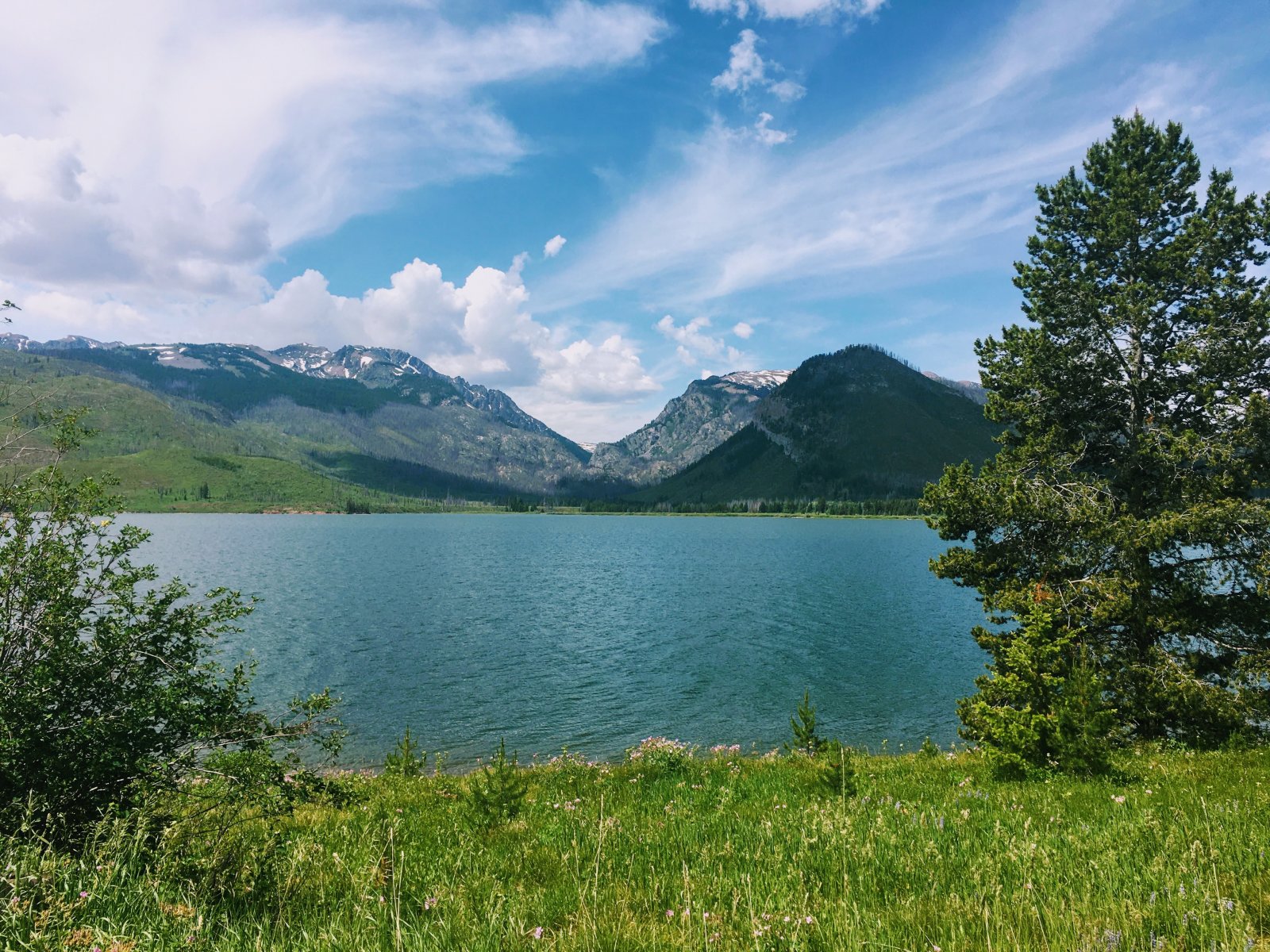 Webb Canyon, our destination, from the Lizard Creek boat launch.

While we were inflating the rafts, we helped some folks carry their canoe in. They were very confused what we were doing with the rafts. They wished us a discouraging "good luck" after telling them our plans. We fueled up then hit the water for the half mile paddle into the wilderness!

Tyler and I paddled over with my backpack in one raft, while Dan had the other two packs in his raft. The journey across took us a little under an hour. We took our time. There was a guide post and the docking point and a nice little beach that made it easy to get out. We docked our rafts and tied them up on shore to some drift wood, as recommended by the rangers. 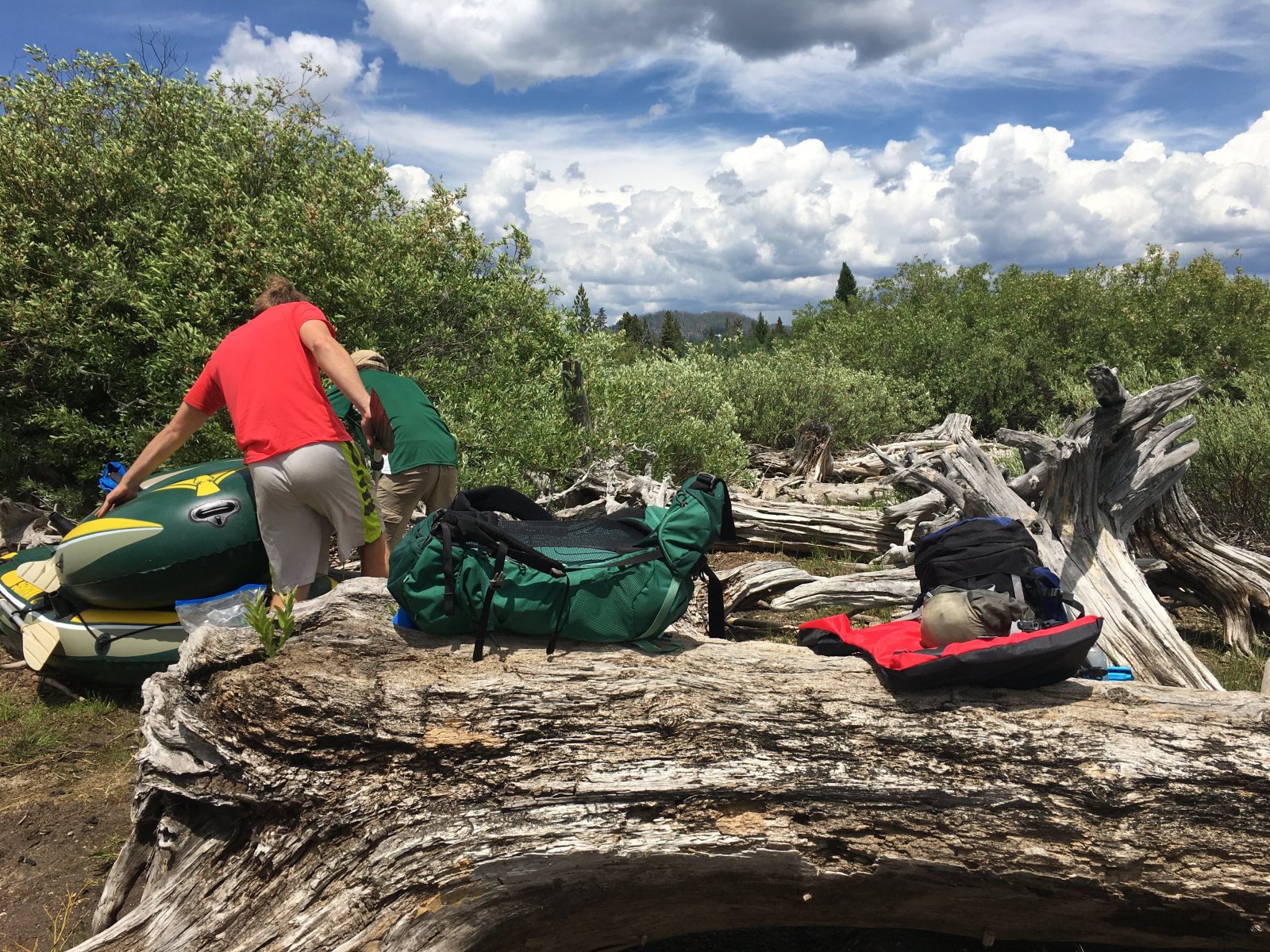 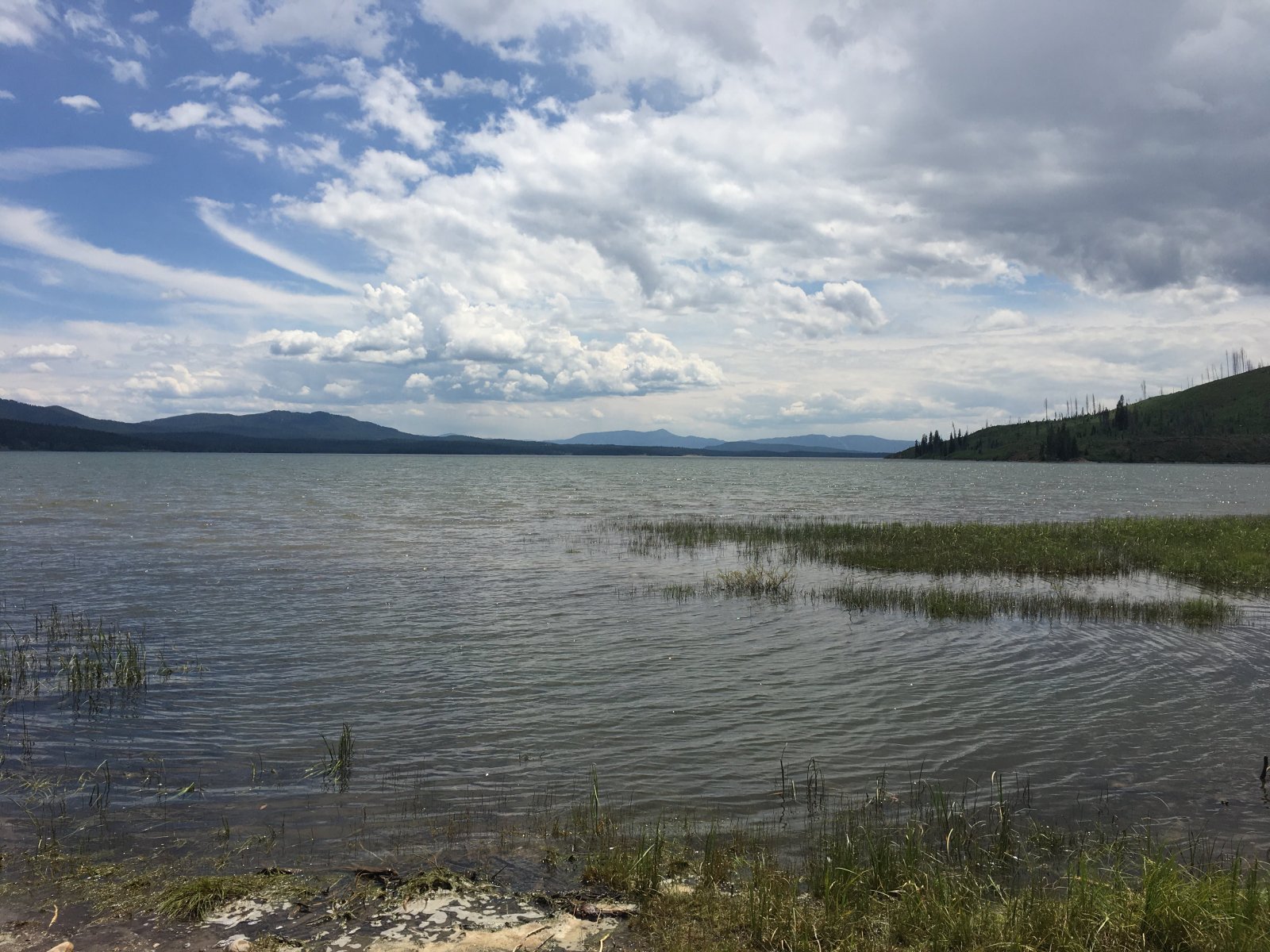 The view after paddling across the lake.

This was it! The hard part now over, it was time to enter the backcountry. The path from the landing was clear, though still a bit muddy. After less than five minutes of hiking we came across the Berry Creek Ranger Station and the official trail markings. The trail marker pointed one way to the Webb Canyon Trail, the other to the Berry Creek trail and Owl Canyon. The plan was to do an out and back into Webb Canyon, hiking until we found a suitable spot for the night, then coming back and camping near the shore the next night.

We headed west on the Webb Canyon trail, immediately opening up into a large field full of wildflowers. The trail mainly follows Moose Creek through the canyon. After going through the field, we had to cross Moose Creek. The water was about as deep as we expected. There was a clear crossing point and previous hikers had left guide sticks to help us through. 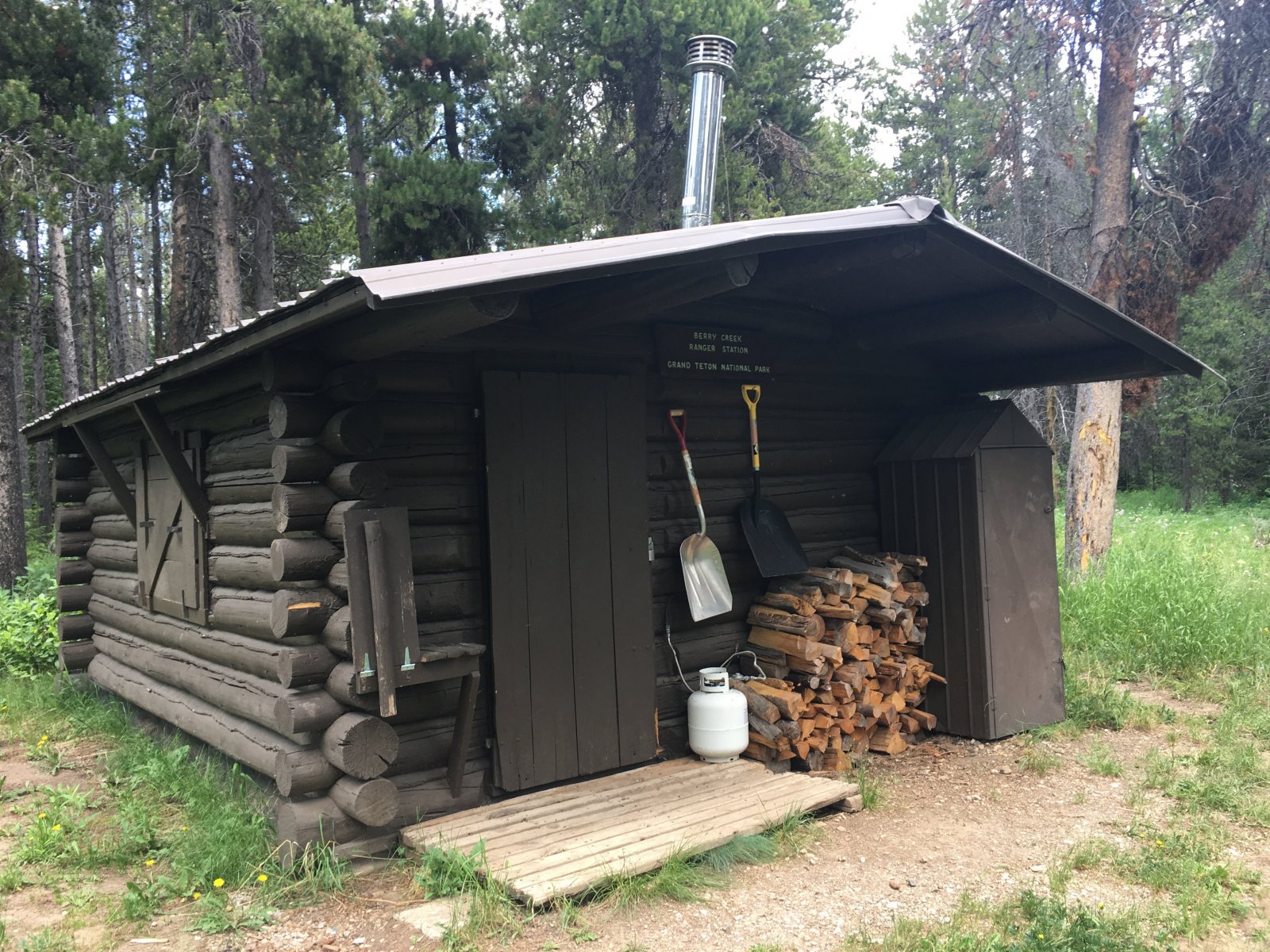 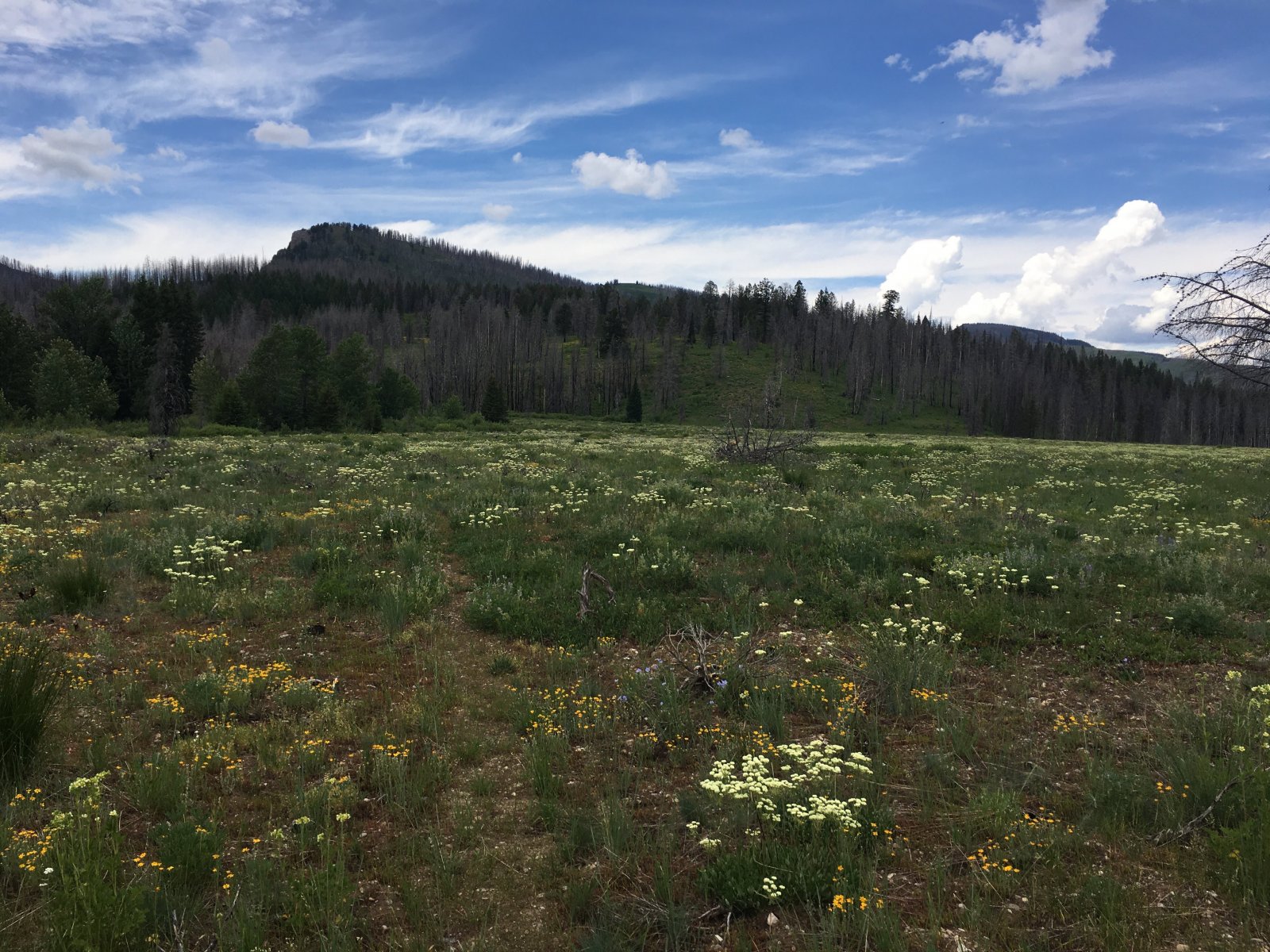 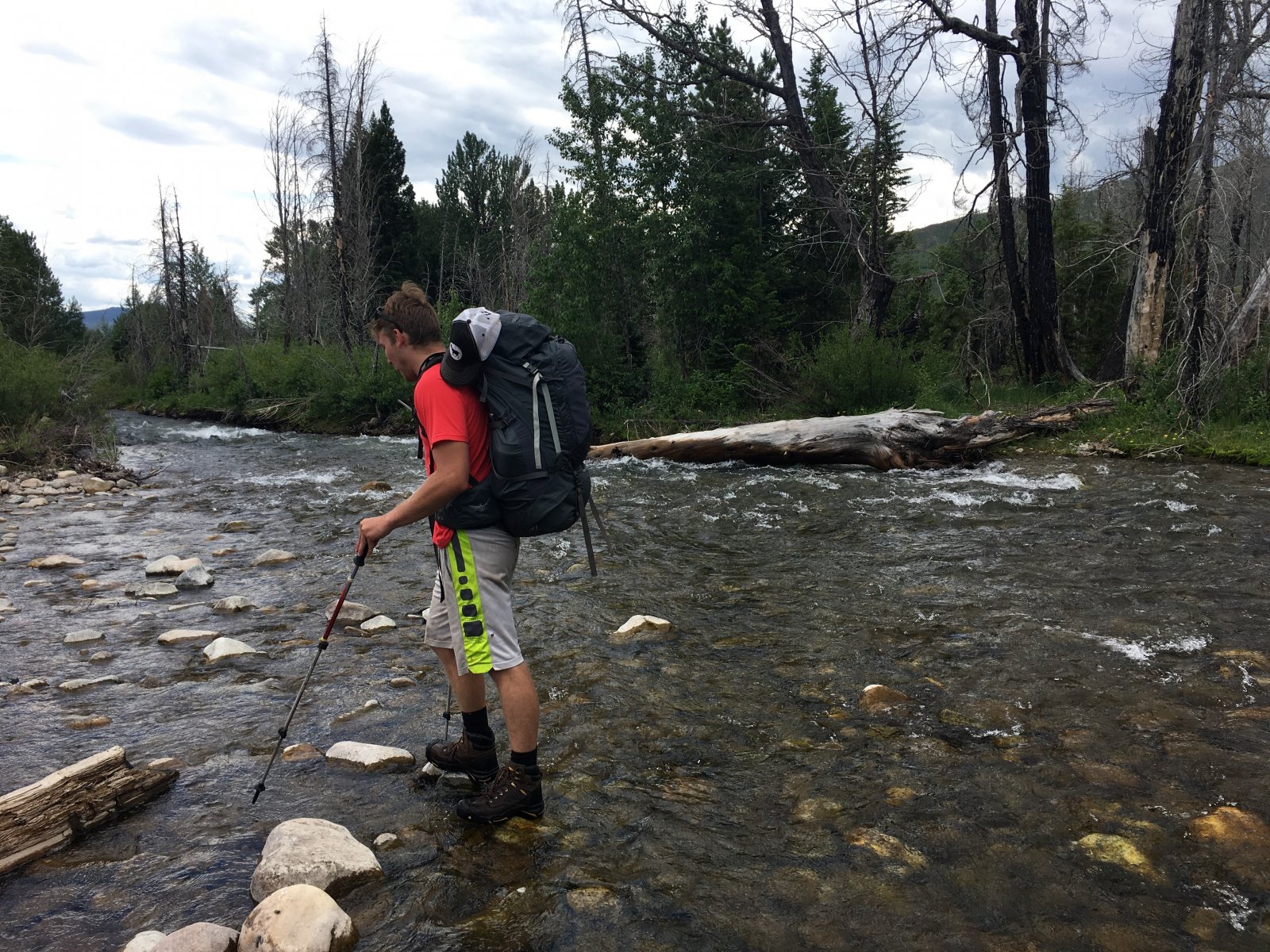 After crossing the river, we crossed through another large opening of wildflowers. The trail then started a slight incline, which it would continue for the rest of the hike, into the canyon. We could see the river running parallel to us and had a great view of Jackson Lake behind us. 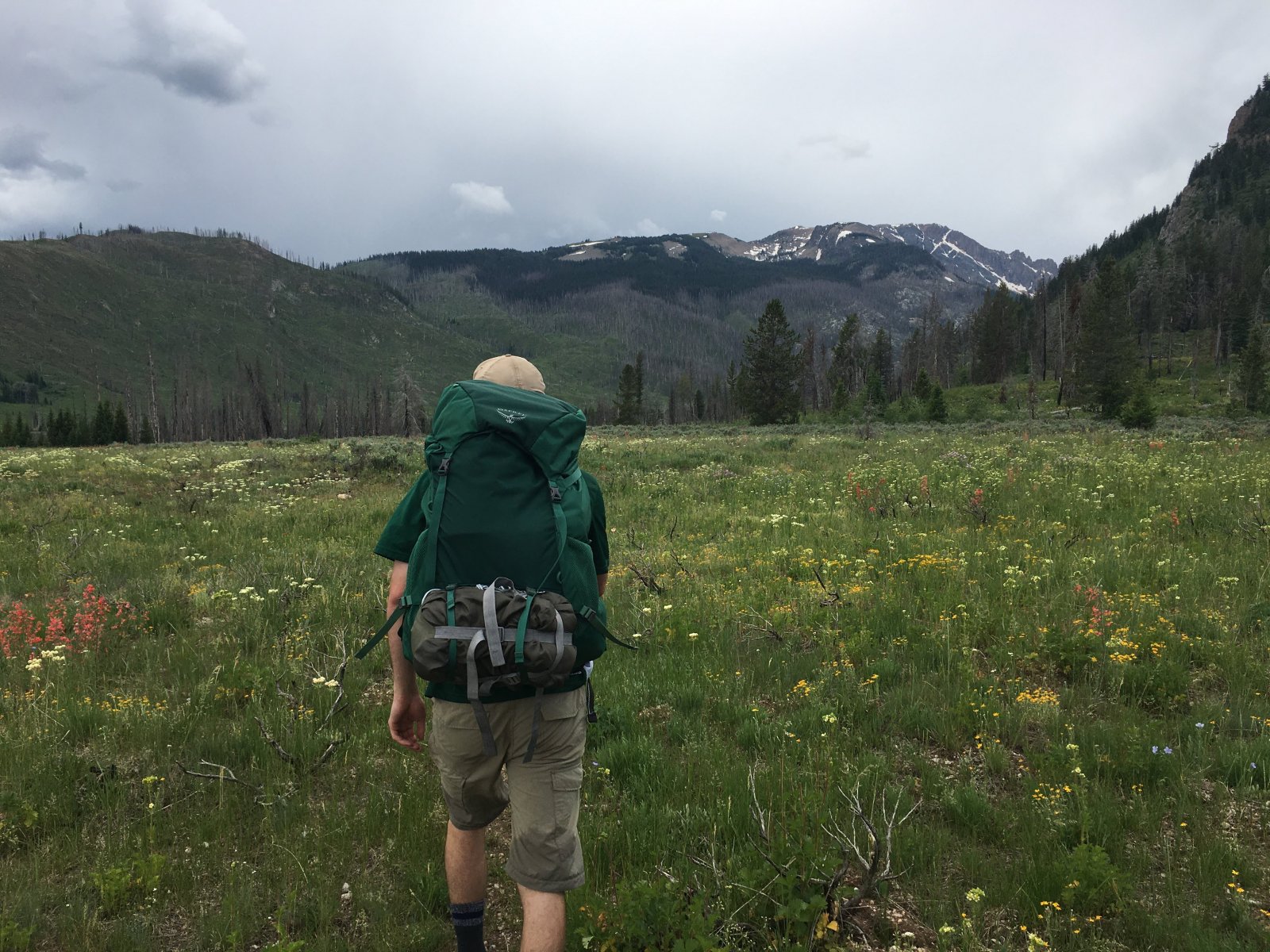 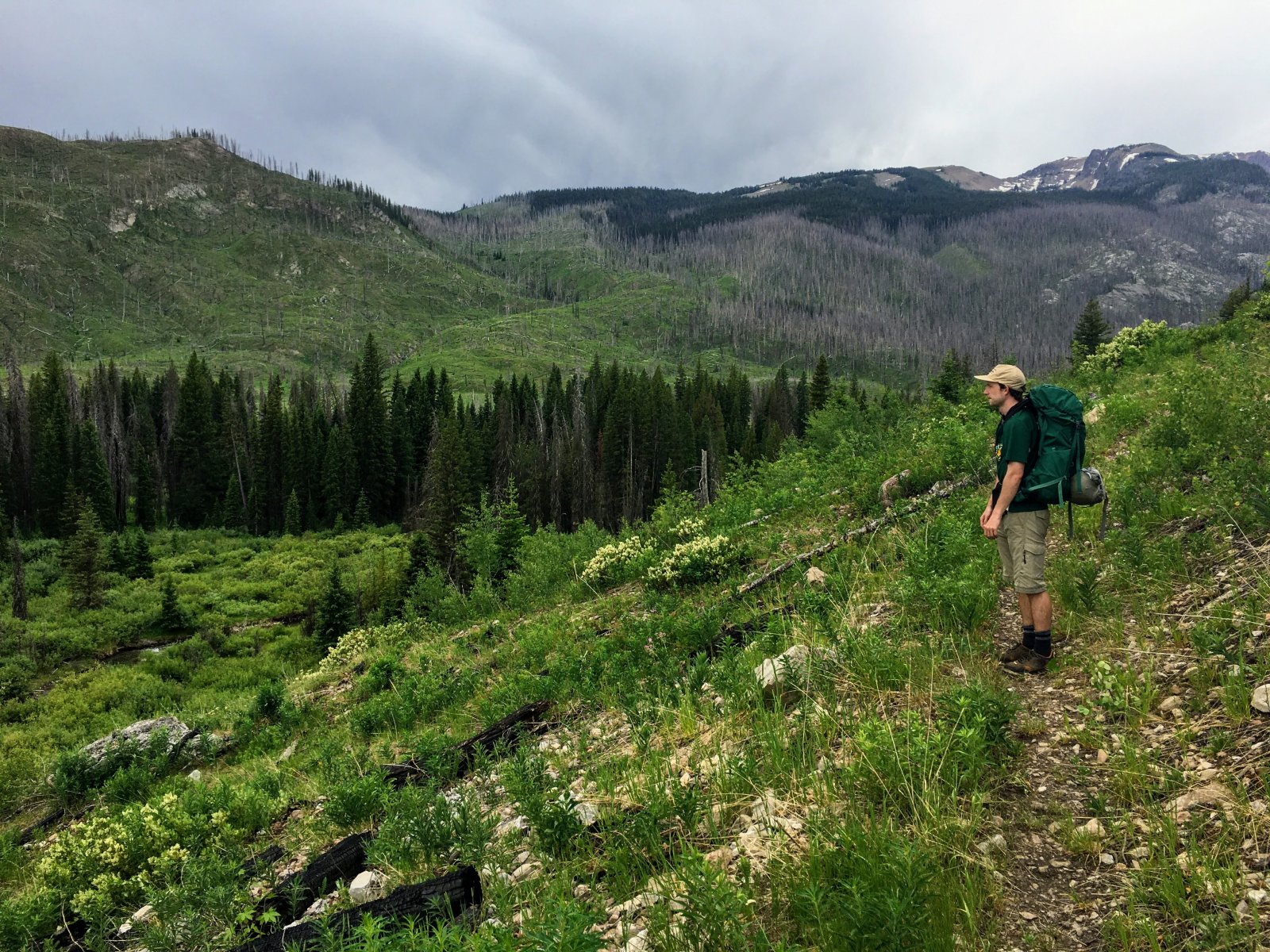 Dan admiring the view as we enter the canyon.

The trail led us on a ledge inside the canyon with great views of the river. After about a mile and a half, we were hiking through thick lodgepole. In 2016, a fire ripped through much of the area. Everything we saw on the other side of the river was burned.

The trail started to get a bit steeper, and that's when we started to look for a good spot to set up camp. We soon came to a large rocky clearing. We found a nice flat spot to set up the tent and an awesome rocky peak to hang out on. We clocked in at 3.1 miles and 784ft of elevation gain. A good hike to ease into things. 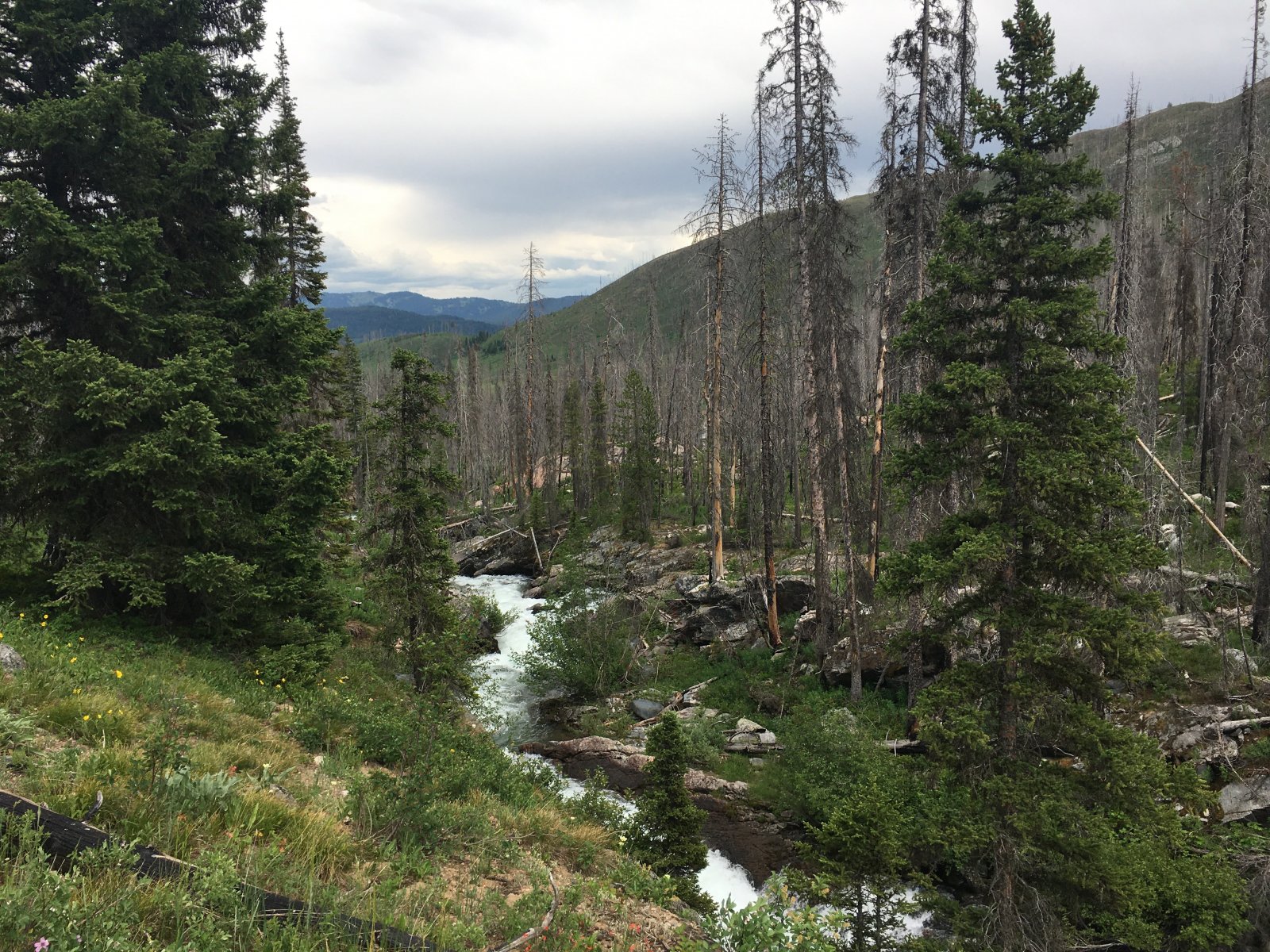 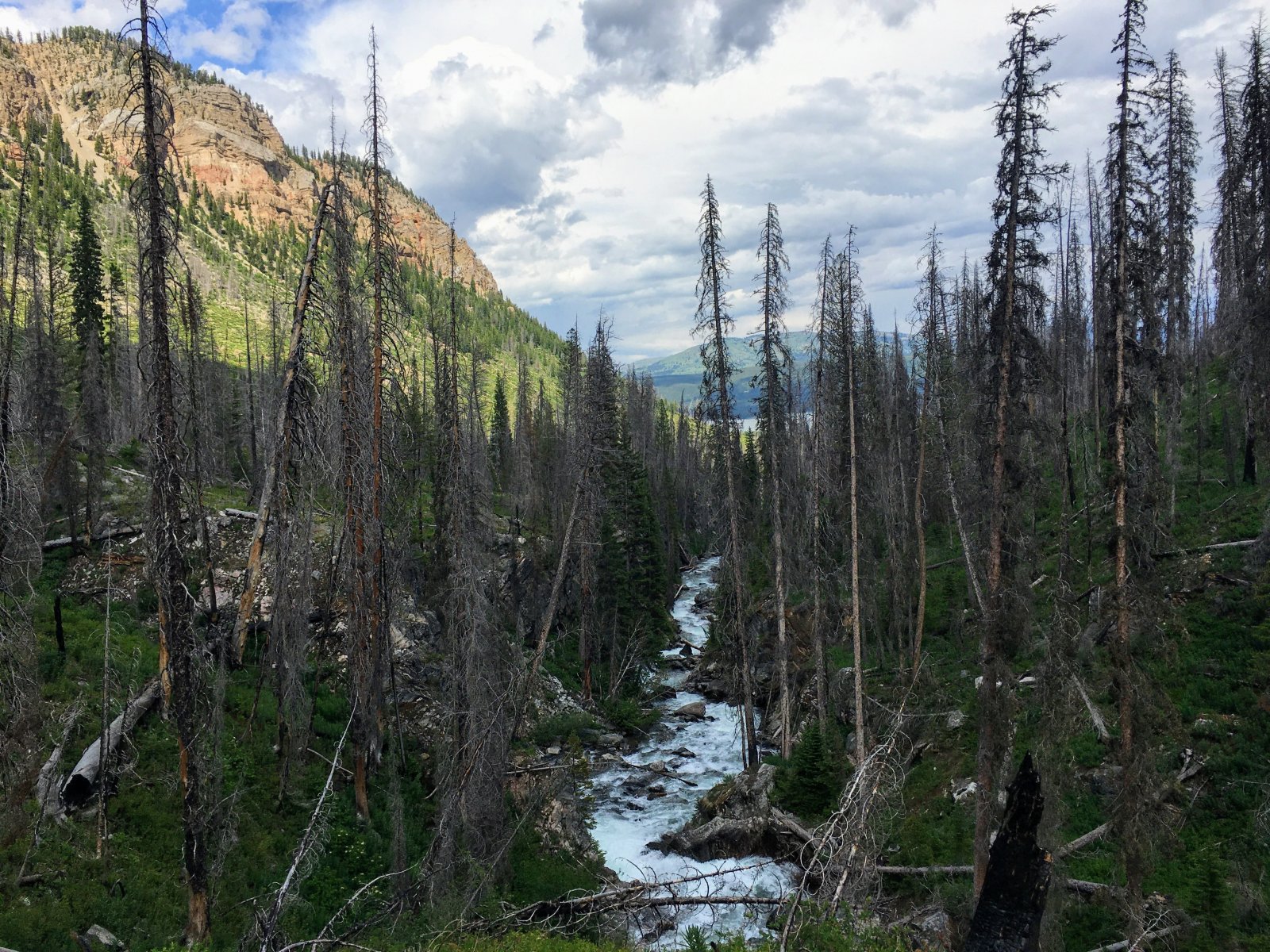 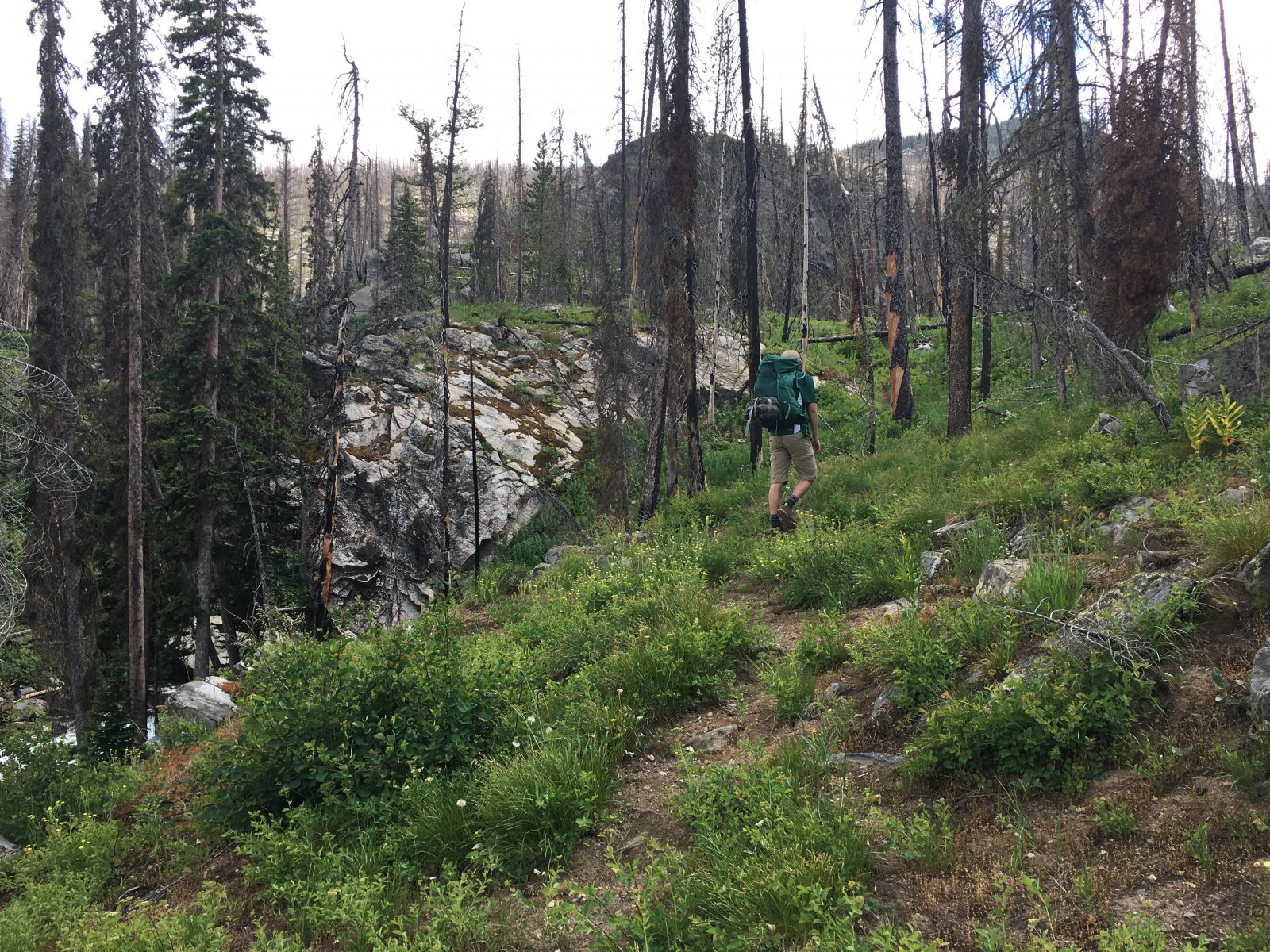 Before setting up camp, we scrambled up to the top of the rocky peak and admired the awesome view of Jackson Lake looking out of the canyon. It felt great knowing that we finally made it into the wilderness. After enjoying the view for one too many minutes, we looked up and saw some dark clouds to the north. Very dark clouds. Tyler is no seasoned backpacker, but he knows a storm when he sees one. "We better start setting up that tent," he says. We stashed our bear cans and instantly went to work on the tent. In no fewer than three minutes, we started to hear the rain coming. Then we felt it. It wasn't just rain, but hail. We quickly finished setting up the tent and hopped inside to wait out the storm, playing some cards in the meantime. 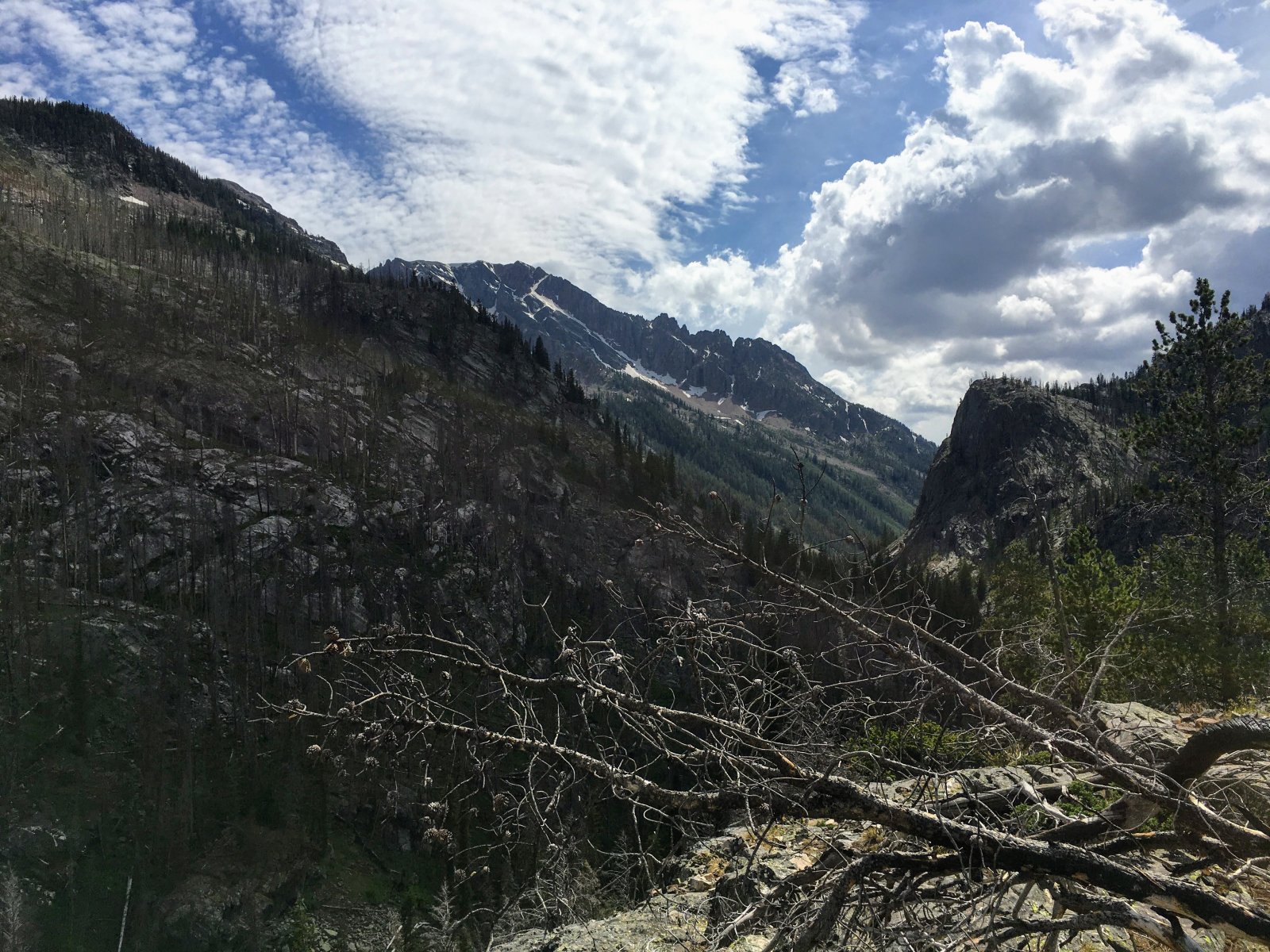 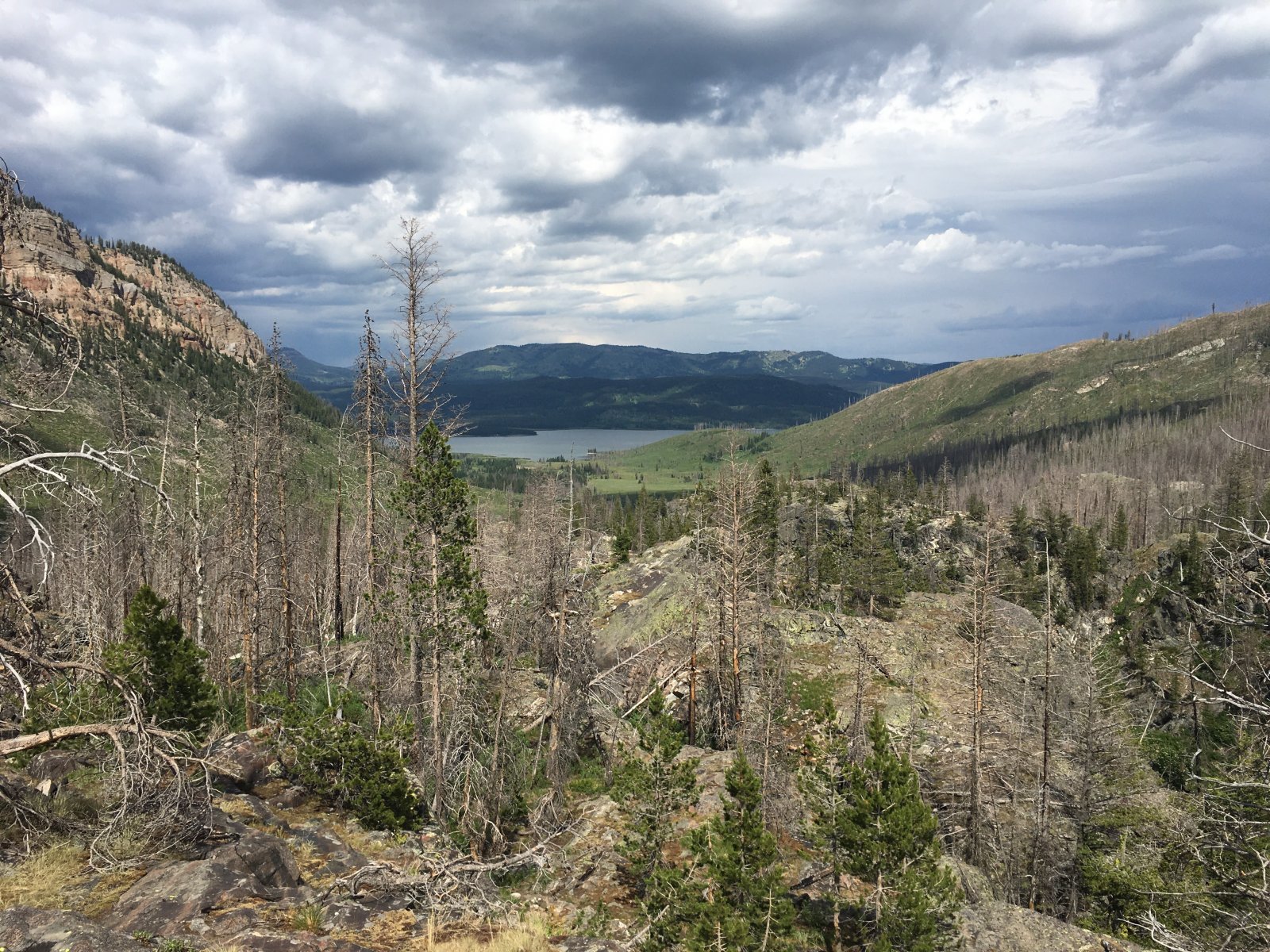 What a beautiful view of Jackson Lake. 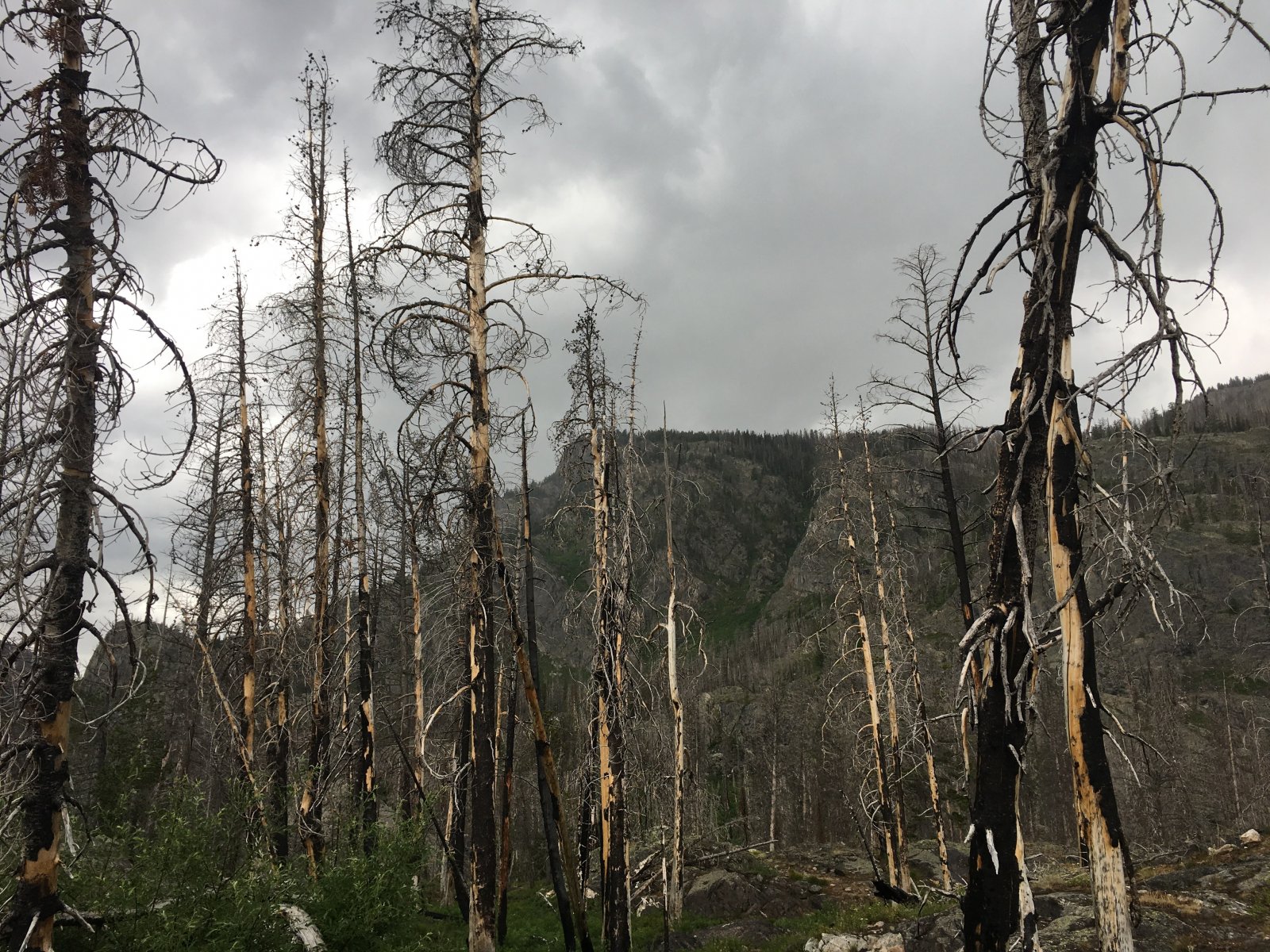 Hey it does look a little dark over there. 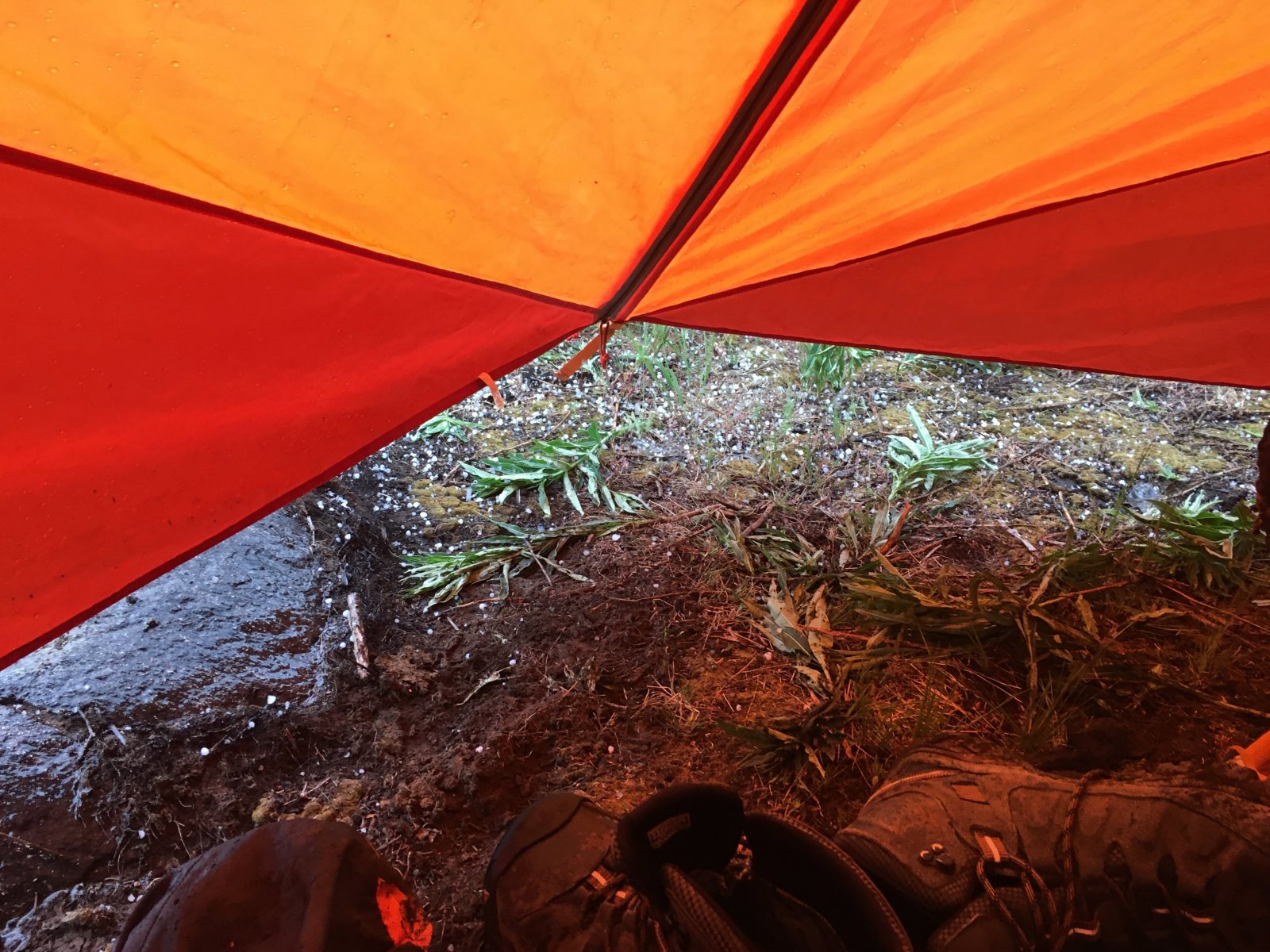 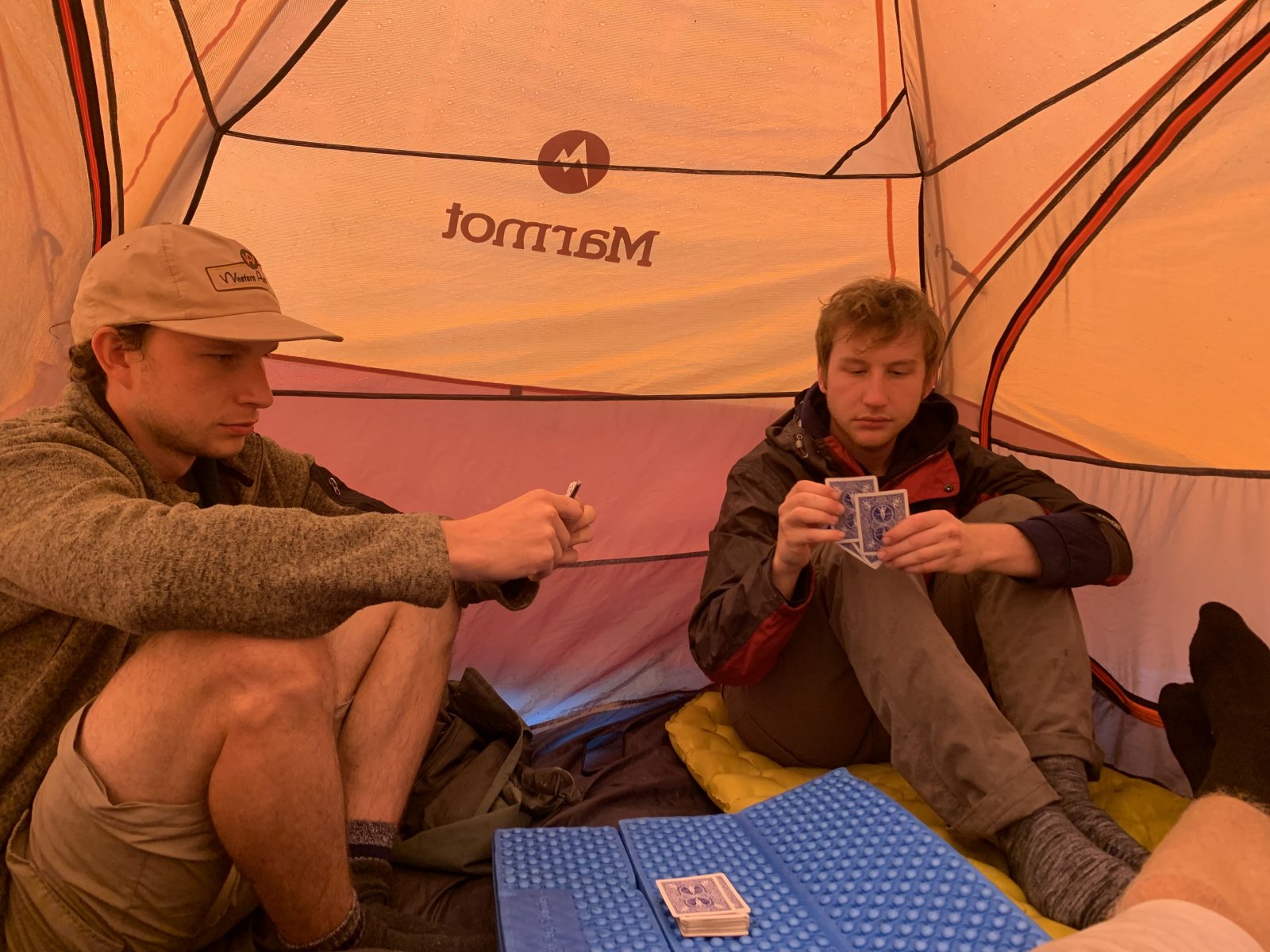 Me and Dan patiently waiting out the storm.

Just as we started to get hungry, we finally heard the hail start to let up. We emerged out of the tent and took in the view again. That view would never get old. 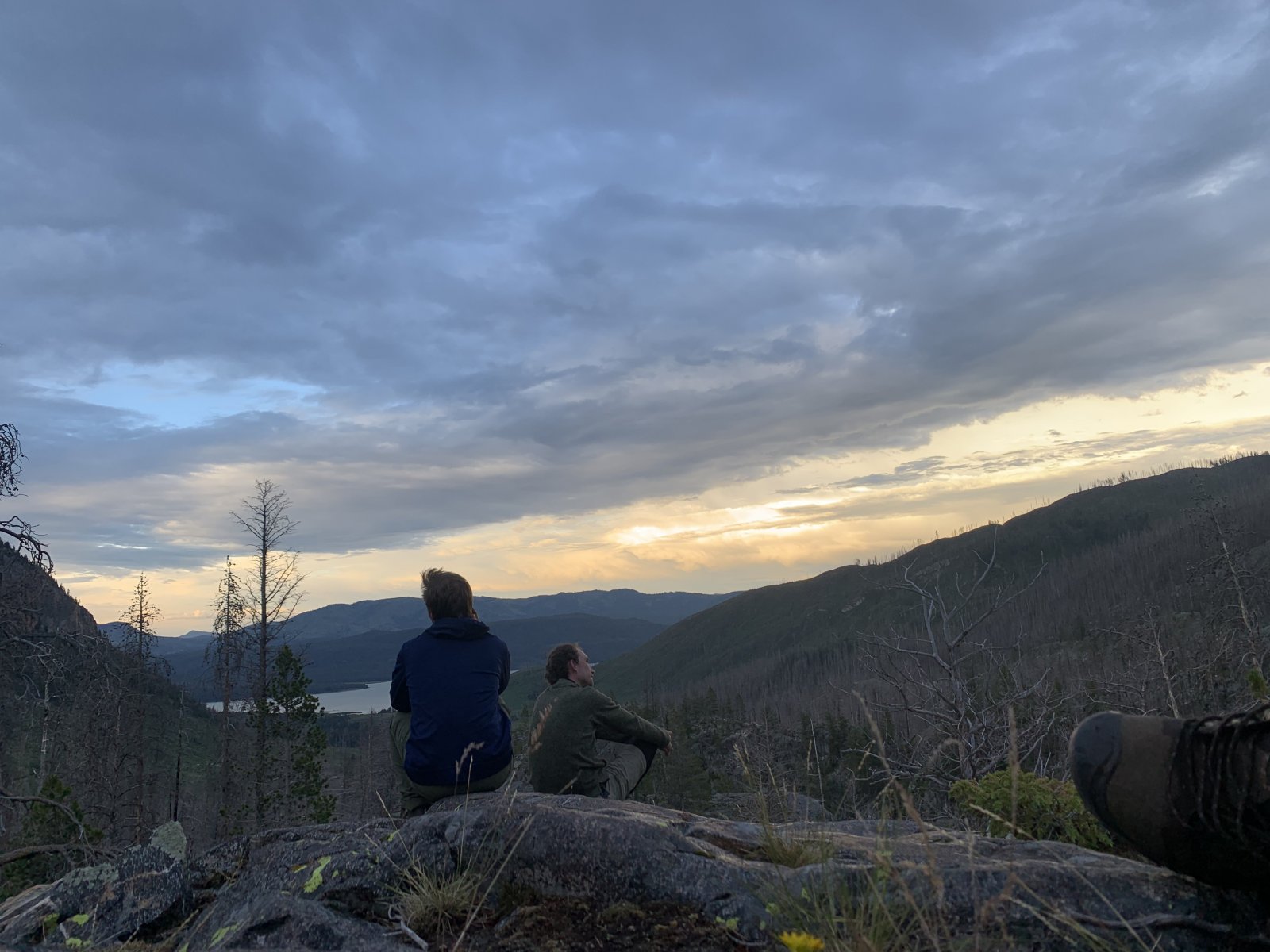 After cooking dinner, we hung out on the rocks for the rest of the night, watching the sun set over the lake. A very successful first day in the backcountry.
You must log in or register to reply here.
Similar threads