Clark Mountain, at nearly 8000', is the high point in Mojave National Preserve. It's a lofty bastion of limestone with a complex topography involving numerous radiating ridges and precipitous basins. The mountain is covered in single leaf pinyon and juniper, plus the typical assortment of prickly desert species on the lower flanks. Several shady canyons on the north side hold huge stands of white fir, a rather uncommon phenomenon in these parts.

While relatively close to Interstate 15 between the Nevada border and Baker, access to Clark's south side trailhead is a complex affair. An ever evolving mining operation near the freeway exit changes the public right-away on a regular basis, depositing visitors back onto public lands in unexpected places. Add to this the rugged state of the deteriorating network of roads and quite a few hikers have given up even setting foot on the mountain. At the end of the drive is a forgotten relic of a picnic area, amazingly well equipped with unused luxuries, slowly falling into decay. In itself worth a visit.

The occasional steep wall or pinnacles of grey rock rear up along most prospective summit routes, meaning succesful summiteers better come prepared. From the picnic area we picked a well defined, pleasant looking ridge that seemed to rise unbroken to the main divide. The day before our climb on December 14 a furious winter storm had made it in from the Pacific and dropped several inches of snow above 6500'. The blasting winds had formed bizarre ice sculptures along exposed edges and covered the trees in beautiful rime frost.

Once on the summit ridge at 7600' it became obvious that although almost all the elevation gain had been dispensed with, the more serious portion of the route still remained. Towers of jagged limestone lead to overhanging drops along the complicated arete between us and high point of Clark. We first tried a direct route along the ridge, but iced over holds and wind blown snow put a halt to that. Forgot to mention we also had a dog along!

After circumventing several hard section via ups and downs of only slightly milder terrain, we came to a series of walls that very clearly had no bypassing options. The first step, about 40' tall, needed ropes to get the dog safely up and facilitating later return. After this crux more slow scrambling on snowy ledges with some considerable exposure, still belaying the dog, took us to the final push to the elusive summit.

The register had 4 other parties summiting in 2014, and since 1995 only about 25 pages had been filled out.

We were nearing the end of a road trip and had no juice left in any of our cameras. As we were leaving the van for the hike we remembered our iPad can take pics too! So here you go: 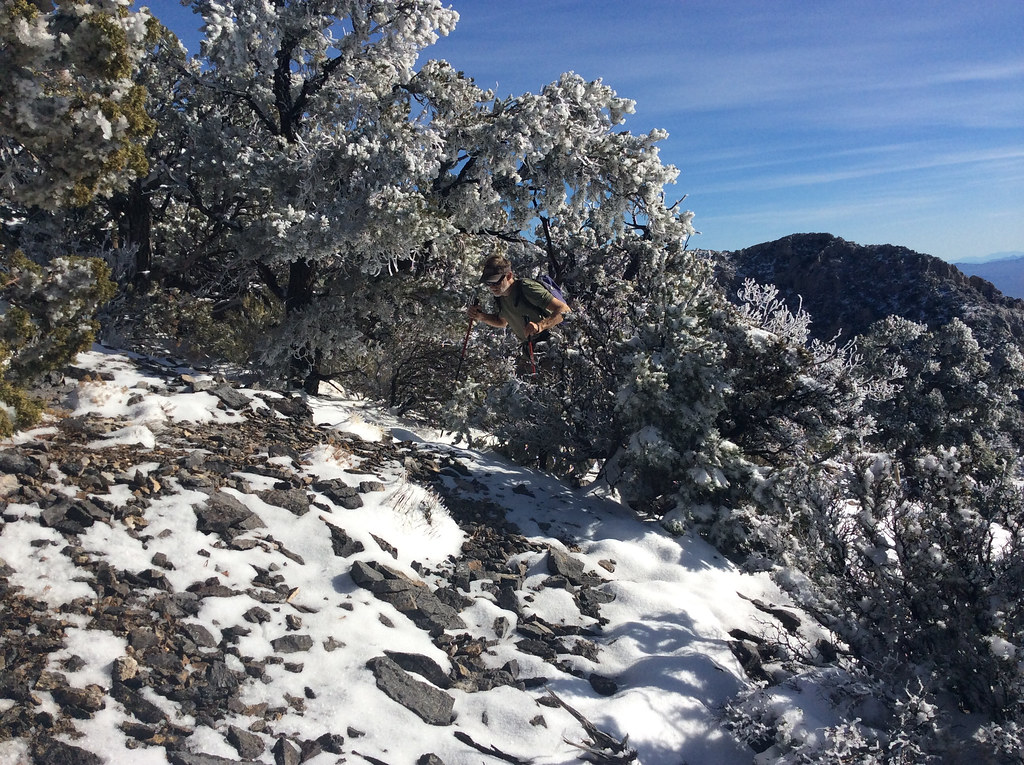 Starting up the lower slopes. 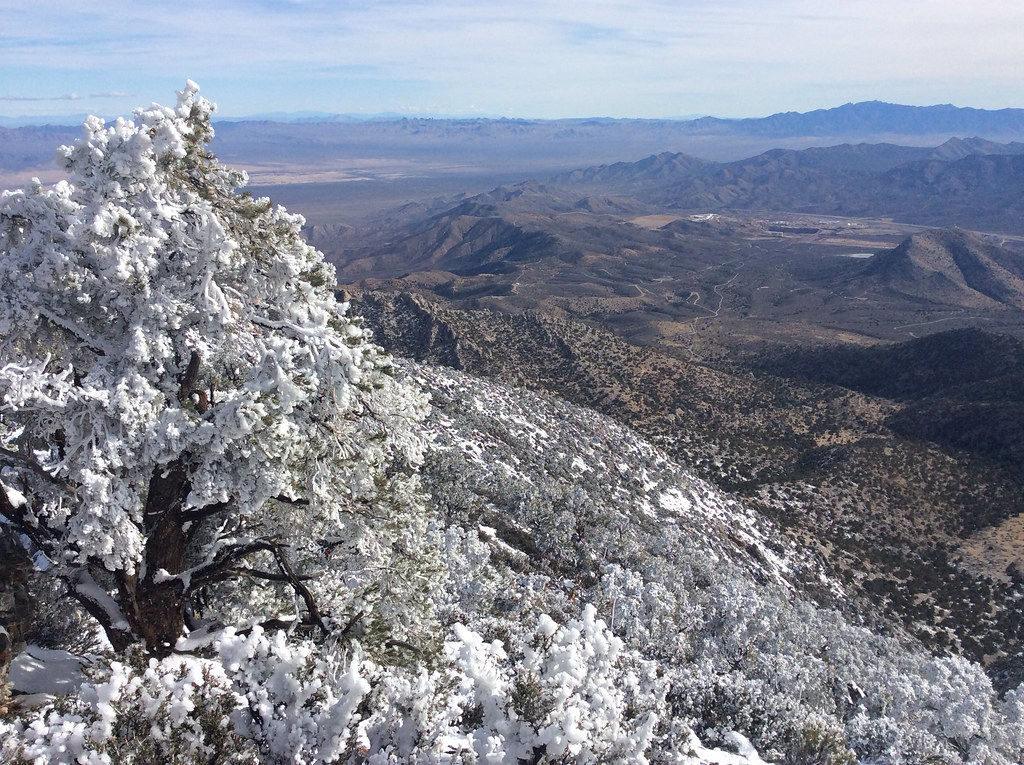 In the distance the mine at the exit off I-15, and the roads leading to the base. 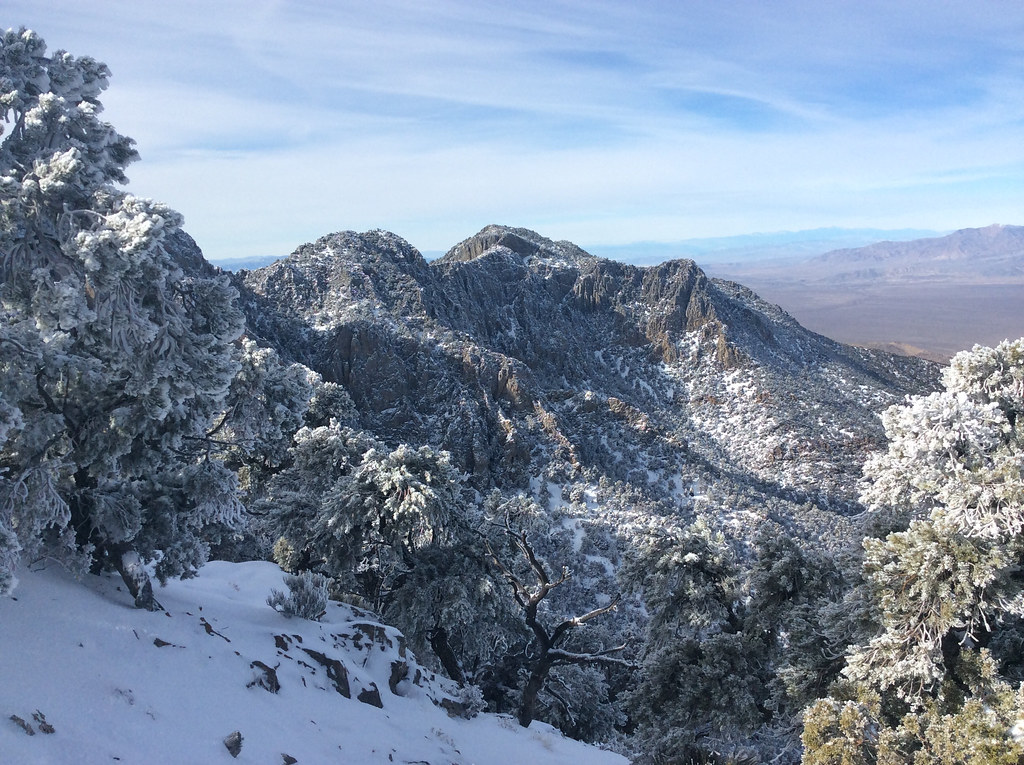 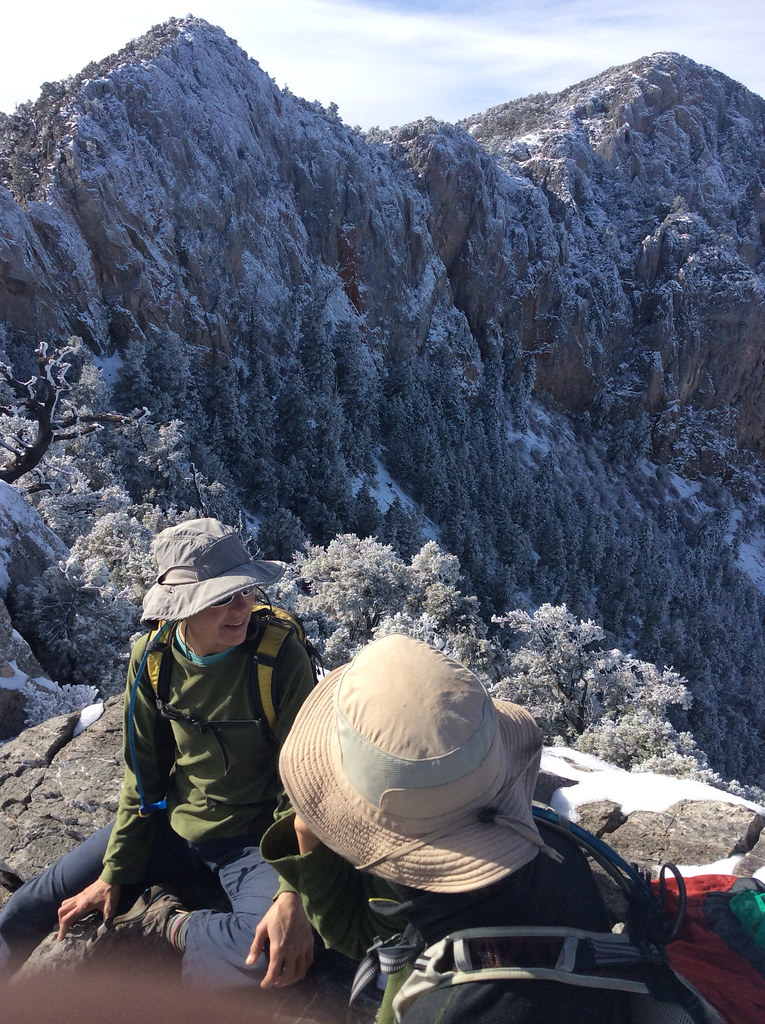 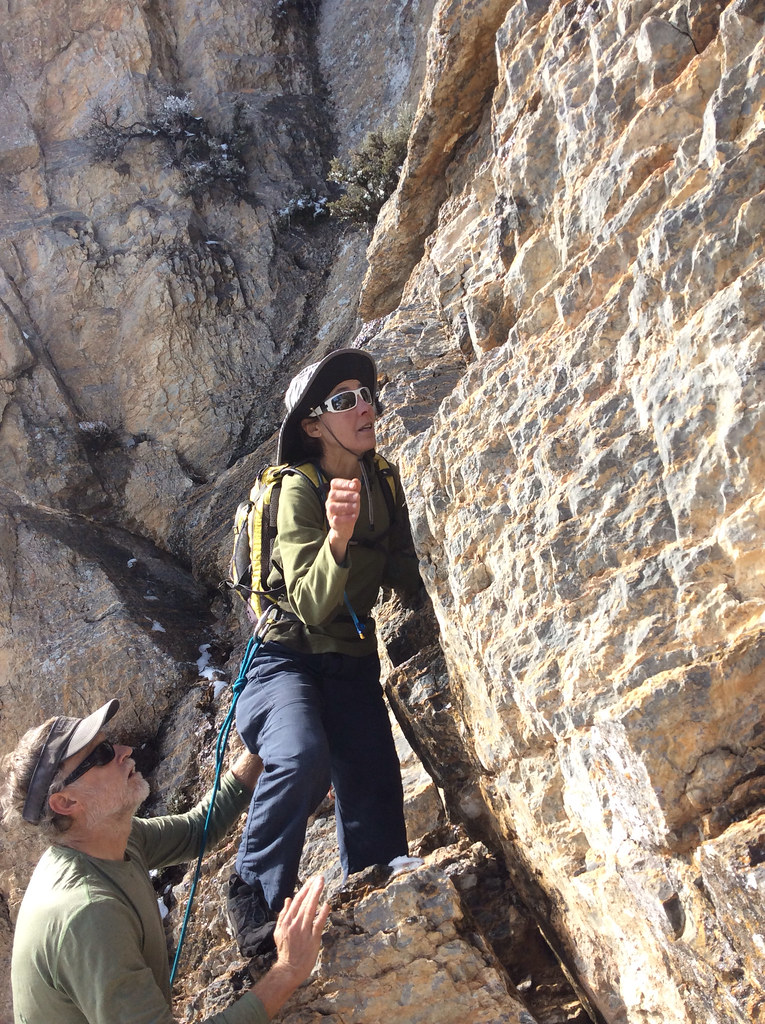 Sonja setting out on the crux passage... 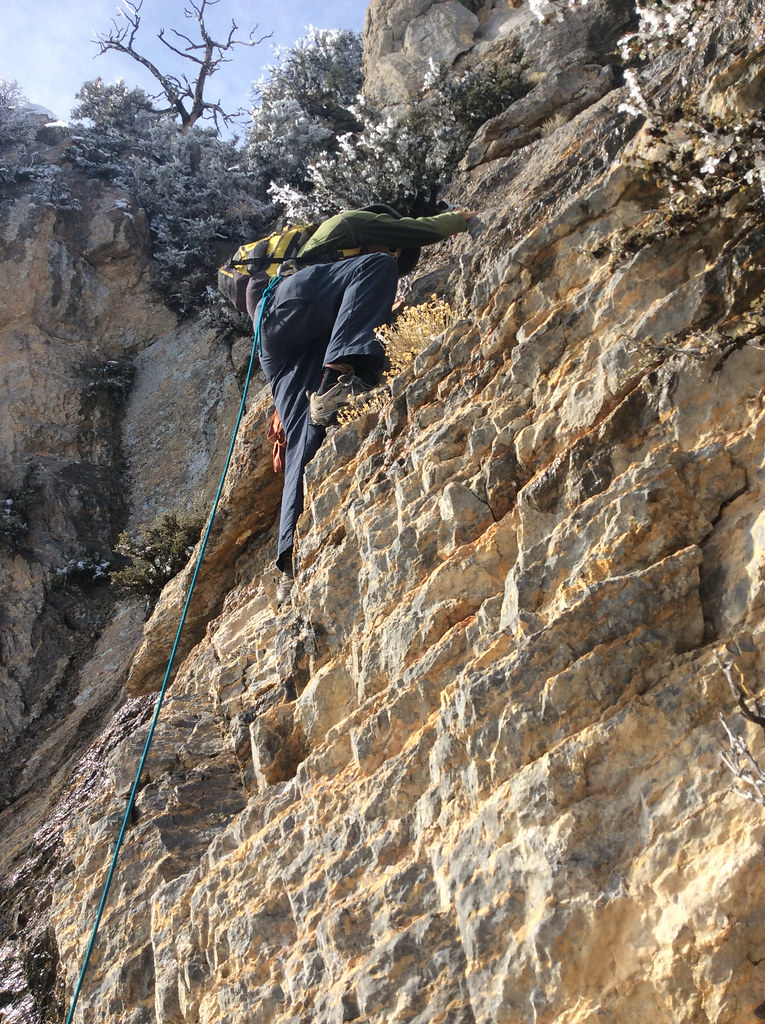 ...and again a little higher. 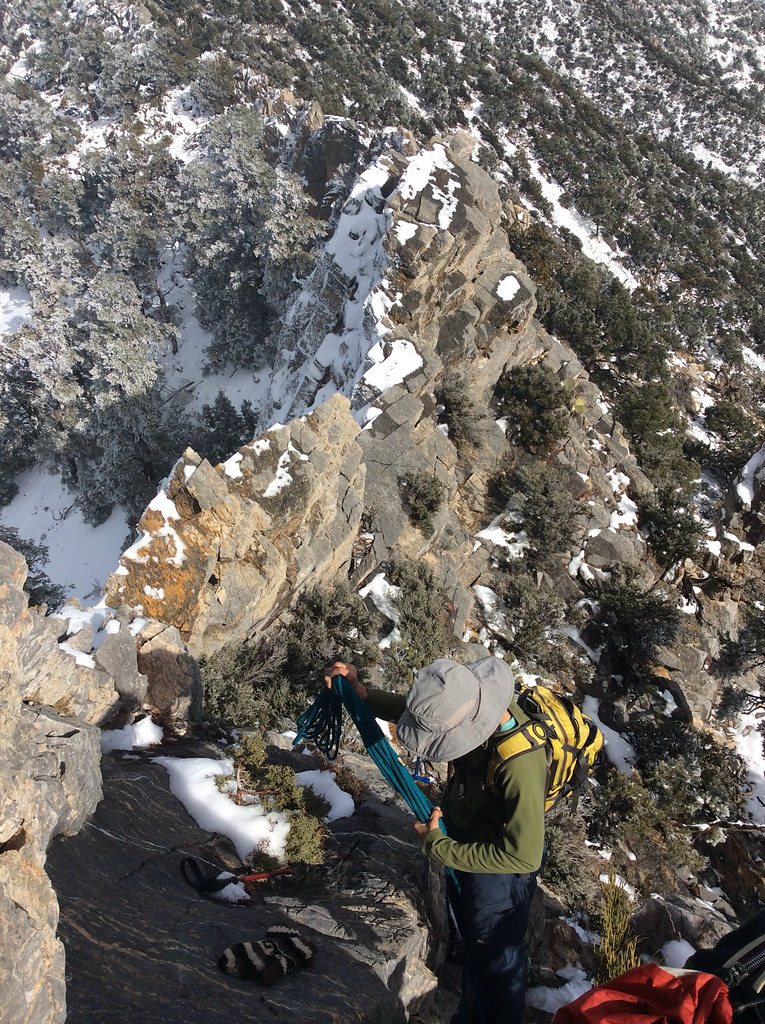 Negotiating towers and pinnacles later on. 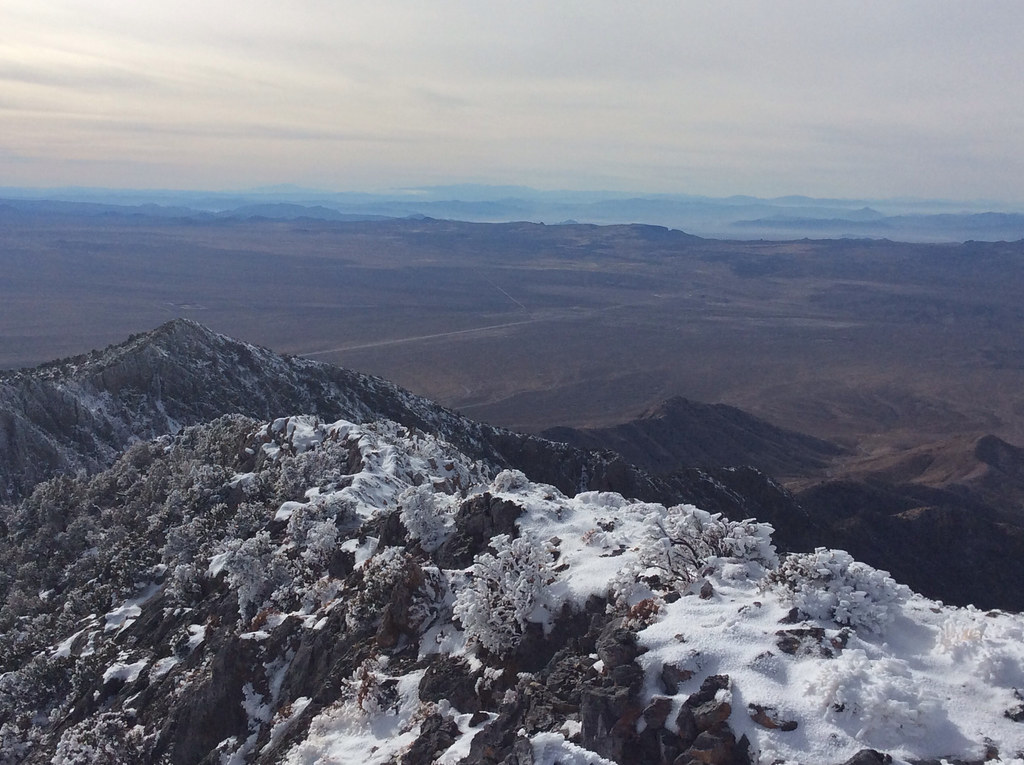 The straight line in the background is the interstate. 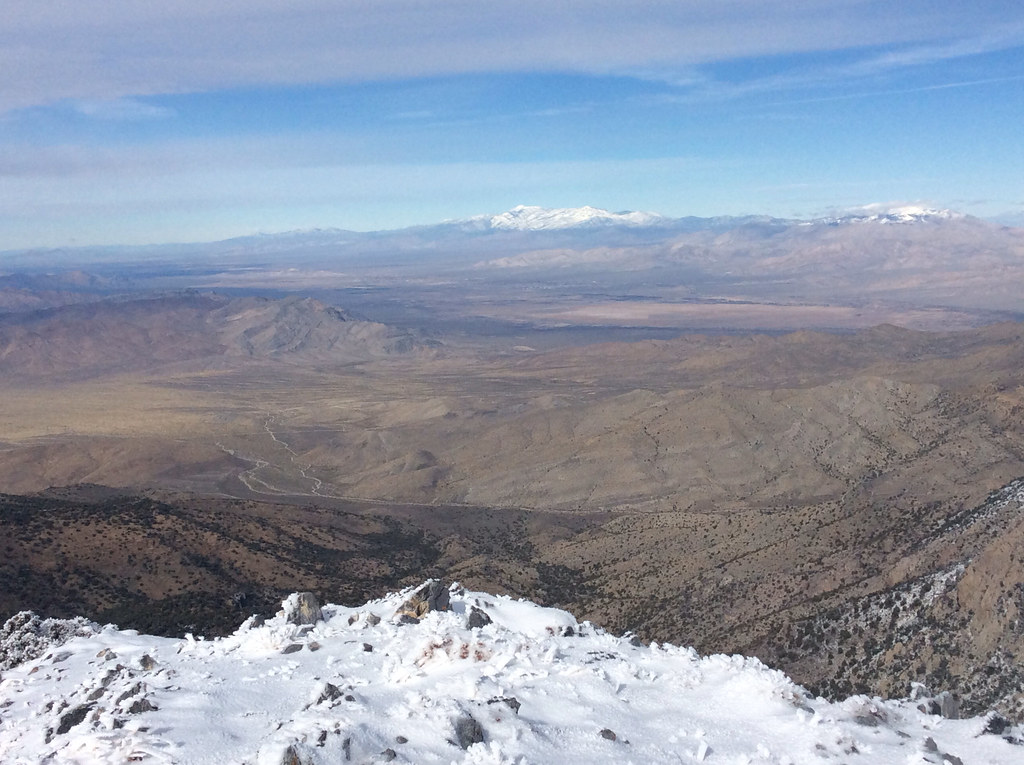 In the distance is Mt Charleston west of Las Vegas. 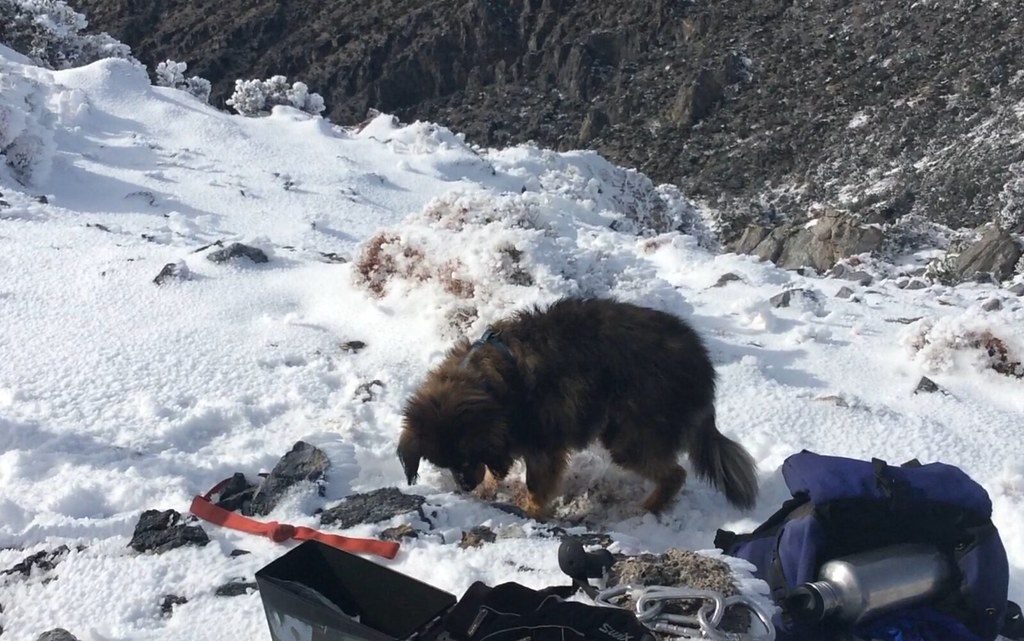 image by kullaberg631, on Flickr
Since Backcountry post is such a dog friendly community I can't really not include a pic of our dog on the summit!

This is awesome! Way to bring the pup even through all the technical parts. Love seeing the snow so high and cold above the desert floor.
IG: @backcountrypost

Mojave National Preserve is one of my favorite places in the winter. Quiet. Remote. Desolate. Now I have to add Clark Mountain.

I don't think the picnic area is named, but it's the one place to easily access the south side of the mountain. Take the Mountain Pass exit off of I-15.

Yes, the Mojave is a winter hiker's dream. Another good peak is Spirit Mountain, from Christmas Tree pass.

Kullaberg63 said:
I don't think the picnic area is named, but it's the one place to easily access the south side of the mountain. Take the Mountain Pass exit off of I-15.

Yes, the Mojave is a winter hiker's dream. Another good peak is Spirit Mountain, from Christmas Tree pass.
Click to expand...

Thanks! Summiting the Kelsoe Dunes is also a great adventure.
Art
You must log in or register to reply here.
Similar threads