With the sometimes wildly up and down weather that we have had in Alberta so far this winter- it has been a slower than usual start to our ski season. After an initial burst of good xc ski conditions in the foothills nearby to Calgary- very warm and windy weather stripped much of that away, and I had spent most of the last two weeks mountain biking on trails that featured more dry dirt, than snow or ice. A week ago, an intense storm dumped 60 cm's in the mountains further west along the divide, but...it fell over a very weak base and was accompanied by strong winds, a recipe for high avalanche hazard.
With that in mind- Chester Lake was a logical choice for a safe backcountry tour. As the storm retreated and skies began to clear, we made our way up the old logging road that leads towards the trail into the lake: 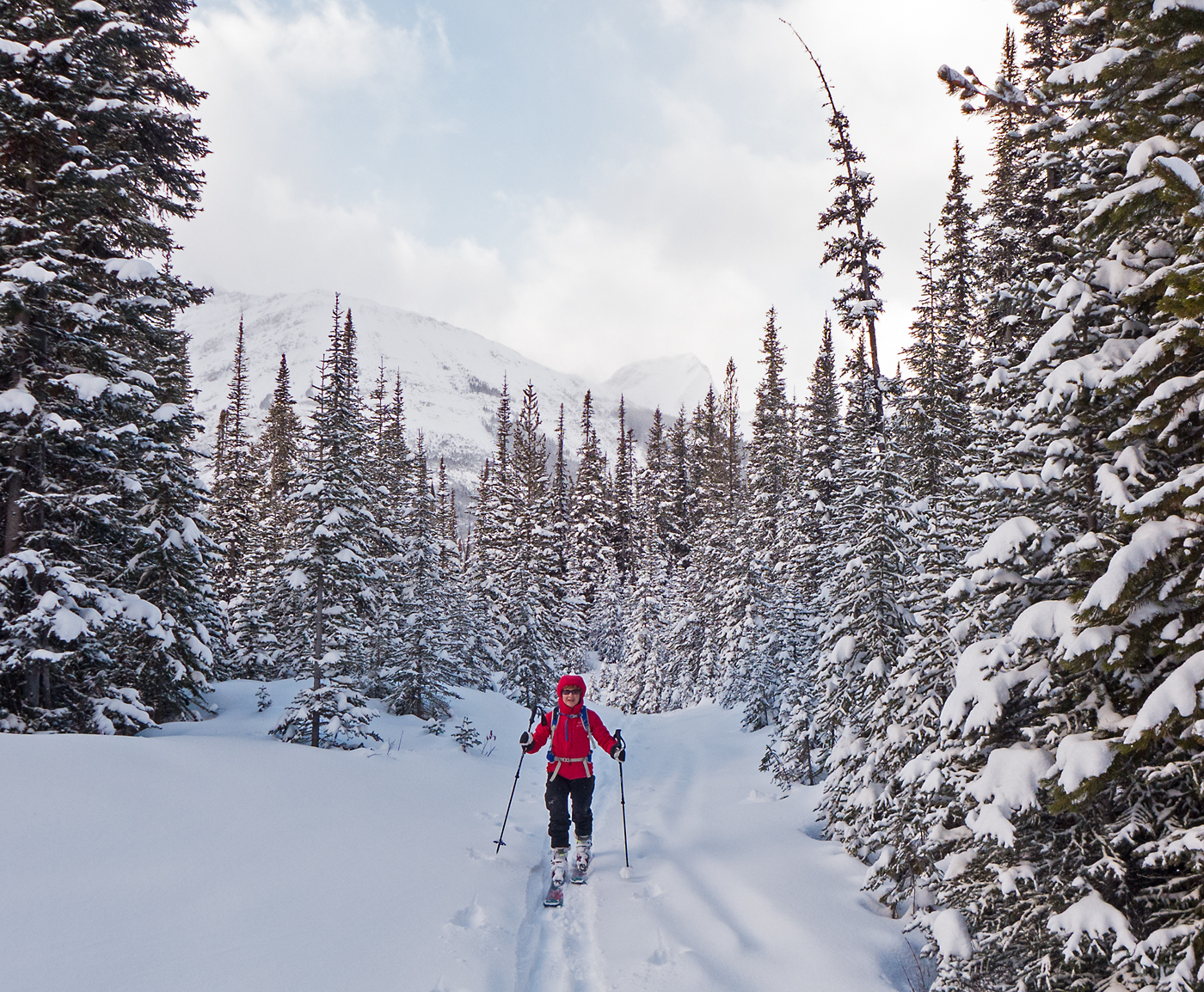 After a couple km of climbing the logging road, and a winding uphill on the hiking trail- the route breaks out into a series of meadows, with views of Mount Chester, which is a popular summer scramble: 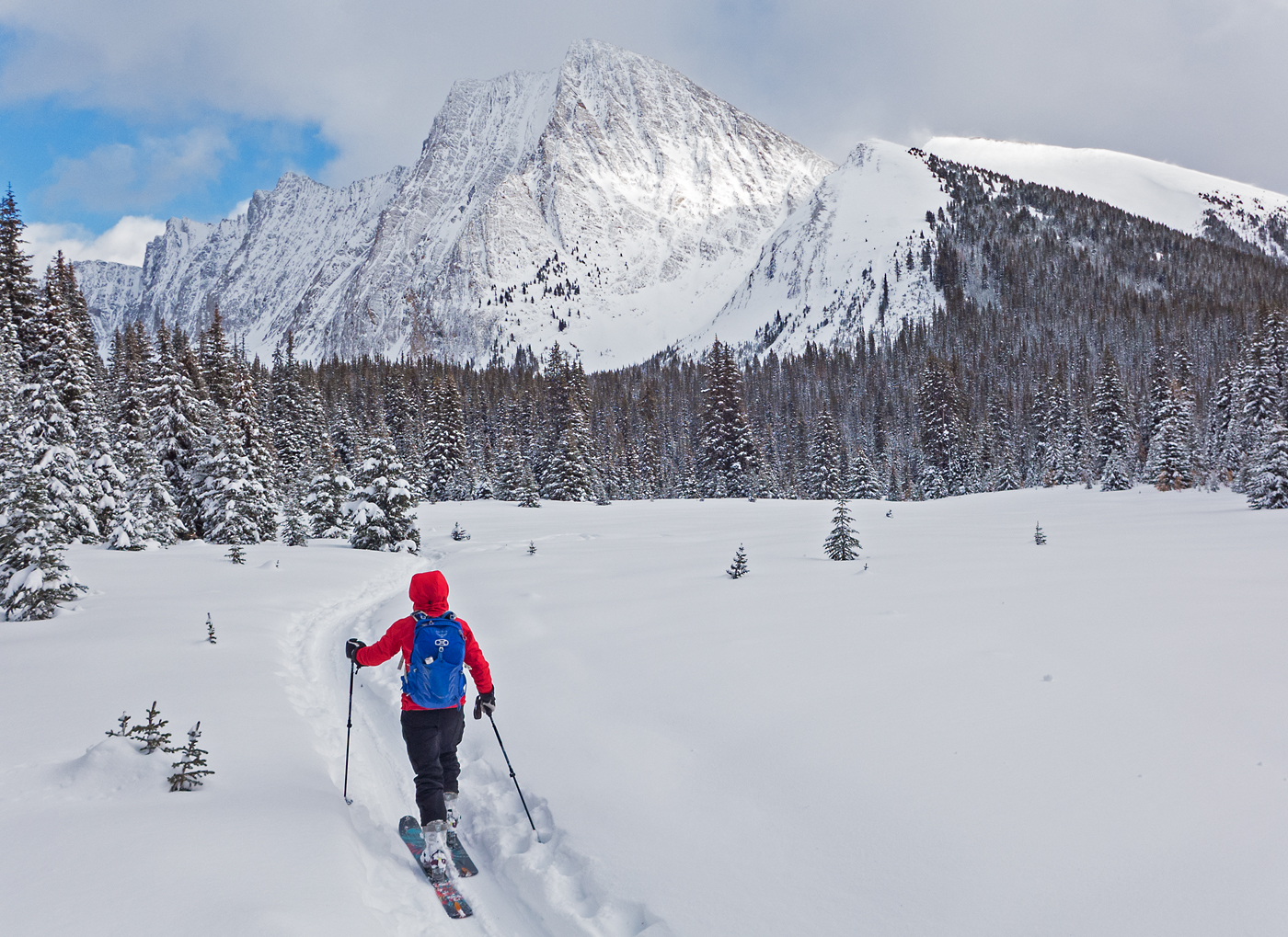 A final uphill through the forest ends at the big meadow just before the lake, which is in the bowl at lower centre. 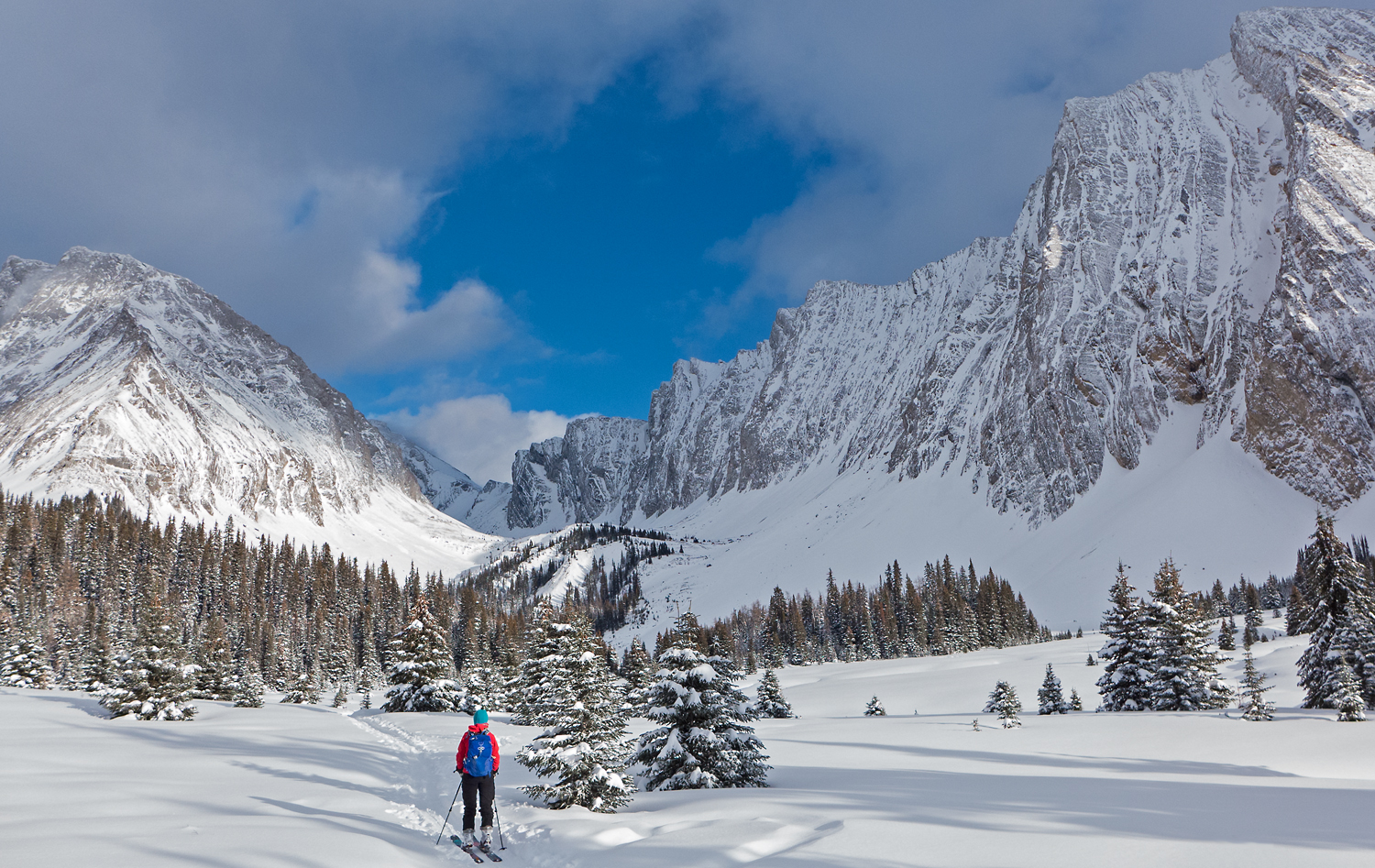 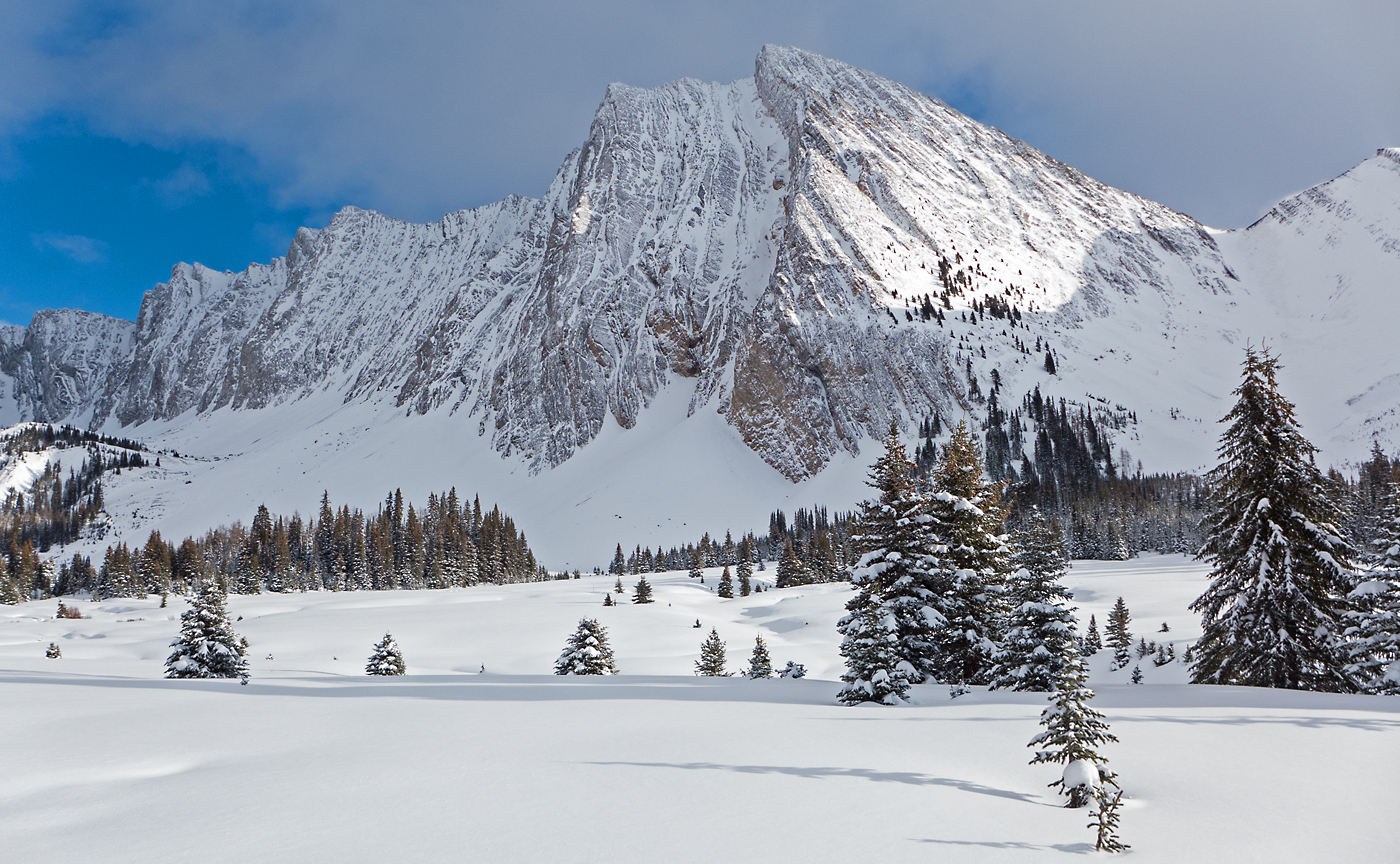 Along the stream that drains the lake, I played around with some in-camera B and W's. Editing them later- I used the WB in ACR to give it a slightly warm tone: 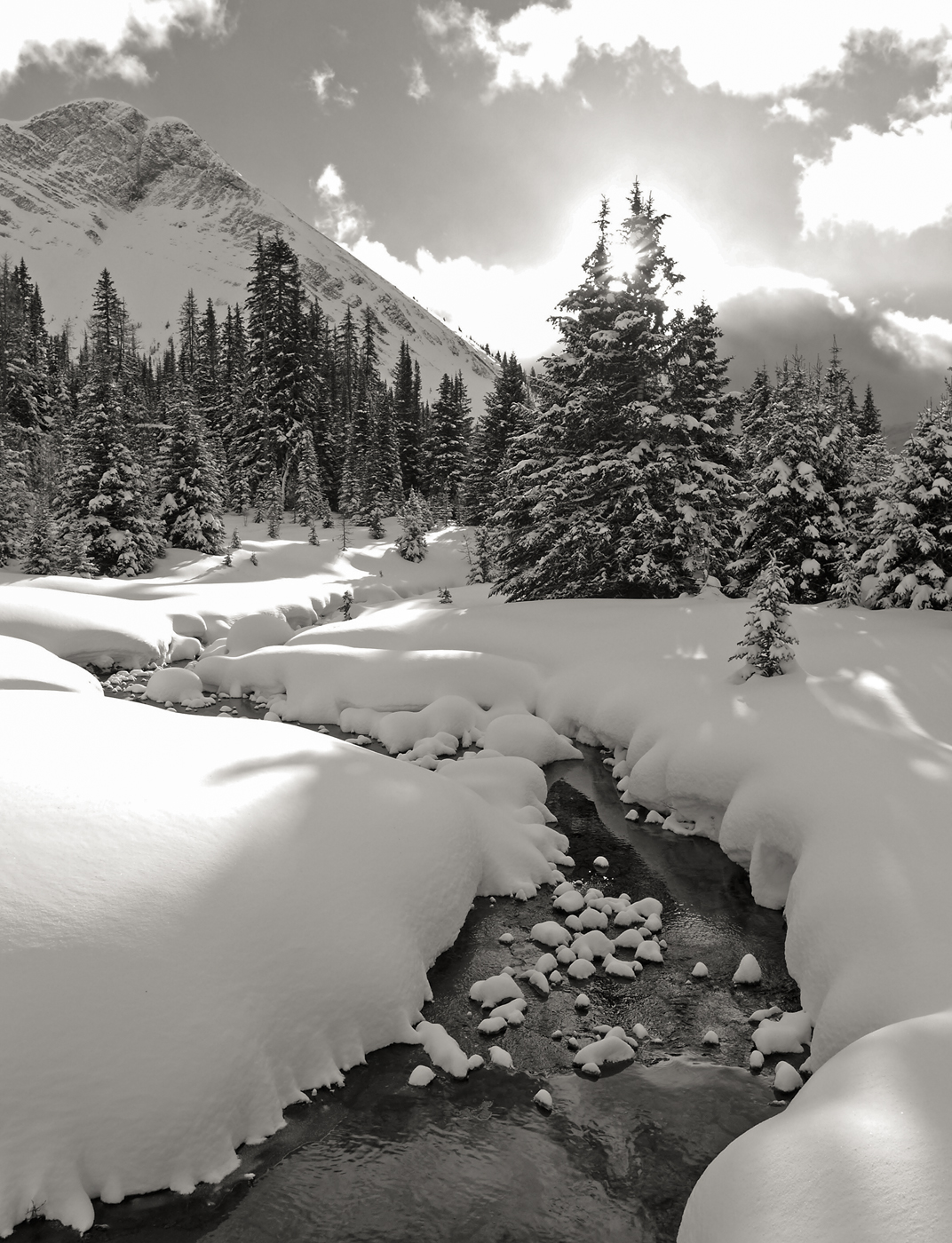 Rather than eat lunch in the deeply shaded bowl surrounding the lake, we climbed 100m higher to the Elephant Rocks- an interesting group of glacial erratics: 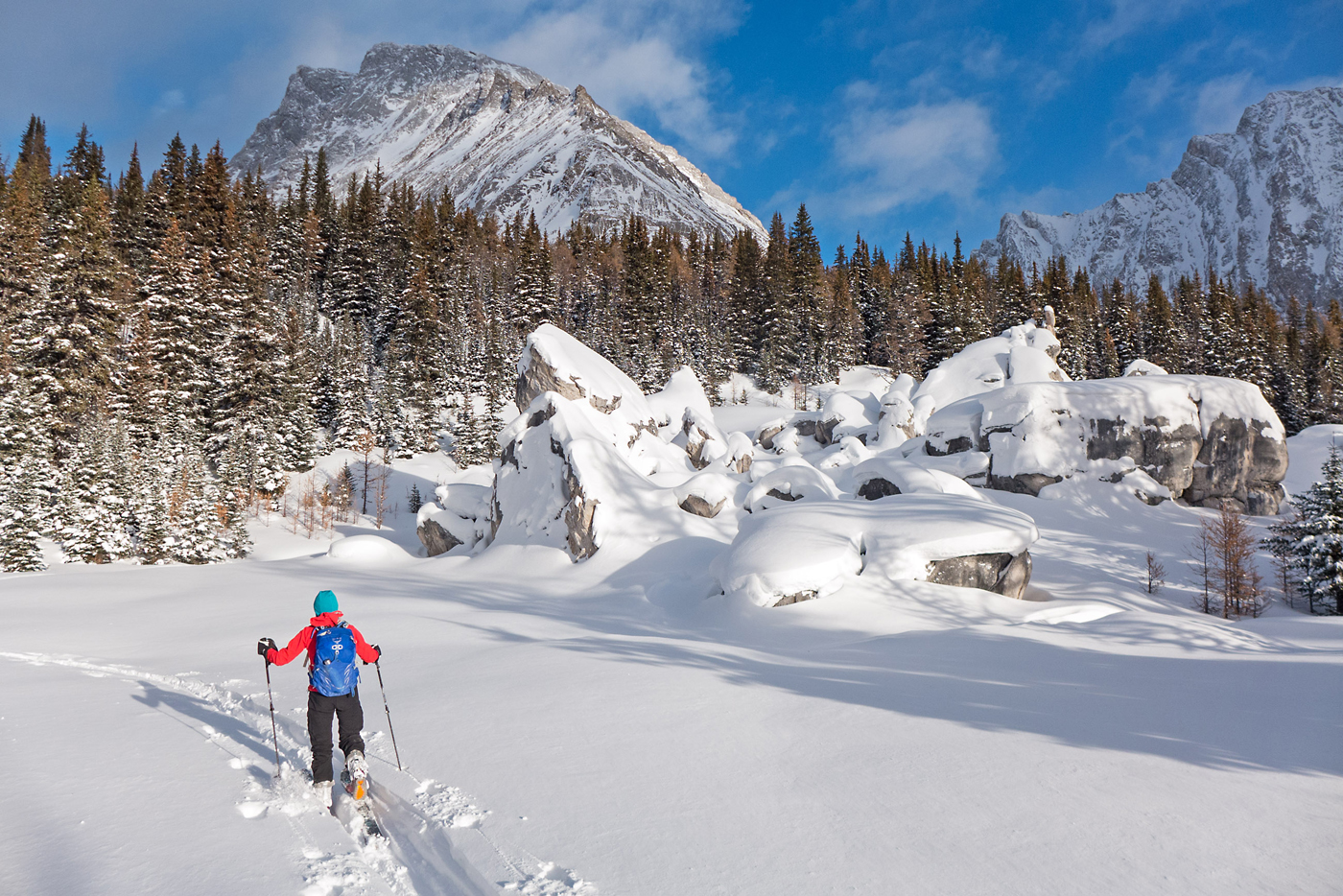 While there are some slopes worthy of turns in the vicinity- today was not the day due to the elevated hazard, and the generally bottomless character of the weak snowpack. Stripping skins after a late lunch in the sun- we enjoyed a quick fun descent of the trail and logging road.
Fast forwarding to Christmas Eve- we met up with a couple of friends to ski the Tyrwhitt loop, a great 18 km xc ski route in Peter Lougheed Provincial Park: 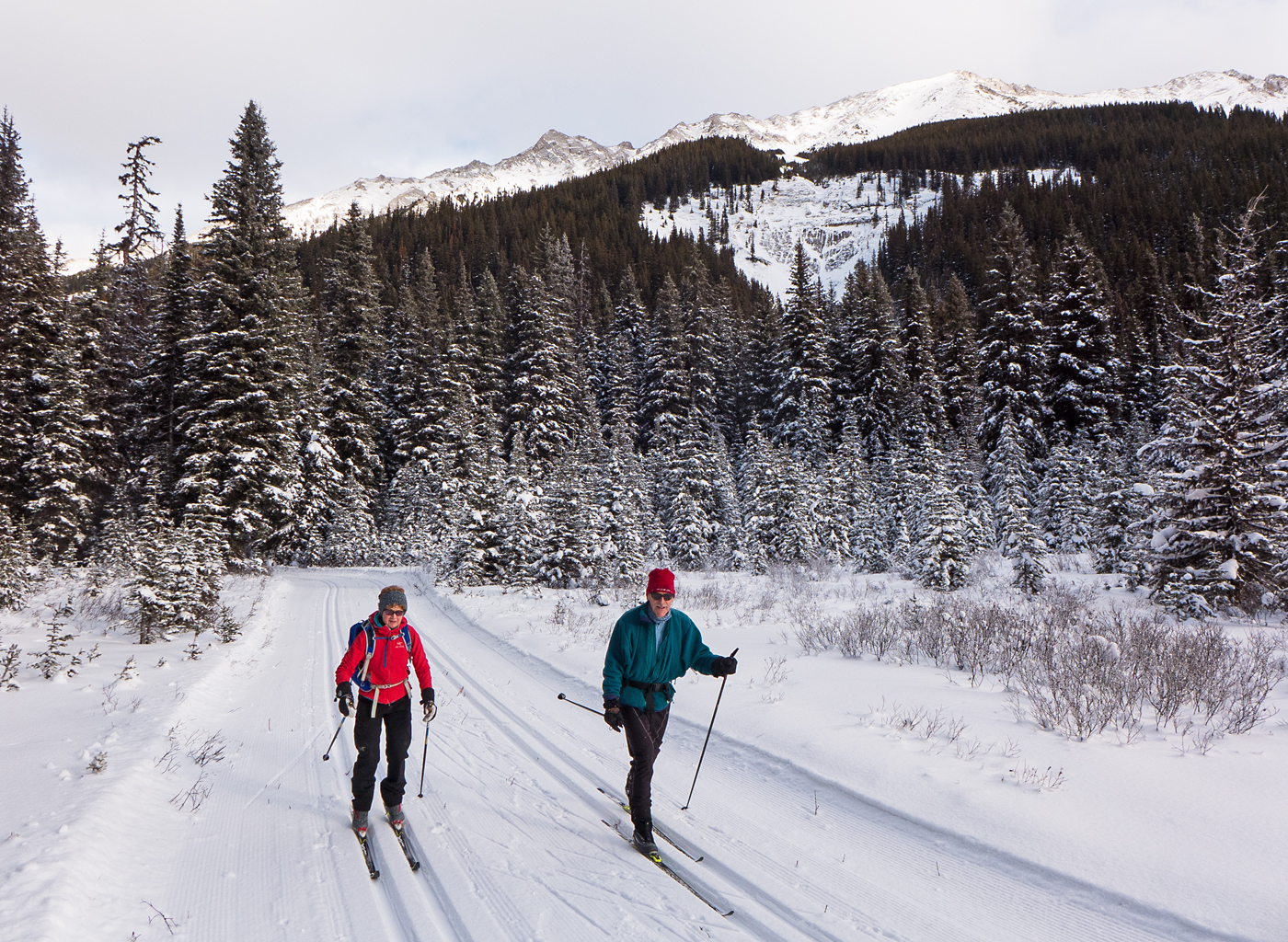 The loop takes in a variety of groomed trails and climbs 300 vertical meters to extensive meadows below the Elk Range. Despite the recent dump- the willows were still poking through sections of trail, but ski conditions were great: 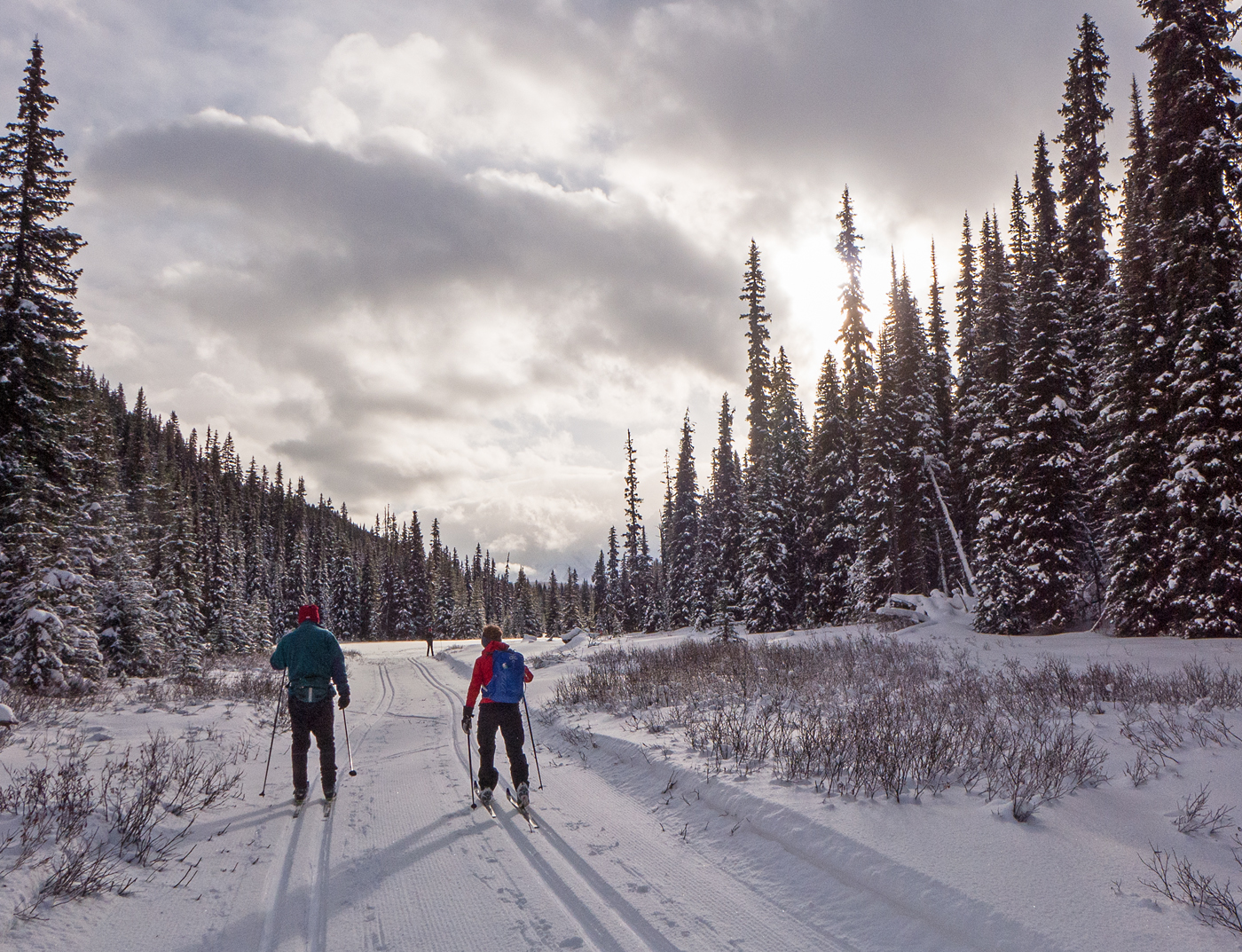 Following a snack break at the far end of the loop at Elk Pass on the Alberta-British Columbia border, we began to close the loop along a series of long easy downhill stretches: 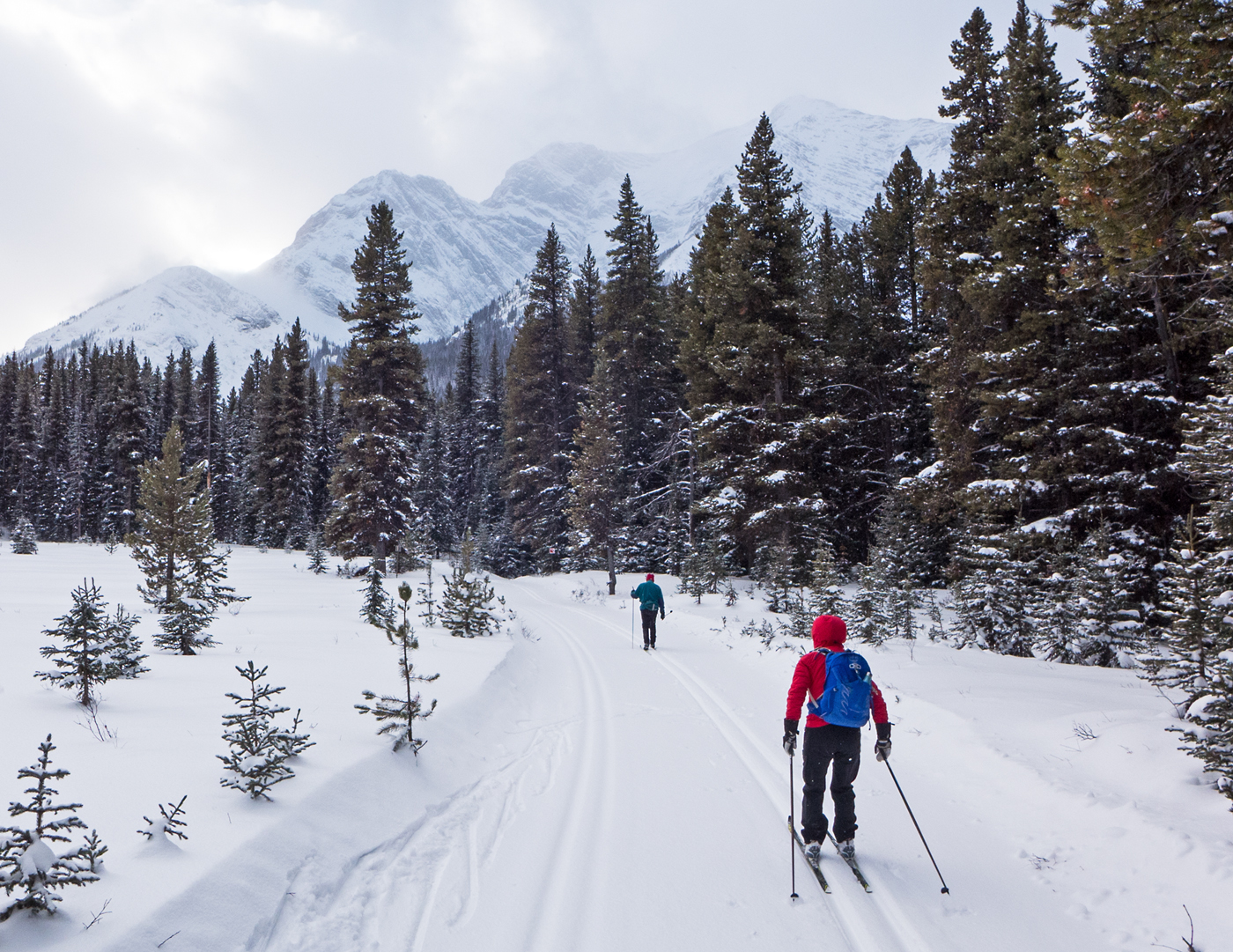 The final few km were along the winding, narrow, mostly downhill trail that follows Fox Creek- always fun, especially with the good snow conditions that we enjoyed!: 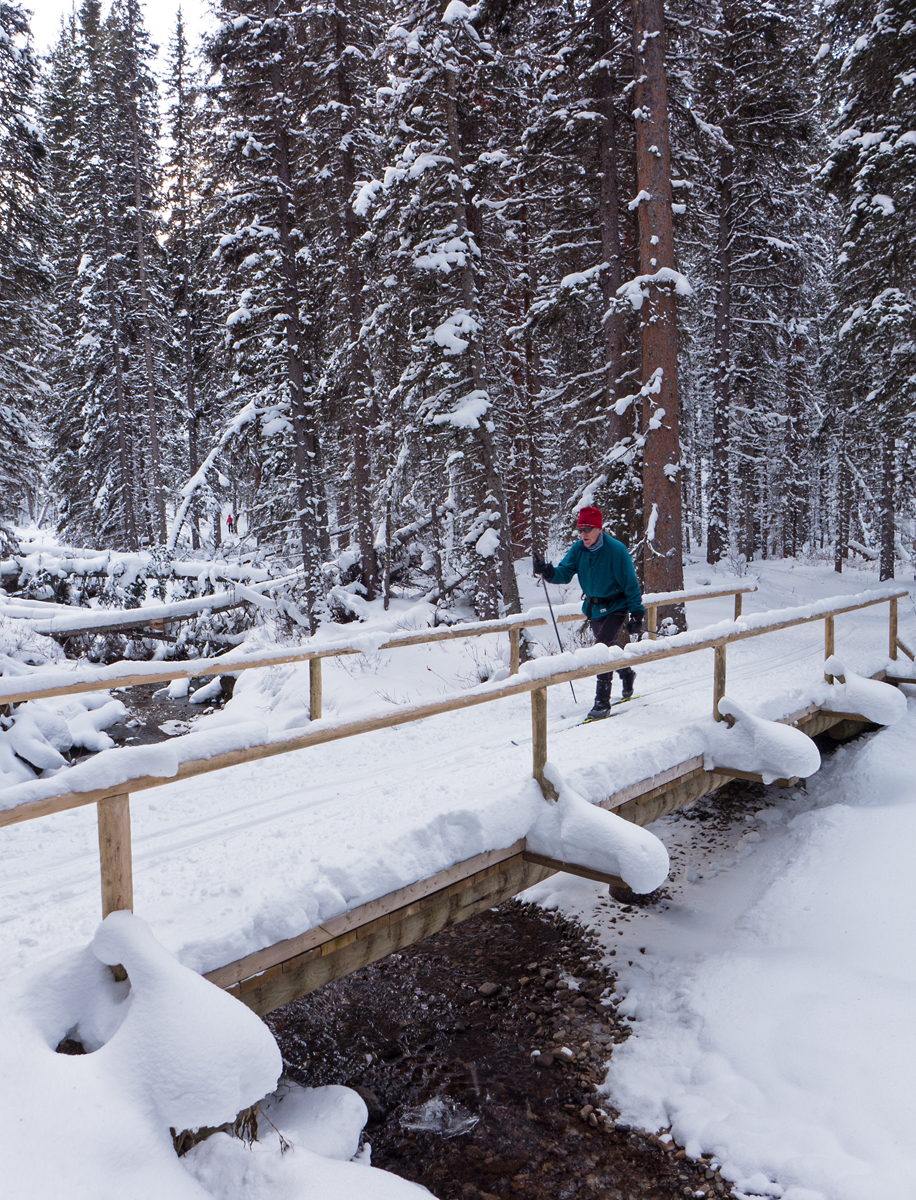 With Christmas Day done with- our tradition for the last 20 years has been to get together with the same core group of friends, and burn off the Christmas dinner excesses on a Boxing Day (AKA December 26th to Americans) ski tour. As the best conditions within an hour and a half's drive were at Peter Lougheed Park- we headed back to ski another selection of the 80 km of groomed xc ski trails there. It was a cold start to the morning at -18 but we warmed up quickly with a steady climb, which was followed by losing much of the elevation gained, on a steep fast descent: 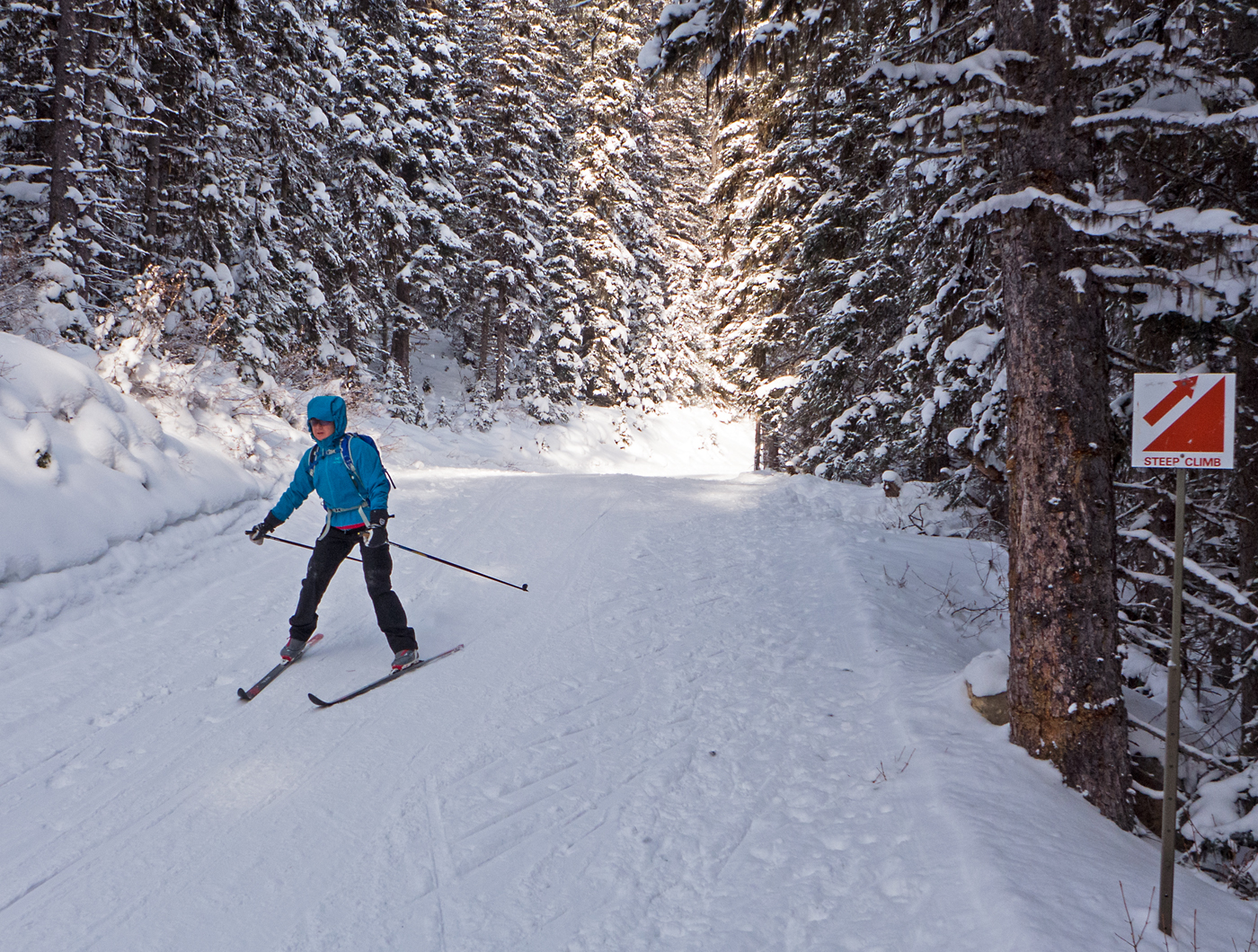 A few lingering flurries, as we began the long gradual climb up the Elk Pass trail: 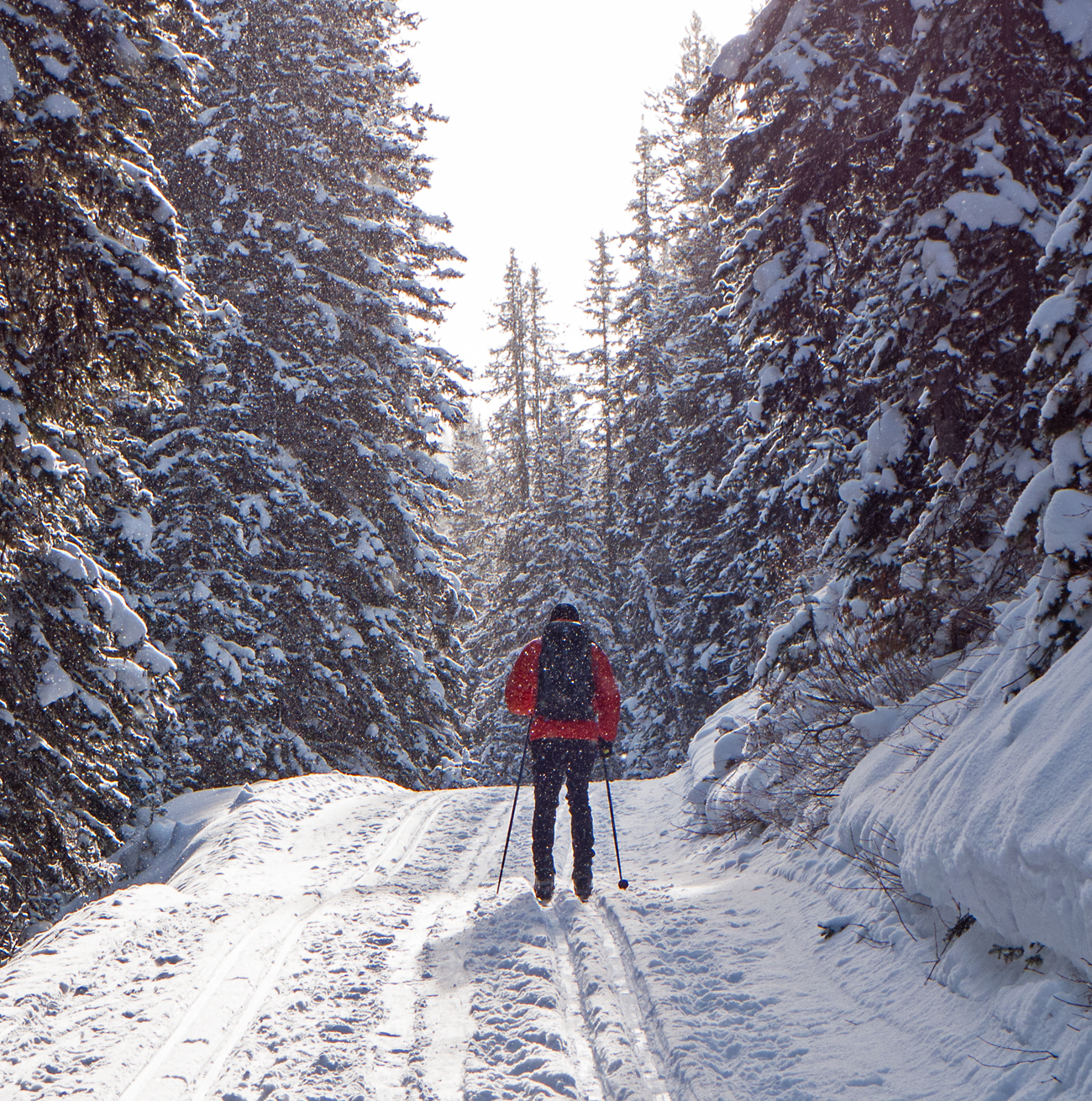 With half of the elevation gained towards our destination of Blueberry Hill, the Elk Pass trail breaks out into creekside meadows: 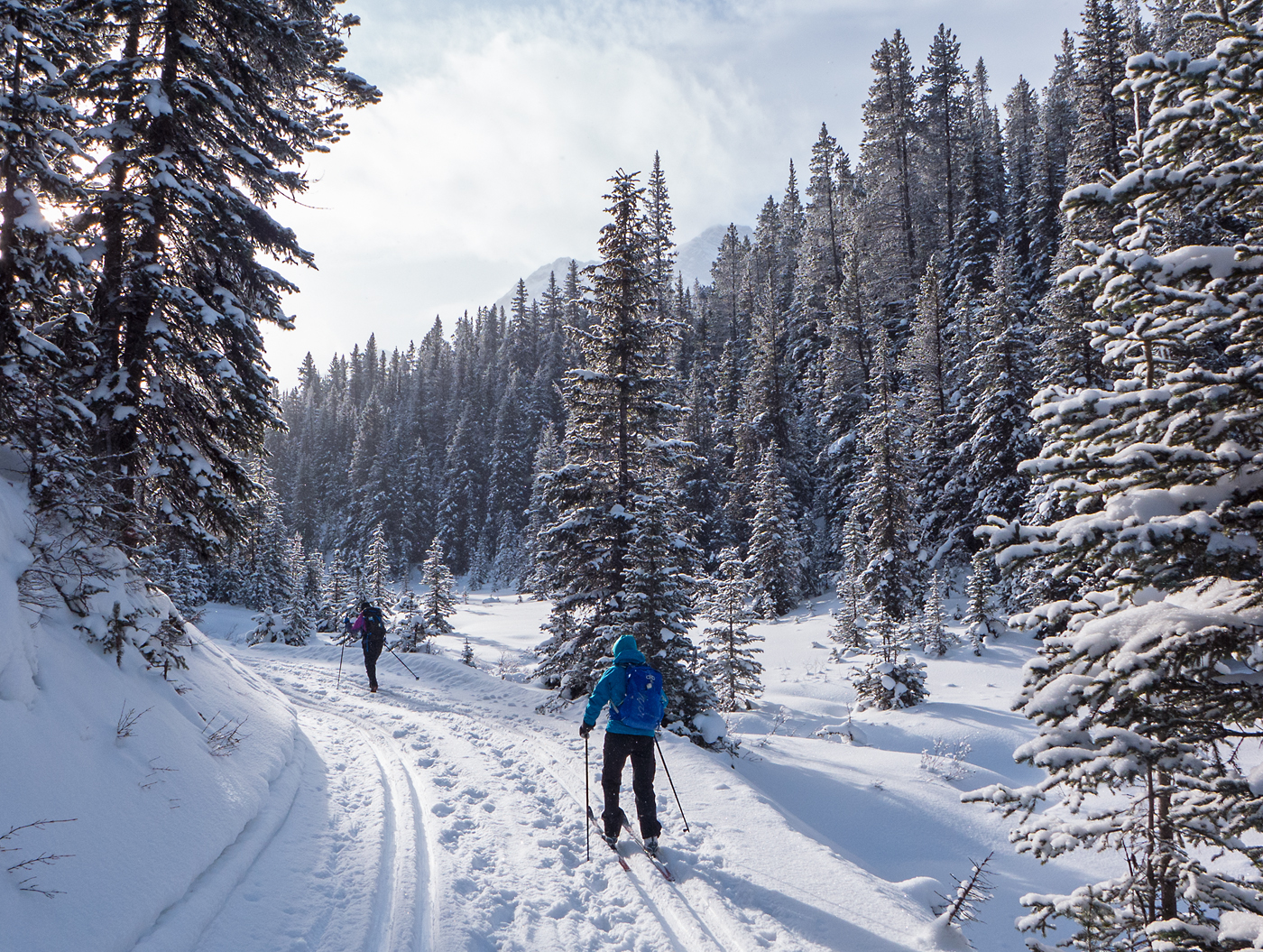 The group enjoying the sunshine that was most welcome, on a cool day: 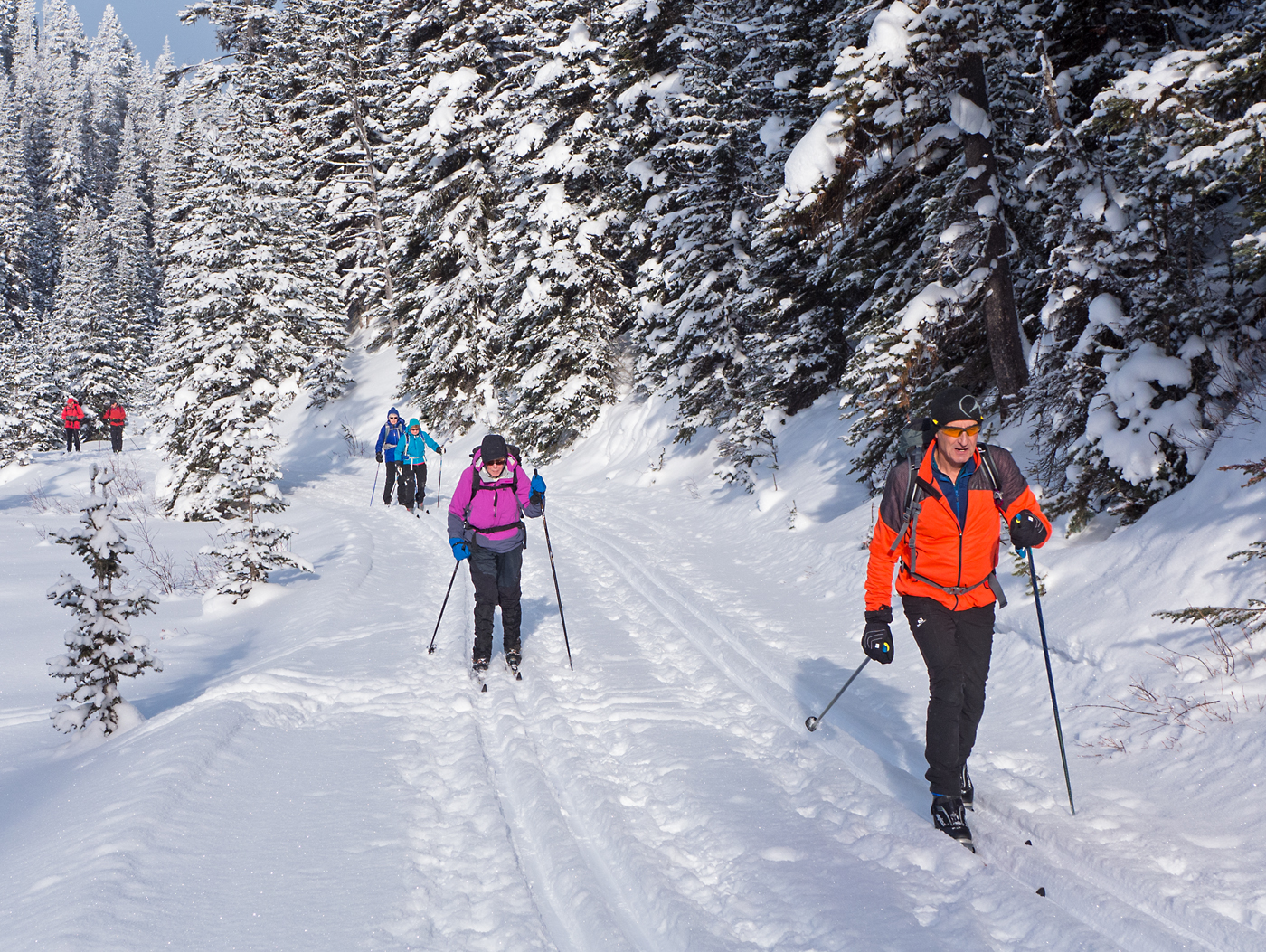 Leaving the Elk Pass trail behind- we took the 3.5 km side trail that gains 200 vertical m to Blueberry Hill. With 5 cm of new snow here overnight- a winter wonderland!: 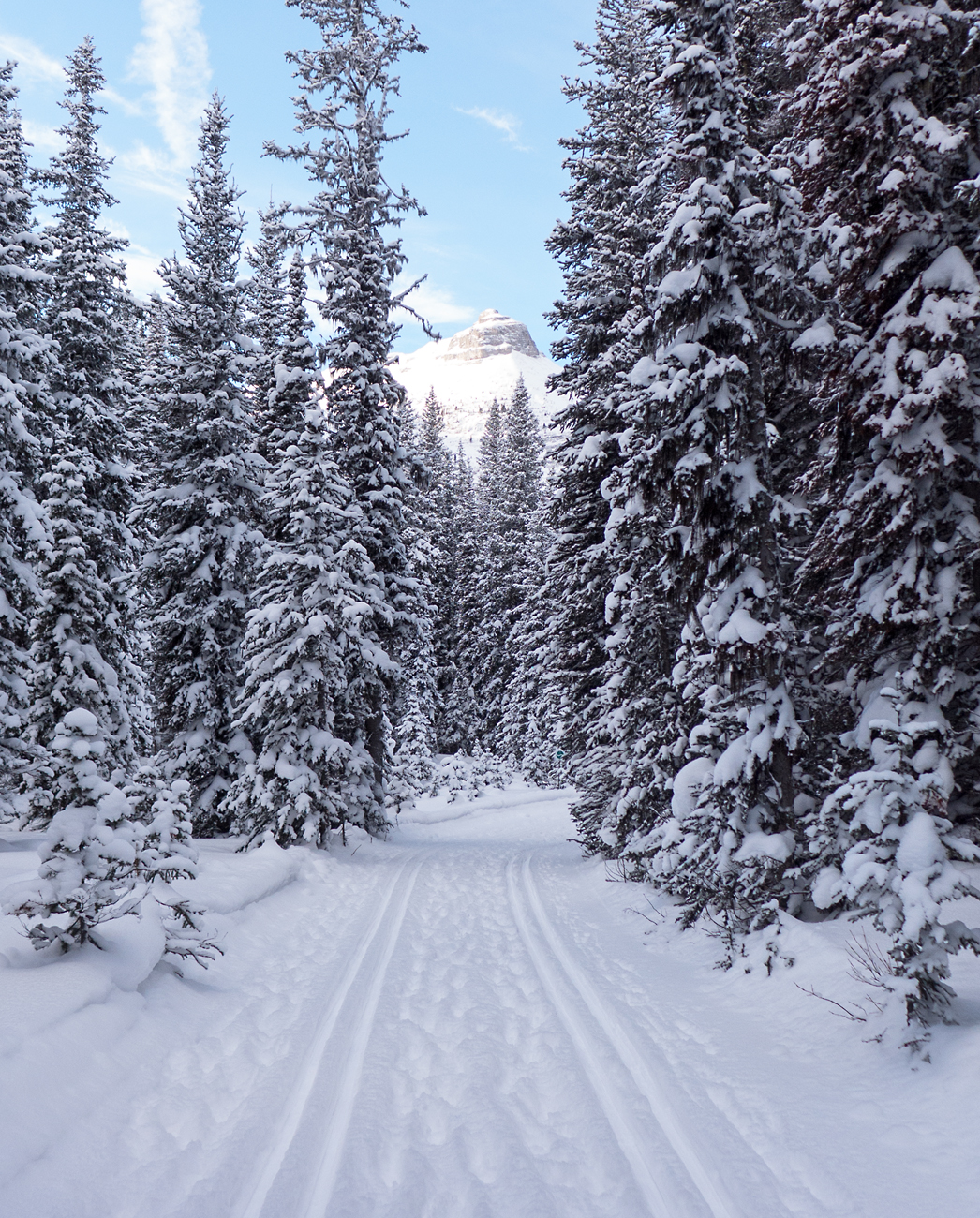 The top of Blueberry features an extensive view of Upper and Lower Kananaskis Lakes- which is becoming more obscured over the years as the trees mature: 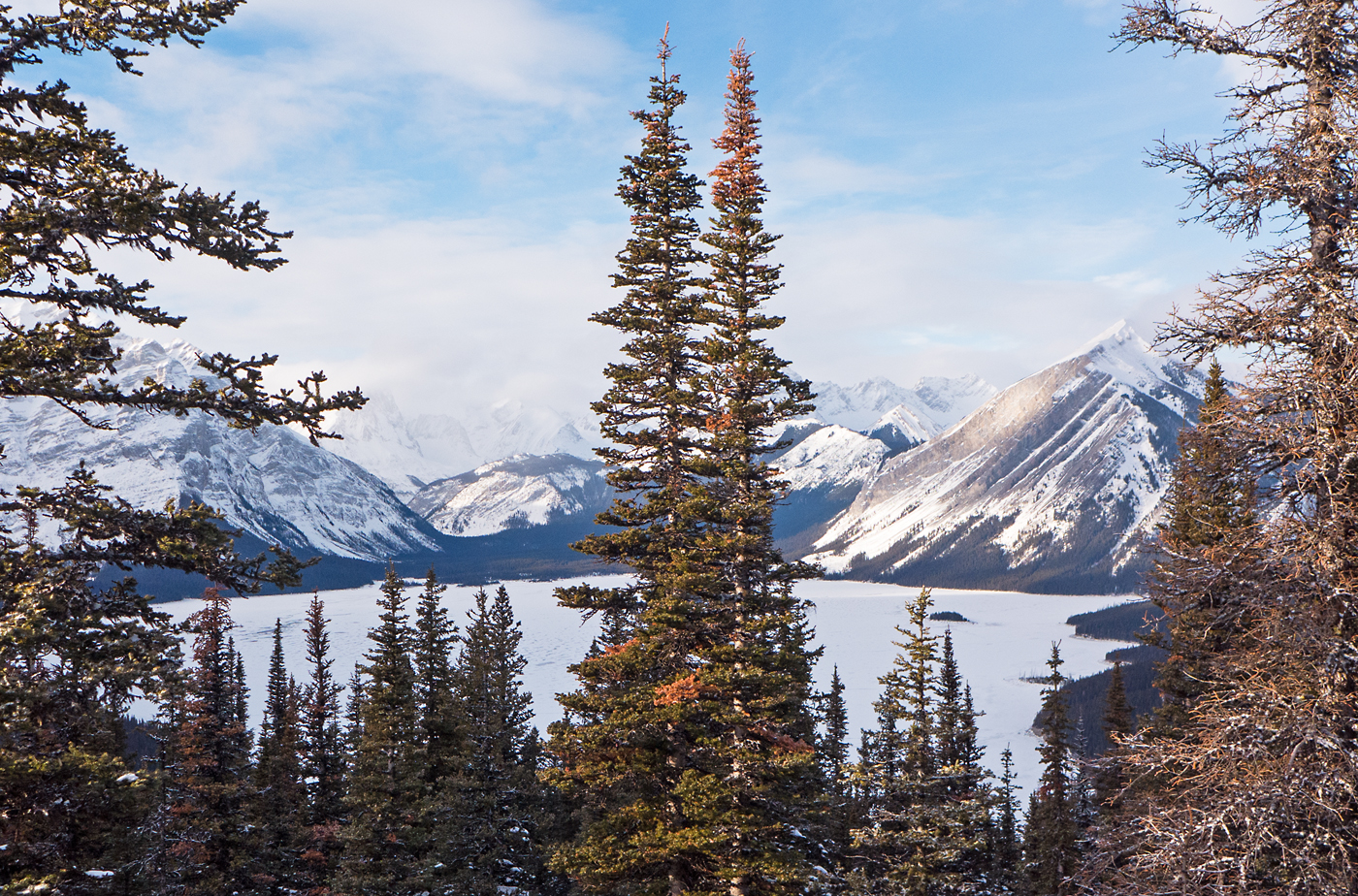 We hit the top not long before the sun disappeared for the day behind the high peaks to the west. Somewhat uncharacteristically in what can be an exposed spot- calm winds allowed for a tea break, before bundling up for the long, at times fast, but always fun descent: 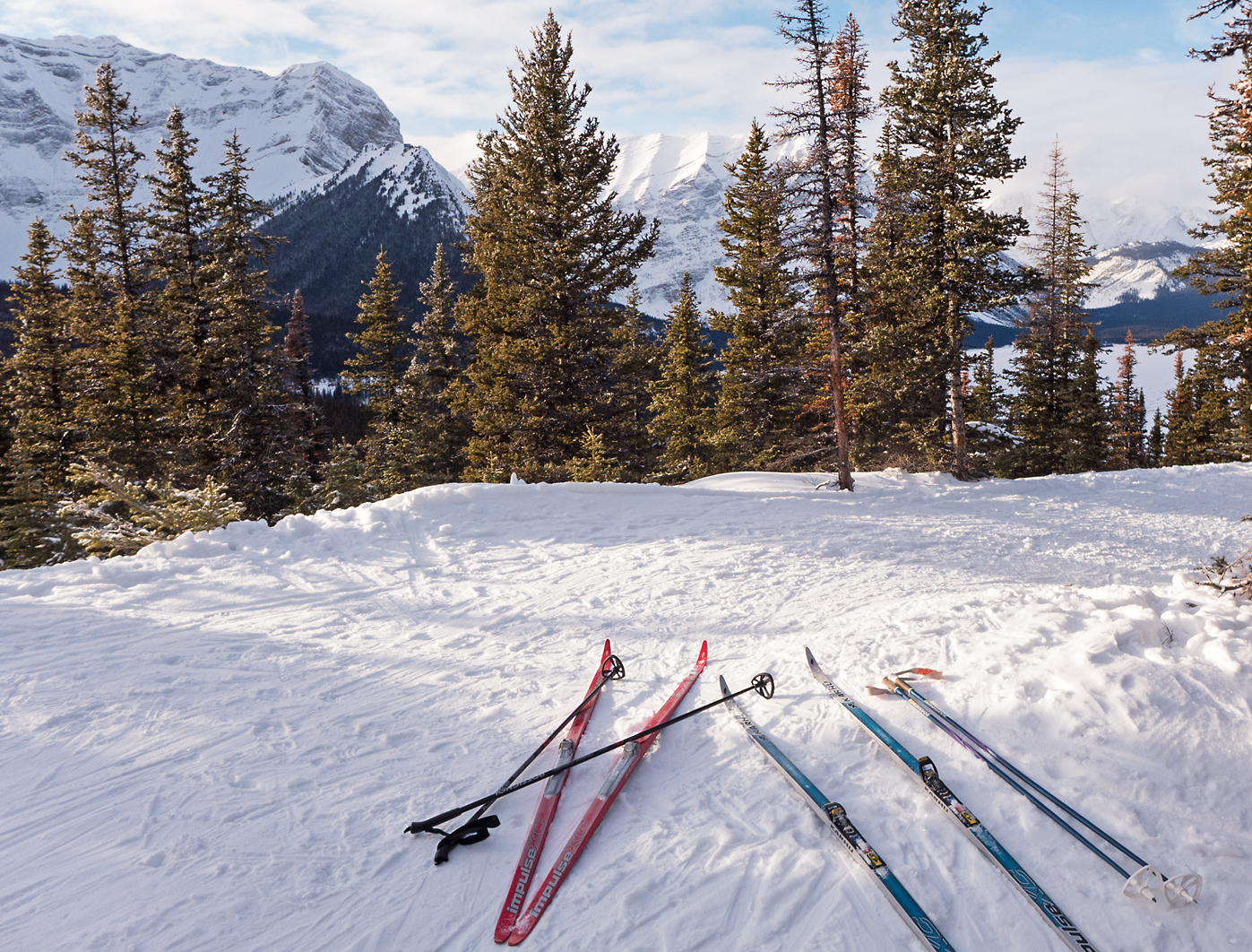 After the long run back down 7 km- we opted to take the extra side loop along Fox Creek back to the trailhead as it had been so delightful on Christmas Eve. The skiing did not disappoint, and the light was nicer here today: 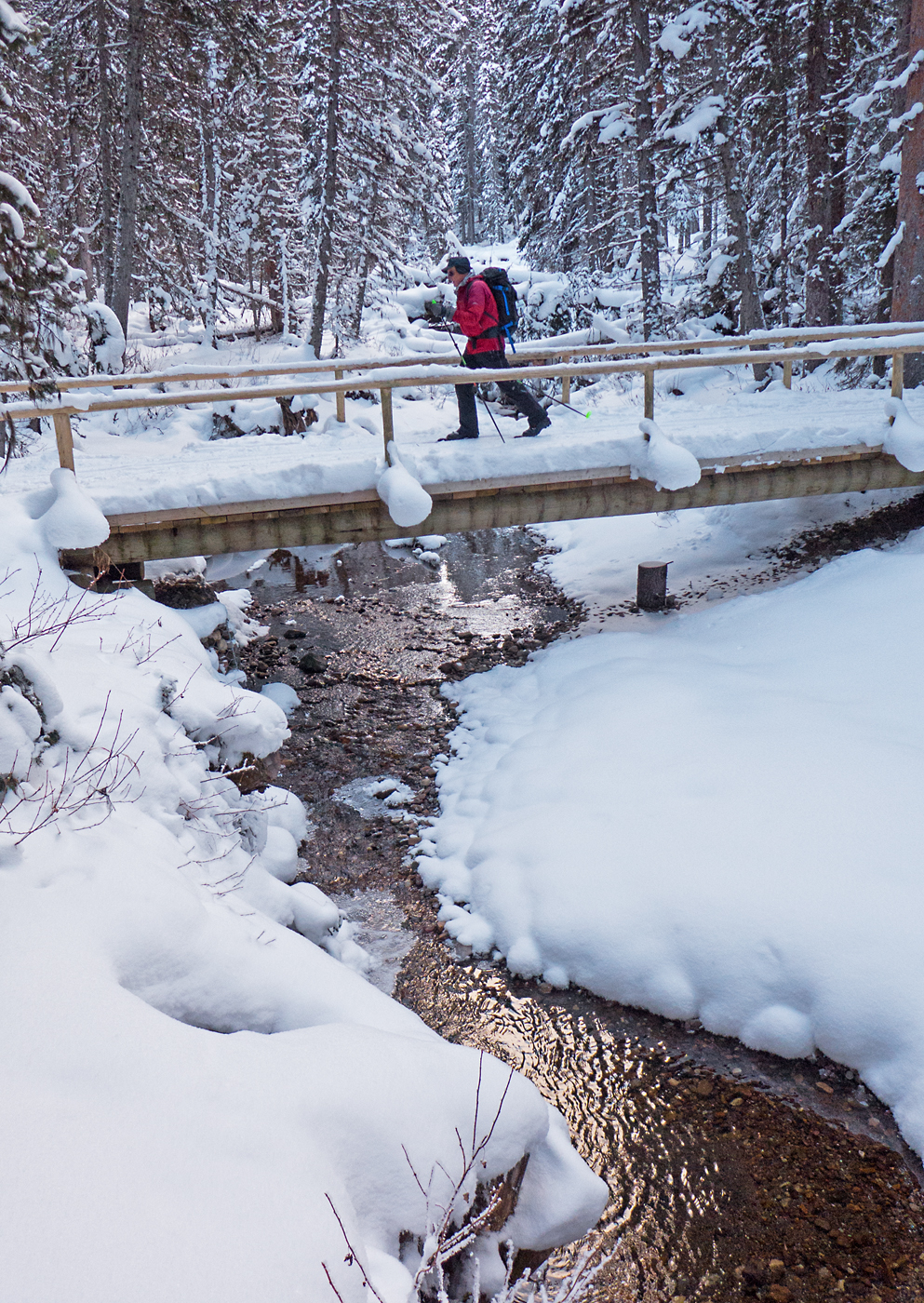 Merry Christmas and a Happy New Year, from Jo and Steve!: 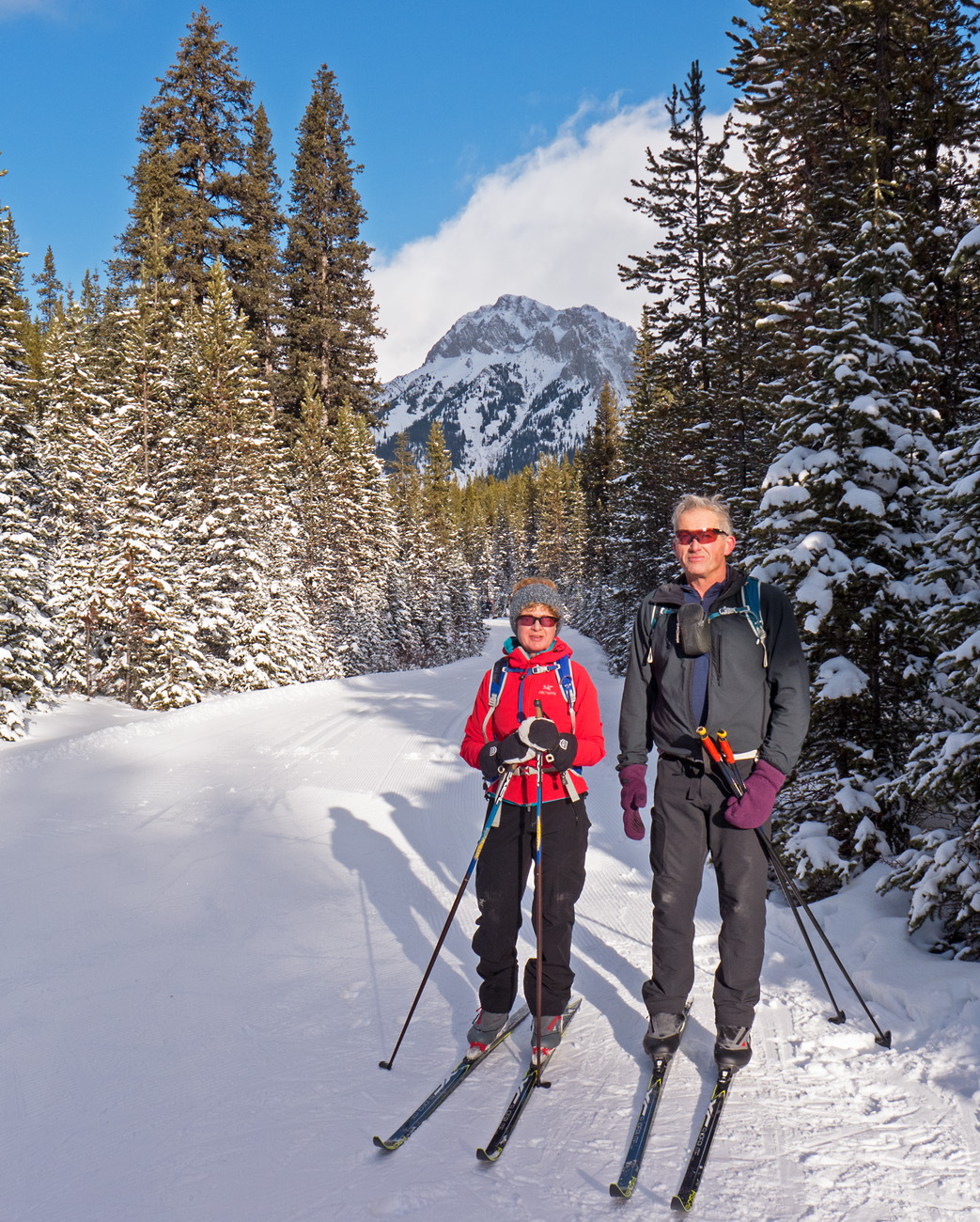 Amazing photos- it looks incredible!
Happy New Year ( very soon) to you both.

Canada is amazing
-----
My favorite part about mornings is greeting every spider that traveled across the trail that night, with my face.
Check out my Video Trip Reports and Timelapse videos!

Beautiful. Thanks for sharing.

Wow that looks beautiful!
You must log in or register to reply here.